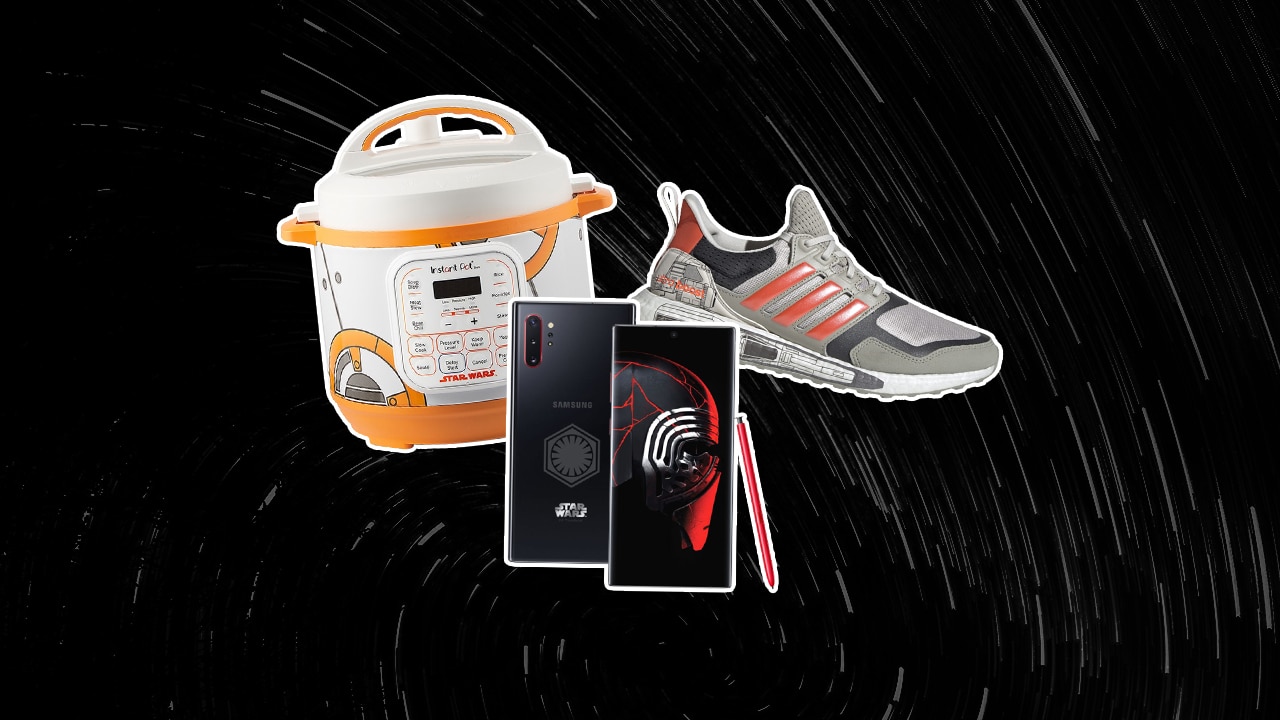 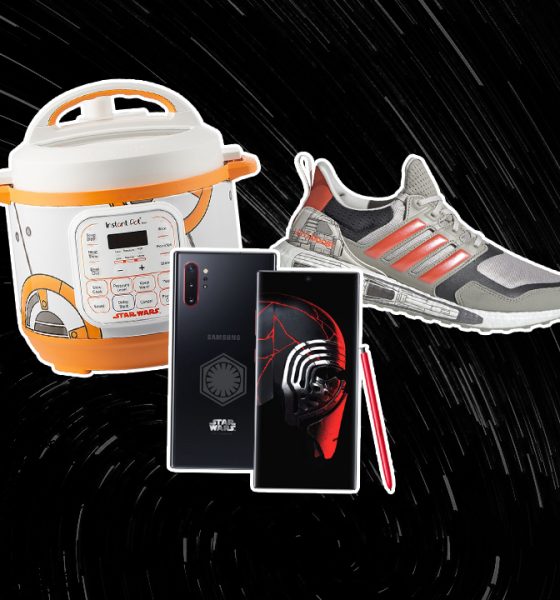 Star Wars: The Rise of collabs with Samsung, adidas

The Force is strong with many brands

Hype for Star Wars Episode XI: The Rise of Skywalker is reaching a fever pitch.

The final installment of the latest trilogy in the pop culture franchise is upon us. With it came a wave of Star Wars collaborations, merch, and everything else in between. Here’s a quick rundown of everything we spotted in no particular order.

adidas: Run with The Force

The Star Wars X Ultraboost 19 running shoes received majority of the hype. Boost is life, after all. This collaboration came in two colorways: The X-Wing and the Millenium Falcon. 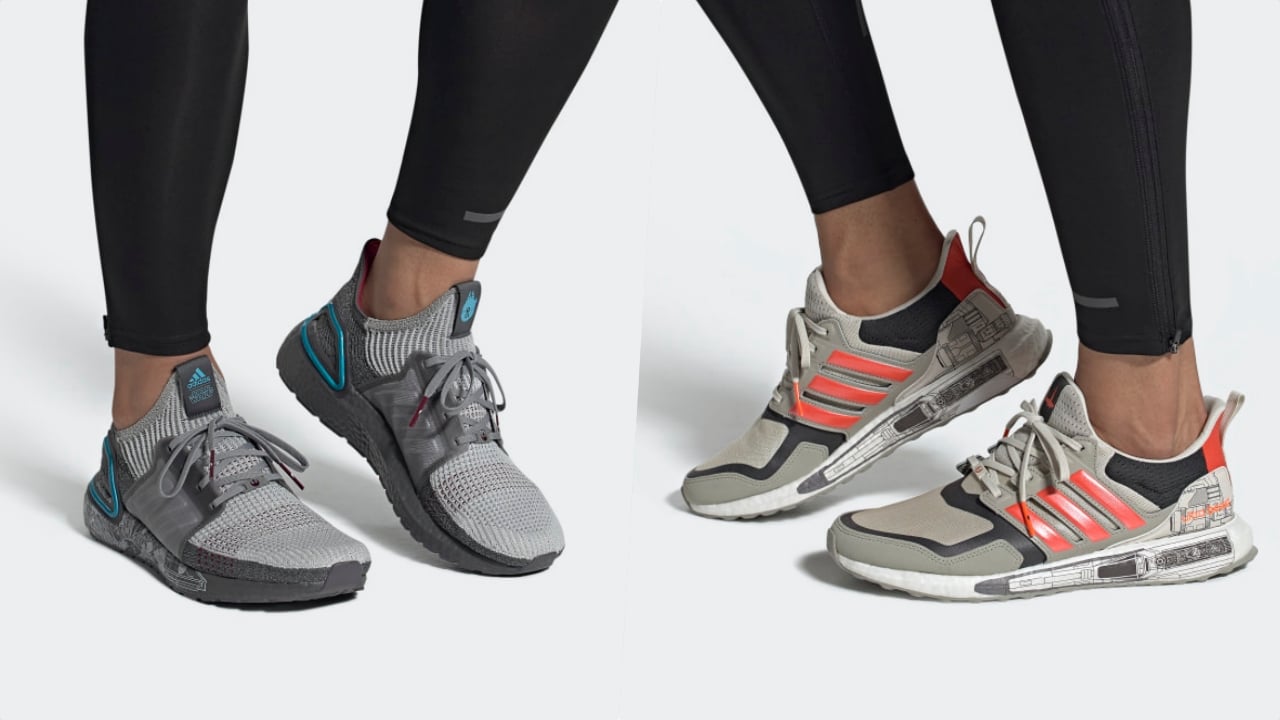 These kicks flew off the shelves so you might have a hard time getting your feet in them but fret not, Adidas actually has a few more Star Wars kicks that mostly flew under the radar.

If you’re looking to do more running you can check out the Nite Jogger with R2D2’s colors, or the AplhaEdge 4D shoe with more subtle Star Wars hints. 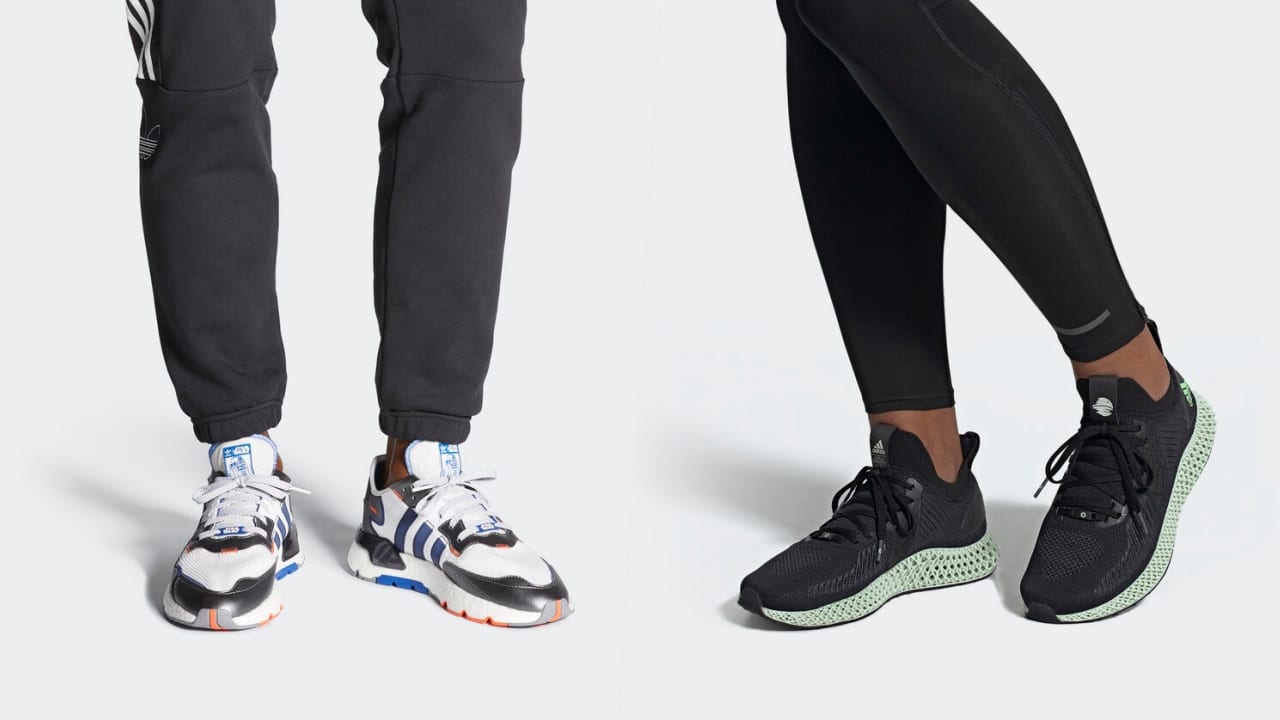 You play ball? The Harden Vol. 4, equipped with the Lightstrike cushioning, comes in the iconic purple lightsaber color. There’s also the D.O.N. Issue #1 Lightsaber blue and the Dame 5 Lightsaber Green. 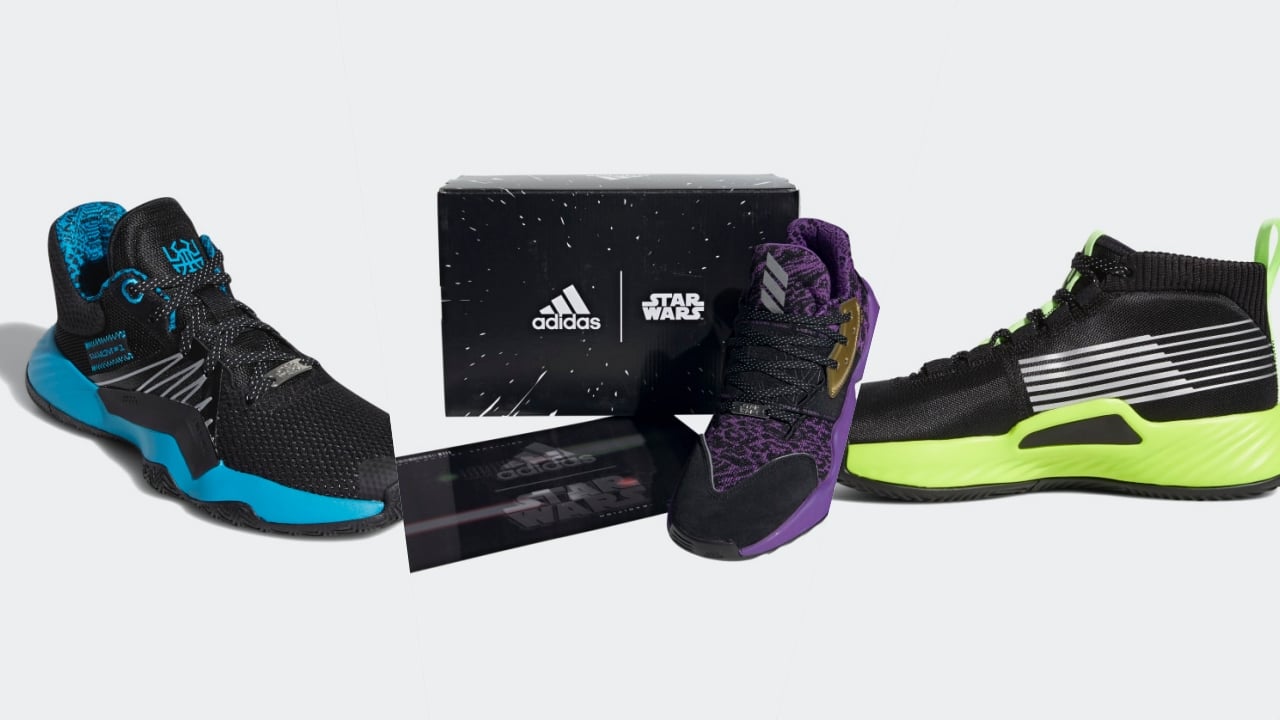 There are also other collaborations with less popular adidas sneakers like the Pro Next 2019 which I copped for myself. Not into shoes? There’s also a bunch of shirts, joggers, and hoodies under the adidas Star Wars collection.

Dark side of The Force infused Samsung Galaxy Note 10+

If you rock with black and red then you’re sure to love the Samsung Galaxy Note 10+ Star Wars Special Edition. Samsung really embraced the Dark Side on this one with the design centered around Kylo Ren — grandson of the iconic Darth Vader. 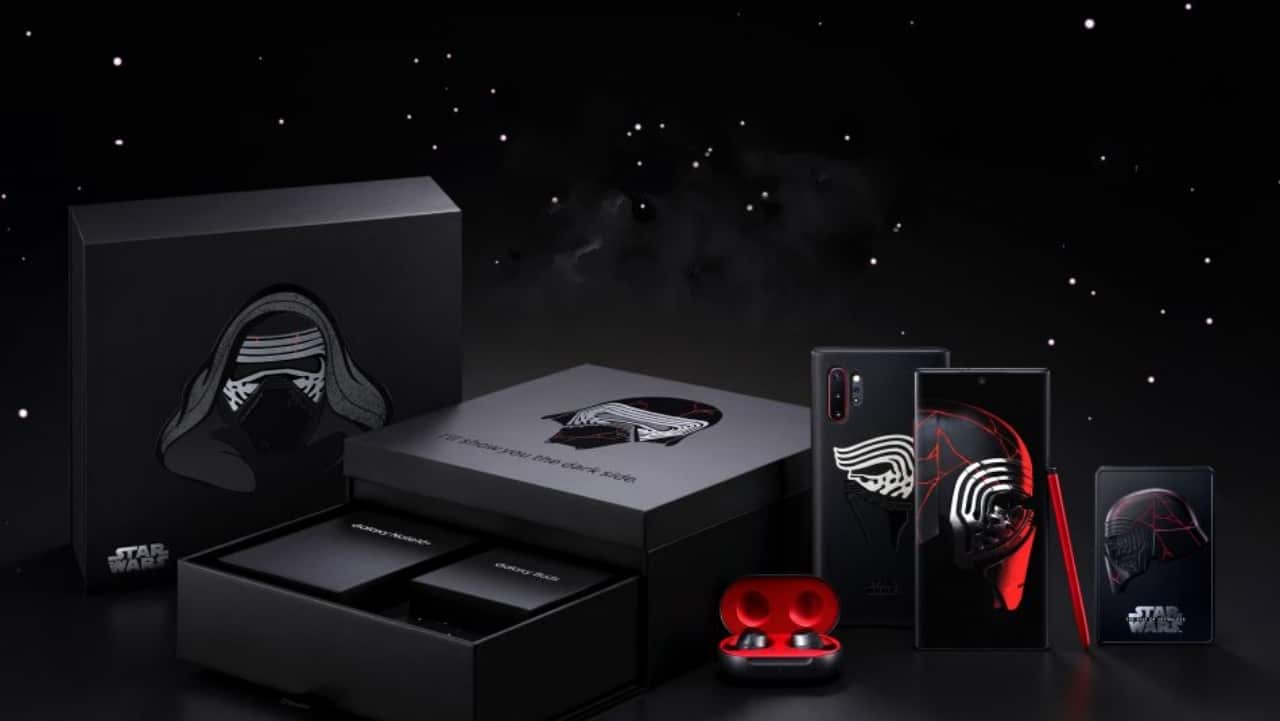 This package also includes the Galaxy Buds and a special case that’s all Kylo Ren-themed.

If you want to live your Jedi dreams there’s a pretty nifty way to do it through a video game. The Star Wars Jedi: Fallen Order action-adventure game came out just a couple of months shy of the latest Star Wars movie.

It received rave reviews from various gaming websites. It’s easily one of the better Star Wars games in very recent memory. The game is available on the PS4, Xbox One, and PC.

This one’s a direct tie-in with the upcoming movie. Facing the plane, on its right is Resistance-themed with blue being the main highlight color. On its left is the First Order with red being the highlight.

The same is true inside with the insignia of the Resistance and the First Order on the plane’s seats. To book this flight, passengers can look up the aircraft’s tail number — N36272. You won’t be jumping to lightspeed but at least you’ll fly in style.

Cook with The Force

Williams Sonoma might not be the first brand you think of when it comes to geek stuff but the cookware company came through for Star Wars enthusiasts.

Available for pre-order right now and hitting stores on December 13 are the following: BB-8 styled Duo Mini 3QT that costs US$ 79.95. Meanwhile the Pot Duo 6QT comes in three variants: Darth Vader, R2-D2, and Stormtrooper. Each one costs US$ 99.95. Finally there’s the Pot Duo 8QT with a Chewbacca look. It’s the largest one and costs US$ 119.95.

The company even promises each one will have a unique custom recipe along with the packaging. These are the Darth Vader’s Beef Stew, BB-8 Shrimp Pasta, Dark Side Deviled Eggs, R2-D2 Rotisserie Herb Chicken, and Chewie’s Chili.

In the Philippines, shoes and apparel brand World Balance also have a collaboration with the Star Wars franchise. They have everything from shoes, shirts, to caps, and bags.

They have an insane collection and can probably dress you up in all Star Wars-themed garb from head to toe.

This one is more in line with the Disney+ Original series Star Wars: The Mandalorian but it’s also Star Wars so I’m putting it here anyway. Baby Yoda is currently challenging Baby Groot as the most adorable baby under the Disney’s properties.

If you want to have him all to yourself, you can do so by copping the baby Yoda Funko Pop. It comes in both the regular-sized Funko and one that’s 10-inch tall. But real talk, a friend says she prefers a baby Yoda plushie. Maybe we’ll get that at some point.

Star Wars: The Rise of Skywalker will be shown on theaters worldwide starting December 20.

3 accessories that should be inside your gym bag 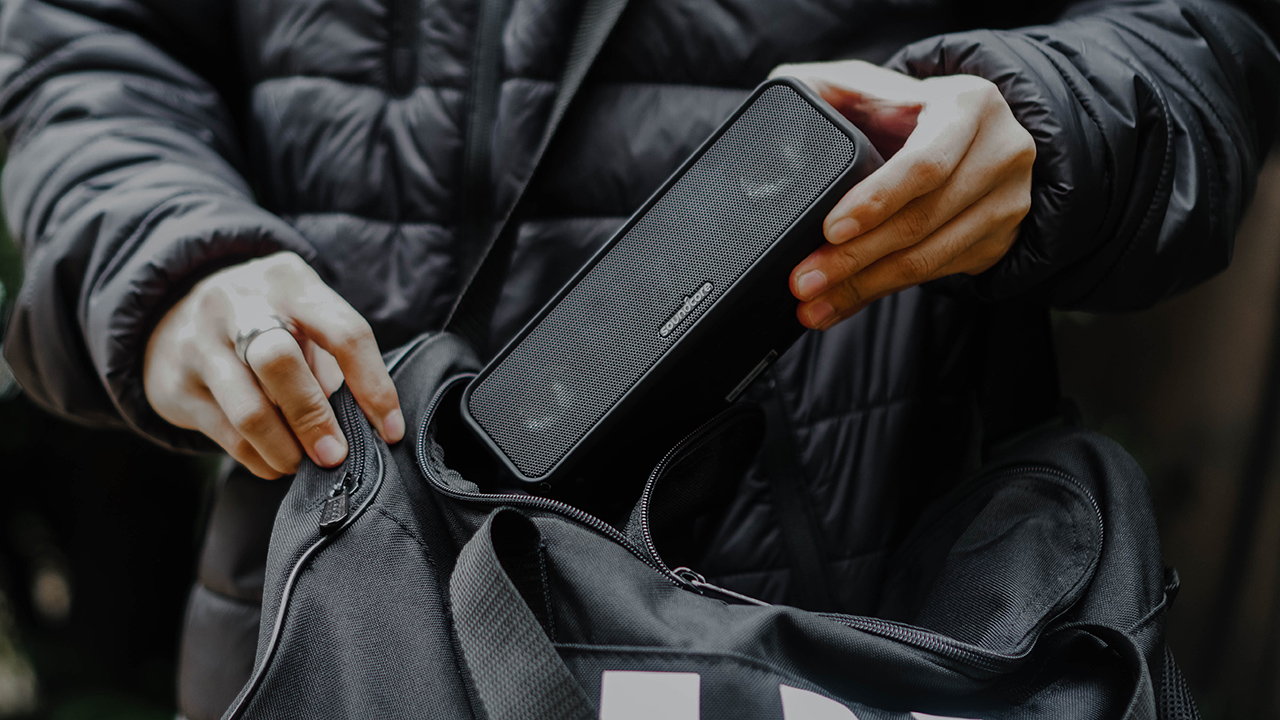 Working out has been a holy grail in my daily life. Even though gyms are closed, I made it a habit to use my gym bag. It made it easier to keep my stuff organized, and it helps with compartmentalizing. I can focus on my workout when I dedicate a space for everything related to fitness.

By now, you probably know the usual essentials that should be inside your bag. Smartphones, smartwatch, resistance band, hand wraps, water bottles, extra clothes, and more.

But I’ll let you in on my little world: I have three mainstay accessories inside my gym bag which I deem essential for my workouts — whether it’s at the gym or at home.

A portable Bluetooth speaker isn’t something I would use at the gym. But on my outdoor workouts and the social distancing imposed in almost every location, I need entertainment that allows me to still be in tune with my surroundings.

This is why the Soundcore 3 has been a great companion that I bring in my routines, especially when I decided not to use my pair of wireless earbuds. 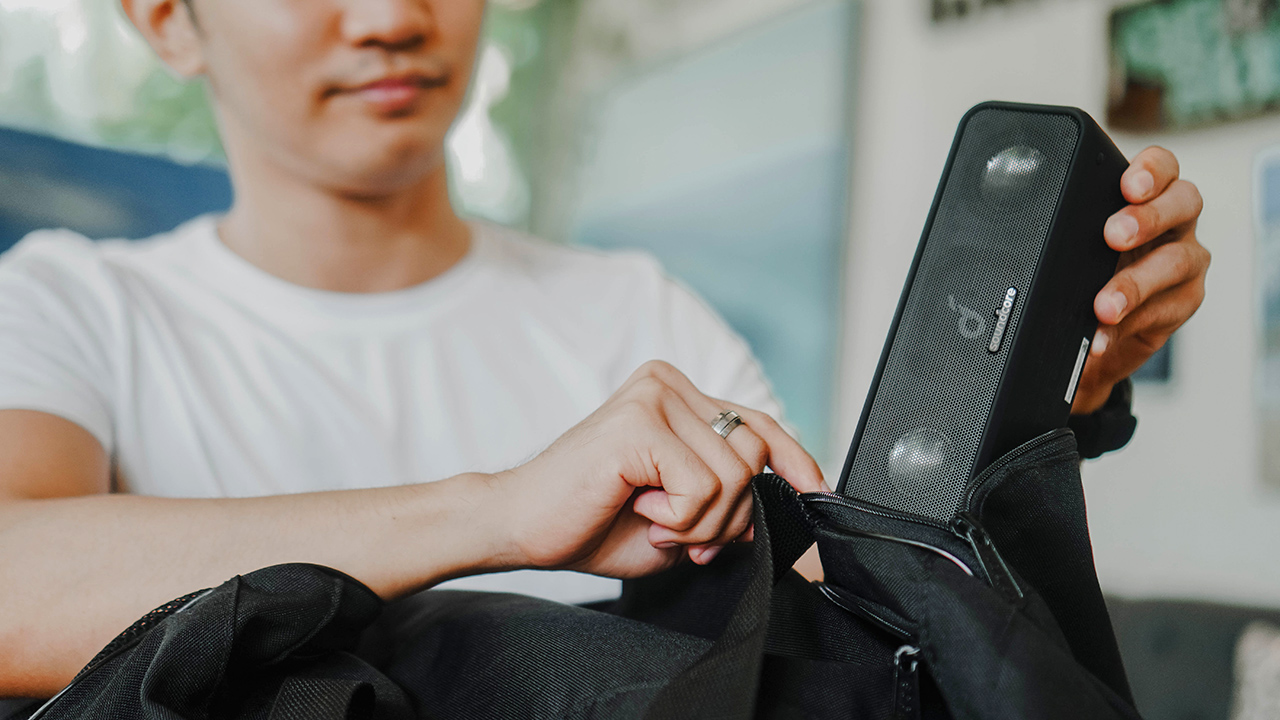 It pumps up the bass even at low volumes, making my cardio exercises a bit more fun. And its dual drivers with pure titanium diaphragms minimize distortion for clearer audio.

The Soundcore 3 also has easy controls and carries a massive battery that gives you 24-hour playtime. Yes, my dear friend. You can listen to more than 400 songs on a single charge.

But what I like about it the most is its IPX7 rating. It gives me peace of mind when I hold the speakers with my sweaty hands or when I work out in the rain. And because I can bring it to the shower whenever I practice my dance moves.

Another mainstay in my gym bag is an ultra-compact power bank from Anker. Called Powercore 5000, this power bank slides easily in your pocket (or your bag’s pockets). With 5000mAh capacity, it can recharge either my phone or my Soundcore 3 whenever I take a rest. 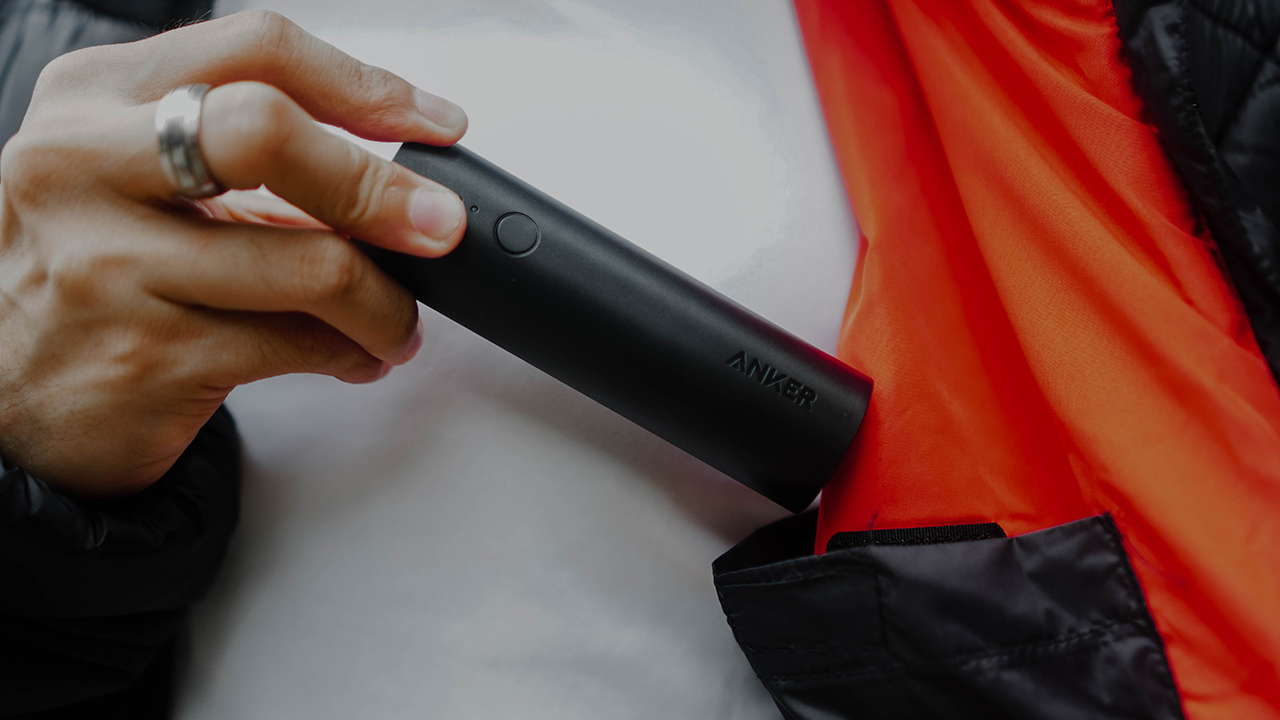 It does not support Qualcomm’s Quick Charge, but it still sports an exclusive PowerIQ technology so you can still experience high-speed charging for your gadgets.

Nonetheless, it comes with a travel pouch so you can keep your power bank safe, a MicroUSB cable for connectivity, a welcome guide, and a worry-free 18-month warranty.

I like being prepared and ready at all times. This is why even a cable was able to count as a mainstay in my bag. Anker’s Powerline 3-in-1 is a handy accessory since it has interchangeable connectors — Lightning, Micro USB, and USB-C. 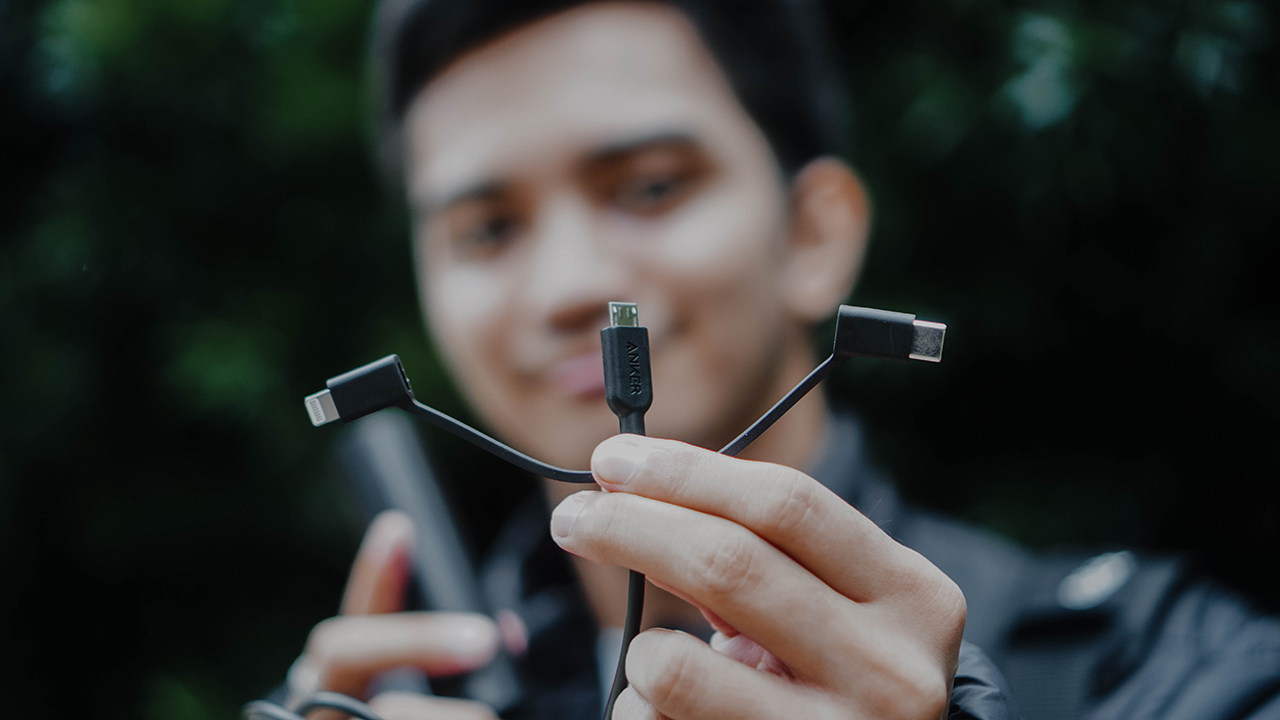 It makes it easier to charge several devices that have different ports, without carrying multiple cables that would probably populate my organizers. Luckily, the Powerline 3-in-1 keeps the internal wiring protected so I don’t have to worry about replacing cables anytime soon.

Plus, it has an MFi certification from Apple so it charges fast and safe — which I lend to my friends that use an iPhone, who for some reason, always forget to carry their own cables. 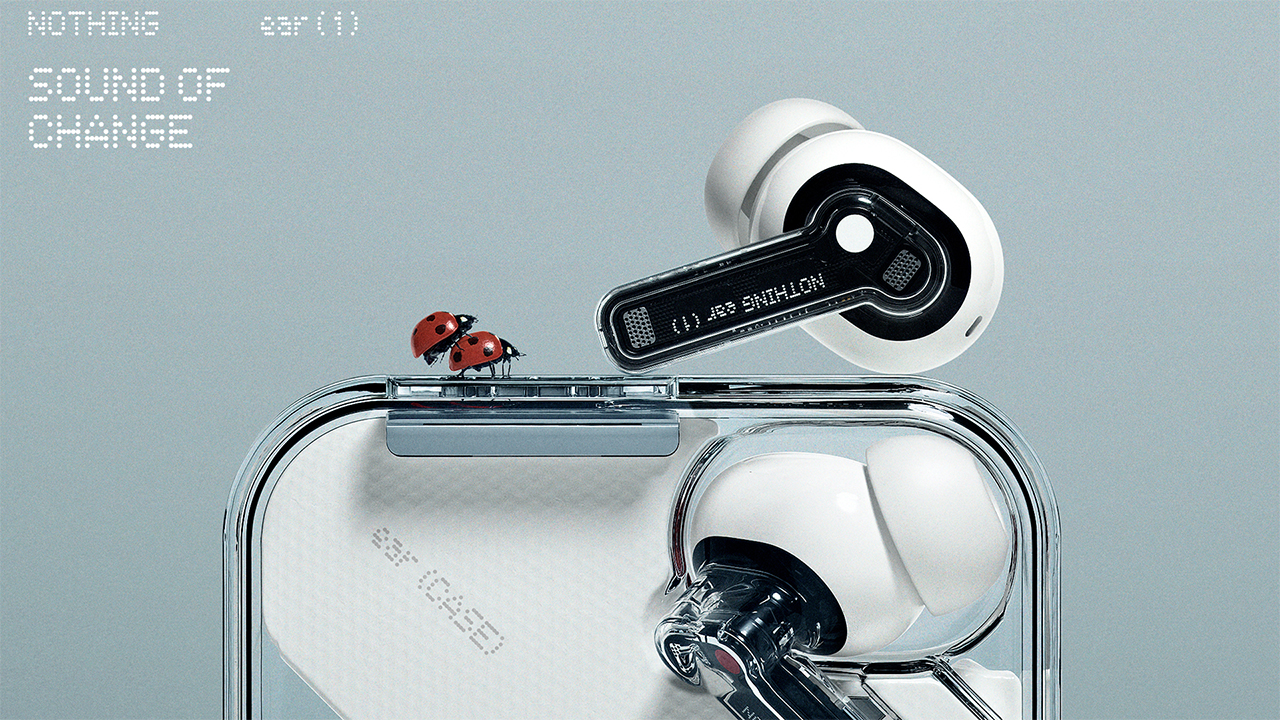 Over the past few months, OnePlus co-founder Carl Pei kept teasing his brand-new venture after leaving his previous company behind. The new venture, Nothing, promised interesting and innovative products for the audio segment. Because of the teases, we already know a lot about the company’s first product: the ear (1). Now, it’s time for the main course.

Nothing has officially launched the ear (1) for markets worldwide. As depicted in official product photos, the wearable will feature a semi-transparent chassis and charging case. It will have pressure-relieving vents and customizable silicone ear tips.

Besides the default Transparency mode, Light mode, as the name suggests, is a more moderate form of noise cancellation which lets some noise in. It’s perfect for when you still need to be aware of your surroundings like during commutes. On the other hand, Maximum mode blocks in all noise for when you’re in very busy environments.

For connectivity, it will support Bluetooth 5.2 for seamless connections with your device. It comes with an ear (1) app which includes features like Find My Earbud, an equalizer, and a gesture control menu.

As teased before, the charging case will indeed have 24 hours of battery life (and more). It will supposedly have 34 hours of charge. Each bud will have 5.7 hours of listening time and can charge to full in only ten minutes with the case. The case charges wirelessly and can be charged with any Qi charger.

The ear (1) will retail for GBP 99. A limited drop will open on July 31 through nothing.tech. Official sales will begin on August 17.

SEE ALSO: Carl Pei’s Nothing intends to raise $1.5 million from the community 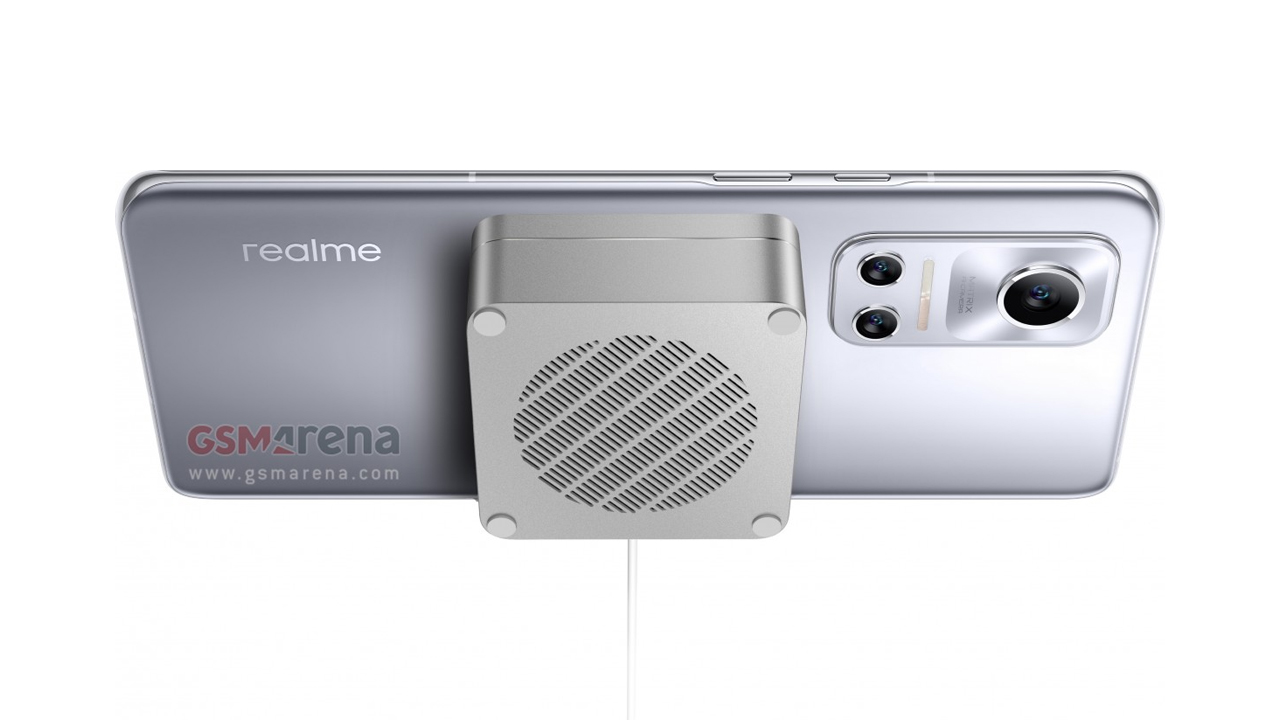 Wireless charging is making a huge push. Last year, Apple resurrected the MagSafe system, opening up the magnetic charging solution for iPhone users. However, If you’re from the other side, you’re likely wondering when Android is getting its first magnetic charger. Well, wait no more. realme has officially teased an upcoming magnetic wireless charger.

Leaked by GSMArena, the company will launch the realme MagDart will work like Apple’s MagSafe charger. However, according to the leaked render, the charger is larger than Apple’s charger.

The report does not spoil the exact hardware inside the charger, though. However, it does indicate that the charging power will be more powerful than 15W of wireless charging. realme also promises that the magnetic charger will be the fastest once it launches soon.

To coincide with the charger’s upcoming release, realme is also launching the first compatible smartphone: the realme Flash. Not much is known about the upcoming phone, but it is touted as “the first Android smartphone” that can support the charging solution.

Besides the charging solution, the company is likely launching a flurry of accessories to go along with the magnetic system. Apple has, of course, used the MagSafe system to add in other accessories for iPhone users.