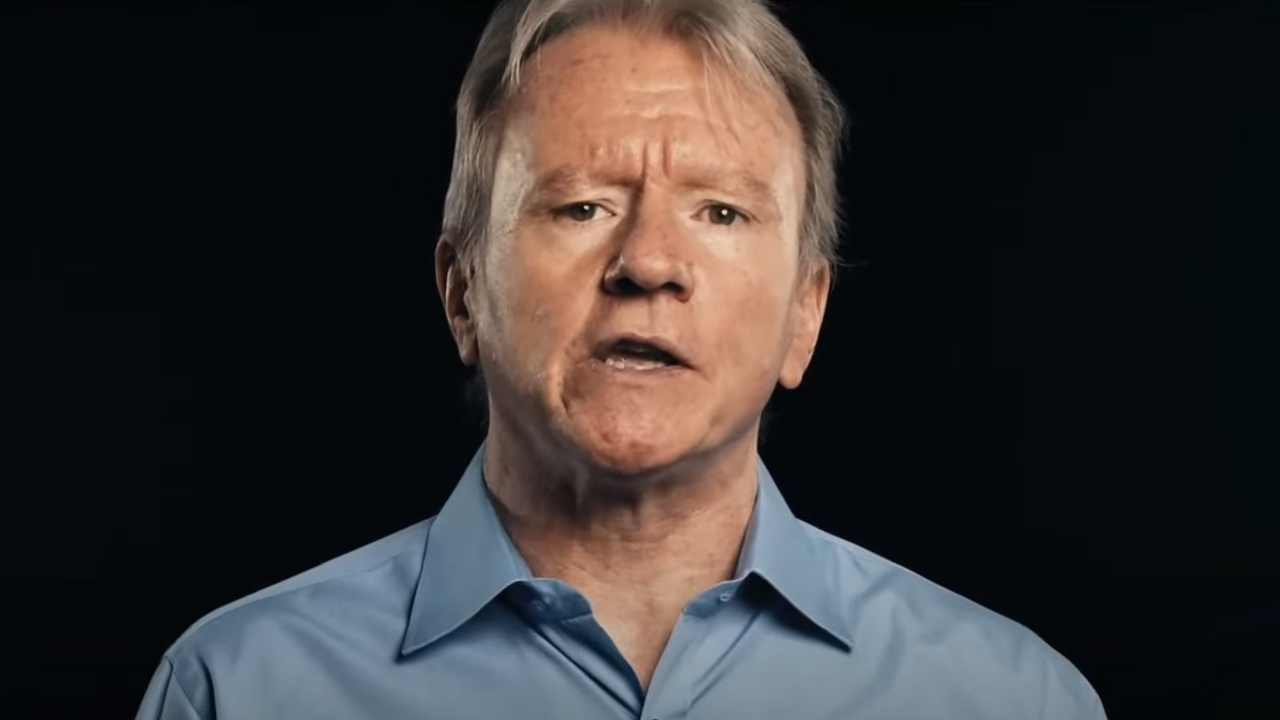 Yesterday, Sony unveiled the much-awaited PlayStation 5 along with an enormous slate of hype-inducing titles. However, instead of fawning over Miles Morales or Aloy, a significant number of fans are more concerned about the show’s presenters.

Before the high-profile trailers yesterday, their respective developers got on camera to talk about what they were proud to present at the moment. The introduction is, of course, commonplace for in-person conferences. However, people have pointed out that the presenters look odd, calling them CGI creations off the bat. The strange conspiracy theory gained enough traction on both Facebook and Twitter.

The proof? Apparently, the theory’s believers are homing in on a disclaimer shown at the beginning of the online event: “All game footage you are about to see from this point forward in the show has been captured from PlayStation 5 systems.” Conveniently, the theorists glance over “game” in “game footage.” Further, theorists claim that the presenters looked strangely out of place with odd lighting and exaggerated movements.

As we’ve seen in a recent Unreal Engine tech demo, the PlayStation 5 is completely capable of rendering hyper-realistic imagery. Are we looking at the rendered future of tech presentations?

The answer is a resounding no. According to Sony’s statement provided to Polygon, the presenters are 100 percent human and “were all taped at home.” The publication also speculates that the odd lighting anomalies likely came from background post-processing done to maintain a semblance of uniformity, much like how you can change your background on Zoom calls.

Still, the presenters’ identities seem like an odd thing to focus on. Regardless of whether they were rendered or not, the PlayStation 5 looks like a beast that we can’t wait to get our hands on.

SEE ALSO: Sony finally reveals what the PlayStation 5 looks like

Along with exclusive single-player content for Season Pass owners 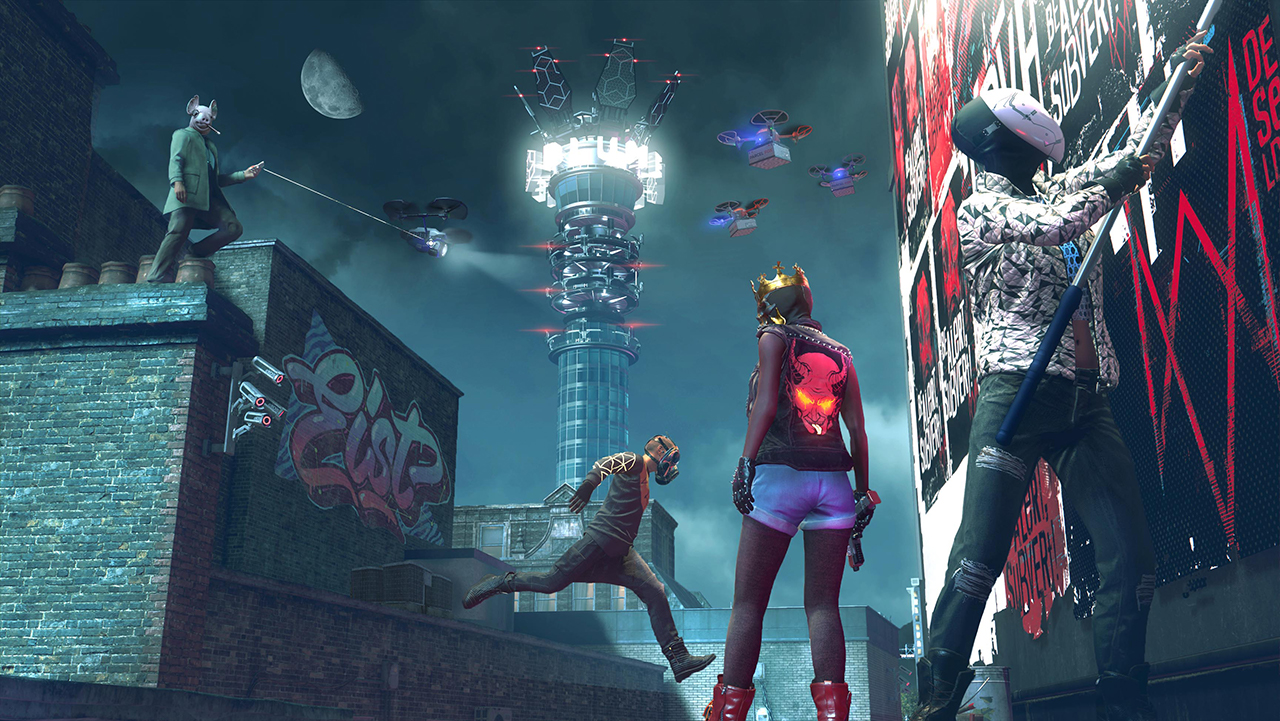 Ubisoft’s Watch Dogs: Legion was the latest open-world offering from the company released in October 2020. The entire game peers into the realm of technological London, some time since Brexit happened. As such, you take command as any normal citizen of London but as a member of DedSec, a group of hackers fighting against authoritative regimes. Overall, the game received mixed reviews due to its uncanny yet vivid storytelling and gameplay.

As such, Ubisoft continues to improve on its product through the addition of new player-friendly features. Starting March 10, players will now have a chance to play with their friends through a dedicated Online Mode. The addition of this new mode comes with the free update patch set to be released on that day, along with several freebies for Season Pass owners. 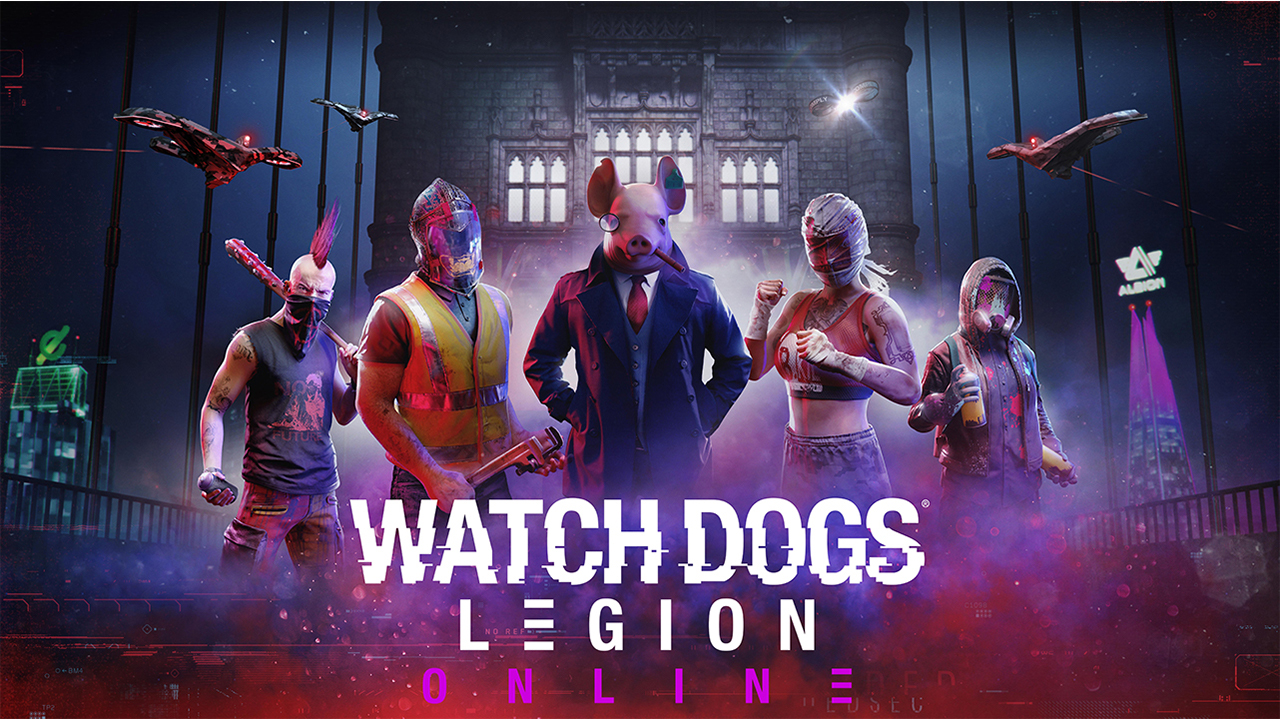 With the new Online Mode, you now have access to a slew of co-op missions and environments to explore. As such, players can assemble teams of two to four to complete more challenges and explore the rest of London. More co-op features that comes with Online Mode include the “Leader of the Pack” missions and a PvP deathmatch mode.

Along with Online Mode, the new patch also comes with unique single-player missions for Season Pass owners. Watch Dogs: Legion is available now for the PlayStation 4, PlayStation 5, Xbox One, Xbox Series X|S, and PC through the Epic Games or Ubisoft Store. 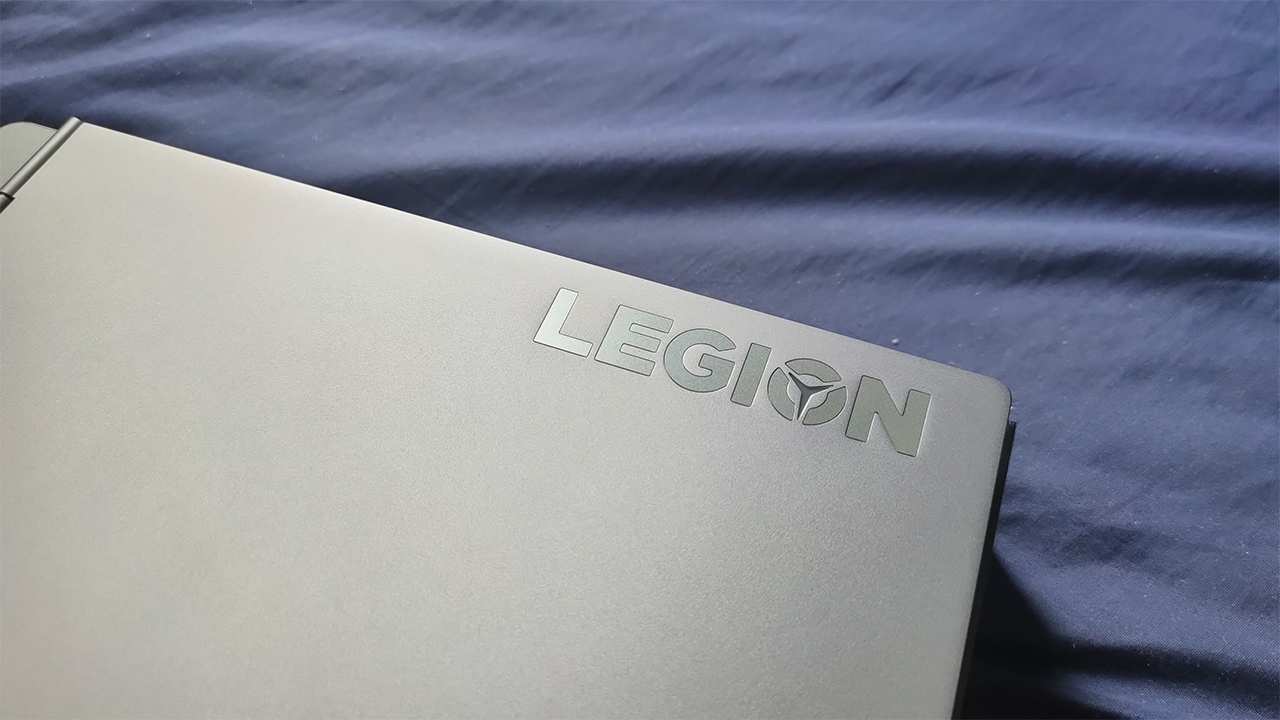 A few months ago, I took a look at the Lenovo Legion 7i, which was one of Legion’s top gaming laptops when it was released. In my opinion, it had the hardware to rival its contemporaries — even in the RGB department, but some things got in the way. A few months later, a slimmer option arrived into the market.

The Lenovo Legion Slim 7i, on paper, doesn’t particularly change a lot of things from its bulkier counterpart. It still comes in a similar build design, roughly the same set of hardware (with a GPU change), and less RGB. Even on this device, there are less ports to plug in your peripherals and it has the same cooling setup.

So, is this laptop really any different? For starters, here’s what you’re getting with the Legion Slim 7i: 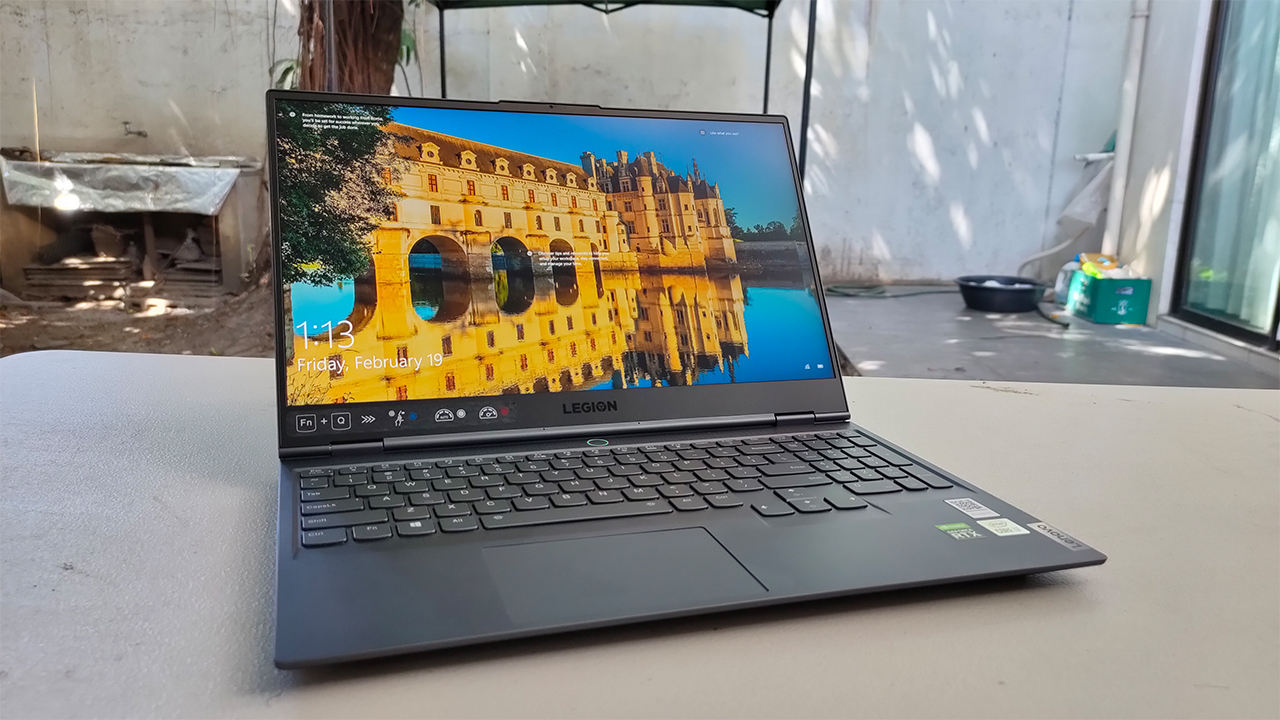 It comes with an NVIDIA RTX 2060 Max-Q inside 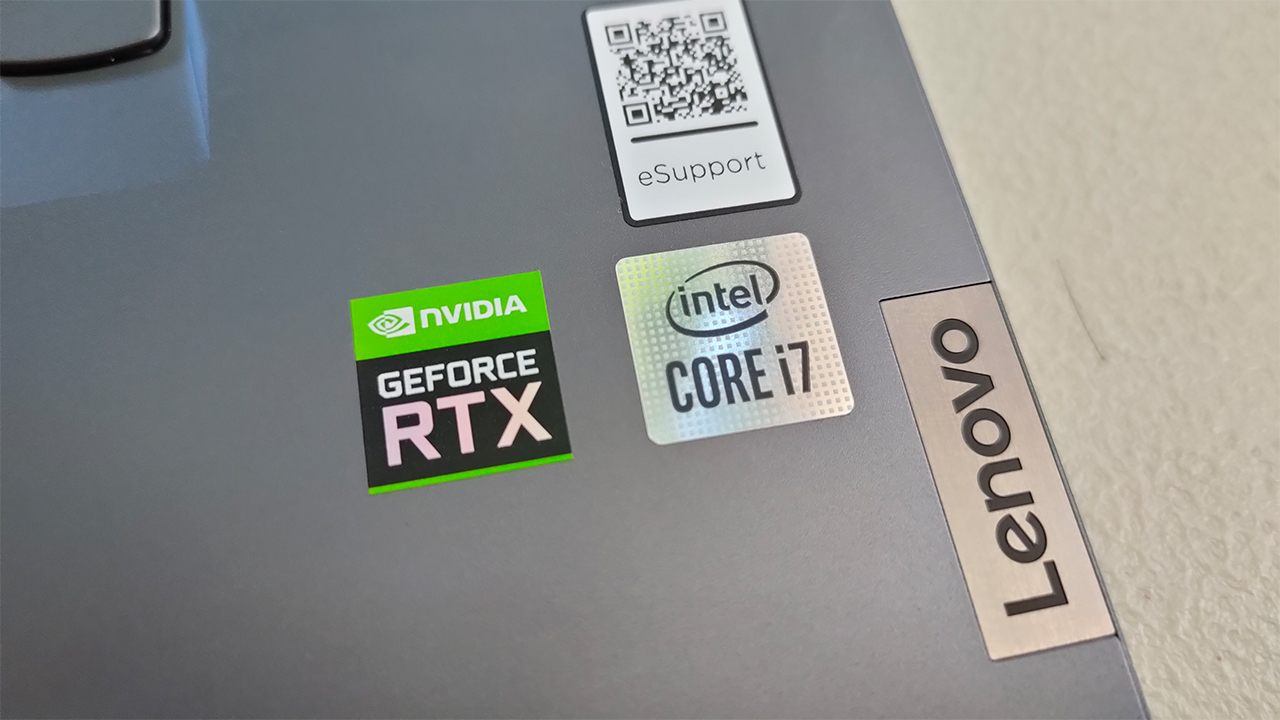 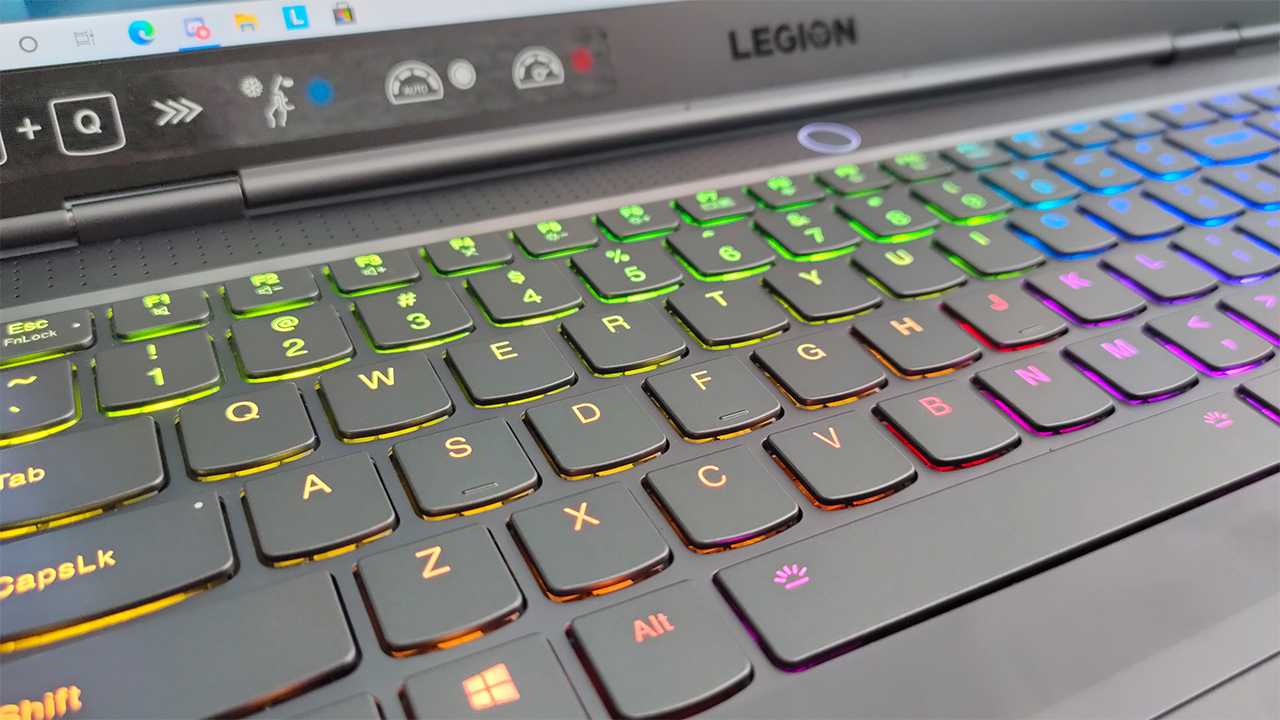 It only comes in a Metal Gray colorway 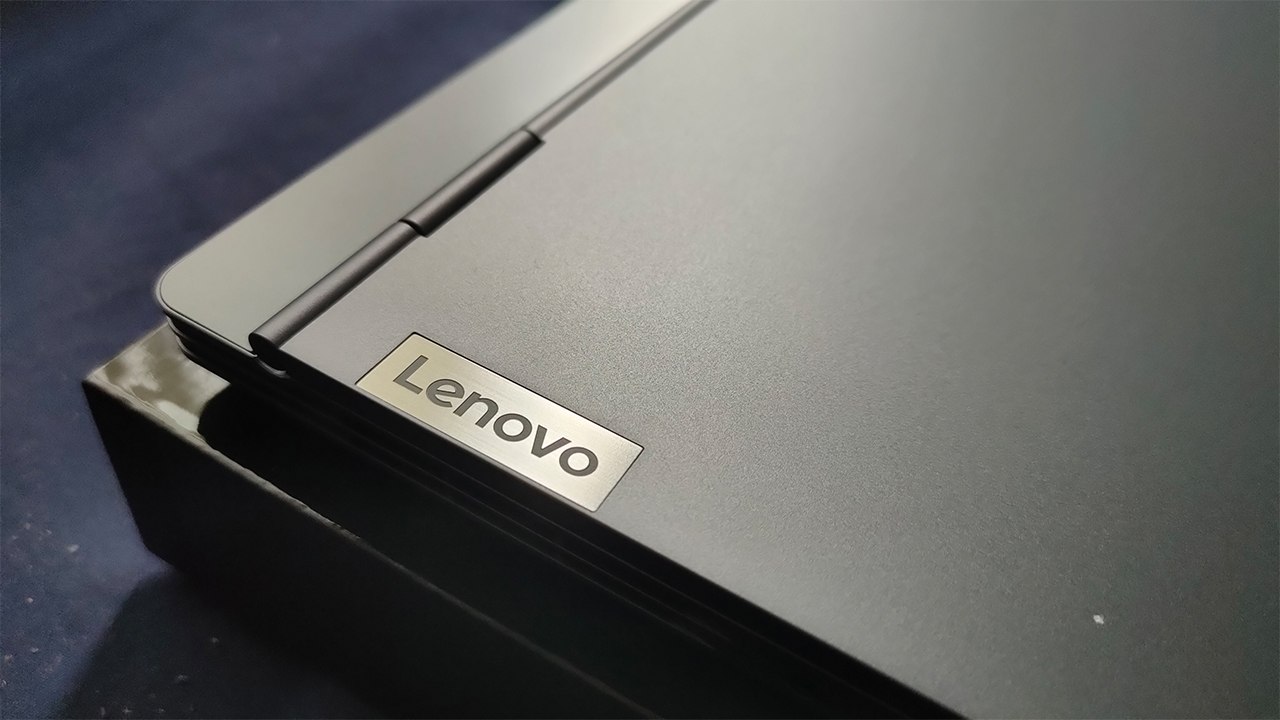 Handy-dandy performance for the chill times

This device comes with a 10th generation, Intel Core i7-H processor inside, with 16GB of RAM to boot. For every other thing you can possibly do with this device, it obviously stacks up pretty well. From social media browsing and doing some presentations to watching True Beauty and playing games casually, it just worked smoothly. 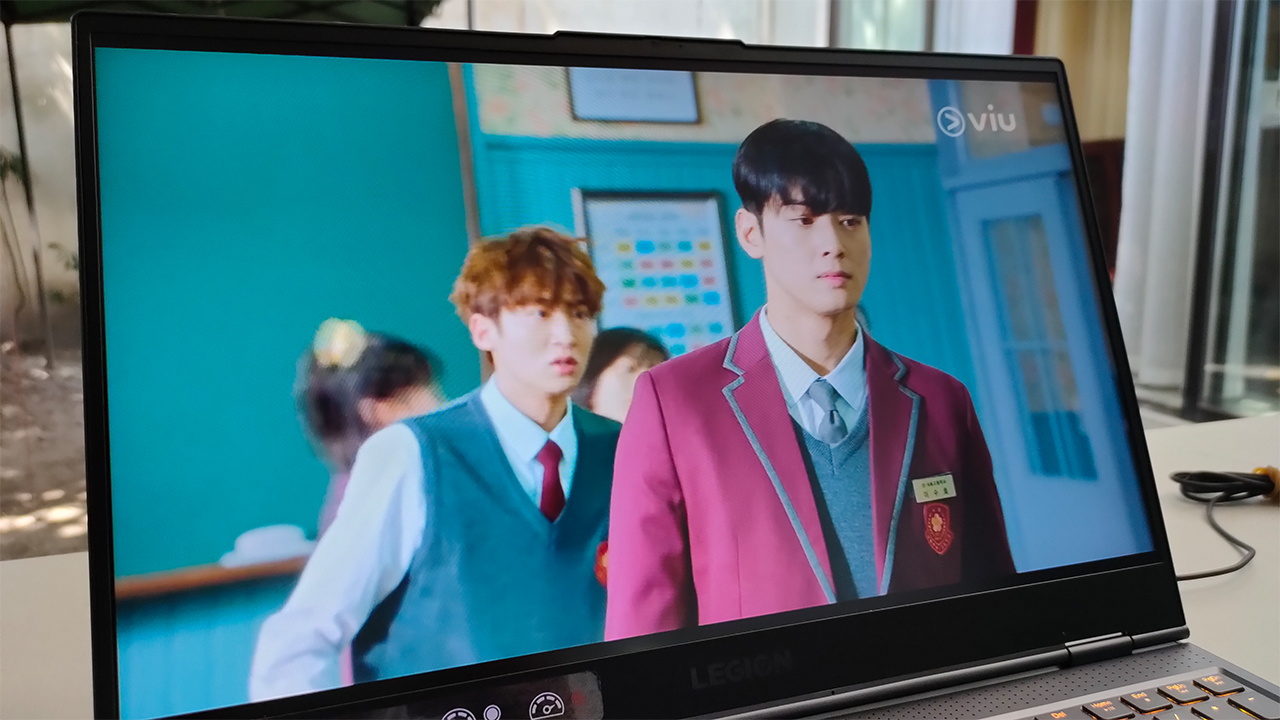 As far as photo and video editing goes, the NVIDIA RTX 2060 Max-Q helps out quite a lot. Along with a 144Hz refresh rate, anti-glare display, I was able to take the work outdoors without having to reach for shade. Render times were just around how I expected them to, clocking in at around 40-50 minutes for 5 minutes of gameplay.

Now that I’m looking back at how the Legion 7i was, I couldn’t see or feel any difference in this regard — and that’s a good thing. Even in a much slimmer chassis and less RGB, the hardware held up pretty well for anything you throw at it. Honestly, it’s something I love to see when brands scale it down without sacrificing performance.

Much like the Legion 7i, this is a gaming machine after all, and the hardware certainly had its work cut out for it. While I threw some casual games in there, I also wanted to see how well it handles competitive titles especially for 2021. Surely, the Legion Slim 7i didn’t disappoint even with an RTX 2060 Max-Q:

Now to be fair, I wasn’t expecting full 60 FPS when trying to run Cyberpunk 2077 on this GPU. However, with RTX on, it was a great lighting experience to have through and through. For the rest of the games, I honestly felt no drops in frame rates even with longer play times.If there were any drops, it’s probably my internet’s fault. 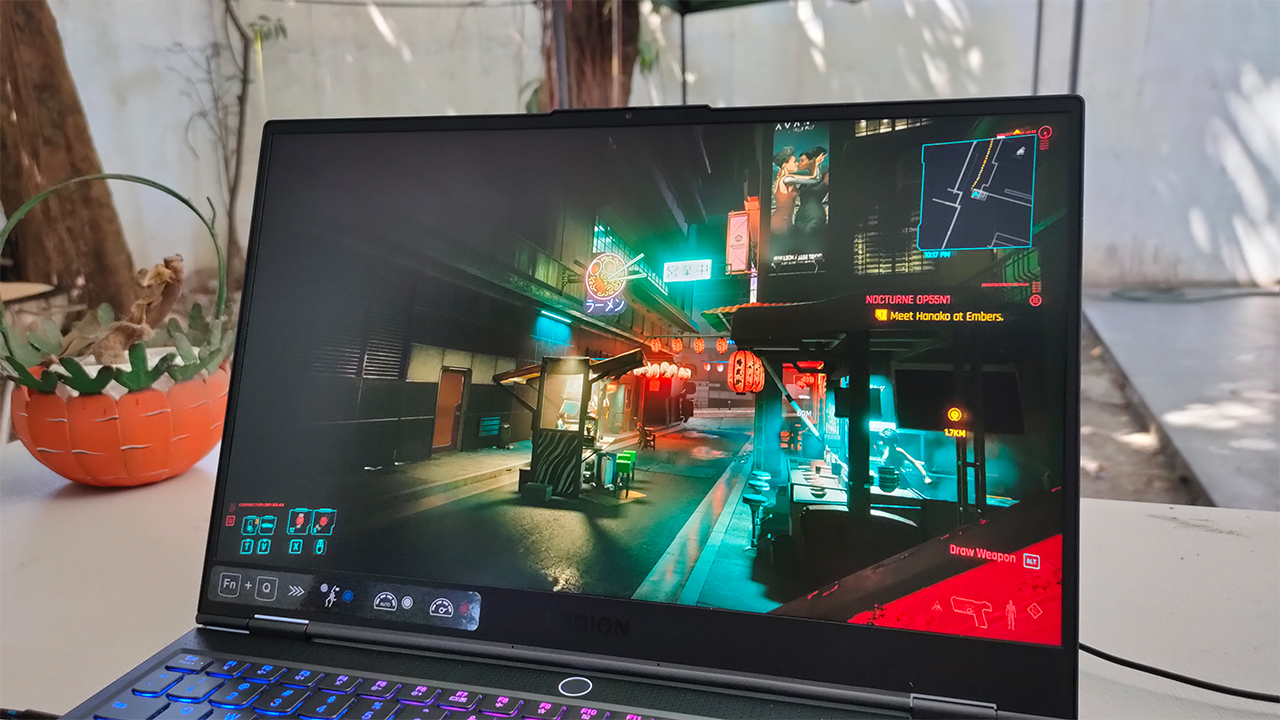 For more competitive titles, it brings a ton of power to the table. I’m seeing above 200 FPS for games like VALORANT, CS:GO, and even Rocket League (given the frame rate cap at 259 FPS). I felt that this device surely provides the performance necessary for Esports players to compete at a high level.

Improved cooling in some areas

Another improvement I noticed between the Legion 7i and Legion Slim 7i was in how the device remained cooled down. Unlike the Legion 7i, this device doesn’t come with a Vapor Chamber cooling system. Instead, it makes use of Lenovo’s Coldfront cooling system with the four exhaust points at the rear end of the laptop. 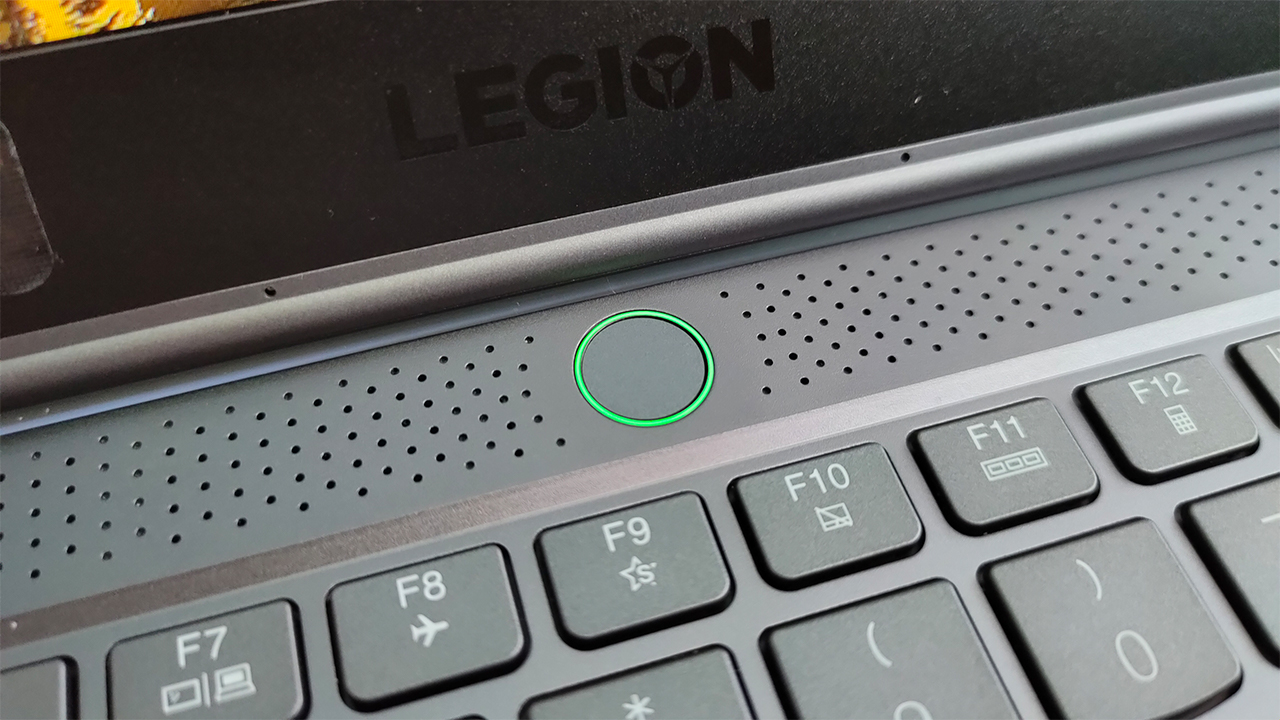 Power button with an LED indicator for different fan modes; usually, the first part that feels a ton of heat during gameplay

Throughout my entire usage of the device, I still felt some uncomfortable levels of heat when playing for longer hours. However, it takes a little longer to warm up unlike the Legion 7i, which is a big improvement all things considered. Plus, it cools down a little faster after you exit the game so you can proceed with work as you please.

However, it doesn’t necessarily reduce the amount of noise the fans produce under Performance Mode. In fact, during gameplay, I felt the fans blasting out more air on this device than the Legion 7i. So, I honestly believe it would have helped to ship this device with a dedicated set of headphones to cancel out the noise. Trust me, the fan noise is a little distracting.

Of course, one of the expected disappointments with gaming laptops involves the battery life. With the Legion Slim 7i, I got about six hours using it normally — you know, social media, Netflix, and just gaming on it casually. When you game full time (and you want frame rates above 60 FPS), I was looking at about an hour and 45 minutes before it lost all power.

Charging the laptop didn’t take too long, as it took me about an hour and 35 minutes with Rapid Charge on. Obviously, the upside here is that you can get back to your work or your game quickly. Still, with such an abysmal battery life, I’d rather bring the charging brick around.

For PhP 99,995, the Lenovo Legion Slim 7i poses nothing spectacularly different from its bulkier predecessor. It manages to provide highly effective and flexible performance for work and play. Plus, it manages to remain a little cooler than the bulkier Legion 7i. If you think it’s a bad thing that it’s not that different, it isn’t. 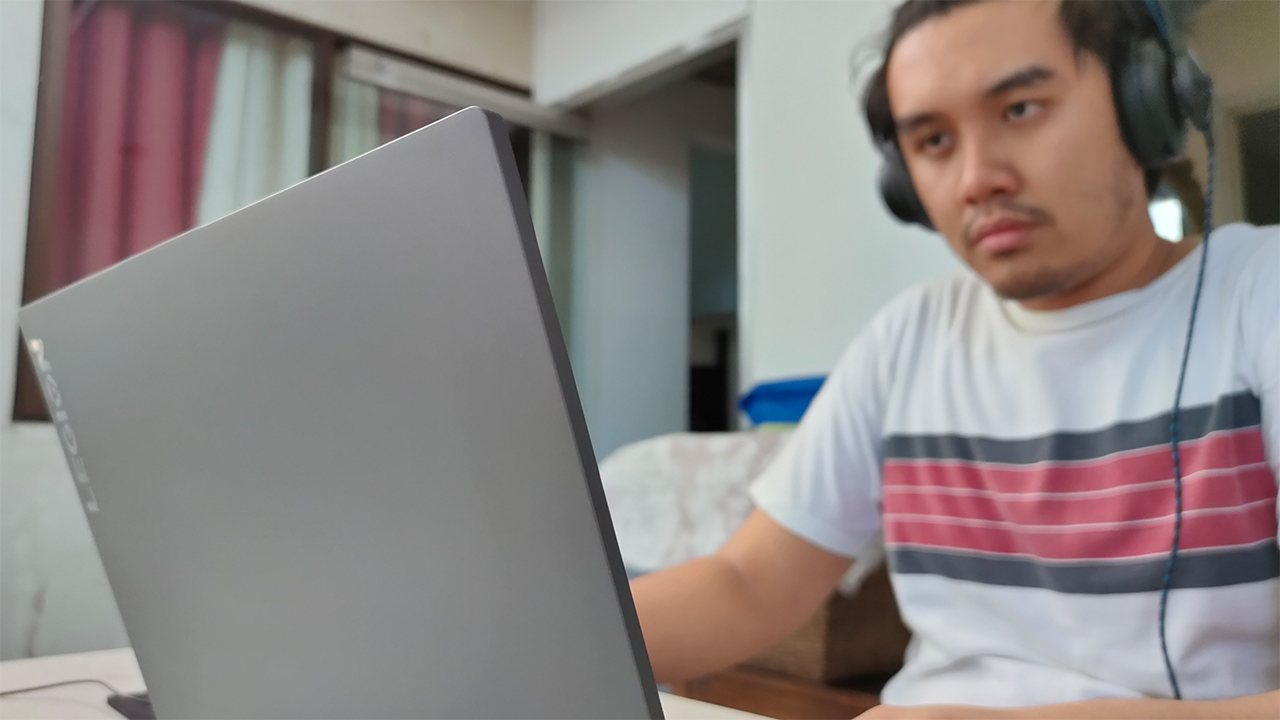 Of course, there are things that would drive you away from this gaming device like the short battery life. I could even argue that the loud fans blasting out air is a nuisance when trying to play well. Looking past these, however, you still get a gaming device that’s certainly worth your hard-earned money

It isn’t as flashy, nor as colorful, but the Legion Slim 7i gives you power in a lighter form factor. How light can this device go? Apparently, just light enough but just as powerful!