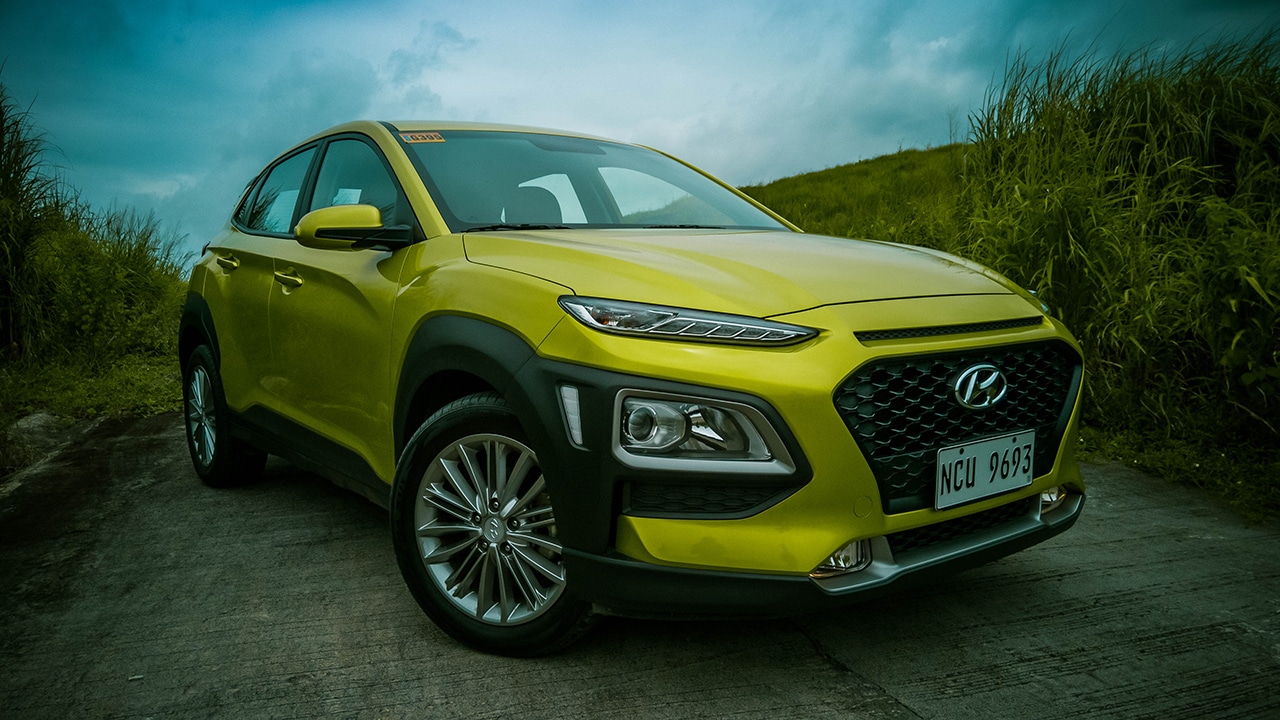 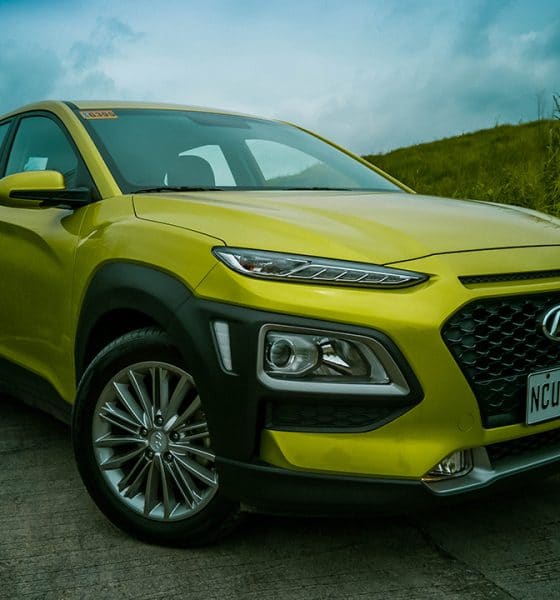 Is it a crossover? Is it a hatchback? Is it an APV? I, too, was confused when I first laid eyes on the 2019 Hyundai Kona. It was one of a kind, unique from any segment I was familiar with. 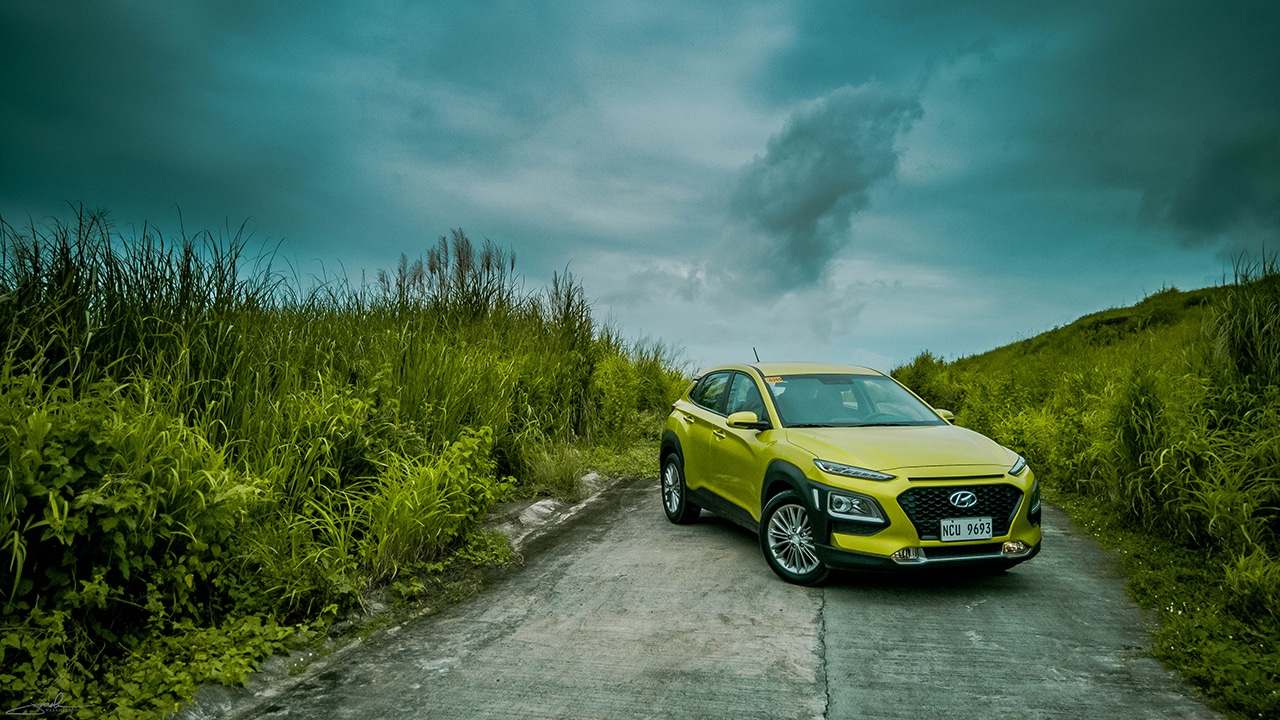 In line with the Mazda CX3 and Honda HRV, the Kona is a subcompact crossover SUV.

This vehicle is a true head-turner. I highly appreciate car companies whose designs are bold and thought of outside the box. In short, designs that make a statement.

The sleek and futuristic look of the Kona is best complemented in the flagship color Acid Yellow that gave my child-like imagination the impression of a glowing radioactive spaceship. 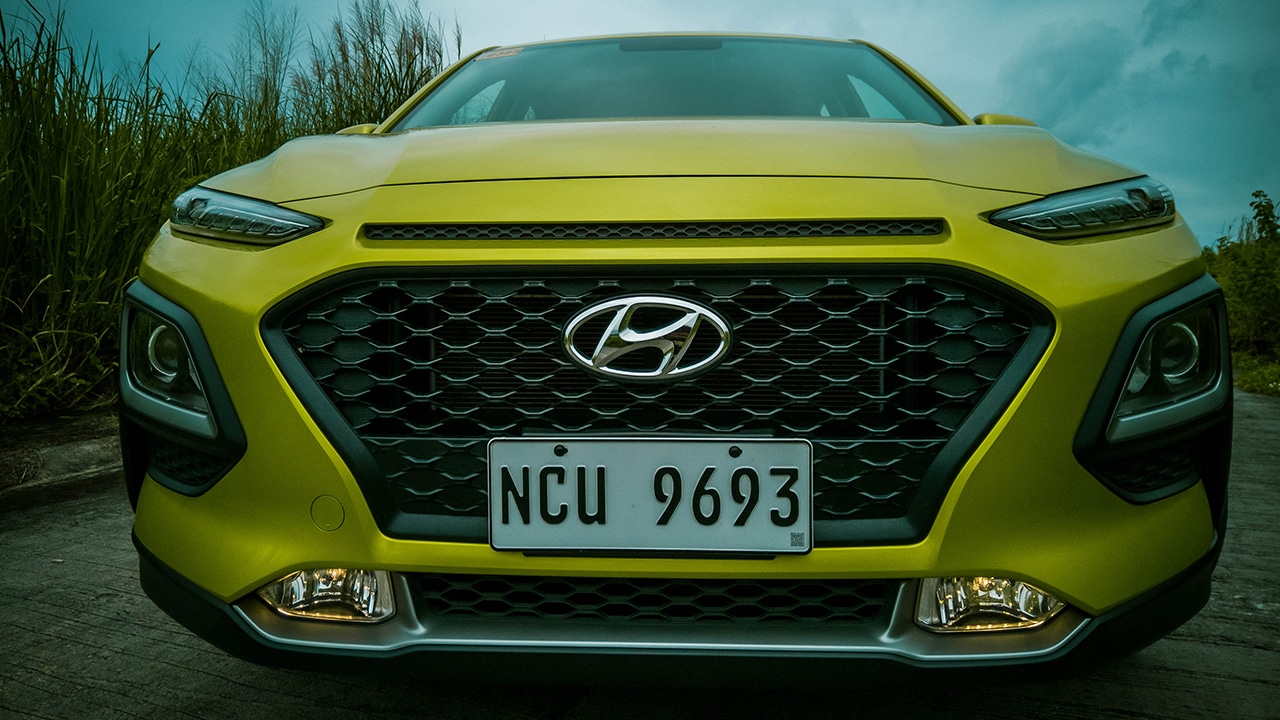 From the front, its fascia is exciting and modern in style with the growing trend of separated headlight design (like the Nissan Juke), streamlined daytime running lights, and low set fog lamps all go together with Hyundai’s trademark grille design. 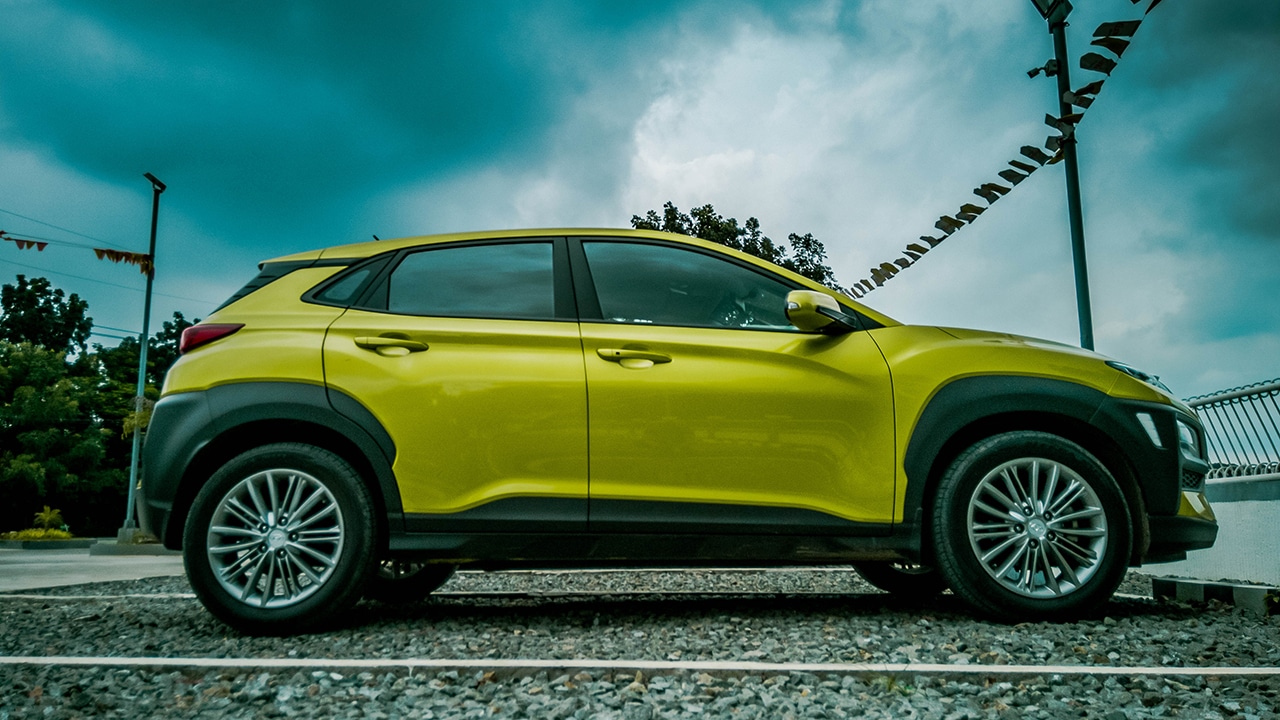 Side profiles are matched with dynamic character lines as well as accents of matte black plastic cladding around the wheel arches and rocker panels. 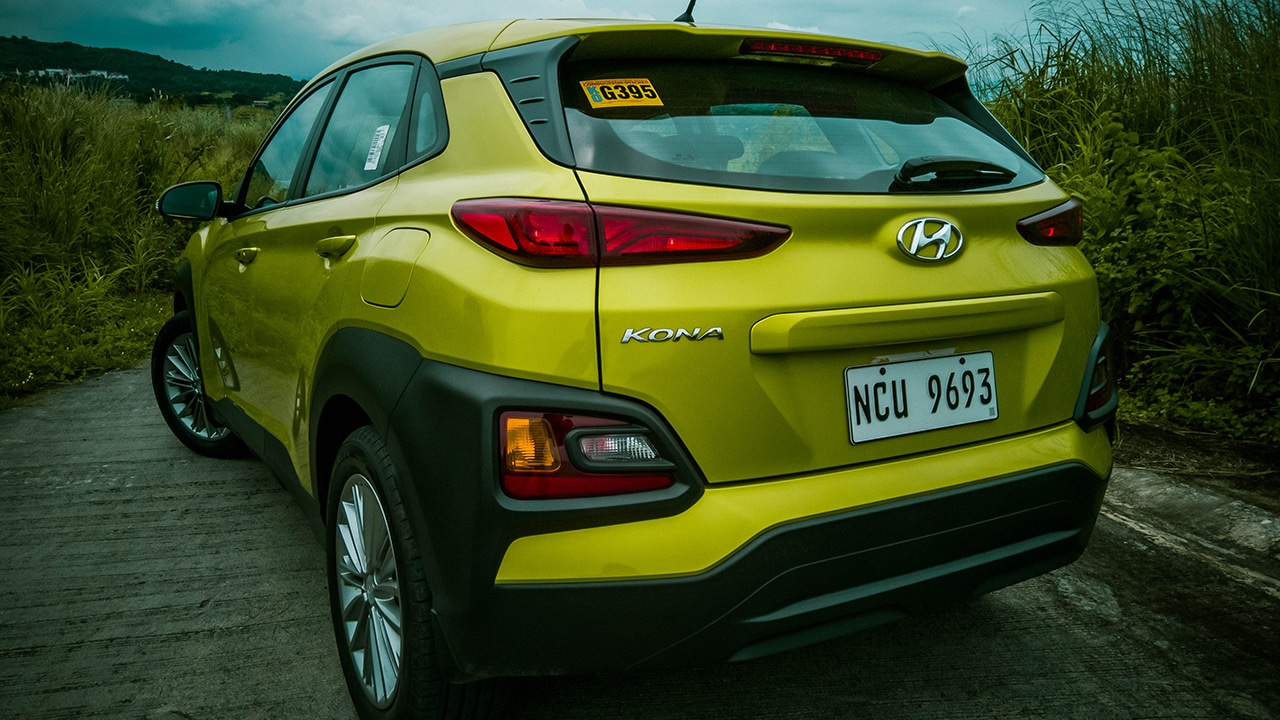 Walking around to the back, you will find a design that is very consistent with the front. It’s almost identical and probably has one of the best looking rear-ends in its segment. 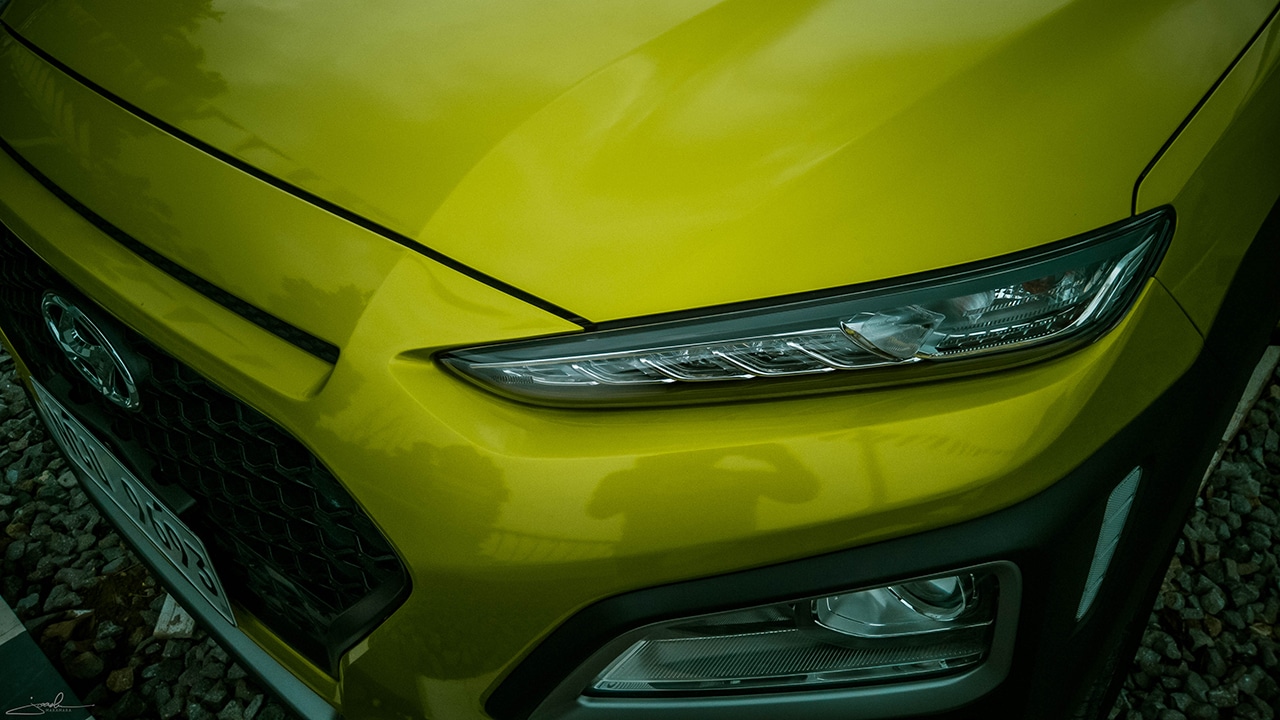 If we were to personify this Kona, it would undoubtedly be an extrovert. He’d be that kind of guy who’s not afraid of being a little flashy and would confidently come up to you to get your attention. 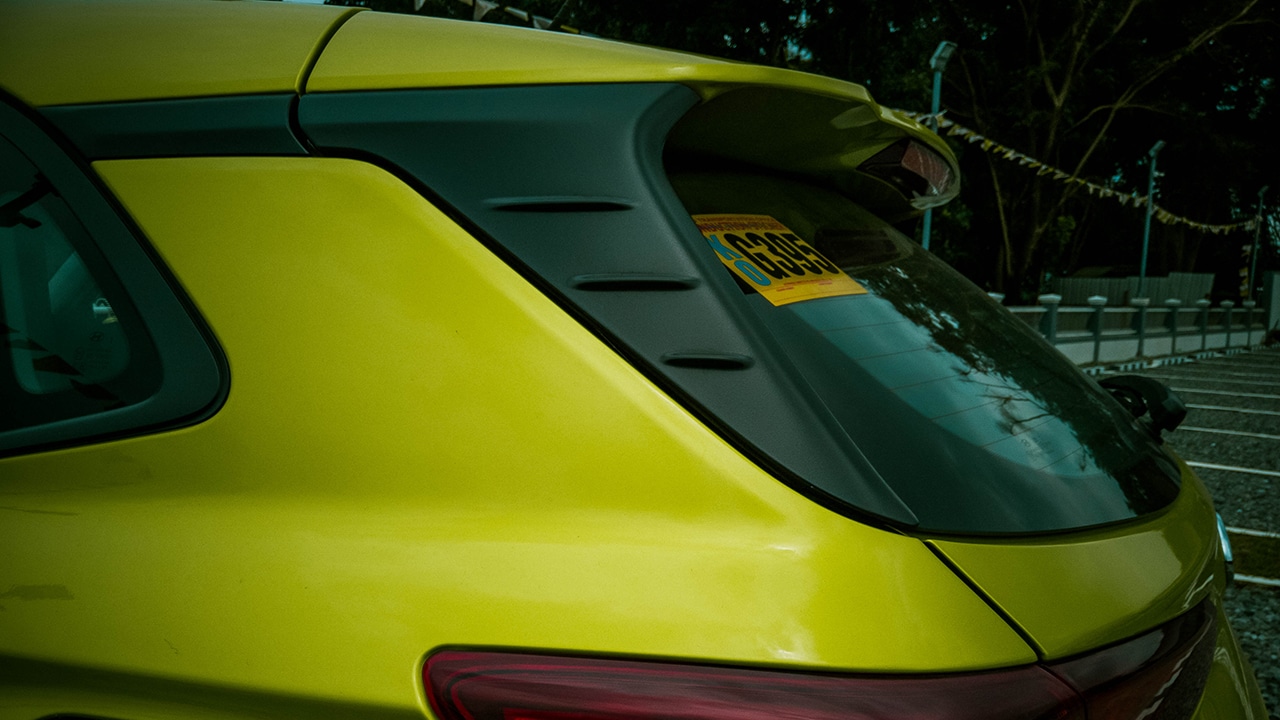 What I’m not a big fan of is the unnecessary amount of plastic cladding. Anyone who has ever owned a vehicle with this type of material will agree when I say it demands high maintenance since it tends to fade quickly.

Overall, the exterior feels exciting and fun, but stepping inside is a different story. 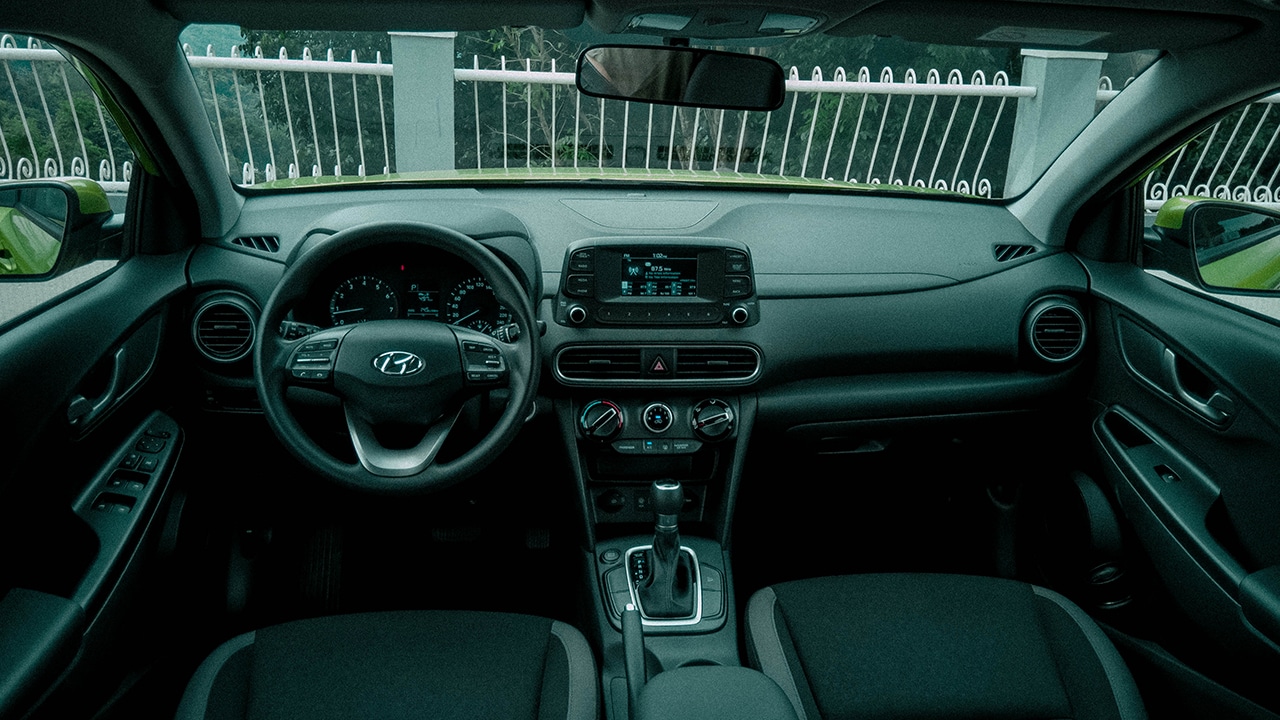 The interior is, well, basic. Scratchy-hard and soft plastic, fabrics, and polyurethane are the main materials used for the interior. It doesn’t give you the same exhilaration as the exterior and sadly feels like it stepped out of character. 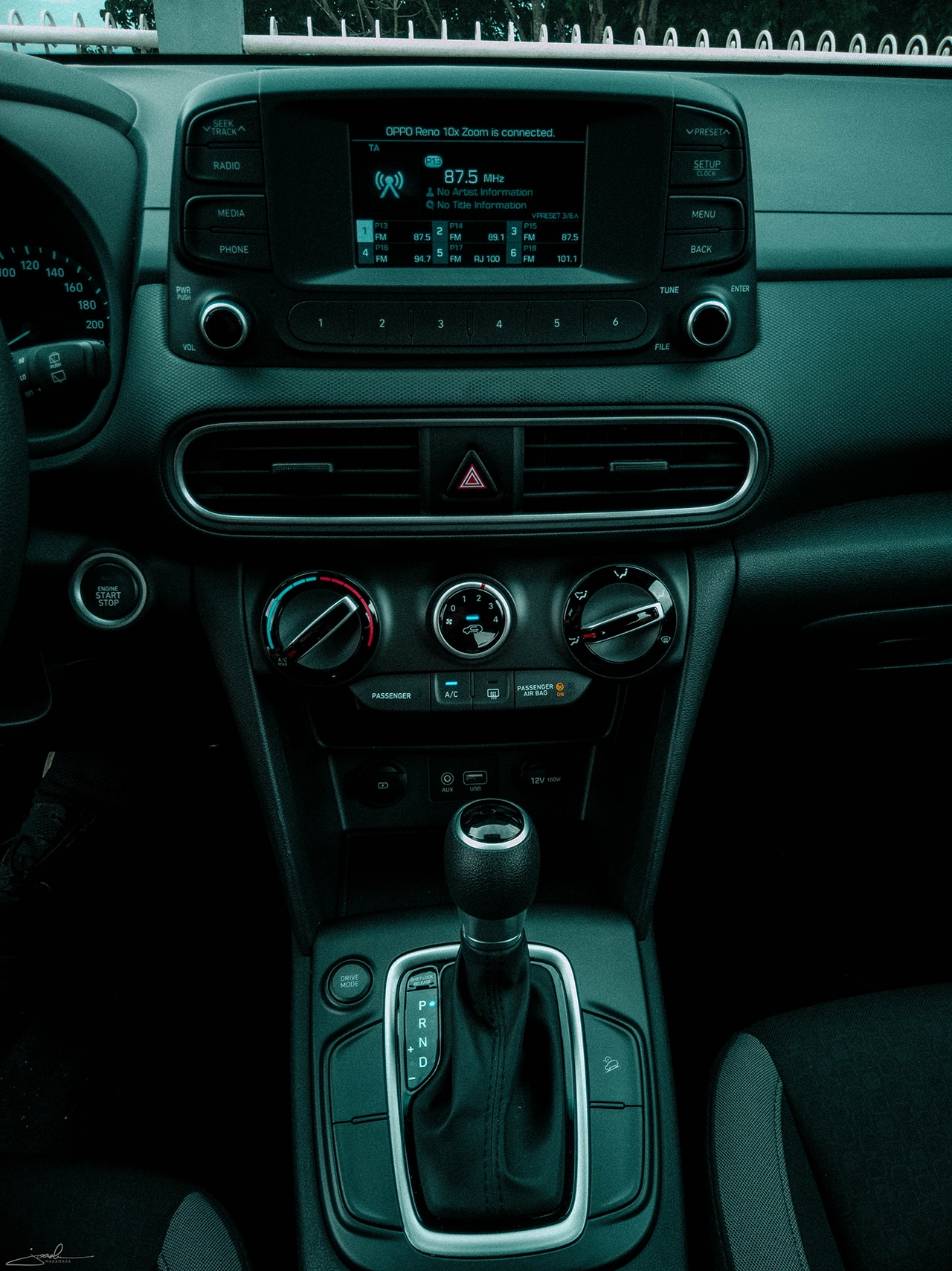 Mounted on the dashboard, you will find a somewhat unappealing infotainment system — A non-touchscreen mono LCD unit that’s initially confusing to use while underneath is its manual climate control. Oh, and its instrument panel didn’t help spice the interior up, either, as it seemed a little too straightforward for this car’s asking price. 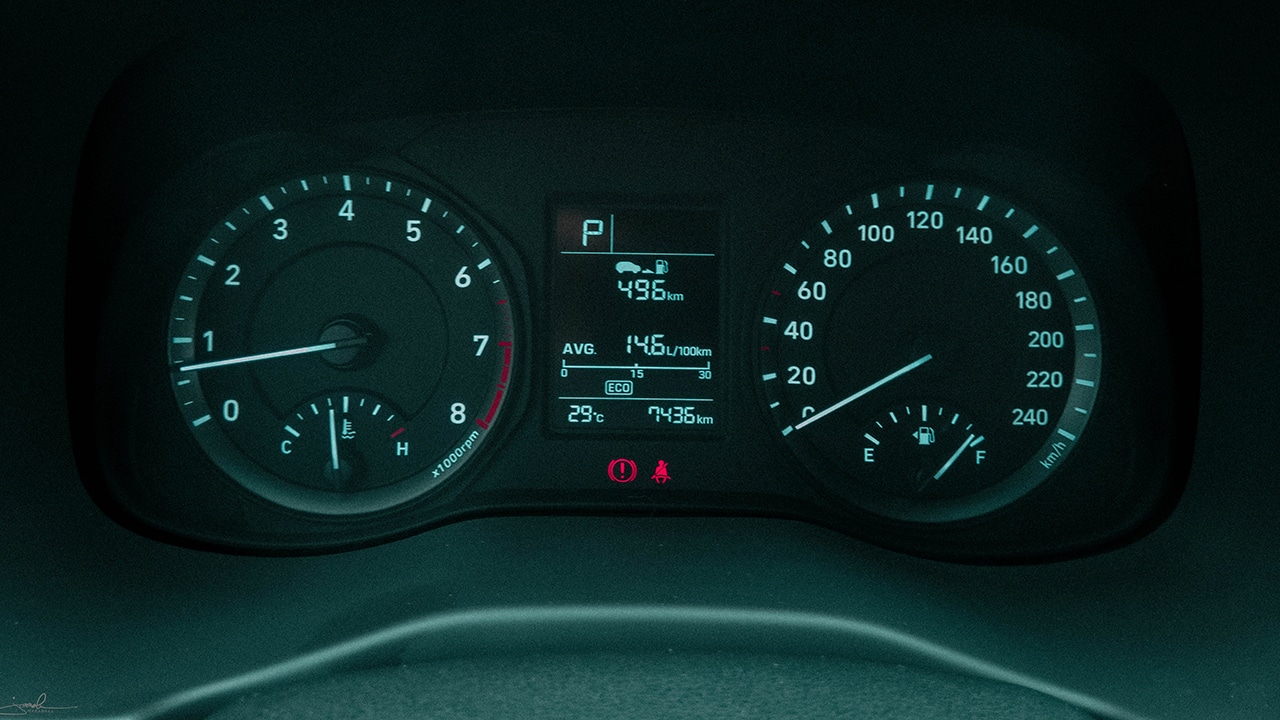 On the up-side, cabin space and comfort are not lacking whatsoever. With head and legroom to spare and plenty of cargo space for everyone. Cup holders, USB ports, and 12V sockets also come as standard. 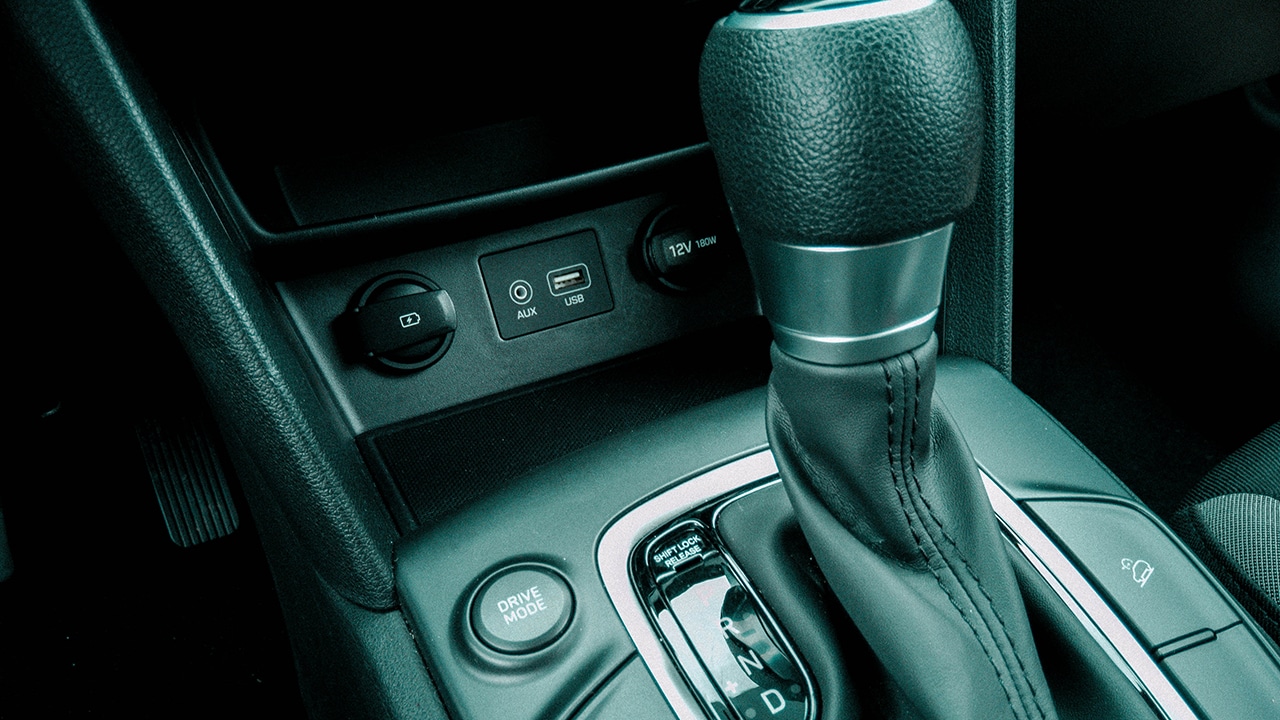 When it comes to safety, Hyundai didn’t skimp on this crossover as it earned a high safety rating in the United States. With a score of 9.8, it has been given the Top Safety Pick+ award. It has Anti-Lock Braking System, traction control, dual airbags, and side curtain airbags as standard. 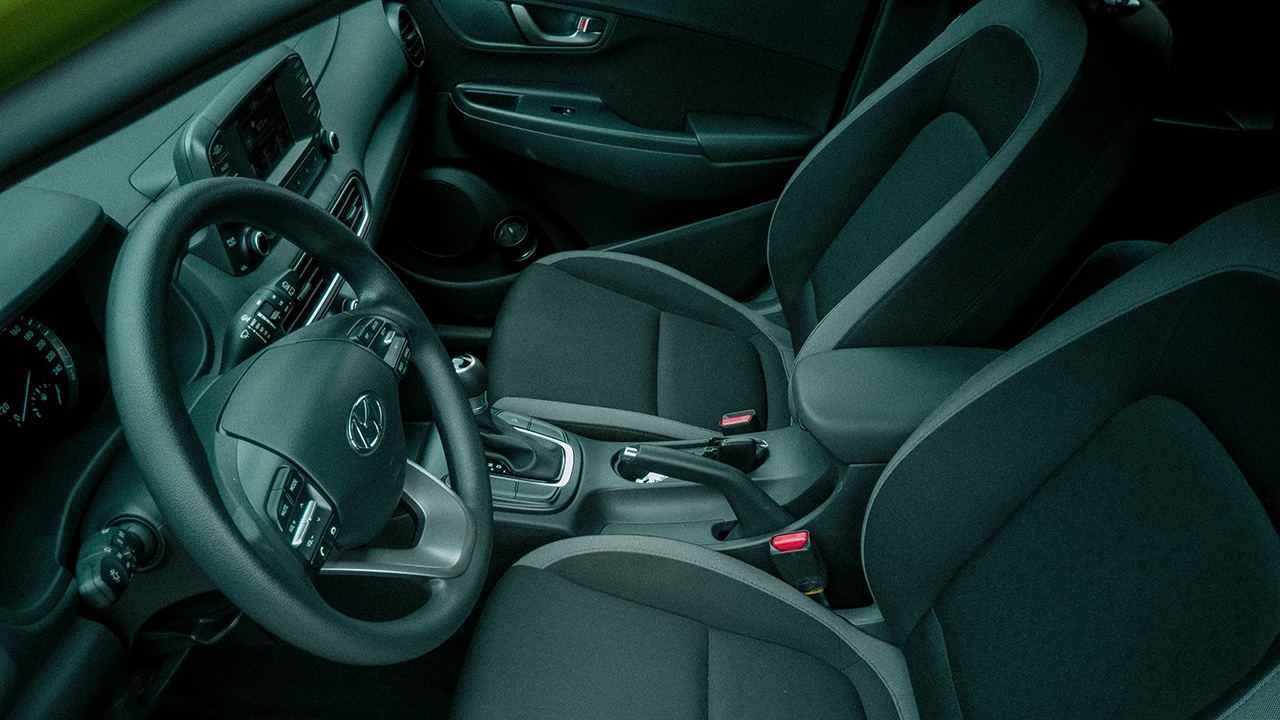 The ride is decently high with a ground clearance of 170mm, nearly as much as its bigger brother, the Tucson. Firing up the engine via keyless push-start button, you hear a smooth running 2.0 DOHC engine. 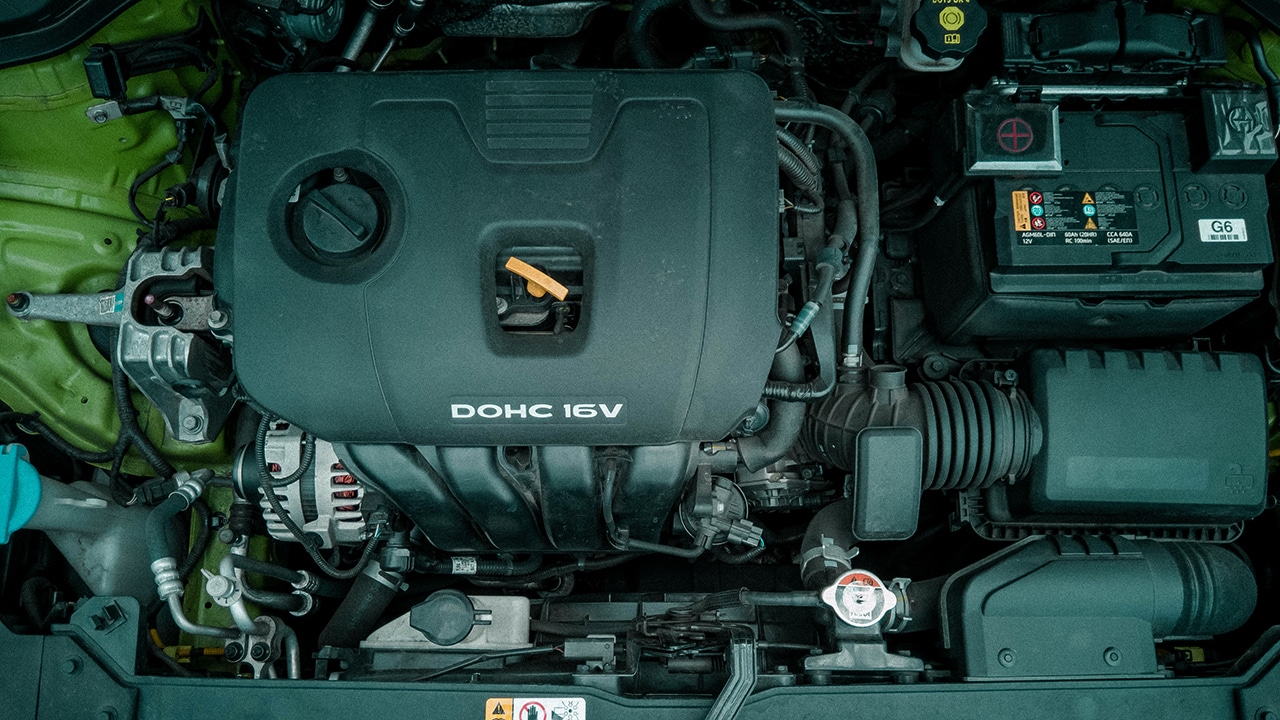 This is then mated to a 6-speed automatic transmission that produces 147hp and 179nm of torque. It’s not the most powerful but is definitely one of the most economical, giving you up to 20km per liter (at best) on highways.

The Kona has three different driving modes you can shift through with a push of a button. You have Normal, Eco and Sport modes which just basically times gear changes differently to give you better responsiveness. 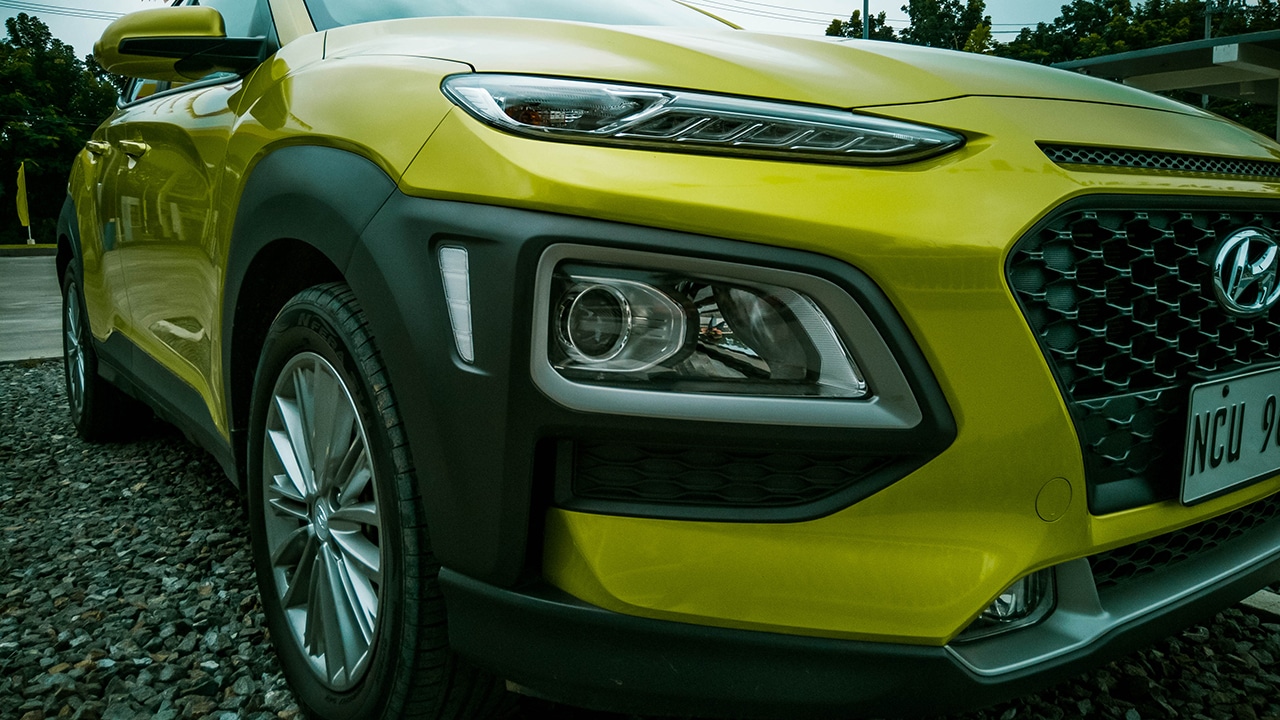 Driving this vehicle is very simple with no unneeded drama. The ride felt smooth and quiet while steering felt properly firm. You do get a bit of body roll around the corners, though.

Lacking from this vehicle is a reverse camera and proximity sensors and, from its price point, you would expect these features as standard. A feature I didn’t find necessary was the hill descent control which would be useful on its AWD variant but not on the FWD version that we have.

For now, the 2.0 GLS is the only variant available here in the Philippines. A straightforward, rather basic but economical ride that would make a perfect daily driver. Although if I were to choose between the two Kona models, I would probably go for the higher AWD 1.6 turbo Ultimate trim model which is a better option than the GLS trim. 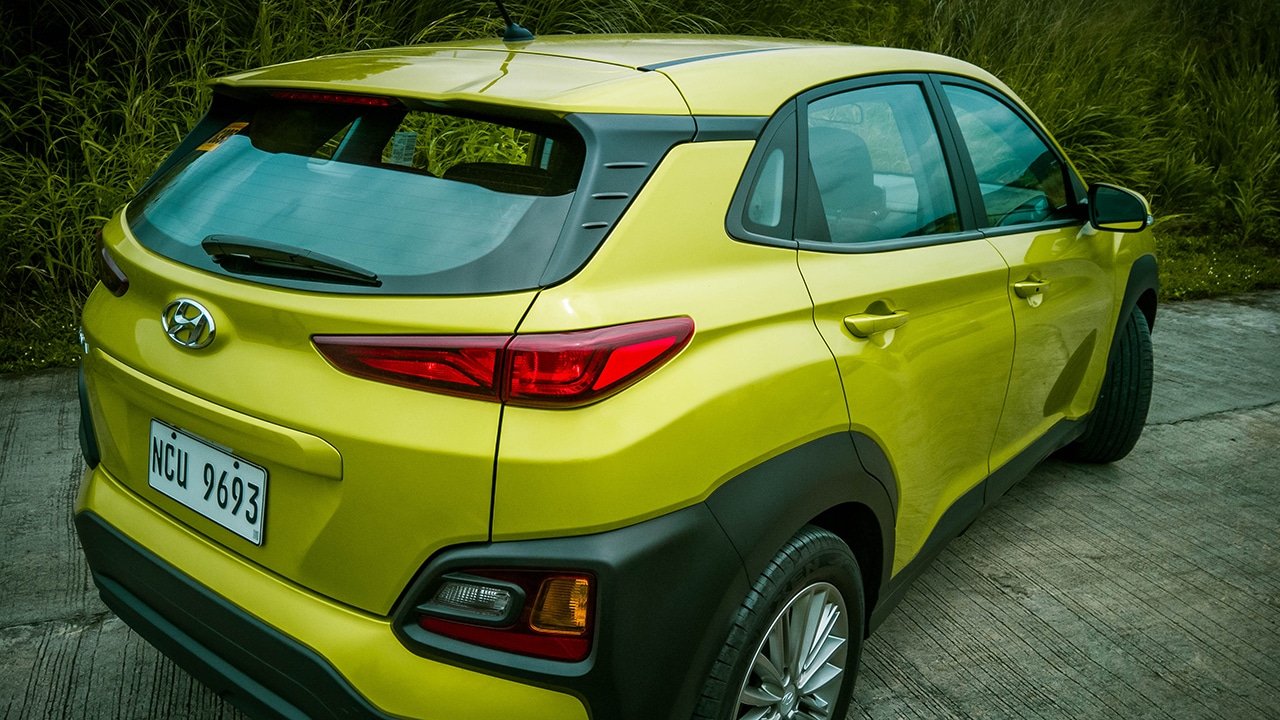 To sum it up, it’s a bit of a bummer that it lacks a reverse camera, proximity sensors, and still runs a sub-par infotainment system in this age of touchscreens and Android Auto.  What I do like, though, is how it looks. This car unquestionably wins in the looks department. And factoring in its safety achievements and fuel economy, we can easily overlook its shortcomings.

Plus more amazing deals just for the month! 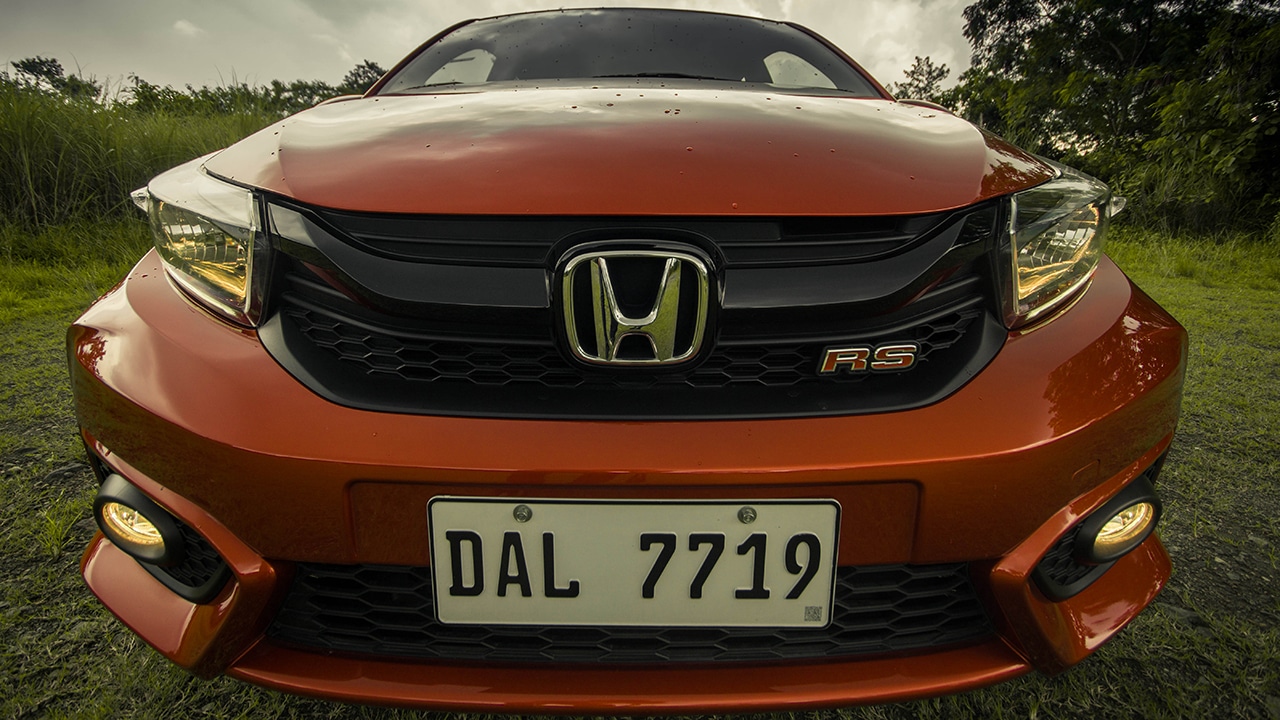 Honda Philippines has lots of promos for car buyers this February. A PhP 250,000 discount is up for grabs with brand-new, old stock Mobilio and other Honda cars. Plus, special downpayment offers can be had only from February 1 to 28. On top of it all, buyers can win exciting prizes through an e-raffle just for this month.

Discounts for Mobilio and others

The first in Honda Philippines February promos is a staggering PhP 250,000 discount for the Mobilio. The discounted variant is 2019 1.5 RS Navi CVT which comes with a price tag of PhP 1,085,000.

Other Honda cars also get discounts like the following:

Buyers may avail of special and regular all-in downpayment offers. For as low as PhP 28,000, they may avail of their first Honda car. Included models are the 2020 Brio, 2021 CR-V, and many more.

Honda is also giving away a free one-year periodic maintenance service (PMS) for the purchase of any year and variant of BR-V until February 28. Upon the release of the vehicle, buyers will receive their 10K PMS/6th-month and 20K PMS/12th-month vouchers. Buyers must present both vouchers on their respective scheduled PMS dates, within the twelve-month period from the release date of their vehicles.

Sodexo+ gift certificates are also up for grabs until March 31 for those purchasing any variant of the all-new City or BR-V. To avail of the gift certificates, buyers must simply present their official vehicle receipt, certificate of registration, and deed of sale (for second-hand units) to their preferred dealership. The PhP 5,000 gift certificate will apply to any existing promo or discount.

For any car model purchased this month, Honda is bundling a free Petron Value Card too. Cardholders can earn 100 additional bonus points for every 140 liters (gasoline) or 200 liters (diesel) accumulated purchase per month. Additional perks include free towing and roadside assistance as well as year-round personal accident insurance.

A raffle that keeps on giving

This isn’t all that Honda Philippines has to offer. By successfully registering and providing contact information on this microsite, buyers will get one corresponding e-raffle entry for a chance to win exciting prizes. Forty winners can win one of the following items: 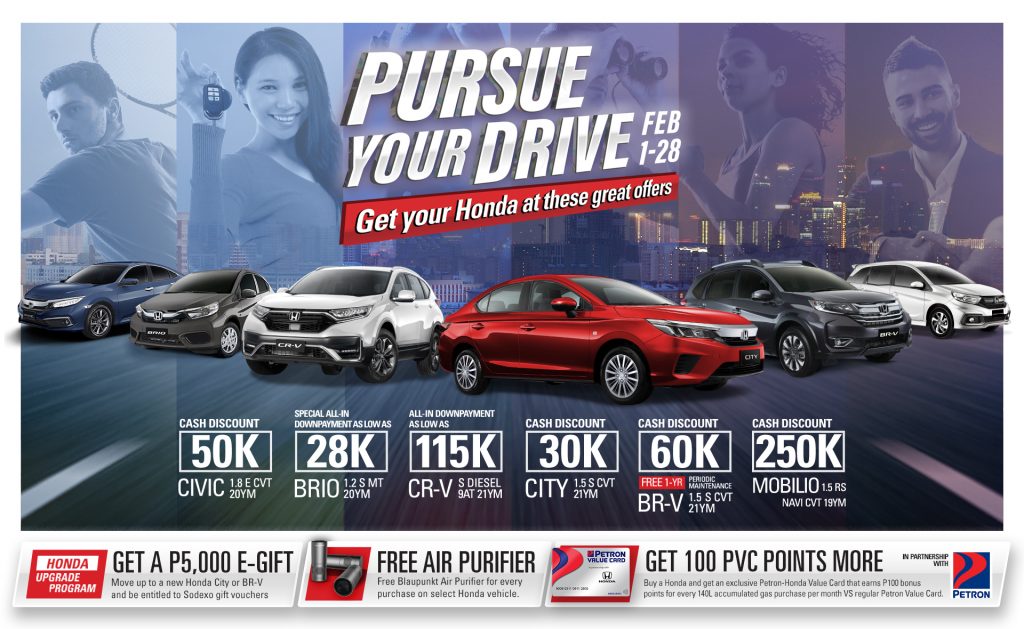 For interested buyers, they can avail of a special all-in financing program at 10% downpayment, with 36-60 months payment terms for select models. This financing program is available through BPI Family Savings Bank, RCBC, China Bank Savings, and Bank of Commerce.

Customers may also submit their bank loan applications online through the Auto Loan link page on the website for select bank partners, subject to approval.

All these offers include a three-year LTO registration and chattel mortgage and a free one-year comprehensive insurance with acts of nature through select bank partners.

To know more about the promos and the latest updates, visit the nearest dealership or access Honda Philippines through its official website.

Ford’s Super Truck lineup is something to watch out for 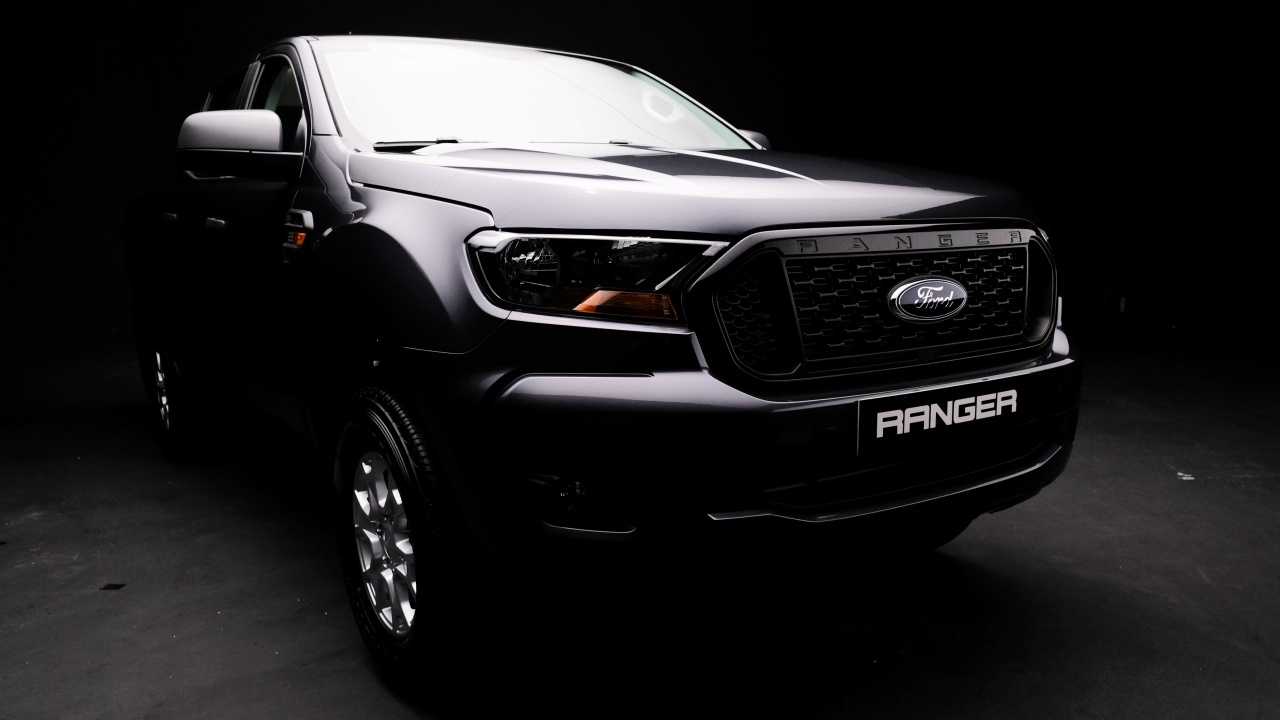 Ford is just getting started. If you think that the American Brand is willing to sit on its laurels after dominating the 4×4 Pickup sales for 2020, Ford Philippines is set to kick-off 2021 with a refreshed lineup for the Ford Ranger.

The biggest change to the New Ford Ranger comes with a more aggressive and sporty facia that embodies the brand’s legacy of being Ford Tough and ushering the call to Live the Ranger Life. The new Ranger sports a bolder look and new design elements, giving it a stronger impression and tougher stance on the road.

You can also consider the Ford Ranger as your GadgetMatch with Bluetooth connectivity as well as phone integration with Apple Carplay and Android Auto all cast on a glorious 8-inch screen. The New Wildtrak and Ranger Raptor also comes with Sync 3 voice-Activated controls that further enhances your audio experience. 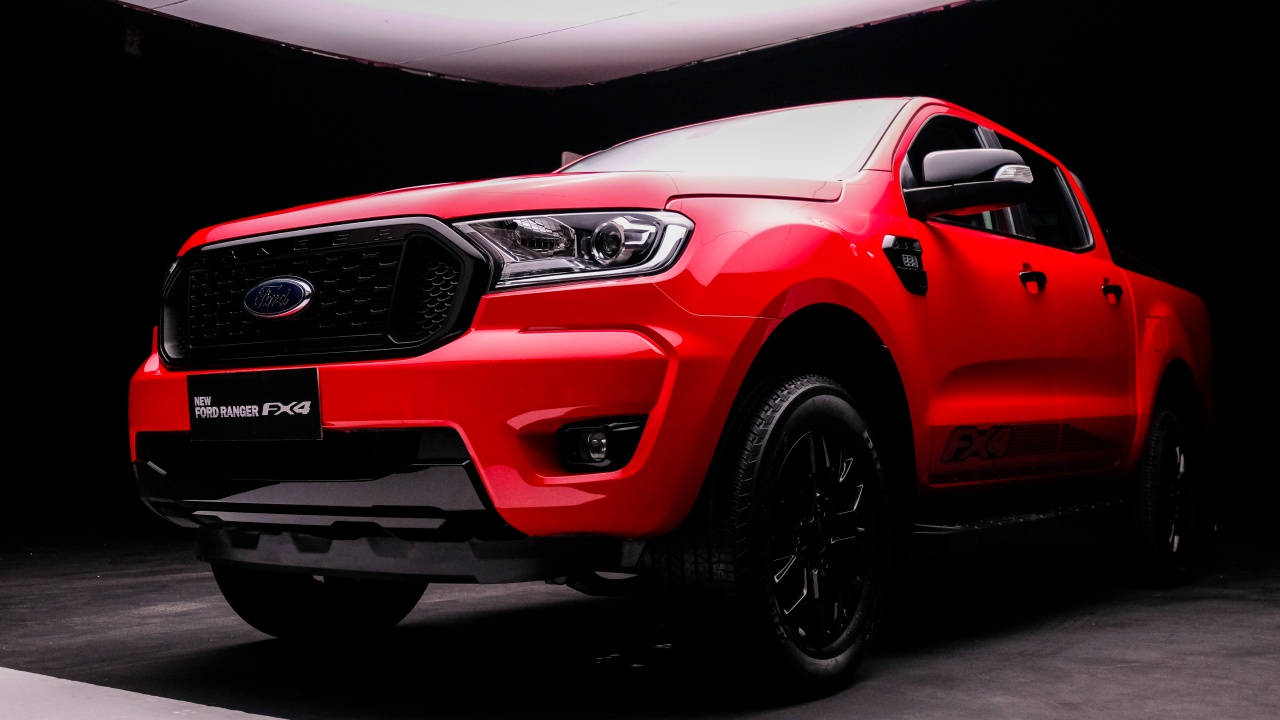 Engine models available for the various variants include the 2.2 liter Duratorq TDCi Diesel engine that makes 160 PS at 3,200 RPM and 385Nm of torque at an insanely low 1,600-2,500 RPM, this comes with a 6-speed manual and 6-speed automatic transmission and available for the Ford Ranger XLS, XLT and FX4 Models.

You also have the 2.0 liter Ecoblue Engine Bi-Turbo Diesel engine for the Wildtrak and Raptor variants to the tune of up to 213 PS at 3,730 RPM and 500Nm of torque. This comes with Ford’s state of the art 10-speed Automatic Transmission.

Despite the lack of a fleet model, of which Ford Philippines is still mulling over the marketability, The Ford Ranger still has the most diverse roster of variants from the value packed Ranger XLS to the legit Baja-bred Raptor. Prices remain the same at the moment except for the XLT and FX4 models.

Elon Musk’s Tesla is investing $1.5B in Bitcoin

It would start accepting Bitcoin as a payment method 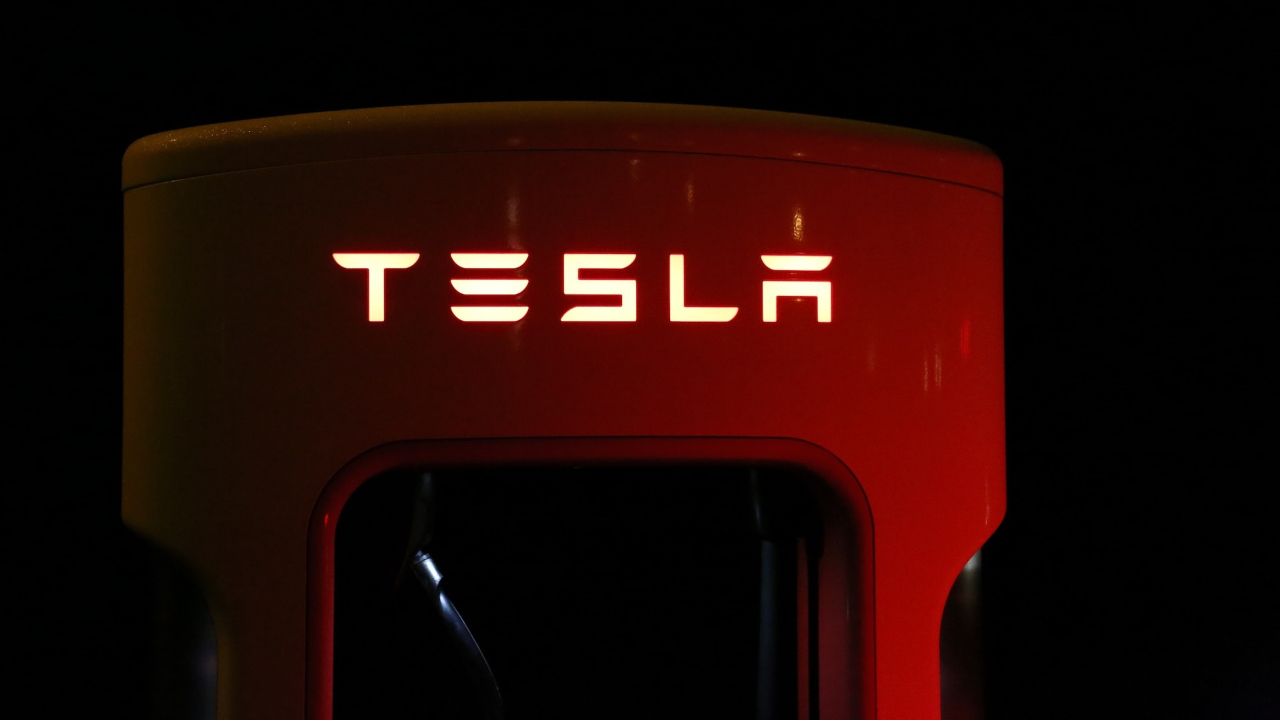 In a filing with the Securities and Exchange Commission (SEC), Tesla said it bought Bitcoins for more flexibility to diversify further and maximize returns on cash. To be precise, the company has invested a whopping US$ 1.5 billion in the cryptocurrency and intends to accept it as legal tender soon.

Obviously, just like his tweets, the announcement skyrocketed Bitcoin’s value by as much as 15 percent. The price of one Bitcoin even exceeded US$ 44,000 for a few minutes. Tesla is among the first to recognize cryptocurrency’s potential and intends to ride the wave with an early heads-up.

Bitcoin has been in the news for the longest of time, and its perception is quite polarised. The Bitcoin investors are confident that future currencies would be deregulated and support the free market’s principles. However, its volatility is too high, making it not a very suitable candidate for regular transactions. Adding to this, the currency is increasingly exploited by criminals to launder money and fund illegal activities.

Although Tesla is said to be in a unique position as far as accepting Bitcoin payments is concerned. The company does not have dealerships and directly sells its vehicles. A car is a huge purchase, and one can try paying via Bitcoin since the amount won’t be too minuscule. We don’t have a timeline on when you’ll be able to buy a Tesla in exchange for Bitcoins, but it’ll happen soon.

In a December 20 tweet, Elon Musk said that “Bitcoin is almost as bs as fiat money,” suggesting his belief that it is perhaps less “bs” than traditional government-backed currencies.

The most wonderful and mind-boggling thing about Bitcoin is, it could be worth US$ 500,000 after a year or even US$ 0. It’s a risky investment, but Musk has always preferred walking on a thread.

Galaxy A82 will experiment with a sliding camera