iPhone 8 Plus and iPhone X | GadgetMatch

Apple didn’t manage to sell the most number of smartphones, but they still earned a lot more than their competitors. According to the latest data from Counterpoint Research, Apple had the biggest share of industry profits during the second quarter of the year.

The report states that Apple earned 62 percent of the second-quarter profits related to smartphone sales. Samsung, which is the top-selling smartphone vendor, is responsible for just 17 percent of smartphone profits in the quarter. Basically, Apple’s profits amounted to more than 3.6 times than Samsung’s.

Samsung’s profits continue to decline over the last three years, but Chinese tech giants enjoy the opposite. Huawei placed third accounting for eight percent of the smartphone profits, OPPO has five percent, Vivo gets four percent, and Xiaomi with three percent. The report noted that the Chinese manufacturers produced more premium handsets during the second quarter which allowed them to score US$ 2 billion in profits for the first time. 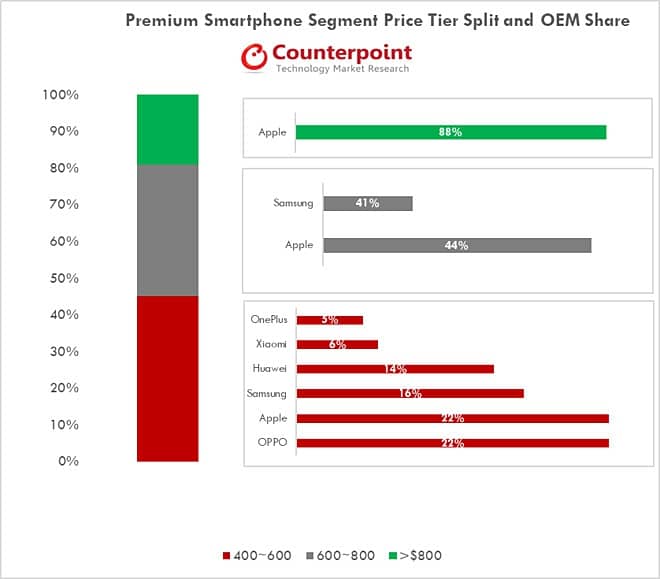 Counterpoint also showed Apple’s dominance in the high-end market. During the second quarter, the iPhone was responsible for 88 percent of the revenue generated by sales of smartphones above US$ 800. Apple, with 41 percent, and Samsung, with 44 percent, battled for phones priced between US$ 600 to 800.

The midrange US$ 400 to 600 price of smartphones was led by Apple and OPPO, each with 22 percent of the revenue generated by sales in that segment. Samsung and Huawei were next with 16 and 14 percent, respectively. Xiaomi follows behind with six percent and OnePlus with five percent.