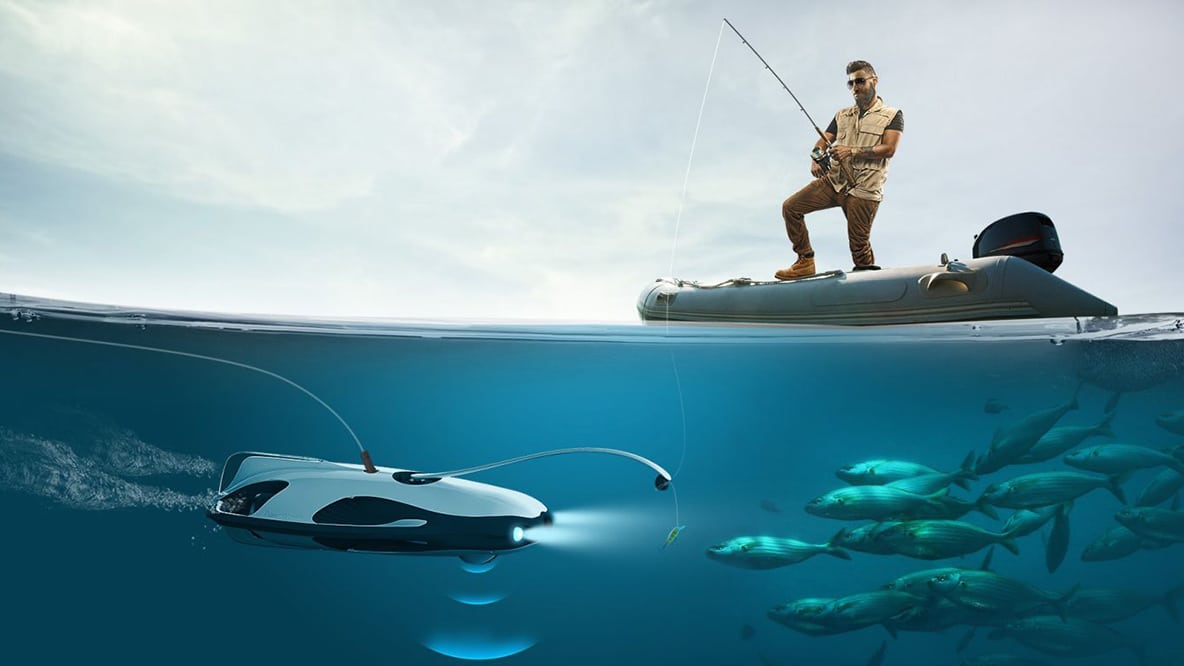 Drones have become a regular sight in the sky and soon they’re going to be taking over the waterways.

I think of them as unmanned submarines and my imagination runs wild with images of 20,000 Leagues Under the Sea. But, the idea of owning my own submarine, in my mind, would make me a real-life Bond villain. And, when you see the price tags that go along with them you might have to be a supervillain to afford them!

At StartUp Launch Pad at the Global Sourcing Fair in Hong Kong, I came across a number of underwater drones. They got me thinking of just how much is happening under the sea.

This is the world’s first bionic robot fish. This Kickstarter campaign is currently in production and has not yet shipped to any backers.

The single fin for propulsion on the back might seem too basic, but BIKI is equipped with sonar for obstacle avoidance. It comes with a 4K wide-angle camera, can descend to 196 feet and should last you one to 1.5 hours depending on what the water conditions are like.

If you’re looking to take BIKI into the sea, it’s already been to Antarctica to help explore unknown territory. There is even a light if things get a little dark down there.

BIKI is controlled by an iOS or Android app and it one of the few underwater drones that doesn’t come with a tether. With the return to base feature, you should never lose it.

Currently available for US$ 599 on pre-order and US$ 999 when it officially goes on sale, even at it’s higher price tag it’s one of the most affordable underwater drones on the list.

The Gladius is what I expect an underwater drone to look like. It’s bright yellow and reminds me of the ones I used to play with in tub as a kid. The 16MP camera takes 4K photos and streams 1080p video. It can reach 100 meters in depth and has a three-hour battery life. Gladius has quad thrusters which have it moving at four knots or two meters/6.6 feet per second. It has a controller, or can be controlled by an Android or iOS app. It’s tethered to a floating buoy that has an integrated wireless module to make for easier smartphone connectivity.

The Blueye Pioneer drone comes from the same Norwegian technology that makes professional underwater drones aimed at serious divers and fishermen. The drones can get to a depth of 150 meters with a minimum battery life of two hours and is capable of inspecting underwater sea cables or checking offshore wind farms. Its Android or iOS app controls the tethered drone which can stream 1080p video and take HD photos.

Blueye also has VR goggles, which you can use to control it and share what you see to your favorite social network.

You’ll have to really want the deep sea capabilities of the Blueye Pioneer, as you can pre-order it with a US$ 100 deposit now for US$ 3,550 plus tax and shipping. Estimated delivery is in 2018.

Deep Trekker has been creating underwater drones that have been used for search and rescue for years. This is a professional drone, so the build is quite rugged.

The maximum run time is eight hours so this is a real working drone. It comes in five different varieties starting at US$ 4,873 and heading up to US$ 12,000. They’re a Canadian company, so we’ve obviously got a soft spot.

The OpenROV Trident is an underwater explorer. The drone can dive down to 100 meters, travel at four knots, capture photos and 1080p videos at 30fps, and it boasts three of hours run time. There is an Android app to control it and it has up to 100 meters of Kevlar reinforced tether.
You can pre-order for US$ 1,499 plus tax and shipping.

The PowerRay is a drone for fisherman. The Power Ray Explorer, Angler, and Wizard come with a FishFinder, a detachable sonar pod that provides information on fish distribution, water temperature, depth, and landscape. The drone also has a fish-luring light that uses a flickering LED to lure fish in (pun intended).

This is a hands-free drone that’s designed to follow you around while you’re underwater and capture amazing photos and video of you living your mermaid dreams. The iBubble is a fully autonomous diving drone — it tries to be your floating GoPro with a built-in cameraman.

You wear a tracking bracelet to control the video modes so the iBubble can track you. It can move up to 25 meters away from the divers and descend up to 60 meters

It’s available for pre-order for US$ 1,999 with estimated delivery around July 2018.

If you’ve read this far down the article it means that you really, really want an underwater drone. Here’s a fun water-friendly gadget that will hold you over until the prices come down on the real deal:

If you’re just looking for something to play around with in the pool and aren’t looking to break the bank, the Silverlit Spy Can Aqua Submarine is only US$ 50. But, the price tag means you’re making a lot of concessions. The channel remote is UV-operated, so it could have trouble outdoors or on very sunny days.

This article originally appeared on Mobile Geeks. Nicole Scott, who was GadgetMatch’s companion and guide to its very first StartUp Launch Pad experience, shared her experience on the bi-annual conference at the Global Sourcing Fair in Hong Kong.