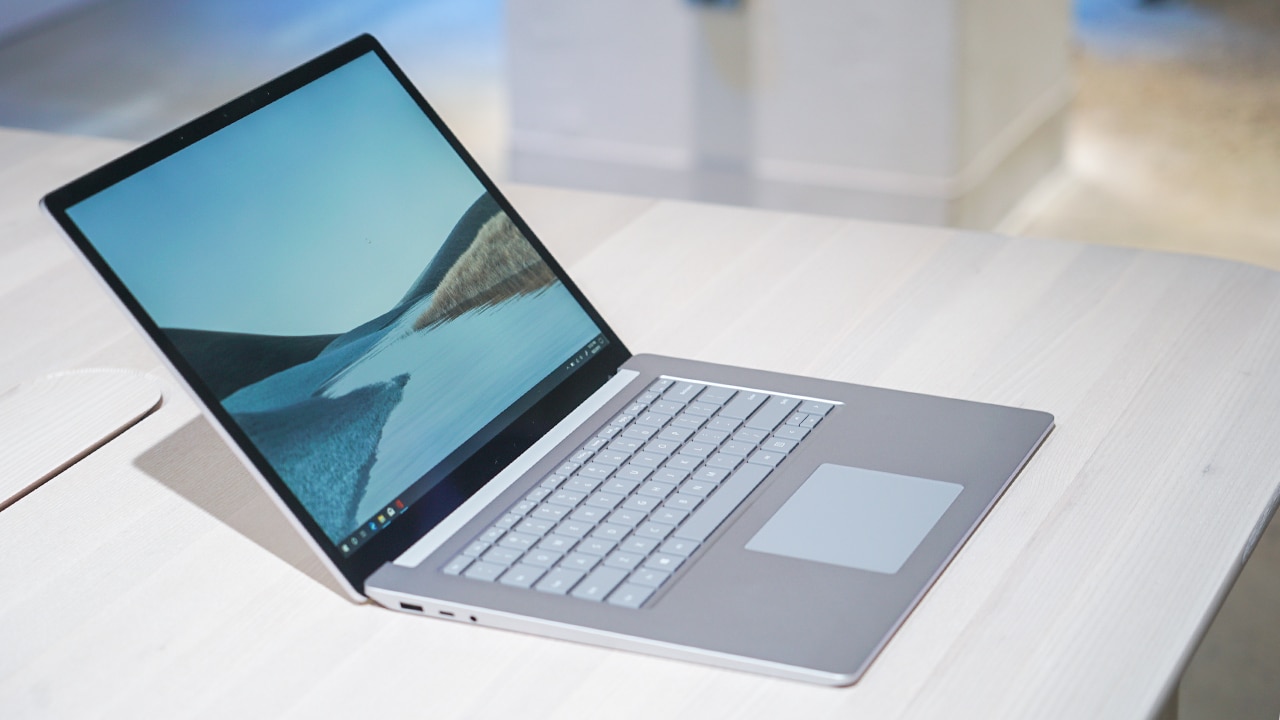 When we talk about laptop lineups, we often think of devices catering to different lifestyles. Each laptop’s selling points usually draw from differing features, form factors, and price points. Microsoft’s newest Surface lineup shares in this age-old tradition. However, the new offerings have a surprising point of differentiation: each laptop carries a chipset from a different brand. 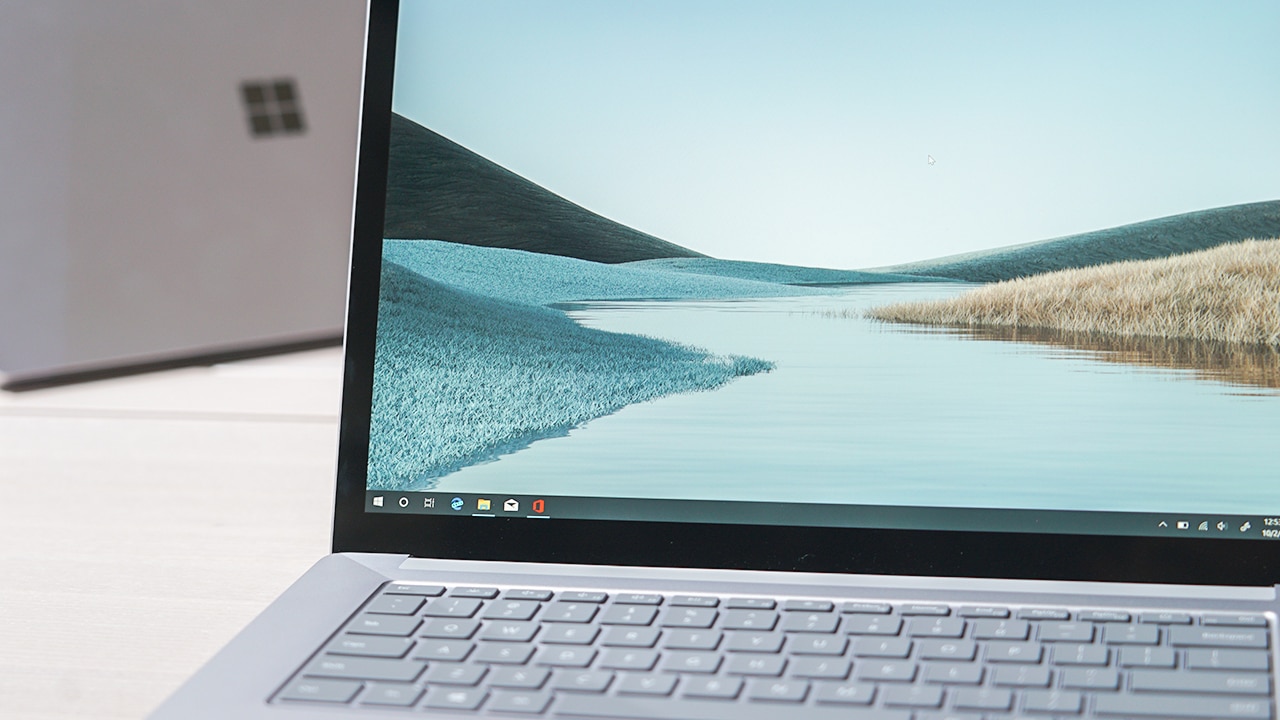 First up, the Microsoft Surface Laptop 3 offers a 15-inch variant with two exclusive AMD Ryzen Microsoft Surface Edition chipsets: a Ryzen 7 3780U chip and a Ryzen 5 3580U chip. According to Microsoft, the laptop’s custom chipset combination is the most powerful hardware available for its form factor. Alternatively, the Surface Laptop 3 also offers a 13.5-inch variant with a quadcore 10th-generation Ice Lake Intel Core chipset.

Microsoft is also offering an all-aluminum design for the Surface Laptop 3. Unlike the formerly standard fabric design, the metal design touts a maximized screen. The screen doesn’t have speakers or rubber protectors on the bezel. Also, unlike its predecessors, the Surface Laptop 3 sports a USB-C port for more compatibility. For power, the laptop boasts 11.5 hours of battery life. 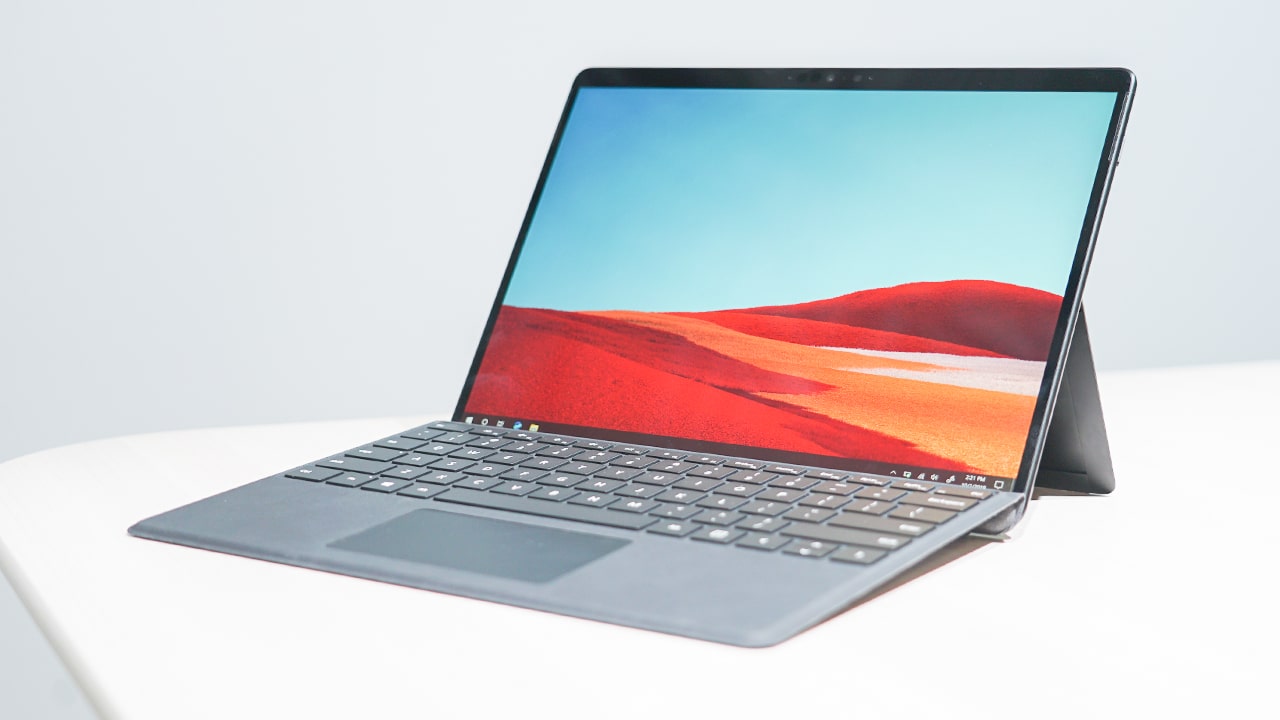 Next on the table, the Microsoft Surface Pro 7 — the company’s 2-in-1 laptop series — is a pure Intel experience. The series offers Intel chipsets going up to the 10th-generation Intel Core i7 (or as low as the dual-core i3 chipset). The device can also offer up to 16GB of RAM and 1TB of internal storage. In comparison, the starting model comes with only 4GB of RAM and 128GB of internal storage. As with its predecessors, the 12.3-inch Surface Pro 7 has a detachable Surface Type Keyboard and a Surface Pen. 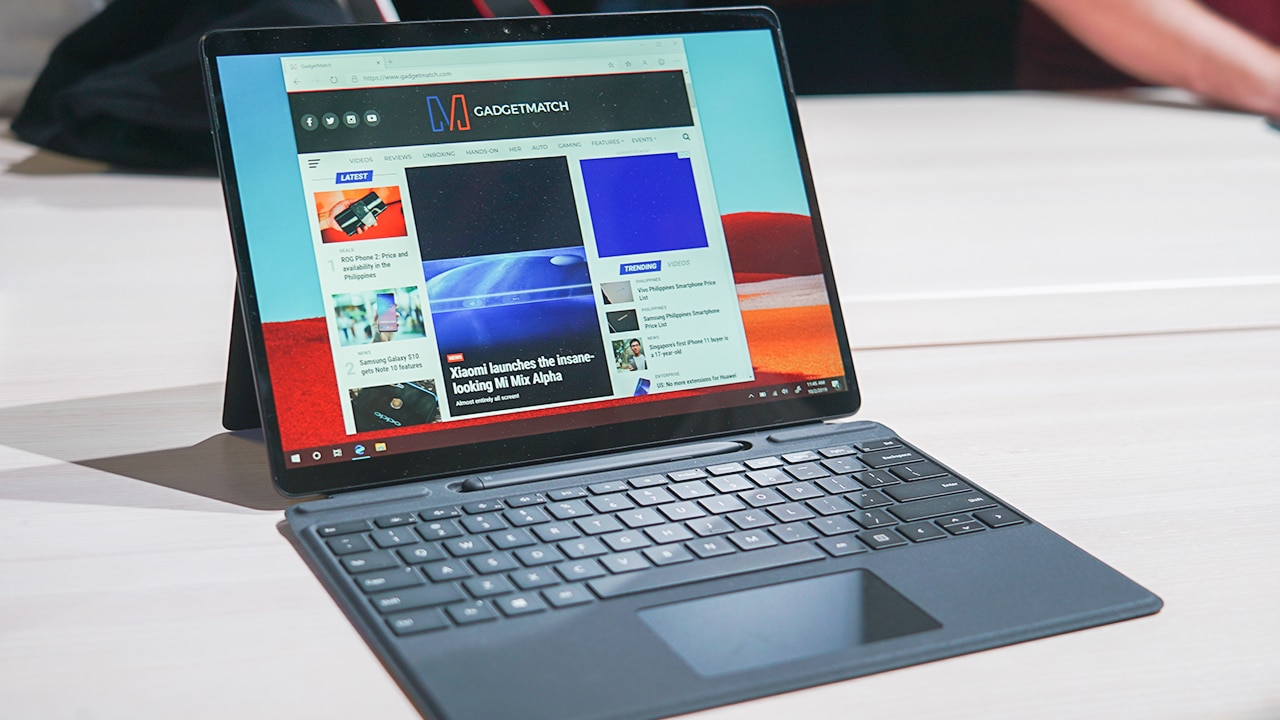 Rounding out Microsoft’s new launches, the Microsoft Surface Pro X comes up with something entirely different. The new laptop goes back to the Surface’s past. It is the company’s first ARM-based Surface since 2013. The 13-inch 2-in-1 device comes with a customized Qualcomm Snapdragon 8cx processor called the Surface SQ1. It is one of the Microsoft’s lithest devices, weighing in at just 1.68lbs and measuring up to only 5.3mm in height. Despite the size, the Surface Pro X packs in USB-C compatibility and fast charging.

Finally, the Surface Pro X will ship on November 5. It will retail for US$ 999. 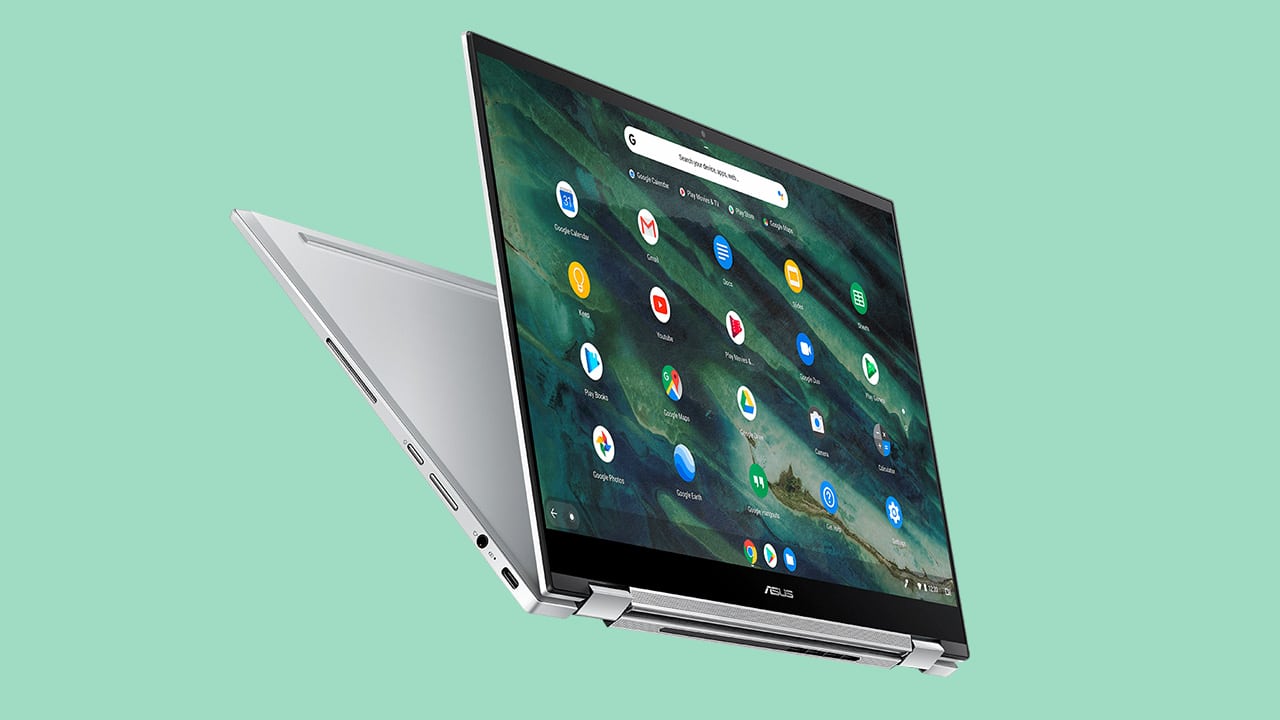 Despite Apple’s dig at Chromebooks, it appears to be going strong with yet another addition to the portfolio — the ASUS Chromebook Flip C436.

ASUS is calling this the thinnest and lightest 14-inch Chromebook. It’s only 13.7mm thick and weighs just 1.1kg.

Complementing the slim form factor are two unique finishes: An iridescent Aerogel White which changes color depending on your viewing angle, and a more subtle Transparent Silver.

The sexy look extends to the display which has an 85 percent screen-to-body ratio.

One would think something this slim form-factor will hold it back from going all out in performance. Fortunately for us, that’s not the case. 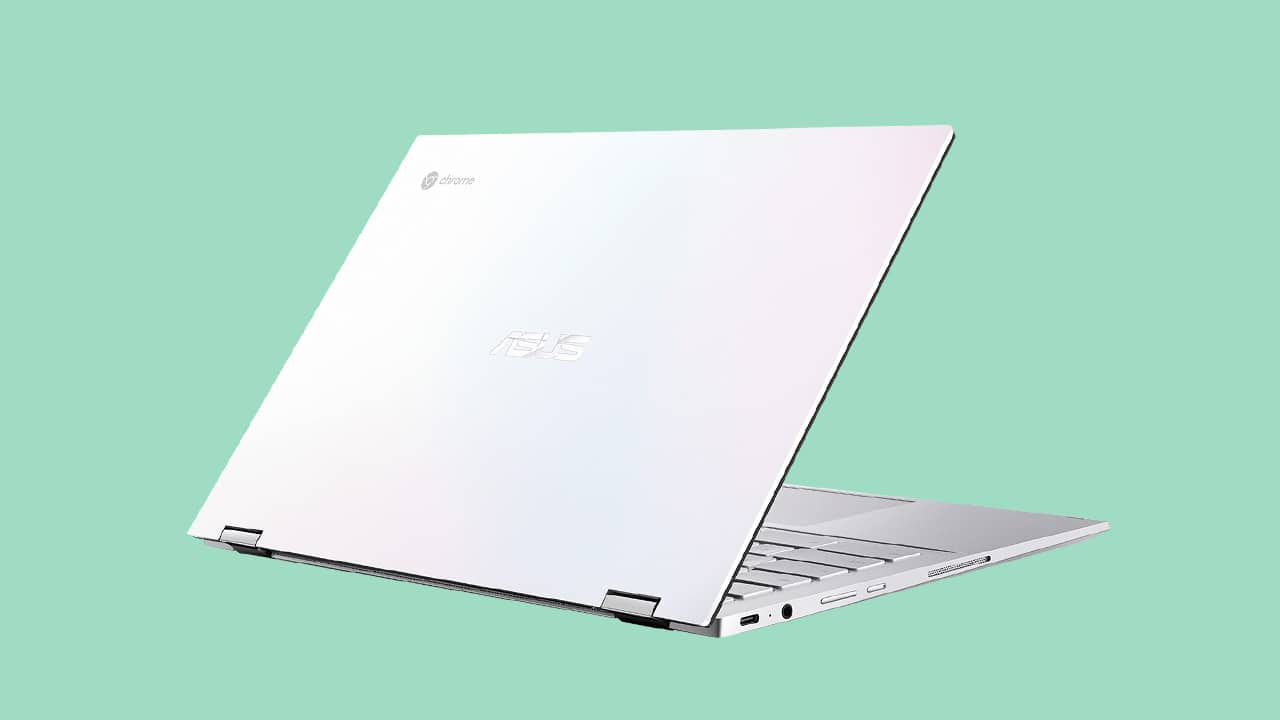 Whether you’re typing in laptop mode or writing on it in tablet mode, this will help you get your work done. Yes, write on tablet mode. This Chromebook supports any USI-compatible stylus.

The ASUS Chromebook Flip’s 42W all-day battery promises to delivery up to 12 hours of battery life.

Not just for work

When you’re done with the day’s work, you can flip it to tent mode for a Netflix session. The display along with the Harman Kardon-certified speaker setup should produce audio perfect as you unwind for the day.

The ASUS Chromebook Flip C436 starts US$ 999 will be available at around the first and/or second quarter of 2020.

The Lenovo Ducati 5 is a racing inspired laptop

It even gets an exhaust note on startup! 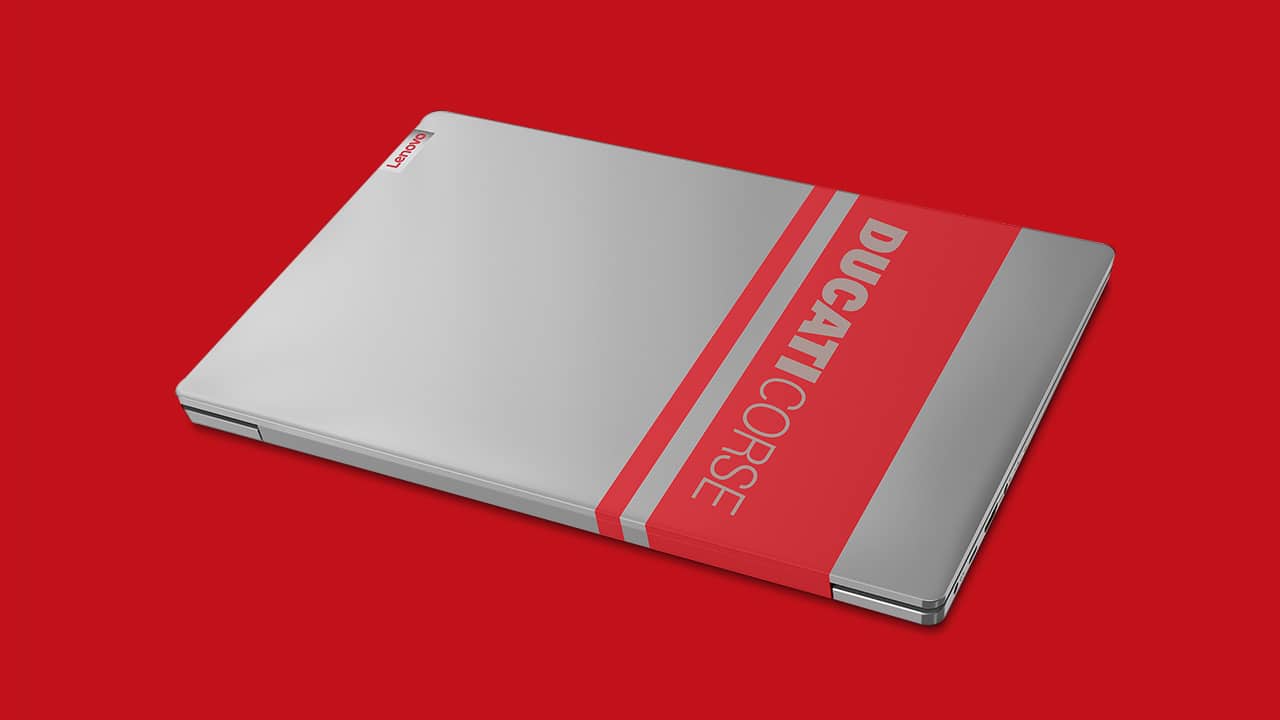 Lenovo has been partnering with Ducati on the racetrack for a couple of years now, and today, the company announced the Lenovo Ducati 5, a new Windows 10 laptop that was designed in collaboration between the two companies.

The racing stripe and additional design features come together well, and the fresh 10th-gen processor from Intel should keep it running quickly. The BIOS chime is meant to match the sound of Moto GP riders, and it comes in a Ducati gift box that has matching colors. It also comes with a sleeve that has a Ducati shield.

Apart from the Ducati branding, Ducati 5 is a standard mid-range laptop. It comes equipped with a 10th gen Intel Ice Lake Core i5-1035G1, Intel integrated graphics, 8 GB of RAM, a 14-inch display, and up to a 1 TB PCIe SSD. 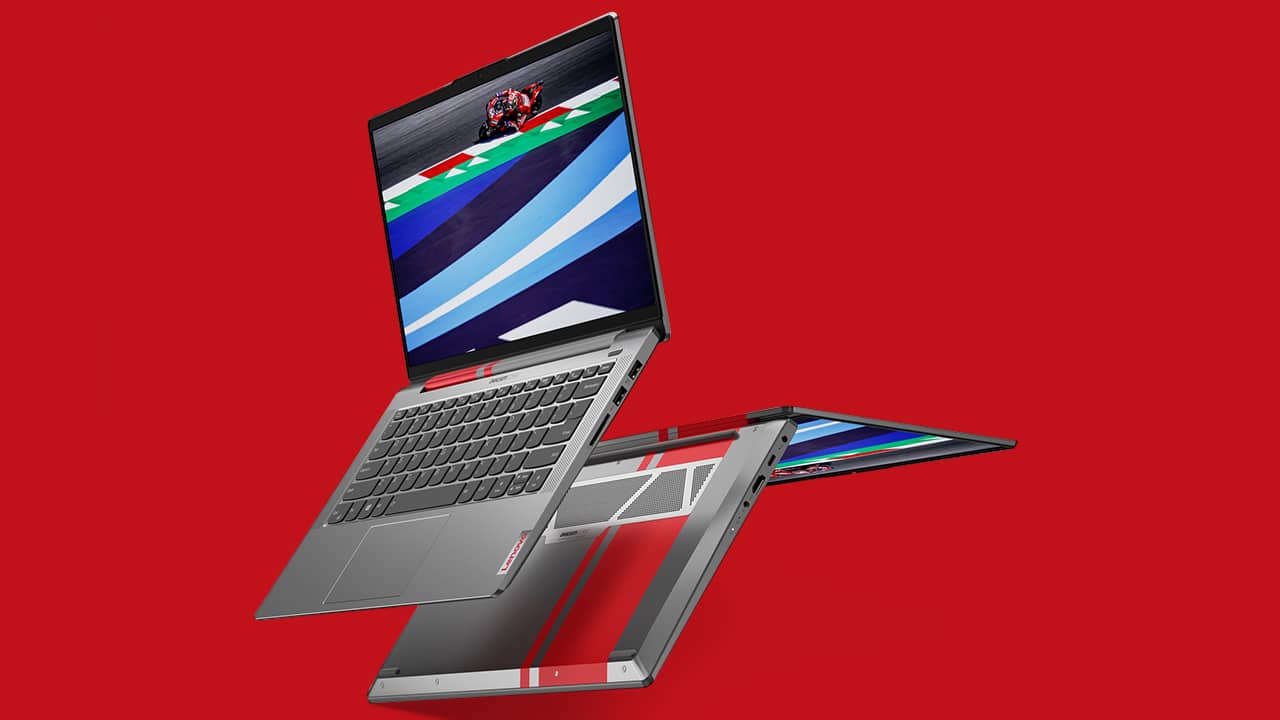 Unsurprisingly given the size, there’s no discrete graphics on board, just the integrated graphics of the chip. This is not meant for serious video work or gaming.

The Lenovo Ducati 5 starts at EUR 900 and will be available in April 2020. Lenovo does not list a U.S. pricing. With a production run of just 12,000 units, the Ducati 5 is clearly a niche product. 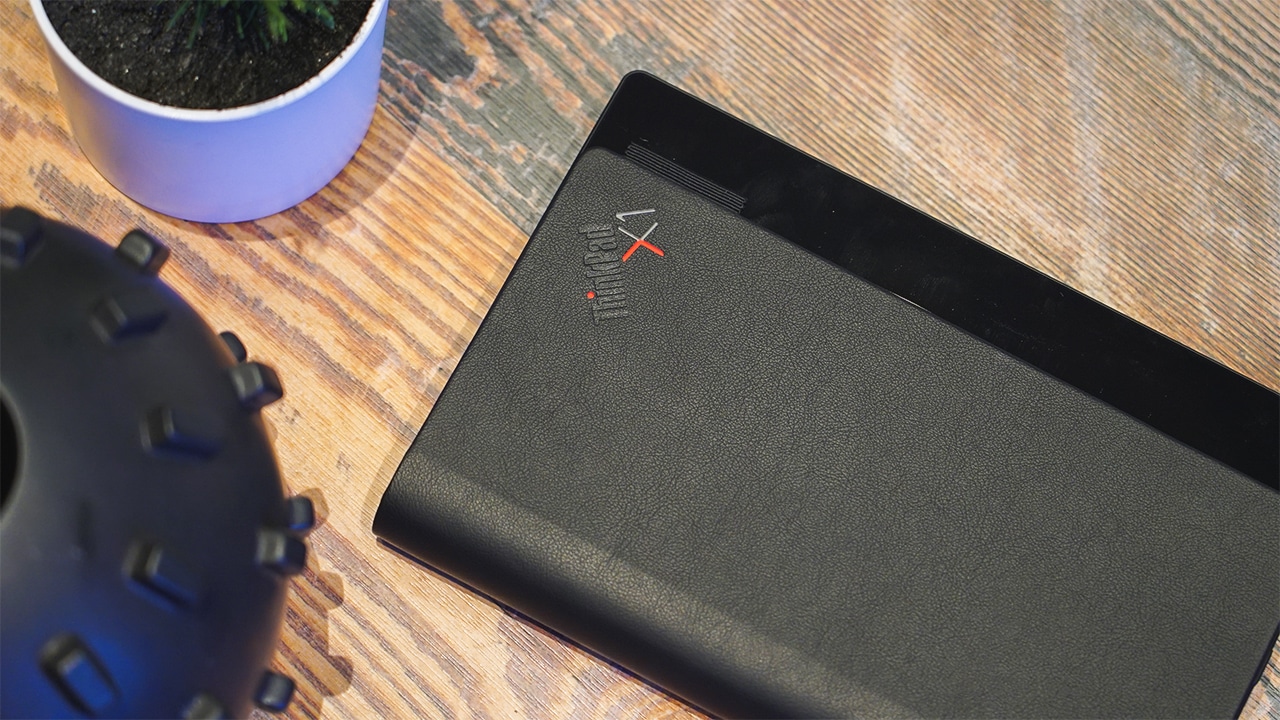 Last year in the midst of a foldable smartphone war, Lenovo showed us that a computer with a foldable display was also possible.

At that time it didn’t come with a name. Or specs. Or a launch date or a price. But all of that changes here at CES 2020.

What makes the Thinkpad X1 Fold so special? If you saw our preview video you would know, but if you didn’t don’t worry, we got you covered.

It’s not just a computer, its many things.

It’s a huge 13.3 tablet with an OLED display that folds close just like this. When shut, it looks just like a notebook complete with its built in leather folio cover.

You can also hold it like a book and and enjoy an e-book the way you would regular books. Use it with a pen, and it’s a notebook! 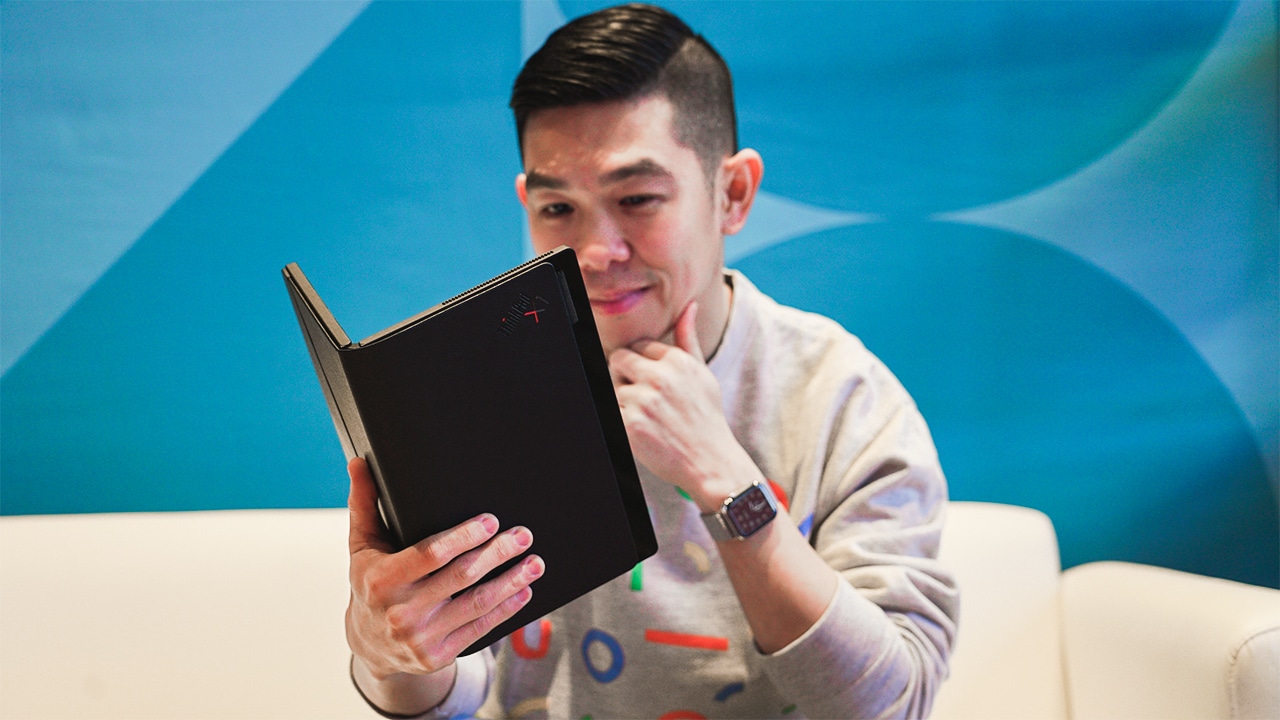 You can fold it horizontally too and the bottom half turns into a virtual keyboard. Or, and we weren’t allowed to tell you before, use a real keyboard.

When the X1 Fold is closed it fits snuggly in the middle of the display, so you can easily take it anywhere with you. Flick open the kickstand to use the tablet as a monitor and control everything with the physical keyboard.

You could also fold it horizontally and prop the keyboard on one half of the display and use it like you would any laptop. Key travel feels good and satisfying. It connects wirelessly and automatically. And it charges while tucked in the middle of the display.

The keyboard and pen are bundled and come free. 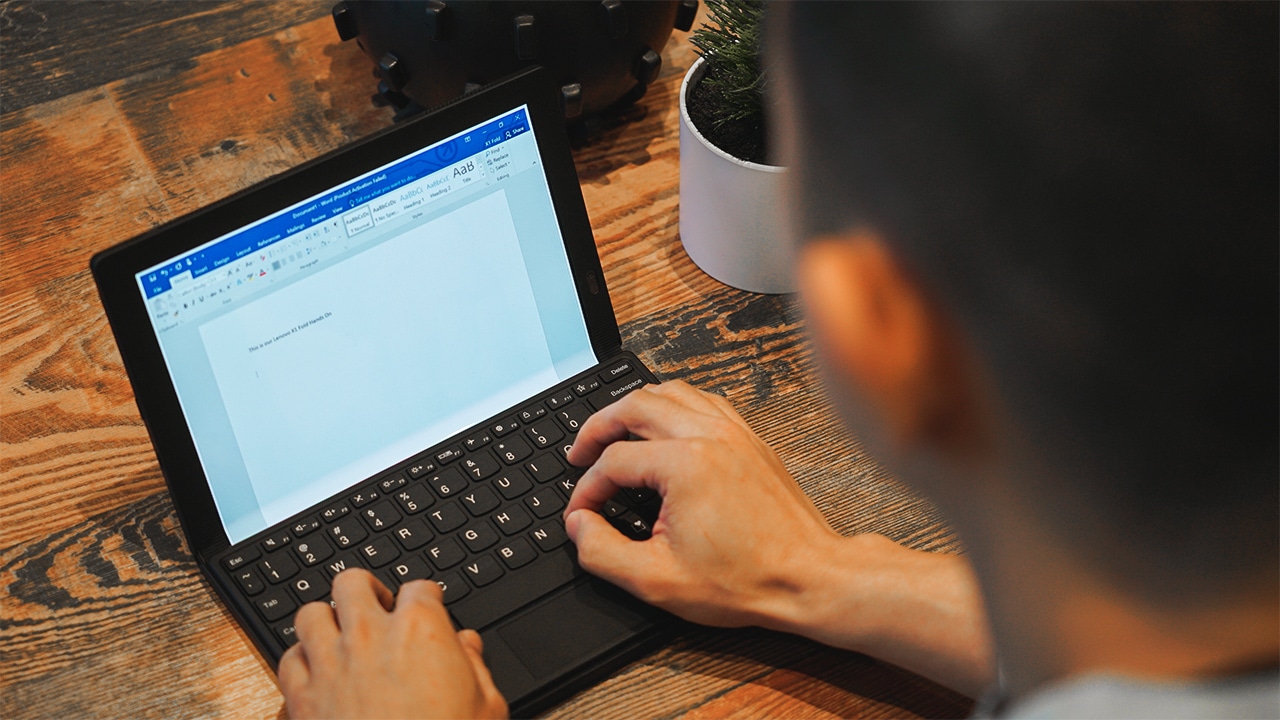 But Lenovo will also sell a stand for propping it up when you want to connect it to an external monitor. Yes you can do that do.

Another thing we weren’t allowed to show you before is its hinge mechanism. The secret sauce that allows it to fold and unfold like this.

It’s worth pointing out. While the durability of flexible displays is still questioned, Lenovo is willing to risk the name ThinkPad — a brand that’s synonymous with durability and performance.

Now that the design is final. We can also now share button and port placements: Two USB-C ports. One on the bottom, the other is on the right along with SIM card slot, volume button, and the power button.

At launch Lenovo will first be offering a model with a full version of Windows 10 Pro. A version with the upcoming Windows 10X is eventually coming. 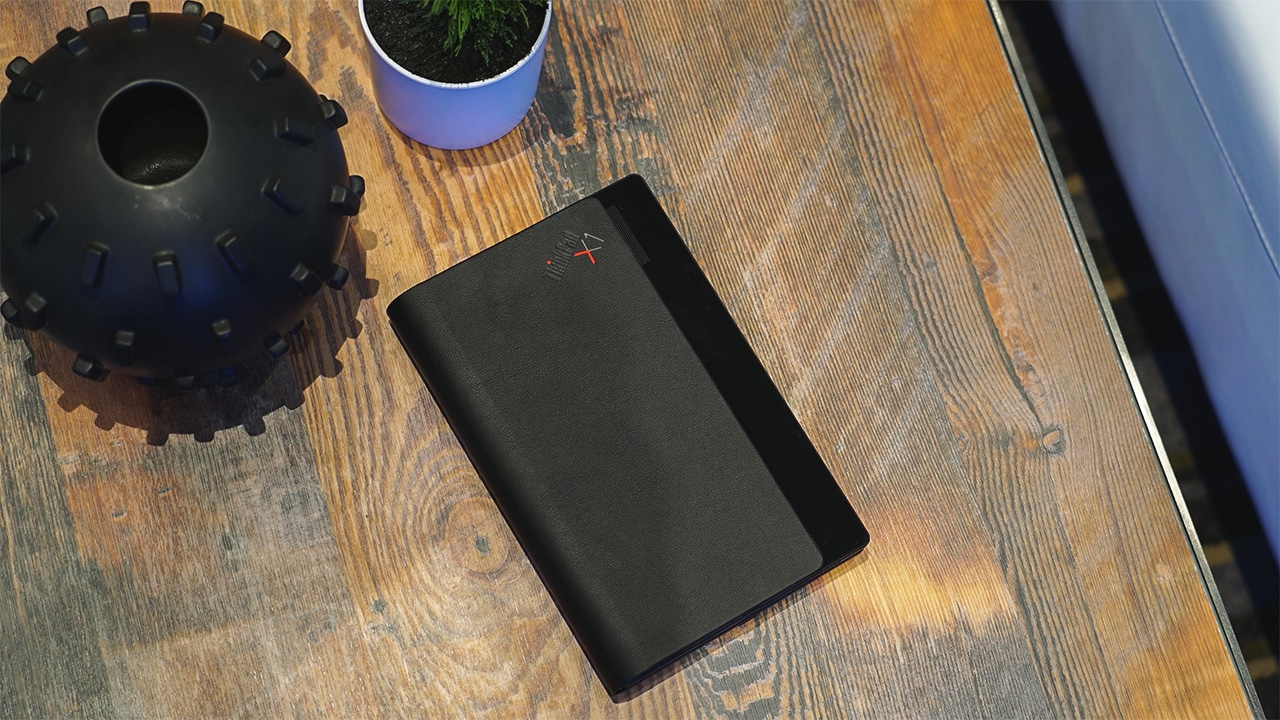 Because many of you will ask. Here is the spec sheet: You get the latest Intel processors, up to 8GB of RAM and 1TB of storage.

While the future of computing is still being debated. A versatile device like the ThinkPad X1 Fold is exciting and makes sense. It’s an idea we can get behind. And it’s one of GadgetMatch’s Best of CES 2020 Awardees!

The question now is people will go out and buy it. Would you?