Here’s some news that’s sure to spark the Android versus iOS debate. According to research done by Apteligent, Android 7.0 Nougat is much more likely to experience network problems as compared to iOS 10. On top of that, Nougat is even more unstable than Android 6.0 Marshmallow and older versions.

The statistics are quite alarming, considering how the seventh version of the Android operating system is built on an already established backbone. It’s more surprising when you realize how low the adoption rate has been so far.

As you can see, Nougat has a network crash rate of 20 percent, while Marshmallow has a rate of 11 percent, and 5.0 Lollipop is much lower at six percent. This is a far cry compared to iOS 10, which has a crash rate that’s consistent with previous iOS versions at only eight percent.

It’s obvious why this information isn’t too widespread: Google’s latest mobile OS has been installed by only 0.2 percent of all Android users. It’s been around longer than iOS 10, and yet, Apple’s OS is steadily climbing up the ranks with an 18 percent adoption rate. Blame slow software developers and negligent smartphone manufacturers for Android’s never-ending fragmentation.

This information translates to Nougat having network-related problems in one of every five crashes. The problem is expected to slow down once Nougat’s user base grows, but Apteligent notes that Marshmallow was the most stable Android OS when it was first released. Version 7.0 is experiencing the opposite. 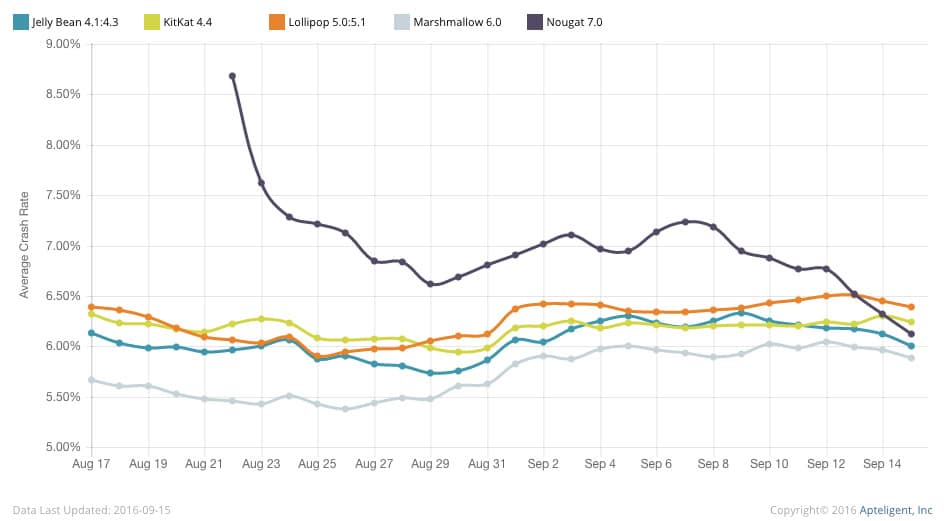 The good news is that since the data gathering began last month, Nougat has already shown signs of improvement in overall stability, but is still nowhere near the gains of iOS 10. Time will tell which one will be the stability king; for now, Apple has the more reliable OS.

Using the definition provided by Apteligent, a network crash is defined as a “crash in a mobile app caused by a network call” — pretty straightforward. A common instance is when a cloud service returns bad data to the communicating app, the app either receives an error, takes too long for the request to complete, or just fails in responding.