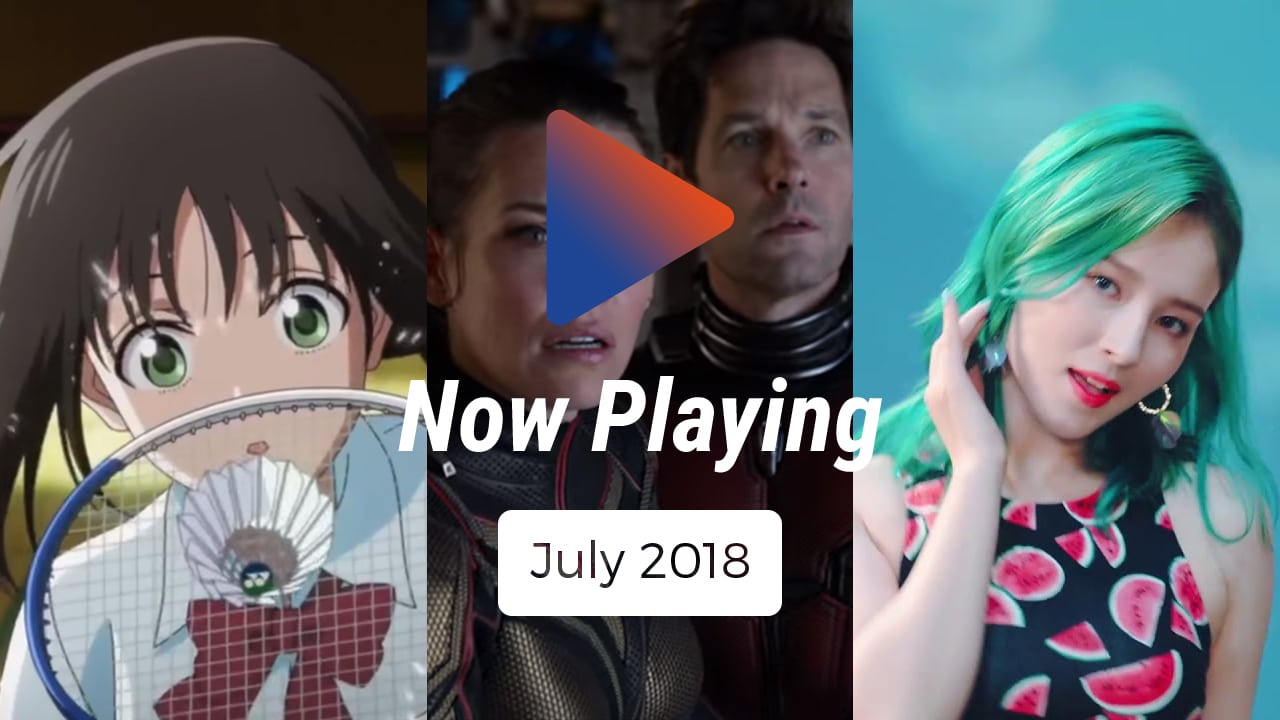 Since the start of the year, GadgetMatch has been covering major tech events like CES, MWC, Computex, and E3. July is the month wherein the GadgetMatch team finally gets to slow down a bit to relax before the next wave of events comes up. If you’re curious about what we’re up to, here’s what’s now playing for GadgetMatch.

Ant-Man and the Wasp
Marvin: If you still haven’t moved on from the catastrophic ending of Avengers: Infinity War, Ant-Man and the Wasp should be able to turn those sad tears into tears of laughter. It mimics the original movie in terms of action and character development, yet isn’t afraid to make fun of itself and the superhero genre in general. Like always, be sure to stick around for two scenes during and after the credits. They fit into the Marvel Cinematic Universe in a… dramatic way.

Isle of Dogs
Chay: The long wait is over, Wes Anderson fans. His latest film is his second animated masterpiece, this time set in a dystopian Japan that centers around the search for a dog exiled to Trash Island. Like most, if not all his films, Isle of Dogs is filled with themes of melancholy and disappointment, and sometimes hope, depending on your own interpretation. Whether you watch it for Anderson’s iconic style or your love for dogs, what we have here is a classic that needs to be watched at least more than once in your lifetime.

Hanebado!
Rodneil: The future is female, and for the first time in recent sports anime history, the main characters are mostly women! Hanebado opens with a riveting badminton sequence between freshman prodigy Ayano Hanesaki and third-year student Nagisa Aragaki. Hanesaki struggles with her desire to play while Aragaki struggles with working hard but still falling short. If you enjoyed titles like Haikyuu!! and Yuri on Ice, Hanebado! is definitely worth checking out.

GLOW
Kevin: The Gorgeous Ladies of Wrestling are who you’ll need if you’re looking for a well-written TV series that fuses drama, female empowerment, and the poofy hair of the 80s. It’s about a group of women with different backgrounds but have a common reason to stick it out together. The second season was released last month, and it’s filled with the same gems we loved from the first season.

Music to listen to

BAAM by Momoland
Rodneil: I’m not even gonna lie, this is really more about the visuals for me than the actual music, but as I watched from one version of the music video to another, the song eventually got stuck in my head. It has a nice perk-you-up vibe to it, similar to “Boom Boom” which is the song that propelled Momoland beyond South Korea’s airwaves. In case it’s not obvious, Nancy is my main bias and Yeonwoo is a close second.

Summer Pack by Childish Gambino
Kevin: Just like his This is America track, Childish Gambino (a.k.a. Donald Glover) dropped new tunes out of nowhere late this week. He didn’t only release one, but two fresh originals. Together, they’re called Summer Pack and the two-track release consists of “Summertime Magic” and “Feels Like Summer.”

While both have that laid-back, relaxing vibe, “Summertime Magic” has more of a dance approach between the two and would go well on the beach while sipping on Pina Colada. “Feels Like Summer,” on the other hand, makes you want to take a stroll downtown in a convertible and spark a fatty.

InShot
Rodneil: InShot is a mobile video editor available on both Android and iOS. With it, you can splice together clips you have stored in your phone and even choose the aspect ratio, whether it’s 1:1, 16:9, or 9:16. There’s also an option to add effects, text, and music that’s also stored in your phone. It’s a pretty powerful video editing tool on mobile — one that can help jumpstart your IGTV career.

Events to check out

AsiaPop Comicon Manila 2018
MJ: Once again, AsiaPop Comicon is back in Manila from July 27 to 29, 2018, to be held at the SMX Convention Center. Marvel plans to show what’s new in the Marvel Cinematic Universe, while Netflix returns to premiere a never-before-seen film. It’s also expected to be bigger and more exciting than last year’s event. Finn Jones from Game of Thrones and Tye Sheridan who appeared on Ready Player One and X-Men as Cyclops, are the major celebrity guests to attend.

Did you like any of our picks or have suggestions of your own? Feel free to let us know in the comments section!