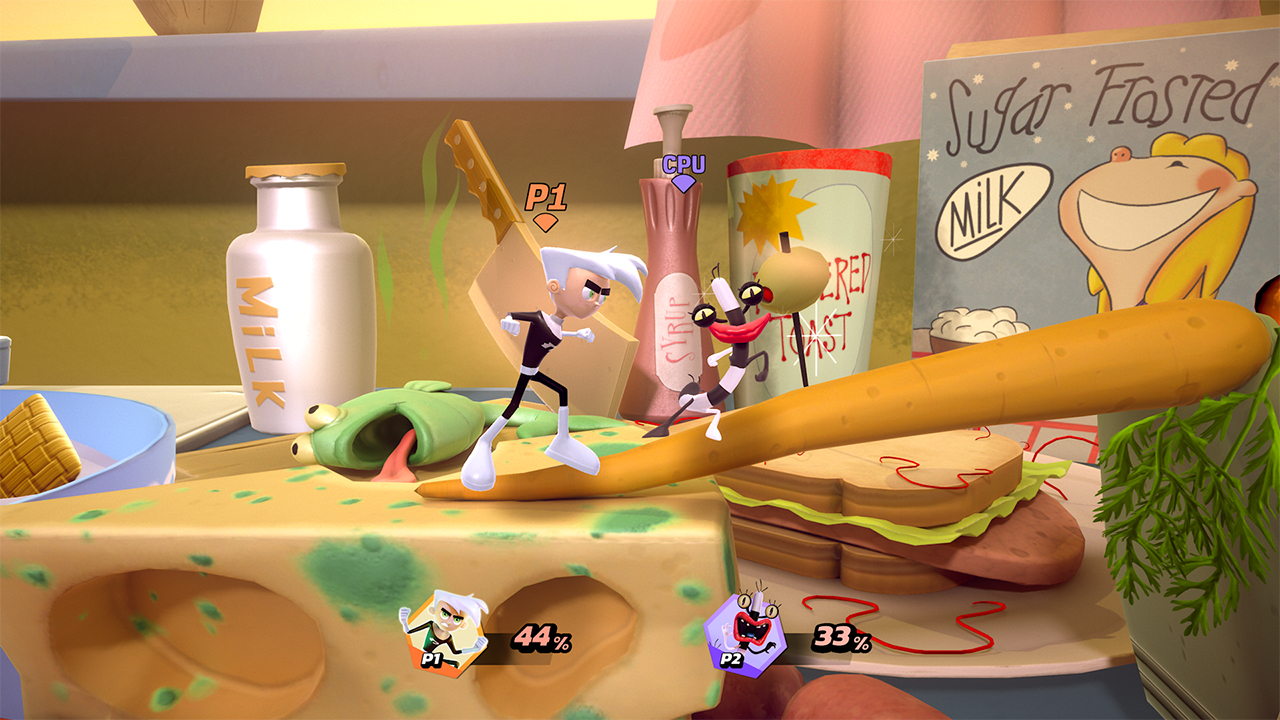 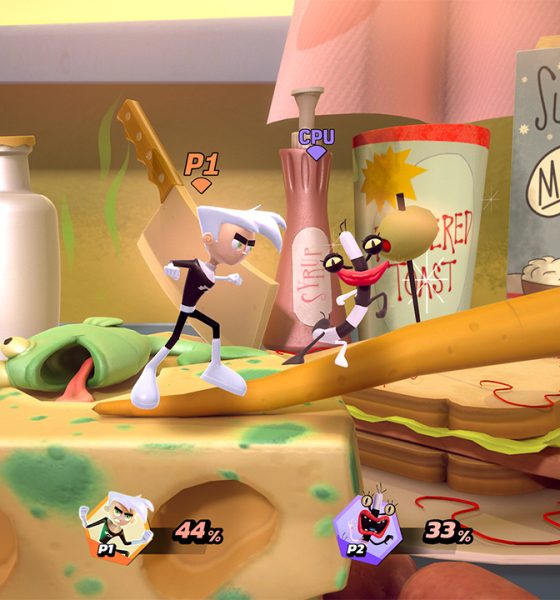 Nickelodeon All-Star Brawl then and now: A work in progress

It could be the perfect competitor for what it’s worth

Back in October 2021, our childhood came calling with the release of Nickelodeon All-Star Brawl for current and next-gen consoles. Safe to say, our favorite Nickelodeon stars want to step into the realm of fighting games that resemble something very familiar to everyone at this point. Of course, I even went out of my way to claim that this game is “Super Smash Bros. but with Spongebob and Patrick.”

Even early on, I wouldn’t be wrong about making that statement. From the gameplay, stage design, to battle strategies, it’s a Smash clone through and through. Yet, it supposedly finds ways to be a bit different than the very game it’s imitating. So, for this review, we’re doing things a bit differently to see whether this game truly is worth giving a shot.

Smashing your way to victory

In every basic aspect of platform fighting games, Nickelodeon All-Star Brawl is clearly much like Smash Bros. and I honestly don’t blame it for being that way. In terms of overall combat mechanics, it nails every basic command that seasoned Smash players know and love/hate. Of course, in both games, the aim of the game remains the same: fight to the death, last fighter standing wins… you know the drill. 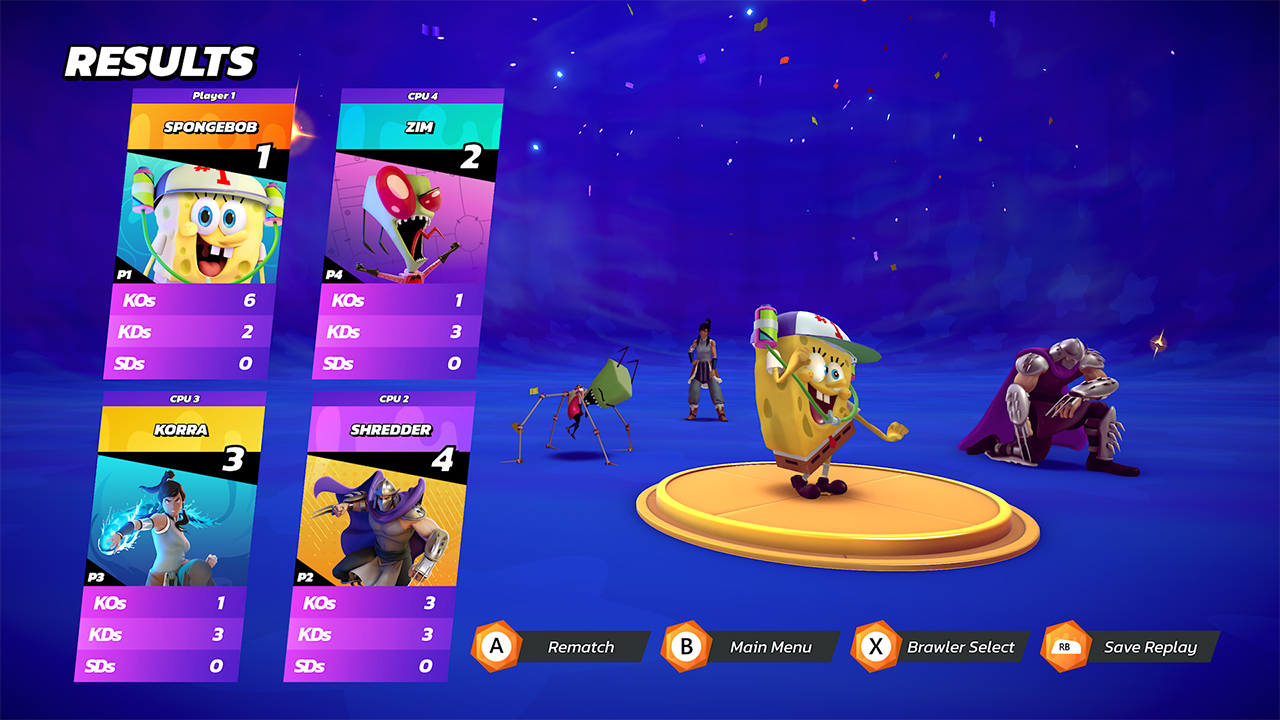 Although, there are things that All-Star Brawl does differently that makes it rather beginner-friendly on the onset. For starters, I felt there was less RNG built into this game with the lack of objects you can throw at each other. Instead, this game opts to include the objects as individual character projectiles, which you can defend against rather easily. 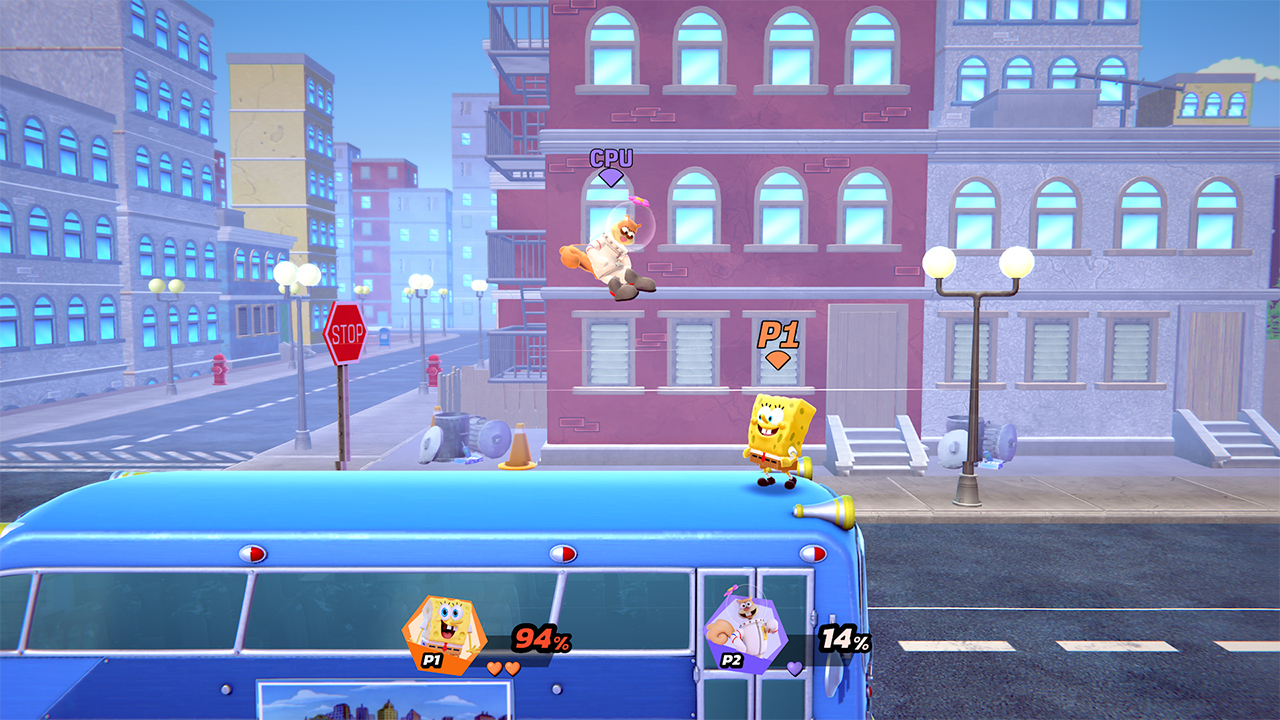 Who is the true master of karate?

Secondly, the stages you play in also offer a variety of easy-to-move-around battlefields to areas where you will surely fall off if you’re not careful. Also, there are stages with elements that can affect you and your enemies, but don’t instantly kill you in the most random way possible. With all of these, it allows new players to try and learn the ins and outs of the game without being a total rage-fest from start to finish.

This is, in my opinion, the biggest selling point of the game: the characters themselves. Honestly, this game brought back so many memories of my childhood that fighting as either SpongeBob SquarePants or Danny Phantom brought a smile to my face. During its launch, the game had 20 playable characters from across 13 different Nickelodeon-owned franchises, which is a good number to start. 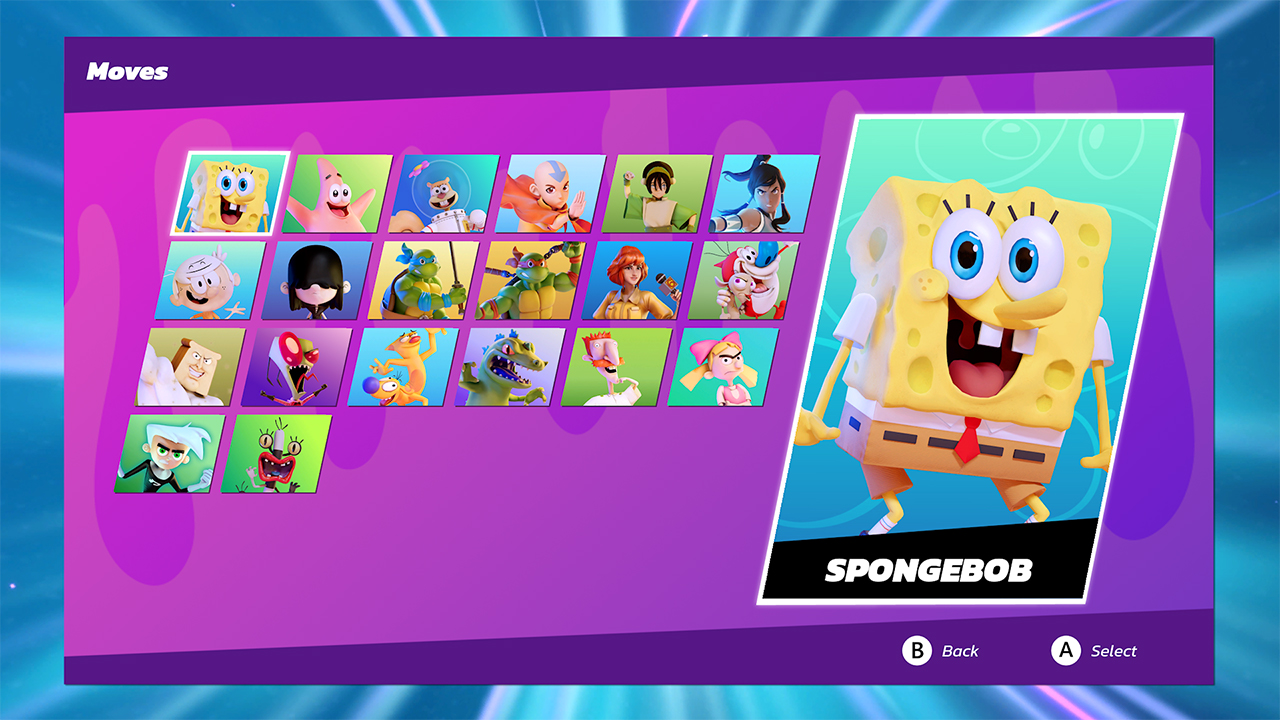 Original 20 characters from the game’s launch back in October

Each character has its own unique set of moves that reference their attitudes and behaviors in their own respective franchises. From Sandy Cheeks’ high-powered karate chop to Nigel Thornberry’s “mmm smashing, yes” techniques, the game represents these characters quite well. I mean, they even have that SpongeBob meme as a taunt, so that’s a win in my book!

Granted, of course, there are some characters from newer franchises added in there for a more diverse cast. After all, this is a kids game with the same premise as Smash Bros.; if kids grew up watching Nickelodeon instead of playing Nintendo games, this is one way to get them to play this game with their friends and family members.

Initial outlook after the hype

Overall, Nickelodeon All-Star Brawl provides a rather similar take on platform fighting games like Smash Bros., but it tries to be its own thing. When you look past all the glaring similarities in game mechanics and stage design, this game presents a different experience solely riding on the cast of characters you have at your disposal. Sure, it’s not Mario vs. Pikachu, but you can recreate that SpongeBob vs. Patrick fight over and over again. 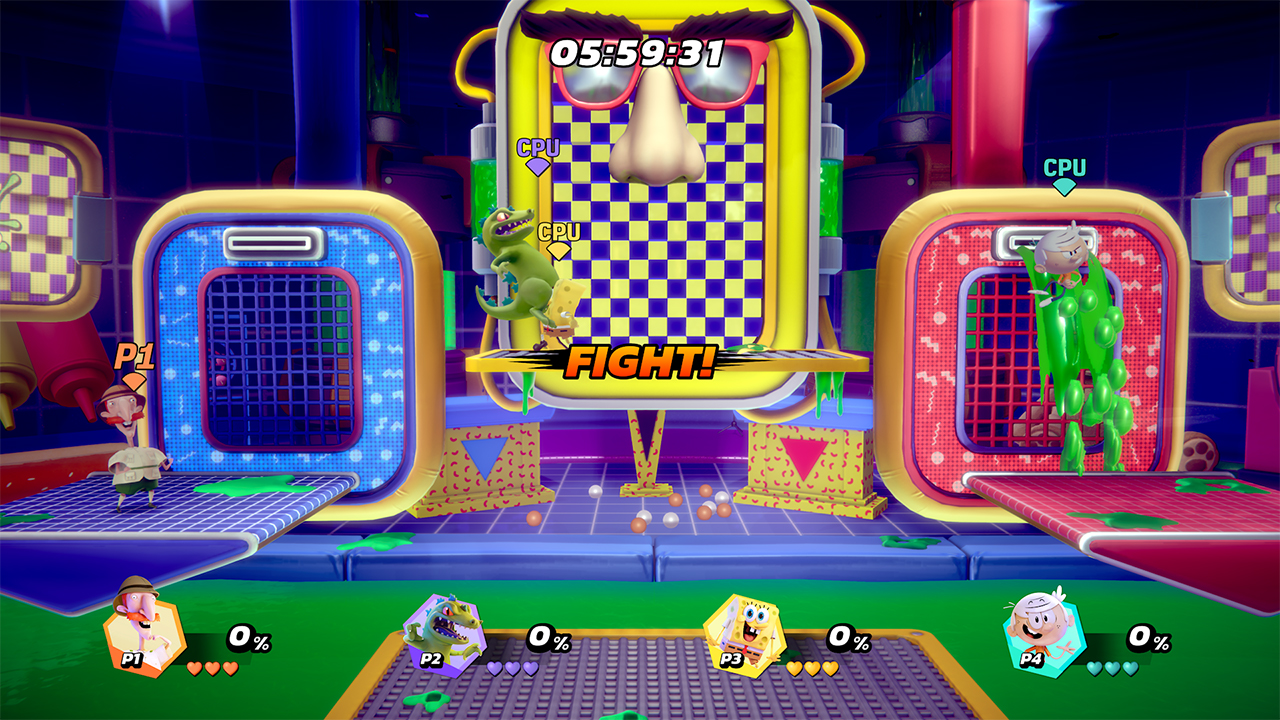 I’m not exactly as high on it with other games because of the other title it’s competing against. I know it has a long way to go if it wants to compete against something like Super Smash Bros. two weeks into release. However, I still think that this is a good start for a game that wants to rival arguably the most popular platform fighting game of this generation.

Although, this was two weeks since release. I decided to play this game again after a few months, not knowing if anything had changed since then.

Four months later, how does it stack up?

To this game’s credit, four months later, it maintained everything I noted on since its release. In essence, it’s still a platform fighting game with Nickelodeon characters at center stage. This time around, there are things I’d like to call out after this game gained numerous patch notes and underwent several changes along the way.

Improved gameplay with all the patches 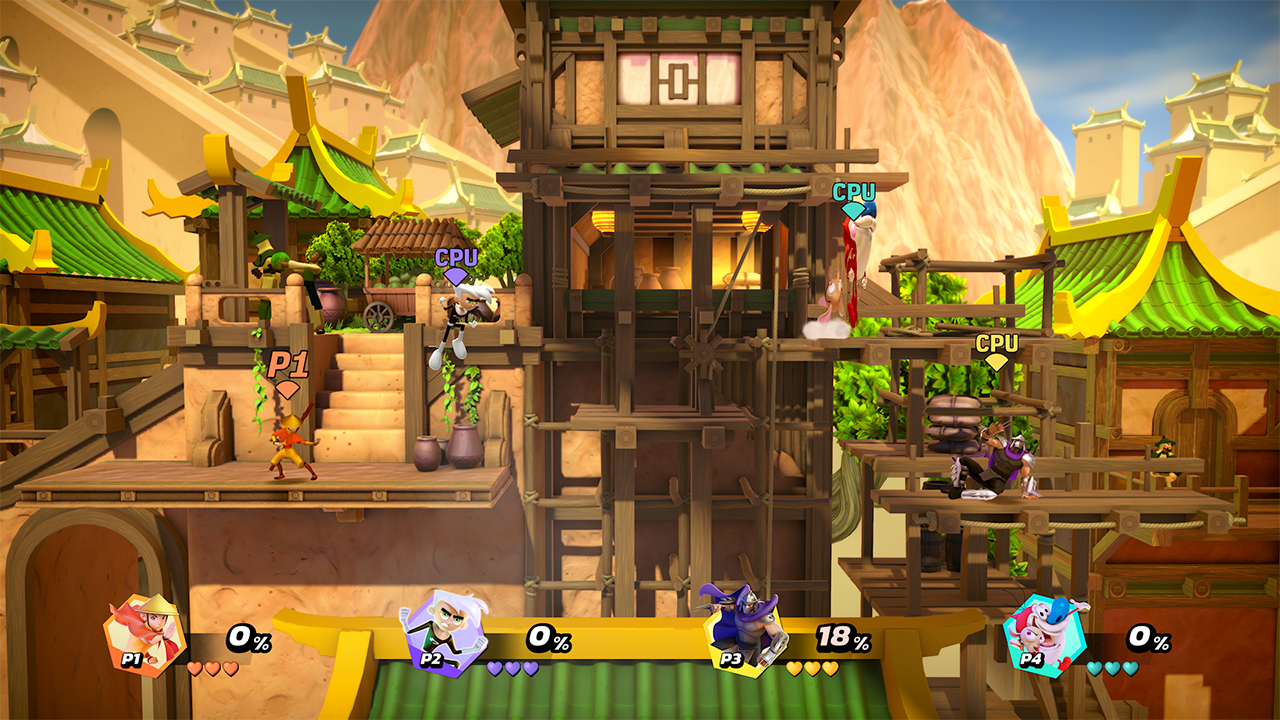 If I’m being honest, early on, I felt that the games finished rather too easily or too quickly thanks in part to the gameplay mechanics. I noted several characters with attacks that seemed completely broken in terms of damage and hit boxes, that a timer simply didn’t matter. Also, some stages were not exactly easy to compete in, especially when literally anything can hit you (ehem, Powdered Toast Trouble).

With four months worth of patches, I genuinely felt the match times got a bit longer, the characters dealt balanced damage, but the maps still felt like a chore to move around. Of course, I felt this had to be done especially if there are characters that genuinely felt overpowered to use (SpongeBob and Ren and Stimpy, in my opinion).

Also, I want to touch on online play as well, considering I didn’t really do this within the first two weeks of launch. Honestly, I’m glad I started playing online now rather than before because of the gameplay improvements, plus I could actually queue with people this time.

But why keep the character count scarce all this time?

Although, one of the biggest gripes I had in the four months since I last played was the lack of new characters introduced. As of the time of writing, Nickelodeon All-Star Brawl added a grand total of TWO new characters for free via DLC: Garfield and Shredder from TMNT. I understand that they worked on everyone else in between, but there were so many opportunities to include other characters into the roster. 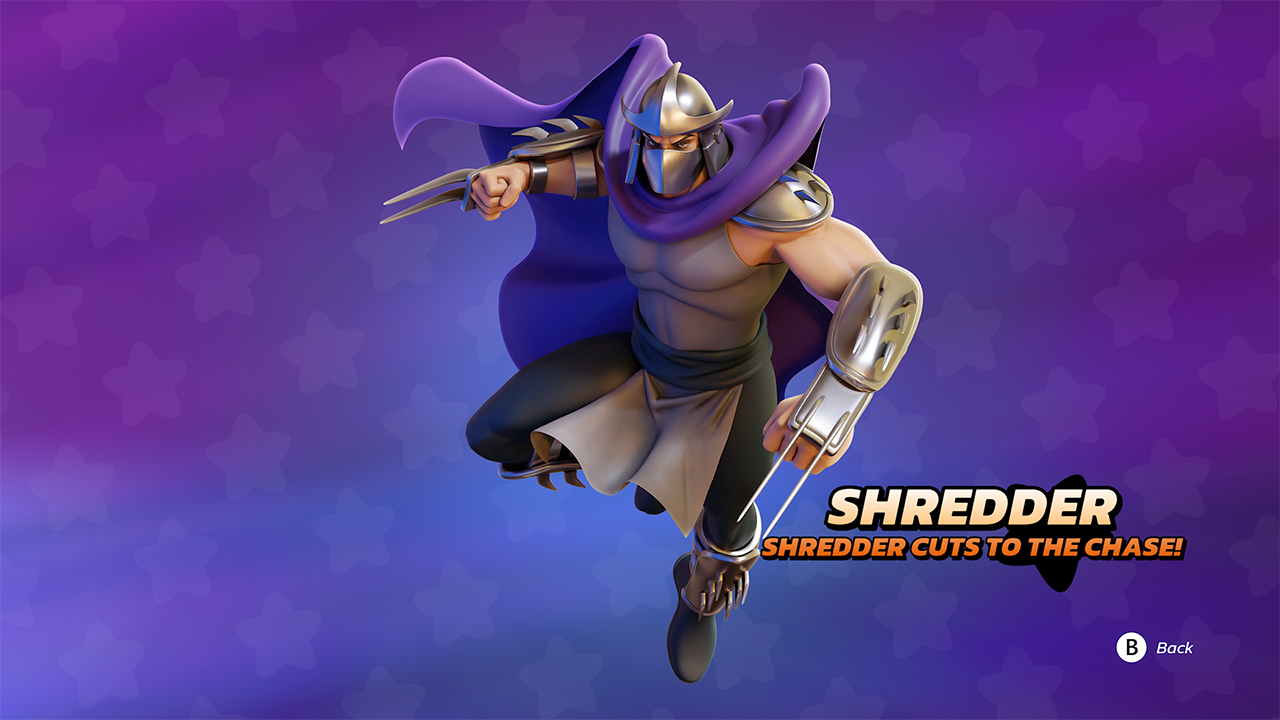 Shredder from Teenage Mutant Ninja Turtles; added to the game from the February update

On the top of my head, you can put Squidward Tentacles and Arnold in there, since they’re also iconic and rather popular Nickelodeon characters. Also, there are other storied franchises that deserve inclusion, with characters from The Fairly OddParents, The Adventures of Jimmy Neutron, Boy Genius, The Angry Beavers, and Chalkzone, among others. 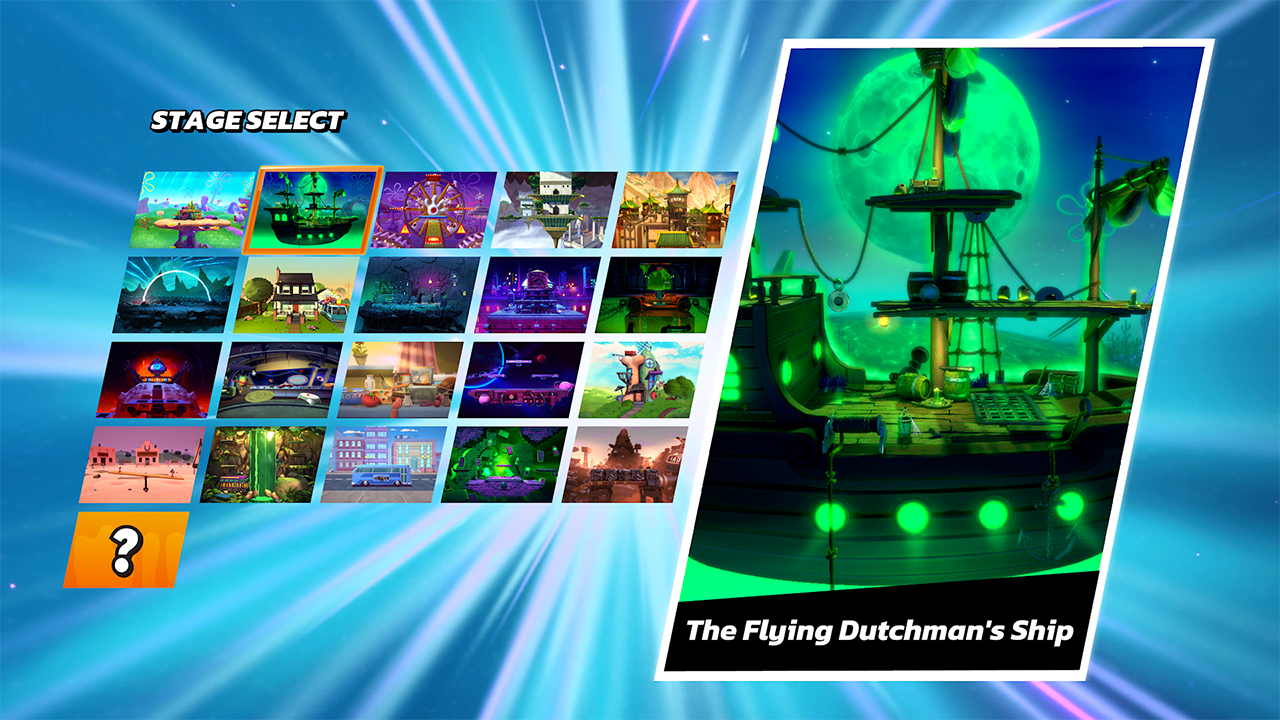 Initial selection of stages from the game’s launch; hope they could add more later on!

Sure, there will be future updates that might have these characters in the pipeline, but I honestly felt that they could have done so much in four months. If you want to rival Smash Bros., beef up the roster to add more madness to the brawl!

So, is it worth playing all this time?

I said it before, and I’ll say it again: Nickelodeon All-Star Brawl is a rather unique take on a platform fighting game mostly because of the characters you play with. In terms of the gameplay formula, Super Smash Bros. really set the tone for every other publisher out there that wants to create something similar. In essence, All-Star Brawl became another one of its clones that I still think comes close compared to others. 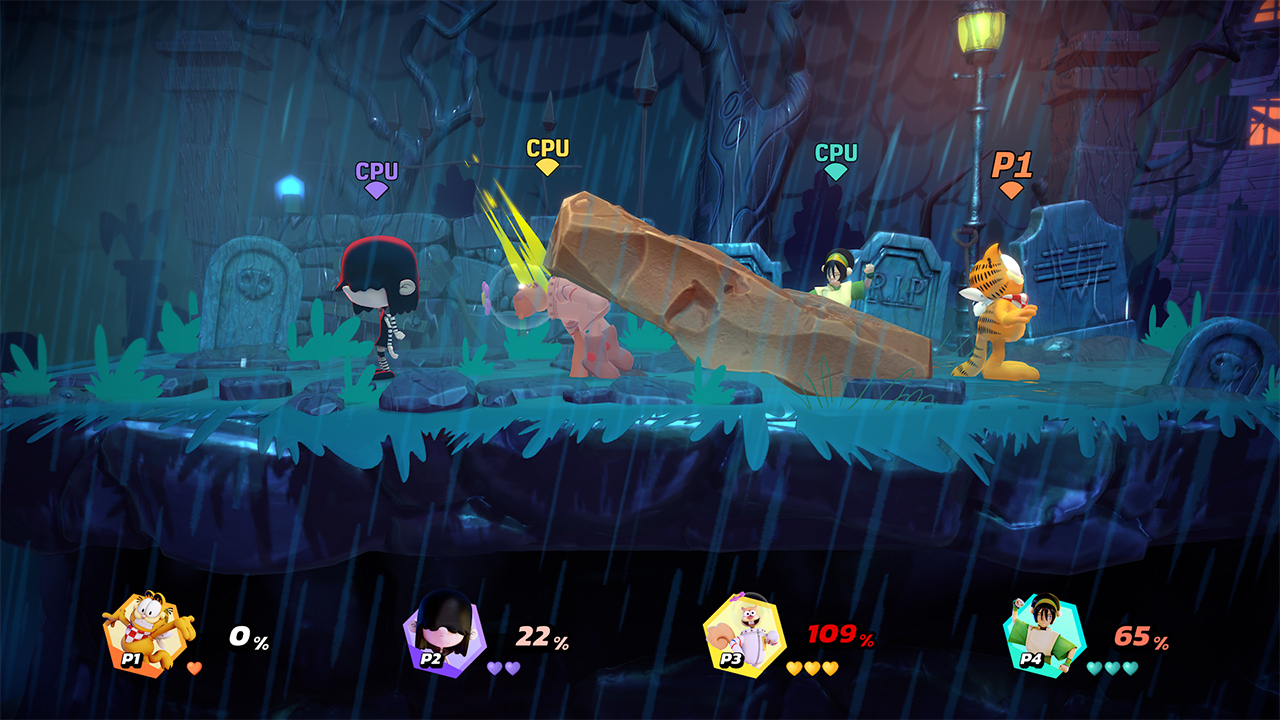 After playing this game again after four months, I would still call it a work in progress — and that’s a good thing. In terms of what it lacks compared to its rival, I think there’s still so much room to grow and so much time to do so. Gameplay-wise, it’s still exciting and heart-pounding (and possibly controller-smashing, too).

I still urge you to give this game a try, especially if you don’t have a Nintendo Switch and something like Brawlhalla doesn’t suit you. Yes, it still has a lot of catching up to do, but this game still deserves some recognition for doing things a bit differently. 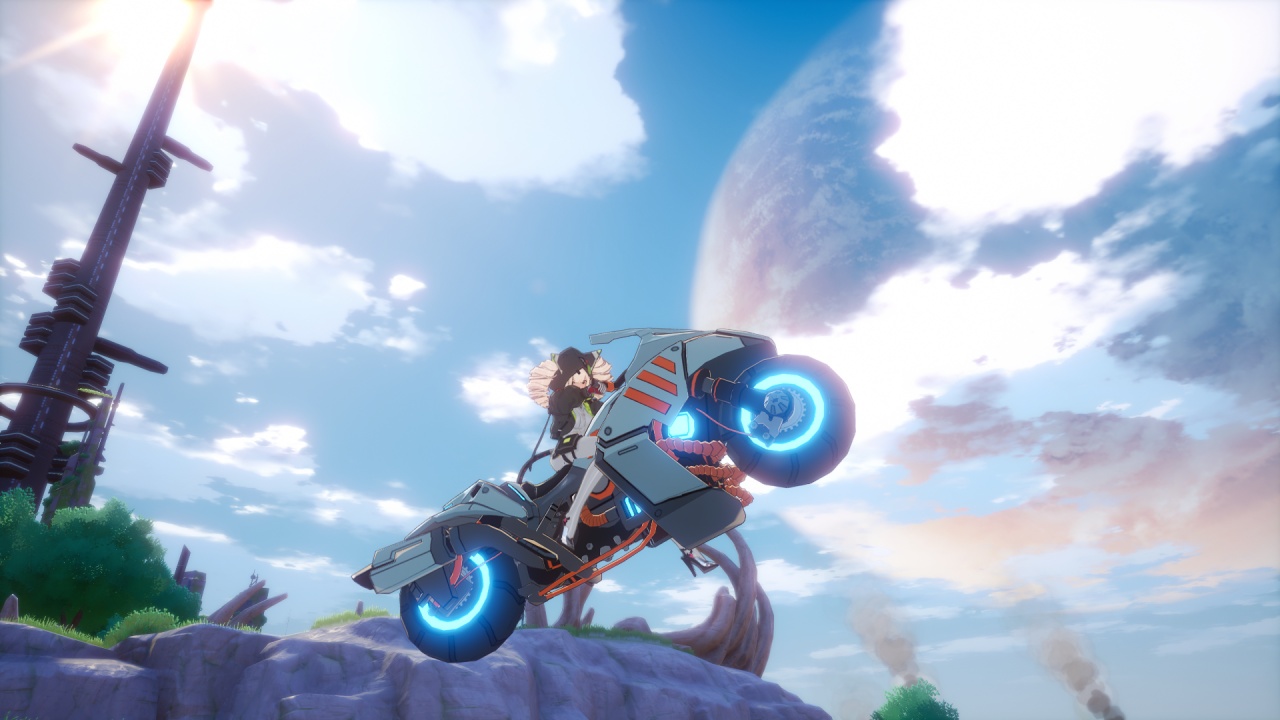 Upcoming open-world action RPG Tower of Fantasy (Level Infinite/Hotta Studio) is now open for pre-registration, with lots of rewards in store for users.

It is set for global release in Q3 2022 for PC and mobile. The title may now be added to Steam and Epic store wish lists.

The game’s developers will unlock different rewards for users as the number of pre-registered players increase.

The more people sign up for, the more luxurious the rewards issued at the launch will be. They are divided into the following tiers: 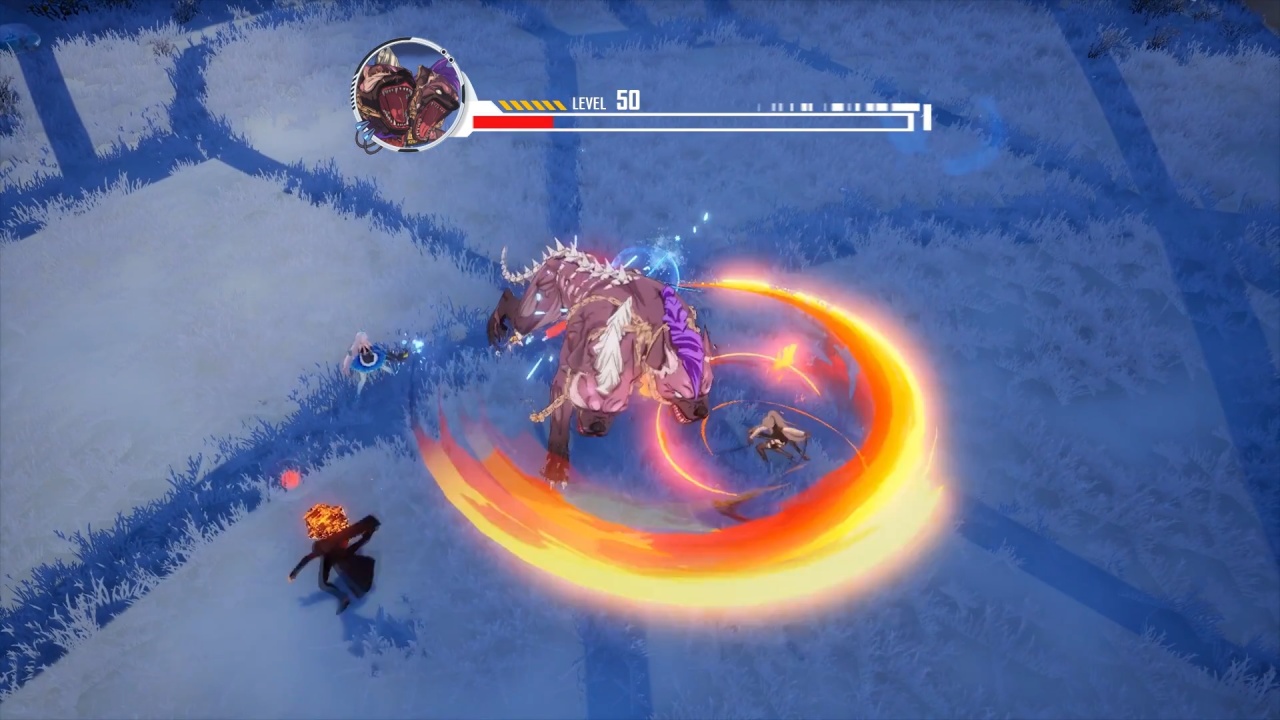 The open-world action RPG is set to rival Genshin Impact, which as of March 2022 has anywhere between one to three million monthly active users.

While this might be tough to replicate, such pre-launch gimmick boosts Tower of Fantasy’s anticipation for a generally positive and warm reception when it releases officially.