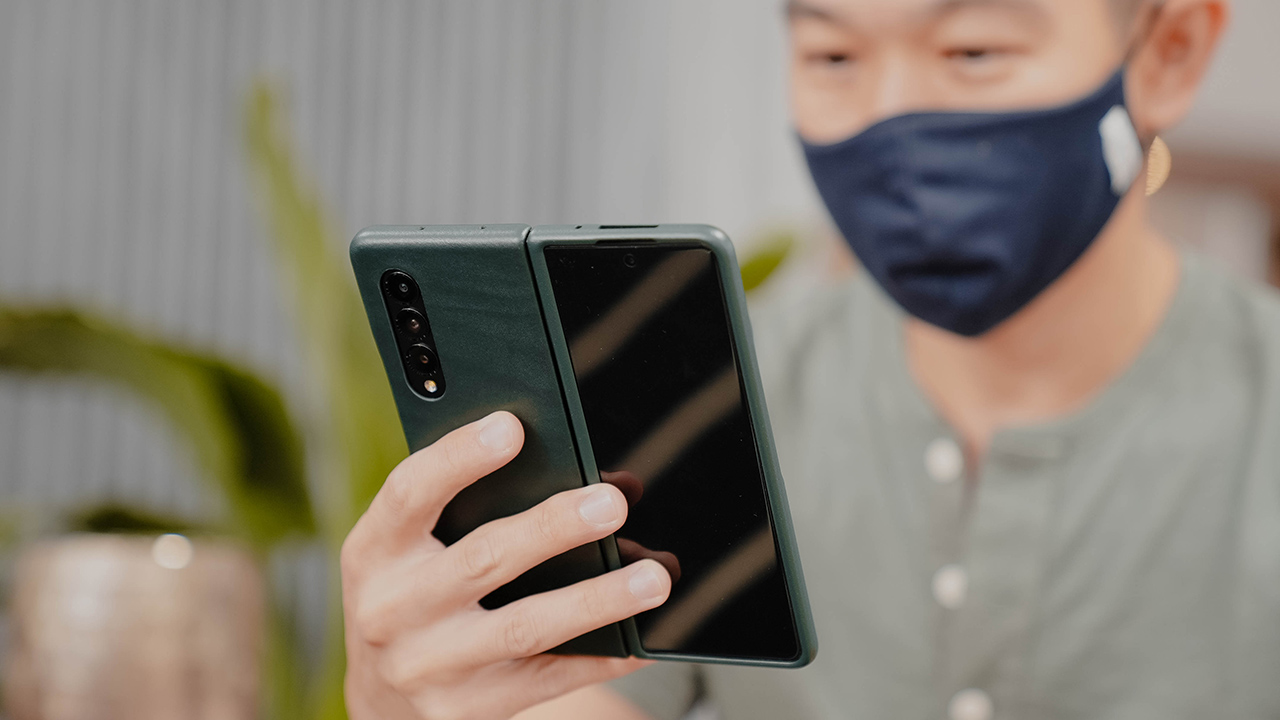 It’s Samsung’s third crackt at a foldable and it’s looking more refined as ever. The Samsung Galaxy Z Fold3 5G is here and it’s coming to Singapore.

The biggest challenge of the foldable form factor has been software. Naturally, there won’t be that many apps that could maximize, let alone scale properly to the Galaxy Fold. Three years in, and it’s significantly changing.

Samsung has expanded their partnerships with multiple companies that handle apps to ensure that they are maximized on the Fold form factor. Some of them are the most used ones today like video call apps Microsoft Teams and Zoom.

Apps like Spotify and YouTube should also now work better and feel more organic on the Galaxy Z Fold3. But it doesn’t stop there. On the settings menu, you can turn on the Labs feature which lets you customize the size of your app window so you can use it alongside other apps.

Then there’s the Under Display Camera. From the eyesore that it was on the first Galaxy Fold, to the more subtle but still noticeable punch hole, Samsung is now finally introducing their first crack at an Under Display Camera on the Galaxy Z Fold3 5G.

It’s a 4MP camera that you shouldn’t expect much from in terms of quality. The priority here was to still deliver some form of front-facing camera while ensuring that you get as much screen real estate as possible on the Galaxy Z Fold3. 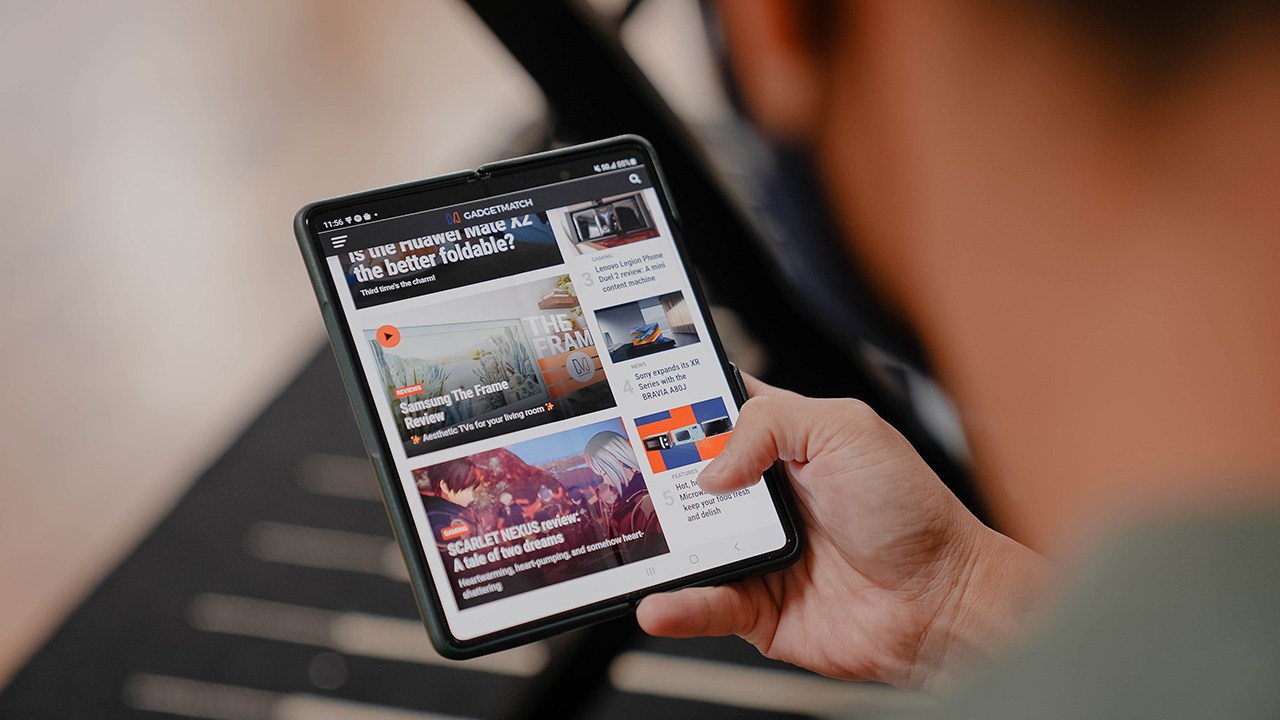 The screen now also has a protective film to prevent accidental scratches. We still don’t know exactly how tough it is but Samsung was confident enough to point it out.

Samsung already said we’re not getting a Galaxy Note this year, breaking the popular device line’s yearly cycle since it first came out in 2011. Fret not though, as Samsung is bringing S Pen support to the Galaxy Z Fold3.

There are two S Pens compatible with the Galaxy Z Fold3: The S Pen Fold Edition and the S Pen Pro. 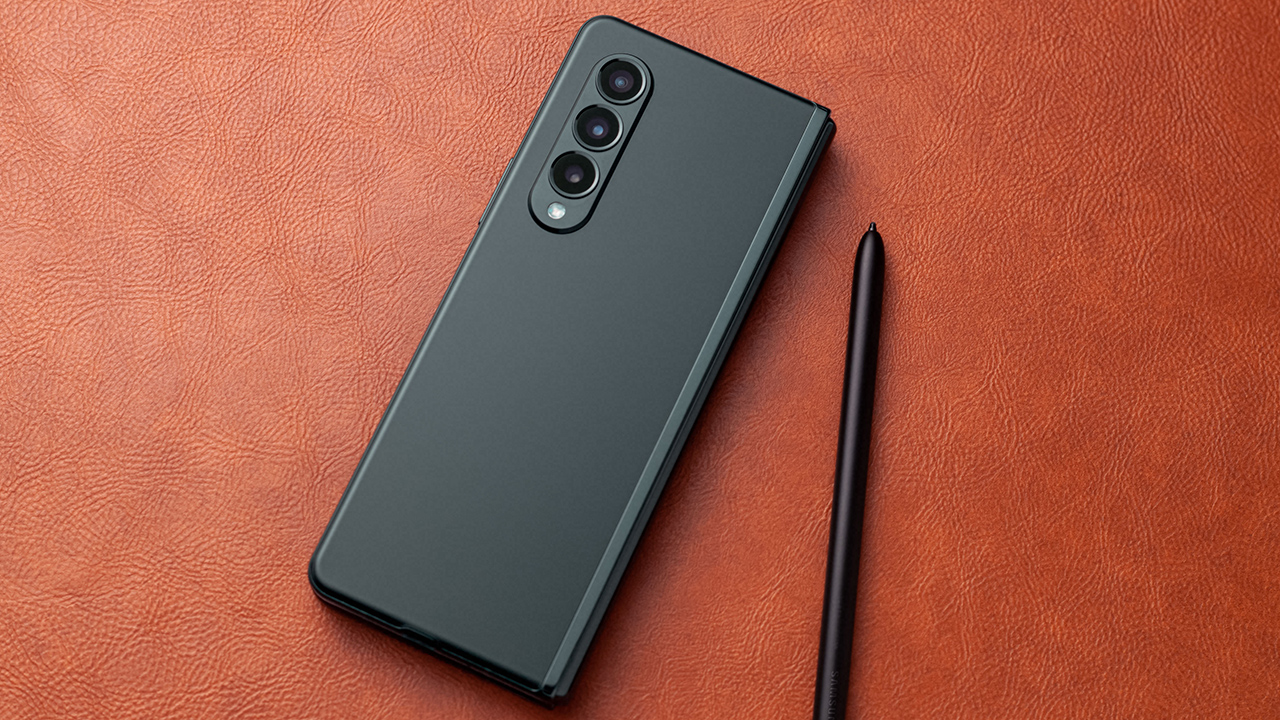 As its name suggests, the S Pen Fold Edition is one that’s made especially for the Galaxy Z Fold3. It measures 132mm and has pretty much all the useful S Pen features we know and love like Air Command, instant screen captures and jotting down notes . There’s also a special cover case for the Galaxy Z Fold3 to be able to carry the S Pen Fold Edition.

Meanwhile, the S Pen Pro is larger at 173.7mm and can be used with other supported Galaxy devices like the S21 Ultra, Note 20 Series, Note 10 Series, Tab S7 and S7+, and the Galaxy Book Pro 360. It also has an onboard memory feature that lets you copy from one device and paste it to another.

Everything else on the Galaxy Z Fold3 is either a rehash or an expected upgrade from its predecessor. Here’s a spec rundown:

Pre-Order for the Galaxy Z Fold3 5G will start on August 11, 2021, Wednesday, 10.30PM. Consumers who pre-order their devices will be able to collect their devices on September 2, 2021, Thursday.

The device will be available for sale in Singapore starting September 10, 2021, Friday, 10AM. Pricing are as follows: 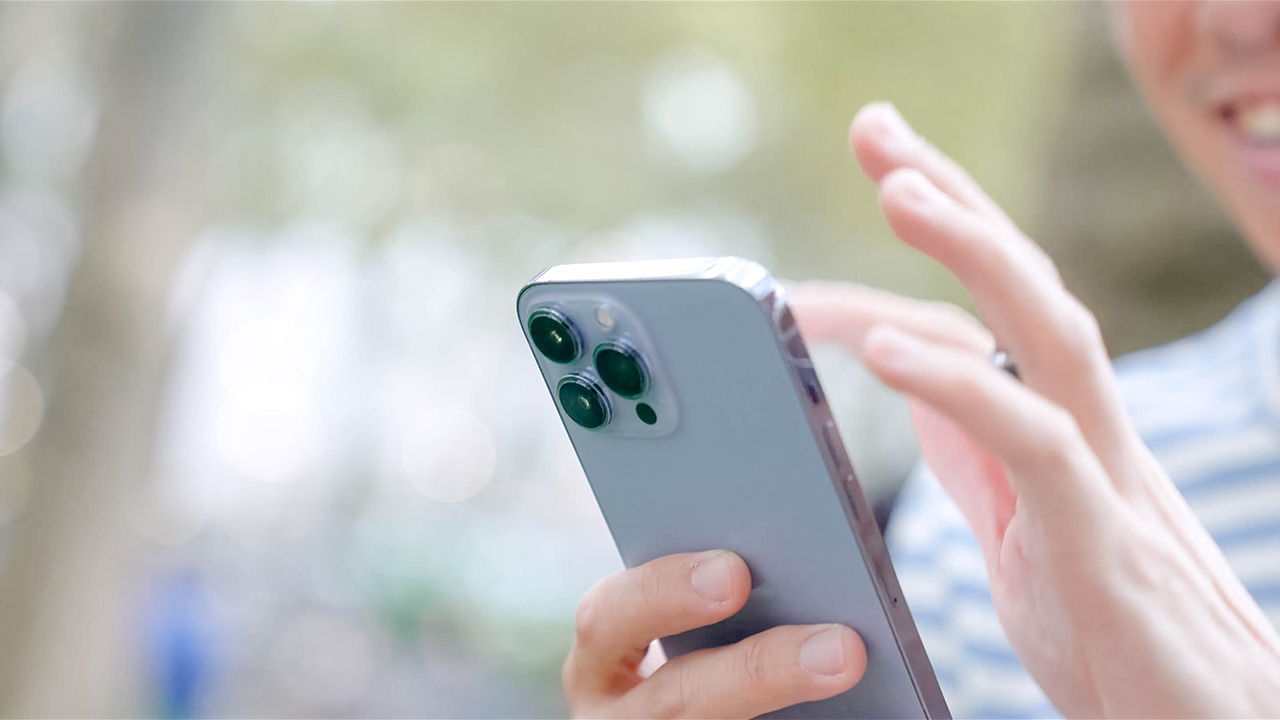 Smartphone cameras have progressed far beyond mere selfies and Instagram shots. Our phones can now take professional shots with the snap of a finger. In fact, some brands have even committed to taking Hollywood-caliber films with known directors and actors. Taking it to the next level, Apple is making it easier for filmmakers to do so by making ProRes video available for the iPhone 13 Pro and 13 Pro Max.

Apple hasn’t been shy about the creative capabilities of the iPhone’s two Pro models. The company previously promised ProRes support back in September during the new series’ launch. Finally, Apple is launching the feature with the iOS 15.1 update released recently.

Apple ProRes video is commonly known as the video format friendlier for video editing. The format makes editing easier on Adobe Premiere and Final Cut Pro X. It minimizes video compression and maintains image quality. Apple first launched the format back in 2007, but the format has slowly eked its way to more devices throughout the years.

Currently, ProRes is dependent on Apple’s new A15 Bionic chipset. As such, older iPhone models won’t get the format.

The feature is currently shipping out with the recent iOS 15.1 update. If you’re trying to get the feature, make sure you have the update installed first. 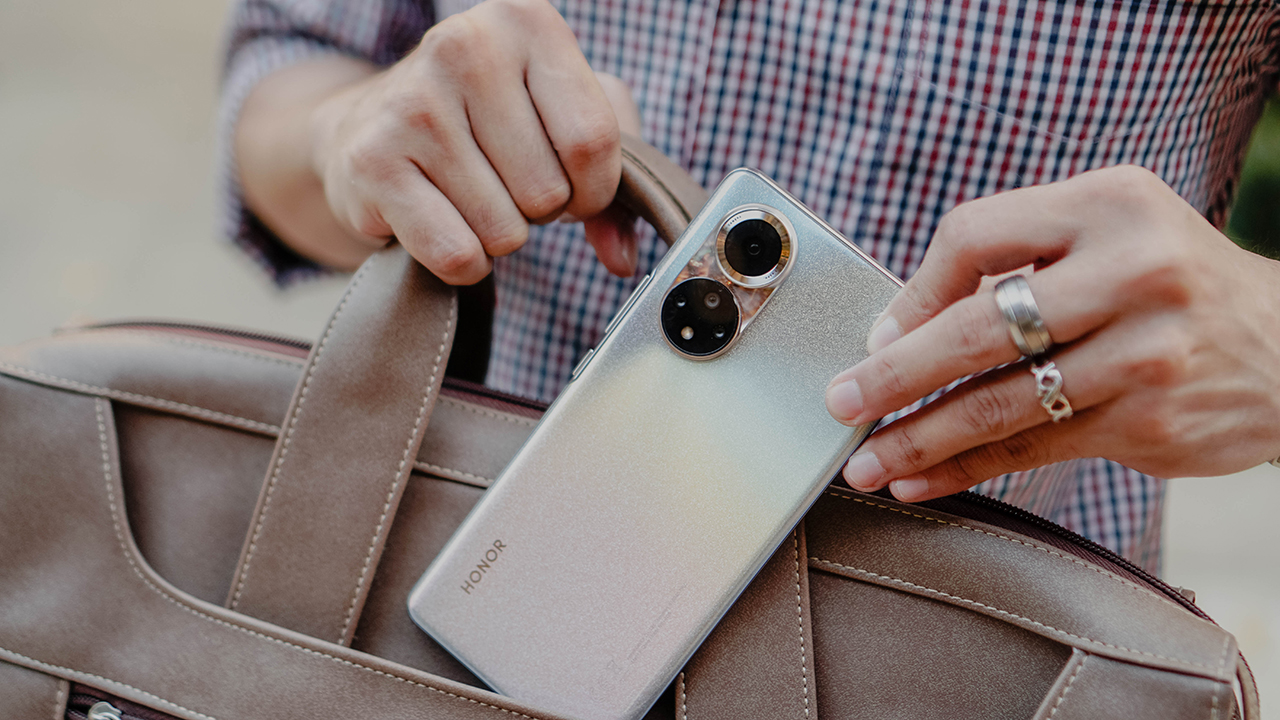 Honor’s bounce back smartphones since parting ways with Huawei is something we’re keeping an eye on. Today, they just launched the Honor 50 and Honor 50 Lite — both still with traces of its Huawei lineage but with Google Mobile Services.

This new pair of smartphones hasn’t strayed too far from Huawei. But operating independently from the company blacklisted in the USA means gaining access to what Huawei lost — Google Mobile Services or GMS.

The Honor 50 is recognizing the growing trend of short-form videos. With this in mind, they put a 32MP front-facing camera with a 90-degree viewing angle so you can shoot for TikTok, Reels, or YouTube Shorts.

On the back, meanwhile, you’ll find the 108MP main camera flanked by an 8MP ultra-wide angle camera as well as throwaway additions 2MP depth, and 2MP macro cameras.

It has a 6.57-inch, 75-degree curved AMOLED screen that supports 120Hz refresh rate. If you’re into mobile gaming, it also has a 300Hz touch sampling rate so remain competitive. Powering the device is a Qualcomm Snapdragon 778 5G chip with a Turbo X GPU, again for high performance and lag-less mobile play.

It comes with a 4,300mAh battery with support for 66W Honor SuperCharge technology for fast wired charging. You can go from zero to 70 percent in just 20 minutes, claims Honor.

The phone runs on Android 11 but with Magic UI 4.2 on top for its own unique Android flavor.

The Honor 50 Lite shares much of the same features. Some key differences are its 6.67-inch FullView display and the 64MP main camera.

The Honor 50 comes in Frost Crystal, Emerald Green, or Midnight Black. There’s also the special HONOR Code edition. Honor describes it as “an innovative colorway incorporating the “HONOR” logo across the back cover.” 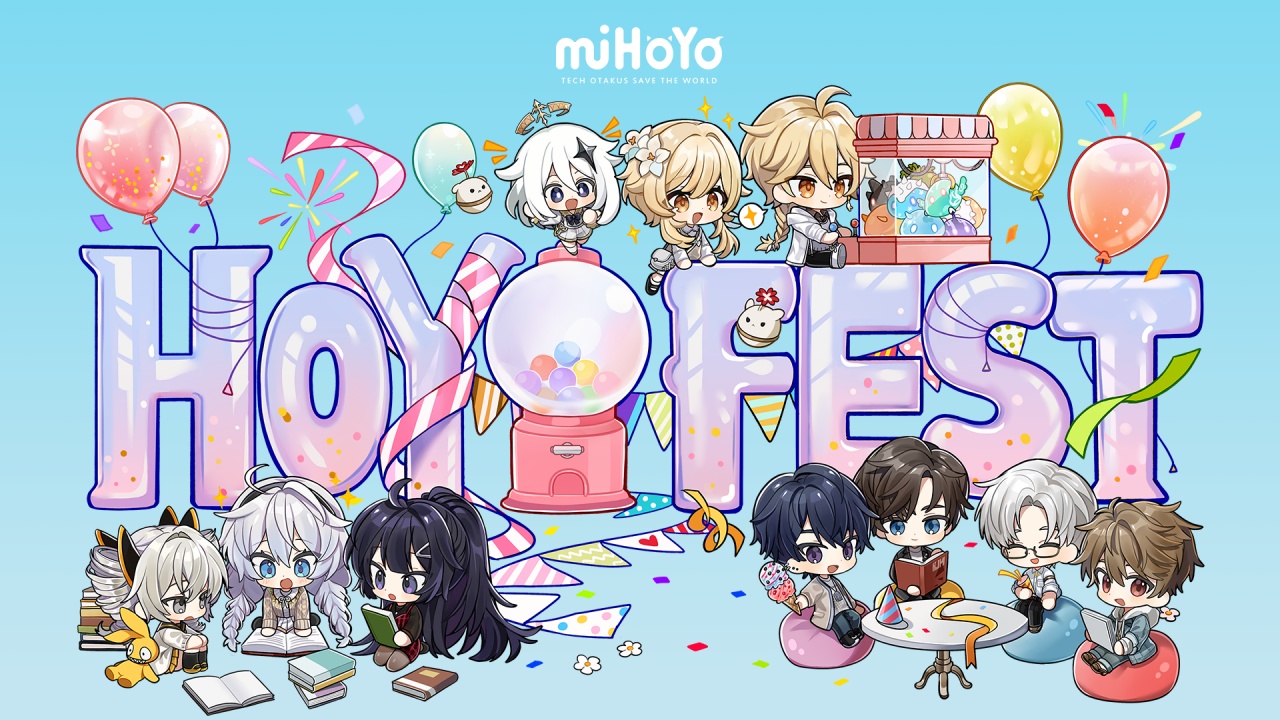 miHoYo, the global interactive entertainment developer and publisher behind hit multiplayer games such as Honkai Impact 3rd, Tears of Themis, and Genshin Impact, announced that HoYo FEST is coming to Southeast Asia this November.

The interactive festival shall be held in six countries: Singapore, Philippines, Thailand, Indonesia, Malaysia, and Vietnam.

The annual celebration will allow for fellow players to finally convene and meet each other off their screens and in real life, allowing for an opportunity to relive memorable, happy, and touching moments in the game together.

All HoYo FEST-related events will be held at collaboration cafés themed after Honkai Impact 3rd, Tears of Themis, and Genshin Impact between November 5 and December 14.

The interiors will be furnished in the styles of Honkai Impact 3rd, Tears of Themis, and Genshin Impact in order, which is accompanied by photography zones.

That way, fans and players will be able to enjoy exquisite foods and immerse themselves in a real-life feel of the game worlds while bonding with new friends they’ve only previously met in-game.

Ordering collaboration combos or spending a certain amount of money at a café also entitles guests to an exciting mystery gift box.

The pop-up stores found only at specific cafés will also sell a variety of exclusive Honkai Impact 3rd, Tears of Themis, and Genshin Impact merchandise, to be distributed only by the staff of the collaboration cafés.

Preparations for the celebration are underway, so Captains, Travelers, and Attorneys should brace themselves for upcoming surprises.