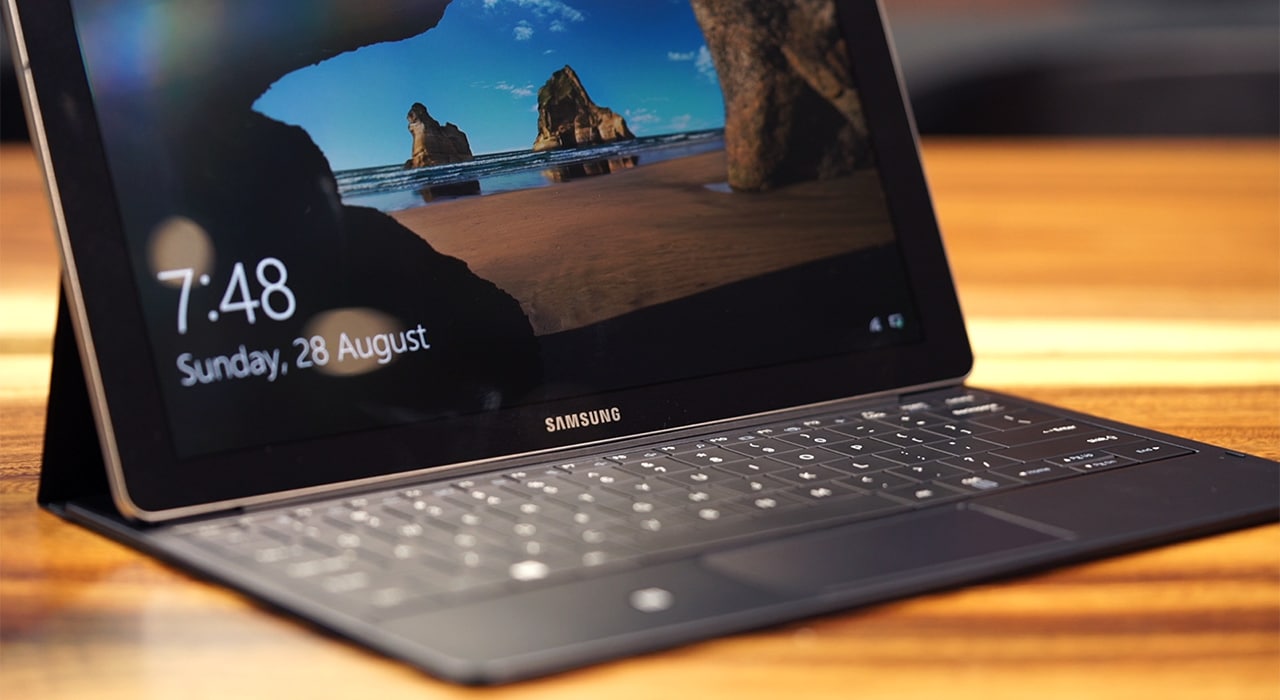 Whenever we hear the words Samsung and Galaxy put together, Android tablets and smartphones instantly come to mind. That’s why it’s so strange to see the Galaxy label plastered on a Windows tablet when talking about the Galaxy TabPro S. And yet, it’s only when you begin using this convertible that you realize how similar it behaves to an Android tablet.

This revelation pops up despite this Samsung convertible directly challenging the likes of the Microsoft Surface series and Apple iPad Pro. On one hand, it doesn’t have the relentless performance Surface tablets have been delivering for four generations; on the other end, it has a much more desktop-like operating system as compared to the iPad Pro’s. The balance between both sides is what puts the TabPro S in a unique position to appeal to a desktop-hungry, yet mobility-loving audience. 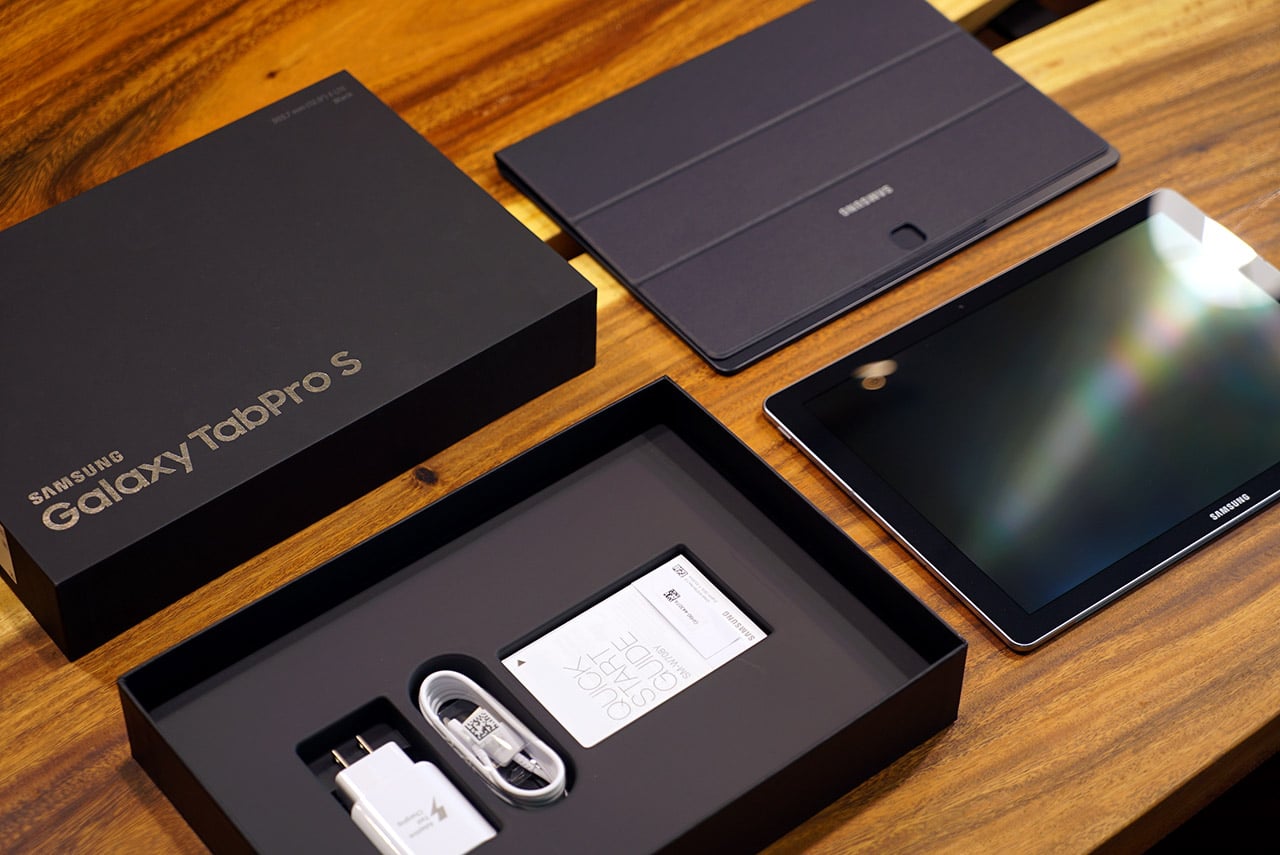 Windows in an Android body

Throughout our experience with the Galaxy TabPro S, we couldn’t help but feel like we’ve been using an Android tablet on steroids. This isn’t to say it’s a bad thing; on the contrary, having a fan-less, lightweight Windows 10 device is such a pleasure when all you want do is type and watch stuff while doing errands. Naturally, you’re going to have to deal with a flat keyboard and limited travel, but the keys are easy to get used to thanks to the spacious tiles.

Checking out the product page of Samsung, you can tell how much focus is placed on the tablet aspect of the TabPro S, without much mention of how it’s actually a full-fledged Windows tablet with a complete keyboard attachment. Even the setup out of the box looks like it came straight out of an Android product: an Adaptive Fast Charger along with a meter-long cable for the single USB Type-C port, plus a slot for inserting an LTE SIM card. This is as mobile as it gets for a 12-inch Windows tablet. 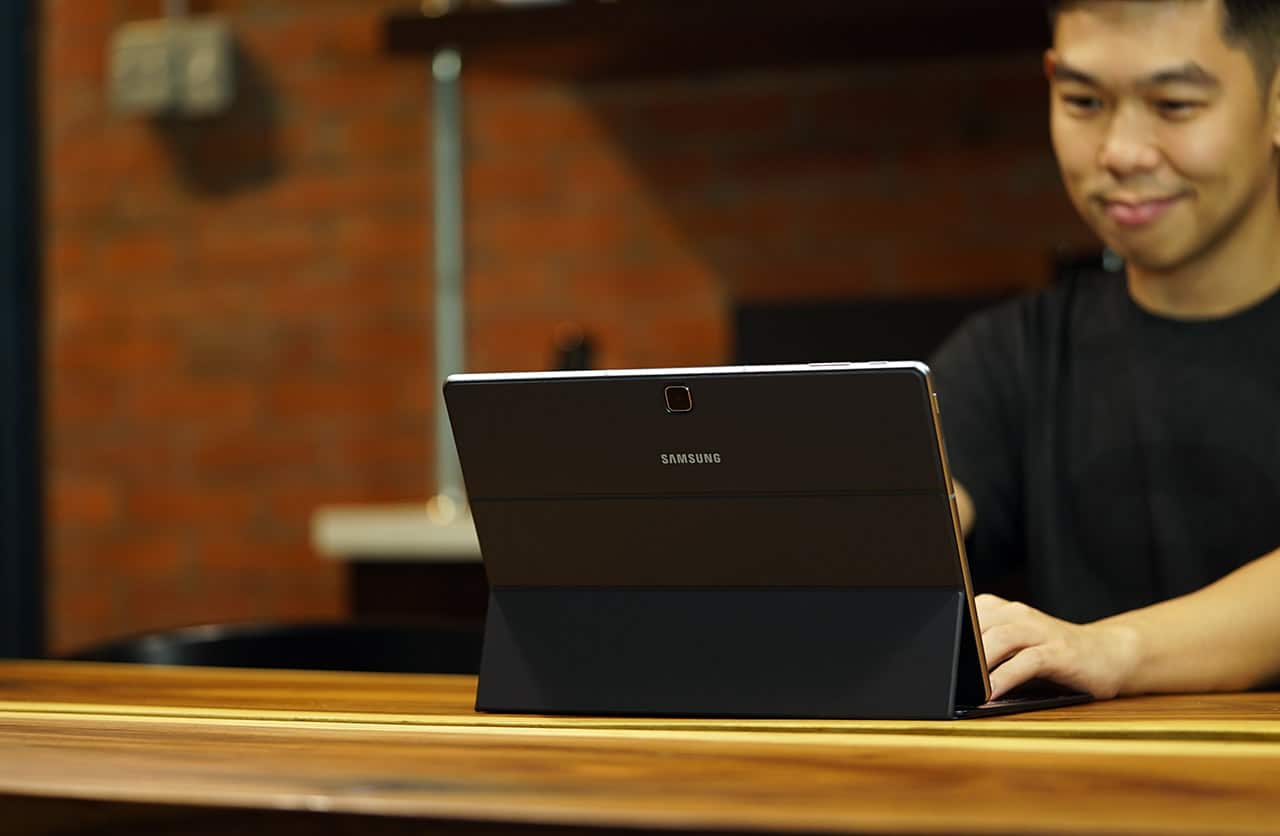 Just enough juice in the tank

Like all of Samsung’s flagship tablets and smartphones, this convertible’s AMOLED display is absolutely captivating. Not once did we think the 2160 x 1400 resolution wasn’t enough. There were times we wished the colors were more accurate, especially while photo editing, but the highly saturated colors are alluring most of the time. We also have to give a positive nod to the stereo speakers found on the sides of the Galaxy TabPro S. They’re surprisingly loud – way better than smaller Galaxy Tabs.

For the tech-savvy, you’ll notice a no-frills setup here. You get an Intel Core m3 processor with 4GB of RAM and 128GB of internal storage. Putting it simply, there’s ample power on board to run through several tabs on Chrome, high-resolution editing on Photoshop, and watching (not editing, mind you) videos on the side, all at the same time. At this price point, you’d hope for something more, as this is the bare minimum to run Windows 10 smoothly on a high-resolution screen, but the upside is there’s no noisy fan to bother you.

Here’s another juicy tidbit: The TabPro S is a total darling when it comes to battery life. This should go down as one of the rare cases wherein working on 10 percent of remaining charge isn’t stressful. It seems like there’s always enough to get through a full day’s worth of work without looking for a wall socket. Again, we have to credit the energy-efficient Core m3 processor for this.

Some things are missing

One of the first things you’d expect in the box is a stylus. To our disgruntlement, it isn’t a standard feature of the Galaxy TabPro S; you’ll have to make do with touch gestures and the fiddly track pad. And despite the simplicity of the keyboard attachment mechanism, there’s a limit of two positions for the rear stand, and they’re only usable while the keyboard is latched on. For something that’s advertised as being able to work on its own, the tablet is heavily reliant on the keyboard to function properly. Without physical keys and a stylus, working through Windows 10 purely on finger touches is a clumsy affair.

While we’re on the subject of pure tablet usage, there’s only one digital port to do all your work. You have a single USB Type-C for charging, plugging in a flash drive, or connecting a compatible peripheral, such as a mouse or card reader. It seems like this is the path several manufacturers are choosing to take, and we’re practically forced to adjust to the new restrictive standard. On the bright side – and this is also similar to Android devices – the TabPro S comes with Adaptive Fast Charging, letting you go from zero to 100 percent in less than three hours, so there’s more time for you to plug in other devices.

Any Samsung fan who’s in need of a seamless transition from Android to Windows should seriously consider the Galaxy TabPro S. The beauty here lies in the sheer convenience of being able to power up a complete Windows 10 machine and attach a keyboard at will – just like an Android device. The official price begins at $899, so it’s right up there with the big boys of mobile computing. 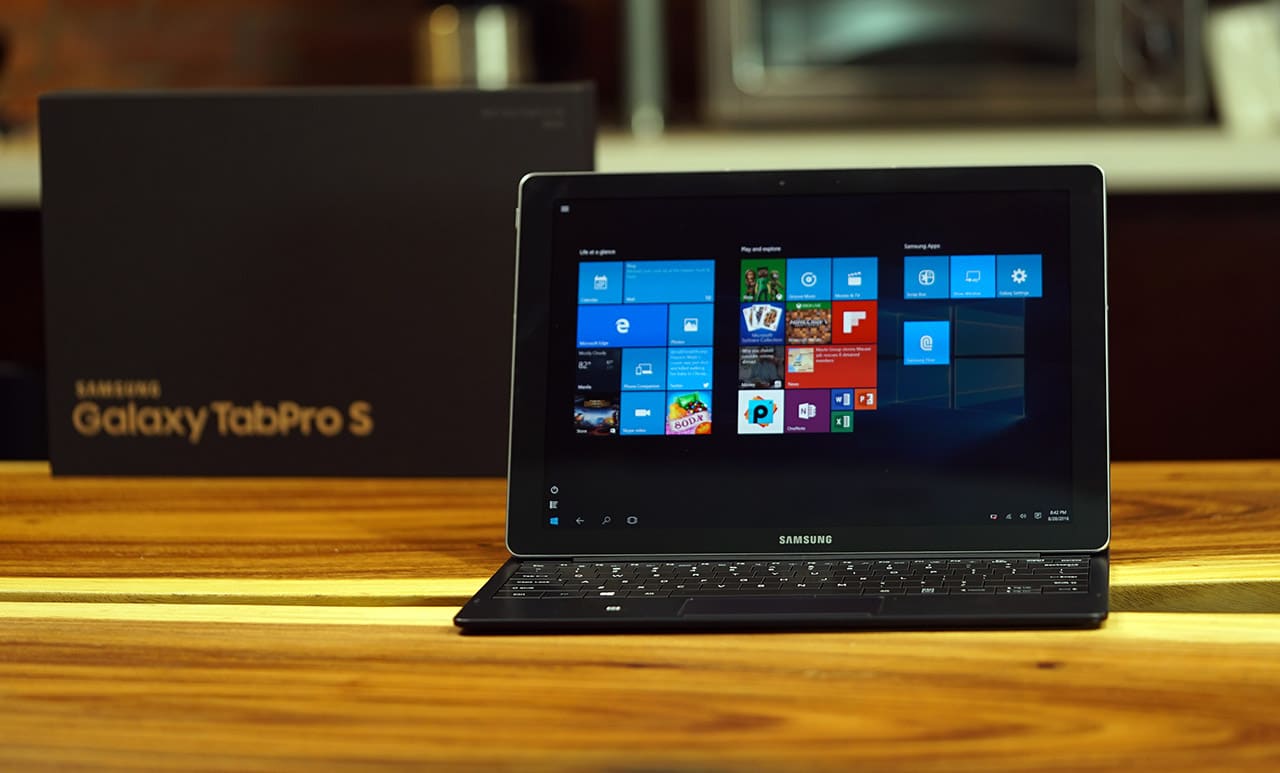 As long as you don’t force the TabPro S to go beyond its specialities, like making it render graphics-intensive games or heavy photo/video editing, you have a GadgetMatch in your arsenal. You also need to keep the keyboard attachment on, because without it, you’re better off buying a Galaxy Tab S2 Android tablet instead with its willingness to work solely on swipes and gestures.

With rumors circulating about a successor in the works, we can’t help but feel hopeful about the future of the Galaxy TabPro S line. We’re wishing for a stylus and more connectivity ports next time around.