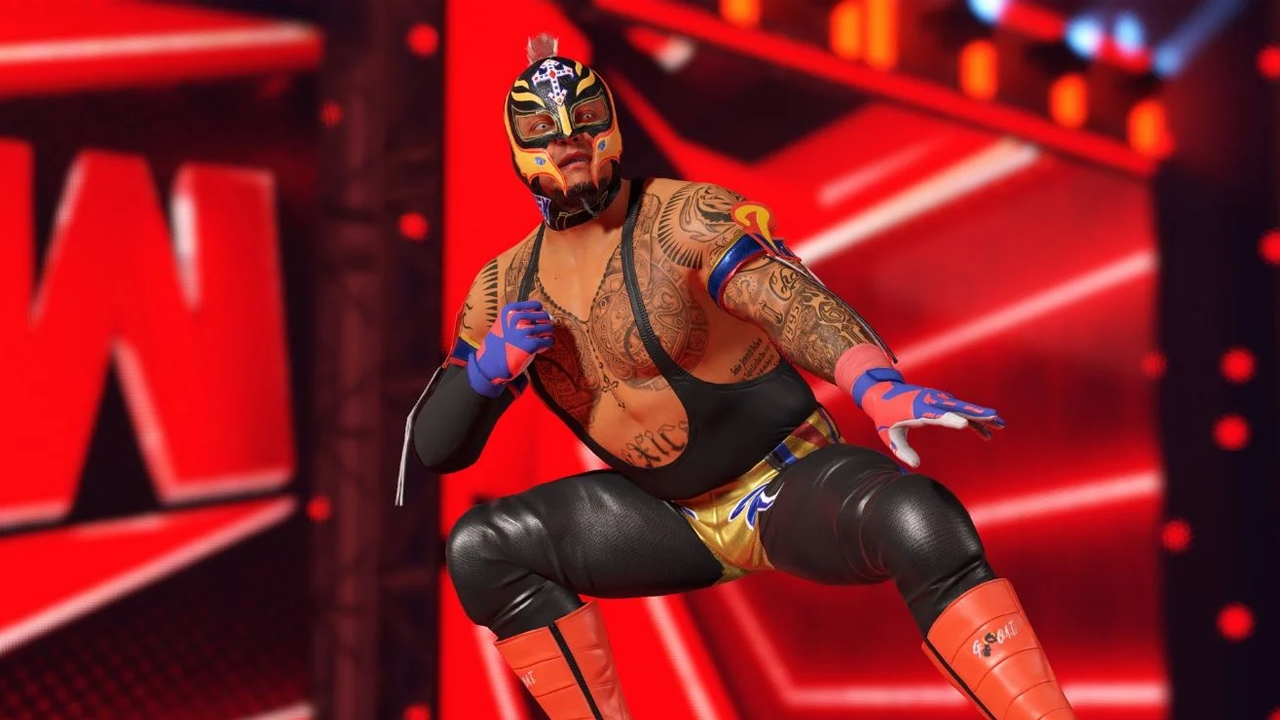 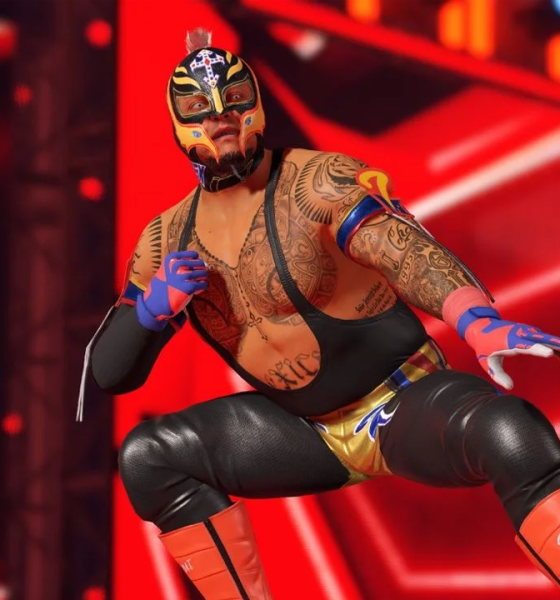 Almost two decades ago, I loved the SmackDown vs. Raw series. At the time, wrestling was an integral part of my identity growing up. Weeknights after school were filled with fantasy matches. Plus, when the PSP versions came out, I lived the series even while outside.

For several years, the franchise was an exciting way to live out dream battles, string together powerful moves, and pretend to be a wrestler. It had a lot going for it. Of course, time went by quickly. Though still a part of my life, wrestling took a back seat. I’ve also moved on to other gaming genres and franchises. And besides, the SmackDown vs. Raw series turned into the WWE 2K series, switching from one developer to another.

Fast forward to this year, both the wrestling world and the videogame franchise breathed a compelling argument to draw me back into the fandom. Both signaled a return to what made that world so appealing in the first place. With the game finally launching after an announced postponement, did WWE 2K22 fulfill just that? 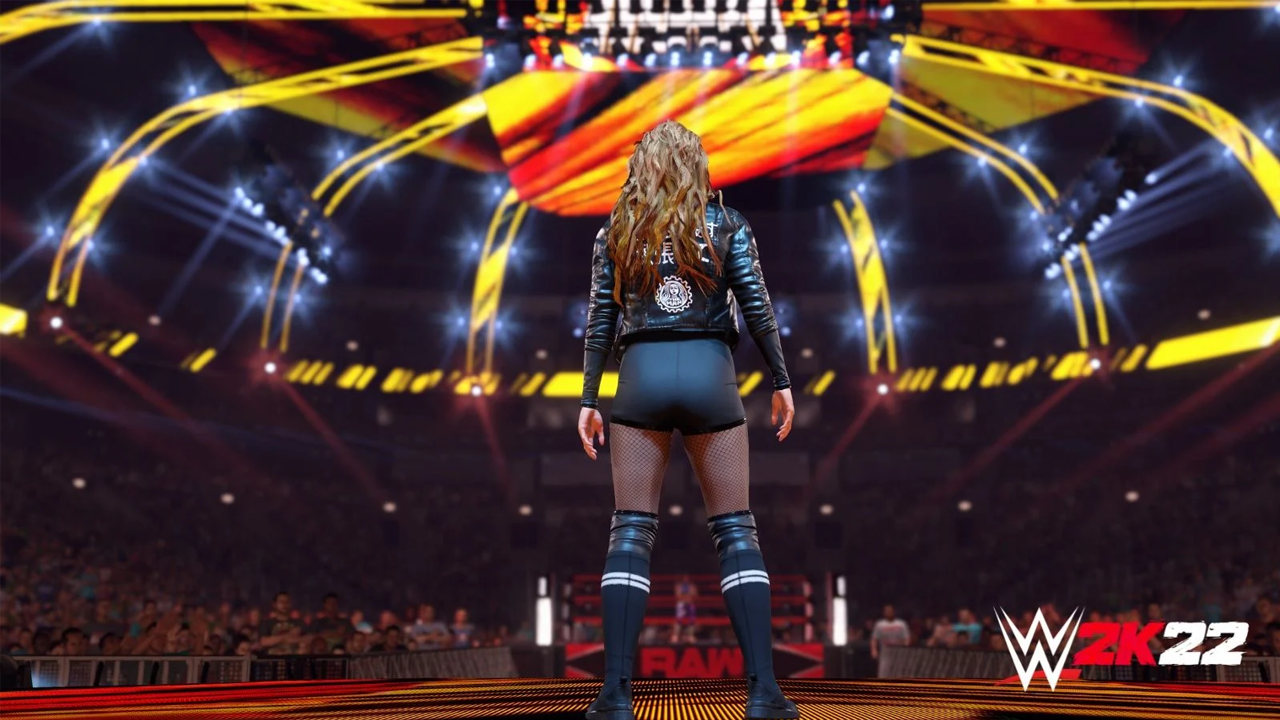 A return to form

Though I wasn’t into the series as much, I did give the WWE 2K series several goes. However, they never sparkled with the same magic of its predecessors. Like the NBA series, WWE 2K was obsessed with creating more complex fighting systems with every iteration. Though realism is appreciated, the changes reduce the approachability of the series. It’s hard to feel powerful while worrying about what each button will do.

Thankfully, WWE 2K22 ameliorates this problem by introducing a simpler system. Compared to previous games, this year’s entry plays with more similarity to the SmackDown vs. Raw series of yore. Every in-ring event doesn’t turn into a complicated minigame that takes you away from the action. You can easily get by through mashing buttons. However, though mashing can become a strategy, the game still rewards studying moves.

Each wrestler comes with a host of moves and combos that more willing players can learn and master. The system also comes with a fairly simple reversal system: predict what the opponent is doing and press the button corresponding to the attack they did. For example, if the opponent does a heavy attack, press your heavy attack at the right time. Simple, even if it involves a bit of luck.

If all this sounds familiar, that’s because it is. 2K Games turned the series into a pseudo-fighting game, and I’m all in. It’s a good blend between simulation and action.

(Side note: it’s also a point of hilarity that Drew Gulak, a current WWE wrestler, does the tutorial when you first encounter a new mechanic.) 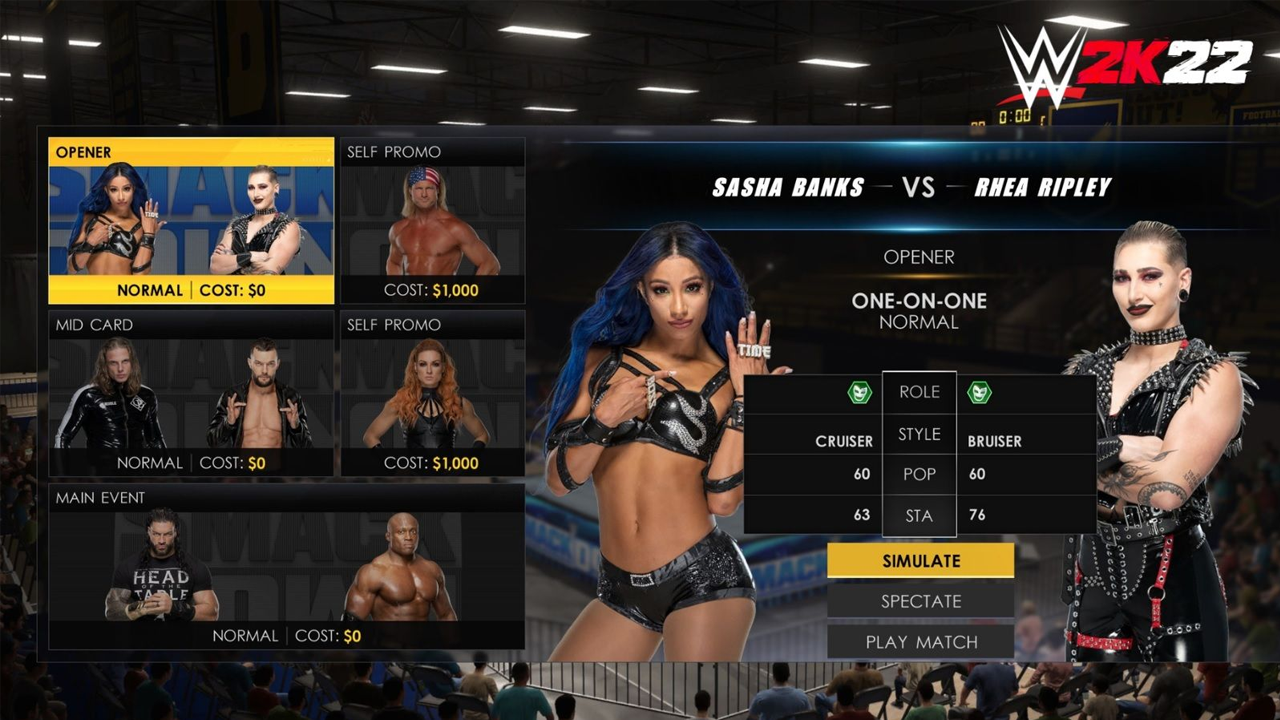 An array of how to play

Besides setting up dream matches, WWE 2K22 offers several modes to mix up gameplay (which are also the same modes you get from previous games). The headline, of course, is a Showcase mode featuring Rey Mysterio. In it, you can relive several of Mysterio’s most notable matches throughout his career. Each match comes with around a dozen objectives (such as “hit your enemy with a front grapple) to follow the flow of the real match. At certain points, the match transitions into WWE footage interspersed with kayfabe commentary with Mysterio. While cinematic, it’s also an advanced tutorial to learn some of the more advanced techniques of the game.

For those disinclined to play as Mysterio, the game also has a Universe mode, letting users play as any wrestler of their choosing and take them through potential matches and rivalries during a season of their chosen WWE show.

For the more management-focused player, MyGM makes a comeback. Players can book a show and compete against the GM (or general manager) of other shows in a race for ratings supremacy. The mode has been part of the series since the early days, so long-time fans will likely rejoice or, at least, find familiarity with the mode. 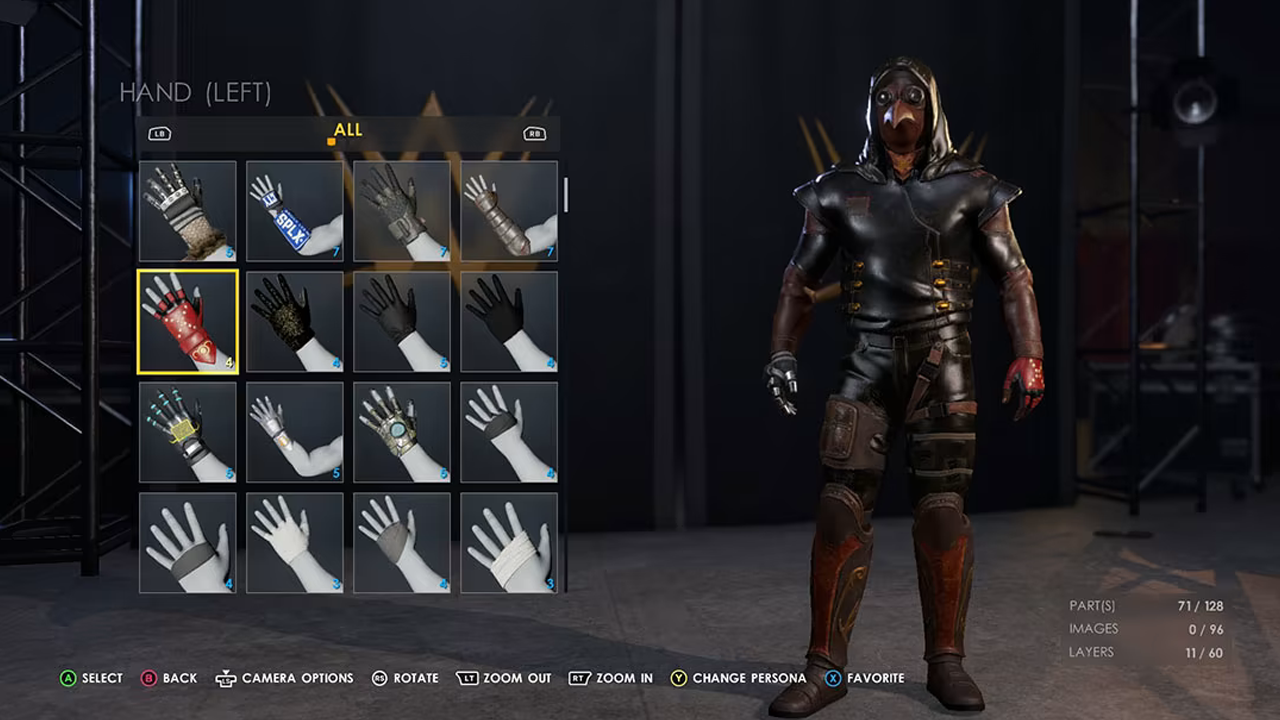 Another familiar sight for fans is MyRise, otherwise known as MyCareer. As always, players create their own custom wrestler and take them through the career of a WWE superstar. Potential stars start off in the WWE Performance Center before moving on to the main shows: Raw, SmackDown, and NXT. Along the way, you can choose to start rivalries or mini stories through one-on-one encounters or social media interactions. Unfortunately, the latter of the two happens quite a bit. While it’s true that social media is a powerful tool in a wrestler’s repertoire today, in-ring promos and speeches are, too. Some of the magic is lost when matches just spontaneously happen after Twitter beef.

Finally, WWE 2K22 adds a new mode called MyFaction. For NBA 2K fans, this mode is that series’ MyTeam mode. Players get a basic starting deck of wrestlers, managers, power-ups, and contract extensions. They can also bolster the set with booster packs that can be purchased using real money. Otherwise, players can also fight matches inside the mode to slowly gain currency for packs.

Microtransactions have always been a major sticking point for 2K’s gallery of games. WWE 2K22 is no different. At the very least, MyFaction doesn’t lock away a lot of content behind the microtransaction system. 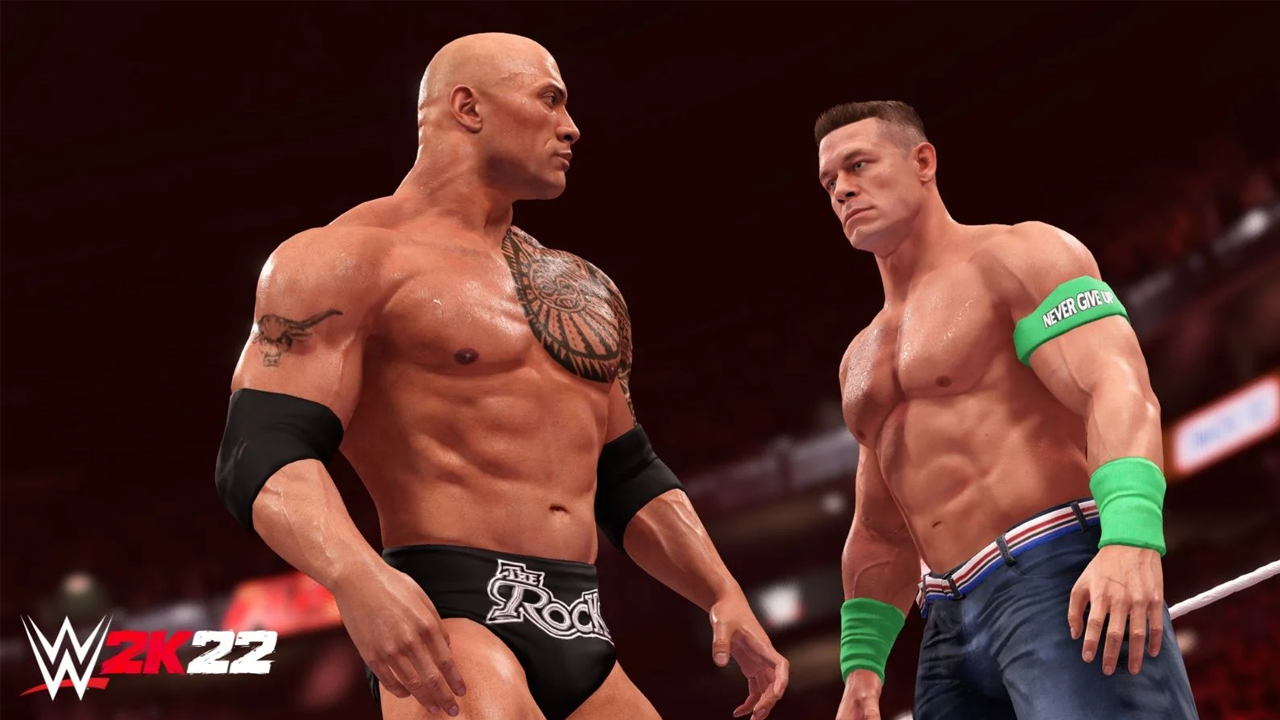 By no fault of its own

Speaking of the game’s roster, WWE 2K22’s biggest issue wasn’t created by anyone from 2K Games. Months before the game’s release, WWE fired several wrestlers. 2K Games was likely putting the finishing touches already, having captured the likenesses of wrestlers in the promotion ages ago. Unsurprisingly, when the game came out, WWE 2K22 already had an outdated roster. Some are already gone, while some found work in WWE’s rival promotion, AEW. It felt like an old game from the get-go.

It’s an unfortunate twist of fate. However, it does have a silver lining. Instead of a SmackDown versus Raw game, a portion of WWE 2K22 turns into a WWE versus AEW game, albeit with WWE-style entrances.

Further, the game comes with a decent amount of customization options for new wrestlers, entrances, movesets, championships, and arenas. At the time of this writing, the community already had a dedicated set of creators working to bring elements from competing companies into the game. I could download creations themed from AEW, Impact, NJPW, and unavailable legends. Coupled with the impressive graphics available to the series, WWE 2K22 has the potential to become the ultimate wrestling game in today’s age. 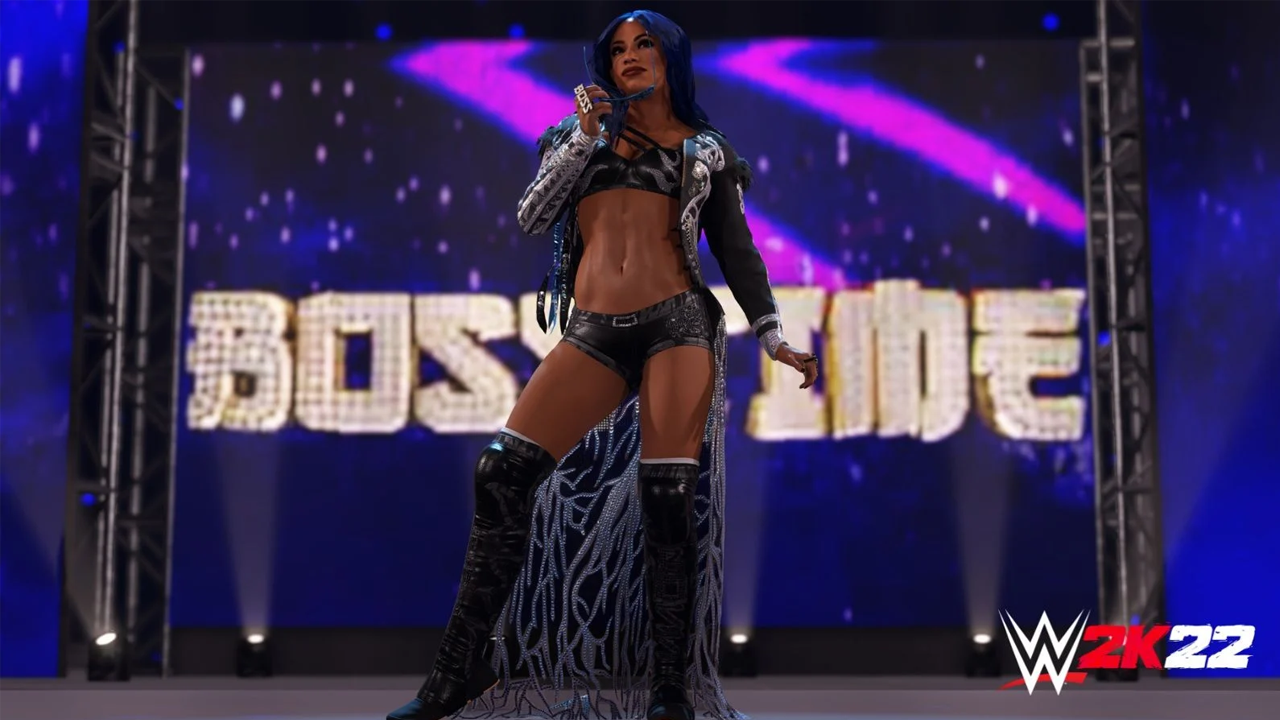 Back to the action

The potential to pit WWE against other companies underscores the game’s biggest strength: the value it places on actual fighting. WWE 2K22 shines brightest when it focuses on wrestling. In retrospect, what keeps bringing me back to the game was the simple fighting system.

Funny enough, it mirrors how I feel about the wrestling world today. Amid controversial backstage decisions, booking, and character developments, it’s still nice to kick back and watch two wrestlers tell a story in the ring. Now, my wrestling diet consists of more than just the WWE. It encompasses AEW, NJPW, Impact, GCW, and all the rest I can consume. Despite an outdated roster, WWE 2K22 fosters a blank slate that can support a fandom hungry for more than just WWE-style wrestling.

Is WWE 2K22 worth a recommend? If you like wrestling regardless of promotion, yes, it is. The game caters to both religious fans of the WWE 2K series and fans waxing nostalgic for a past wrestling game.