When I hear the word Alcatel, I get flashbacks from the very late nineties, when apart from the likes of Nokia and Motorola, it too made cellphones. I can still remember the first Alcatel One Touch, a larger and rounder Nokia 5110 look-a-like.

Almost 20 years later, Alcatel is staging a comeback. Over the last few years the company has generated a reasonable amount of interest in its Flash line – budget smartphones with reasonably good specs.

But despite its rich past, this week, mother company TCL announced it was dropping the Alcatel branding from Flash phones and creating Flash as an independent brand. Albert Wong, general manager of Flash 3C tells GadgetMatch the moves was inspired by Flash’s younger demographic. “We found actually the people who buy online are much younger. They have a different behavior.”

The first new Flash smartphone is the Flash Plus 2, announced this week. At under $200, its probably one of the most interesting phones this year. Sure, it doesn’t offer anything innovative, but the Flash Plus 2 offers features and specs that not even all midrange smartphones offer. 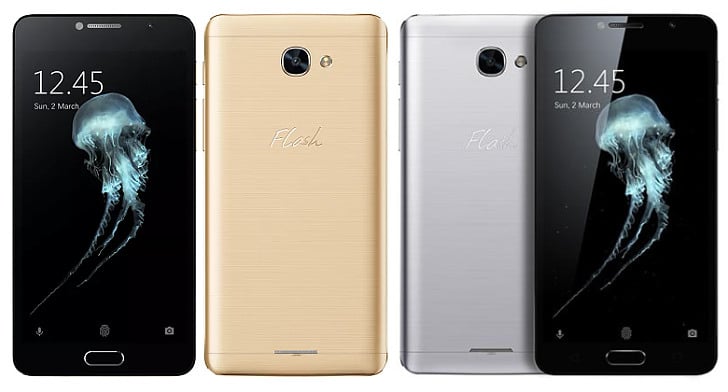 A 5.5-inch, 1080p display fronts the user, while an octa-core Helio P10 chipset from MediaTek takes care of everything else from computing to running Android Marshmallow. The Flash Plus 2 is available with 2GB of RAM and 16GB of expandable storage, or you can get it with 3GB of RAM and 32GB storage. It also The Flash Plus 2 is also equipped with a 3,000mAh battery, a 13-megapixel rear camera, and a 5-megapixel front-facer that offers a Beauty mode for photos and video (yes, video!).

Of course, the design choices that led to the Flash Plus 2 are equally noteworthy. The phone goes metal, with chamfered edges and a curved back that gets a brushed finish for a premium look and feel. As far as sub-$200 phones go, it’s also among the few that has a fingerprint sensor for added security and more.

It’s this disruption that Flash hopes will be the key to its success. We’ve been impressed many times this year by manufacturers offering great midrange smartphones, but with its competitive price point, the Flash Plus 2 is in a league of its own in the segment.

Like many up-and-comers, Flash is focused on building its community of users and offering its phones exclusive via online partners. “The most important thing for us is to satisfy our consumers.”

According to Wong, many new features of the Flash Plus 2 came from understanding user pain points, like the phone’s front-facing flash and its dedicated micro SD card slot. The community will also have a say in color options for its upcoming replaceable metallic casings for the Flash Plus 2.

Available in silver and gold paint jobs, the Flash Plus 2 will debut later this month across Southeast Asia, including Malaysian, Indonesia, Thailand, Vietnam, and the Philippines.

Flash executives tell GadgetMatch they believe APAC is one of the biggest open markets for mobile phones, where they can skip operators and resellers and sell directly to consumers. The company also promises to offer higher-end products later this year.