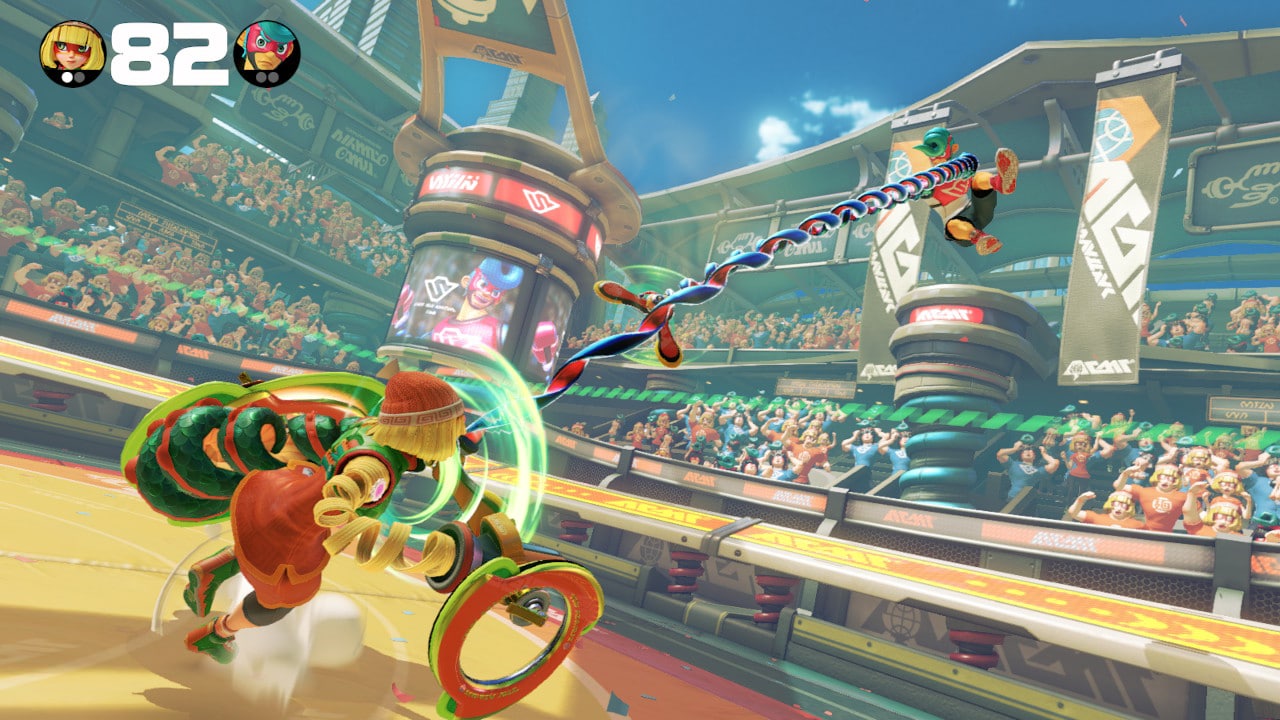 I love fighting games. But I’m terrible at them. For all my desire to play a real-time game of chess, in which I predict and counter my opponent’s every move, I still launch into a Shoryuken when I meant to let loose a Hadoken. I am mechanically bad at the genre, so I have enjoyed fighting games only at the margins. Arms changes all of that. 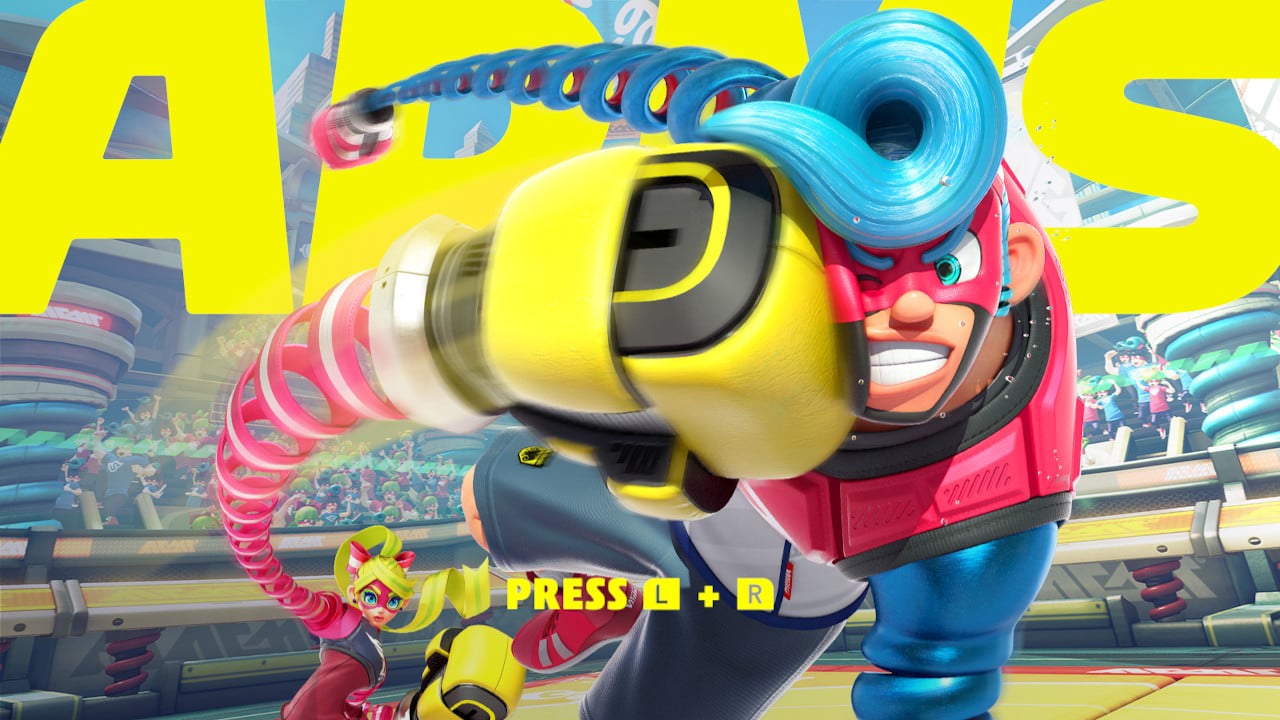 Arms is exhilarating from the get go. The sick vocal samba track (which we recommend listening to as you read our review) amps you up for the bouts to come, punctuated (punch-tuated?) by the title screen that strikes with its graphic design. This is from a Nintendo infused with bold new blood. 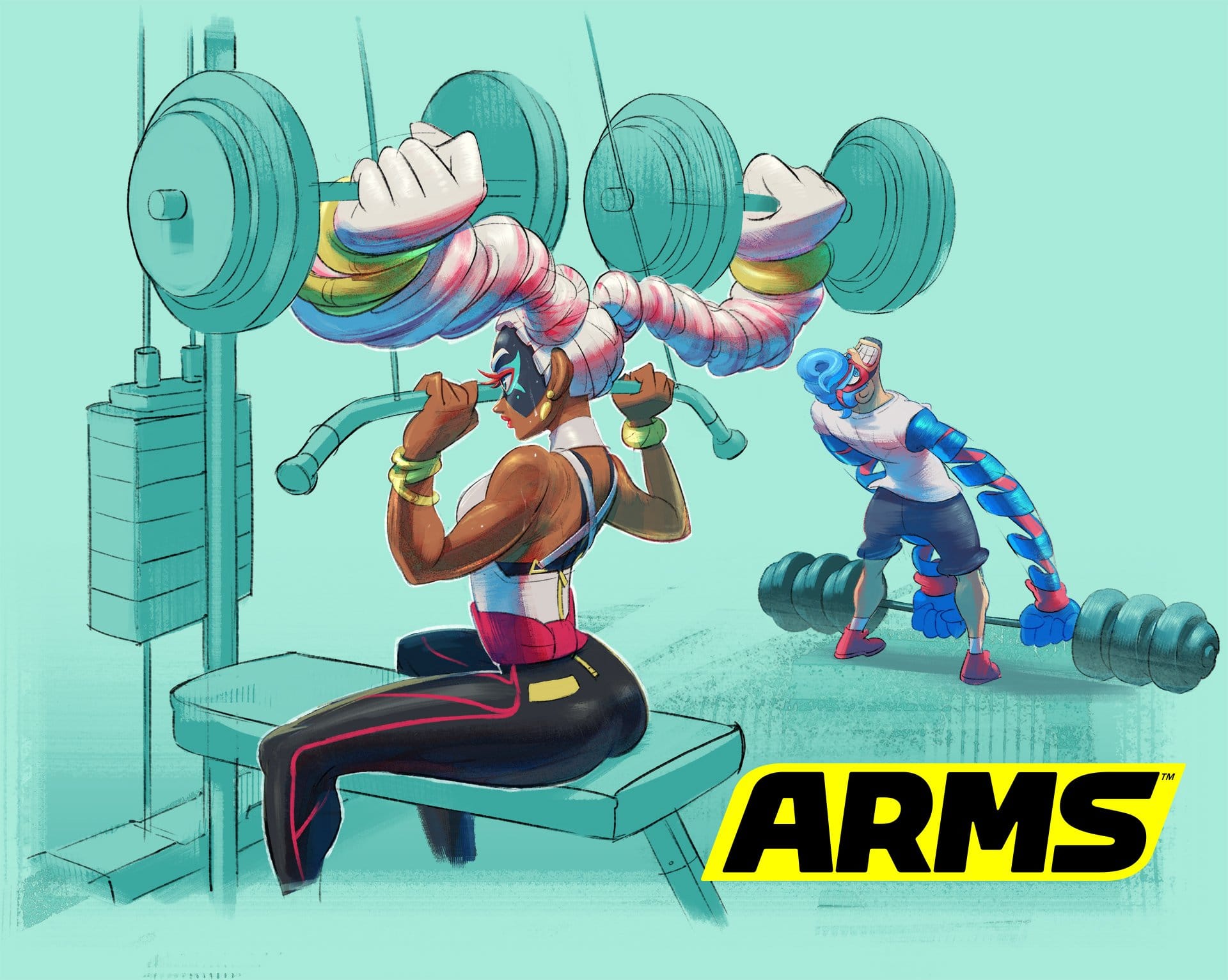 The game pits people who woke up one day with extendable arms and decided to fight with them, to the adoration of fans worldwide. Just go with it. You control your colorful fighter — in my case, a Chinese woman named Min Min who has literal noodles for arms and a ramen bowl beanie — in over-the-shoulder one-on-one battles where you use your extendable arms as projectile fists. It’s boxing with Voltes V’s ultraelectromagnetic tops. 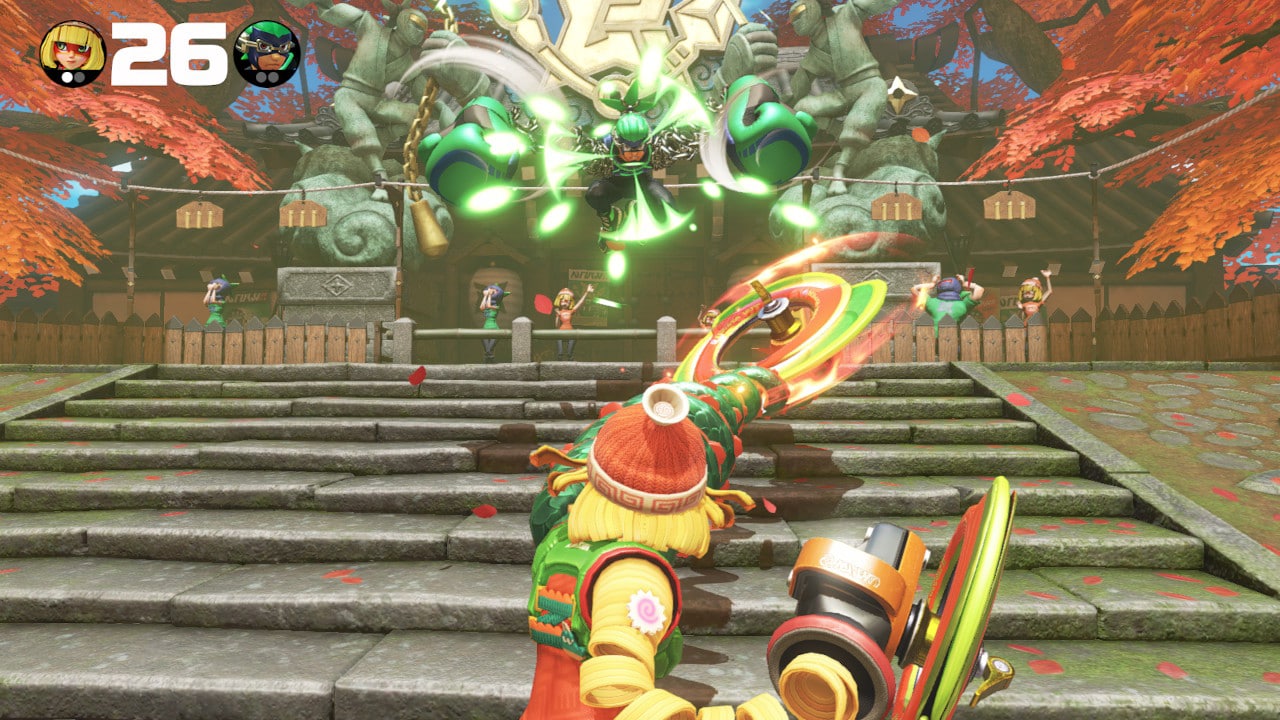 The art direction in Arms speaks for itself. The characters are instantly recognizable. Hero games are all the rage (think Overwatch), and Nintendo enters the ring with this fighter that fuses the dev team behind Mario Kart with the freshness of Splatoon, proving again that they are the masters of creating video game icons. 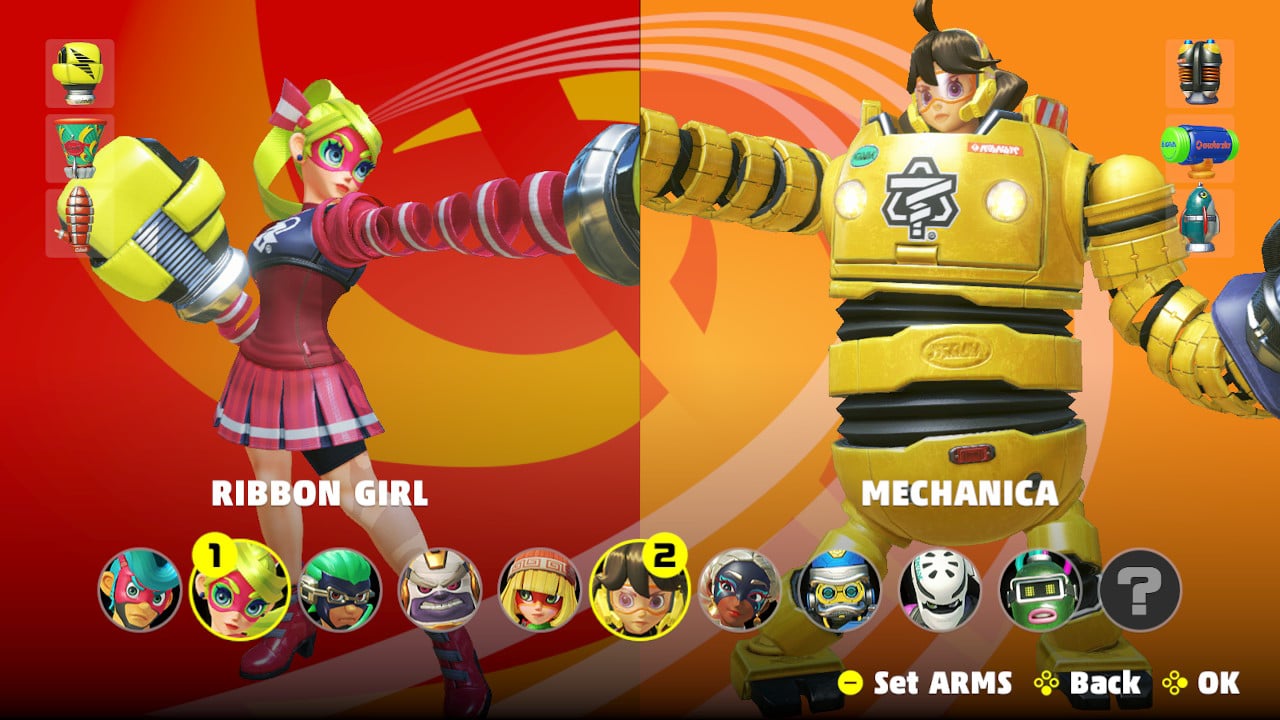 Each of the game’s ten characters are instantly readable — you’ll never confuse Ribbon Girl with Mechanica. All thirty of the game’s titular arms (the weapons at the end of Min Min’s noodles) are also easily identifiable, and tell you if this particular fist is electric or fiery, heavy or light. The springiness of the characters’ arms communicates immediately whether your opponent’s attack will reach you, or whether you have enough time to slip in a counter. This readability is aided by the flawless 60 frames per second and 1080p/720p in docked/handheld mode, with antialiasing to boot. These visual elements combine to help you keep abreast of everything at any point during a match. 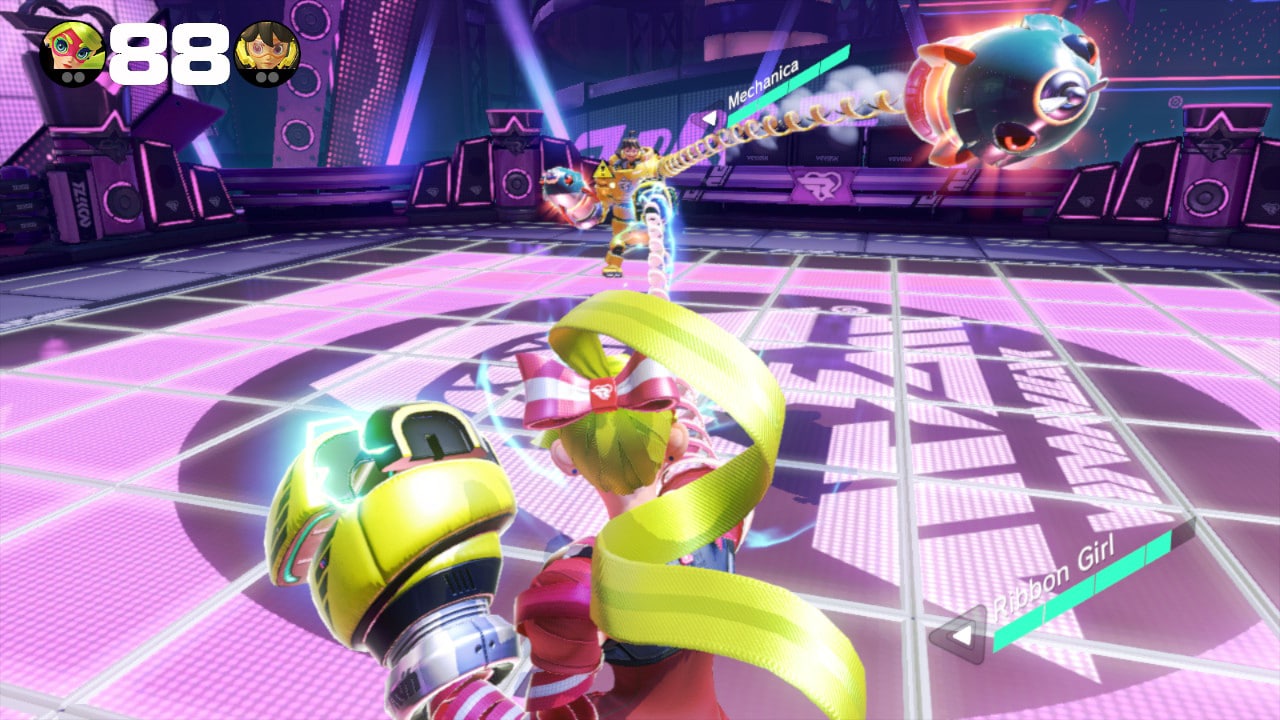 Fighting in Arms feels great. I started off using traditional controls in handheld mode, and fell in love immediately. Nearly all inputs are one button, from dashing, jumping, blocking, and activating your super (here called the Rush). Left or right punches are thrown with the respective triggers. You grab by punching with both arms at once. The left analog controls your movement as well as allows you to curve the punch. That’s it. Its simplicity makes Arms not about complicated button combinations, but about spacing, movement, and timing: the fundamental fighter essentials distilled.

There is one egregious issue in the traditional controls — no button remapping. Block is mapped to clicking in the left stick (my least favorite input), which has led to the double-edged sword of me never blocking. This leads to Muhammad Ali-like weaves through punches, but also renders me vulnerable to Rush attacks that I’m unable to dodge fully. 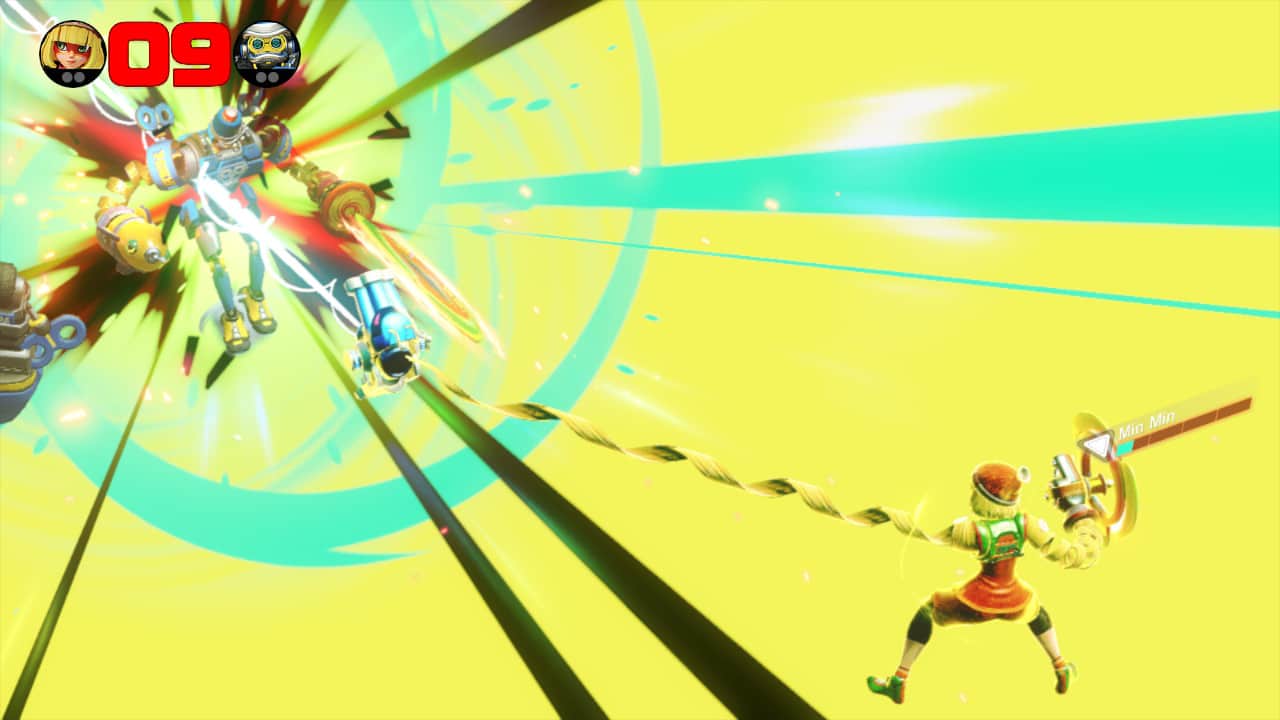 His hands can’t hit what his eyes can’t see

Nintendo polishes a central mechanic to the point that it’s blinding. Grand Prix, the game’s single-player component, does a great job of putting it all together and serving as a tutorial for the brutality of online. 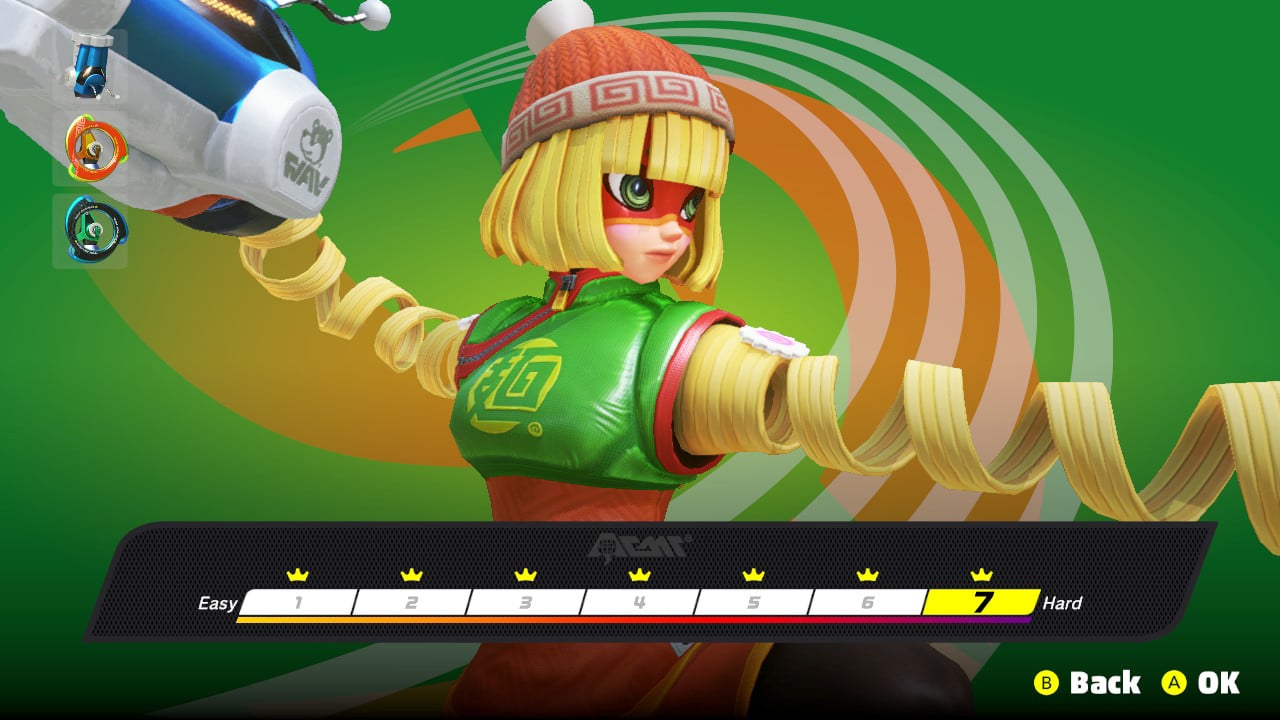 The mode has seven difficulty levels, which represents the most gentle learning curve I’ve ever seen. Ranked is locked behind beating Grand Prix at difficulty level 4, so upon beating the cakewalk level 1, I jumped right into 4… and immediately got annihilated by the CPU. But by taking it one increment at a time, I was trained in the game’s basics. By the time I made it back to level 4, I could stand toe to toe with the AI, and even managed to score a Perfect against the secret final boss. 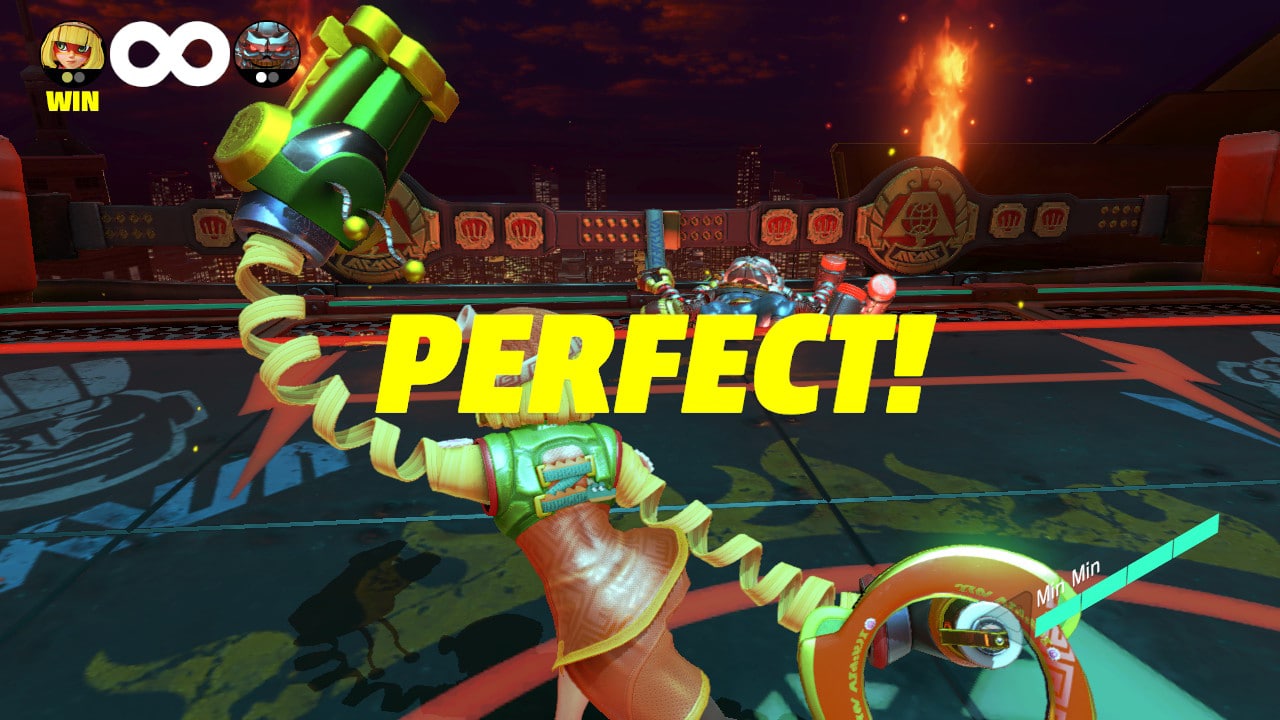 The mechanics are such that every time you lose, it’s your fault, and the game shows you why. You can review a CPU match immediately afterward with the replay functionality. It lets you see things in slow motion from the opponent’s point of view, from an overhead perspective, and from a variety of cinematic angles. Even if you lose, it still feels good, because hopefully you’ll learn from it. 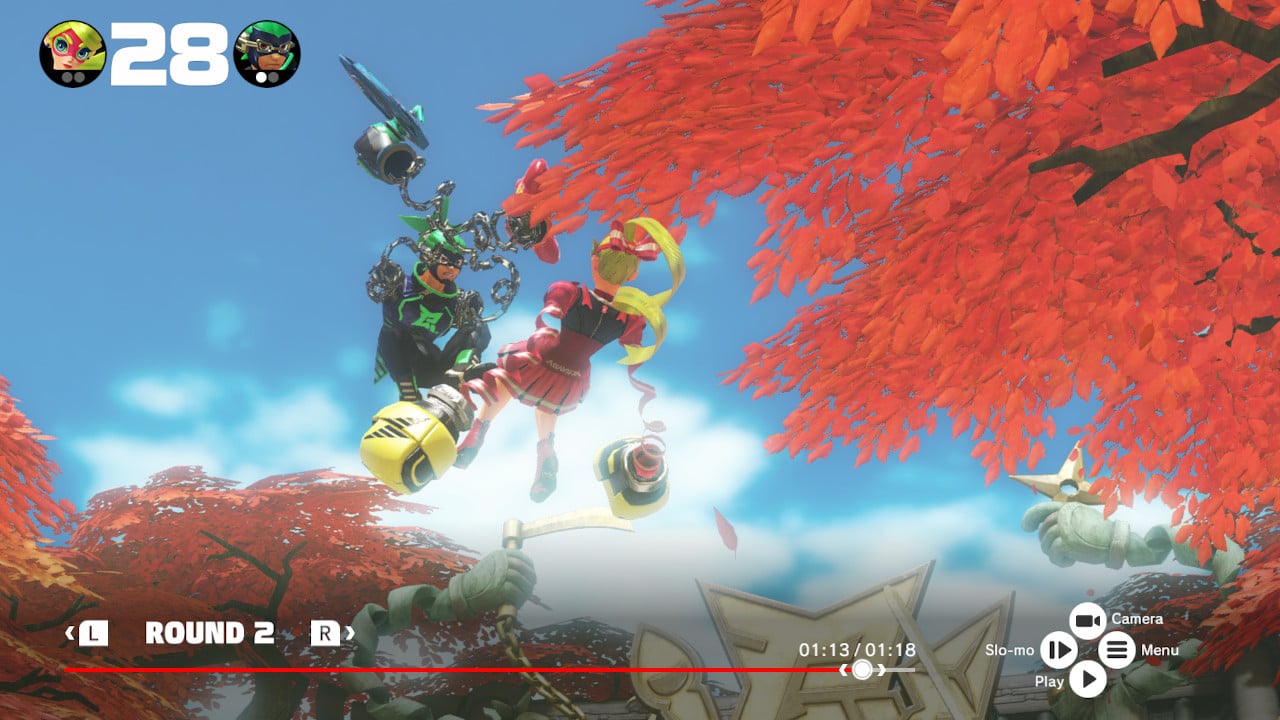 This positive reinforcement is good training for the saltiness of online. The Party Mode is good clean fun, with a volleyball variant (the ball is a bomb that explodes when it hits the ground) and a basketball minigame (your opponent is the ball, and if your grab succeeds, you dunk your opponent or get three points if you’re behind the line). 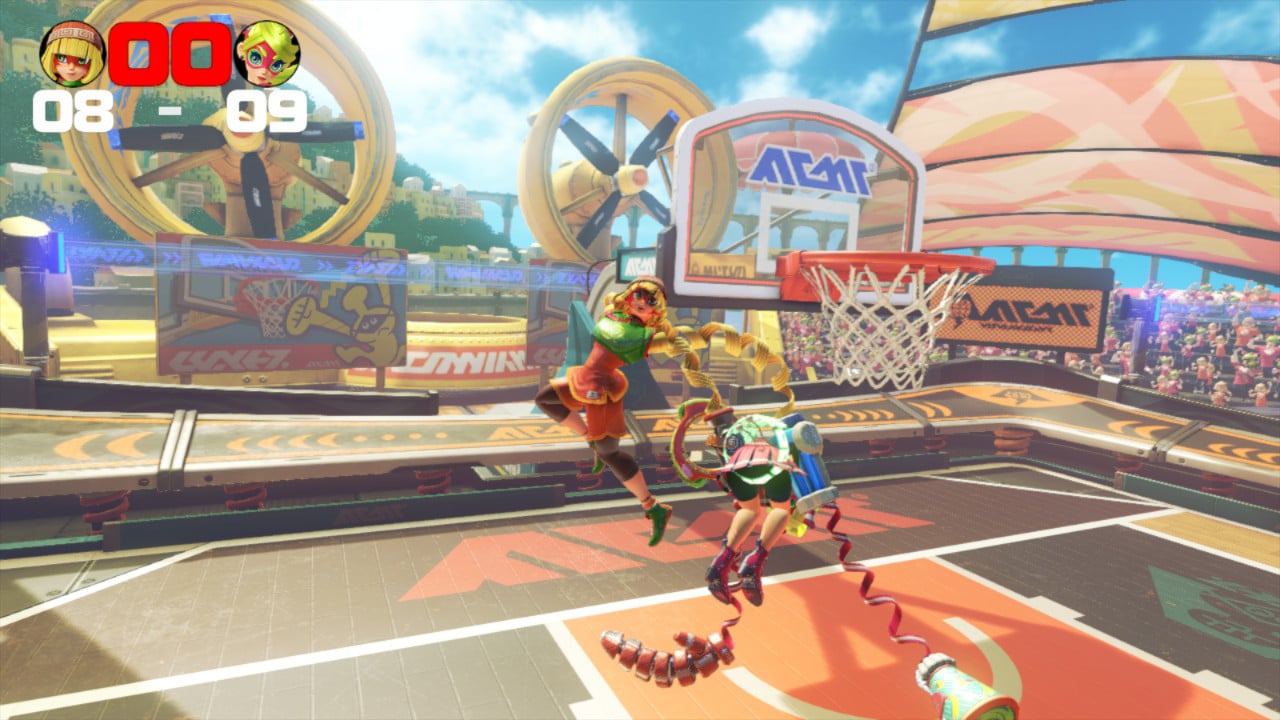 There’s a more serious 1v1 fight mode, but it’s peppered in between the sports modes and the absolutely insane 1v1v1, 2v2, and 3vCPU modes. It’s a great way to practice against real people, and the lobby is refreshingly presented — there will be times when you aren’t matched up, but you can peek into the progress of ongoing fights via the bubbles in the lobby. As of the most recent patch, a proper Spectator Mode has been added, but that’s currently limited to four in a lobby — two fighting, two spectating (normal lobbies have a max of 10 players). 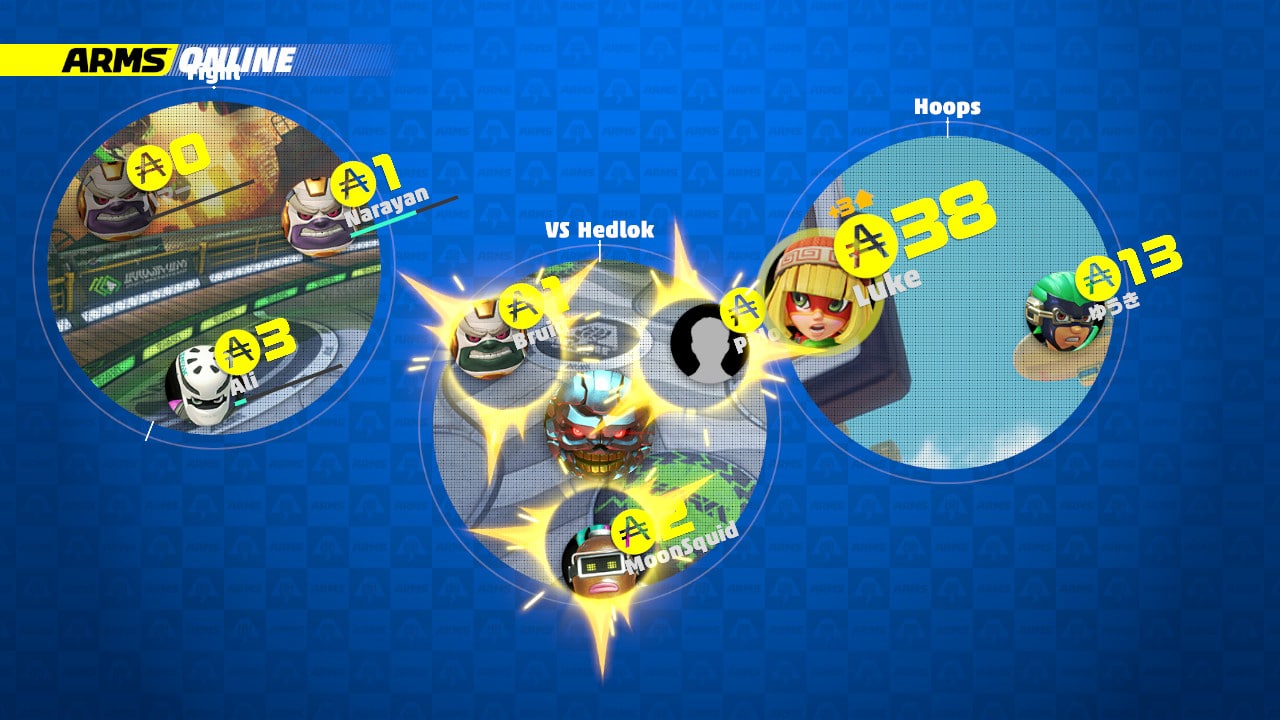 The real meat of Arms is in Ranked. It’s gated behind beating the Grand Prix at level 4, so everyone there should theoretically know how to play. I say “theoretically” because I rocketed from ranks 1 to 7 without losing a single best-of-three game (Ranked peaks at 15 for now). I’ve never been competitive at a fighter before, and there’s nothing like the mind game of prediction, counter-prediction, and reading your opponent. 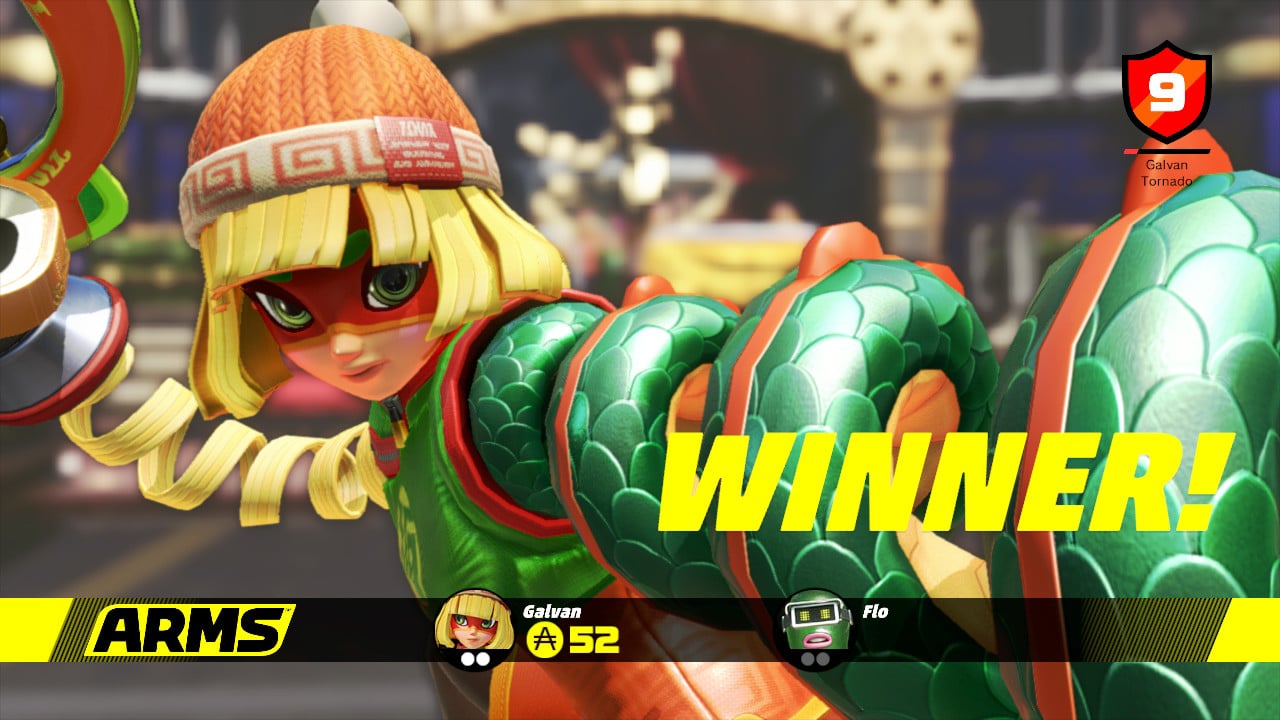 It’s early days yet for Arms, and figuring out the intricacies and depth brought by the different characters and arms (each of the ten characters can use all of the thirty available arms) is exciting. By getting in on the ground floor, we’re building the metagame in real time. It’s a good start for Nintendo’s branching out into games as a service.

“Let’s play,” I tell Belle, my cousin. We’re waiting for our food at Pancake House, and I figure this is the perfect time to live out a Nintendo Switch commercial. For medical reasons, I’d never tried the motion controls before. Belle boxes in real life, so I know she’ll like this. I pop off the neon blue and red joy-cons and hand them to her, and take out another pair. They’re Arms yellow, vibrant as a highlighter.

She looks through the character screen with great interest. “Is she black?” says the palest, most privileged woman in our family who’s learning about social justice at the Ateneo de Manila University. She’s talking about Twintelle. “She uses her hair to punch? I want her.” 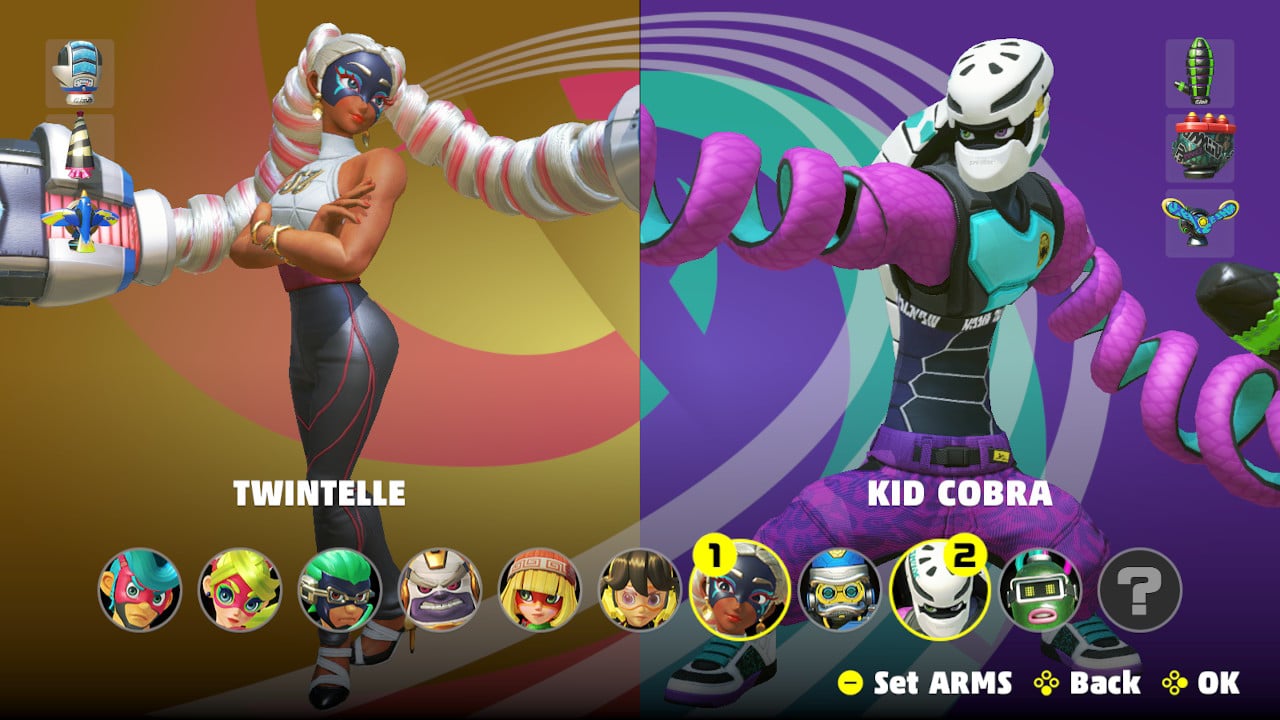 By this point, I’ve had Arms for a week and am deep into Ranked with Min Min. I use a different character for the first time — Kid Cobra, who’s tearing through the tier lists because of his innate advantages in the current metagame that is focused on charged attacks and dashes.

We play three best-of-three matches, and Belle wins every time. Maybe Arms makes savants out of us all. 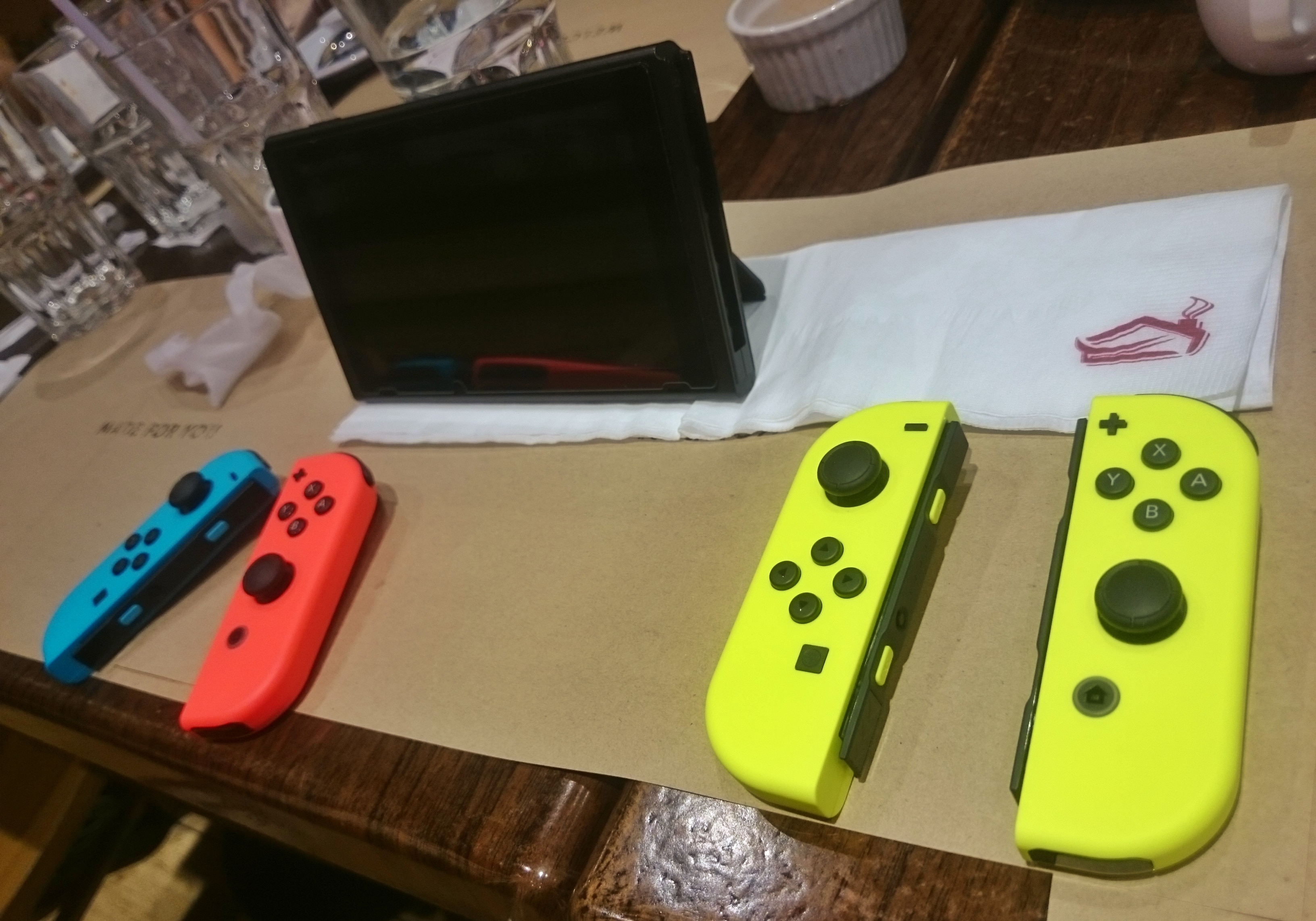