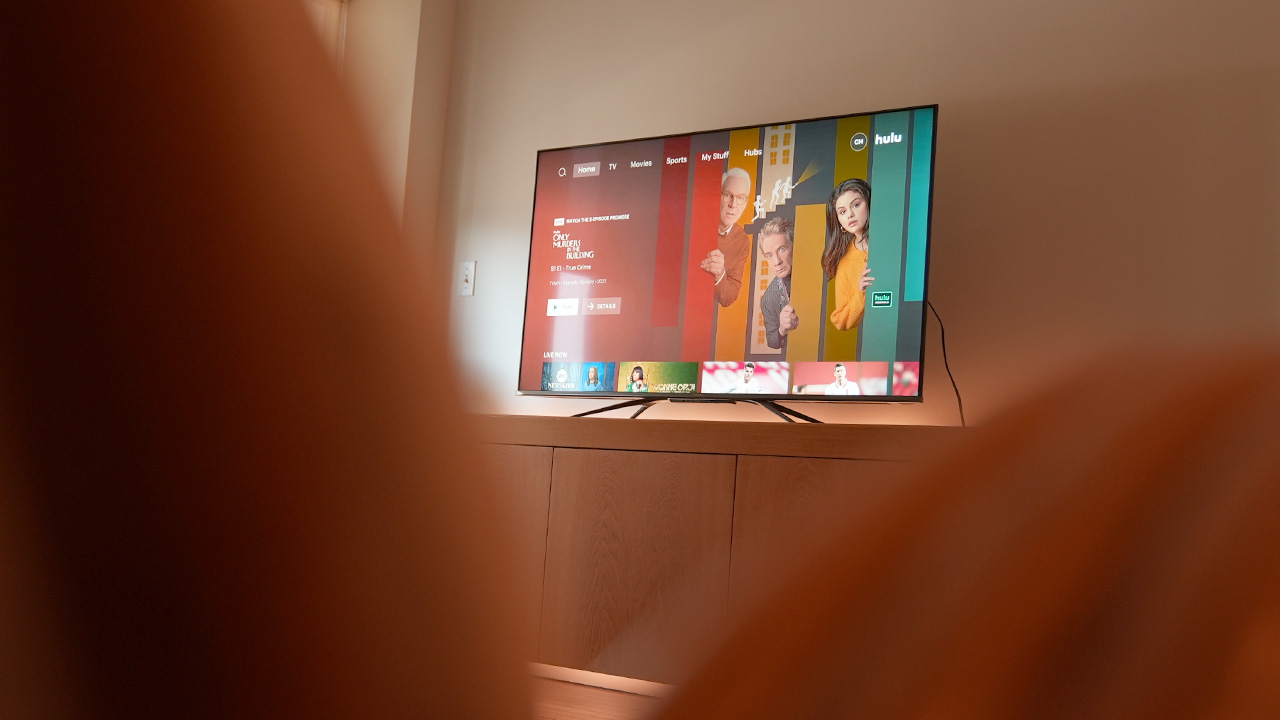 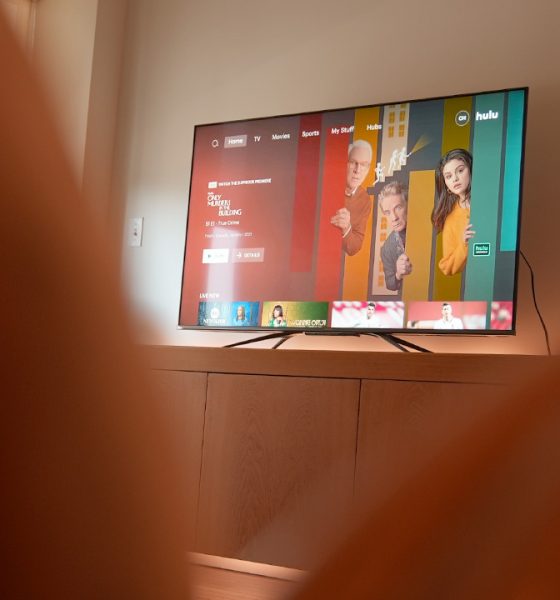 An affordable TV that has it all

For a lot of us, TV shopping is not easy, and is something that needs to be done more deliberately. There are a lot of things to consider and it can get overwhelming.

Given all the choices out there, Hisense’s U8G series stands out because of three things: it’s got a bright display, it runs Android TV, and it doesn’t break the bank.

When it comes to TV displays, there are a few things that are a must with brightness being one of them. The Hisense U8G delivers in this regard because of its excellent peak brightness.

While Netflix and chill is most enjoyable at night after a long work day, I still use my TV from time to time during the day. I watch YouTube videos of recipes when I can’t think of anything to make for lunch, or football highlights that I missed while I was sleeping, or even the news to jumpstart my morning. 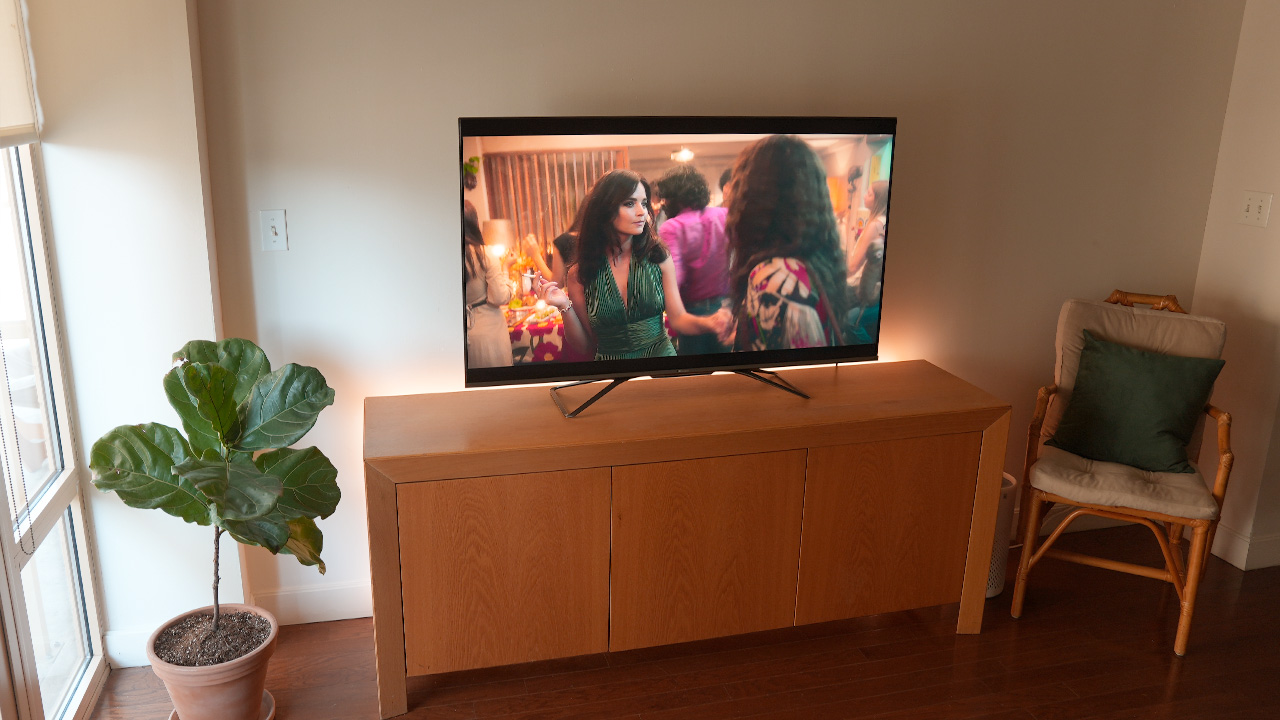 Crime, fashion, and interior design don’t normally belong in the same sentence since crime series tend to be dark and gritty. That wasn’t the case with The Serpent, especially when viewed on the Hisense U8G.

The TV’s improved color gamut made the beautiful midcentury furniture set in the tropics and the stylish outfits of Charles and Marie-Andrée even more visually captivating. 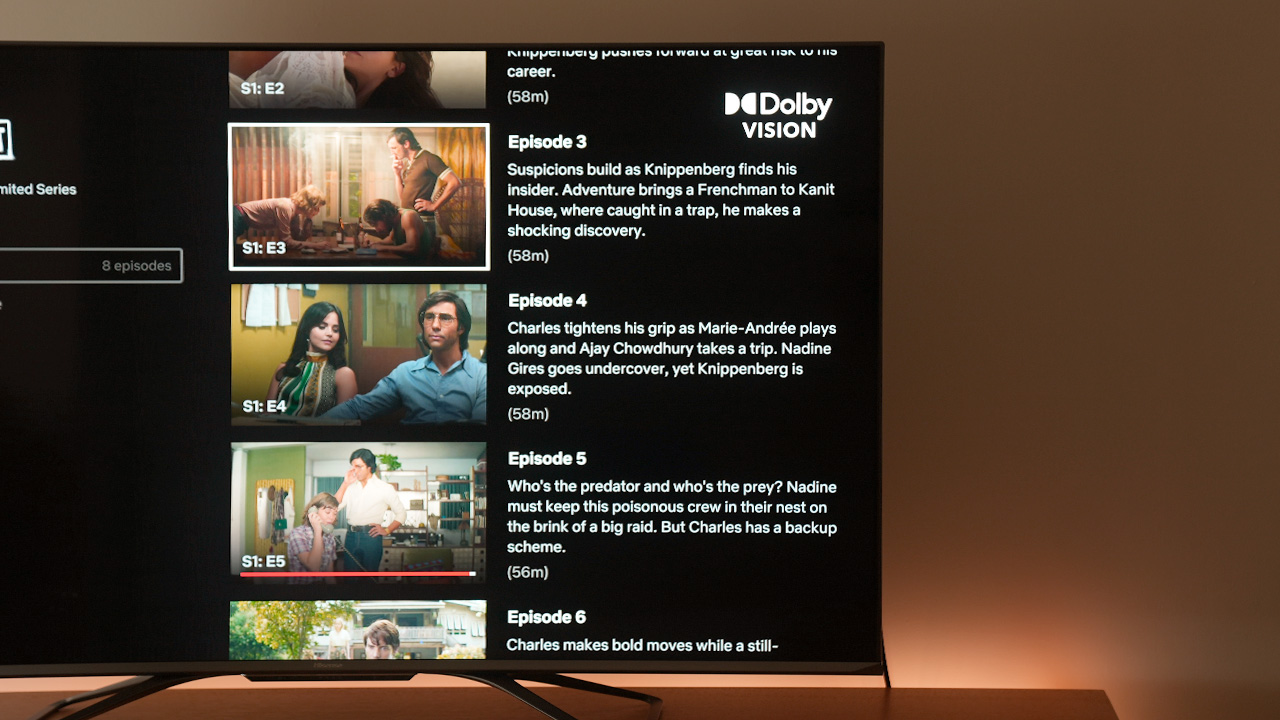 The Hisense U8G also supports HDR10+ and the full suite of Dolby features, so I got to enjoy The Serpent’s production design in its full Dolby Vision glory. 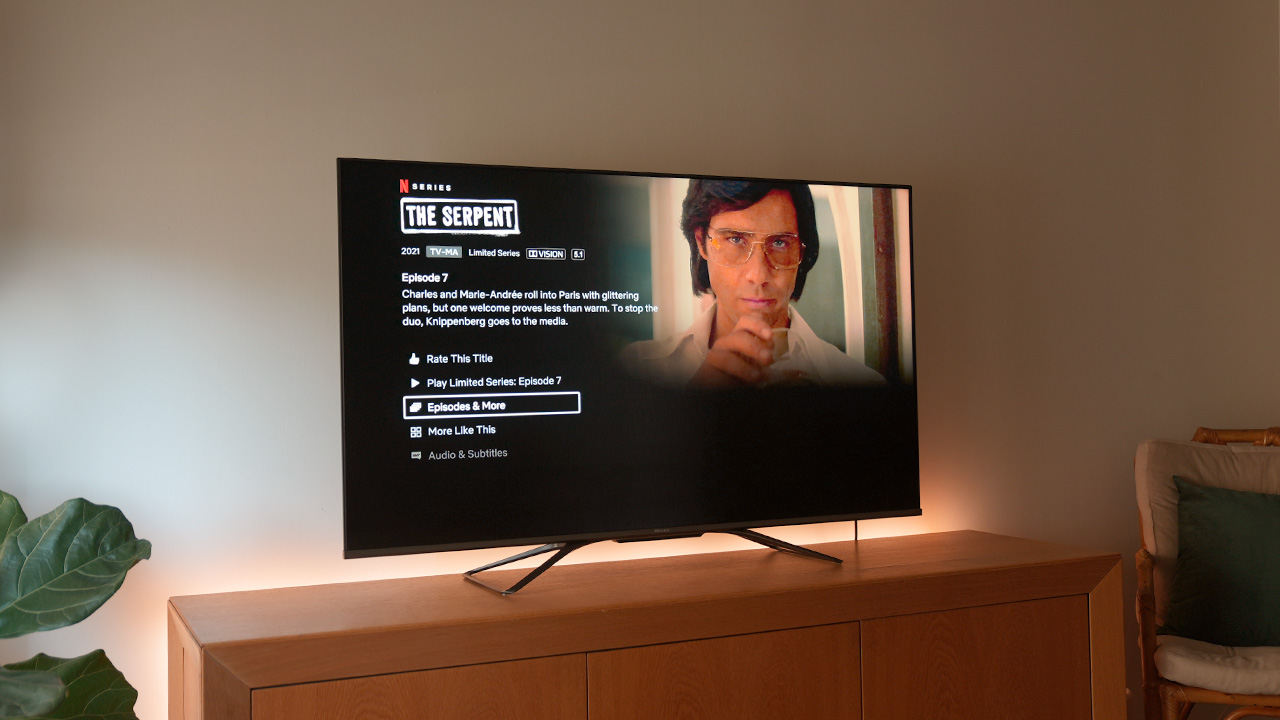 One thing I did not enjoy while binge watching The Serpent was seeing video artifacts whenever the black Netflix loading screen appears. It’s not a deal breaker as it doesn’t ruin the content, but it’s also something you would instantly notice. 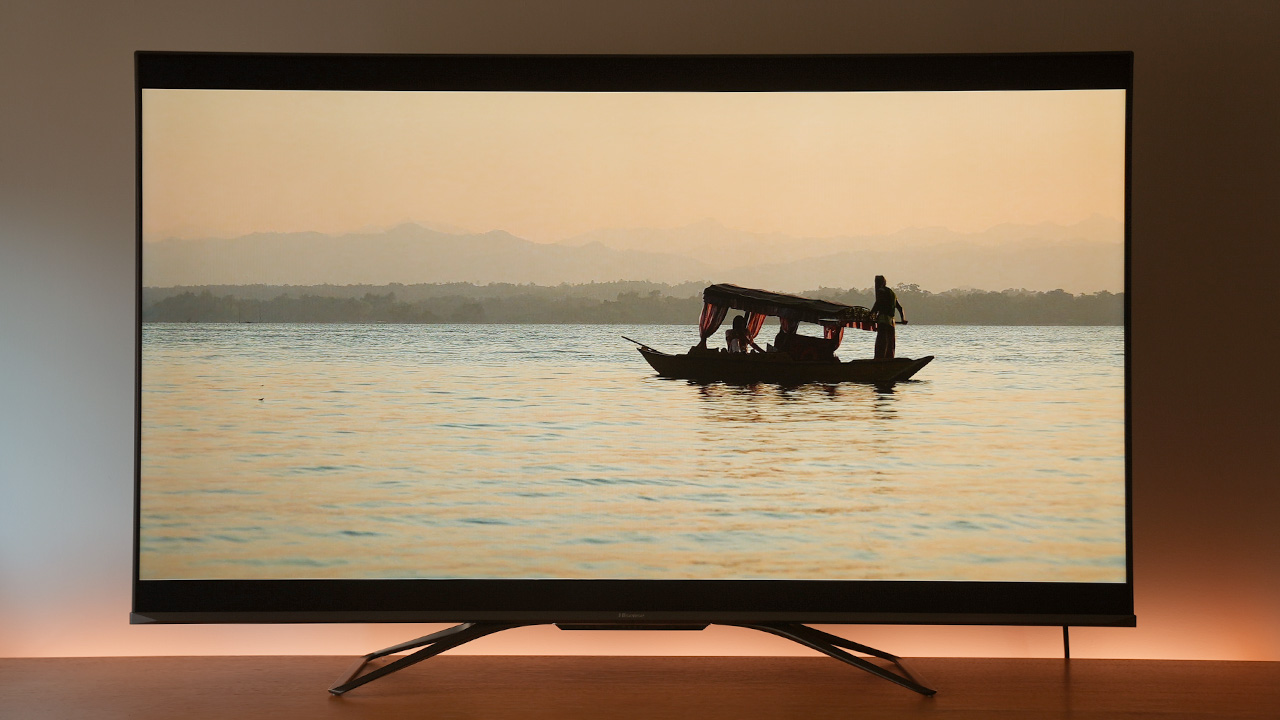 The U8G’s Ultra Motion feature removes the digital noise from moving objects. It also has a 120Hz  native refresh rate, which means a smoother gaming experience. I tend to watch rather slow TV shows and I’m not a gamer, so these weren’t something I was able to really use and appreciate. 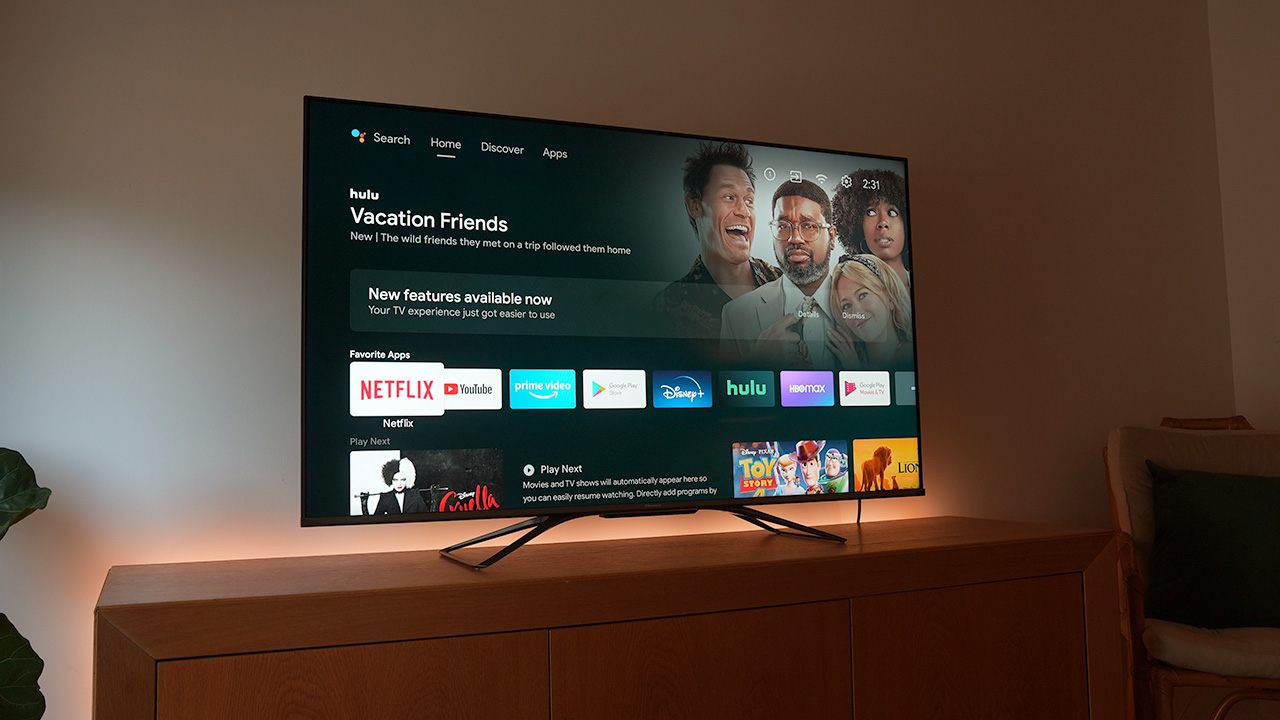 One of the biggest reasons to get a Hisense TV over its competition is its operating system — it runs Android TV. And on the U8G, it feels even more responsive. 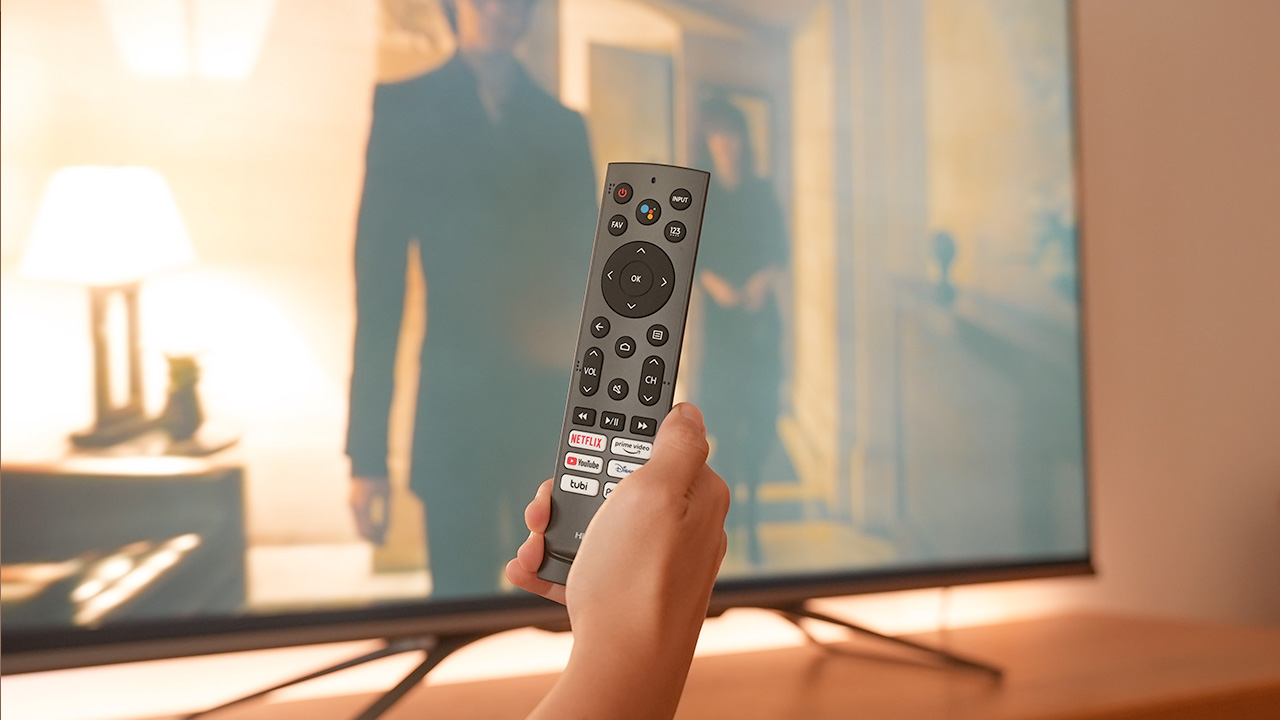 The Hisense U8G TV remote is so handy and easy to use, with dedicated buttons for streaming apps like Netflix and Disney+

Setup is simple and easy, and navigation feels familiar. Just like on Android phones, it has Google Playstore where you can get your favorite streaming apps. Hulu which used to be notoriously sluggish on Android TV now runs smoother.

Get the 55-inch Hisense U8G TV on Amazon

Because it runs Android TV, Chromecast is also built-in. So it just take a few taps if you want to look at photos you took with your phone on the big screen. 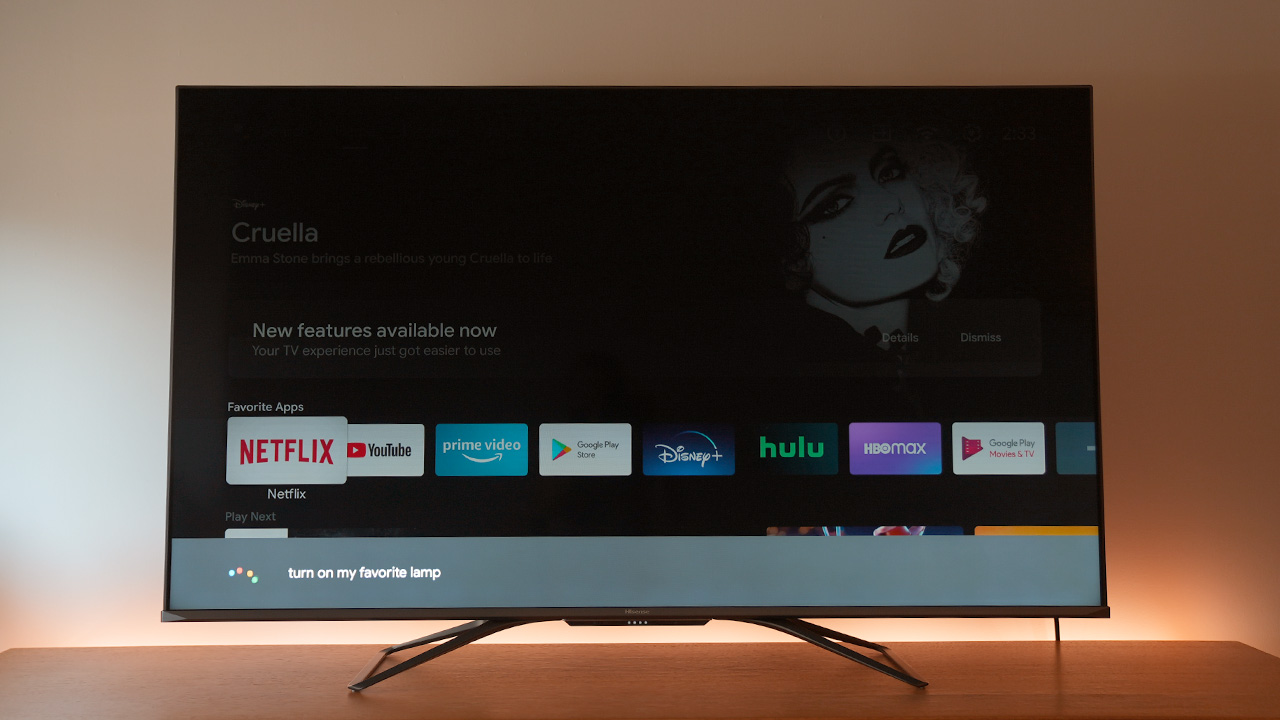 Google Assistant is also built-in so you can use it to control your smart home devices or ask it questions. Because I already have a Lenovo Smart Clock, I turn off the mic on the bottom of the TV. When I do, it turns on four tiny yellow lights on the bottom of the TV that are really distracting, especially when I’m sleeping.

The Hisense U8G TV has a very slim profile and narrow bezels. Out of the box it comes with one cord for power, which you plug in on the right side of the TV. On the left side are the rest of the standard ports you’ll find in a TV in 2021. 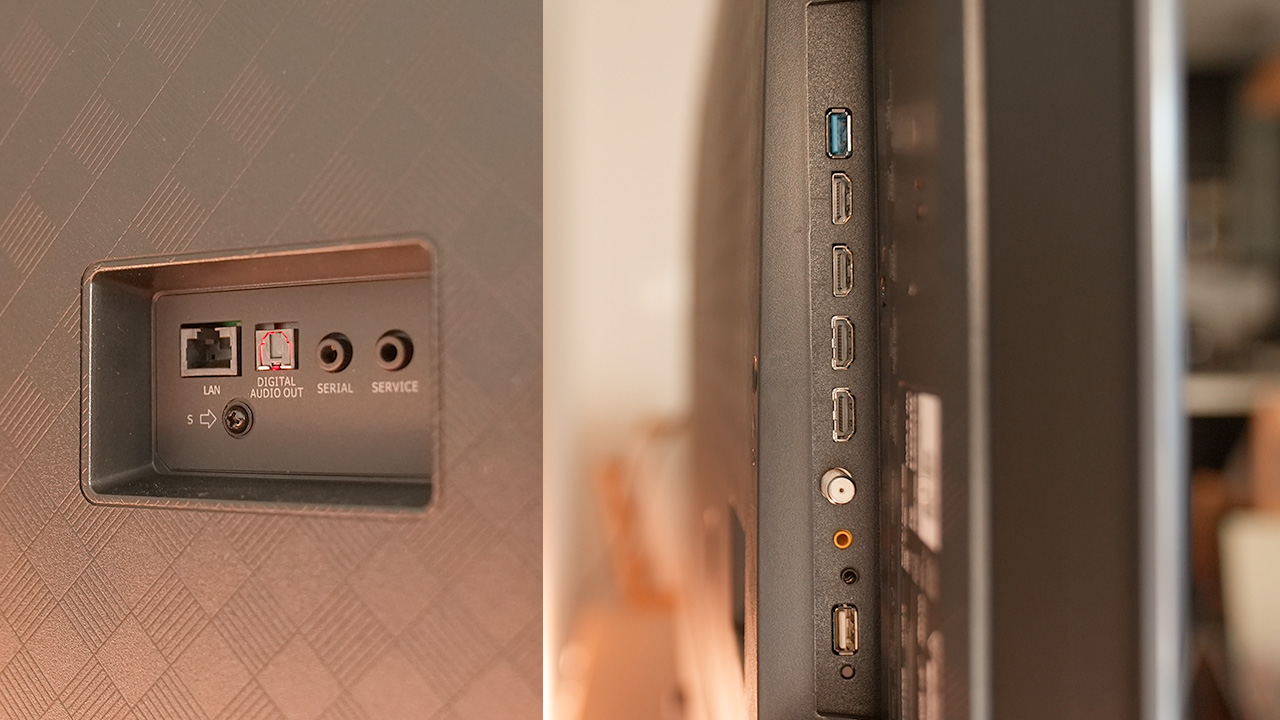 Out of the four HDMI ports, two are HDMI 2.1 and one of which is the eARC port. This is great if you want to connect a better sound system as audio quality isn’t its strong suit.

My biggest gripe, and probably one of the compromises when it comes to this TV is its design. While its screen is bright and all, the way it looks isn’t something that blends well with my decor. The TV stands out — in a bad way. 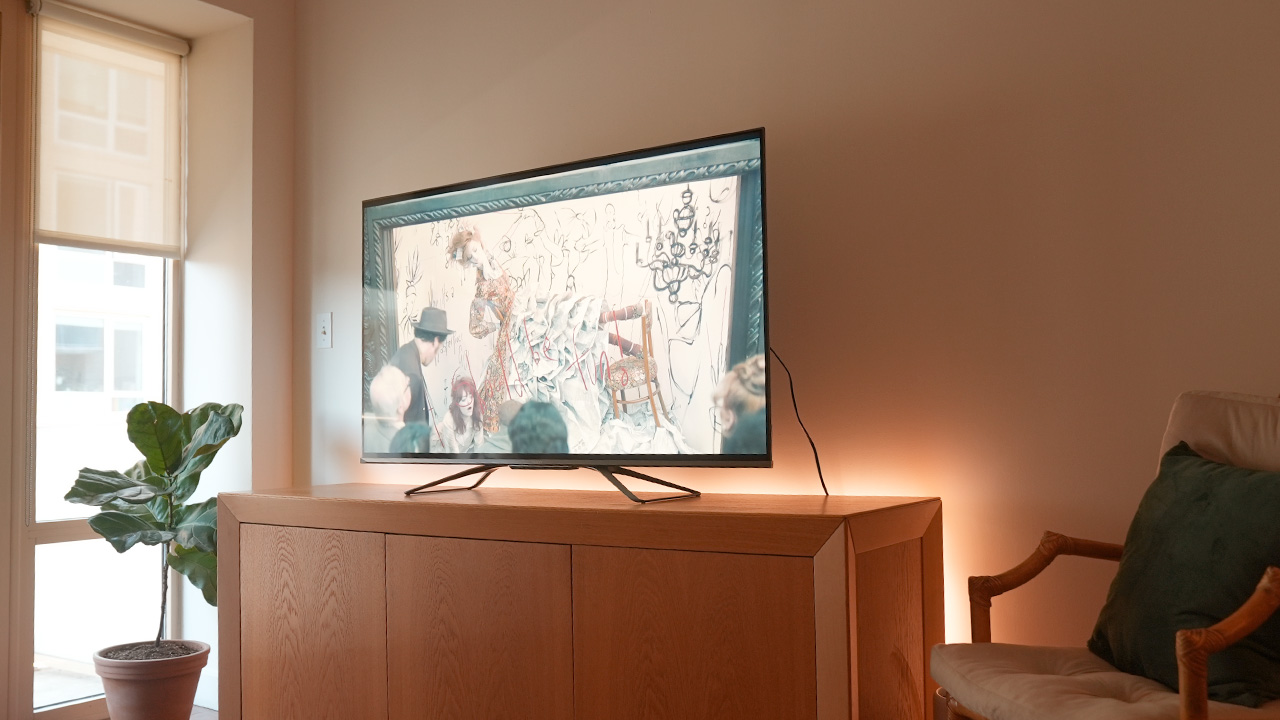 Unlike Cruella’s window display, the U8G’s design stands out in a bad way

When I’m watching TV, I sometimes find myself getting distracted by its legs or the very visible power cord plugged on the right side. While this is highly subjective and not as important to some, its design detracts from how immersive the viewing experience could be on this TV. 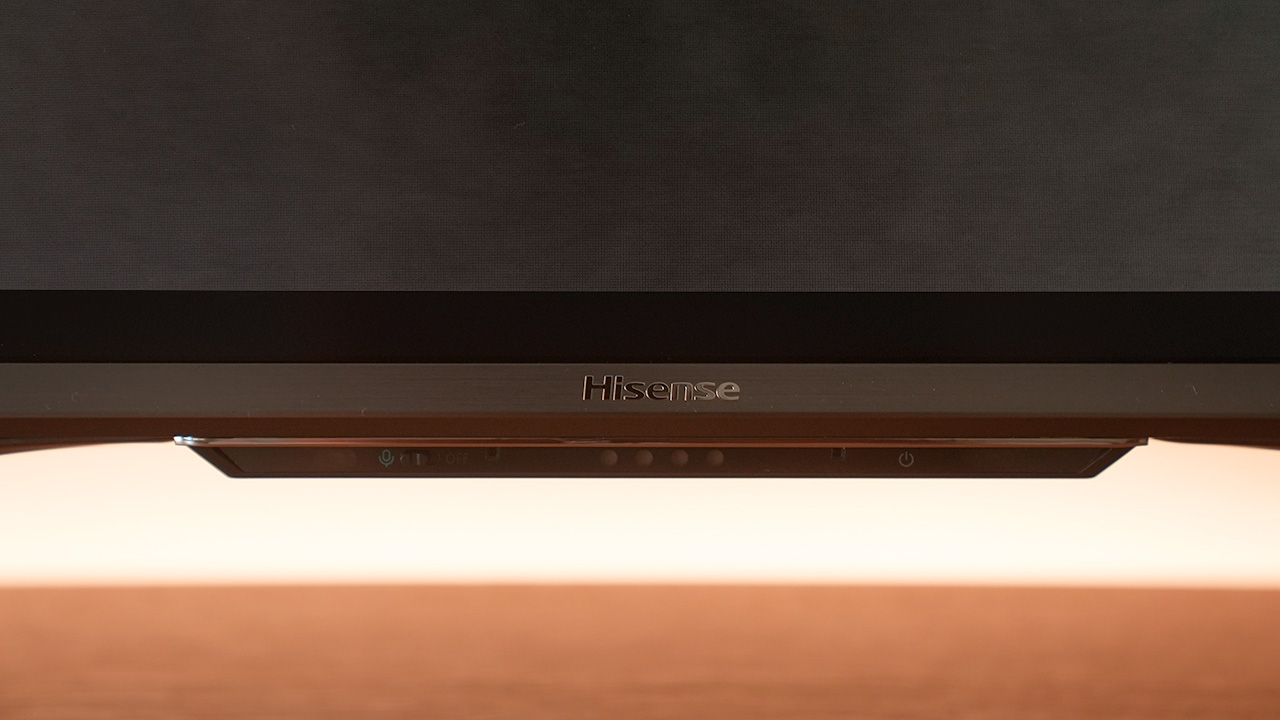 Starting at just US$ 999.99 for the 55-inch model, the U8G series of TVs is a great premium option for those on a tighter budget. If you are looking for a great TV in 2021 that has it all, the Hisense U8G TV is it. You will be highly satisfied watching content on this, especially since it also won’t cost you a fortune. 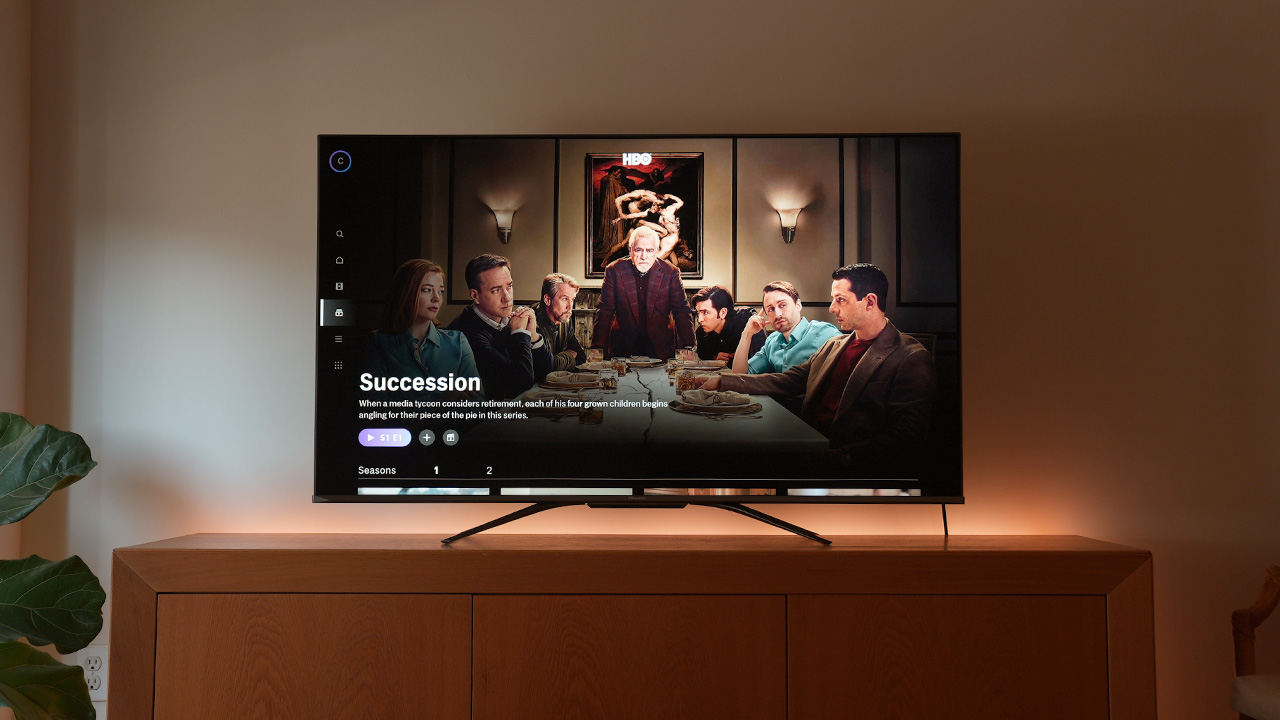 It’s not the most good looking TV nor is it the best sounding, but its price to performance ratio is unmatched. Hisense has always offered great value for money options, so it’s no surprise that the U8G series can compete against more expensive TVs like the Samsung QN90A QLED.

The best part is it runs Android TV, which I personally find to be the best TV OS and interface on the market right now.

You can buy the Hisense U8G TV on Amazon, or see Hisense’s Amazon store for their other TV offerings.