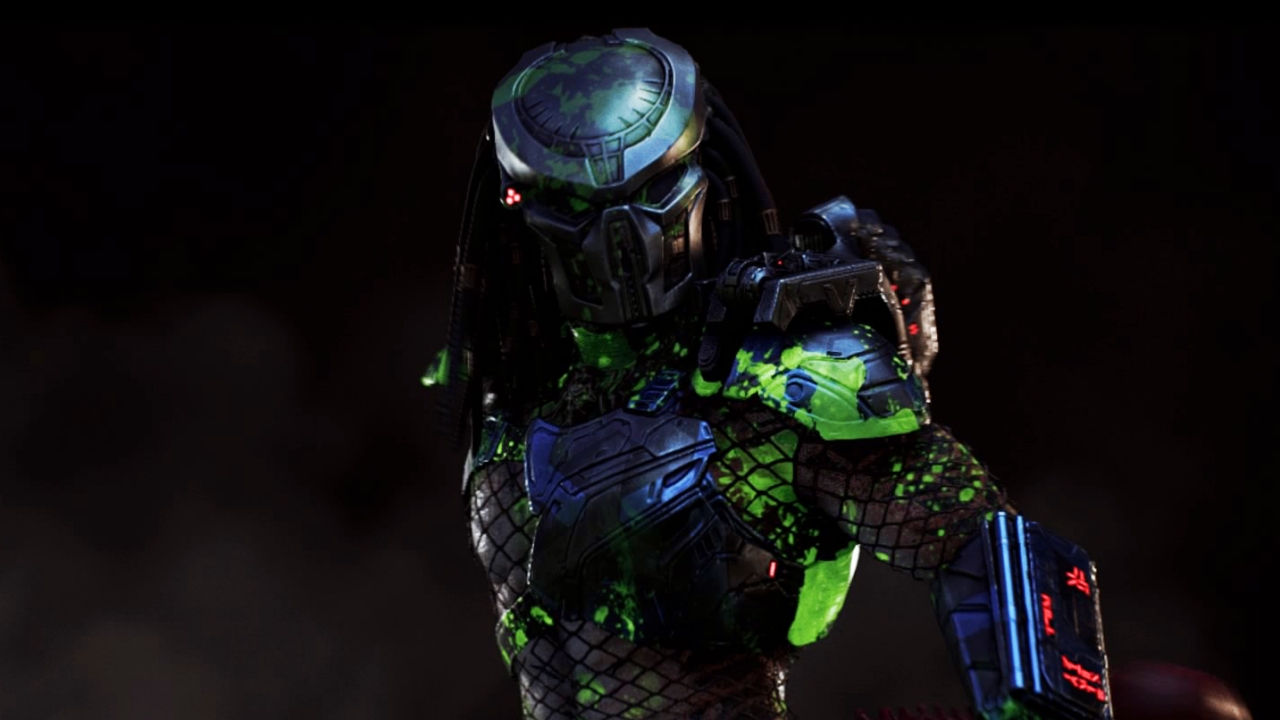 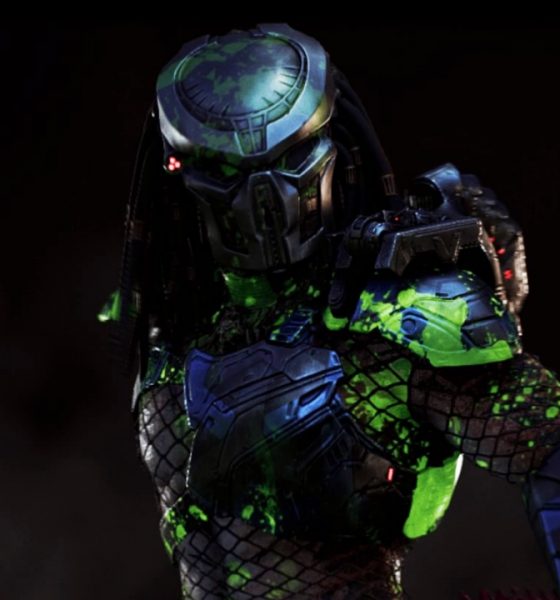 Predator: Hunting Grounds review – Where the Predator becomes the prey

Reviewed on a PS4

Those who are old enough to remember this super-alien antihero in their childhood days should enjoy a slight bit of nostalgic satisfaction from playing developer Illfonic’s take on the 1980’s sci-fi action film, The Predator.

Younger gamers, however, will be left scratching their heads as to why this not particularly popular movie was turned into a video game.

Illfonic is the same dev behind the movie-to-video game adaptation of Friday the 13th. And while they had the good intention of trying to present a similar experience with their 4-vs-1 format, Predator: Hunting Grounds manages to fall just short of expectations.

Predator: Hunting Grounds is an immersive asymmetric shooter set in the jungle, much like in the iconic film. As soon as you play your first game, you’re presented with a choice. Either play as one of four Fireteam members, or play as the Predator. 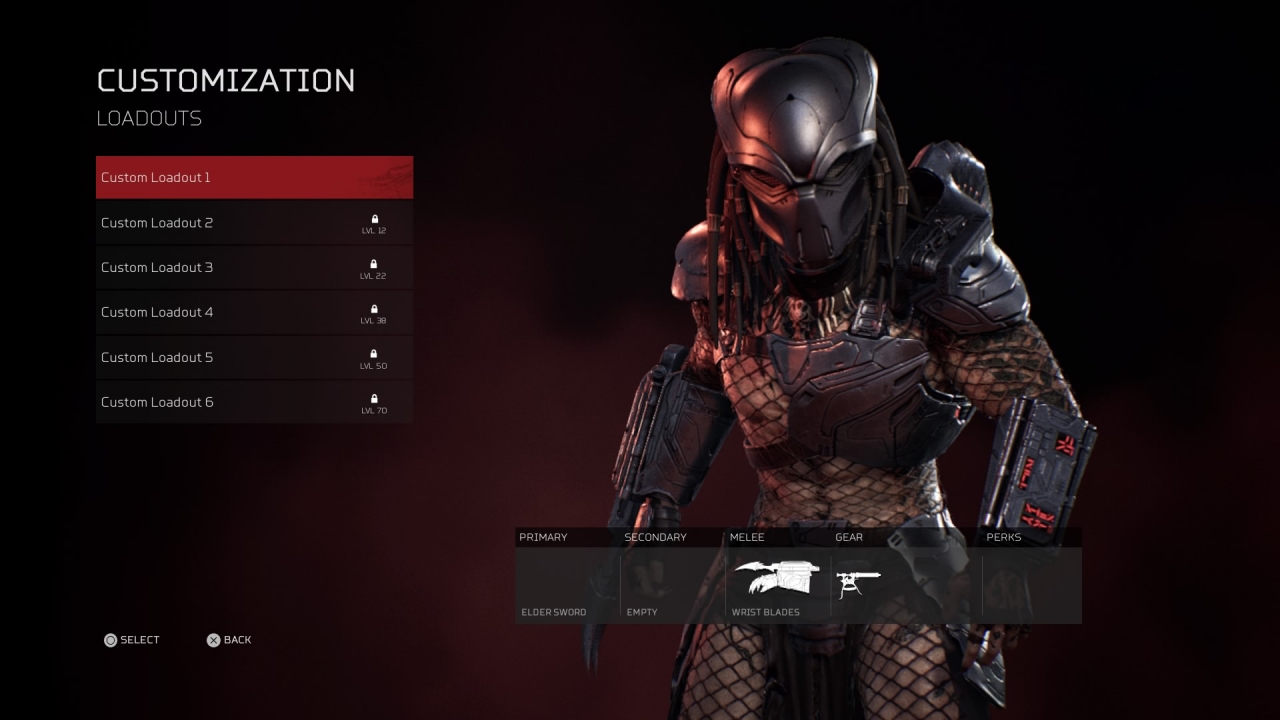 While many players no doubt want to experience being a badass alien war general moving swiftly through thick jungle to eliminate anyone and anything in its path, it really isn’t that simple. You have to actually be good at being the Predator for it to be any sort of fun.

In addition to that, playing as the Predator involves lengthy wait times. From the bit that I played, I averaged between five to seven minutes in queue. One time, it took me a whole 10 minutes before I got in.

This saw me play on the Fireteam more often than not, which ironically led to a much better experience. 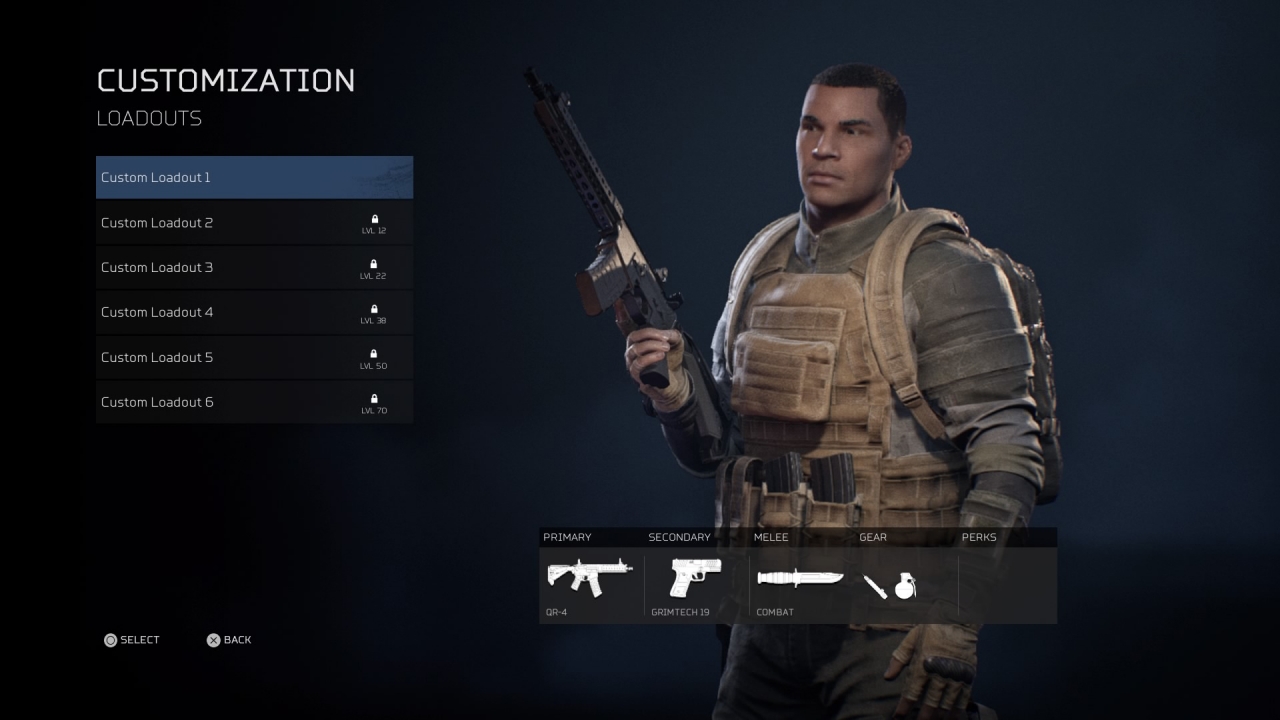 When I was able to control the Predator, I was embarrassed constantly. Herein lies the biggest problem Predator: Hunting Grounds has. Playing as the Predator is not all it’s cracked up to be. Being a member of the Fireteam was so much more fun.

Sure, the Predator can maneuver himself effortlessly through the lush forest, jumping from tree to tree with ease, while taking advantage of a plethora of abilities designed to terrorize other players. He can shoot lasers from long distances, can track foes with heat signatures, and can even cloak himself with partial invisibility.

It all sounds pretty terrifying on paper, but we’re instantly reminded that the Predator is being maneuvered by a human being sitting at home with a PS4 controller. And if you’re not any good playing as the Predator, then things go south pretty quick. Sometimes, it’s so easy to beat the Predator, it’s almost laughable.

Predator: Hunting Grounds is a fully-online experience. There’s no campaign mode where you have to go through any backstory.

Cosmetics of Fireteam members are customizable, and the game has loot boxes featuring various aesthetic options, if you’re into that sort of thing. It doesn’t take long for you to get your loadouts starting to look cool.

Once you’re in-game however, action quickly transforms into a mindless shooter with really no distinct or standout moments. Every session feels the same — you head into the jungle, looking to complete a set of seemingly unimportant tasks. You go through the motions, as if you’re there just to check off boxes. 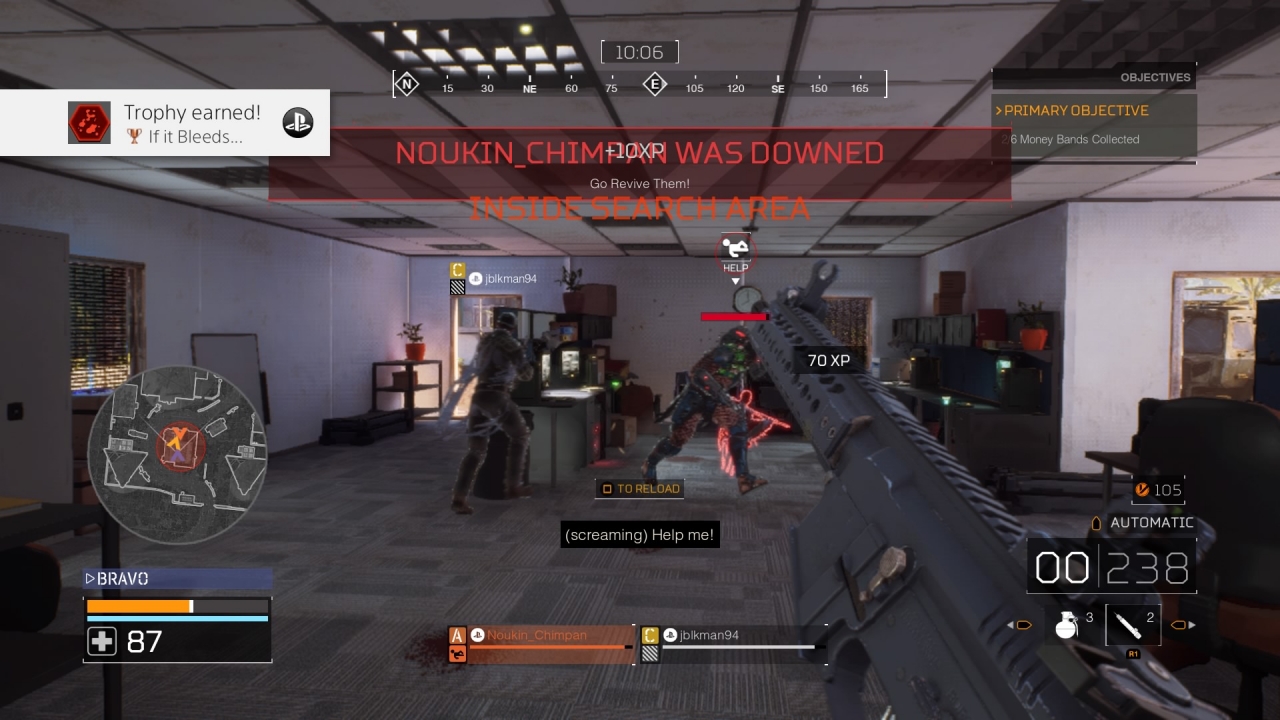 There are a handful of maps but they all look and feel alike, and offer pretty much the same experience. There are NPC’s roaming around, but sadly, the AI is really, really bad. They keep going down the same passages, and you can predict where they will pop up next. On top of that, they’re very easy to kill and don’t pose much of a threat if you move around enough.

The real fun begins when the Predator enters the picture. Admittedly, if the player controlling him is good enough, then the tension spikes and it becomes a real challenge. There were a few rounds where I was genuinely on edge, as was the rest of my team.

Unfortunately, these playthroughs were few and far between. The Predator sucked more often than not, and he was very easy to kill, especially if Fireteam members stuck together. With four guns pointing at just one Predator, he’s no match.

Gameplay is so simple, and there really isn’t much strategy necessary for victory on the Fireteam side, that I rarely found myself conversing at all with any of my teammates. There’s just no need to do so. In my opinion, this takes a lot away from the enjoyment this particular 4-vs-1 format potentially has.

If it’s any consolation, the graphics are above average. There are a few hiccups here and there, with textures not loading fast enough for you to notice. The camera is sometimes an issue, especially around tight corners, and the framerate is just horrendous and erratic. These should be fixed in future updates though, hopefully, and they aren’t too bad that it will impact the game in a negative way.

Nevertheless, the game is beautiful and really nails the feel of the jungle with the bright colors and the realistic looking surroundings. Sound design is pretty decent, from the squishes boots make when treading through the mud, birds chirping lightly in the breeze. And then the iconic Predator wail that signifies he has entered the area. It all really makes for an immersive experience. 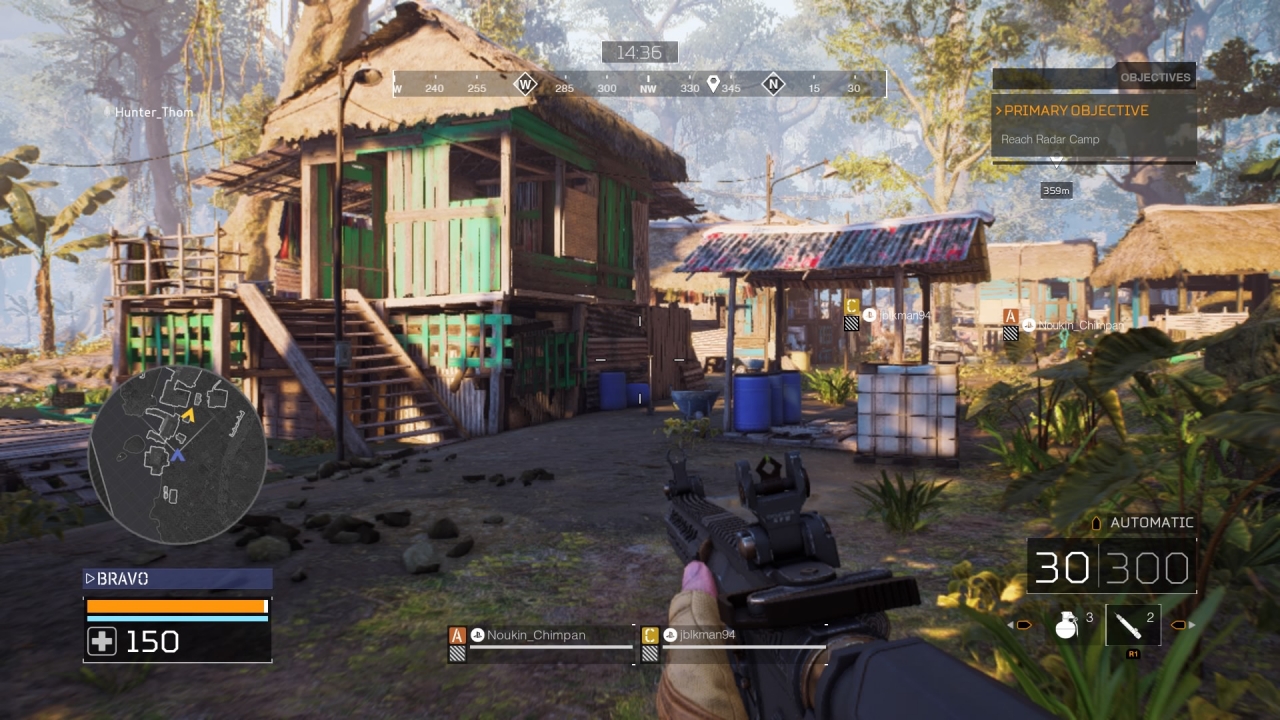 The Predator does look awesome, and is also customizable to your liking. Faithful fans of the franchise will be pleased with how good their favorite baddie looks. Turning on invisibility mode is fun, and lets you move around the jungle undetected. You can go for some flashy stealth kills, or go all-out with your explosive lasers.

To balance things out a bit, the Predator relies on an energy bar that depletes quickly enough so that he’s not too powerful. It regenerates after some time, and after the Predator takes time to heal up, the hunt is back on again.

Predator: Hunting Grounds is okay to play in the first few hours of diving into the lush jungles, whether as one of four Fireteam members, or as the iconic Predator himself. Fans of the franchise will certainly like it more than others, and that’s understandable. It was made with good intentions. However, I can’t change the fact that right now, it’s a disappointment and hard to recommend. 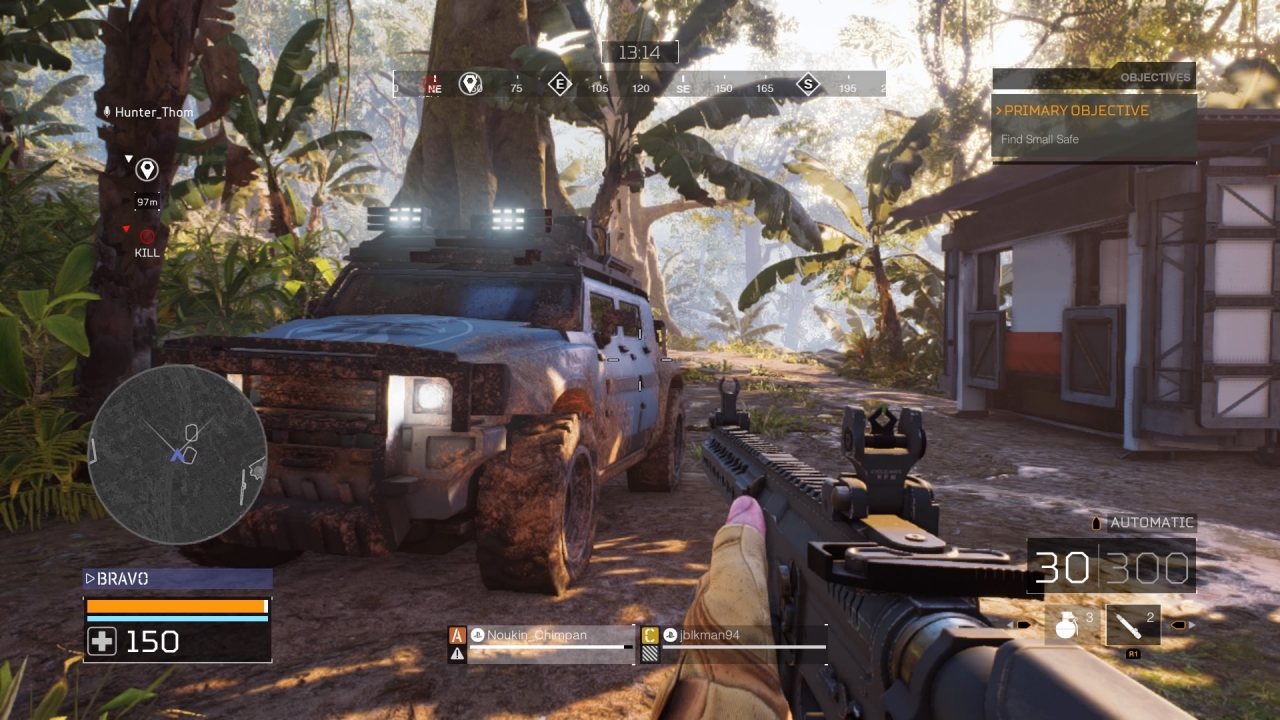 Things largely rely on the player controlling the Predator for it to be any fun at all. I guess it was the same with Friday the 13th, too. But at least in that game, the four other players couldn’t really kill you as easily. The masked madman Jason was significantly more formidable than the oftentimes extremely frail Predator.

In fact, eliminating the Predator, in theory, should be the most enjoyable element of this game. I mean, taking down a killing machine by outsmarting it and working as a team should be fun right? Unfortunately, it’s so easy to kill the Predator, and it happens far too often for it to provide any satisfaction.

With Predator: Hunting Grounds, things get old very fast, and you’re stuck in a repetitive loop of progressively boring gameplay that just fails to hit the mark.

Predator: Hunting Grounds was reviewed on a PS4 by Carlos Cinco. He is a longtime Combat Sports Journalist, who has contributed to top Philippine media including Rappler, FOX Sports Asia, Solar Sports, and more. He currently writes for Singapore-based martial arts organization, ONE Championship. On his free time (if he ever gets any), he plays video games. You can contact him at [email protected]