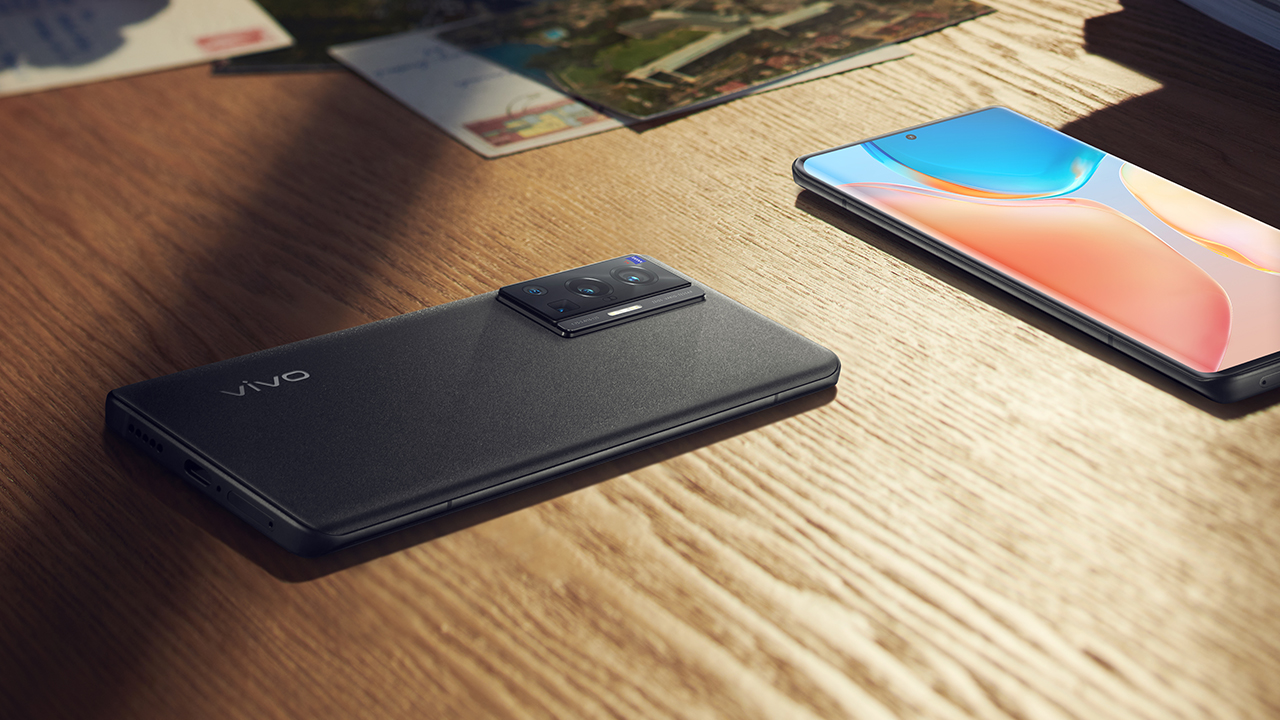 Over the past year, Chinese smartphones have risen through the rankings of smartphone brands all over the world. vivo, riding the same wave, wants to keep the hype going. Today, the smartphone maker has launched the photography-centric flagship series, the vivo X70.

As for the main event, the leading flagship features a 50-megapixel Samsung GN1 main sensor, a 48-megapixel ultra-wide gimbal shooter for action shots, a 12-megapixel selfie-shooter, and an 8-megapixel periscope shooter with 60x zoom capabilities. vivo’s V1 imaging chip further bolsters image quality by reducing noise. It has a 32-megapixel selfie shooter shared throughout the series.

The phone also features IP68 resistance and a 4500mAh battery. It is also compatible with 55W wired charging and 50W of wireless charging.

Meanwhile, the X70 Pro features a MediaTek Dimensity 1200 processor with 8GB of LPDDR4 RAM and 128GB of UFS 3.1 internal storage.

The regular variant comes in the same colors as the X70 Pro and will retail for CNY 3,699 (or approximately US$ 574). 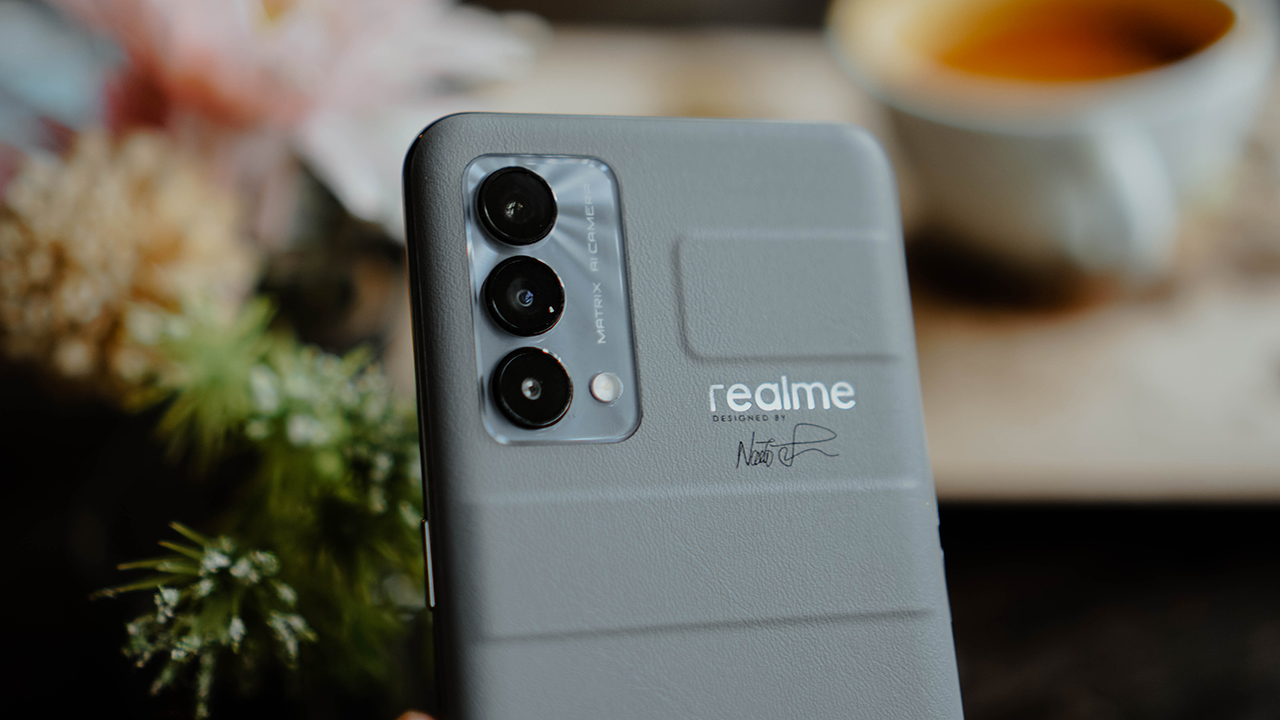 The realme GT Master Edition is a fine piece of tech. Spending roughly around 10 days with it, I can say it’s a pretty good midranger overall. So, this review is gonna be short and… I was tempted to say sweet, but I don’t think that’s the taste I’ll leave you with.

I’m going to jump right ahead to pricing. It’s always been one of realme’s strengths; offering great value products. That means you get a little more than what you pay for.

I’m gonna slap on the specs here once more so you can reference it as I babble about my time with the phone. 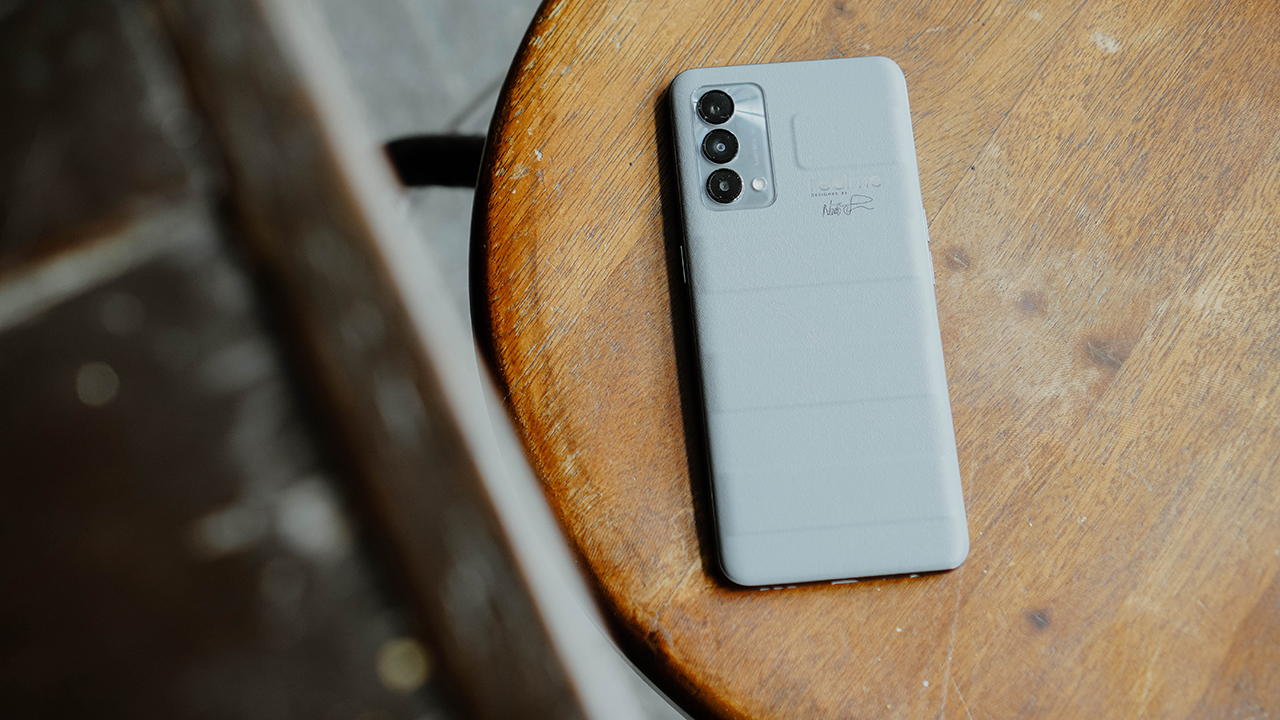 The realme GT Master Edition comes in two colors — Voyager Grey and Daybreak Blue. And two variants: one in 8GB+128GB and another in 8GB+256GB. Here are the pricing and pre-order details:

It’s right around the ballpark of my personal favorite midranger/sub-flagship — the OnePlus Nord 2 — a phone I was generally happy with. 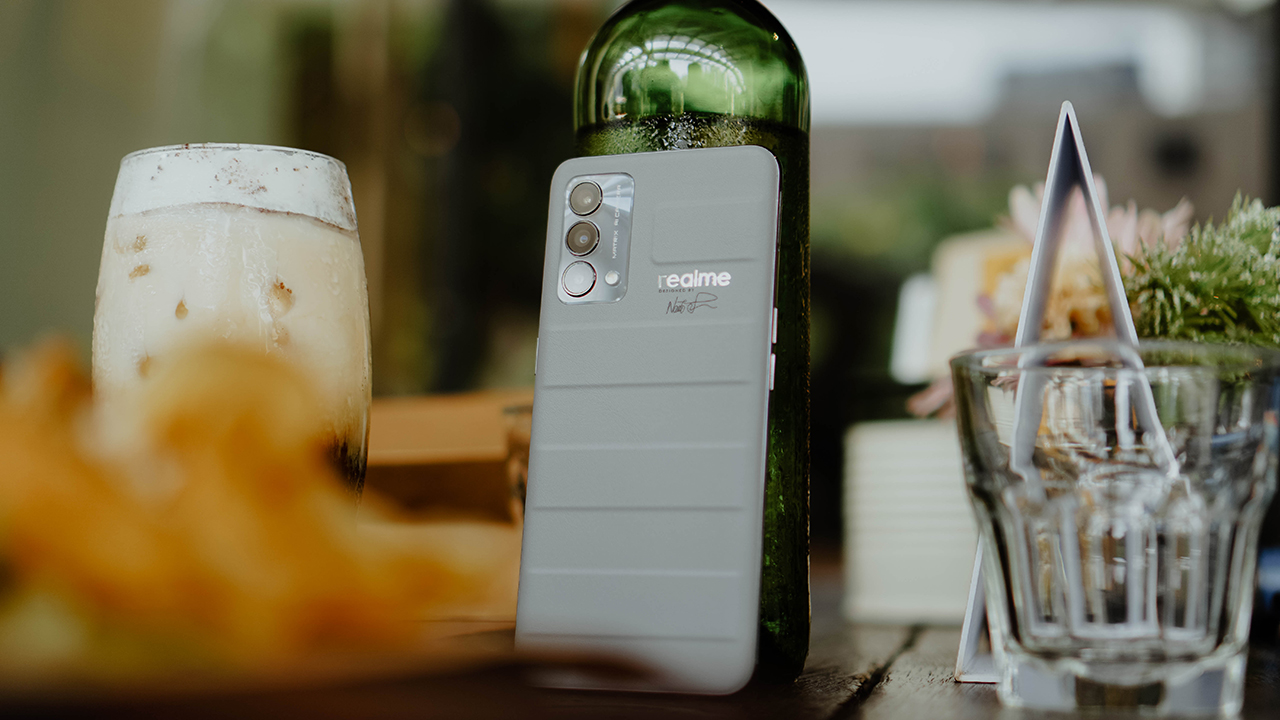 I had already expressed my opinion on the realme GT Master Edition’s design in the Unboxing and First Impressions article. TLDR:

I thought the size was perfect at first. Phones like this that have a 6.43” display are typically the ones I feel are in the sweet spot of not too big and not too small. However, after further use, I felt it could have used a little more chunk.

Without the included silicone-ish case, the phone gradually felt tiny in my hands. But I refused to use it with the case because it takes away from that fantastic leather feel. Perhaps they could have added another component or two to add some chunk and heft. Although, that may have pushed the price up which would betray realme’s whole “disrupt” approach. 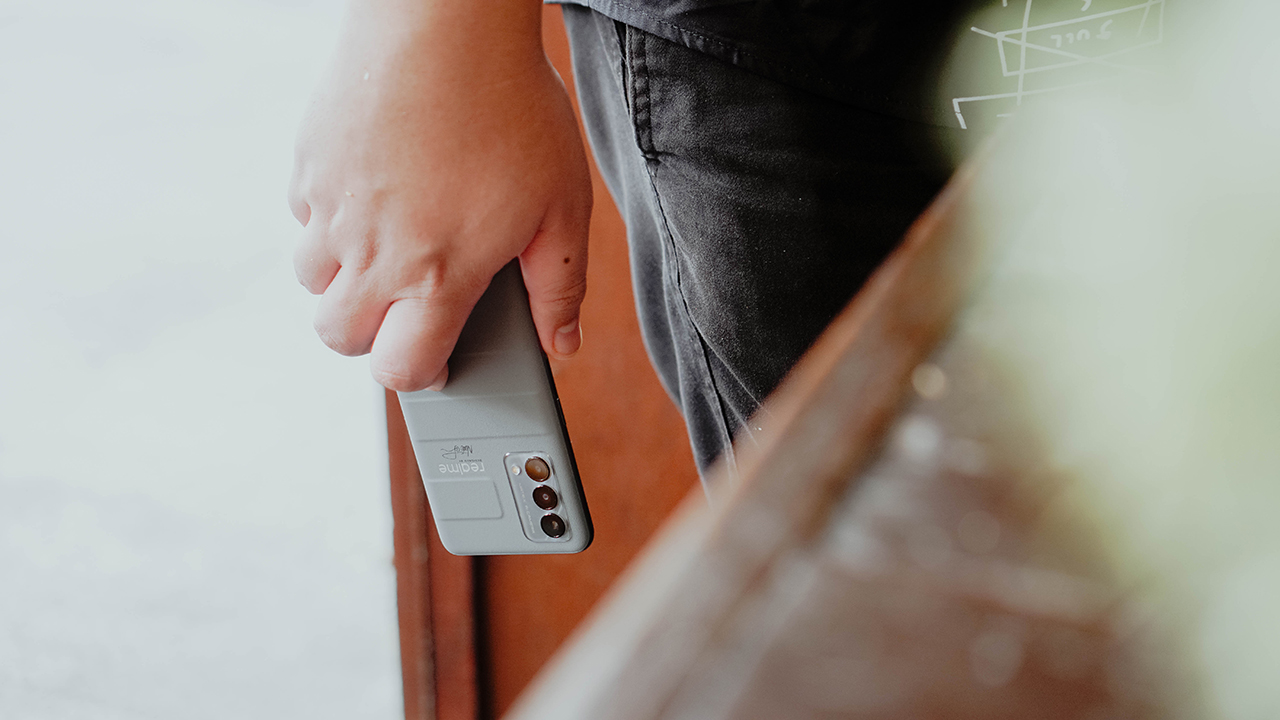 That said, it’s not entirely unsatisfactory. And how it feels in your hand will vary differently from mine. One thing’s for sure, most people will love the concave vegan leather back. It’s a material rarely seen in this category and realme deserves props for having the balls to include it here.

One thing I thoroughly disliked about the version of realme UI on the realme GT Master Edition is the incredible amount of bloat on the thing. You know how pre-installed apps take up some of the first home screen and maybe a little bit of the second page of the home screen. Well, this one took over half of the second page. That’s too much. 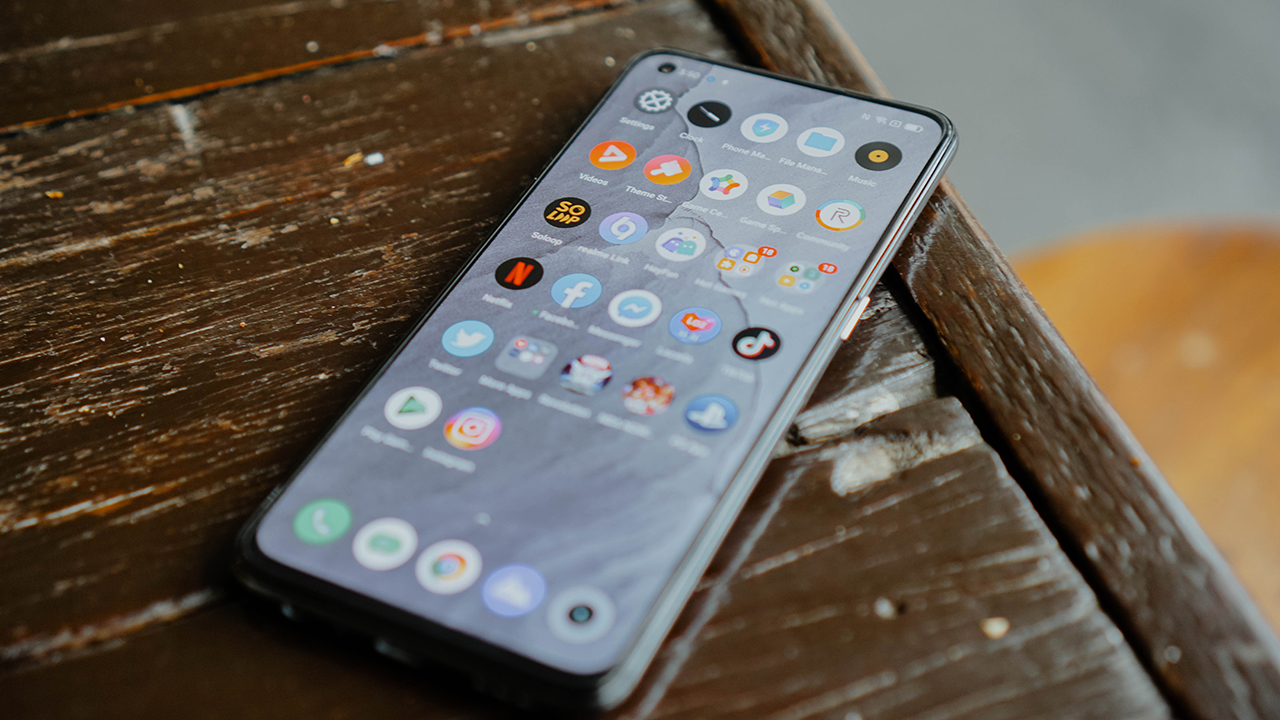 Sure, you have staples like Facebook, Messenger, and Netflix installed. But for every single one of those you get crap folders like Hey Fun, Hot Games, and Hot Apps. Yes, you can remove them, but it’s just inconvenient.

Speaking of inconvenient, that’s the only word I can think of to describe the App Market. Yes, it’s the same one found on some OPPO phones. It’s a hassle to have to go to the Google Play Store to install an app, but then have that same app go through the App Market for some security check before you can launch it.

I tried to figure out how to remove that extra App Market layer but eventually lost patience. This might be a minor inconvenience for some, but it is an inconvenience, nevertheless. 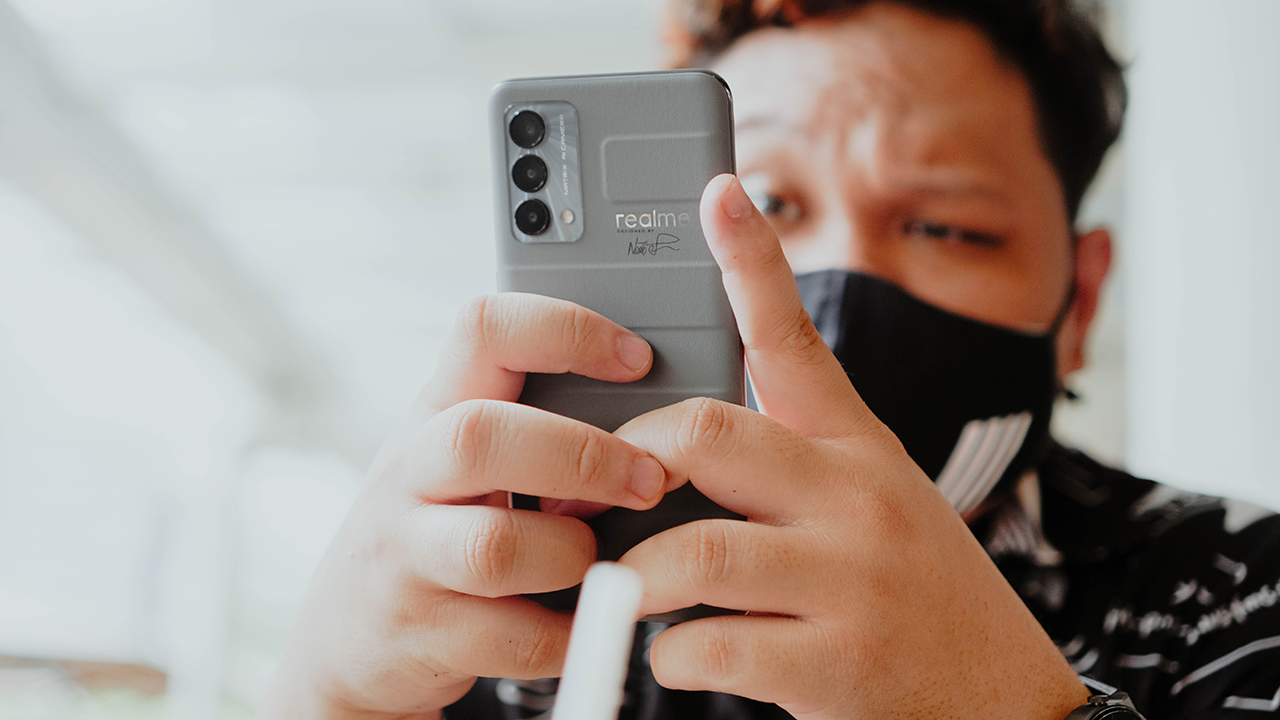 What sucks most is that these weren’t present in previous realme devices we reviewed. The realme UI is relatively clean, so this amount of bloat was a bit of a shock to my system.

Smooth despite the annoyance

I don’t want to leave you with the impression that I hated my time with the realme GT Master Edition. Despite the largely annoying additions when you fire up the device, it remains pretty smooth for whatever you want to do with it.

For me, that’s some casual browsing on Facebook, Twitter, and Instagram as well as mindlessly scrolling on TikTok before bedtime. I didn’t really do any work tasks on it other than using chat apps for coordinating with teammates and external partners. 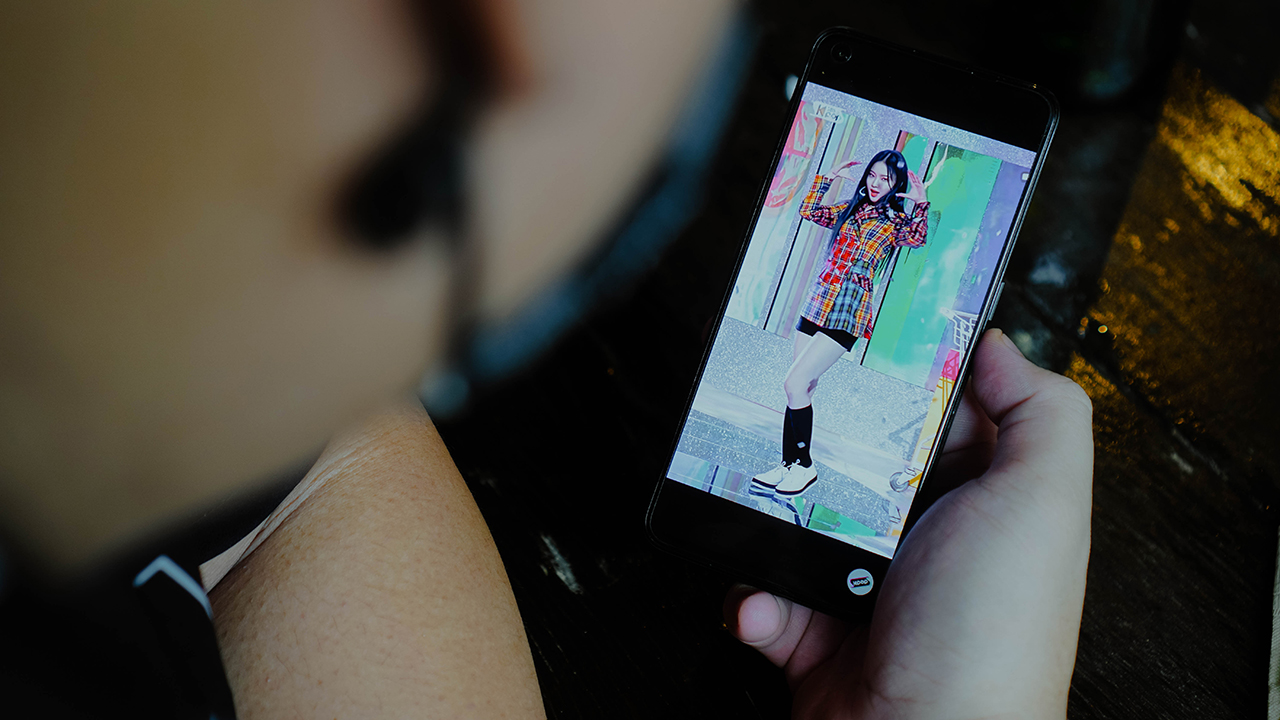 STAYC’s “Stereotype” is stuck in my head

Of course, I also snuck in some Netflix time in there for good measure. 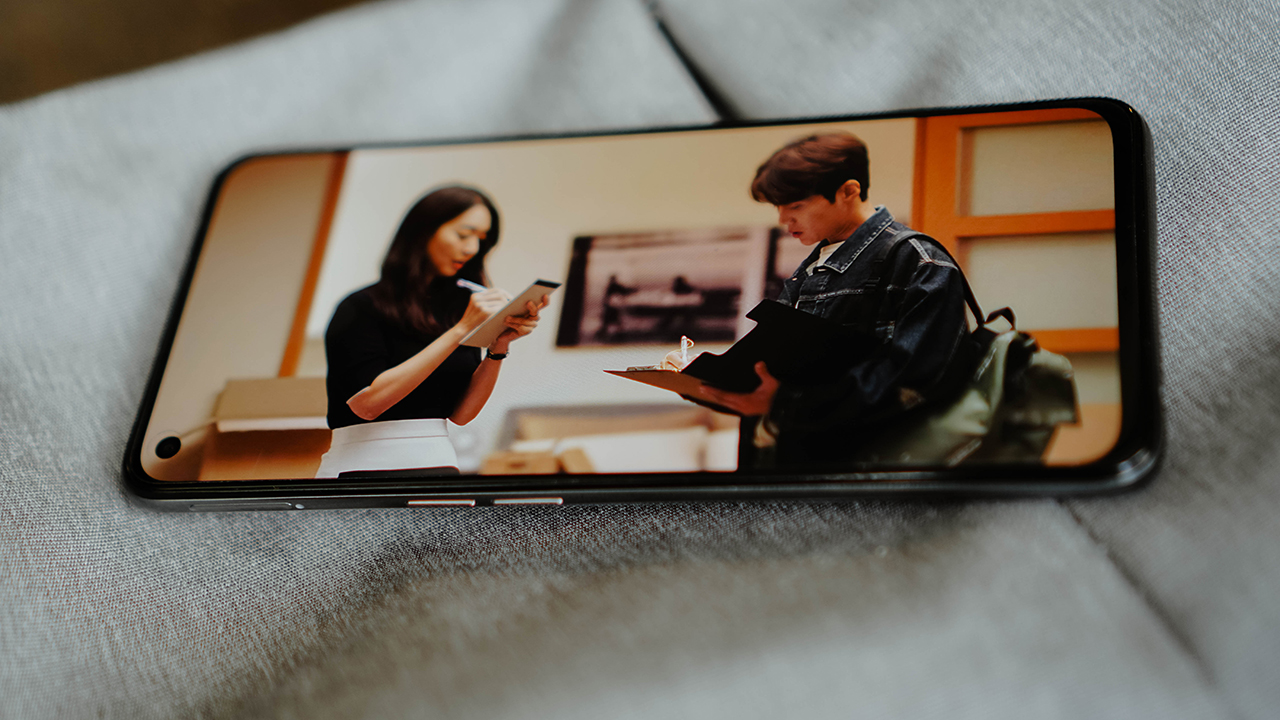 Most of my game time was also spent playing Marvel Future Revolution — which is the only other game on mobile I can tolerate other than Call of Duty: Mobile. 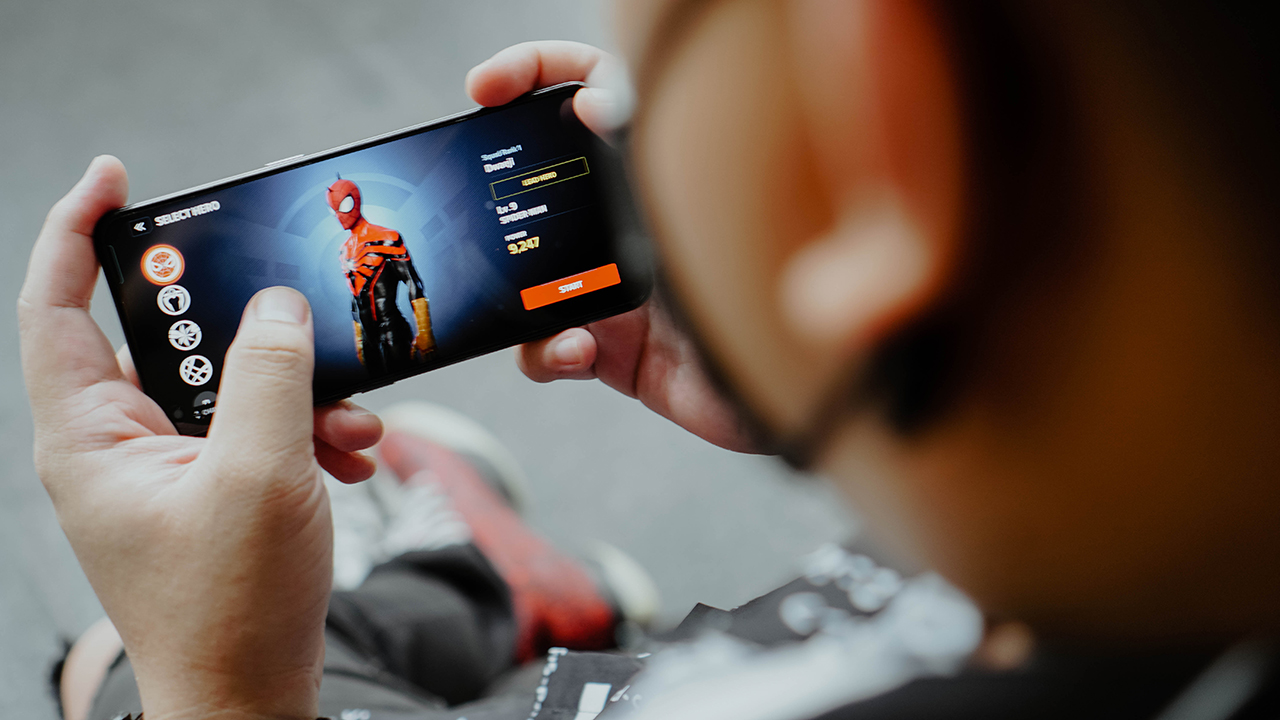 Glad to find another mobile game I can somewhat enjoy

I usually play after having lunch or breakfast to finish a mission plus a few sidequests. That takes about 20-30 minutes. The phone performed admirably while displaying fantastic graphics. It did heat up but nowhere near an alarming point.

It can go up as high as 120Hz for the refresh rate, but my personal recommendation is to stick with the default adaptive setting. This way, the phone will identify the best refresh rate for each app and will help conserve battery life. 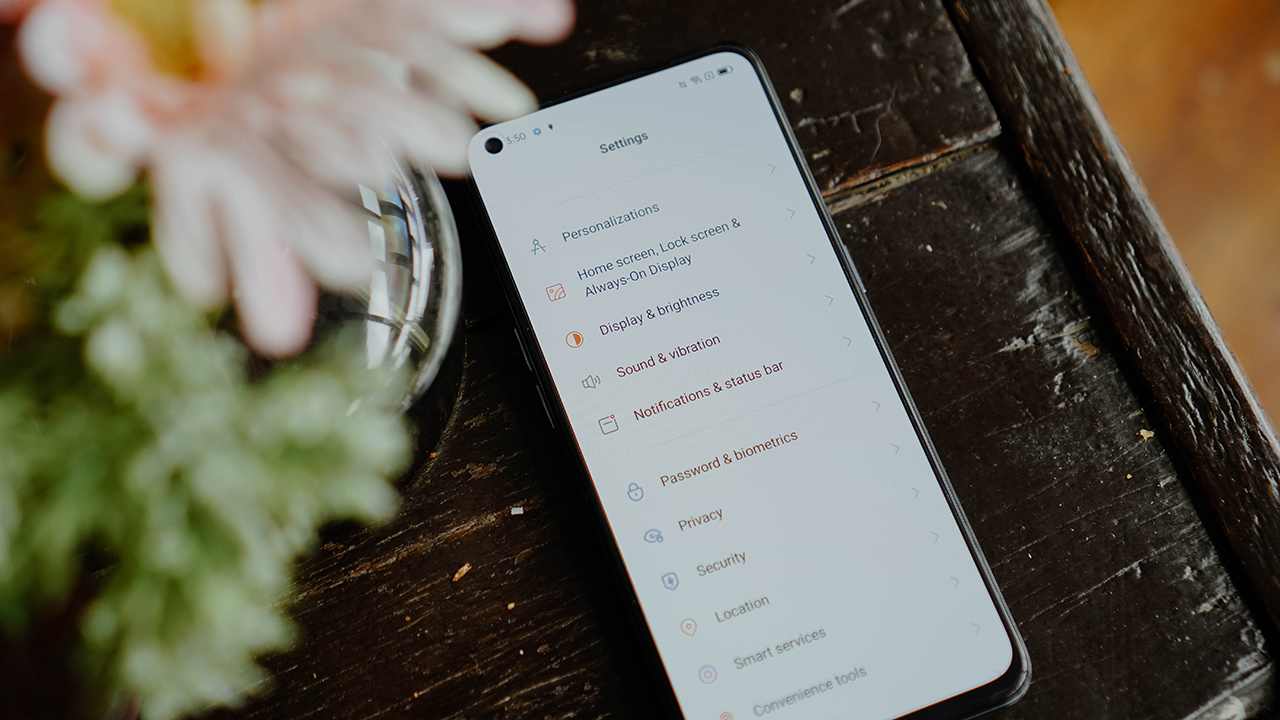 Speaking of battery life, this one’s right around what you would expect as well. It can last up to a day and a half for light to moderate usage, and one day for moderate to heavy usage. 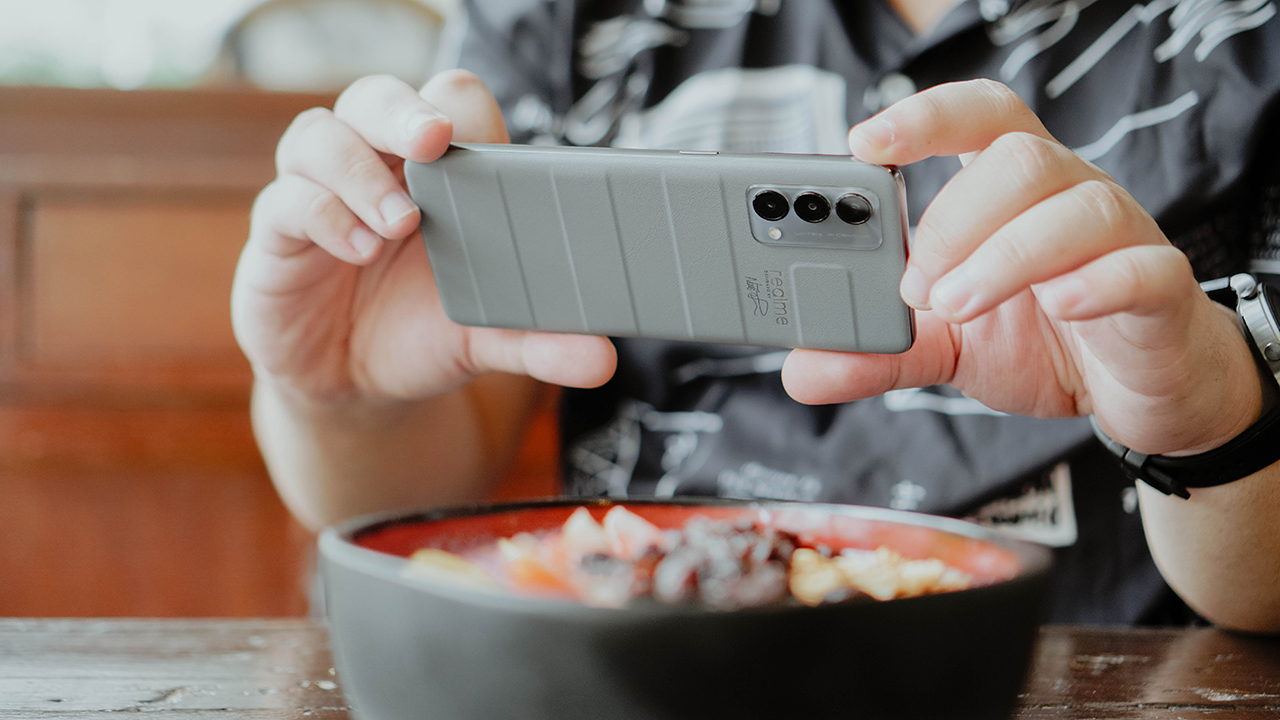 Most realme midrangers have pretty good cameras. In fact, I even convinced one of my friends to buy a realme phone simply by showing a few sample photos. The realme GT Master Edition is no different. So I’m gonna do the same thing and just drop some samples here. 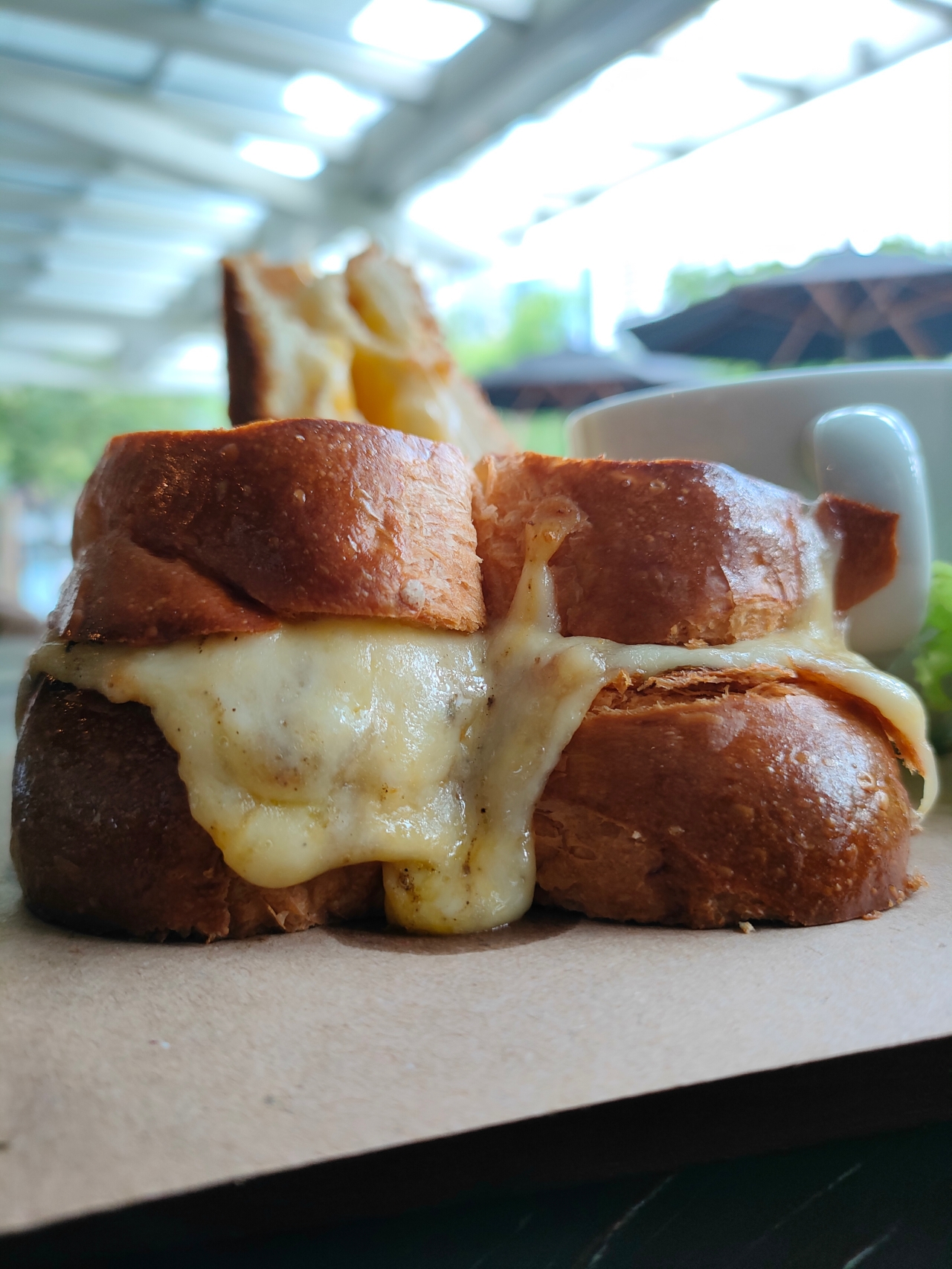 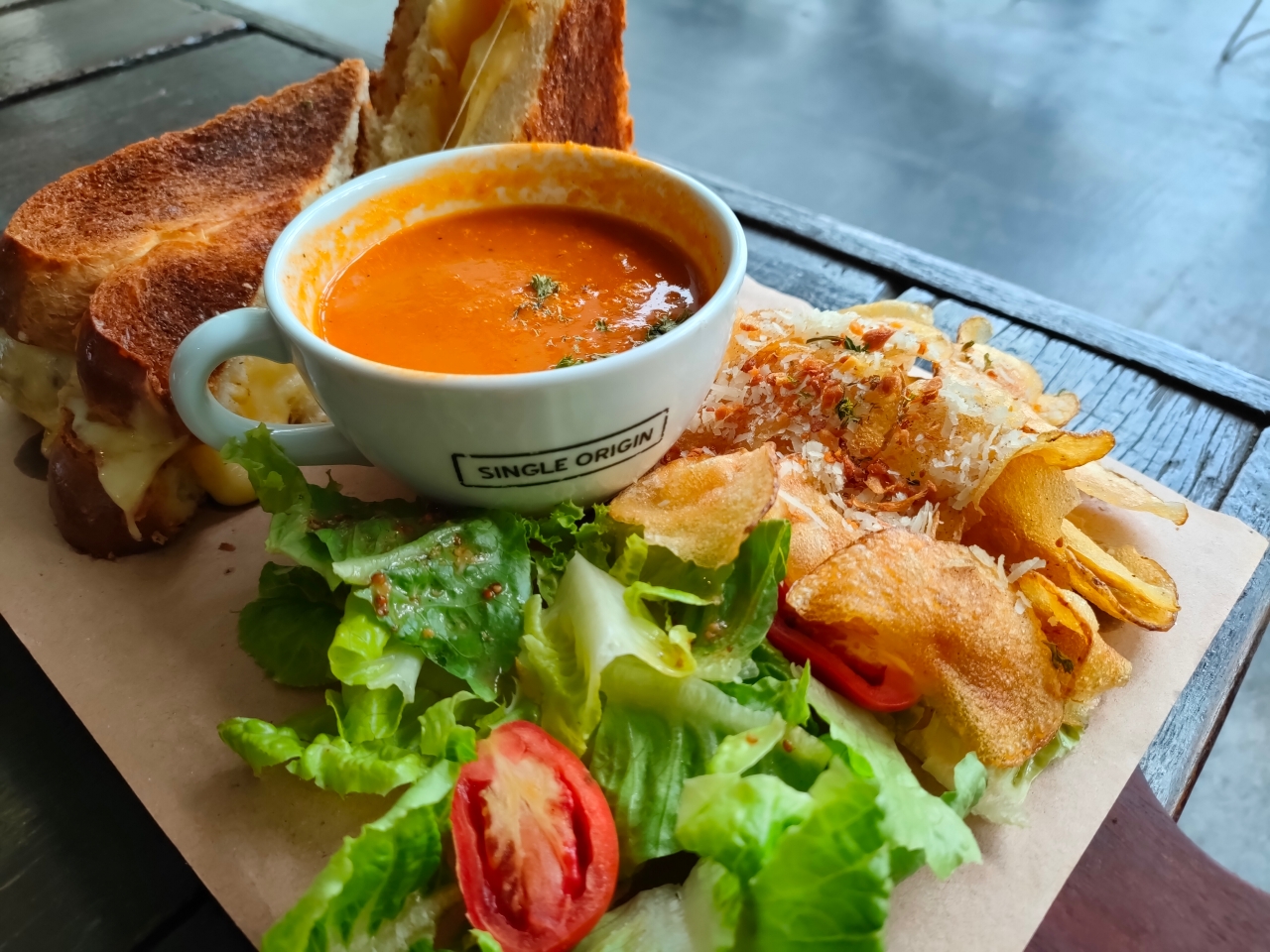 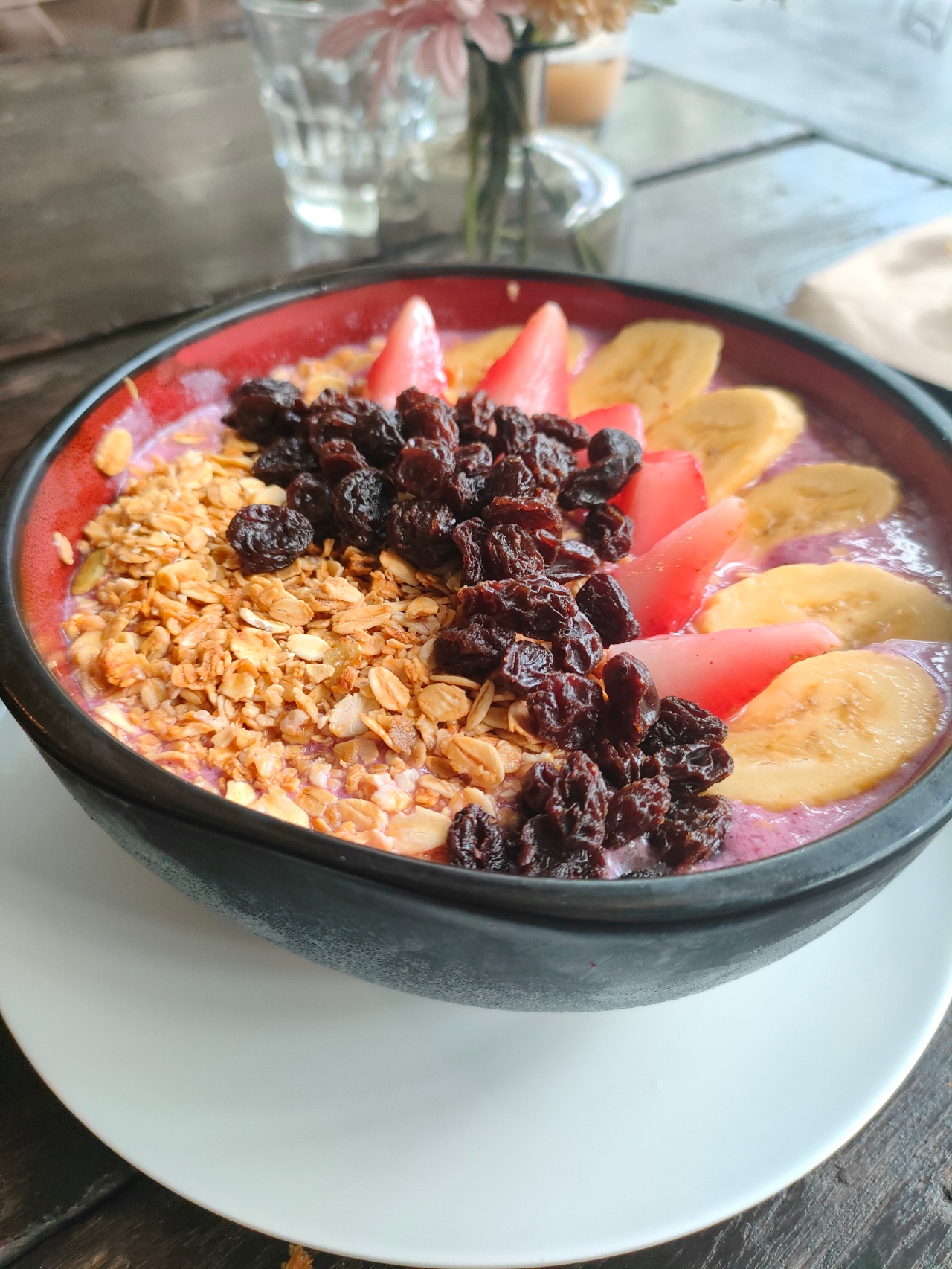 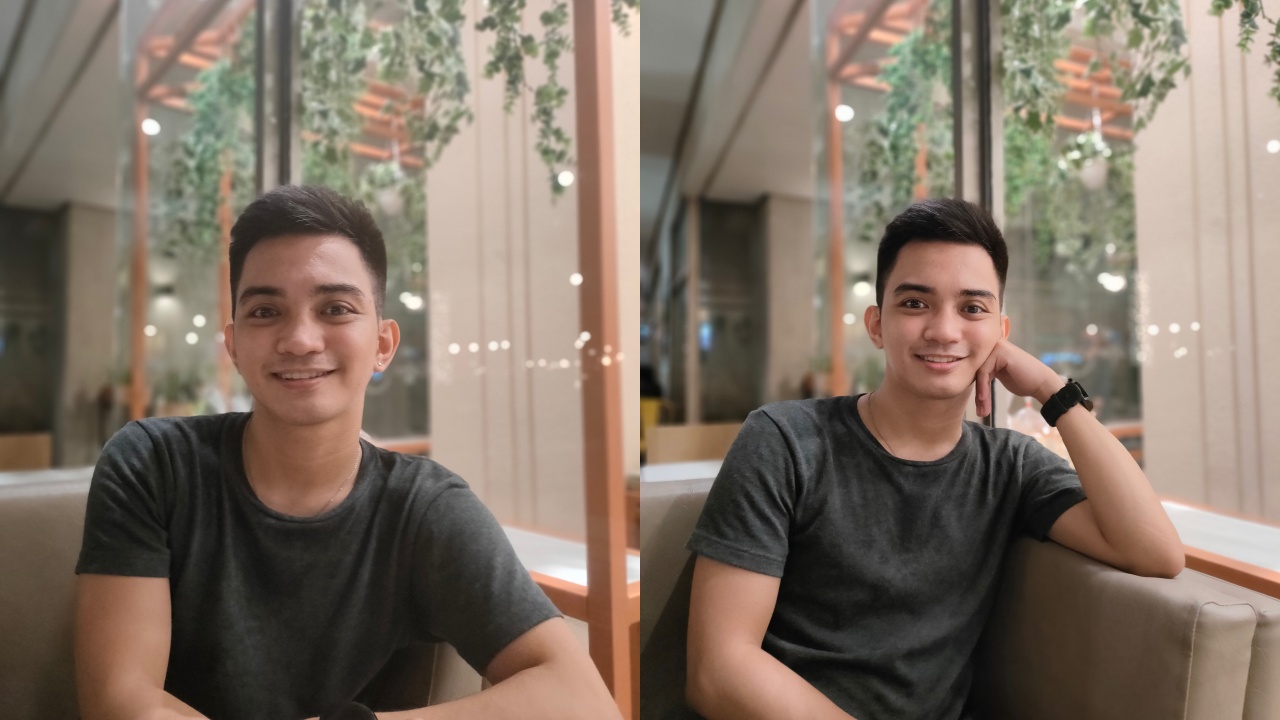 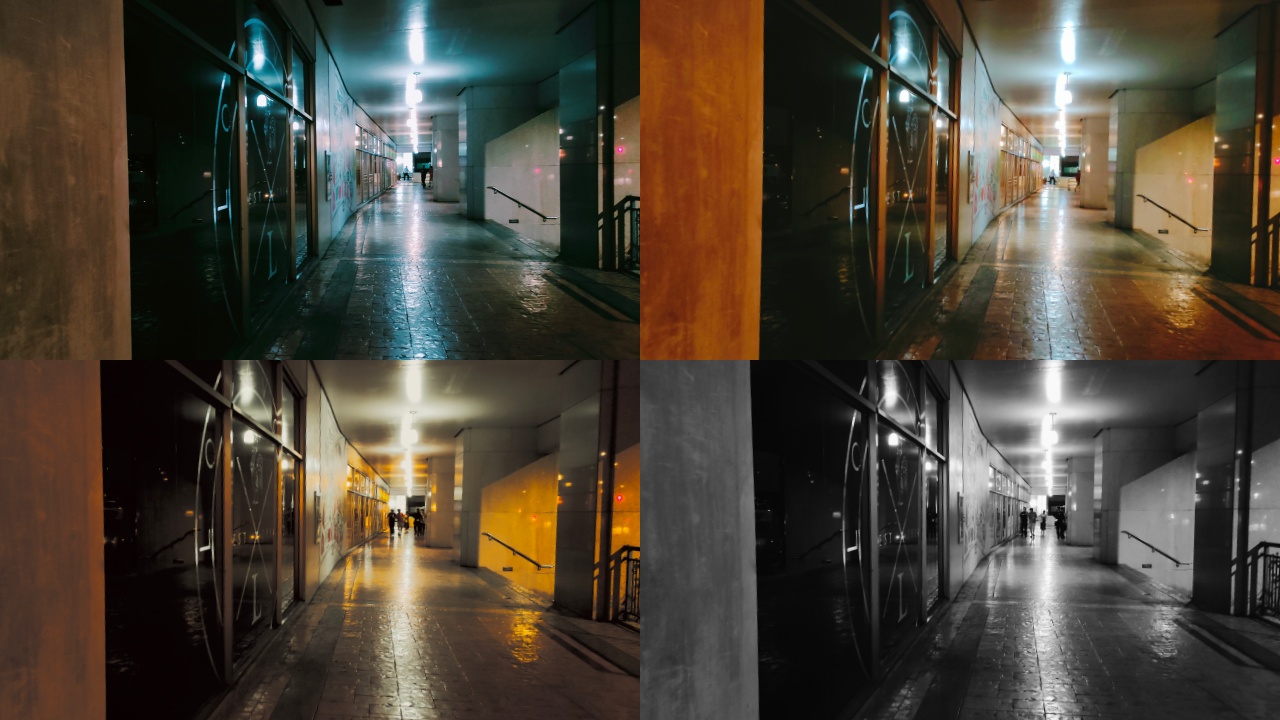 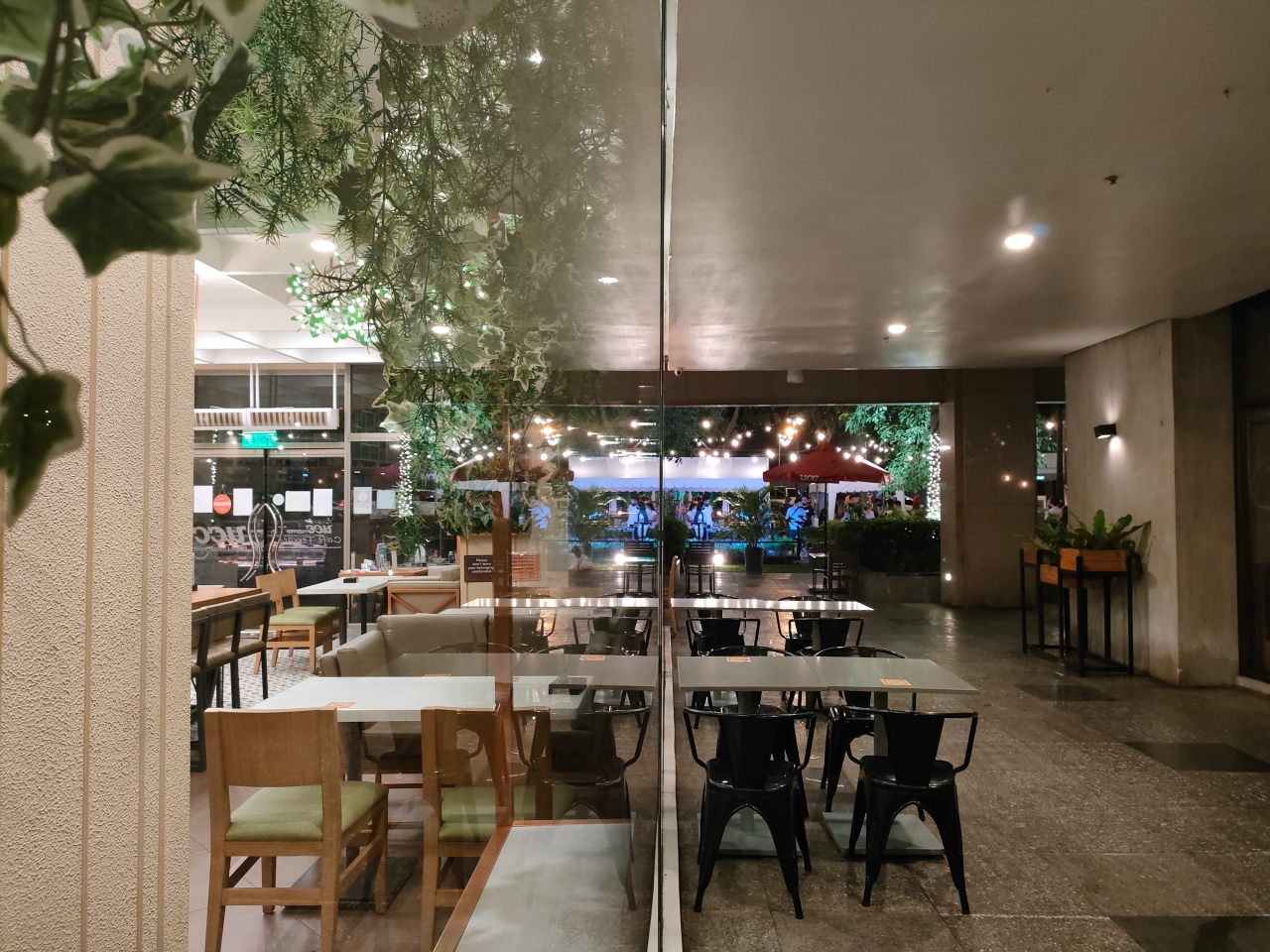 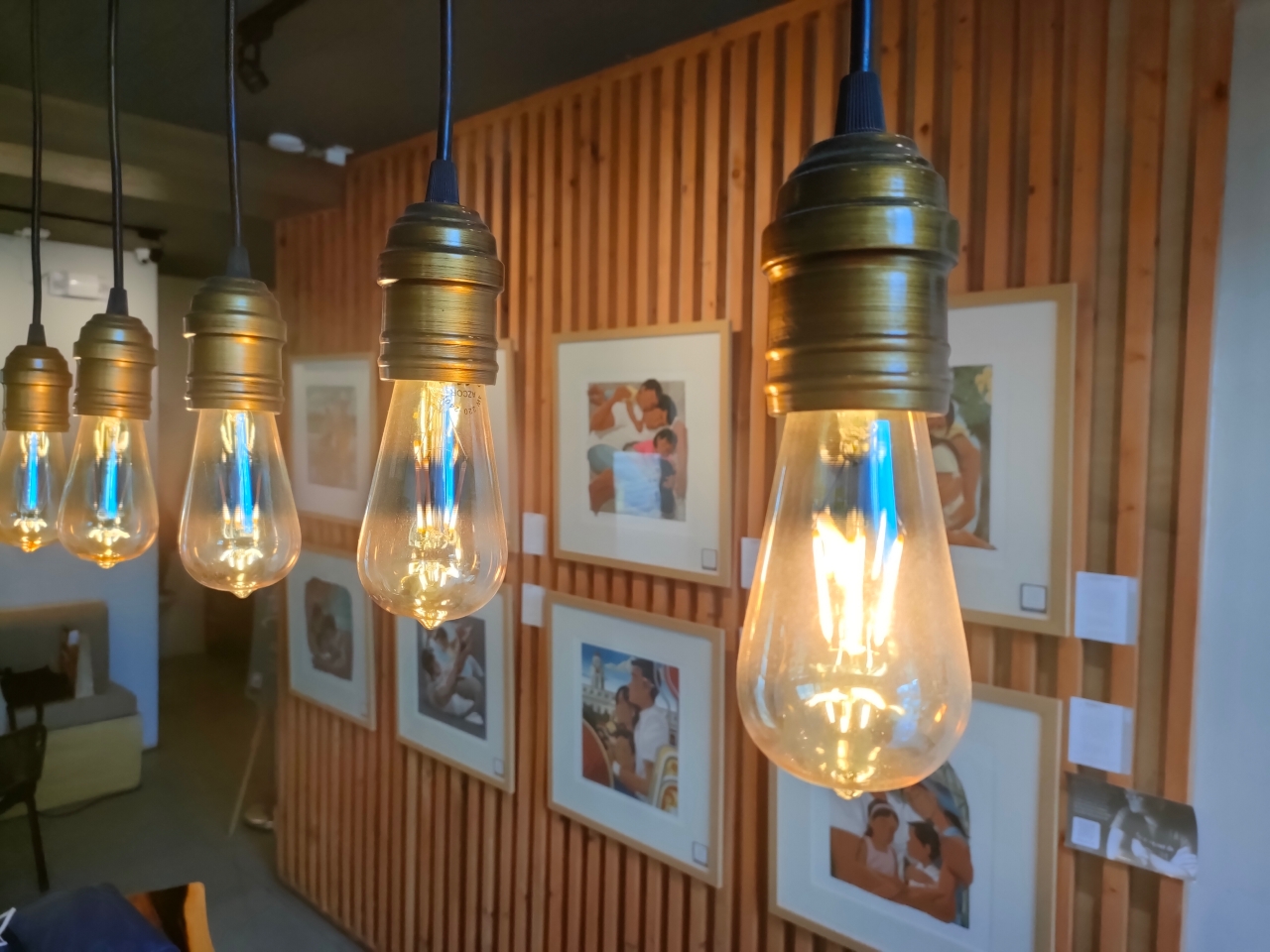 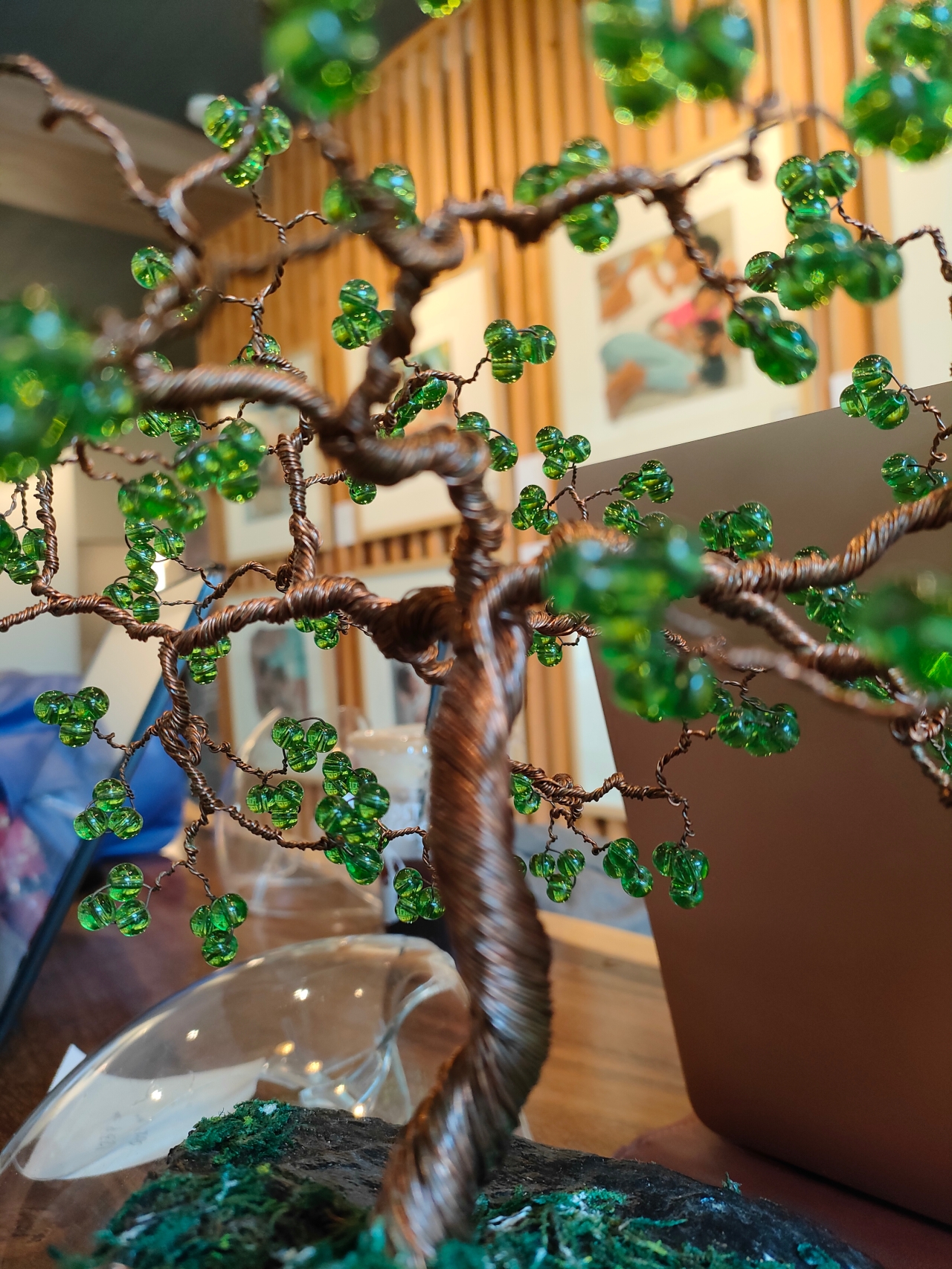 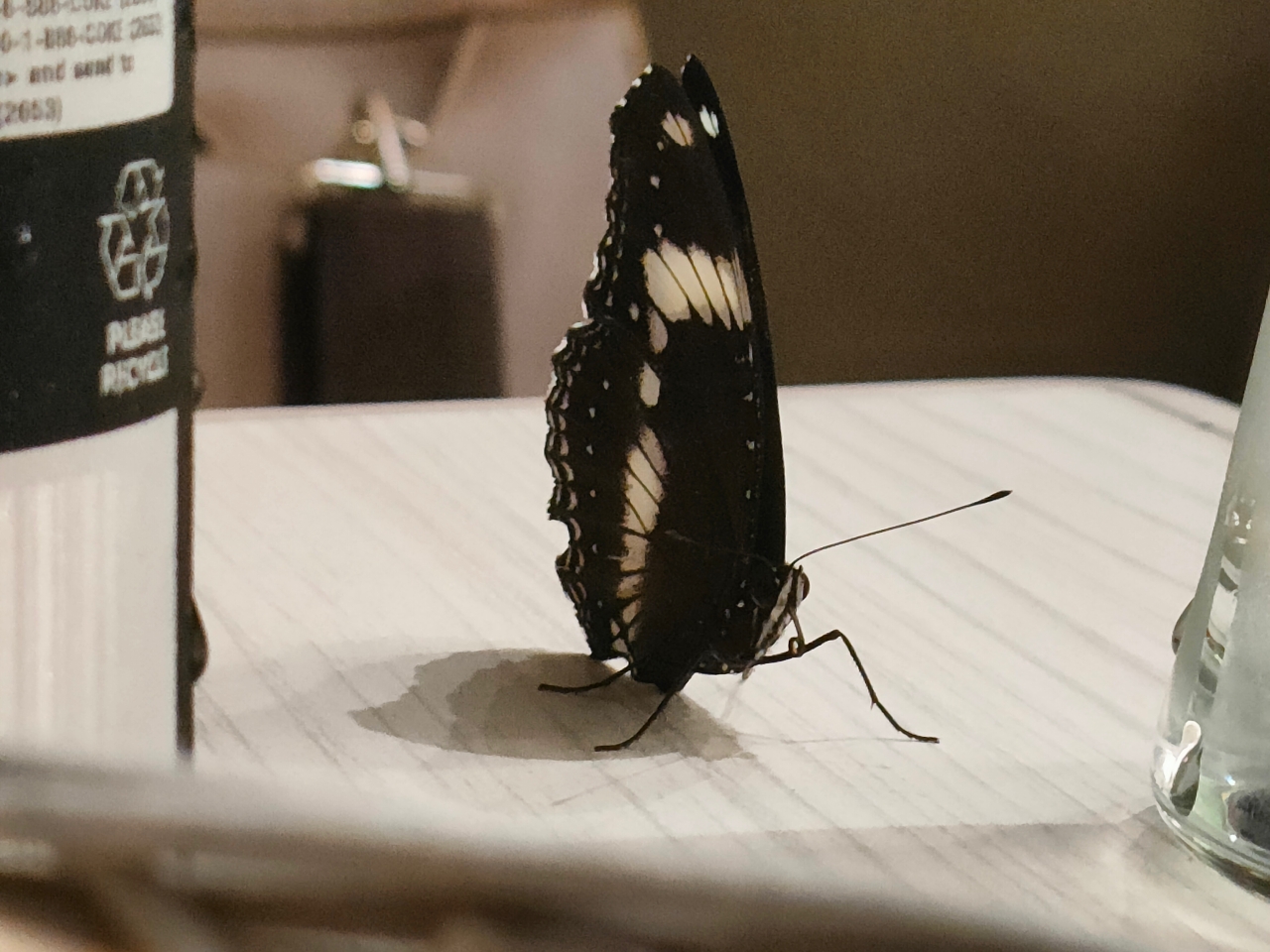 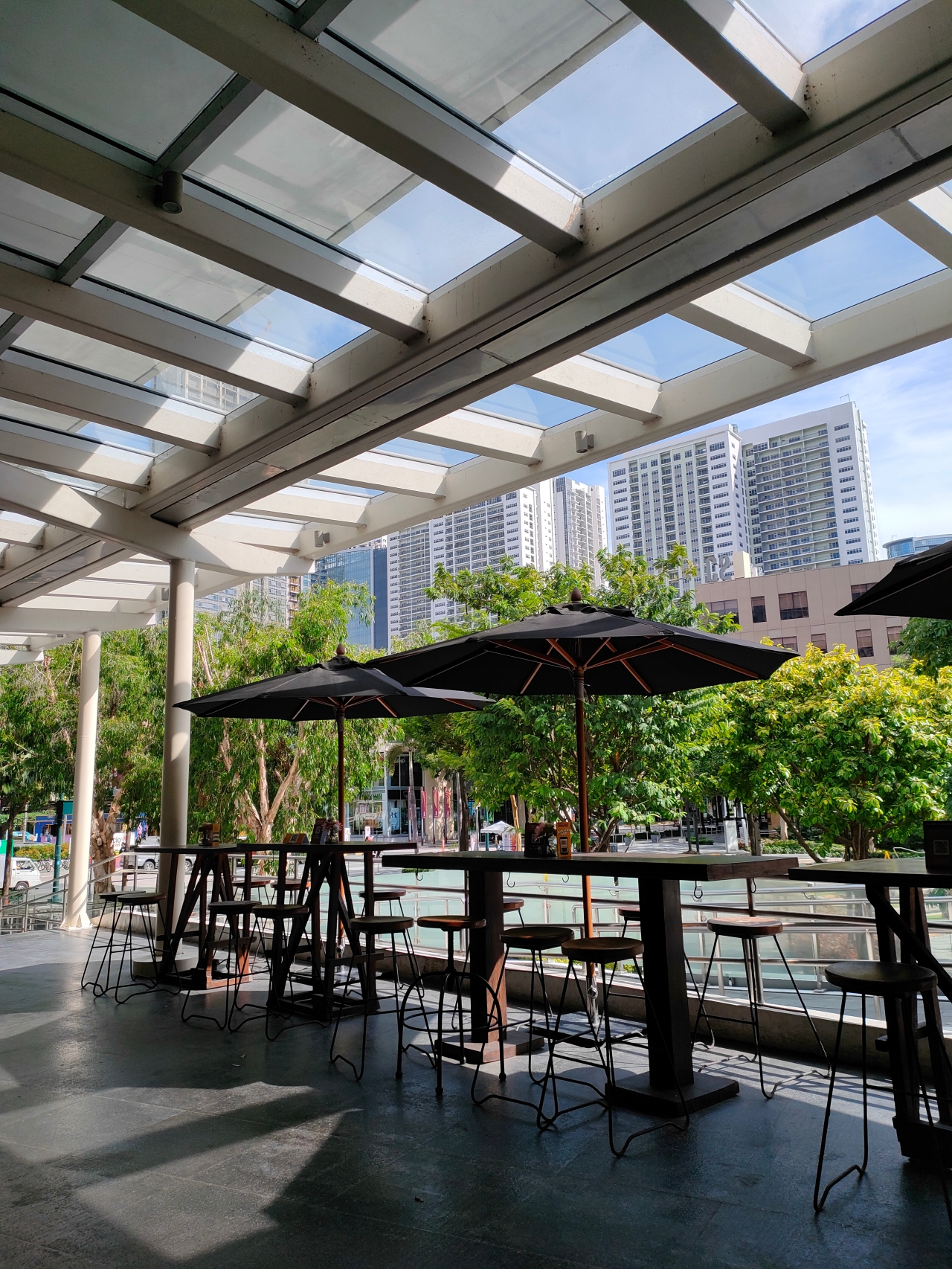 I don’t really have much to say in this section. I’m not the type who over analyzes the photo output. What I do know is that you’ll have a generally pleasant time snapping with the realme GT Master Edition.

It captures a good amount of detail, the image processing isn’t too aggressive, and the zoom performed so much better than I expected. Just be wary about using certain features in low light situations. For example, Portrait mode, that’s best when you have plenty of natural light.

If realme is selling you on this phone’s sheer photography prowess, it has every right to do so. It delivers as advertised. 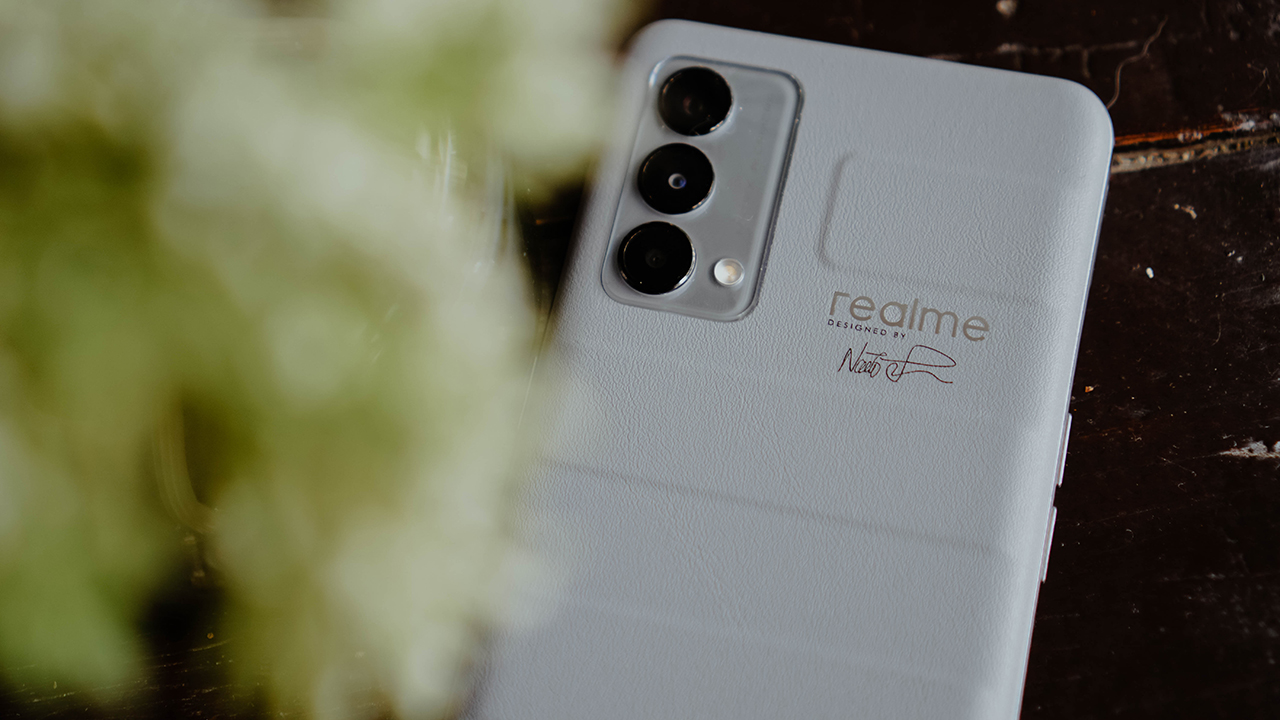 I wouldn’t call the realme GT Master Edition a disruptor, but it’s certainly one of the best devices in this category. My only real gripe is the bloatware but other than that, it’s pretty excellent considering price and performance.

realme could have taken a few steps to make sure this is a 100 percent easy recommendation. But even as it is now, it’s still a product worth your consideration if you’re in the market for a capable smartphone.

realme GT Master Edition: Price and availability in the Philippines

realme is calling this a ‘disruptor’

realme is bringing a premium concave vegan leather touch to the midrange segment with the realme GT Master Edition.

We’re sure you’re curious about the specs so here they are:

realme gave significant attention to the back design having Japanese designer Naoto Fukasawa lead the effort. His signature is also present at the back of the phone. Talking about the design, it’s inspired by the look of a suitcase to induce thoughts of travel. We’ve gone in detail how we feel about this approach in the Unboxing and First Impressions article so check that out.

In fact, that should cover most of what you need to know. That includes our quick thoughts on the device. But TLDR: Feels great, a little thin, realme UI has bloatware, but device is pretty good overall. Watch out for the review.

So here’s what you came here for. Pricing and availability of the realme GT Master Edition: 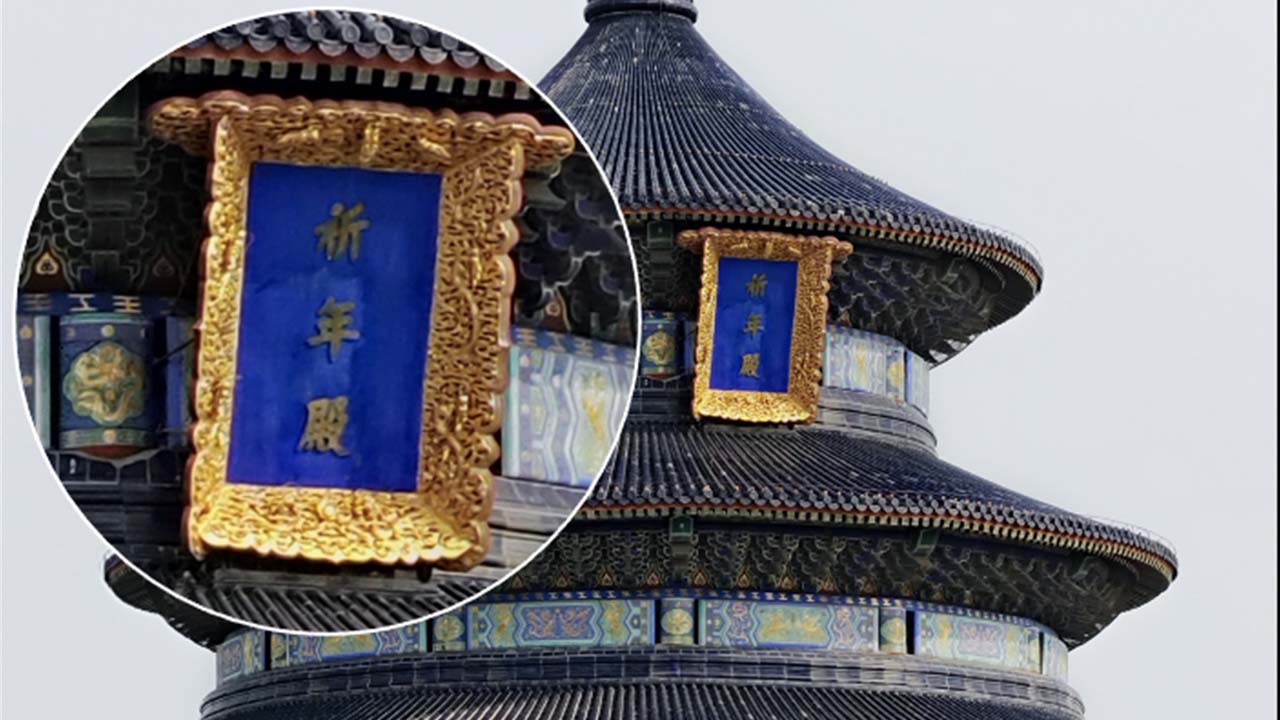 Last month, Honor launched the Magic3 flagship series. Besides offering industry-leading hardware, the flagship series delivers the best that smartphone photography can offer. Of course, as any smartphone photographer can tell, packing in the largest specs only spells half od the equation. Smartphone makers need to leverage the technology too. To unveil most of the mystery, Honor has explained how the Magic3’s camera system rises above the rest.

Despite the smartphone’s lithe frame, Honor leverages both AI and hardware to deliver the best images possible. Honor’s Ultra Fusion Quad-Camera Photography system more intelligently uses the different cameras simultaneously to find the best combination depending on the situation.

More specifically, the camera system uses both color and monochrome cameras. The color camera, as the name suggests, keeps the color accuracy on point. Meanwhile, the monochrome cameras handle texture and detail.

Also, despite using multiple cameras at once, Honor’s AI technology can accurately stitch together images, resulting in sharper details without the blur. Likewise, the technology fuses both the main sensor and the telephoto lens to capture accurate long-range shots from a distance.

When it launched, the Magic3 series was one of the first flagships to feature Snapdragon 888 Plus. It’s natural that the flagship should come with a top-tier camera setup. And Honor has the tech to prove it.