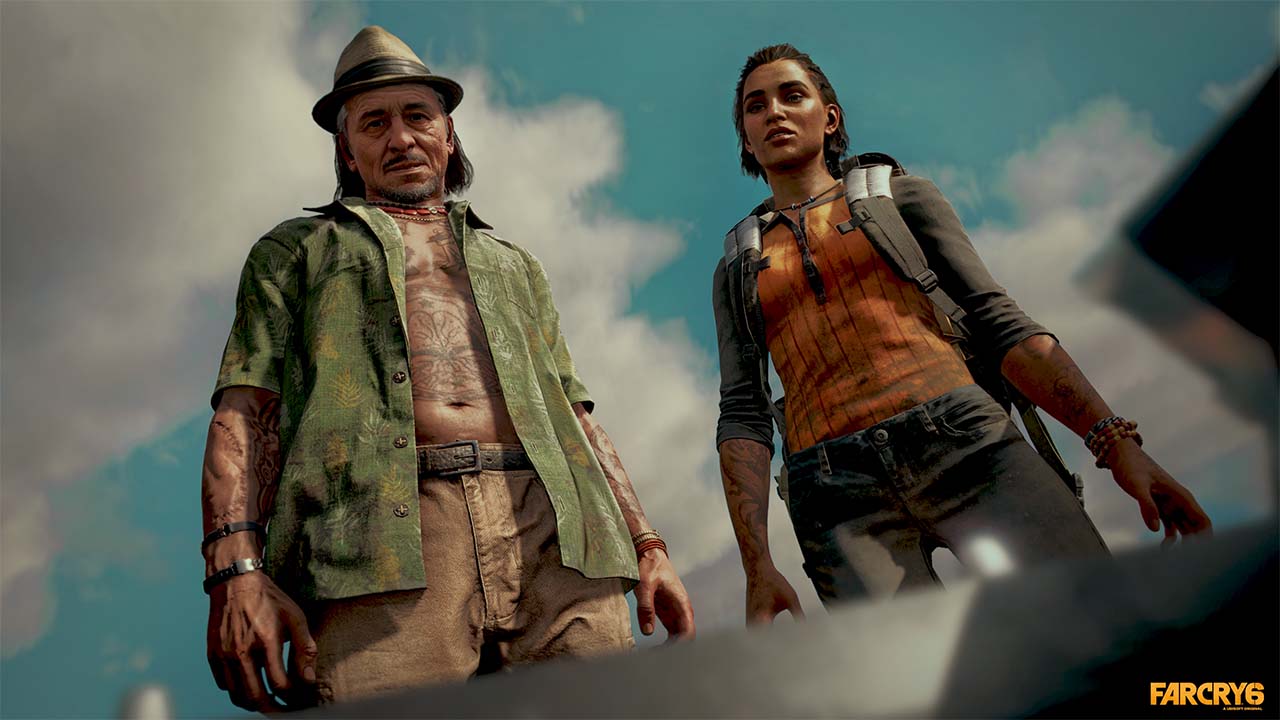 What do you get when you cross an evil dictator, a crate filled with guns, and a fighting rooster pumped with steroids? Far Cry 6 continues the long-running first-person RPG franchise from Ubisoft. Much like its predecessors, the sixth major entry in the series brings players to an isolated, almost-dystopic country in a quest for survival and (eventually) dominance.

In Far Cry 6, players choose between a male or a female Dani Rojas. The newly minted guerilla then fights against Yara’s cruel dictatorship ruled by Anton Castillo and his son Diego. Dani will have the help of a dynamic cast of characters from the Libertad revolution and a quirky set of pets including a gator, a handicapped dog, and the aforementioned rooster. 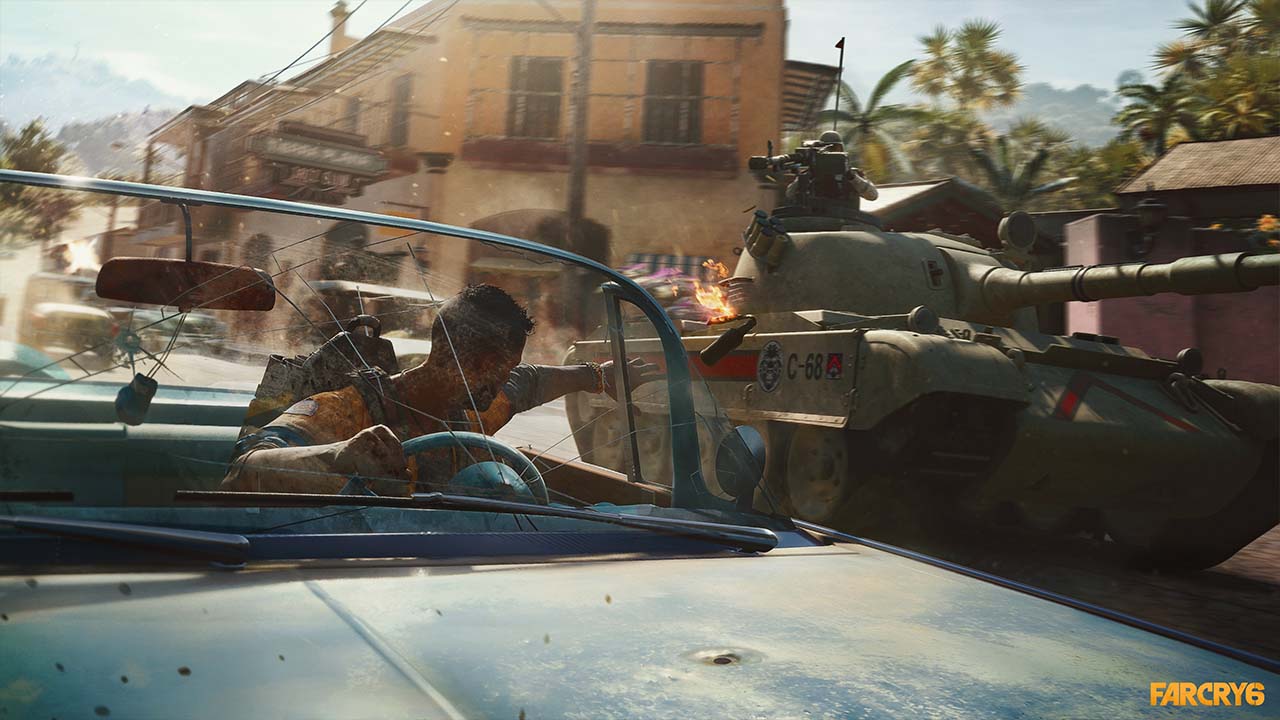 Before gameplay even starts, one of the most notable aspects of Far Cry 6 is its picturesque graphics. The game fully makes use of current-gen technology to deliver the best-looking island the series has ever seen. Even without the optional HD textures pack, details are crystal clear, colors pop, and characters are rendered perfectly without going into uncanny valley territory.

Further, the game comes with AMD FidelityFX Super Resolution which can produce high-resolution frames even with low-resolution inputs. It gives you an option to prioritize framerate or performance without murdering your entire rig. 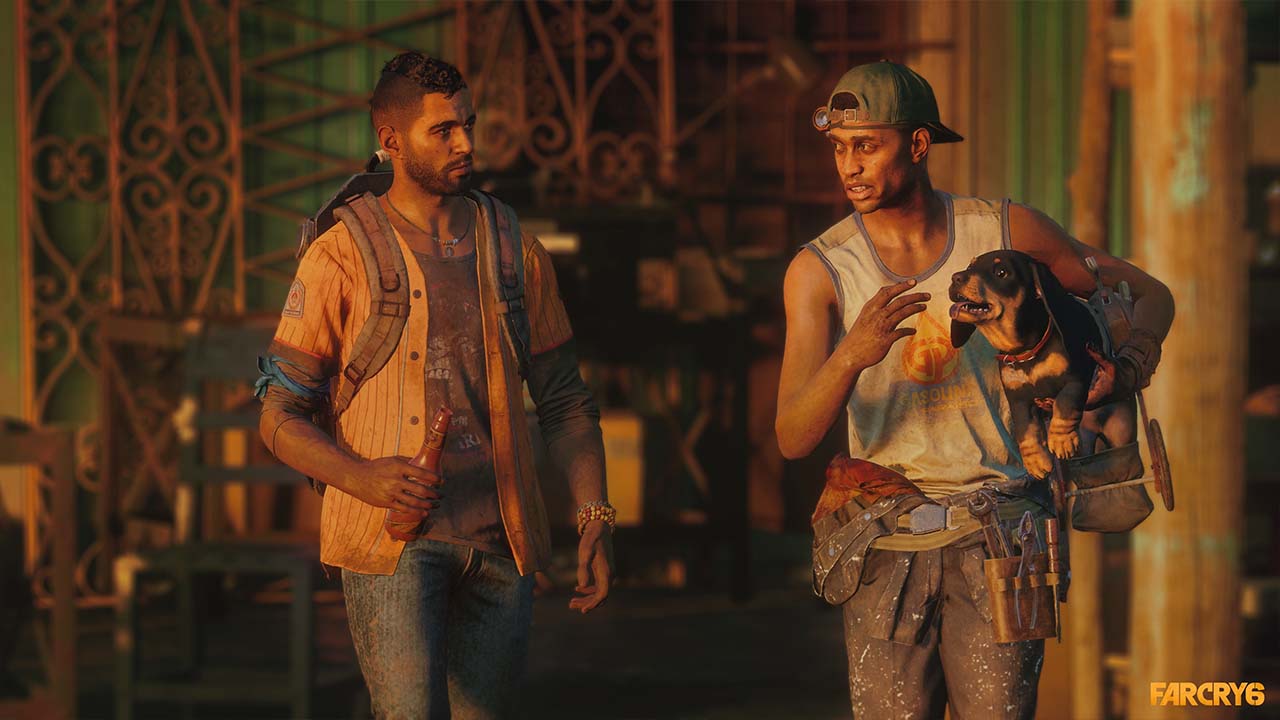 Gameplay: Best of all worlds

Six entries into the series, Far Cry 6 already knows which gameplay elements to focus on. The game takes the best features from the third through the fifth entries: the survivalist jungle setting of Far Cry 3, the vertical traversal of Far Cry 4, and the micro-territorial format of Far Cry 5.

Years ago, Far Cry 3 skyrocketed the franchise as one of Ubisoft’s flagship series. The game was a difficult but manageable jungle survival simulator with ferocious animals and enemies. The sixth entry somewhat brings this back by sticking players into a harsh tropical island.

However, though enemies can still be difficult, the new game does lose a bit of its survival aspect. Animals aren’t as roaming, and hunting isn’t an absolute necessity anymore. That said, the reduced focus on survival can make the game more enjoyable and allows users to focus on other gameplay elements. And, considering that Dani already has a military background, it makes sense that it isn’t a survival game anymore.

Secondly, Far Cry 6 takes the vertical movement of Far Cry 4 and makes fun traversal and parkour puzzles for exploration. Getting around the game isn’t just through vehicles or running around the map. A lot of times, the best way to get from point A to point B (without fast travelling) is going through a large mountain. It involves grappling, finely timed jumps, and swings. Unlike a lot of games with that form of travel, air travel in Far Cry 6 — parachute, wingsuit, and vehicles — is easy to control. 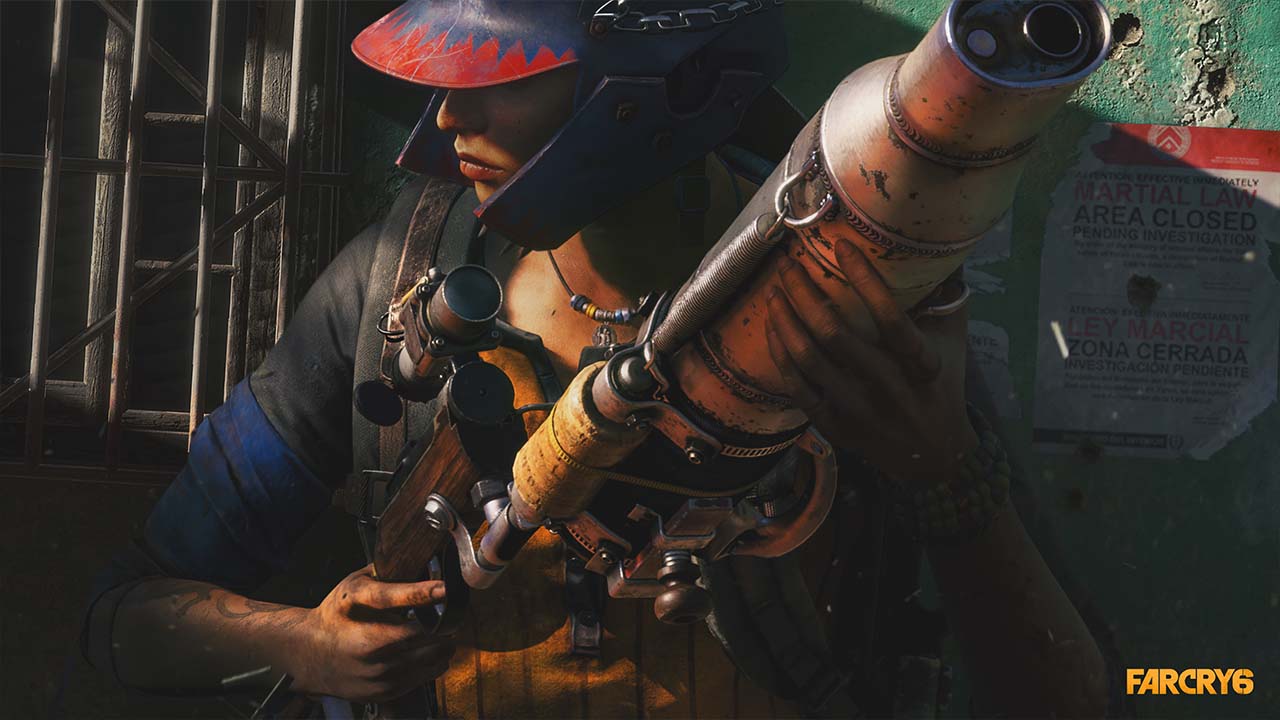 Finally, the game takes the territorial gameplay of Far Cry 5. Like the previous game, Far Cry 6’s map is divided into different sections: a tutorial island, a main hub, three different regions controlled by minor bosses, and a major boss region. However, unlike the previous games, the map isn’t a color-by-number collect-a-thon. Though the map is still littered with objectives, the goal isn’t necessarily to claim every region for the revolution. Enemies still spawn regularly even if you’ve captured an entire region.

Amid the game’s similarities to its predecessors, Far Cry 6 still has a lot of exclusive tricks up its sleeve. For one, the RPG-style levelling system is gone. Though there’s still a way to rank up through the revolution, most of the perks are now obtained through the crafting system. The decision may or may not hold everyone’s attention, especially those looking for a more traditional RPG experience, but it’s quite an adventure crafting the best gear for your guerilla.

Plus, the game offers a way to manage the revolution from camp. There’s a choose-your-own-adventure style map wherein you send teams on raids with sometimes-humorous prompts. There’s a co-op area wherein you (and an optional partner) can raid smaller maps not found in the main game.

All in all, Far Cry 6 offers a familiar experience for long-time fans while keeping things fresh for both new and old players. 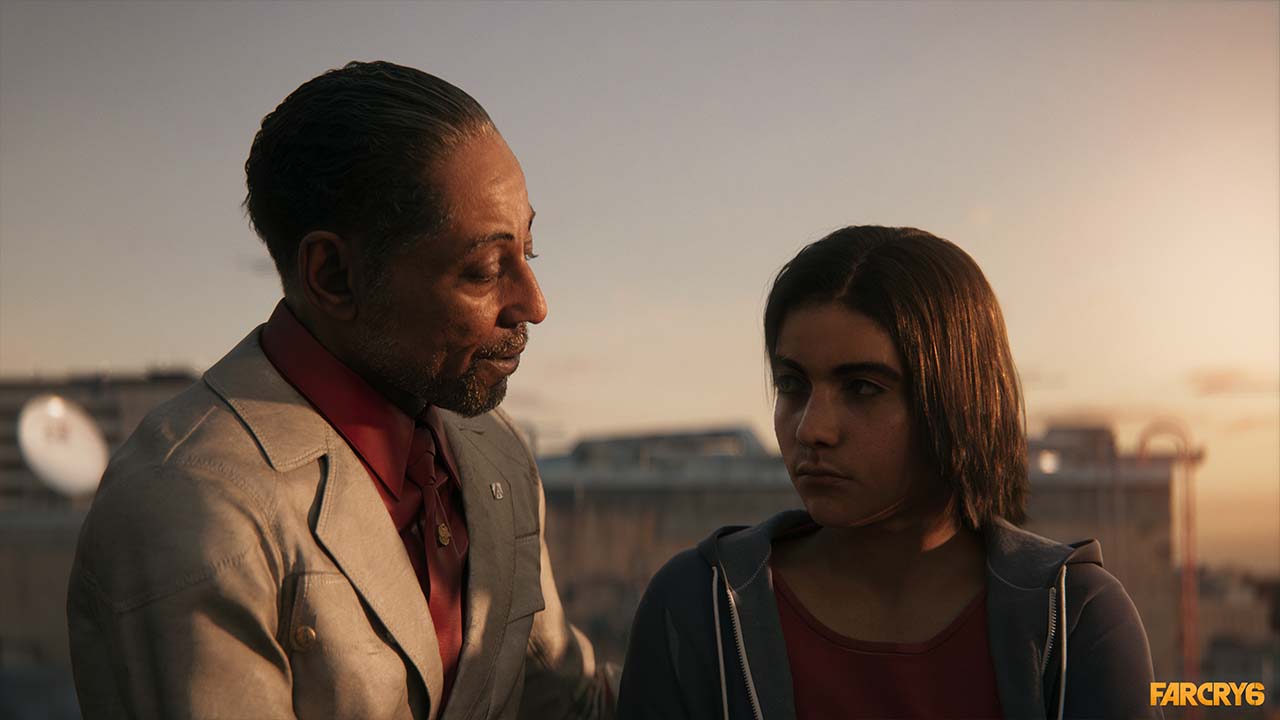 From the outset, Far Cry 6 exudes a caliber of writing ahead of those in Ubisoft’s standard fare. The cinematic intro, which plays every time you launch the game, looks like it came from a Netflix show, and it hints at what you’re in for.

Yara’s story doesn’t pull a lot of punches. Giancarlo Esposito, who plays Anton Castillo, carries the entire game on his back. Reminiscent of Far Cry 3’s charismatic Vaas Montenegro, Castillo is a terrifying villain to go up against. He’s ruthless, unyielding, and would mess up even his allies just to maintain his grip over Yara.

Meanwhile, opposite Castillo is a cast of dynamic, funny, and strong side characters helping you throughout the revolution. In fact, each region tells its own story. While one region might focus on Viviro (Yara’s alleged cure for cancer), another will center around Yara’s navy. Each region also has its own smaller guerilla movement. And rather than being subservient to the greater Libertad revolution, they have their own missions, wants, and needs. It plays off like three short stories connected only loosely by a grander narrative.

Unfortunately, while a lot can be said about Yara as a whole, it’s hard to see Dani Rojas as anything other than a playable character. Far Cry 6 brings back a named protagonist, unlike the bland and silent one from Far Cry 5. However, it doesn’t dwell much on Dani’s story. Dani does get a moment of pathos at the beginning of the game, but they hinge on this one moment for the entire adventure. They never quite grow into their own character after the fact, unlike 3’s Jason Brody or 4’s Ajay Ghale. Though Dani’s voiced lines were a treat to hear, Far Cry 6’s story was more about Clara Garcia’s Libertad versus Anton Castillo’s Yara. Though it’s not exactly a fault on its own, it might put off those looking for a purely protagonist-driven story. 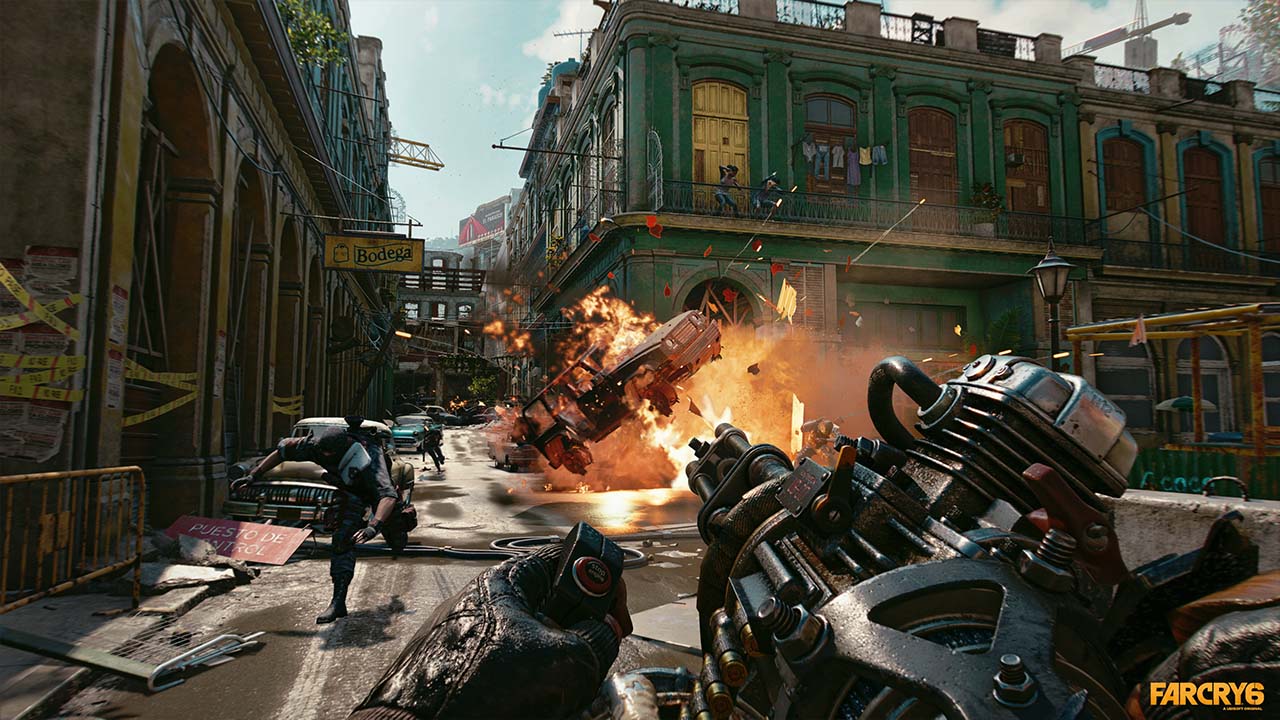 Should you play it?

Issues with Dani aside, Far Cry 6 remains an enjoyable romp through the jungles and streets of Yara. Gamers might balk at the game’s more unconventional decisions, but one thing’s for sure: taking down a government led by Giancarlo Esposito makes for a fun time.