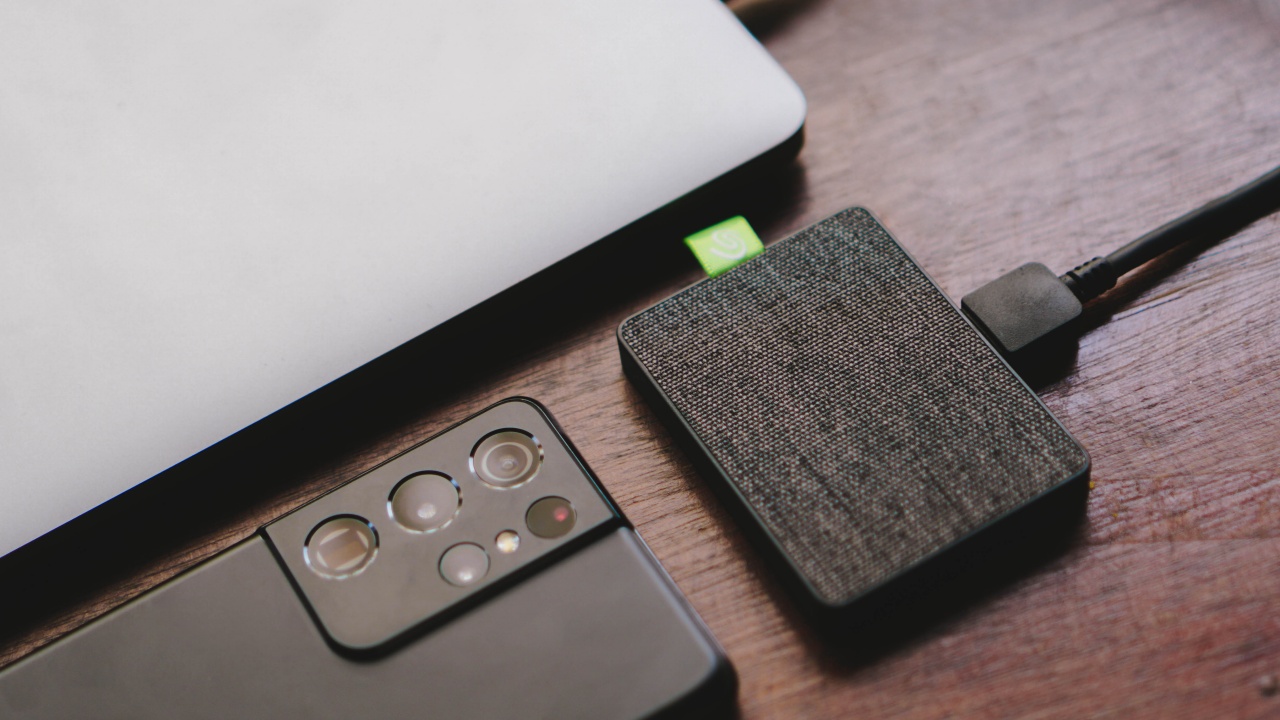 If you’ve been fond of reading our posts, we already did an article that discusses the differences of SSDs (Solid State Drives) against regular HDDs (Hard Disk Drives). I even made a full article on how upgrading to an SSD vastly improved the performance of an old and sluggish laptop.

In this article, it’s all about this new storage device that caters not only to me as a creative, but also to every other professional who always relies on large external drives for work on-the-go. Wrote five reasons why I find the Seagate Ultra Touch SSD one of the best (if not the best) external storage device you can use for work and play.

Unlike other external HDDs that are mostly made up of plastic, Seagate’s Ultra Touch SSD is made from textile that resembles a woven fabric, making it look and feel sleek. 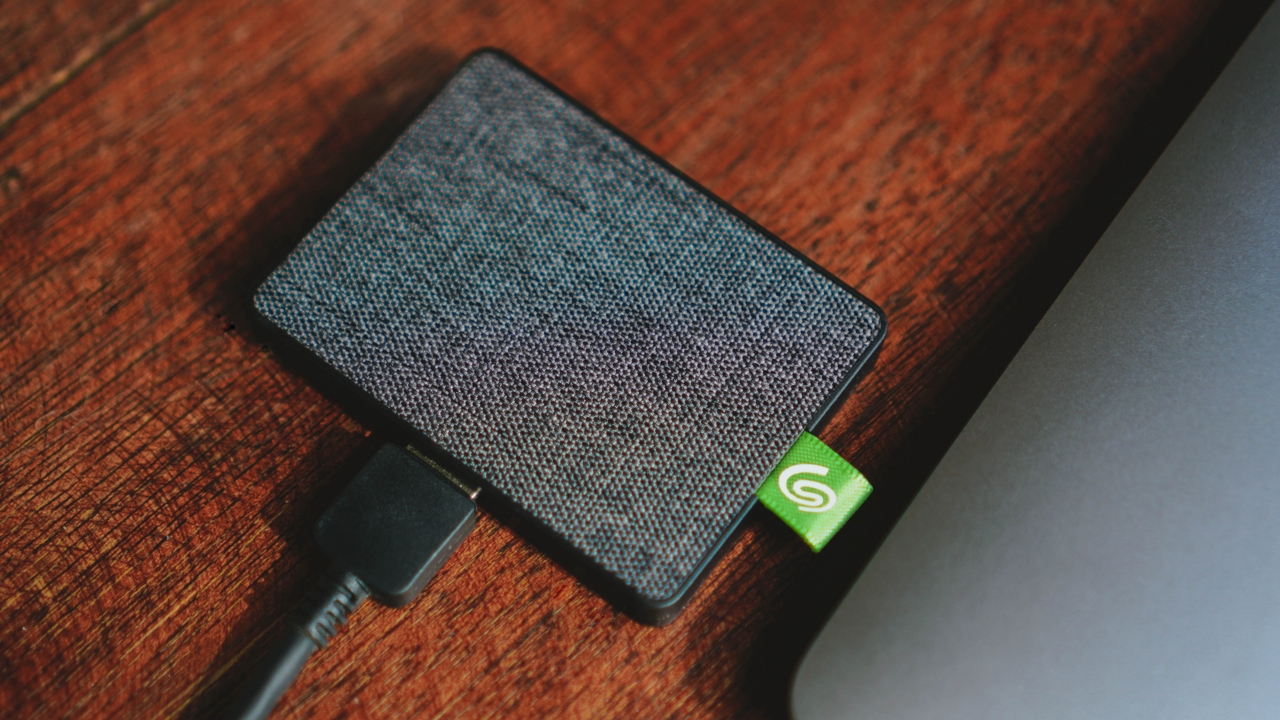 It comes in two basic colors: White and Black. Obviously, I got the black one. But if neither is your cup of tea, there are special Camo and Sam Larson editions for the One Touch version — especially if you prefer louder designs over the minimal-looking. Regardless of what color you choose, they all look modern and barely looks like a typical external storage device. 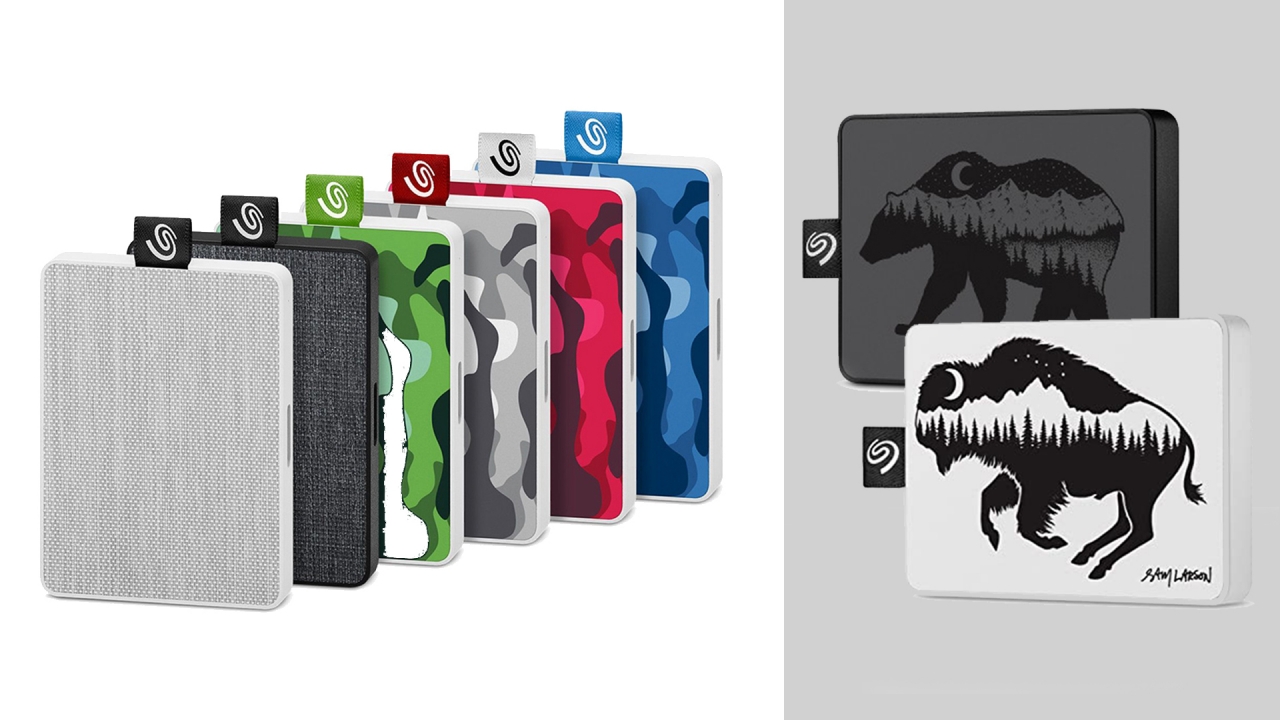 Seagate’s Ultra Touch SSD thinnest point is just at 10mm. That’s slimmer than most smartphones today. When held, you’ll barely notice it’s there because it weighs exactly at 0.065 kilograms or just 65 grams! If you come to think of it, conventional hard disk drives weigh around 170 to 220 grams. It may not sound a lot, but you’ll definitely feel the heft if you hold them with your hands.

Due to the lack of mechanical parts such as large spinning disks, this makes Seagate’s Ultra Touch SSD ultra lightweight and compact — especially that it has immovable parts (chips) inside it. While I don’t recommend to just put this storage device inside your jeans’ pockets as it’s not totally built for butt pressure, this external SSD is greatly pocketable. 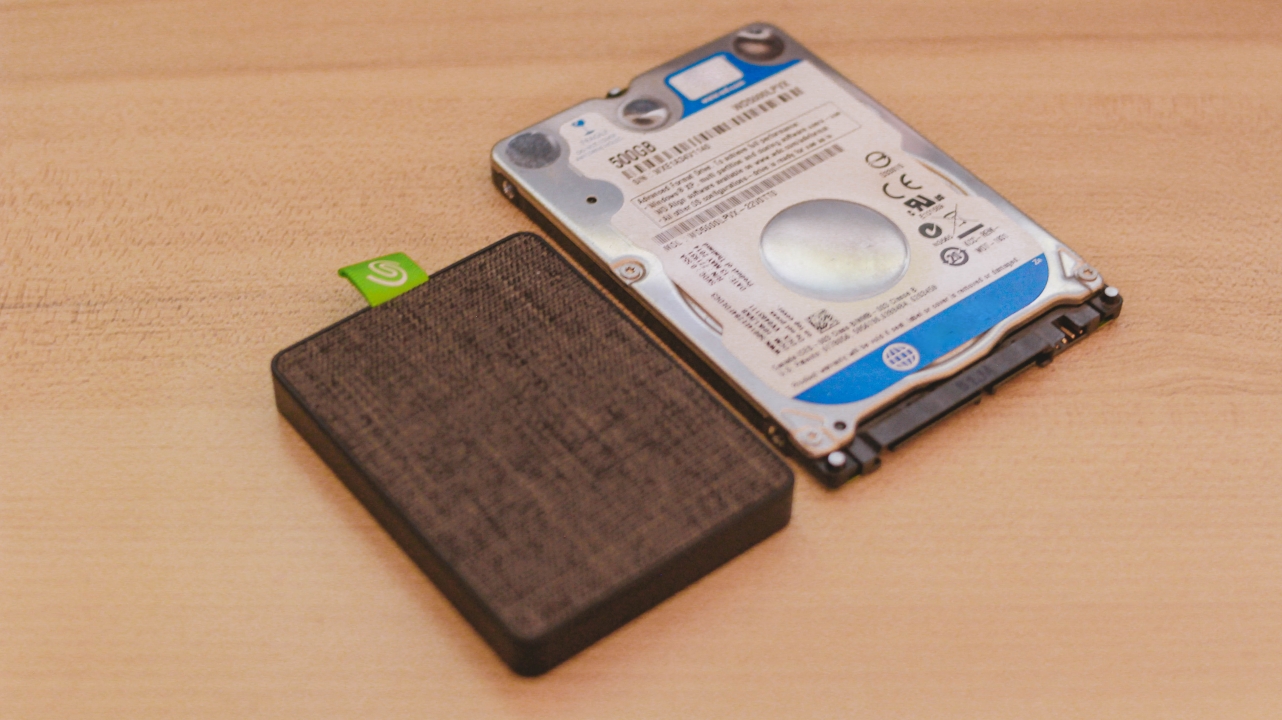 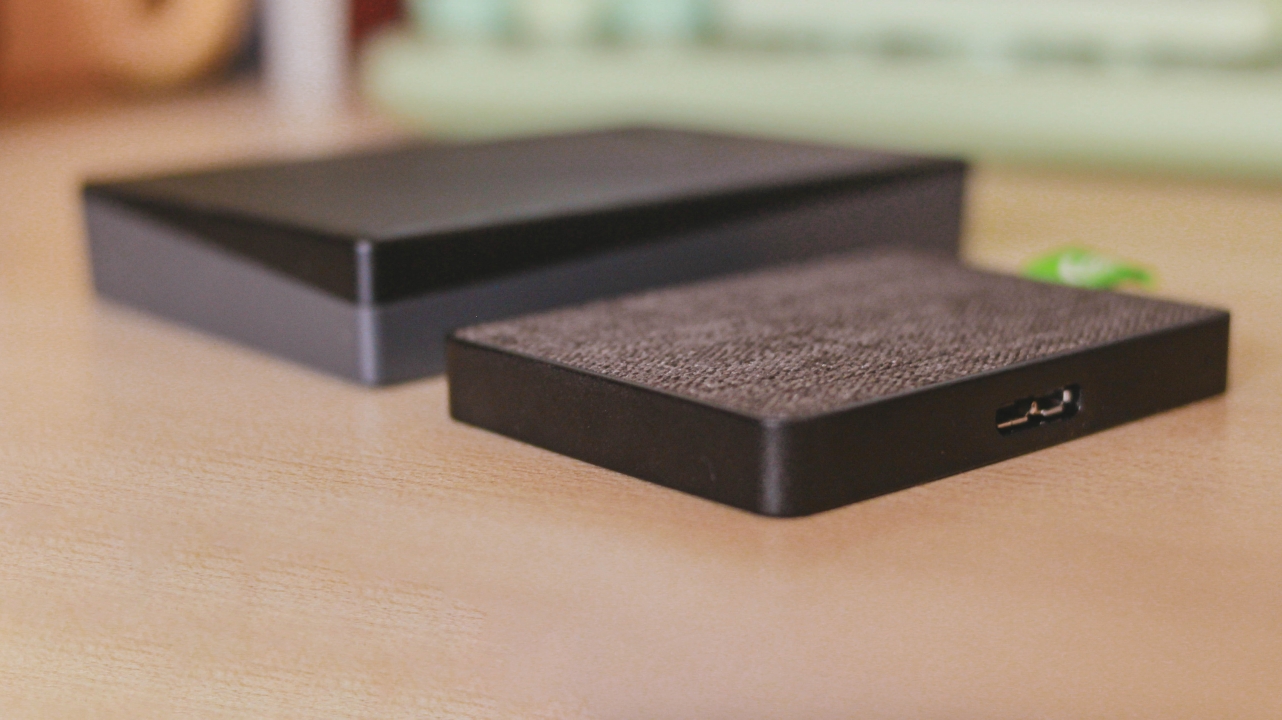 For another comparison, I also have another 2TB external HDD that’s as thicc as the previously mentioned hard drive. 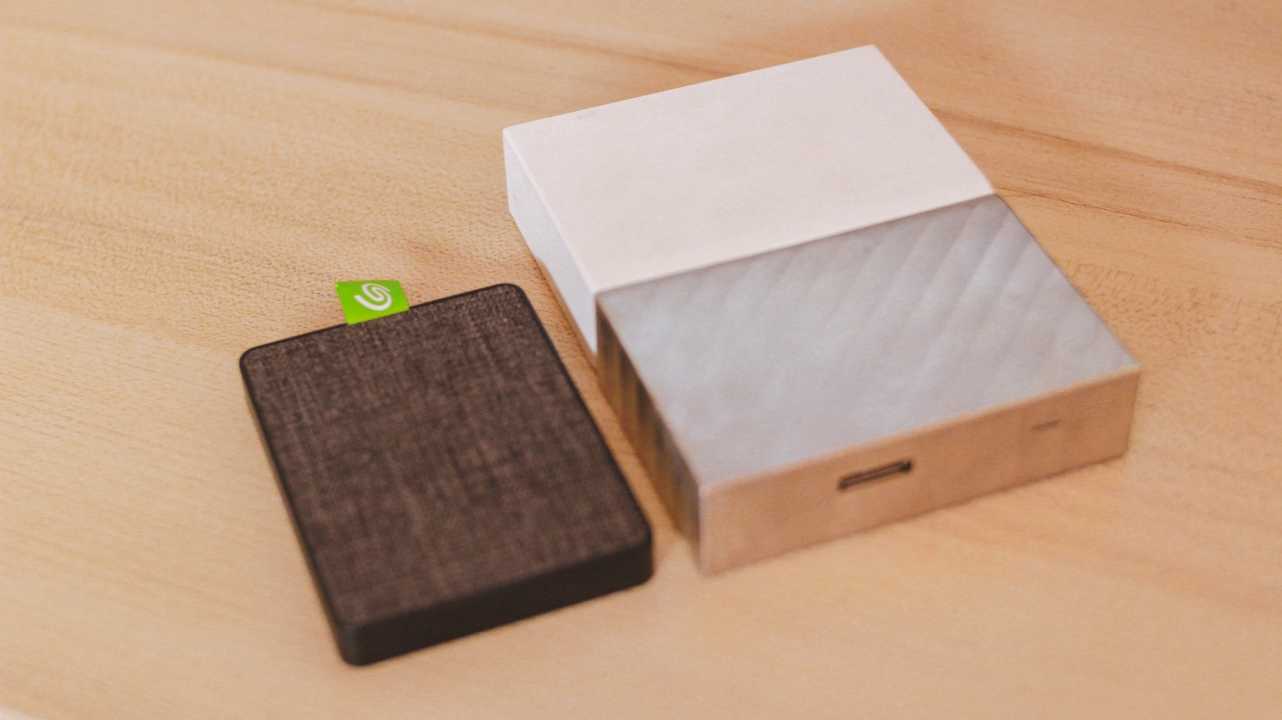 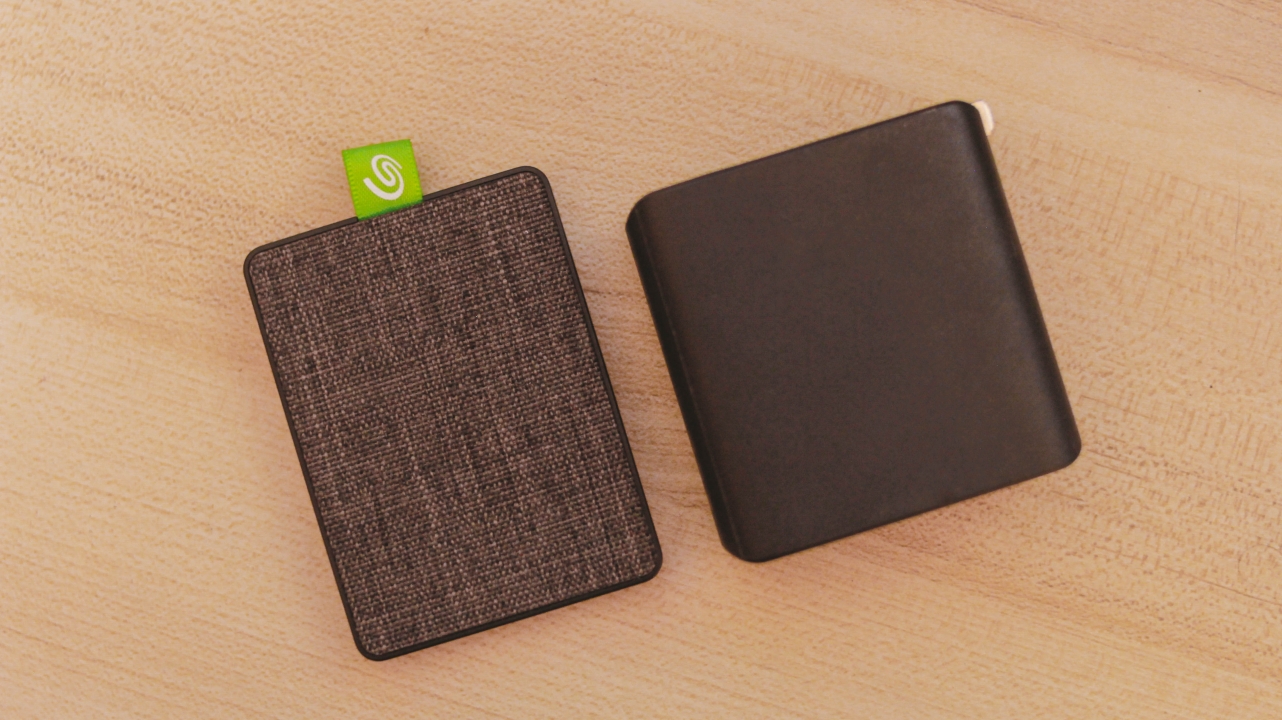 and quite smaller than my debit card. 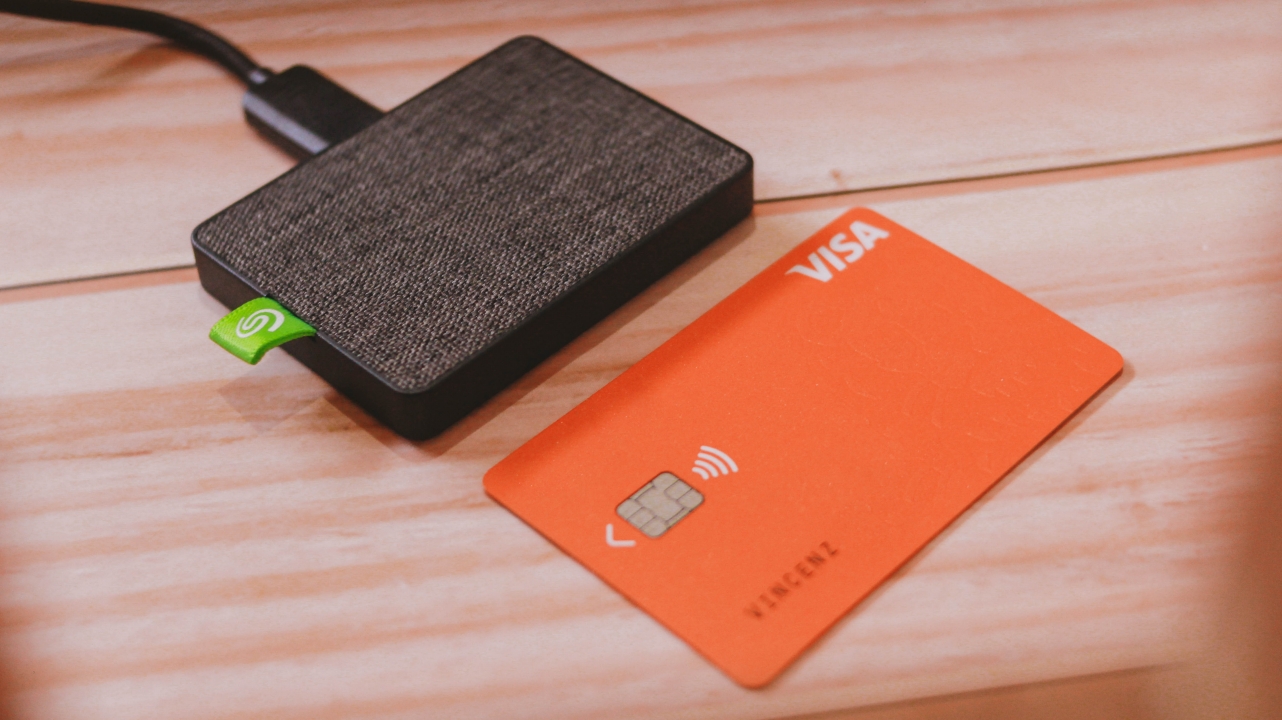 Finally, here’s how it looks like versus three different coins from Singapore, Taiwan, and the Philippines. 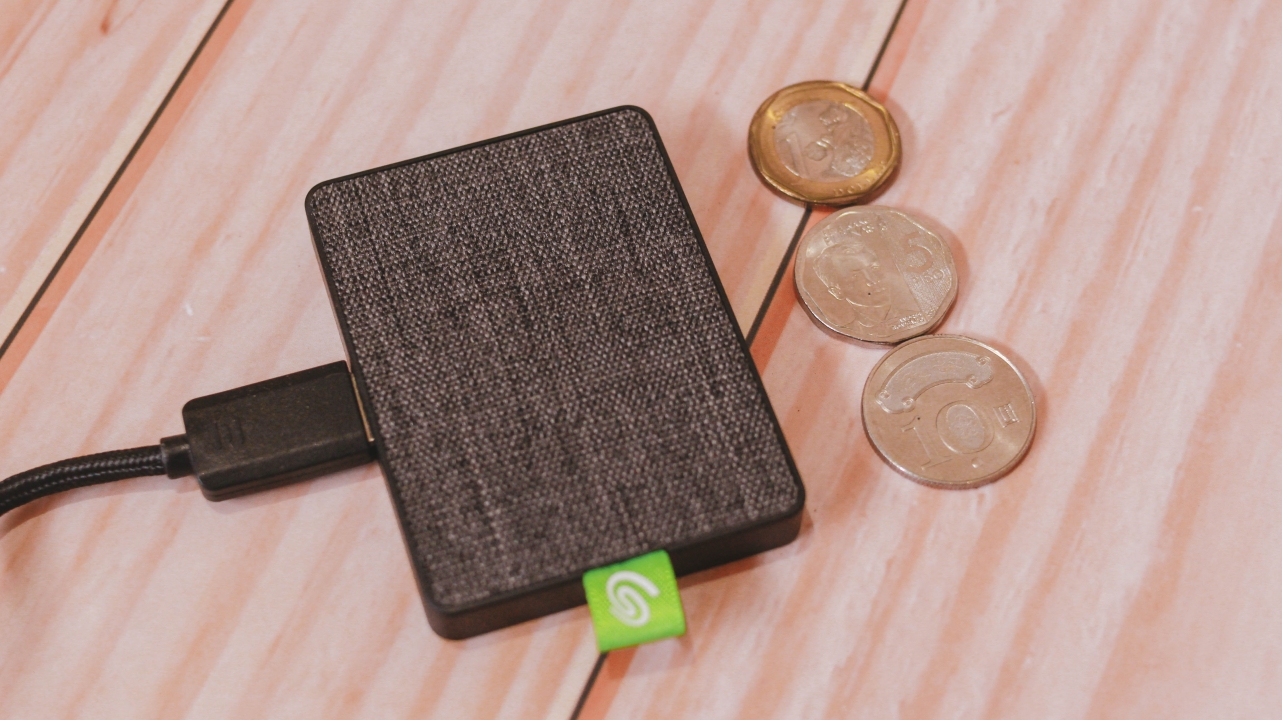 On paper, Seagate is confident that the Ultra Touch SSD will reach up to 400MB/s of write speed. True to its words, it’s able to give me more than 300MB/s under a huge stress test. Others might say it doesn’t stick to its promise but devices like this don’t really reach the maximum limit — just like how it works in cars, other devices, and even human beings with utmost limits. 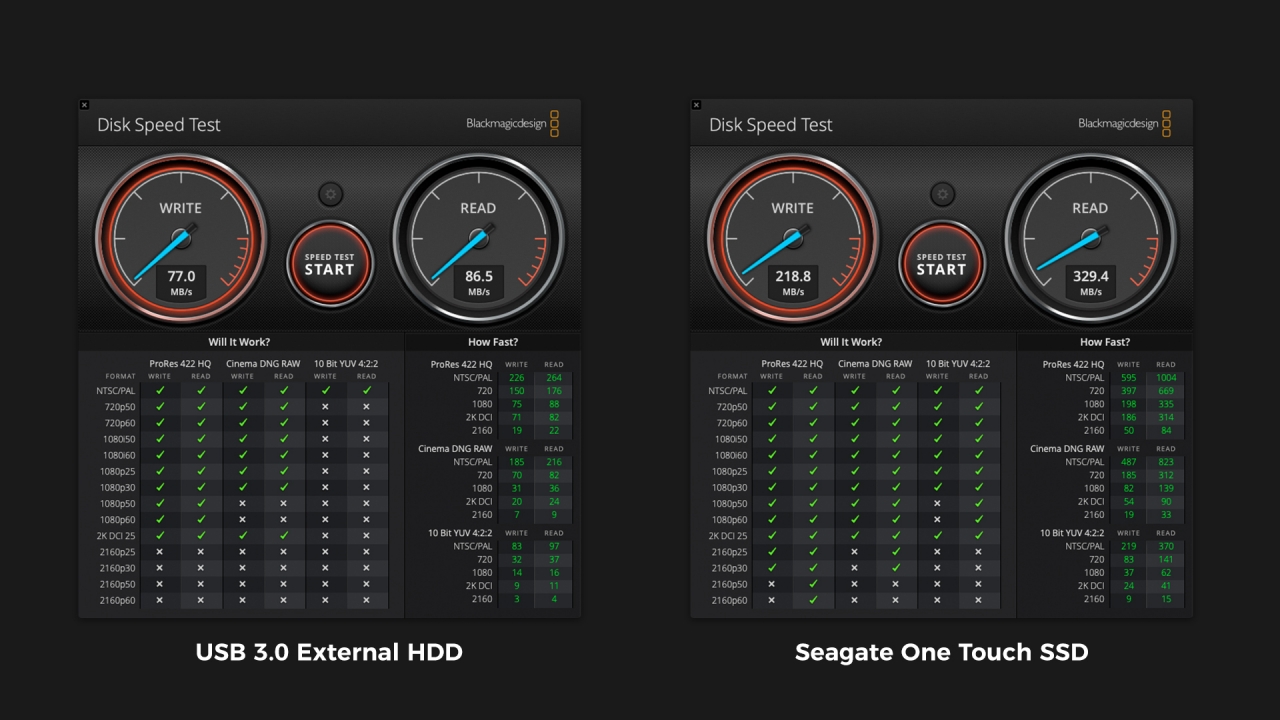 The image above shows a huge speed gap between my external HDD compared to Seagate’s SSD. It may not matter to most users, but for video editors and gamers, fast read and write speeds are everything.

4K videos are harder to read on slower disk drives. No wonder why a video editor app is sluggish even if your laptop/rig has all the best chipset and memory on board. Investing on a fast SSD like the Ultra Touch SSD is a great solution for that.

Even gamers need fast drivers since most games run on 2K/4K resolution with maximum settings possible. The external SSD will not only load games faster, it can also be opened in other laptops as long as you figured out how to correctly install games in external drives.

I also tried comparing disk speeds versus two MacBook Pros with an internal, non-removable SSD. While they’re pretty far from what Seagate can offer, it’s still a huge feat considering an external SSD can achieve great feats of read and write speeds that regular disk drives can’t even do.

Out of the box, the Seagate Ultra Touch SSD is already formatted to exFAT. This means you don’t have to worry about storage platform incompatibilities. Usually, external disk drives come in NTFS format — which is limited to Windows systems. Other drives are specified for Mac. Thus, the Mac OS Extended format. 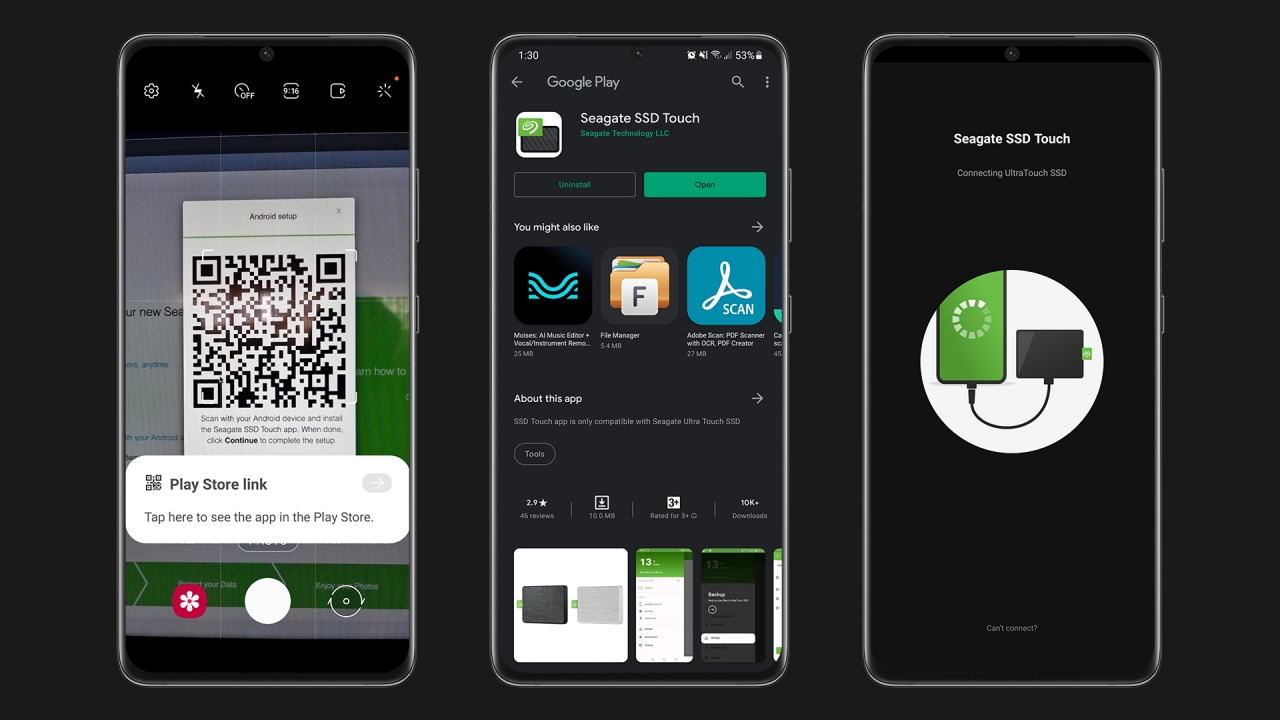 Whether that may be Windows, macOS, Linux, a smart/Android TV, or even an Android smartphone, the Seagate Ultra Touch SSD will work wonders since exFAT can be read by most devices. Such file format is the most accessible across all platforms whether that is for reading or writing files.

Upon my usage, I tested it with the Galaxy S21 Ultra as it successfully detected the drive and was able to show its contents through Seagate’s SSD Touch app. File Manager works as well for copying and pasting several data. As long as your device supports USB On-The-Go, the portable drive would actually work. 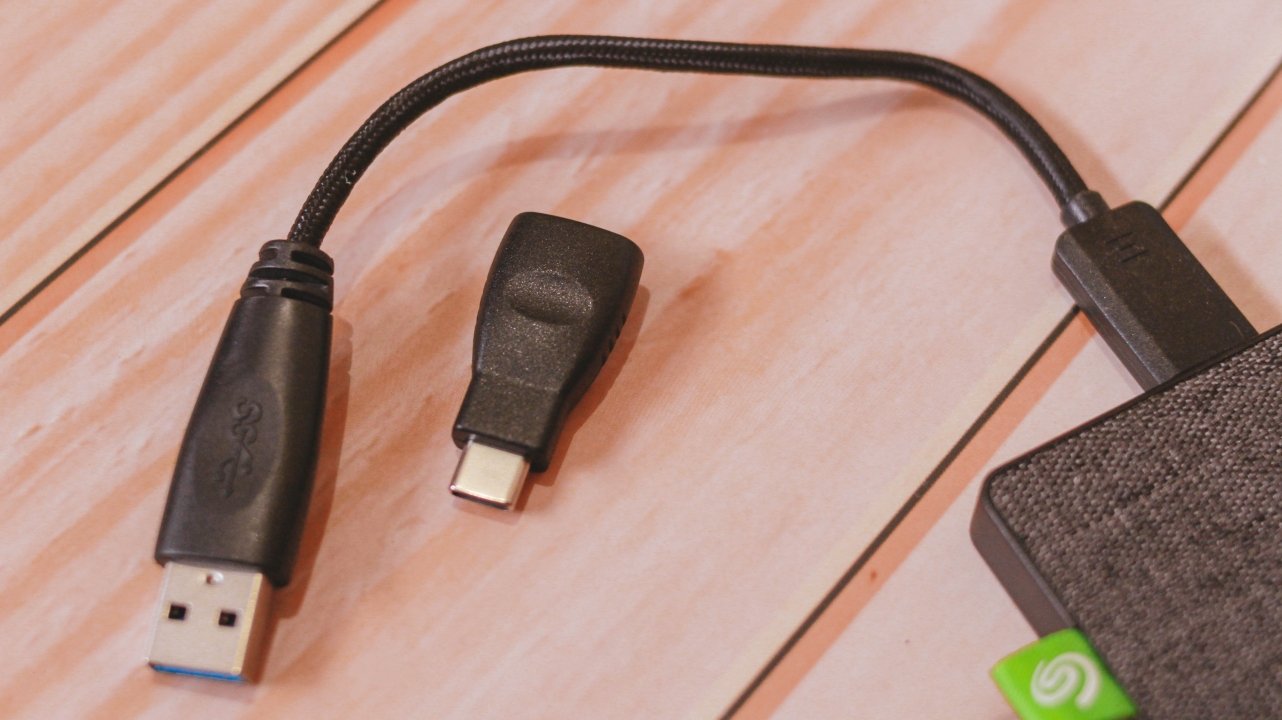 Other than being available to almost every device, Seagate made sure that it’s safe for future use with the inclusion of a braided USB-A cable plus a USB-A to USB-C adapter. It’s “future-proof” in a sense that most upcoming devices will be shipped with USB-C anyway. While there’s still the USB-A plug for backwards compatibility with older machines. 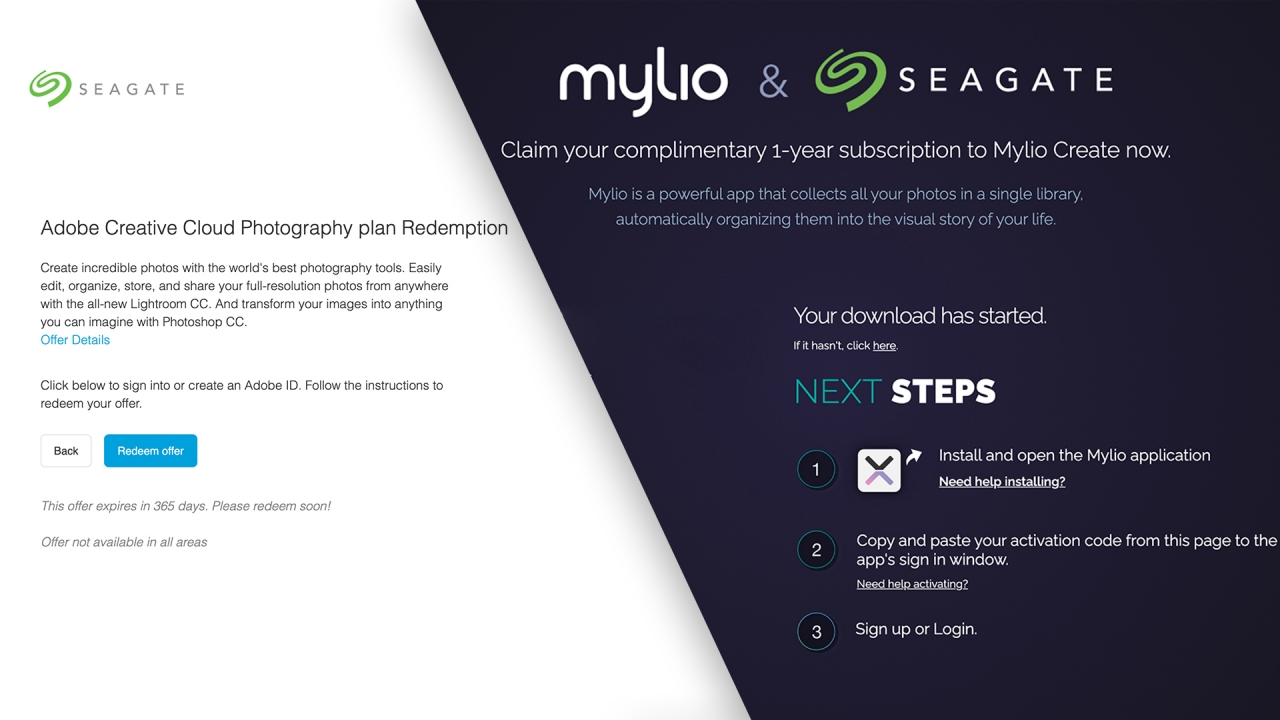 Upon any purchase of Seagate’s Ultra Touch SSD (or even HDD), you’ll get free limited subscriptions with Mylio Create for one year. Mylio Create is an app that stores all your photos in one online library. Their system also organizes your photos depending on their visual story.

There’s even the free Adobe Creative Cloud Photography plan (Photoshop and Lightroom) for two (2) months. If you’ll try to list it down, that’s a great saving especially if your a creative or a content creator who relies on such apps. Adobe’s Creative Cloud plan alone will cost you thousands of dollars. If you’re new to the scene, this is a great way for you to test out their products while trying to build your creative portfolio. 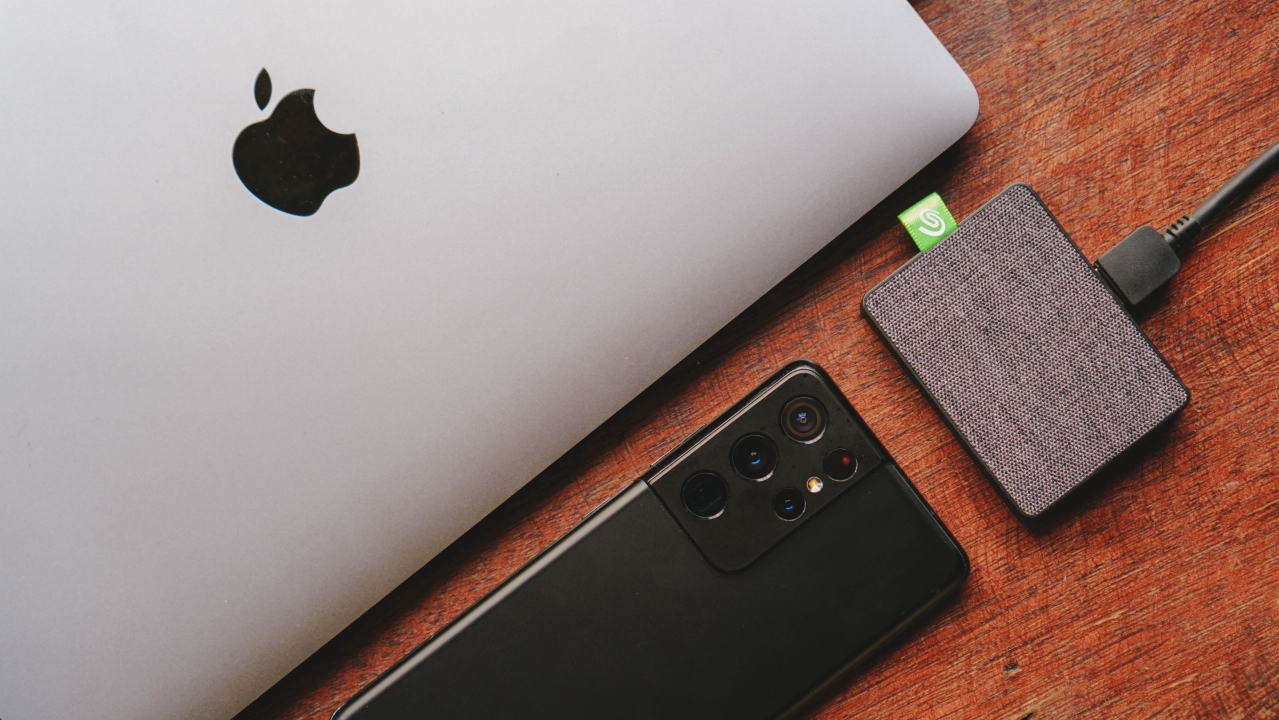 The Seagate Ultra Touch SSD is currently available in only two storage options: 500GB and 1TB. Pricing varies per region and is available through Shopee or Amazon at these links in Singapore, Malaysia, Thailand, Philippines, Indonesia, Vietnam, and India, but in the Philippines, the 500GB version is priced at PhP 7,999 while the 1TB version retails for PhP 9,999. While this portable storage device is pocketable, it’s definitely not pocket-friendly for most consumers.