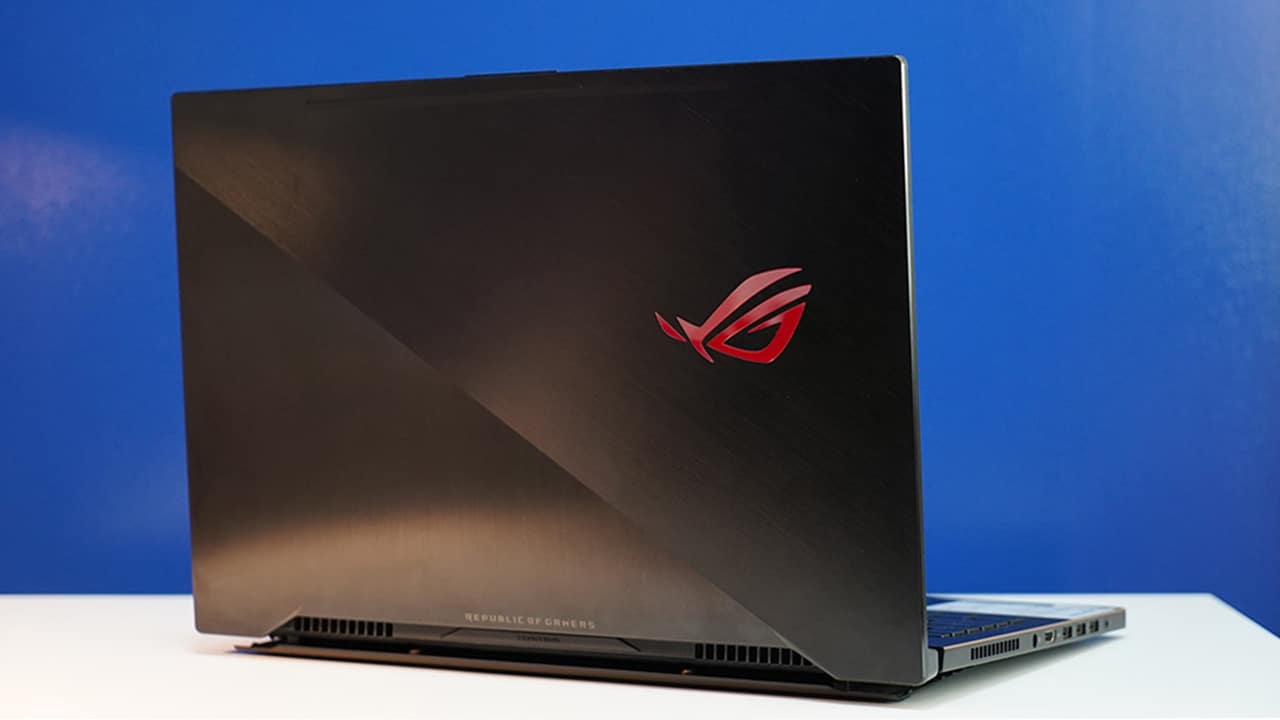 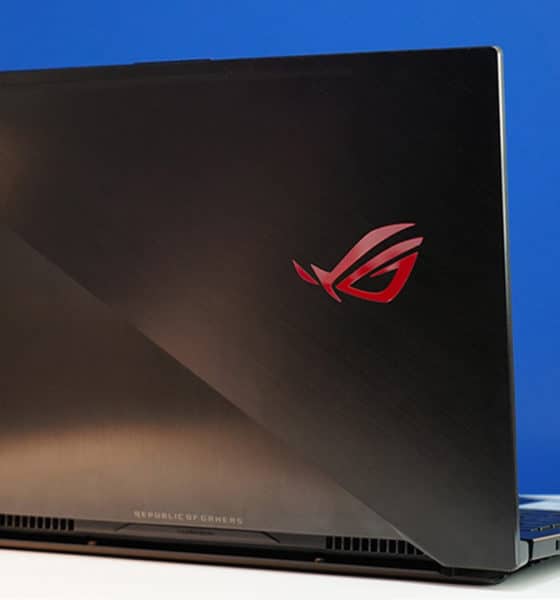 ASUS definitely set standards last year when it came to gaming laptops with really thin profiles. Being one of the first to use NVIDIA’s Max-Q design to squeeze a top-tier GeForce GTX 1080 graphics chip into the ROG Zephyrus was a feat in itself, but it came with certain drawbacks.

Earlier this year, the Taiwanese company announced an update to its high-end gaming laptop, and it’s called the ASUS ROG Zephyrus M (GM 501). It seems like they heard the collective groans of gamers so they shuffled things around, while still keeping the Zephyrus DNA intact.

Starting from its lid, the new Zephyrus M has that brushed metal finish previously seen on its predecessor. Even the segmented design has made its way here to clearly convey it’s from the same series.

Even the chassis is built with the same polycarbonate material with a familiar Active Aerodynamic System. More on that later. 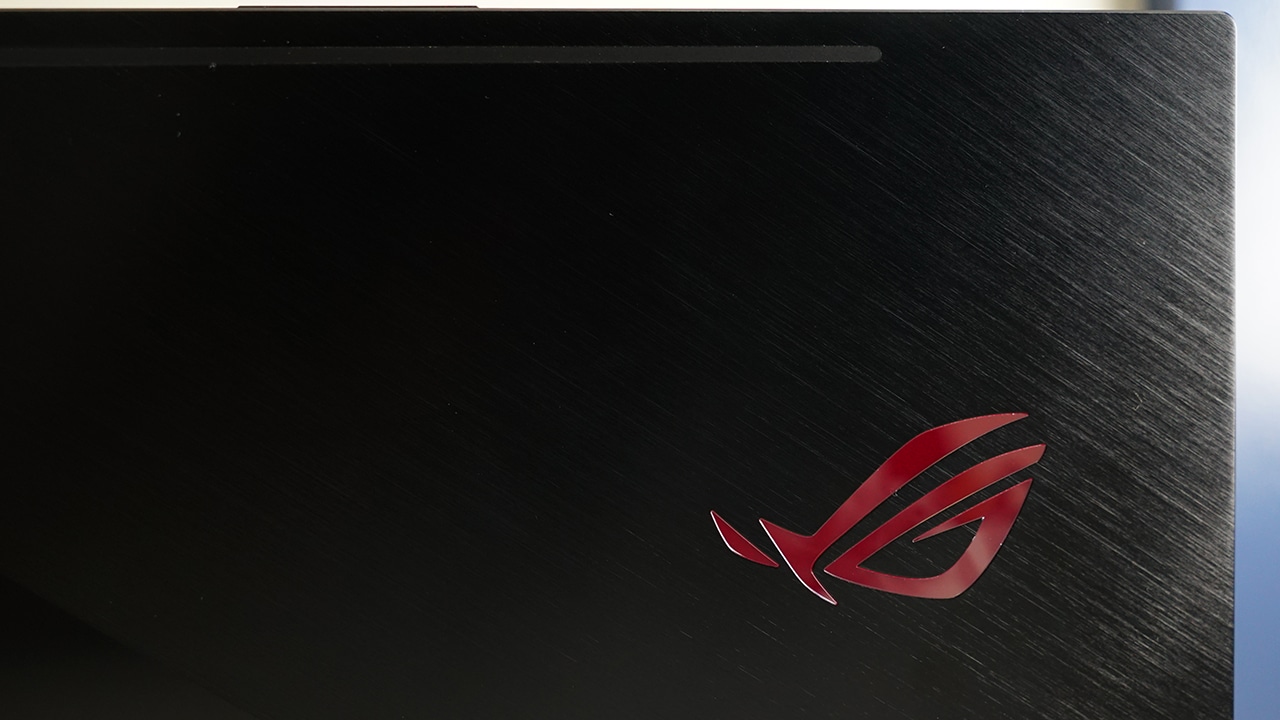 Just like the first model, there’s no mistaking you’re wielding a Republic of Gamers laptop with this glowing emblem slapped on its lid. 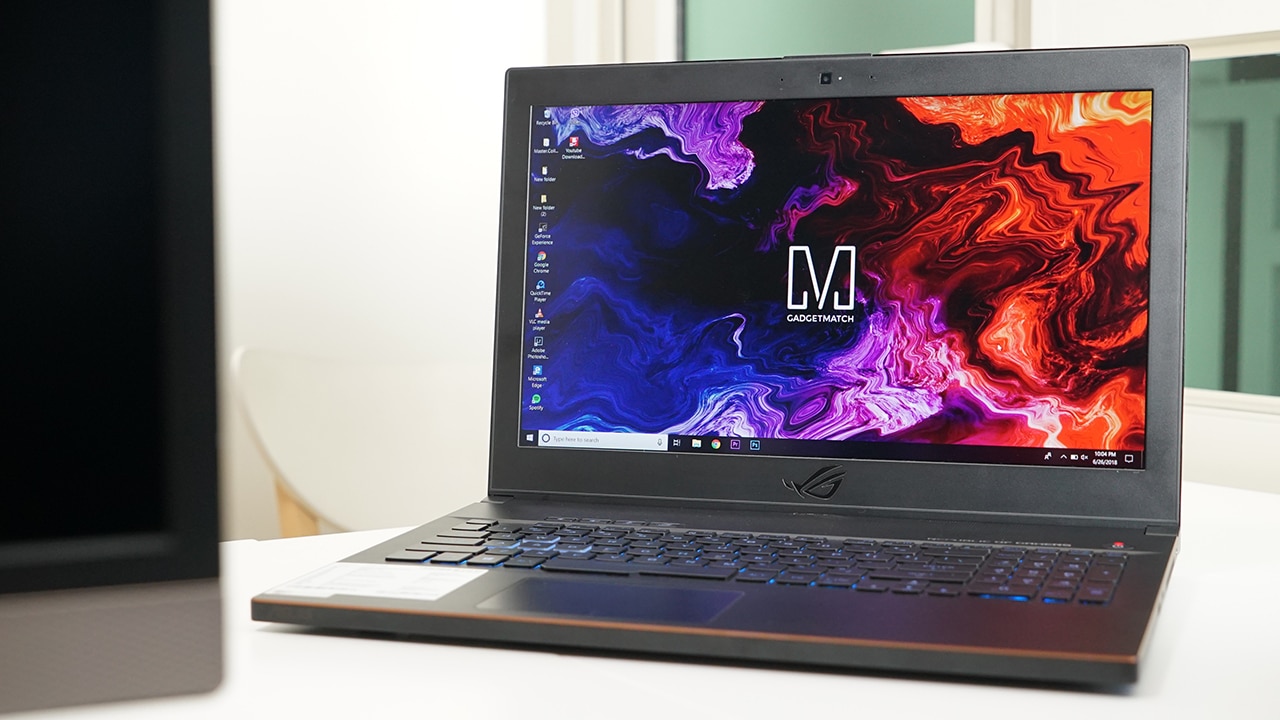 While the new Zephyrus M is thinner than most laptops at 19.9mm, the sizable bezels are still there and could use some trimming. 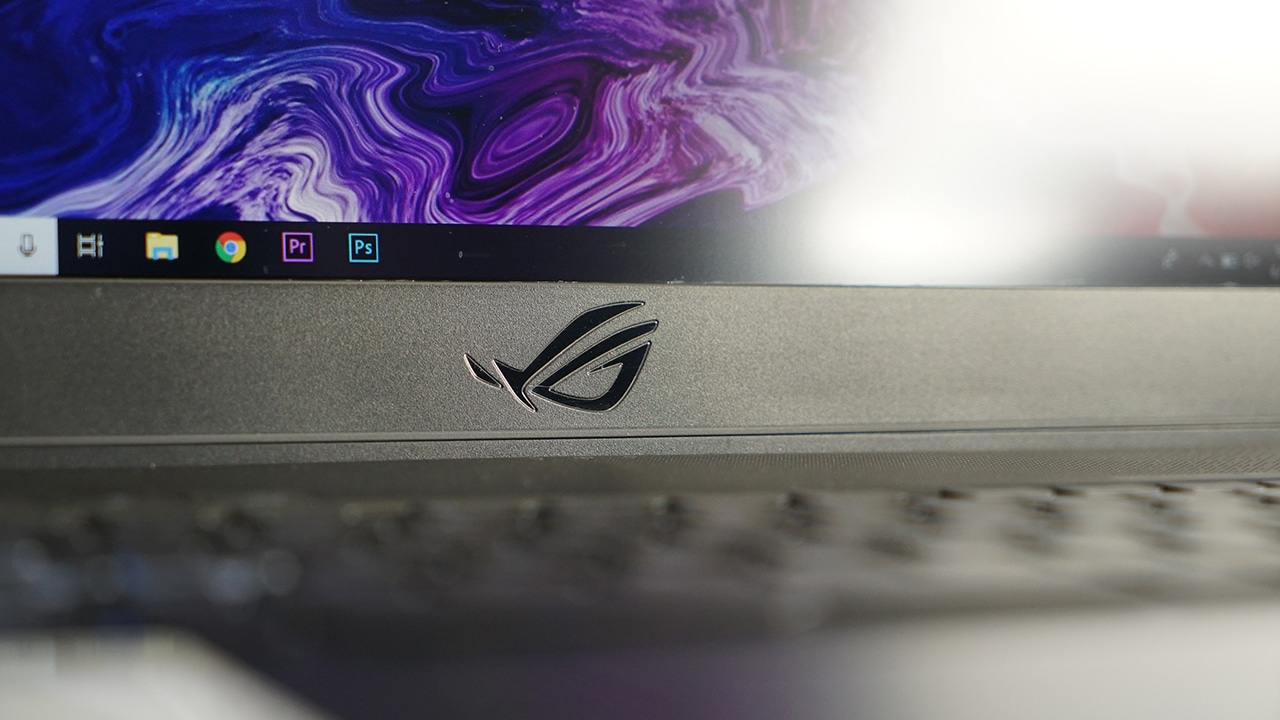 More branding is seen just below the display. 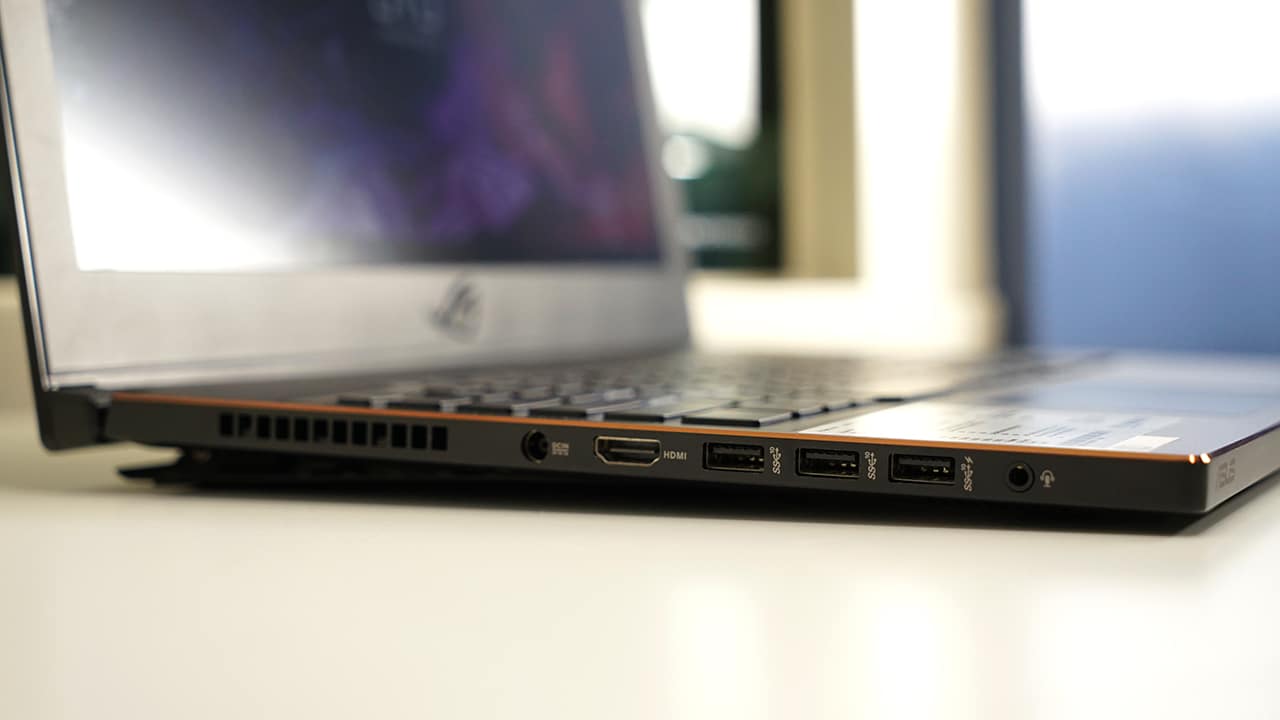 Connectivity-wise, it has a 3.5mm headphone/microphone combo jack, four USB-A 3.1 ports, an HDMI 2.0 port, and one USB-C 3.1 port. We’re not fans of the power port situated in the middle of the rear chassis, but one thing that has been conveniently relocated is the entire keyboard. 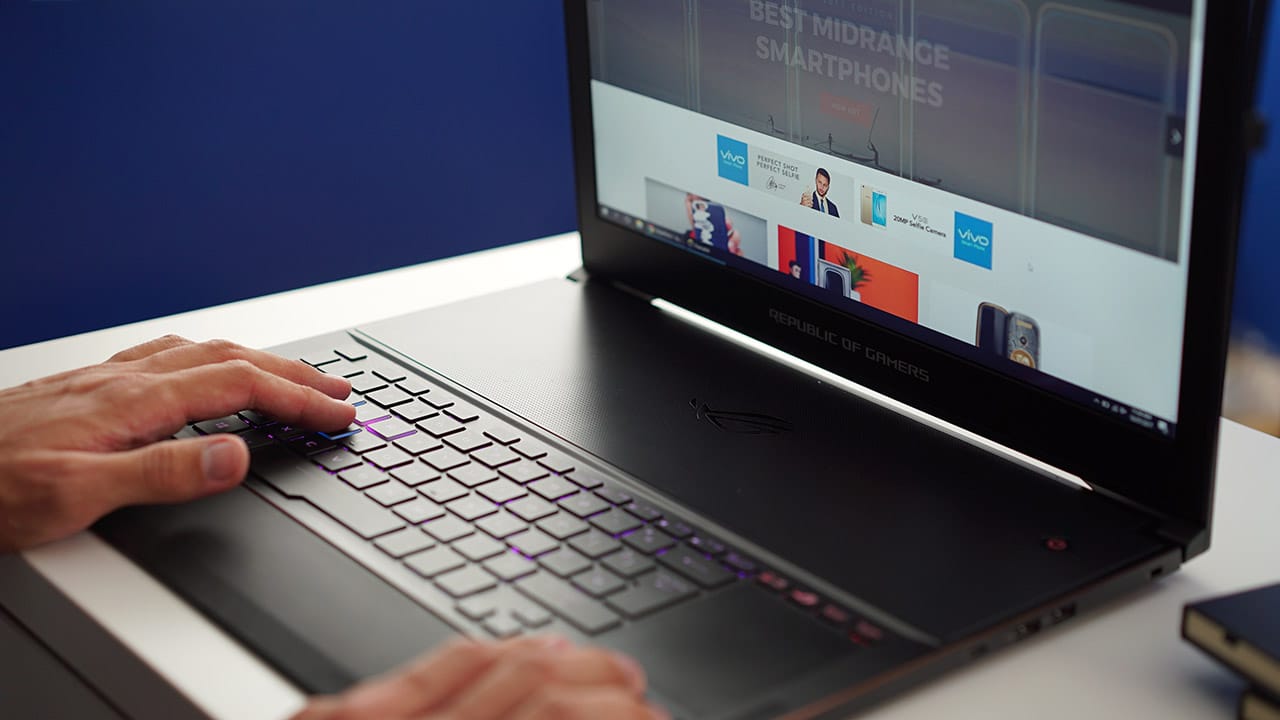 With the first Zephyrus packing most of its internals at the top part of the chassis, the keyboard was squeezed at the bottom and had to sit side-by-side with the trackpad. This presented a steep learning curve, so we’re glad things are more traditional now. 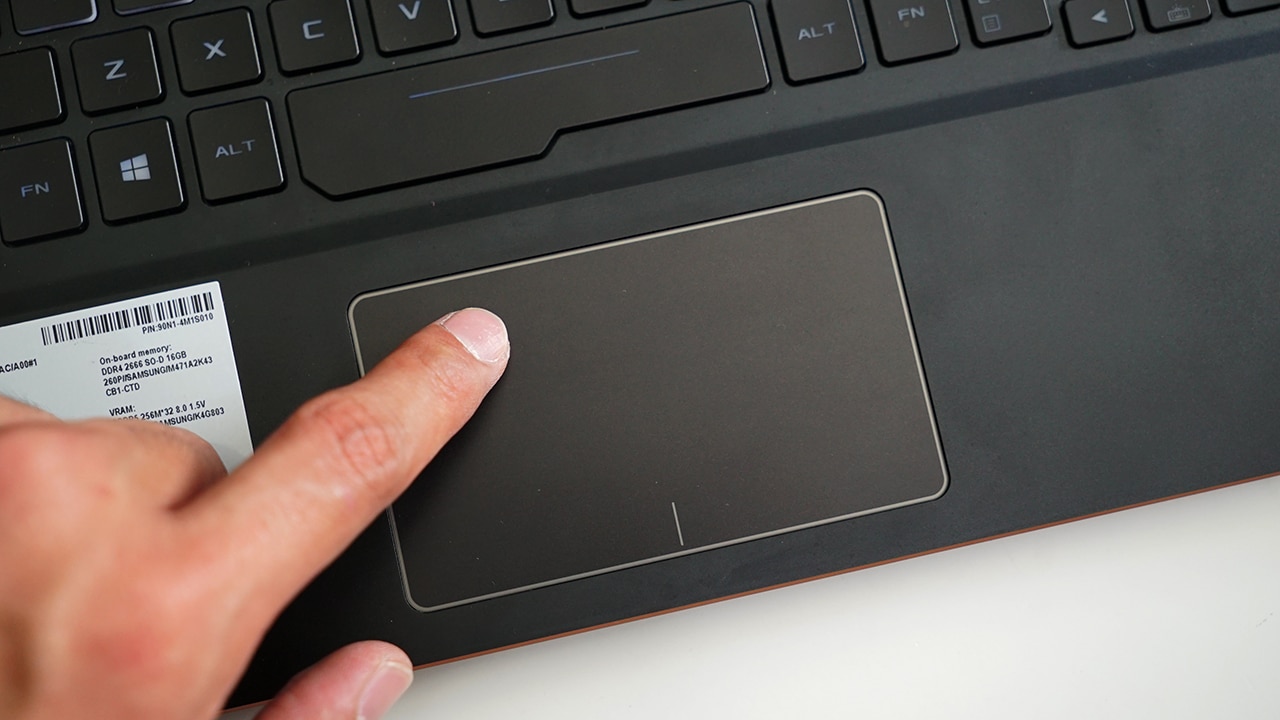 The trackpad is now back to where we’re used to. It’s a bit small for our liking, but if you’re using it to play games, you’d end up using a mouse either way. 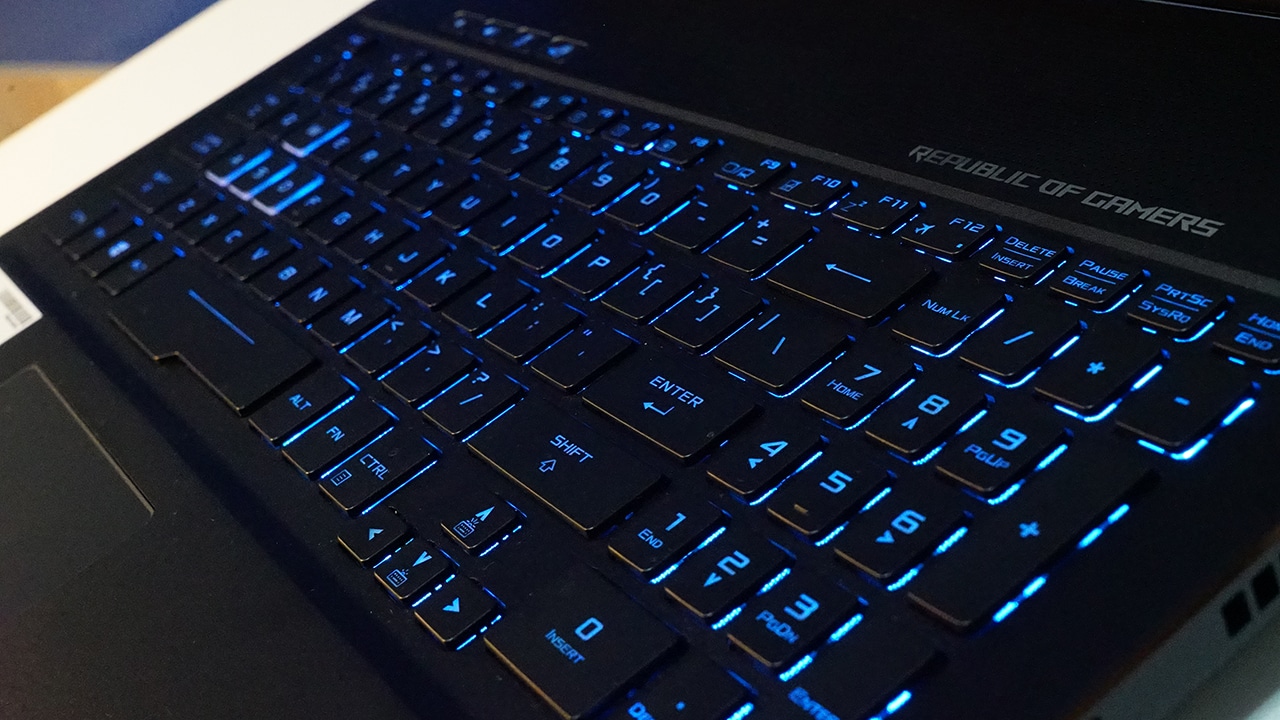 It’s a lot easier to type on the Zephyrus M, not only because of its more comfortable relocation, but also due to the backlit keys having more travel in them than the previous model. 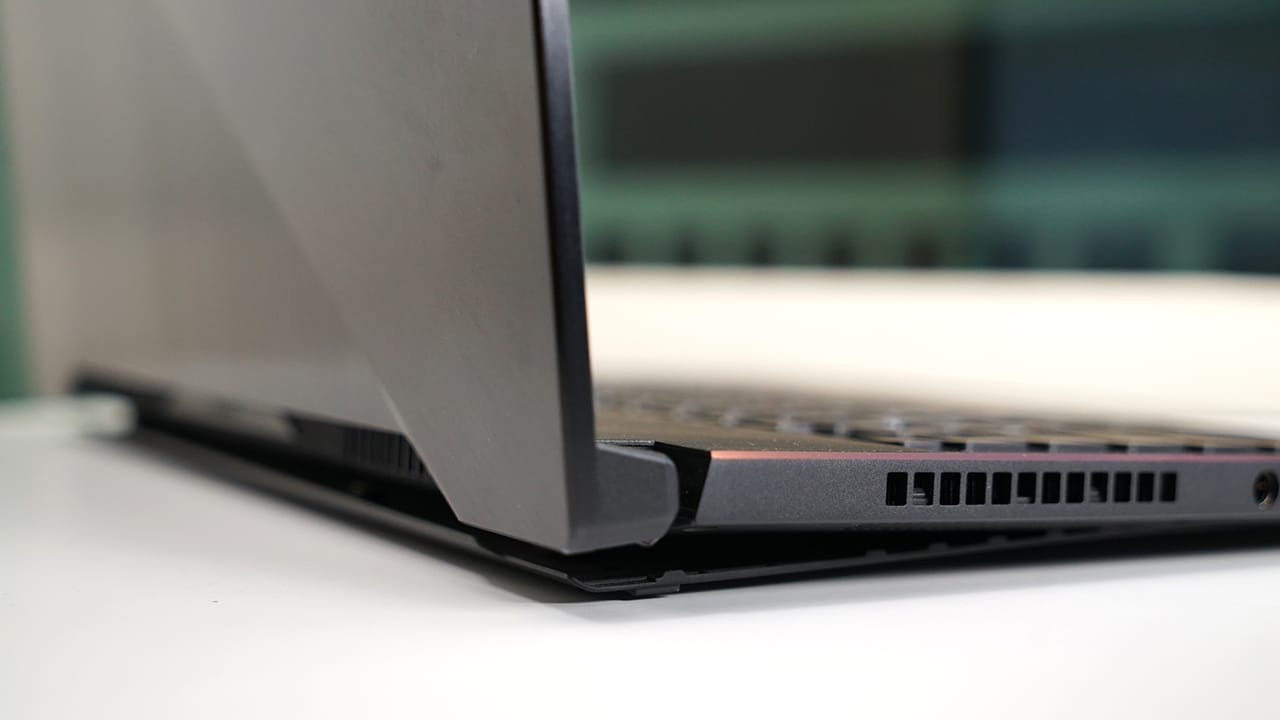 As mentioned earlier, it keeps the same Active Aerodynamic System that aids in keeping the laptop well-ventilated. This works by using a special mechanism which lifts a portion of the chassis up once the lid is opened.

Since there’s better air flow than on other gaming laptops, the temperature is reduced during long usage and demanding tasks. And yes, the mechanism still looks cool in motion. 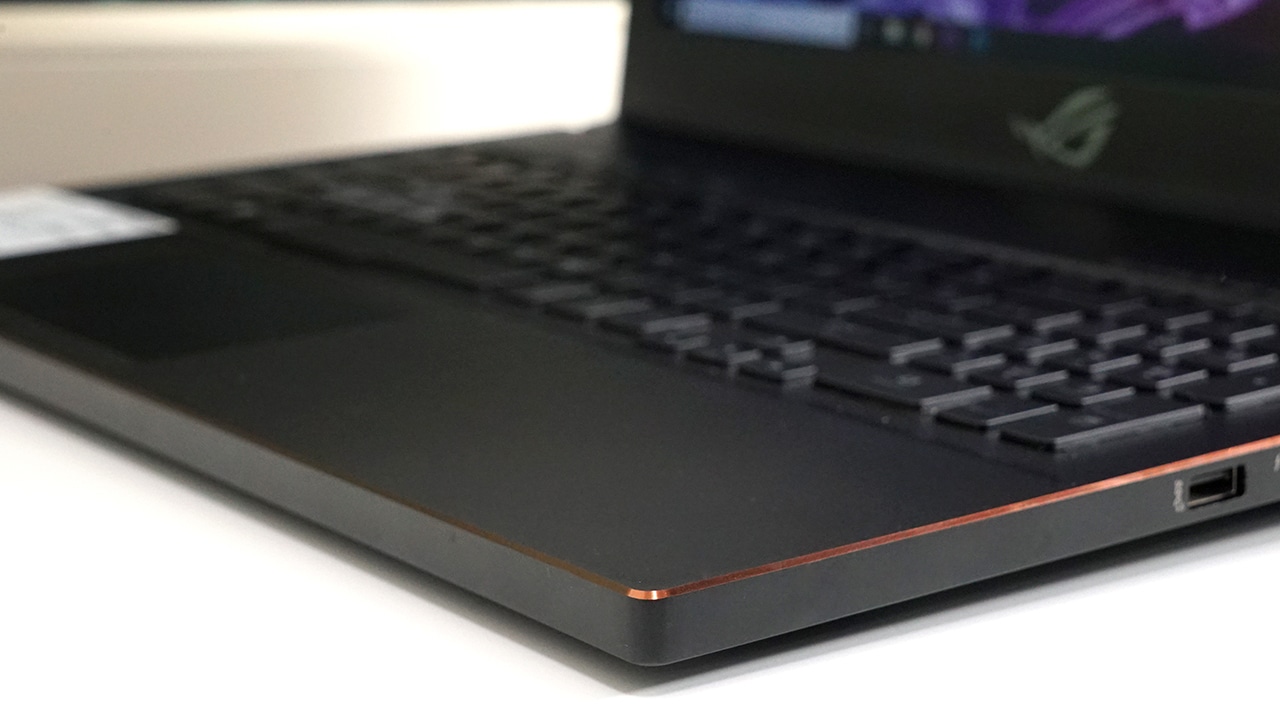 Edges are chamfered and accented by a colored strip to break the monochromatic approach of the body. 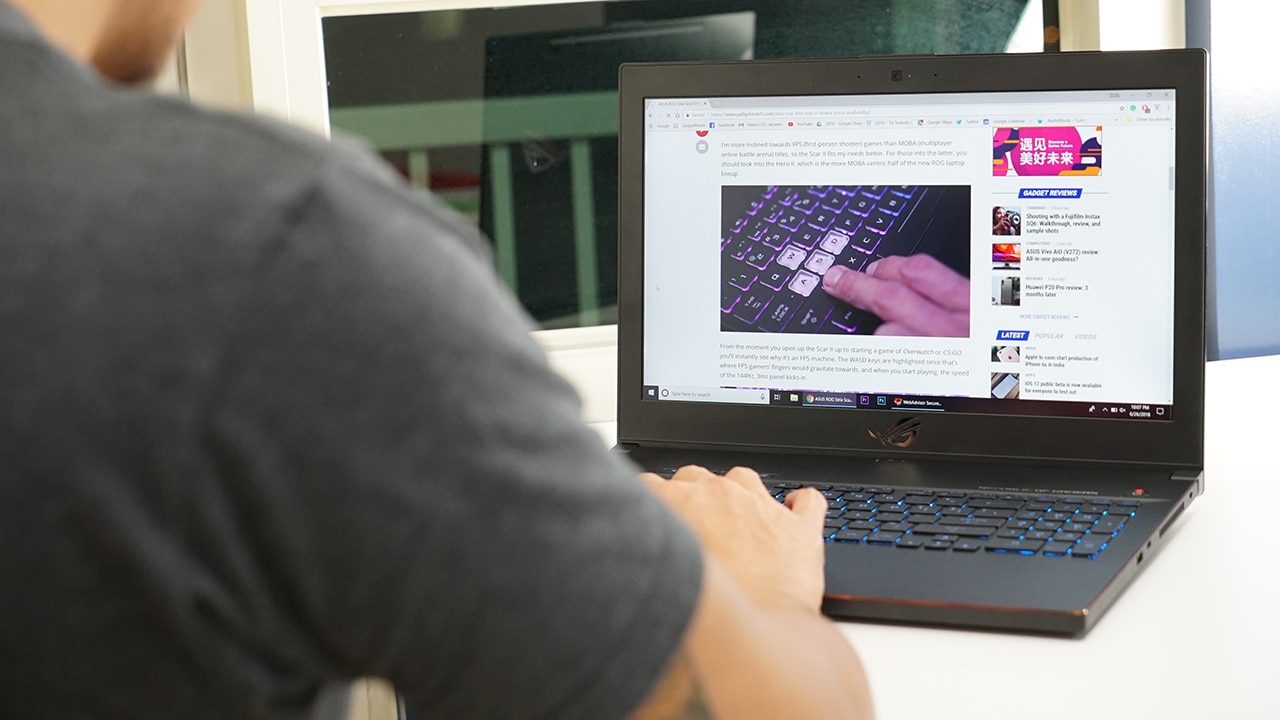 The 15.6-inch Full HD screen of the Zephyrus M is backed by a 144Hz refresh rate and 3ms response time, which is an upgrade from last year’s model. It should display faster and smoother movement, especially in intense games. Additionally, since G-Sync is also supported, screen tearing and freezing are kept to a minimum. 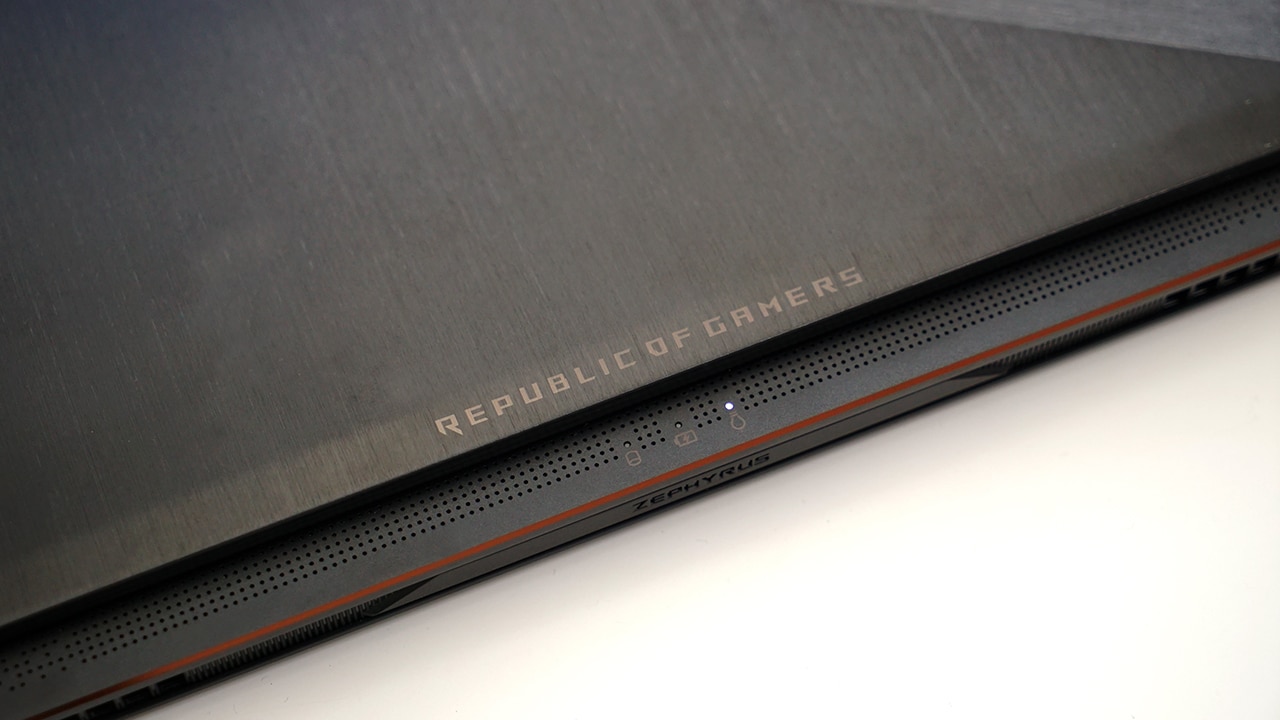 Inside, an Intel Core i7-8750H runs the show with up to 32GB RAM. Its software also allows users to switch between two different GPU modes depending on the situation. There’s the Optimus power-saving mode if you don’t have your charger around, while its G-Sync mode unleashes all the capabilities of your graphics unit. 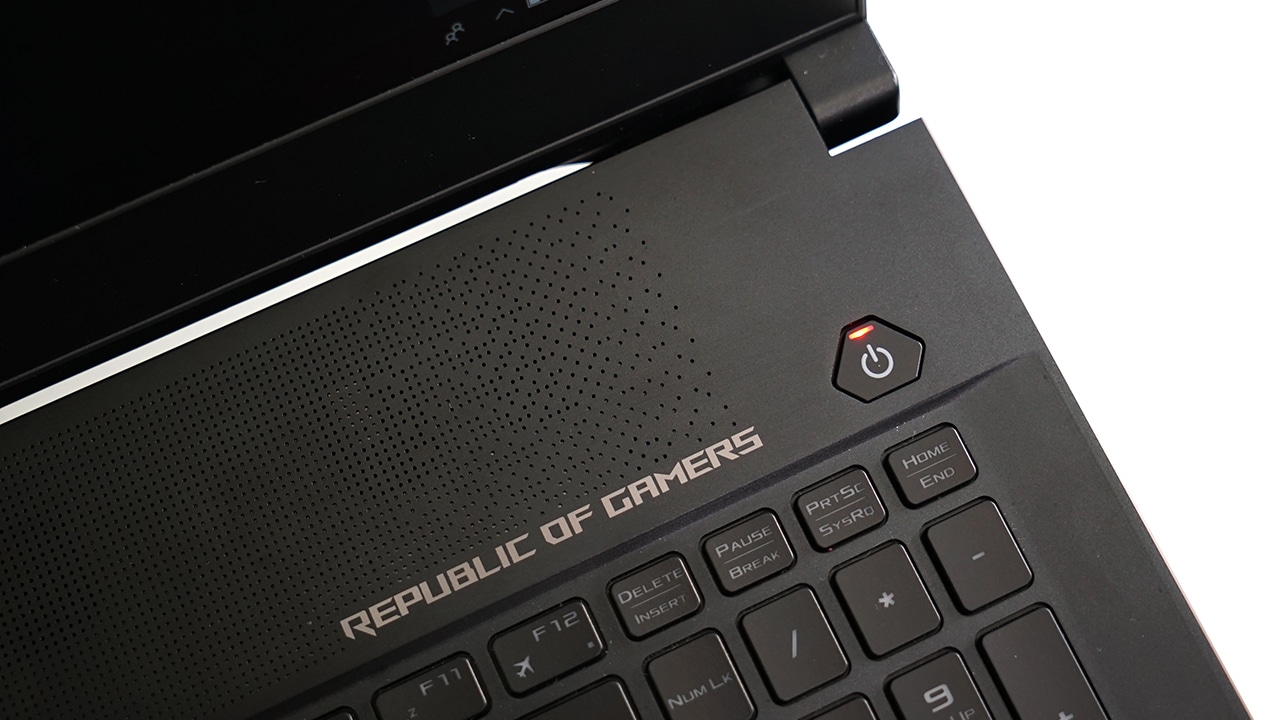 Buyers now have the option to choose a variant with either NVIDIA’s GeForce GTX 1060 or 1070 GPU depending on their budget and needs, whereas the first Zephyrus only came with a GTX 1080.

This means the Zephyrus M is a more affordable option that doesn’t skimp on features and still packs a punch (in addition to being more ergonomically sound). The variant with a GTX 1060 is priced at US$ 1,899 while the GTX 1070 option will go for US$ 2,199. For comparison, the Zephyrus last year started at a heftier US$ 2,700.