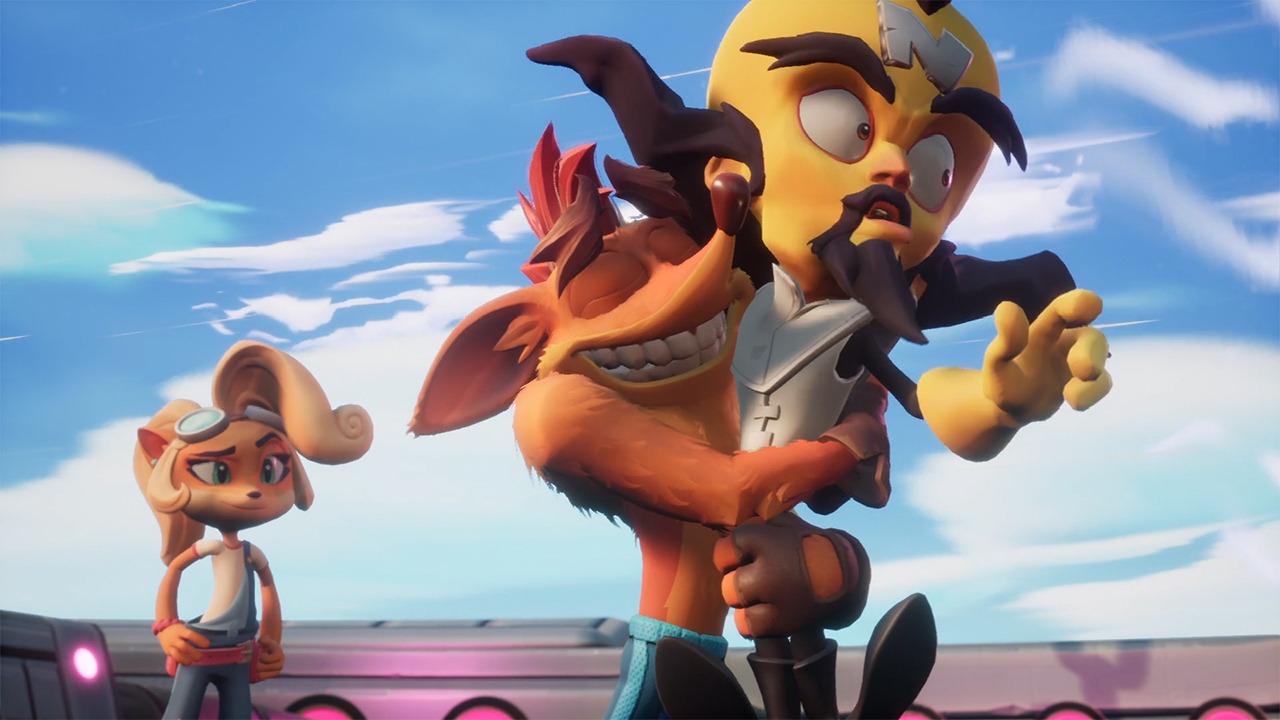 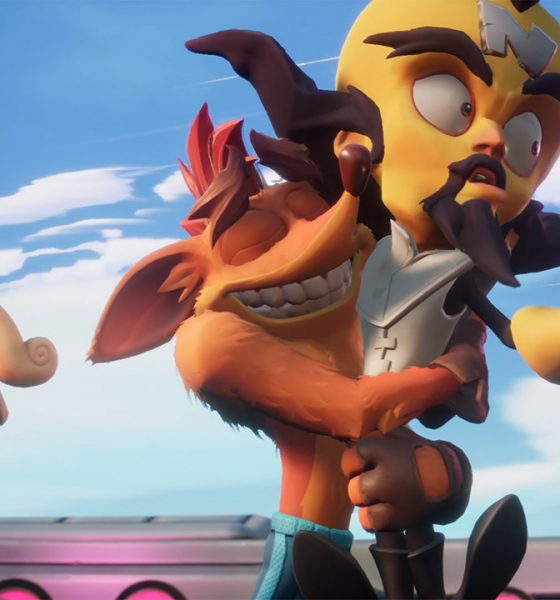 When Crash Bandicoot resurfaced in 2017, I felt utter joy and nostalgia at the same time. Even though Crash Bandicoot: Warped was the first Crash game I ever played, the franchise became a great part of my childhood. With the release of the N. Sane Trilogy, it now gave new players an opportunity to experience some hardcore platforming that most late 90s kids remember.

Earlier this year, they announced the arrival of Crash Bandicoot 4: It’s About Time. Activision, Vicarious Visions, Toys For Bob, and Beenox all came together to work on the trilogy’s “proper” platforming sequel. When I heard about this, I dropped everything and waited for as long as possible to get my hands on the game.

After finally playing, it’s honestly the Crash platforming sequel I had always wanted. There’s a big reason for that.

See, before It’s About Time, there was actually another Crash Bandicoot dubbed as the fourth title: The Wrath of Cortex. It was released on the PlayStation 2, Xbox, and GameCube back in 2001-2002, almost 3-4 years after the original trilogy. For this game, the story centered around the presence of Crunch Bandicoot, another bandicoot creation of the game’s main antagonist, Dr. Neo Cortex. 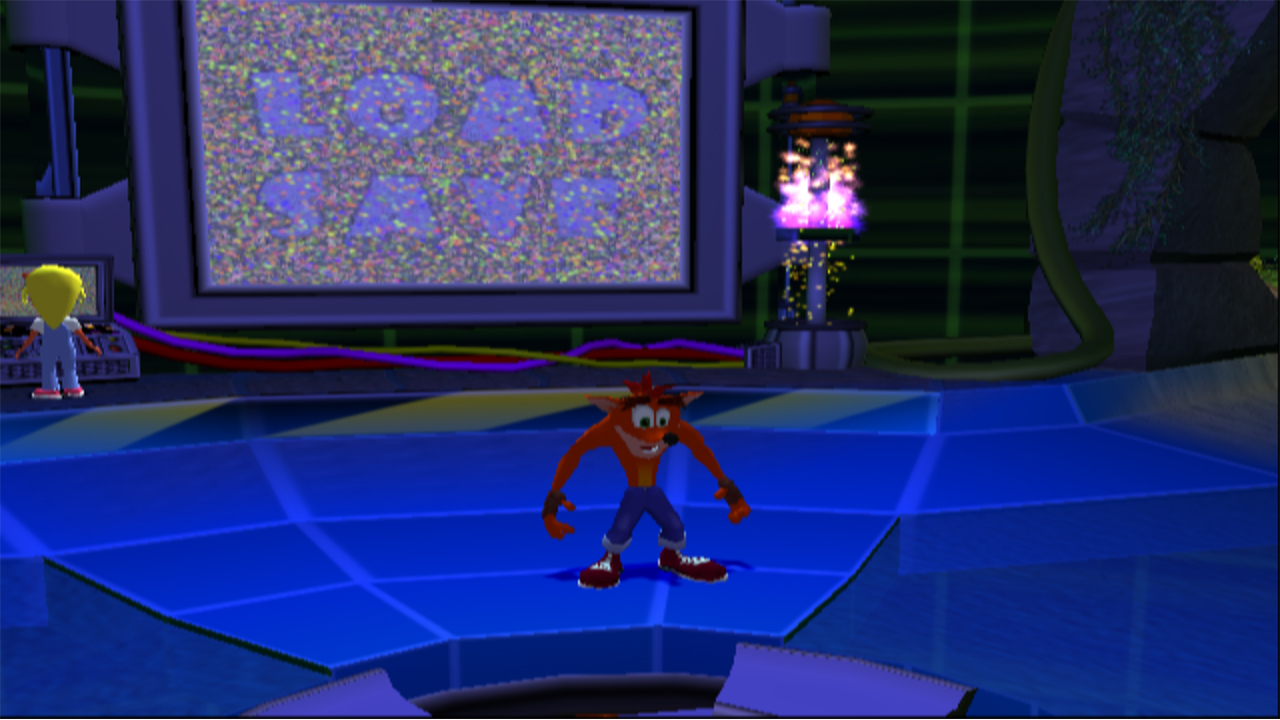 Crash in The Wrath of Cortex for the PlayStation 2

The game itself received relatively average reviews, with most people simply feeling like it was a downgrade from the original. I tried playing the game again recently, and by 2020 standards, it feels unpolished. Gameplay as a whole was fairly janky, the story just doesn’t seem to add up, and it’s just a carbon copy of Warped but more slippery. 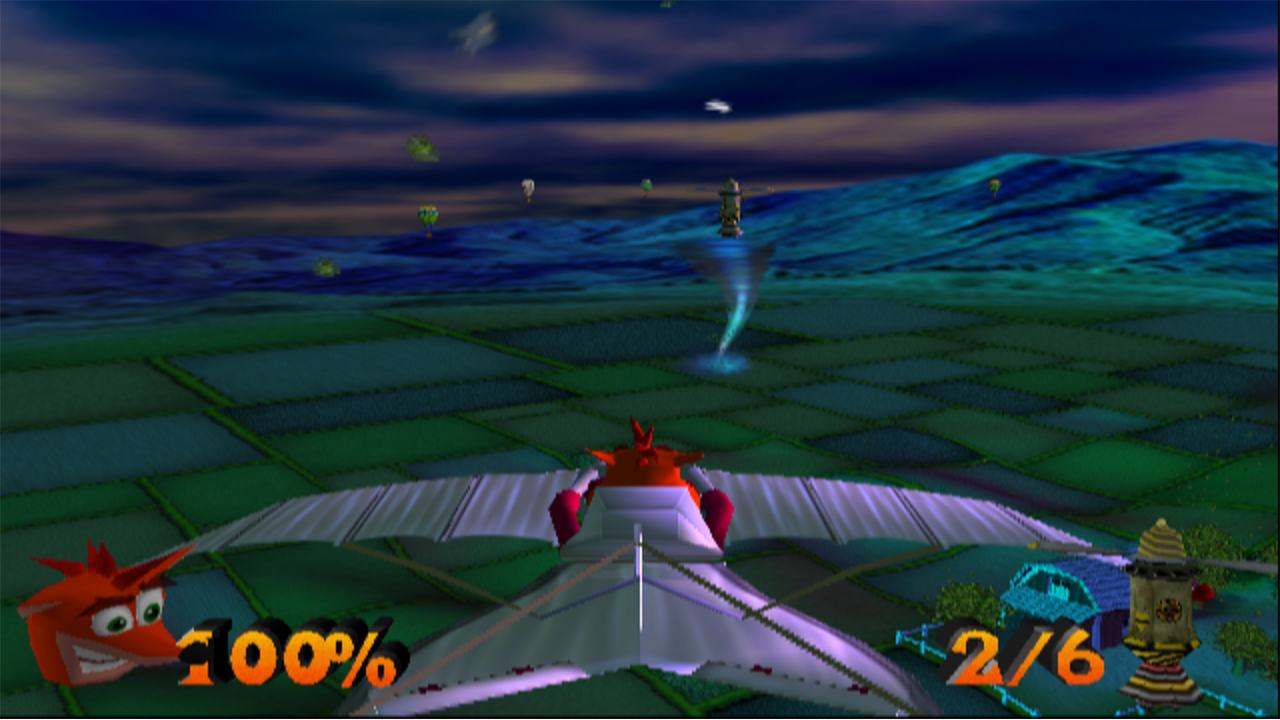 Level design for Tornado Alley in The Wrath of Cortex

So when Activision and Vicarious Visions announced that another Crash Bandicoot 4 was coming out, I had hoped that it wouldn’t end up like Wrath of Cortex. And boy, was I ever relieved that it didn’t.

Taking the premise of Wrath of Cortex, but making it better

It’s About Time takes place directly after the events of Warped — specifically the secret ending of the game after getting all the collectibles. Essentially, Cortex and his crime partner, Dr. Nefarious Tropy decide to simply open time rifts across the continuum. Aku Aku, the all-powerful mask that protects Crash, senses the impending danger and alerts Crash about it. 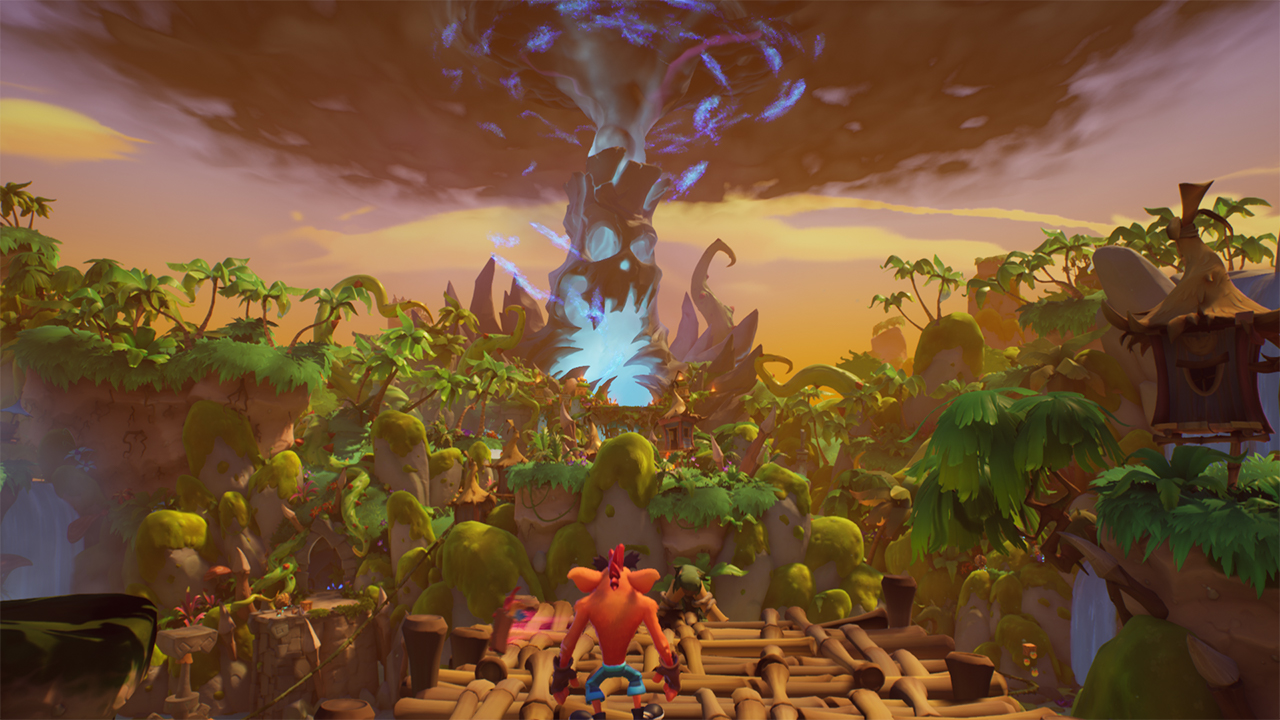 The whole game takes you through different time periods, even going as far as more recent events in the Crash universe. You are tasked to awaken different Quantum Masks that will help you in your quest to stop Cortex and N. Tropy. I honestly thought that they did the masks thing better than Wrath of Cortex in this regard.

As you progress through each level, you face a ton of challenging platform segments and waves of enemies and death-inducing obstacles. Within every other time period, you have boss levels with major recurring characters from all other past Crash games. In essence, it tries to incorporate the classic Crash formula, but enhances the experience.

Plus, you get to go on adventures as either Crash or Coco. In some cases, you even get to play as Tawna Bandicoot, Dingodile, and Cortex himself!

Gameplay that’s as smooth and difficult as the N. Sane Trilogy

One of the main things I was looking for in It’s About Time was consistency. I wanted this new Crash game to remain consistent with the remastered trilogy in terms of gameplay, character movement, and relative learning curve. See, the original trilogy was not an easy set of games to get around, especially if it’s your first time playing. 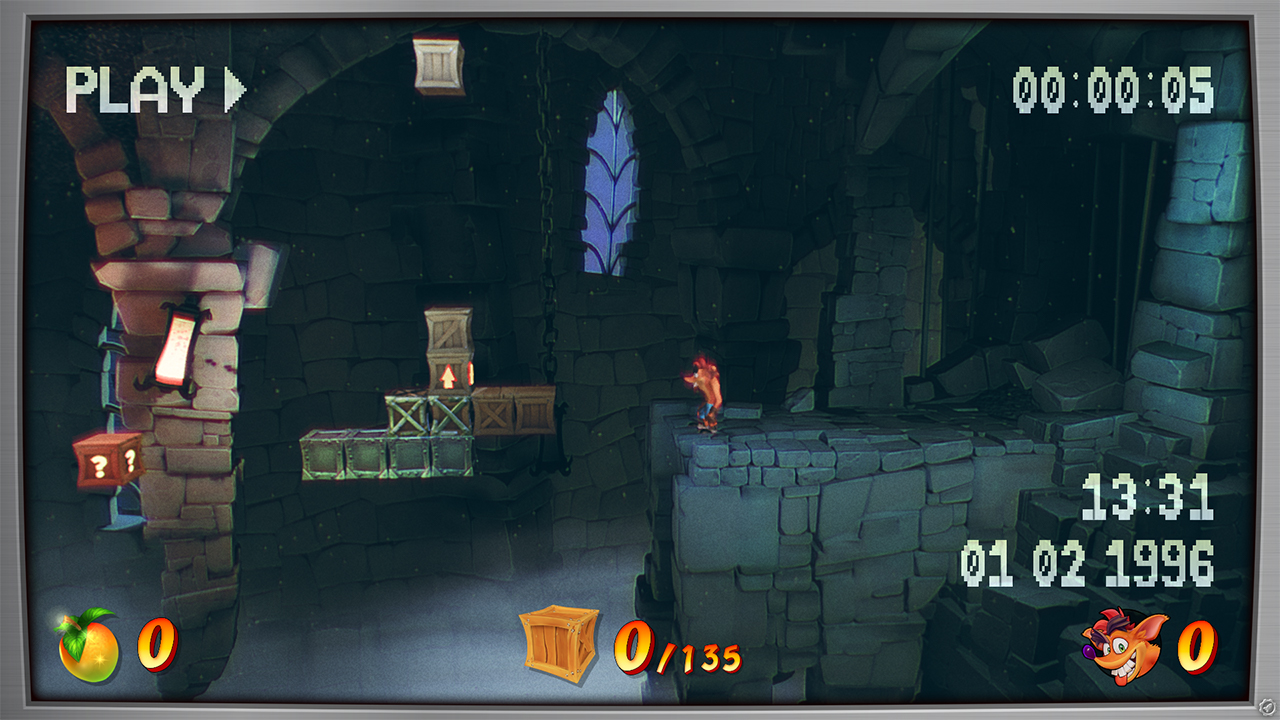 For long time Crash fans like myself, I felt that this game was more pain-staking yet just as smooth to control as the trilogy. Crash keeps some of his skills that he earns from Warped like the Super Body Slam and Double Jump, which I thought were the two logical ones to keep. However, you’re going to need more than just those abilities since the game throws so many obstacles later on.

It’s a painful grind to finishing the game at 100% completion this time around. Instead of collection crystals, you collect gems from accomplishing certain tasks within each level. From breaking every box to not having more than three deaths, these would require several perfect playthroughs. Honestly, that’s just insanely difficult to accomplish, and I’m all for it!

The most vibrant and creative game design in any Crash game

The moment you start your adventure to N. Sanity Peak, you’re already greeted to the gorgeous and colorful level design. I felt that Toys For Bob took a page out of their work on the Spyro: Reignited Trilogy with all the colors for each level. As you progress through the game, you’ll have brief moments to just take all of that in. 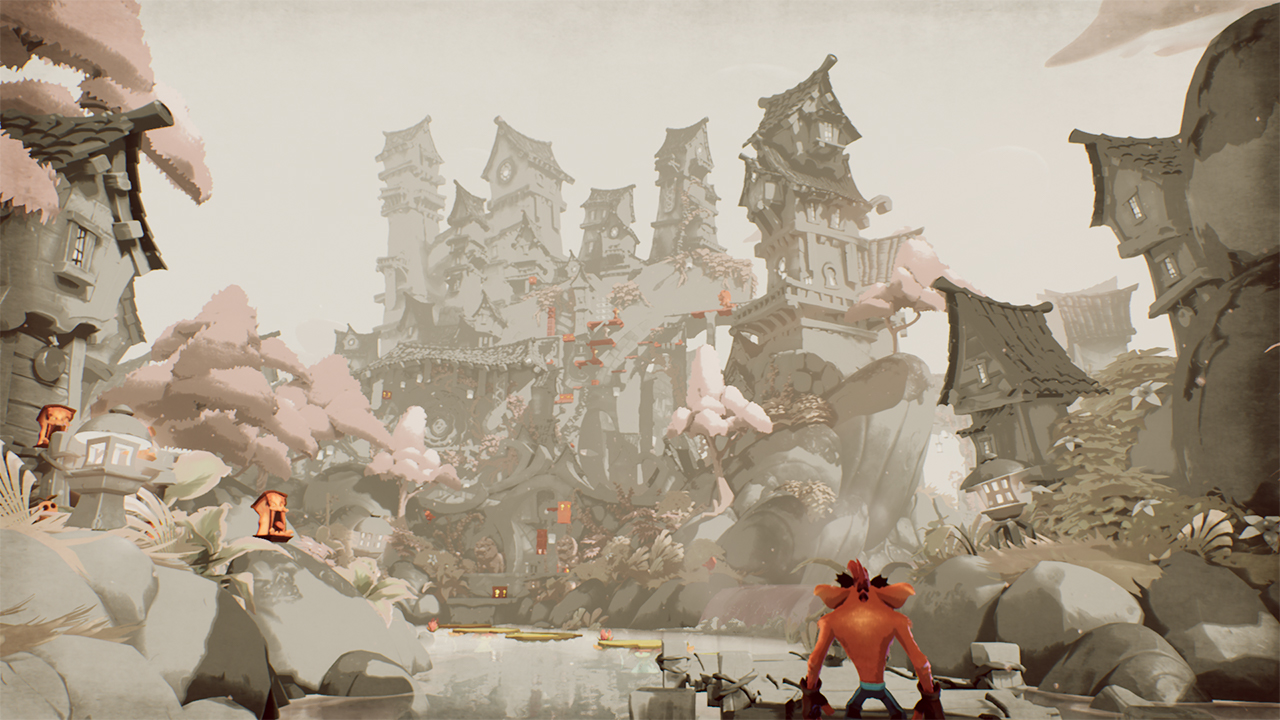 In terms of overall level design, it is a big step up from the N. Sane Trilogy in my opinion. For the most part, it gives you a different variety of level styles you haven’t seen in the original trilogy. From vine-swinging to rail-riding, the developers went all out to give you a different Crash game all together. 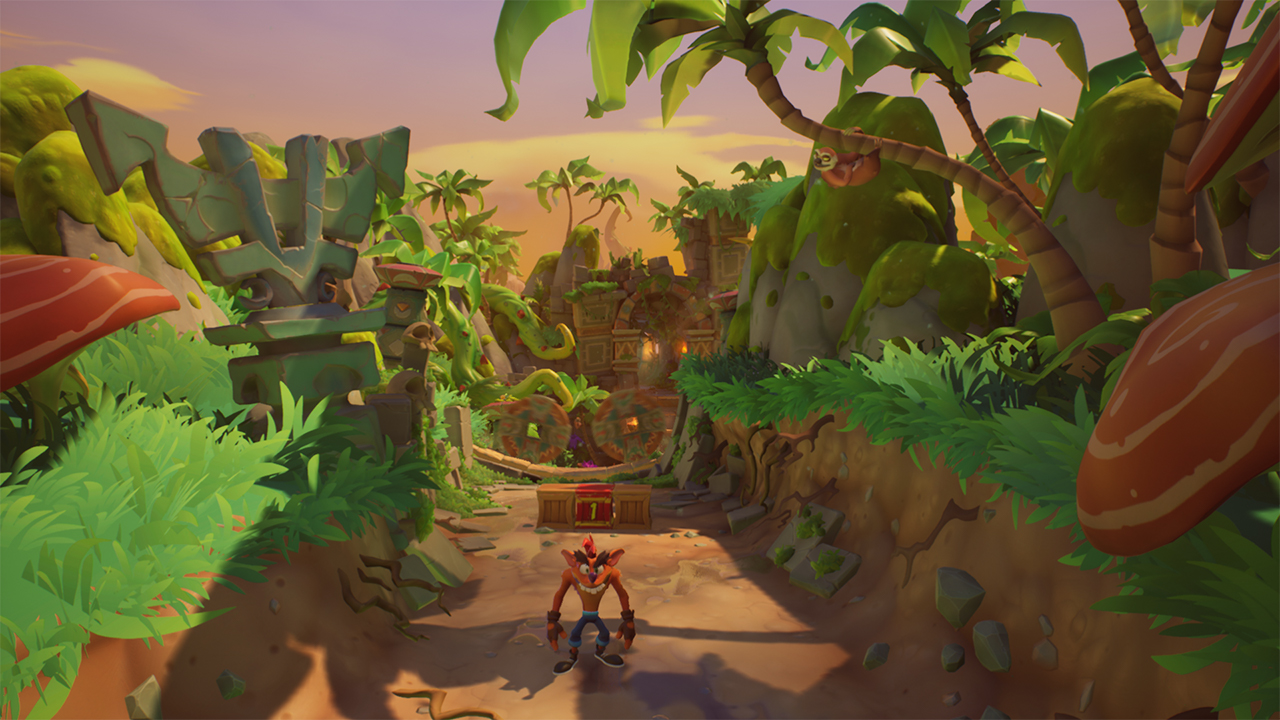 Furthermore, they even managed to sneak in similar obstacle patterns from the previous games. Something silly like timing challenges or platforming segments are just a few examples of these. I felt that these were put in here to cater to the long-time or hardcore Crash platformer fans.

Apart from the sneaky insertion of familiar segments from older games, they also added a ton of small details referencing other games, as well. I mean, I wouldn’t call the giant Spyro float or the Spyro inflatable by the beach small details. However, the developers really threw in a ton of easter eggs. 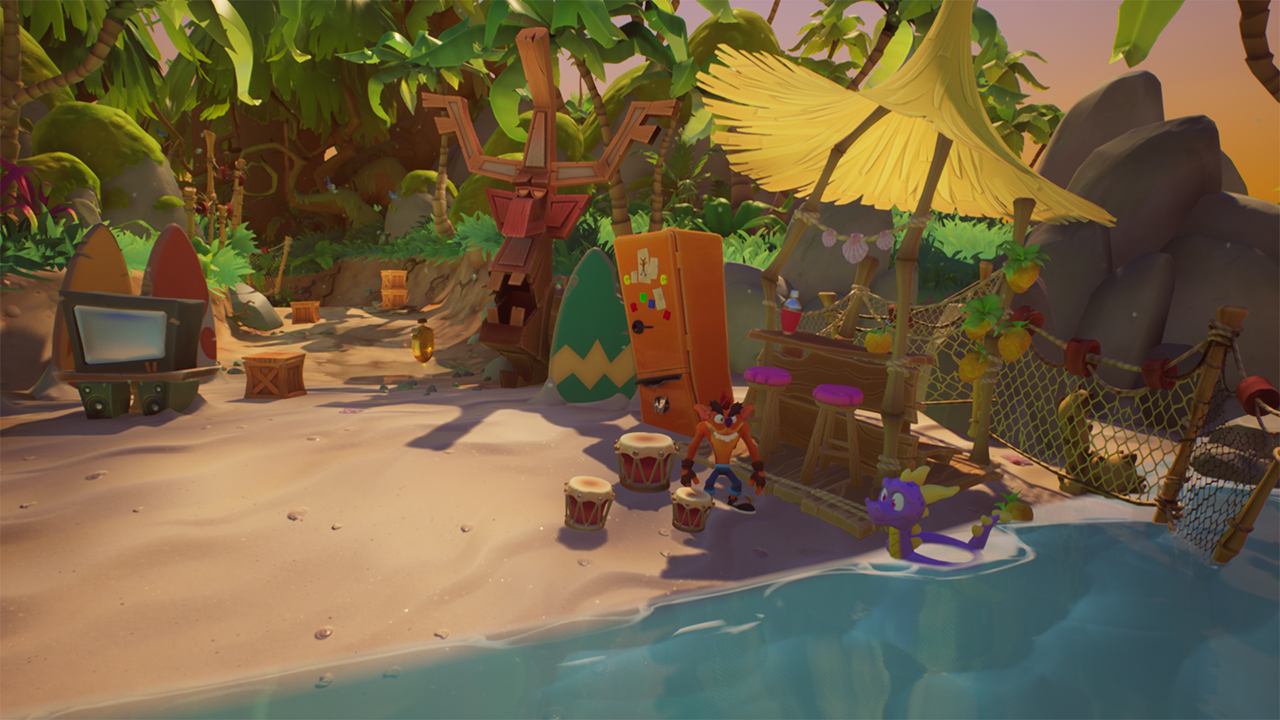 Because I took my sweet time trying to get through every level, I noticed most of these the moment they came up. Most levels are sprawling with references to the purple dragon, or characters from older Crash games like Crash Bandicoot: The Huge Adventure. They even went all out to promote Crash Team Racing: Nitro-Fueled in one time area. 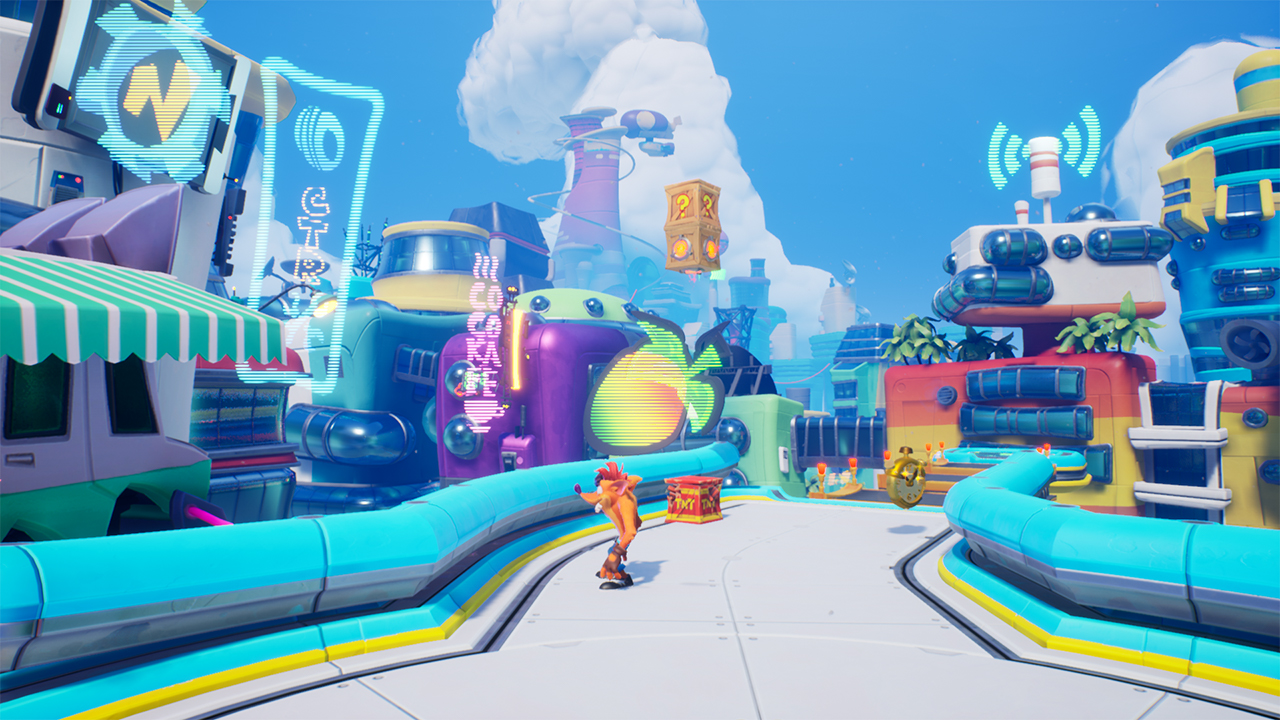 Even if you’ve never played any Crash game before, you’d dart your eyes at them. I think Toys For Bob and Beenox made it a point to spoil you with all of these references.

How things should have been 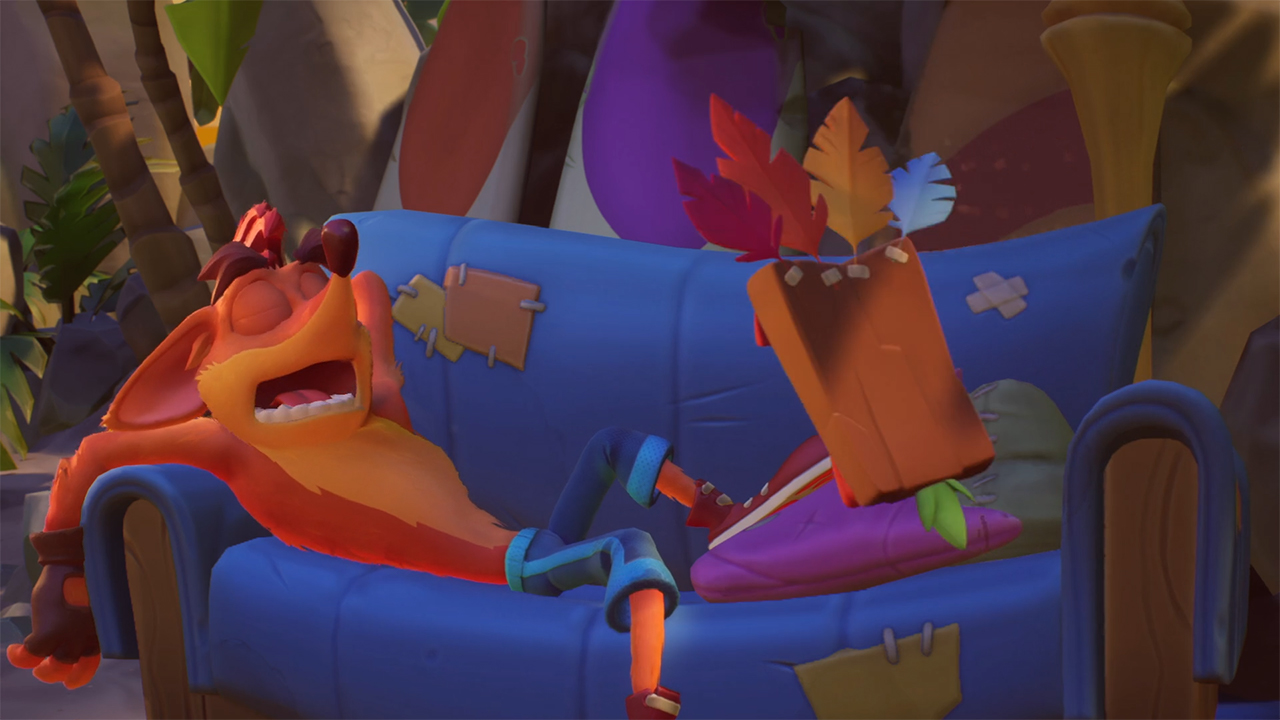 Crash Bandicoot 4: It’s About Time served its true purpose as the official fourth chapter of the Crash universe. It takes the core Crash formula and throws it into a brand new world, with a plot that makes sense in the grand scheme of things. I’d like to think that this whole game is just much more enhanced than the original trilogy all in all.

From the fantastic visuals to the difficult gameplay style, It’s About Time goes for an authentic yet novel approach. It will make you feel a great deal of awe while you constantly try to die less than 20 times every stage. It sticks to the brutal platforming mechanic it’s known for, while improving the experience.

I can honestly say that the absurdly long 22-year wait for a sequel to the trilogy was worth it. If you want to experience rage and fulfillment all in one game,  I highly suggest you pick this up. 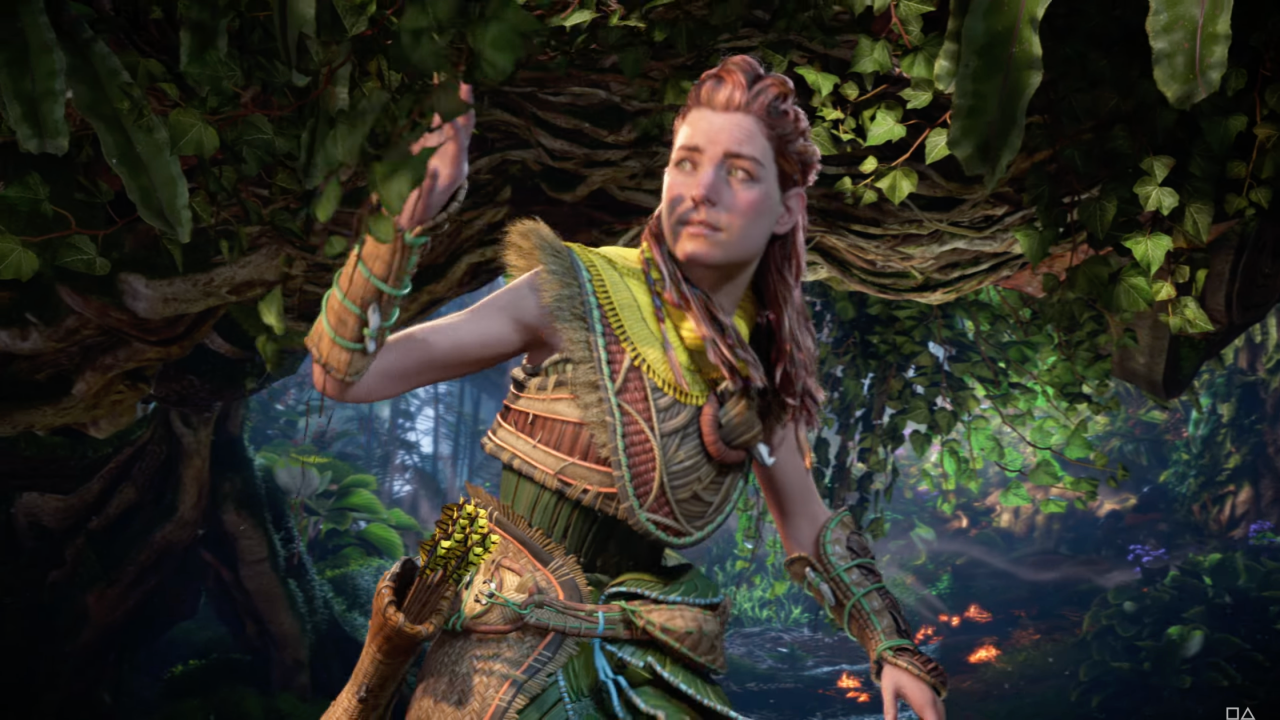 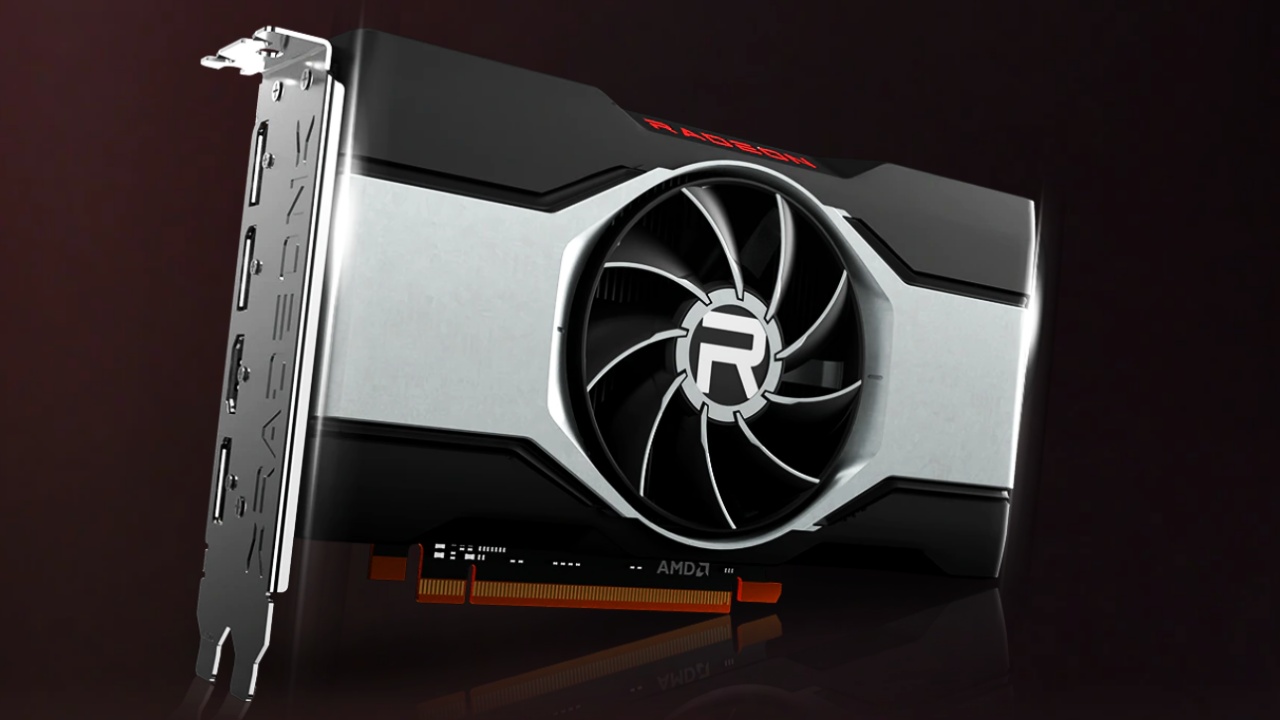