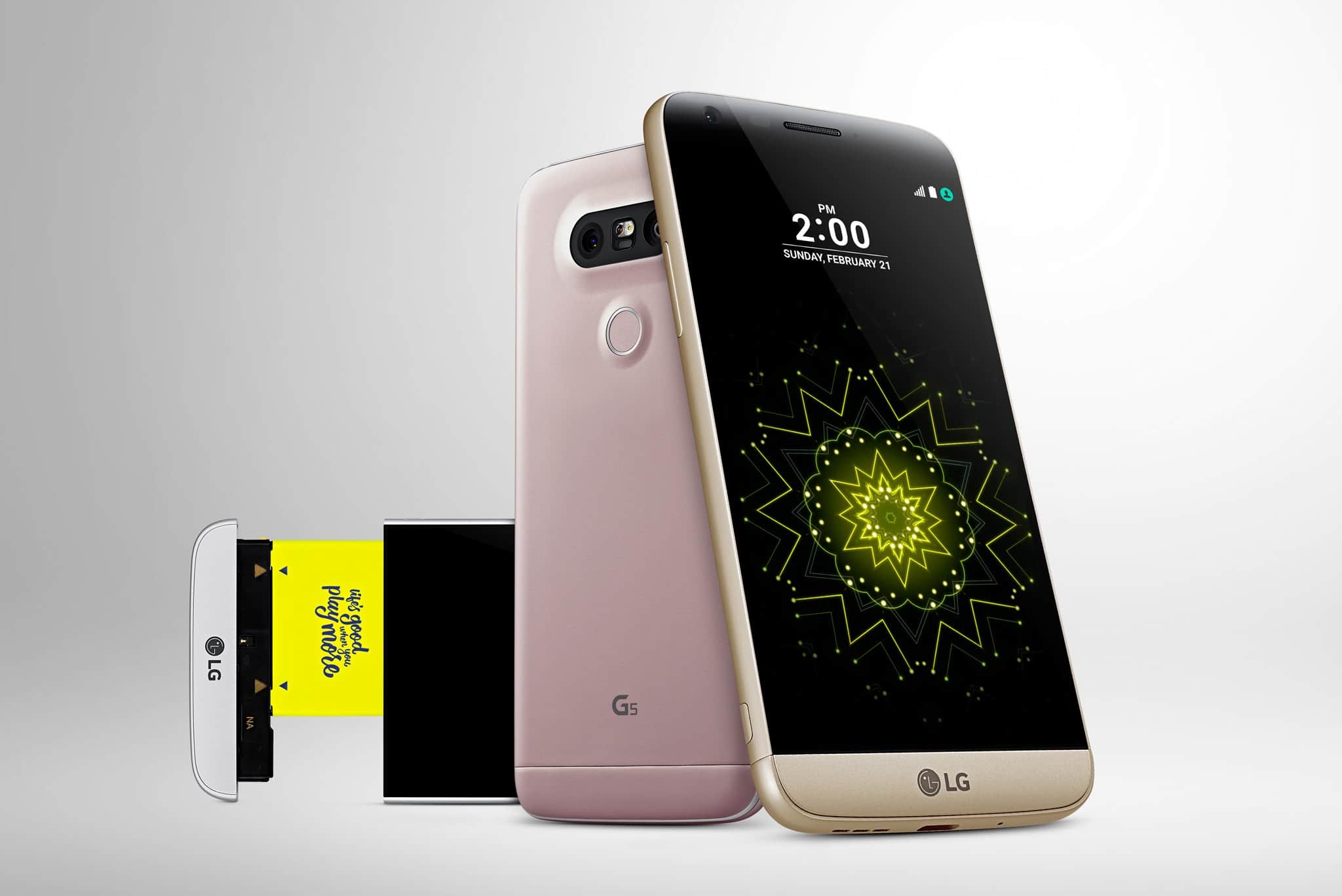 LG just announced its flagship entry for 2016, and if there’s anything to be said about the G5, it’s that LG means business — or should we say, smartphone business. Think about it: When was the last time we saw a top-tier LG phone debut alongside that of its South Korean rival? The answer, in case you were wondering, is never. That alone should establish how important — and how big of a gamble — the G5 is for the Seoul-based company’s flailing phone business in the long term. And make no mistake: LG didn’t hold back punches in creating this Android heavyweight.

Everything about the G5 — from its redesigned metal unibody to its semi-modular design, to its high-tech innards and double-shot of cameras on the back — points to LG finding itself in sixth place in the global smartphone race, behind Lenovo (fourth) and Xiaomi (fifth), and throwing everything plus the kitchen sink in the competition’s direction. If anything, the G5 is a desperate attempt at relevance in a world market teeming with cheap but feature-rich handsets from the Far East. That is, amid LG’s improved shipment numbers of 59.7 million in 2015 (versus 59.1 million in 2014).

We don’t expect the G5 to be cheap — pricing remains up in the air at the moment — but there’s a laundry list of reasons to be excited about the device. 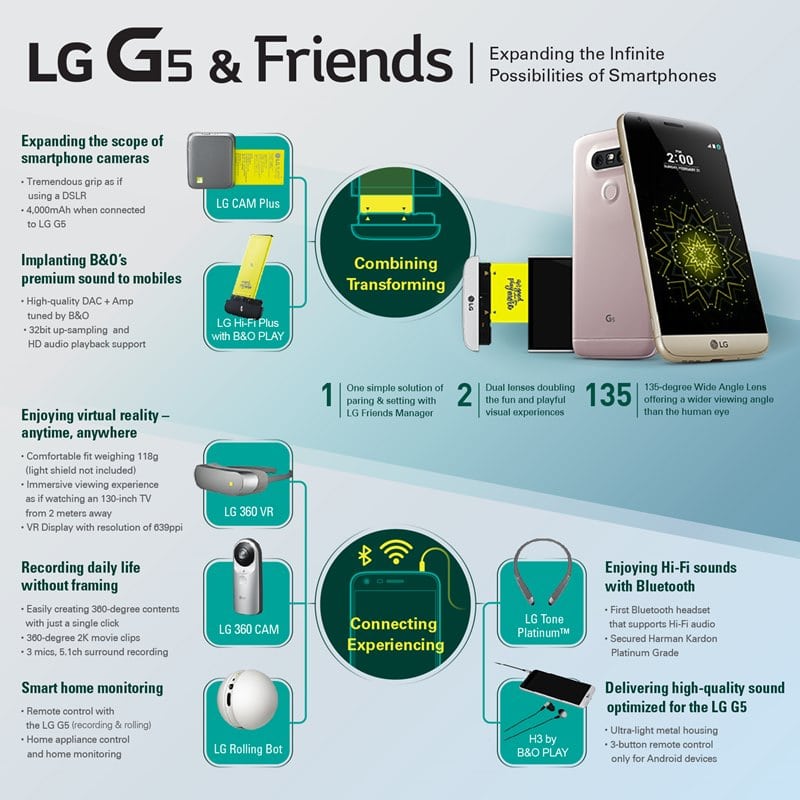 Perhaps the most exciting bit of the announcement relates to the G5’s modular-type design. The phone has a slide-out battery tray that doubles as an attachment point to a high-fidelity audio player for improved music playback or a camera grip, with physical controls for power, shutter release, and zoom. Besides allowing for easier use of the rear cameras (more on those in a bit), the grip provides a modest battery boost, courtesy of a 1,200mAh cell.

There’s more: a VR goggle that can be attached to the G5 using a dedicated cable; a compact 360-degree camera that records up to 2K video quality; and a companion drone (aptly named the LG Rolling Bot) that “rolls like a ball while capturing images and videos with its embedded 8-megapixel camera.” Think a BB-8 toy with promising applications for home monitoring. Sure, you’ll have to pony up more cash for those accessories, but it’s good to see LG thinking of ways to expand the capabilities of the G5, should you end up with one.

A display that stays on at all times

Previously, there was a rumor that the G5 will sport an always-on secondary display similar to the one found on the LG V10 for showing notifications and providing quick access to apps and contacts. It turns out there’s only one panel fronting the device, though LG has ingeniously found a way to leave the 5.3-inch Quad HD display on to show the time and date, even in sleep mode, and without using too much power.

We’re told the display only requires 0.8 percent of battery life per hour to keep part of the screen on. If you do the math, however, you’ll find that translates to losing out on up to 19 percent of smartphone usage over the course of a full day, which is a big ask for heavy users. Then again, the alternative, which involves powering the entire display to check the time and date, may just be as ill-advised.

As earlier leaks revealed, LG has fitted the G5 with not one, but two rear-facing cameras — one with a viewing angle that’s 1.7 times wider than those of existing smartphone cameras. The wider viewing angle should make it easier to keep an entire subject in the frame without moving too far away. The other camera module is a standard, 16-megapixel shooter that, at the very least, should prove to be equally competent as the one around the back of last year’s G4. The front-facer retains the same megapixel count as the G4’s: It uses an 8-megapixel sensor, which is par for the course for a 2016 model.

An Android powerhouse, as expected

Underneath its curvy, metal-clad exterior, the G5 is powered by a Qualcomm Snapdragon 820 system-on-a-chip, which LG says is up to 40 percent faster than the Snapdragon 810 at graphics work and up to 40 percent more power efficient. Qualcomm’s latest and most powerful chipset to date is also said to deliver the best possible VR experience on a mobile device. As for the other important stuff, there’s 4GB of RAM and 32GB of expandable storage, as well as the manufacturer’s own take on Android 6.0 Marshmallow. 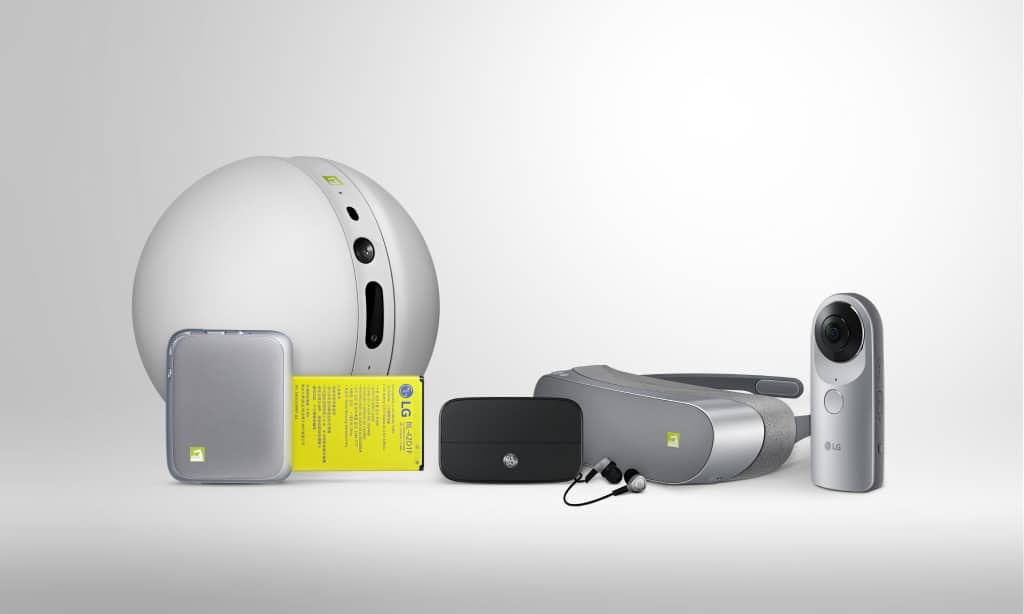 LG has yet to reveal how much the G5 will cost when it hits stores, but expect a global release sometime in April. If we had to guess, we’d probably say that it will retail between P32,000 and P34,000 locally, which is close to the price range of its predecessor and comparable devices from last year at launch.
Specs of the LG G5:
* Quad-core Qualcomm Snapdragon 820 CPU
* Adreno 530 GPU
* 4GB RAM
* 32GB internal storage
* microSD card slot (up to 2TB)
* 5.3-inch IPS display (1,440 x 2,560 resolution)
* 16-megapixel standard rear camera, 8-megapixel, wide-angle rear camera
* 8-megapixel front camera
* 2,800mAh removable battery
* Android 6.0 Marshmallow
[irp posts=”2526″ name=”LG G5 Unboxing”]
Related Topics:LG G5MWC 2016smartphones

END_OF_DOCUMENT_TOKEN_TO_BE_REPLACED

Specs-wise the new Xperia X line isn’t going to be the most high end smartphone release of 2016 but Sony’s left just enough for the phones to be desirable. END_OF_DOCUMENT_TOKEN_TO_BE_REPLACED