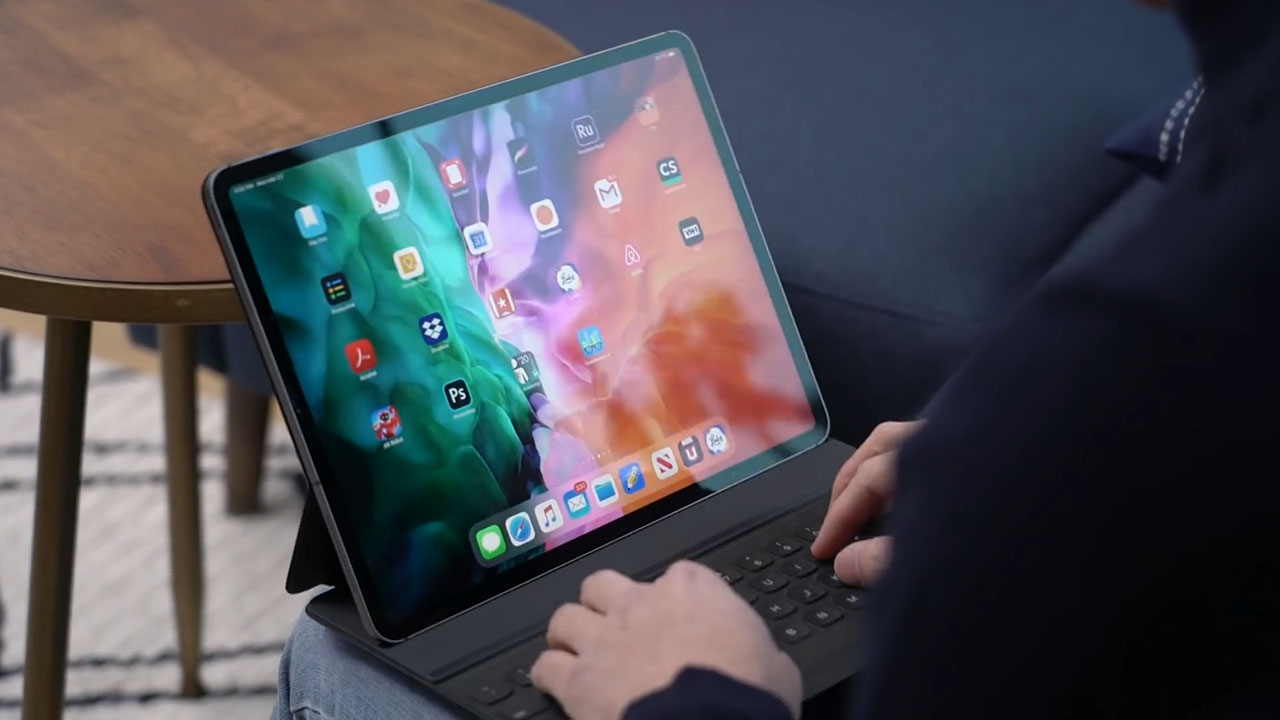 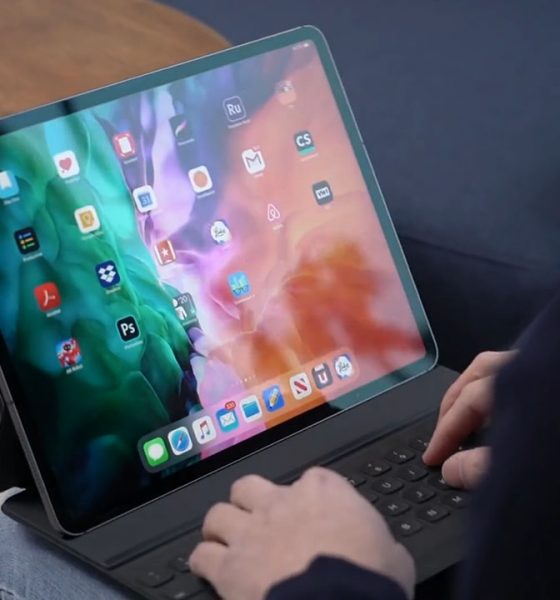 Is it a good laptop replacement?

The new iPad Pro is more powerful, has a high tech sensor for AR, works with a mouse and trackpad — there’s even a Magic Keyboard. With all these new features, is it good enough to replace your laptop? 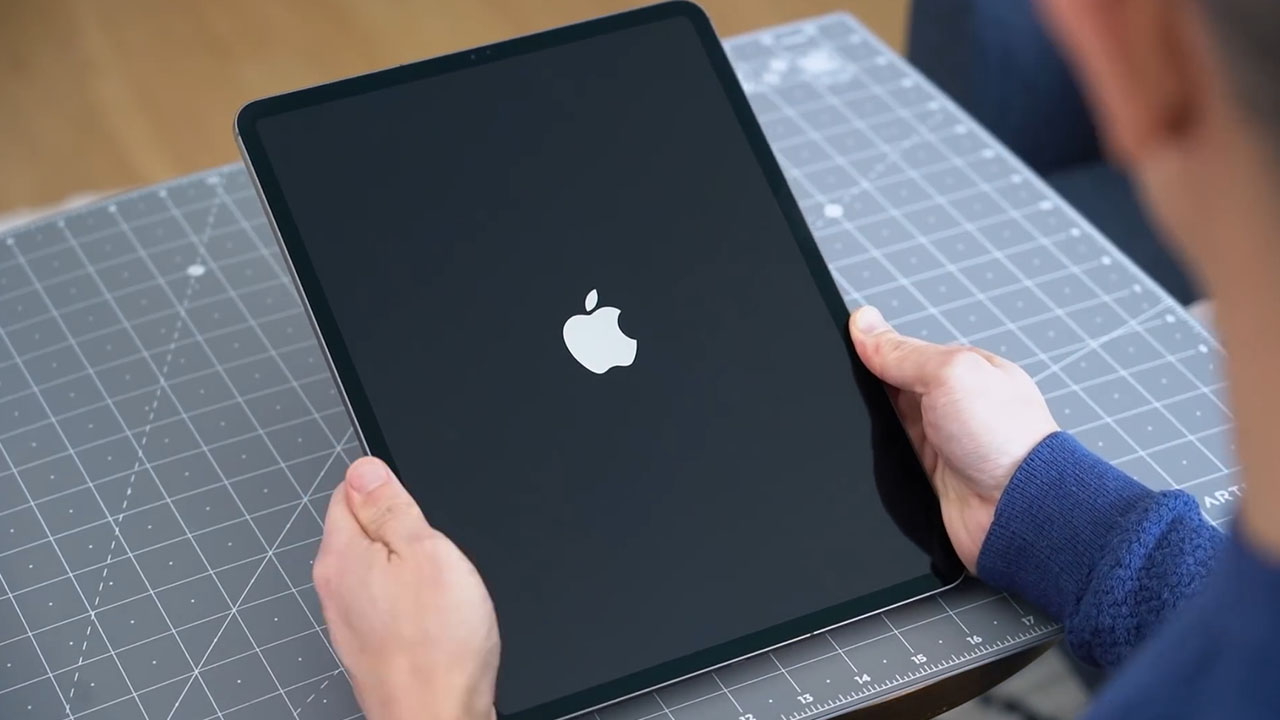 This is officially the fourth generation iPad Pro — following the announcements in 2015, 2017, and most recently 2018, where Apple first debuted this form factor.

It comes in two sizes: 12.9 and 11 inches. Its camera bump is now similar to the iPhone 11 — squarish with two rear cameras, a first on the iPad. 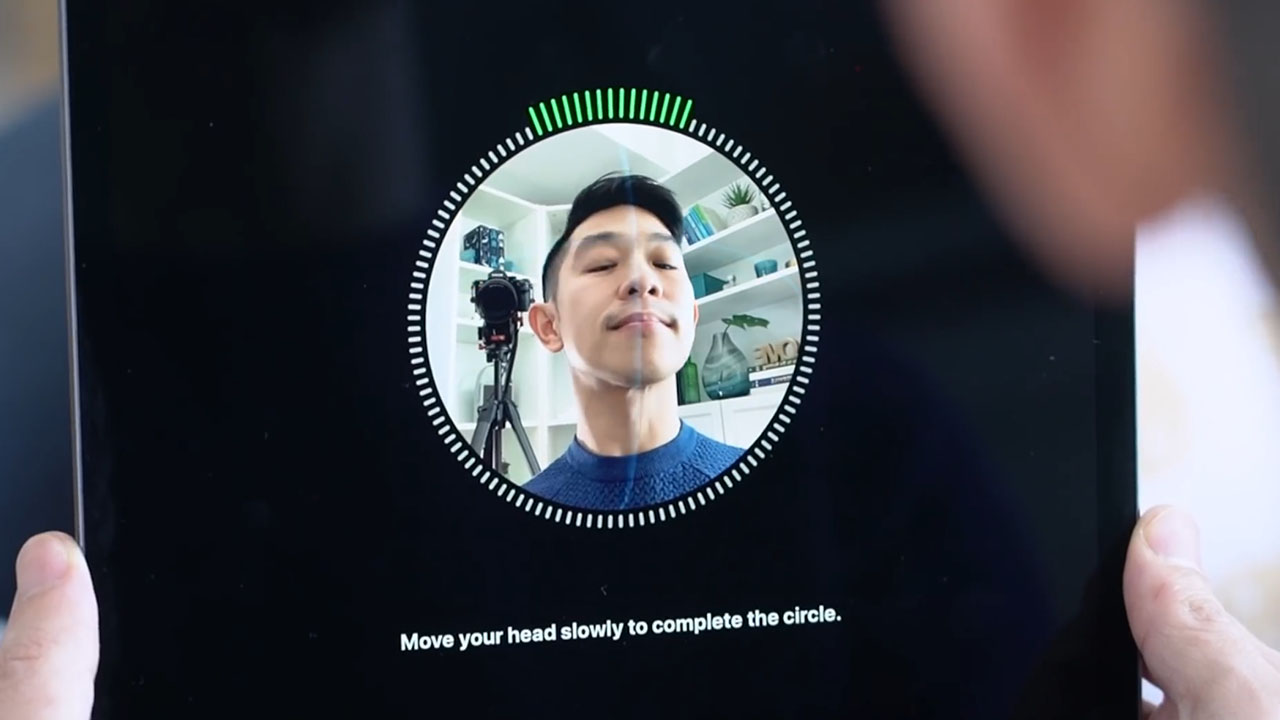 Like the 2018 model, this iPad Pro comes with Face ID as its biometric security option.

How much better is it than the 2018 model? On the outside, there’s only the camera bump to tell both models apart. Button, port, and speaker arrangements are all the same; even the dimensions are the same. It also comes with the same 1 meter long USB-C cable, and 18W charging brick. 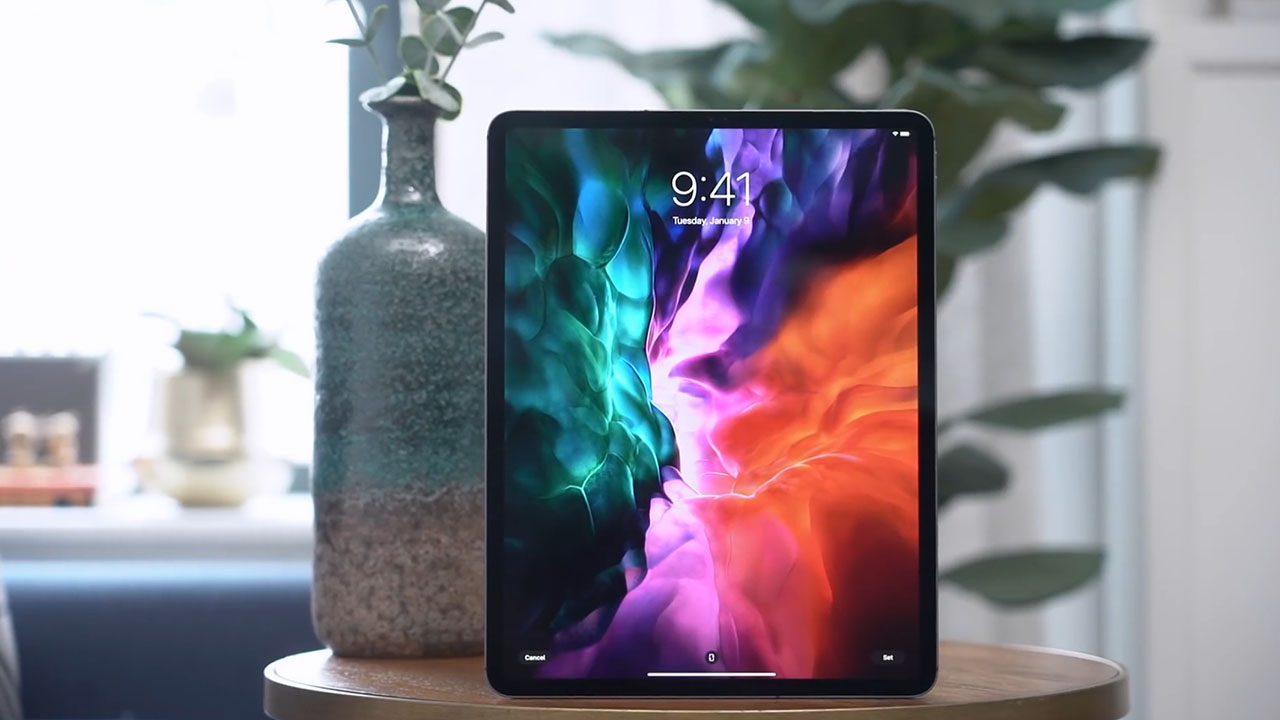 As with most Apple updates, it’s what’s on the inside that matters. There’s a new A12Z Bionic Chip which is much more powerful than the 2018 model.

While we don’t usually do benchmark tests, this new chip scored higher than the previous model in both CPU and GPU tests.

The new iPad Pro now has a 10 MP ultra wide angle camera to go alongside its 12MP wide camera. 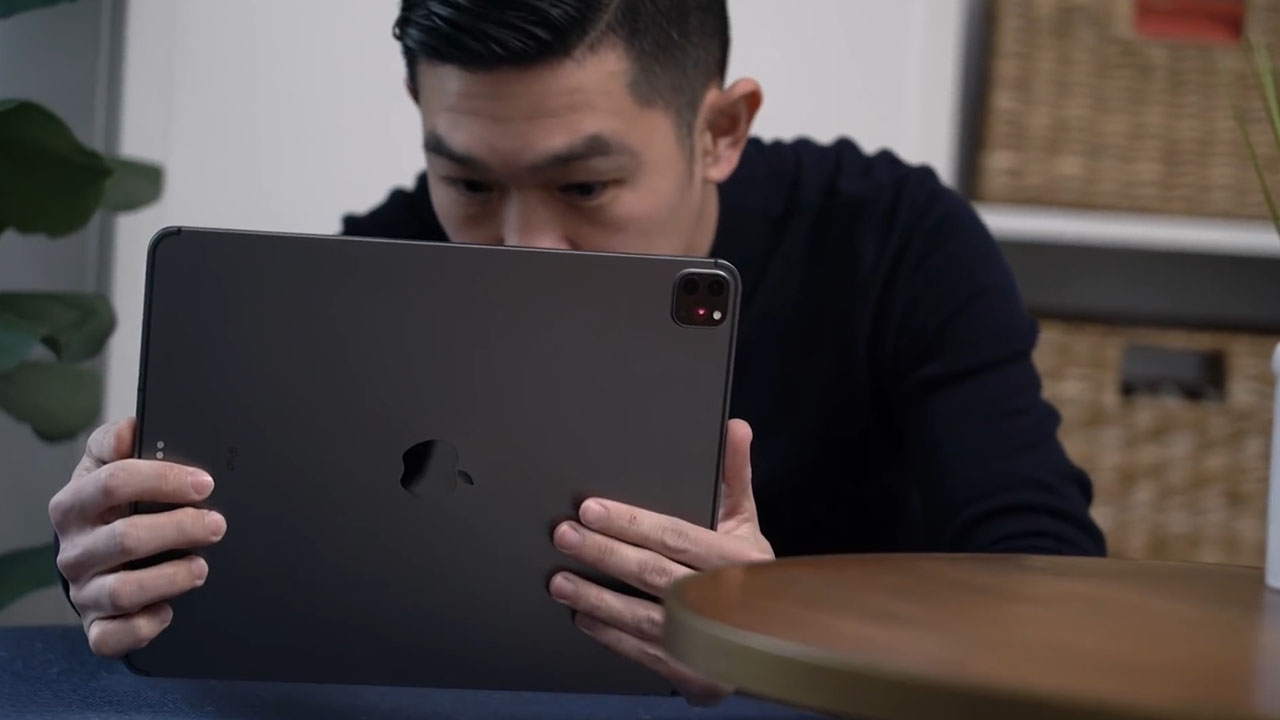 I understand tablet photography is often frowned upon, but Apple really sees the iPad Pro as a device for content creators like me. Aside from being able to to edit entire videos on apps like Luma Fusion, Apple wants the iPad Pro to also be a device you can use for video capture.

Both cameras shoot 4K video, and just like on the MacBook Pro, it’s got 5 studio microphones built in. 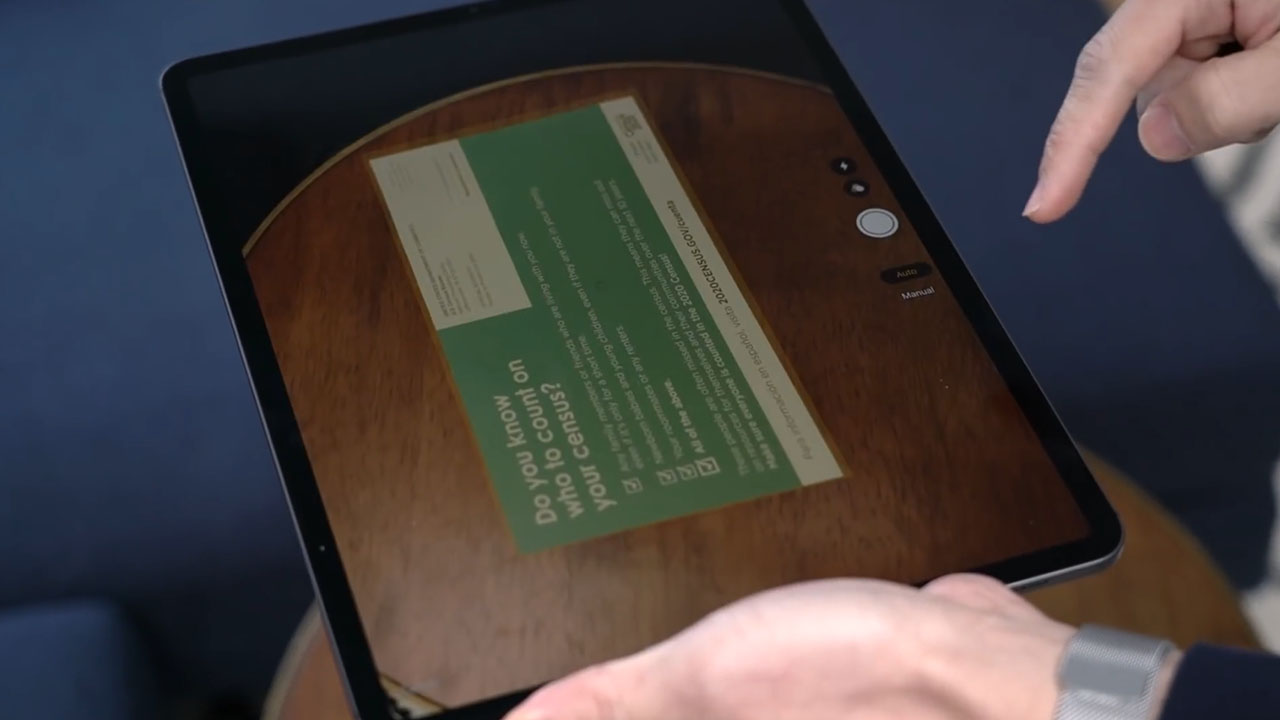 That ultra wide angle camera also comes in handy when you’re scanning in documents, which the iPad is great for especially if you need to make annotations — the Apple Pencil is made for that.

Reps from Apple also tell me that the cameras work in conjunction with the new LiDAR scanner that’s built into the device. LiDAR stands for Light Detection and Ranging. If you’ve heard of it before it’s probably in relation to self-driving cars where the technology is also used. 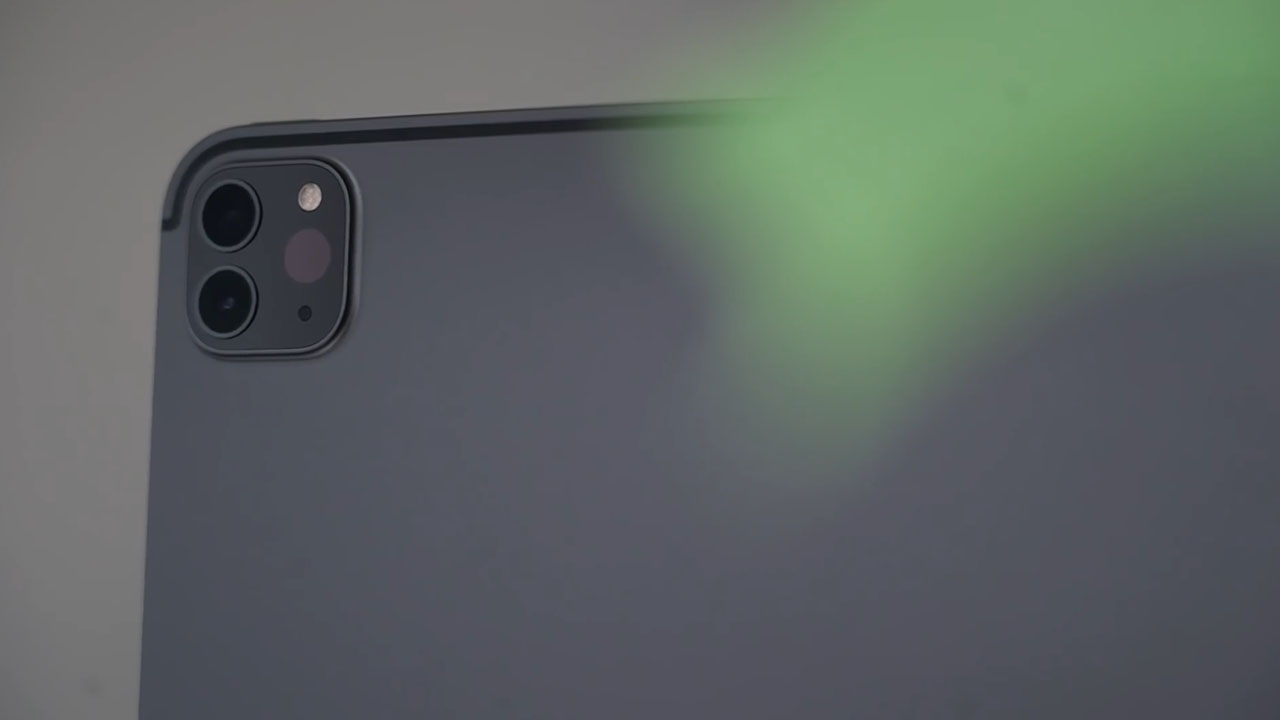 LiDAR works by sending beams of light at your surroundings and creates a map of objects in the space around you by measuring the time it takes for the light beams to bounce back.

The new LiDAR scanner is meant to elevate the augmented reality experience on the device, which Apple is committed to making a reality, pun intended. 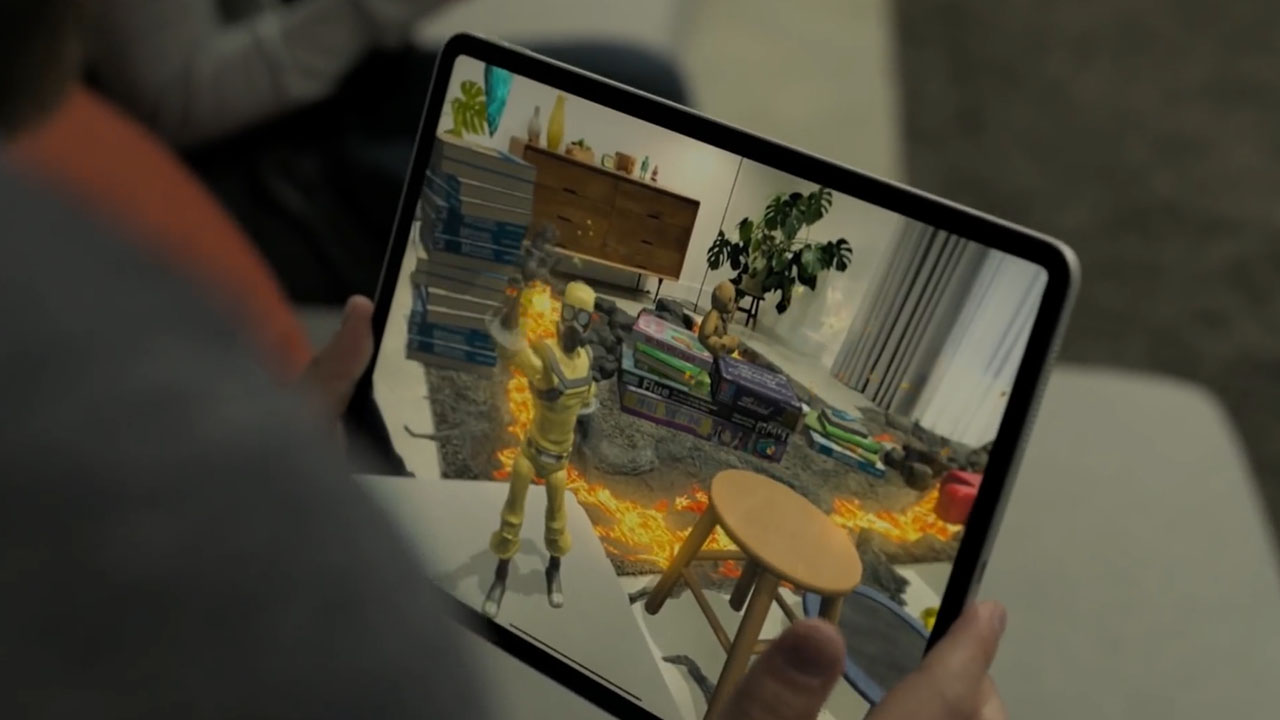 One great example of this is the upcoming AR game Hot Lava. With LiDAR technology, the iPad Pro is able to accurately detect objects in a room, that in-game elements can interact with them — including humans in the scene.

The IKEA app which I used a lot while designing my apartment is also getting an update. It will soon be able to recommend matching furniture or accessories based on what you currently have.

There are scientific applications, too, like the Complete Anatomy App that uses Lidar to measure the range of motion of someone’s arm in real time.

With LiDAR, it’s also easier to set up AR applications. Previously you needed to scan your surrounding by moving your device around.  Now you just launch the AR app to start. 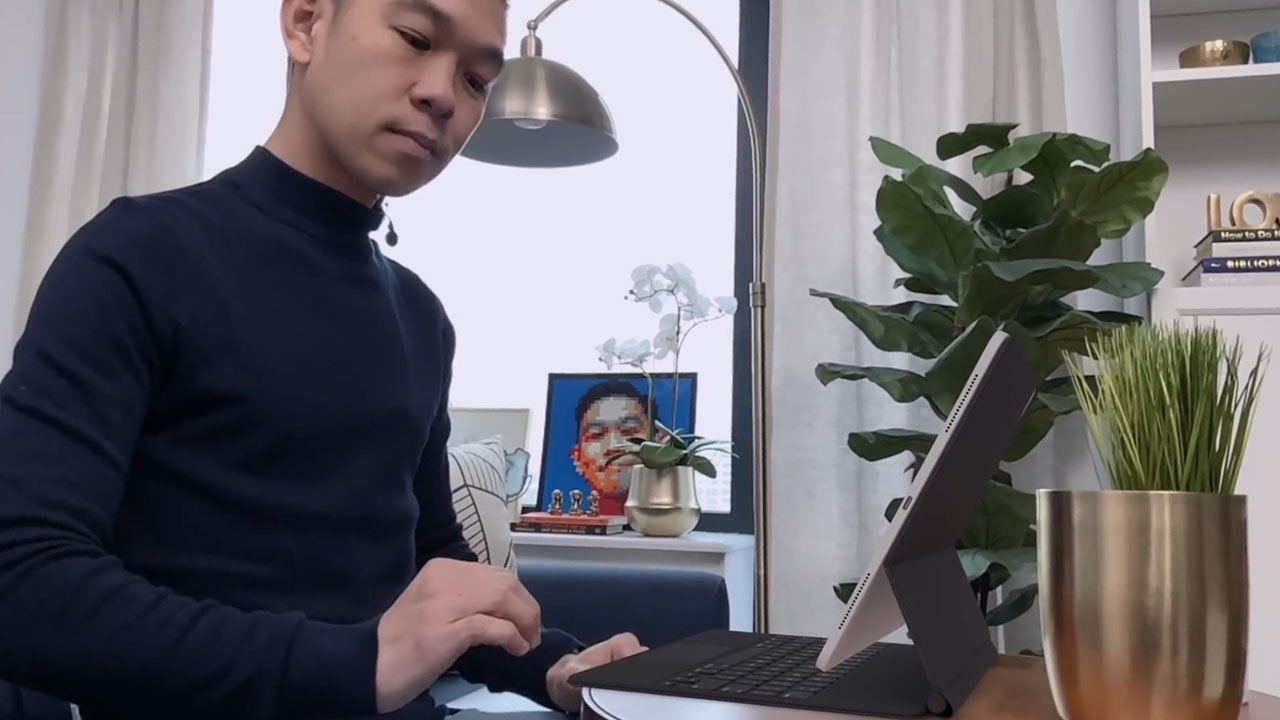 With the Magic Keyboard, the iPad Pro gets elevated, giving it an iMac-esque feel.  The elevated display means you don’t have to look down as much.

Built into the hinge is a USB-C port so that you can keep your iPad charged while in use. The hinge is sturdy enough to keep the iPad Pro propped up at all times.

I think what makes the Magic Keyboard even more exciting though is the built in trackpad. iPad OS 13.4 brings this functionality to the iPad. 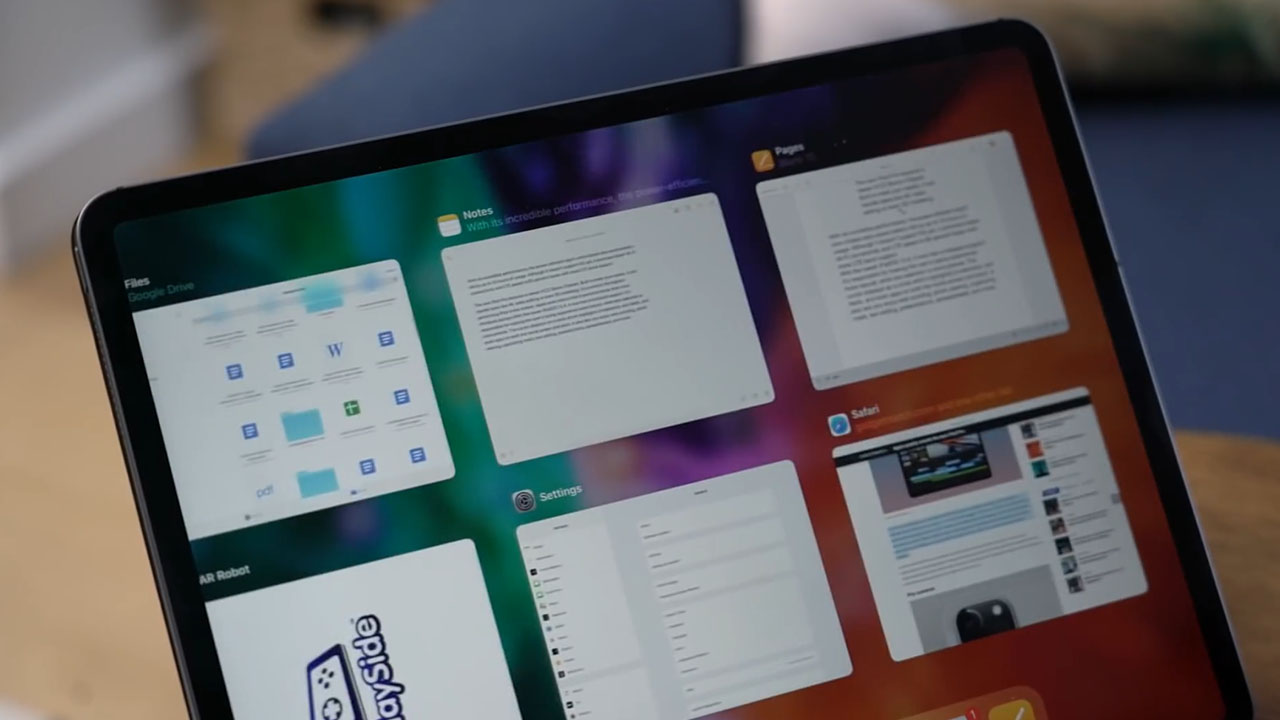 Swipe gestures work just like on the Mac: swipe up with four fingers to see all your open apps, scroll down with two fingers to scroll through web pages. It works just like on a computer just reimagined for a touch screen device. 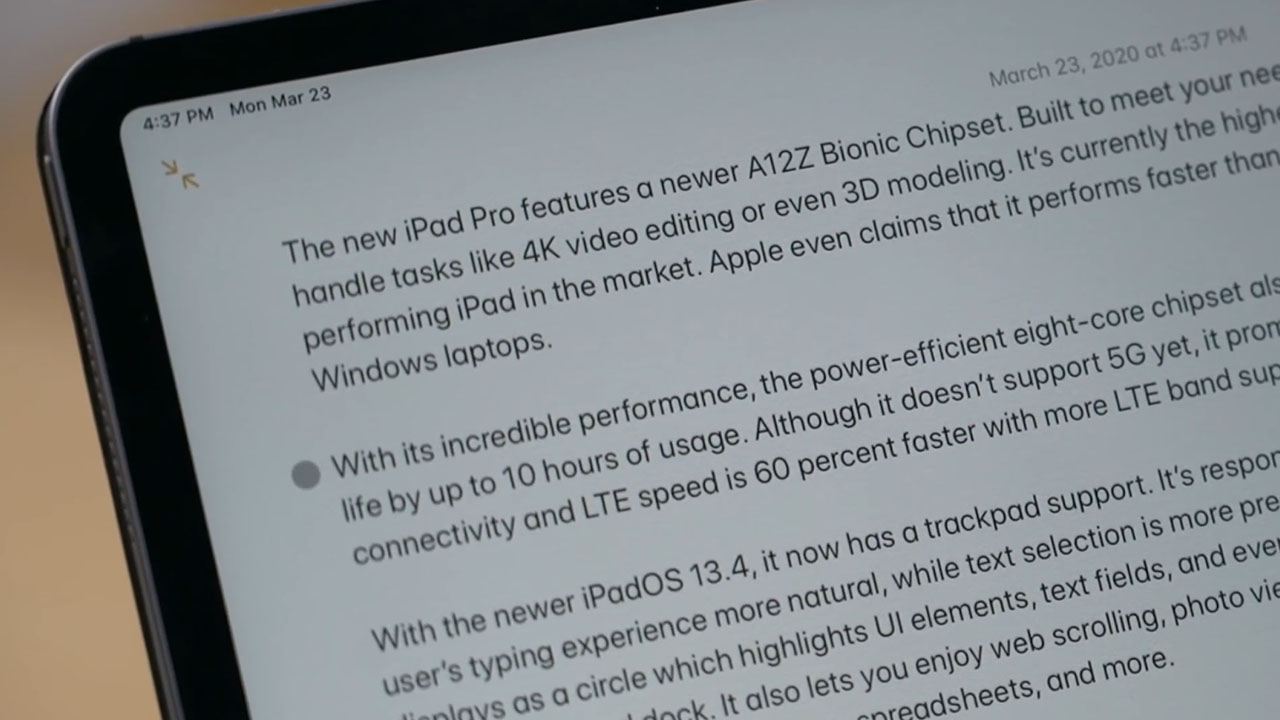 On the screen, instead of a pointer you’ll see a circle instead. When you hover over menu items they get highlighted to indicate they’re being selected.

It transforms into a vertical bar when you’re highlighting text. You can easily copy text like you would with a right click or a two-finger tap. 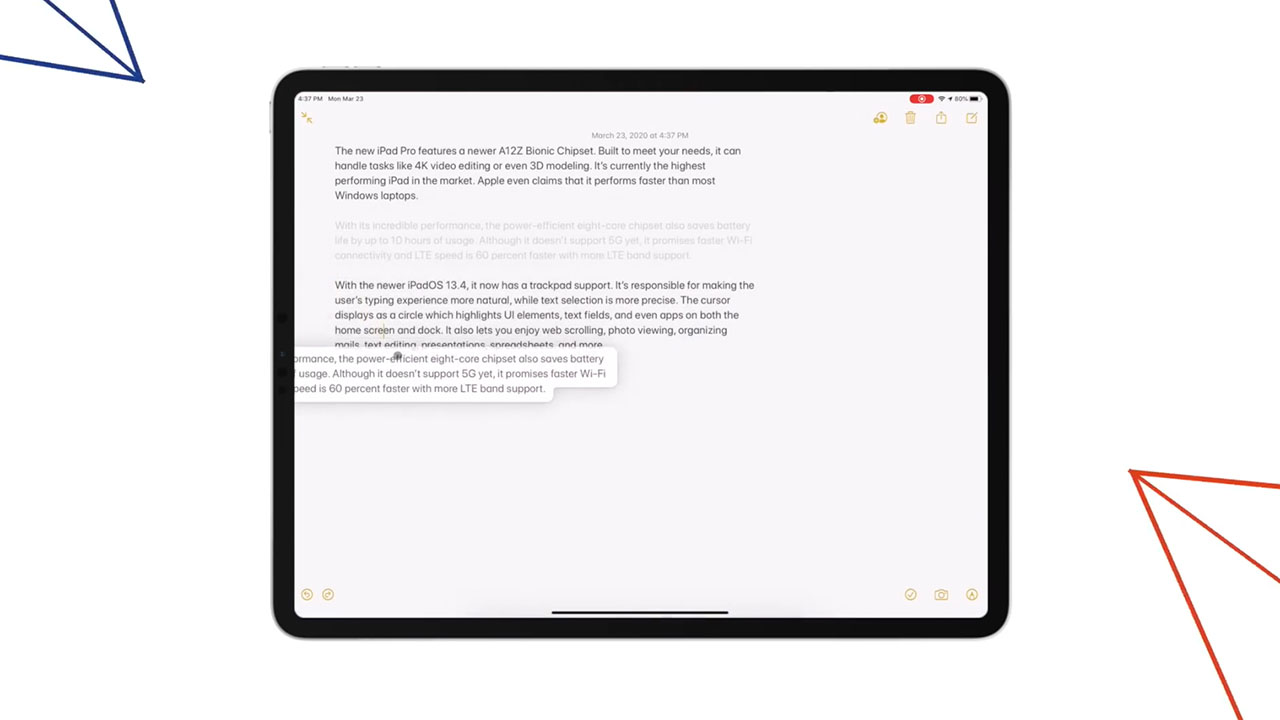 If you’re editing a long document, you can also move entire blocks of text by simply dragging them. It’s the same thing if you’re using a mouse. Third party mice work, too.

While we’re on the topic, mouse and trackpad support isn’t exclusive to the new iPad Pro. All iPads that will get this update support this functionality. The Magic Keyboard will also work with the 2018 iPad Pro.

Another question I get a lot is whether it’s good enough to be an alternative to the MacBook Air? Is it powerful enough? Is it just an oversized iPhone?

With this latest iPadOS update, the iPad encroaches more on Mac territory. Having said that, these are still two different kinds of devices. 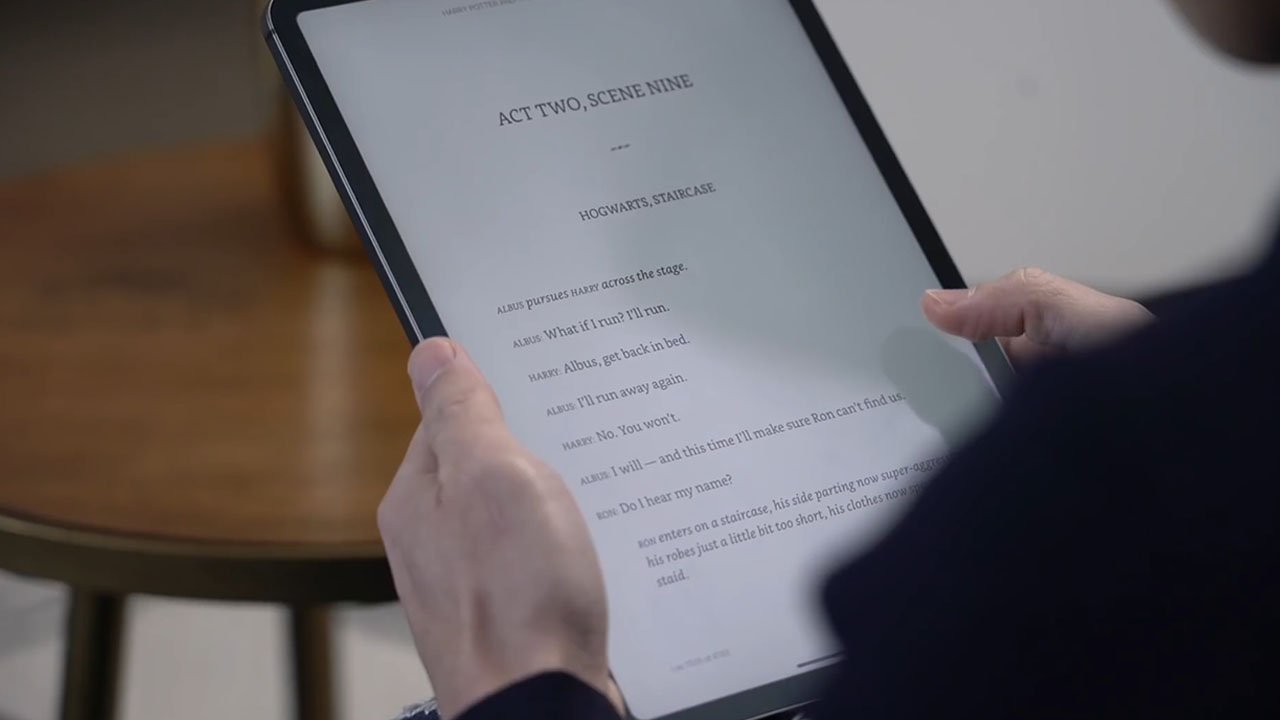 The iPad Pro is still a tablet so it’s a great device for reading books or magazines, not to mention watching videos on a plane especially when you’re flying economy.

It has a touch screen display, which means apps built for the iPad are optimized for touch, and in some cases that makes more sense. 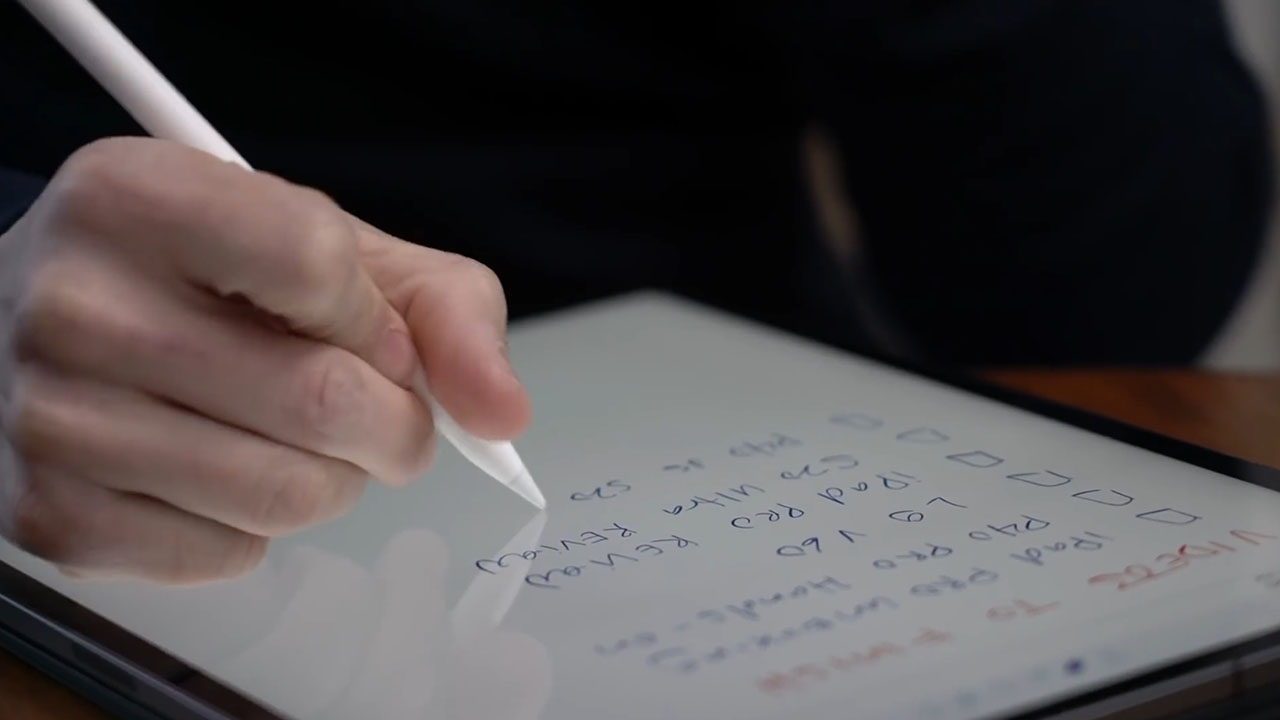 It also has pen support making it a great device for taking notes the old way, or sketching and drawing.

It’s thinner and lighter. I love the portability of the iPad and love how I can squeeze my 11-inch iPad into my man bag, which is not something I can do with my MacBook Air. 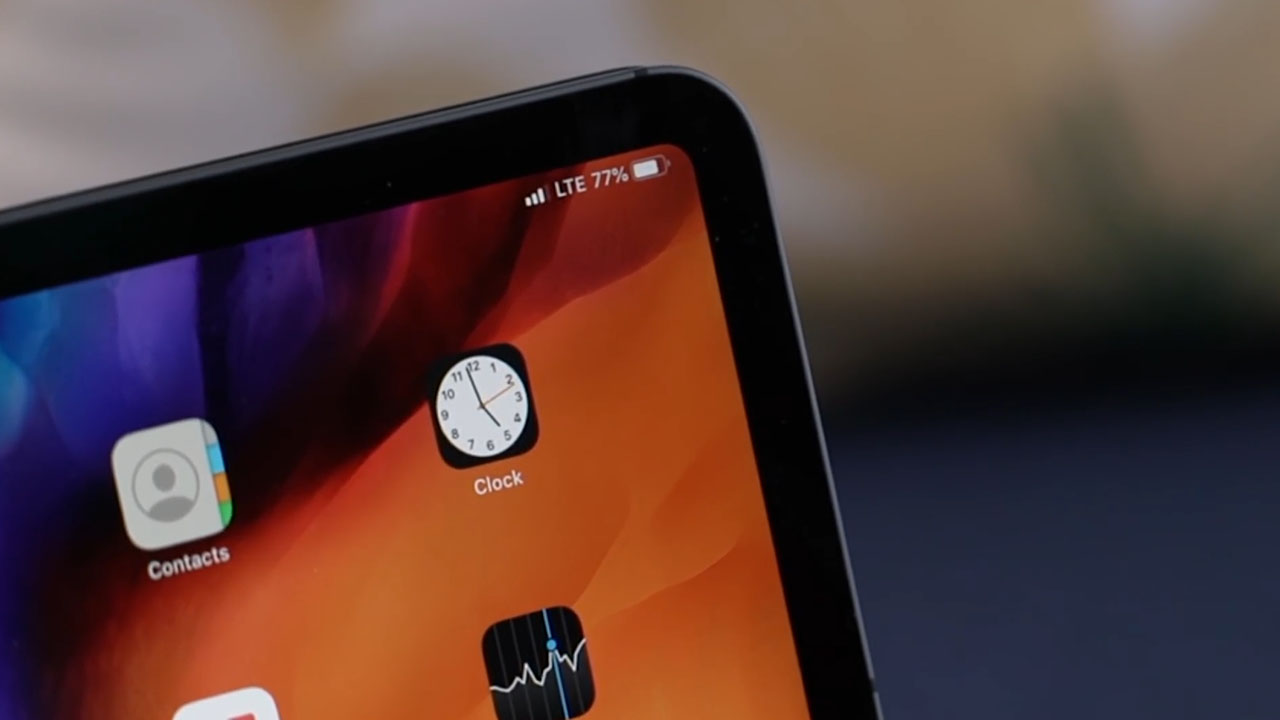 As a creator having the two cameras on its back are a plus too. If you get the cellular model, that also means you can have internet connectivity everywhere you go.

If we’re being literal, balancing the Smart Keyboard Folio or Magic Keyboard on my lap is not as easy as the MacBook Air for example. In that sense, it doesn’t make a good laptop replacement.

The iPad Pro also isn’t necessarily cheaper than a Mac so you don’t buy it to save money. All this extra functionality I just talked about, you pay for.

The cheapest MacBook Air starts at US$ 999. The cheapest iPad Pro with the Smart Keyboard Folio and Apple Pencil will cost you at least US$ 1,107. 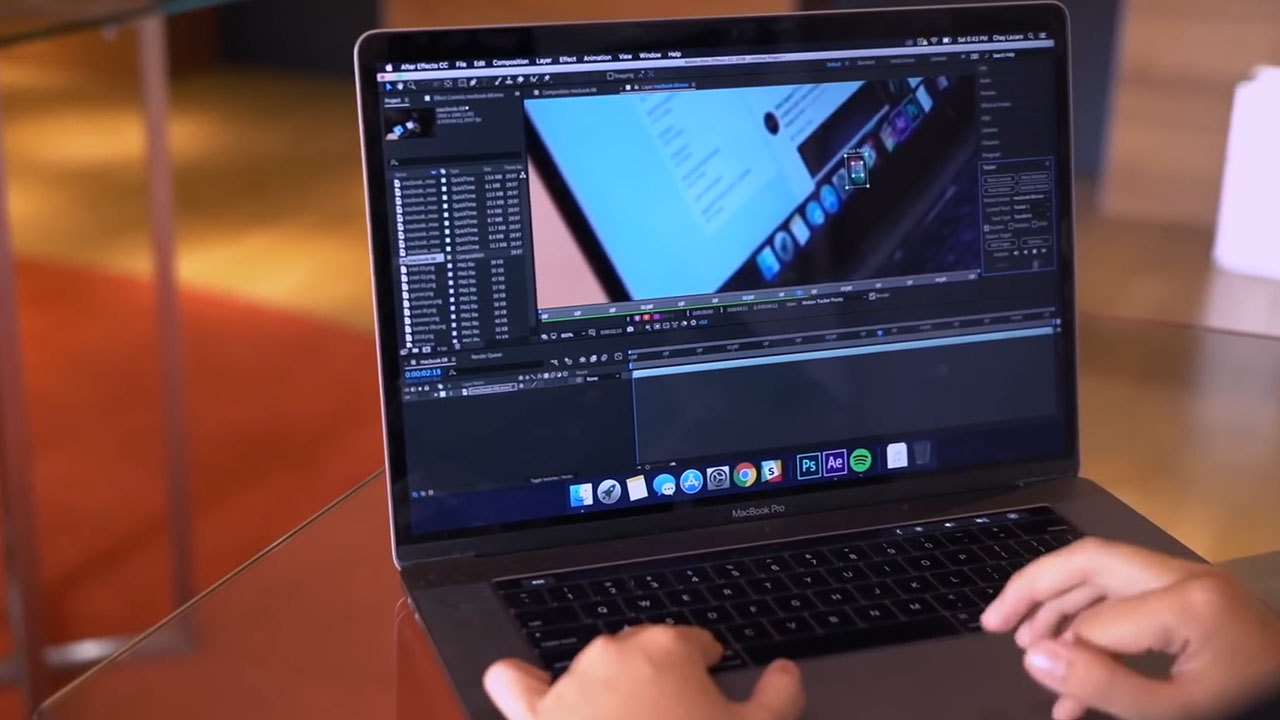 Ask yourselves which apps you use on a daily basis. If you edit on Final Cut Pro or Adobe Premier for example, you’re stuck with the Mac. The Mac is also better at file management.

If these aren’t things you need and you’re lured by pen support and portability, then go for the iPad Pro. 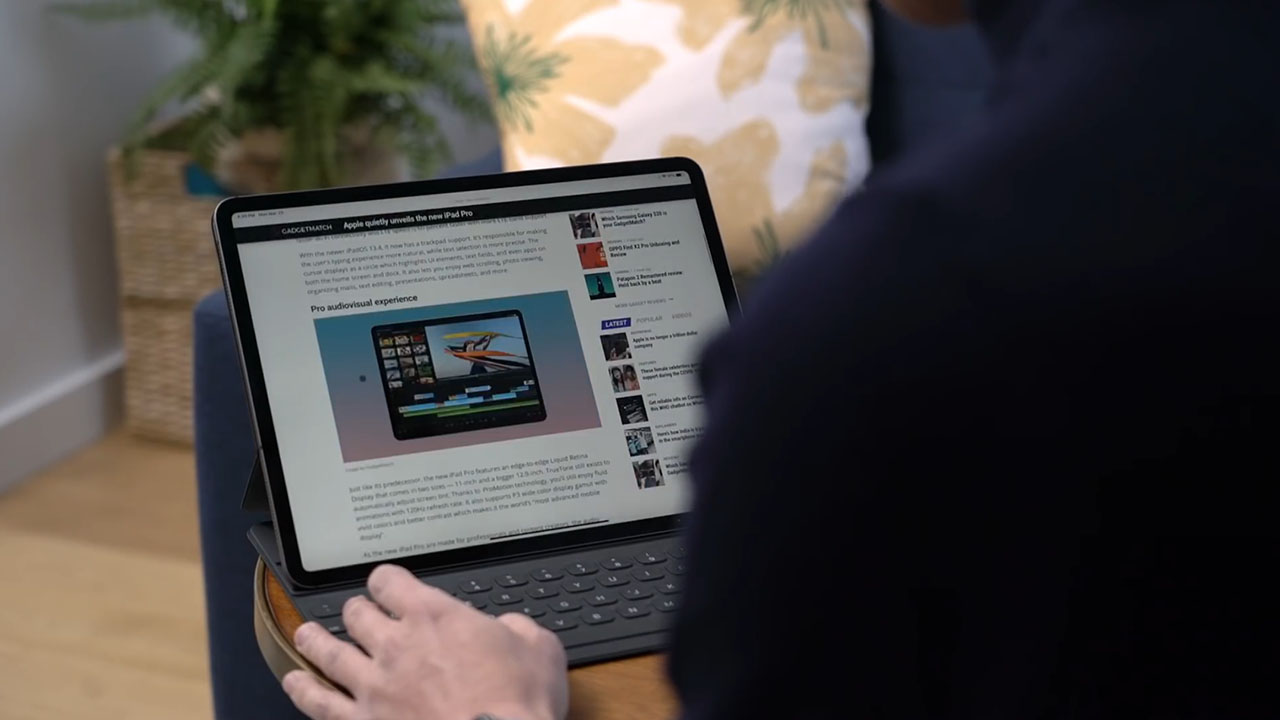 I want to correct the impression that you can’t get desktop browsing experiences on an iPad.

Since iPadOS 13, a desktop version of Safari has been included so things like Google Docs and WordPress work just fine.

Is the iPad Pro your GadgetMatch?

If you follow me on social media, you’ll know that starting with the 2018 model, the iPad Pro has been one of my most favorite devices of all time — apart from my iPhone that is.

I just love it. I love all the things that I can do on it, and I love the portability that it allows. 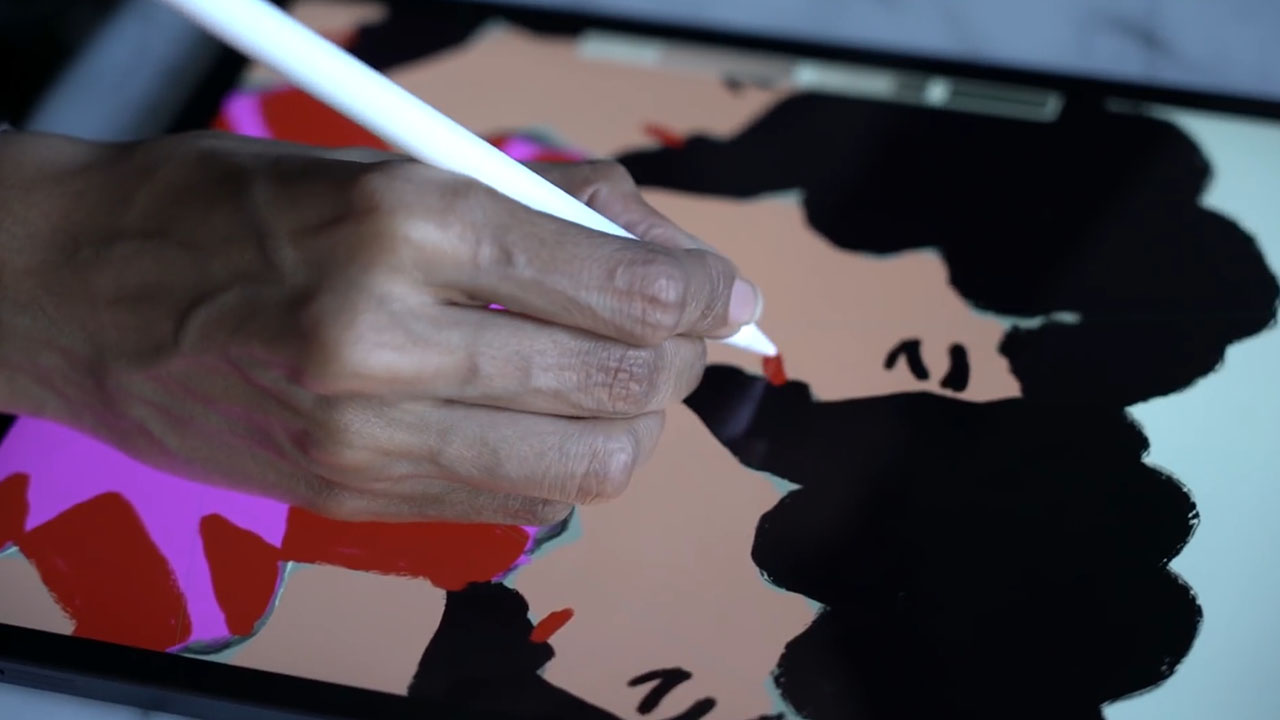 Is it for everyone? As its Pro branding suggests, this is a device for those who have more specialized needs. Those who need more power for things like photo or video editing, for professional illustrators and artists. It’s perfect for creators on the go. 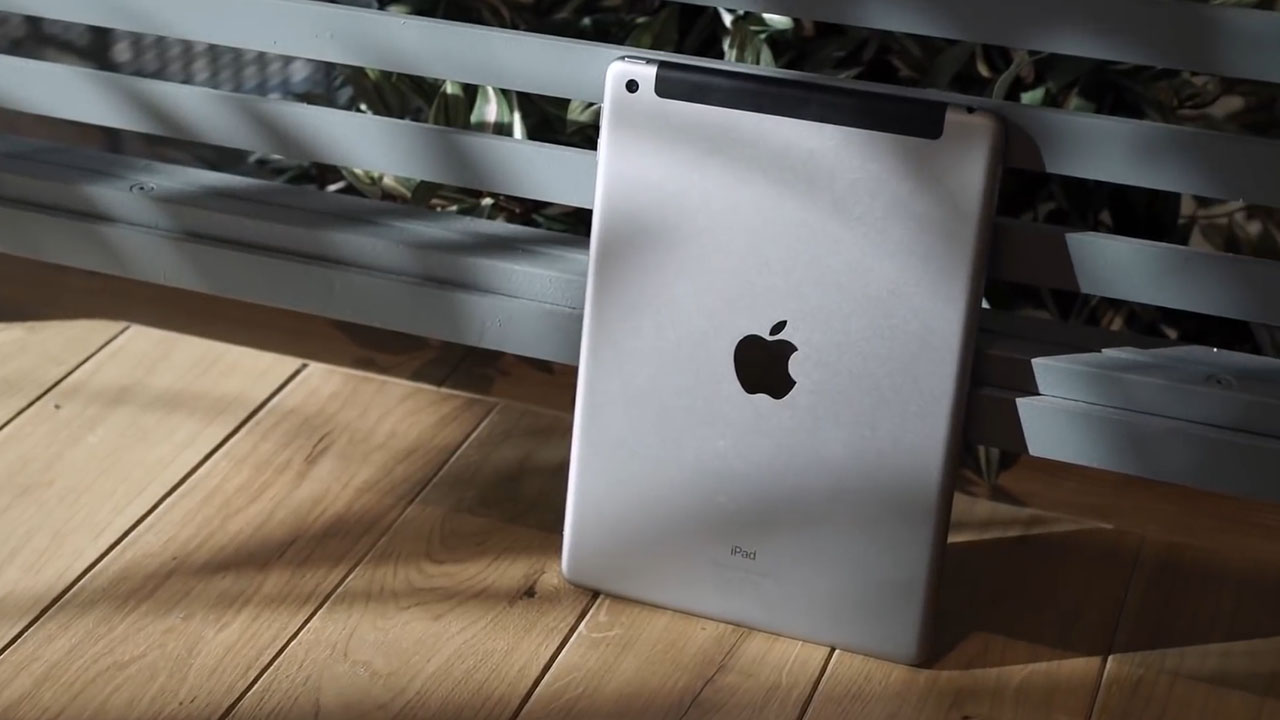 If you just need an iPad for surfing the web, or taking notes, watching videos or playing games, Apple makes many capable iPads that you can get for less.

Should you get the 2018 model instead? The answer really depends on what you plan on using the new iPad for and how big of a discount you should get.

If you plan on using it for things like video editing, take advantage of the newer more powerful processor. Also remember iPad Pro updates come every 2 years.

It’s also great for students, but because of its price tag I think you’re better off getting the iPad or iPad Air. They will do the job as well. 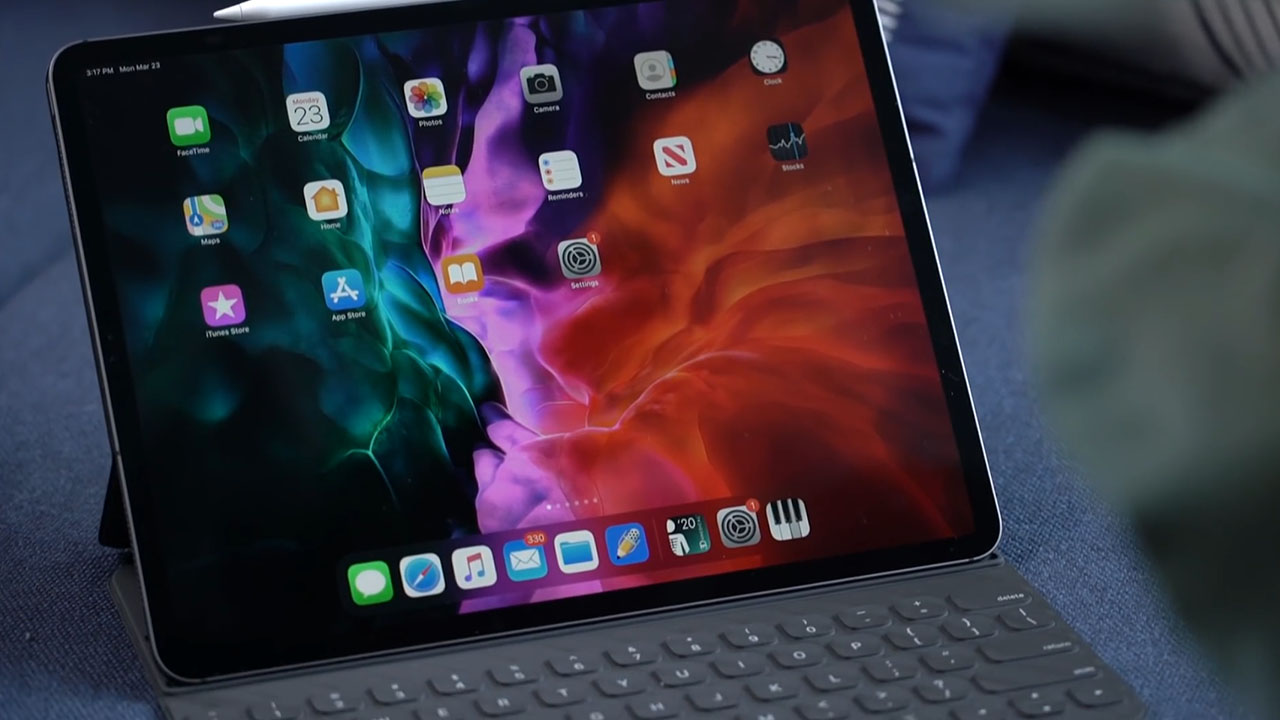 Is it a laptop replacement? It’s not, and Apple is clear that that isn’t the point here.  It’s about having different kinds of devices that match what it is you’re trying to do. If I were to paraphrase, it’s to make sure each kind of user has his or her own GadgetMatch, even if the line between the iPad and Mac is now blurrier than ever.

One thing I’ll say is this: While tablets continue to struggle to find relevance, there’s still plenty of reasons to get an iPad.