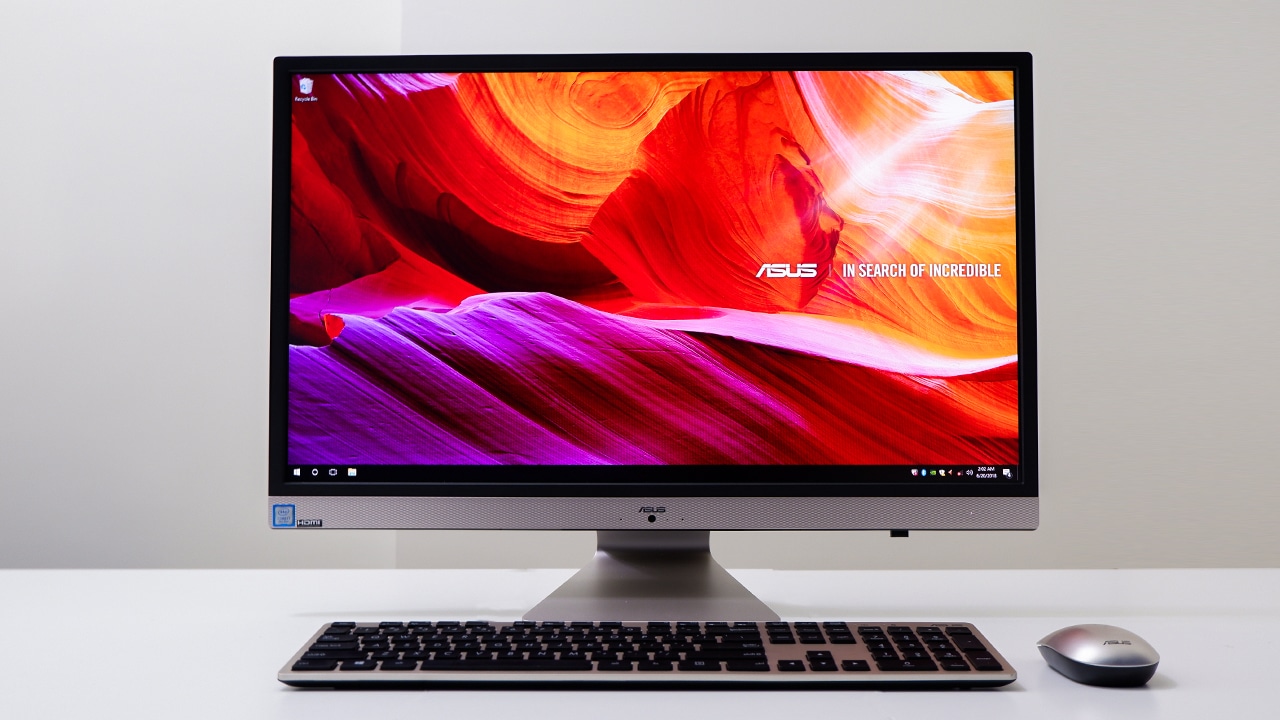 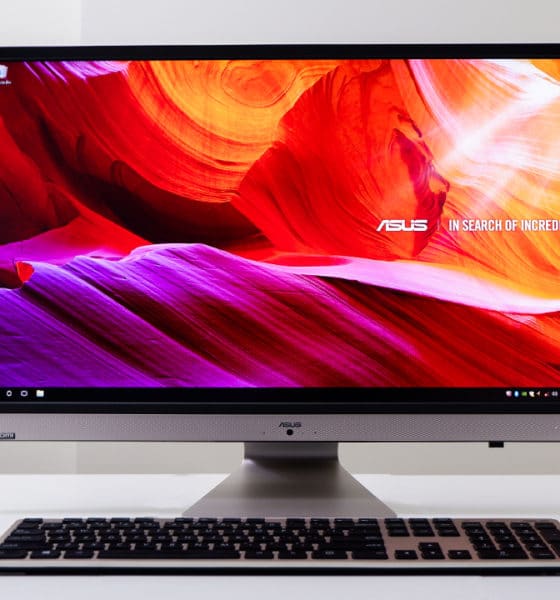 As a person who builds his own desktop computers and thrives on portable laptops for his on-the-go lifestyle, I admit there are times I just want a PC that can do it all — minus all the hassle of plugging accessories in and finding wall sockets for charging.

That’s exactly what an all-in-one computer aims to do, and the ASUS Vivo AiO is the latest example.

Much like the Zen AiO Pro I reviewed last year, this model only needs a single power cable to get things running. Everything else is already built in or simply wireless. Now, that’s convenience!

Here’s what it can do

Make no mistake about it: This AiO PC is quite big. With a 27-inch LCD on its adjustable base, it takes some effort to take this 8.5kg computer out of its box and setting it on a table. From there, however, the rest of the setup becomes pleasantly easy.

All you have to do is plug in the power cable, insert the wireless keyboard and mouse’s dongle into an open USB port, and you’re all set! Powering the unit on happens by pressing a somewhat hidden button at the back of the display. 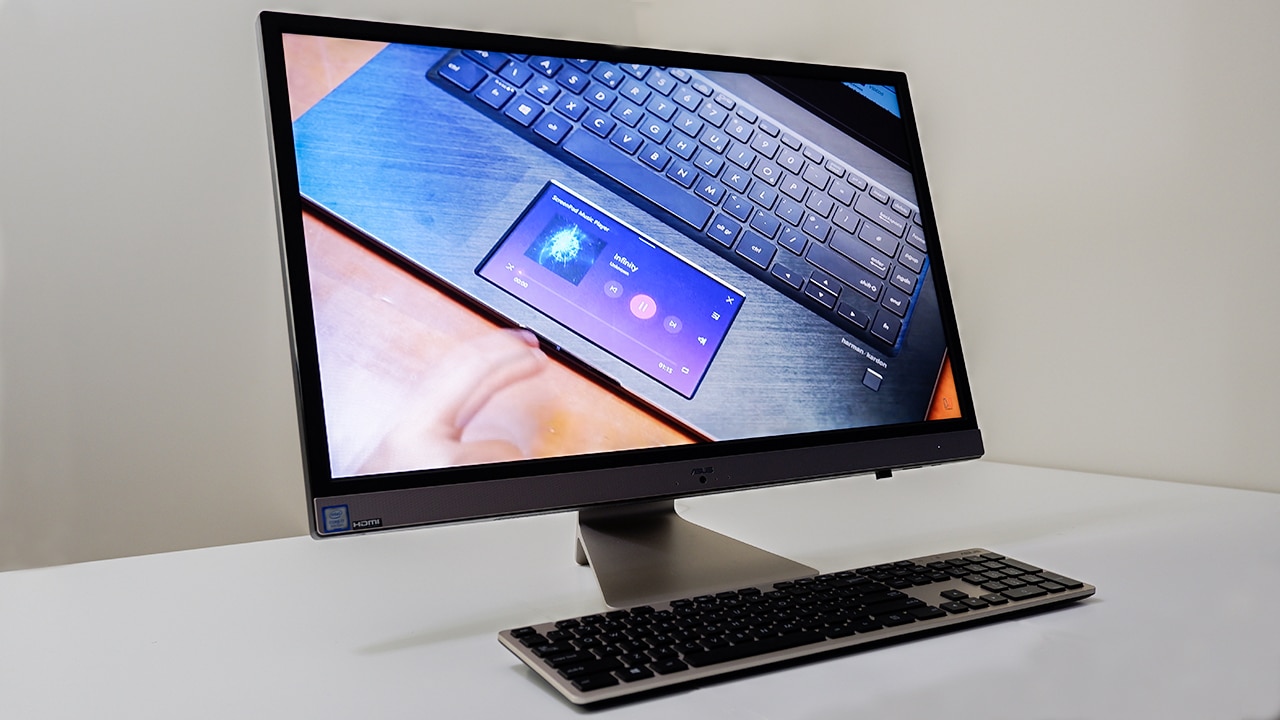 You’ll then be greeted by a 1920 x 1080-pixel resolution, which isn’t that dense for a 27-inch panel, but it does allow the system to run more smoothly since fewer pixels have to be pushed at a given time. ASUS claims it has a 100 percent sRGB color gamut, which is great for editing photos and videos more accurately.

Some variants of the Vivo AiO come with a touchscreen. This is kinda unusual to have on a desktop computer, but if it’s already there, then why not, right? Still, I would stick to using the keyboard and mouse, and leave the touch gestures to your laptop or smartphone.

I’m saying this because the bundled wireless mouse and keyboard are actually quite good. While not mechanical or gaming-optimized in any sense, they’re ergonomic and work well on all sorts of surfaces with no noticeable input lag. 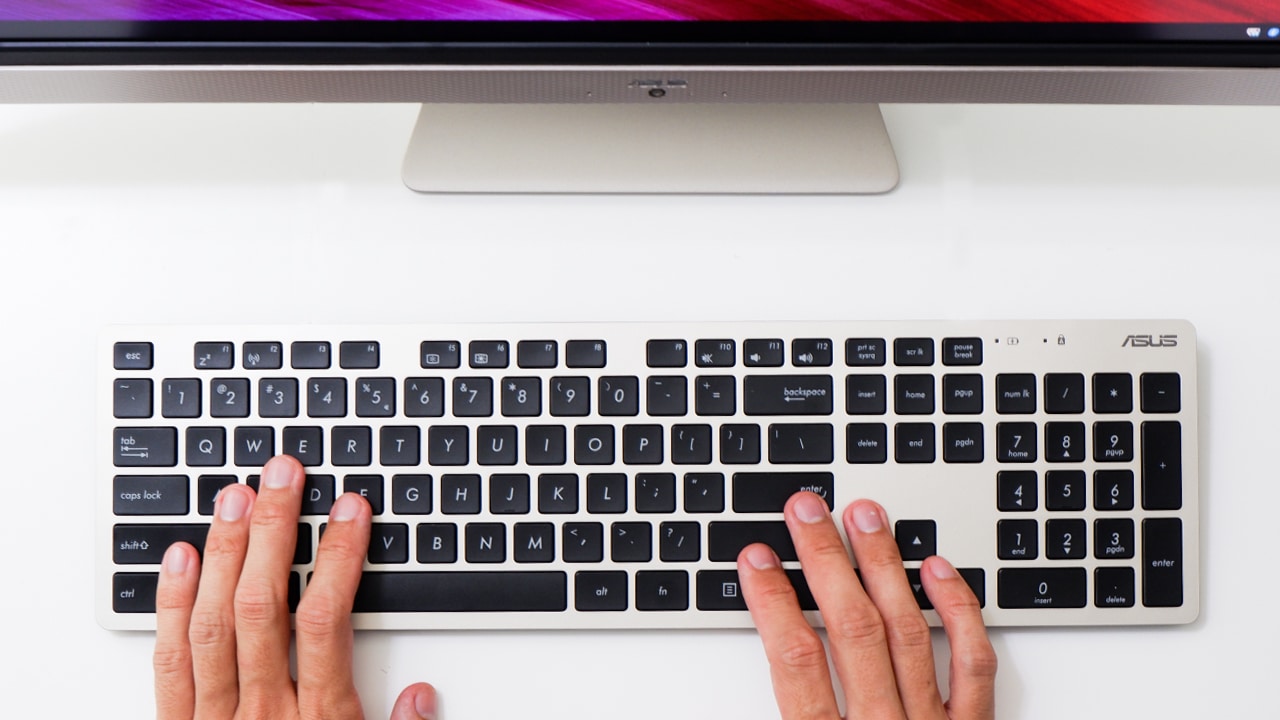 Despite having everything in one solid piece, there are enough ports to go around.

Underneath the display, you get a single USB port, which I found to be a perfect spot to plug in the keyboard-mouse receiver, as well as a 3.5mm audio port for your headphones or external speakers. 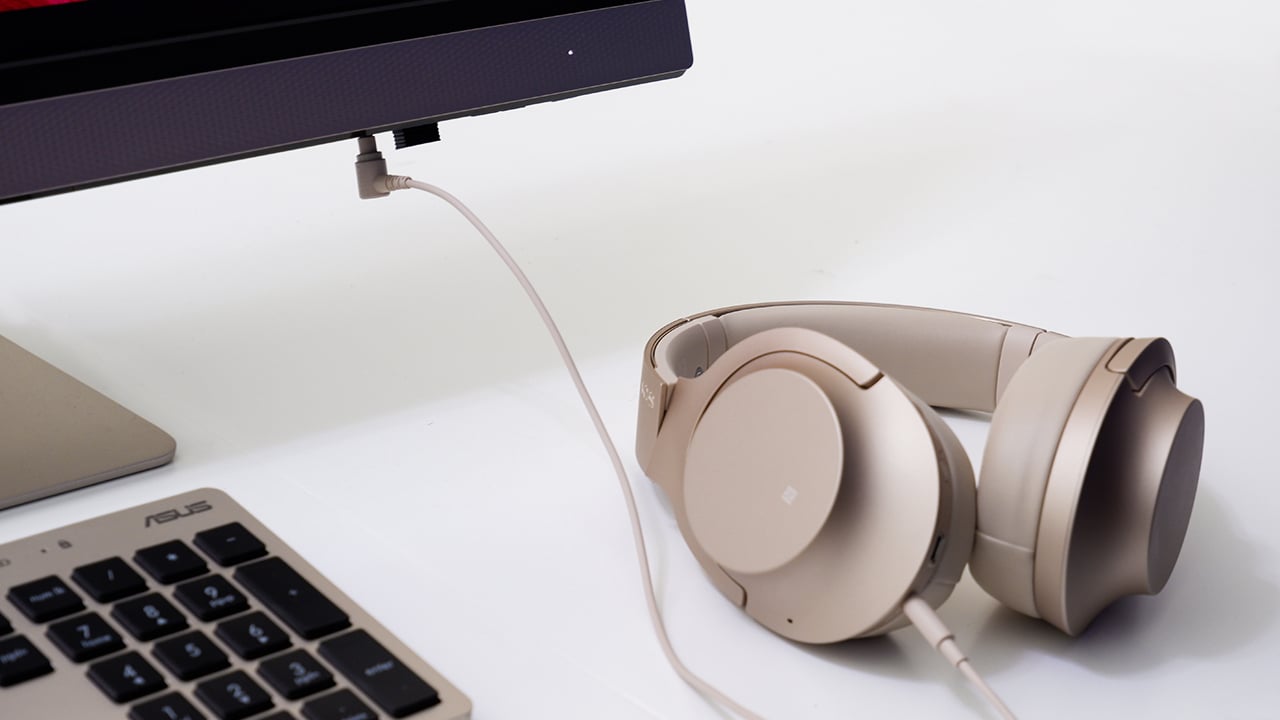 At the back is a decent selection of ports, from USB 3.1 to HDMI and Ethernet. The only head-scratching omission is USB-C, which is becoming increasingly common on smartphones and thin notebooks. Even ASUS’ own phones and laptops are committed to the port, so it’s strange to see it missing here. 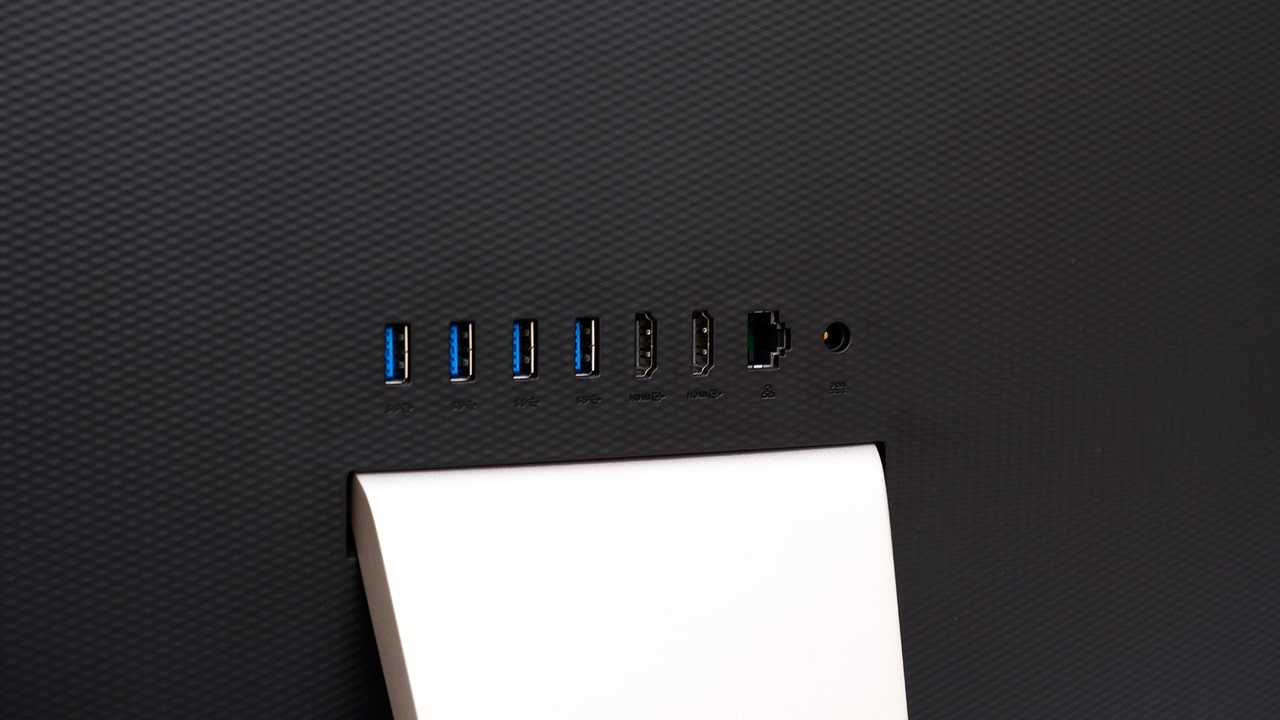 Design-wise, my main complaint is the location of the webcam. It’s situated on the bottom bezel, allowing it to look up your nose during video calls. ASUS brags about the display’s 81 percent screen-to-body ratio, but I would’ve been fine with some bezel up top to house the front camera instead. 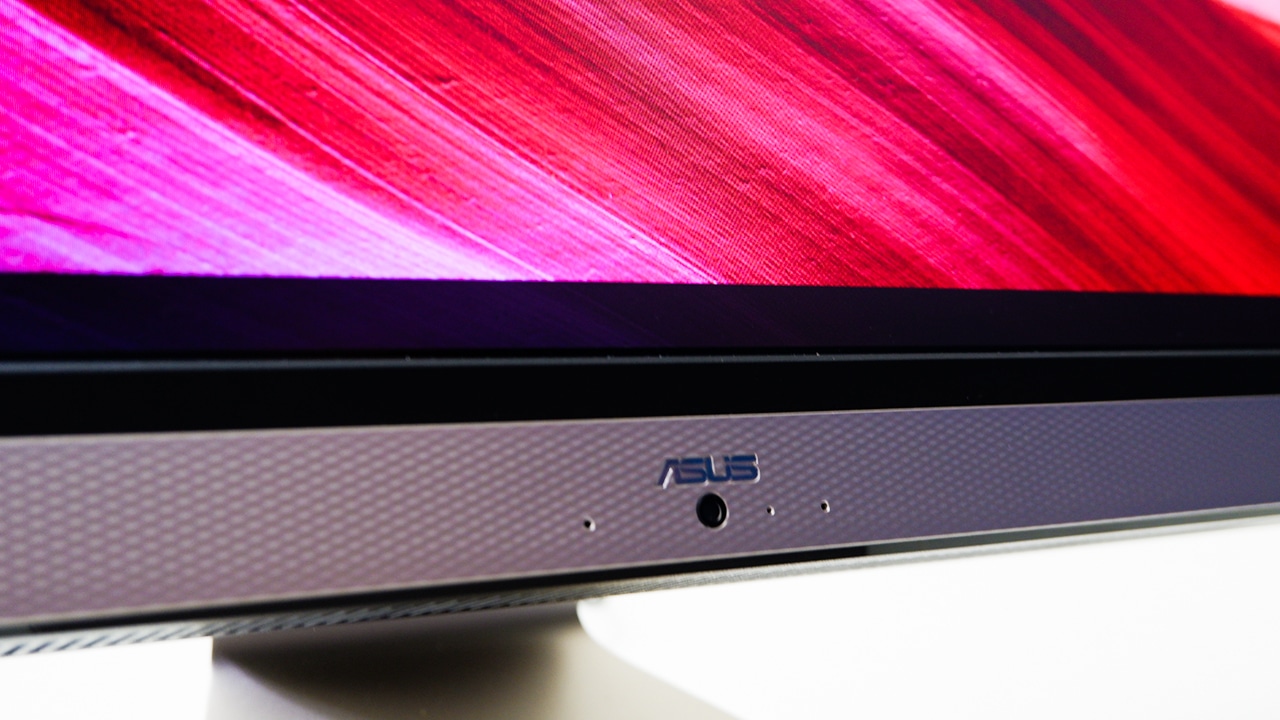 Even though you can tilt the unit by a few degrees to find your sweet spot, you sadly can’t adjust the height to remedy the poorly placed webcam.

What exactly can it run?

One look at the specifications sheet, and you can tell what this machine is meant for.

My review unit is equipped with an Intel Core i7-8550U, 8GB of memory, and an NVIDIA GeForce MX150 graphics chip. This setup means the Vivo AiO can handle light workloads such as Microsoft Office, Chrome, and Photoshop with ease, but anything visually heavy will make it struggle a bit. 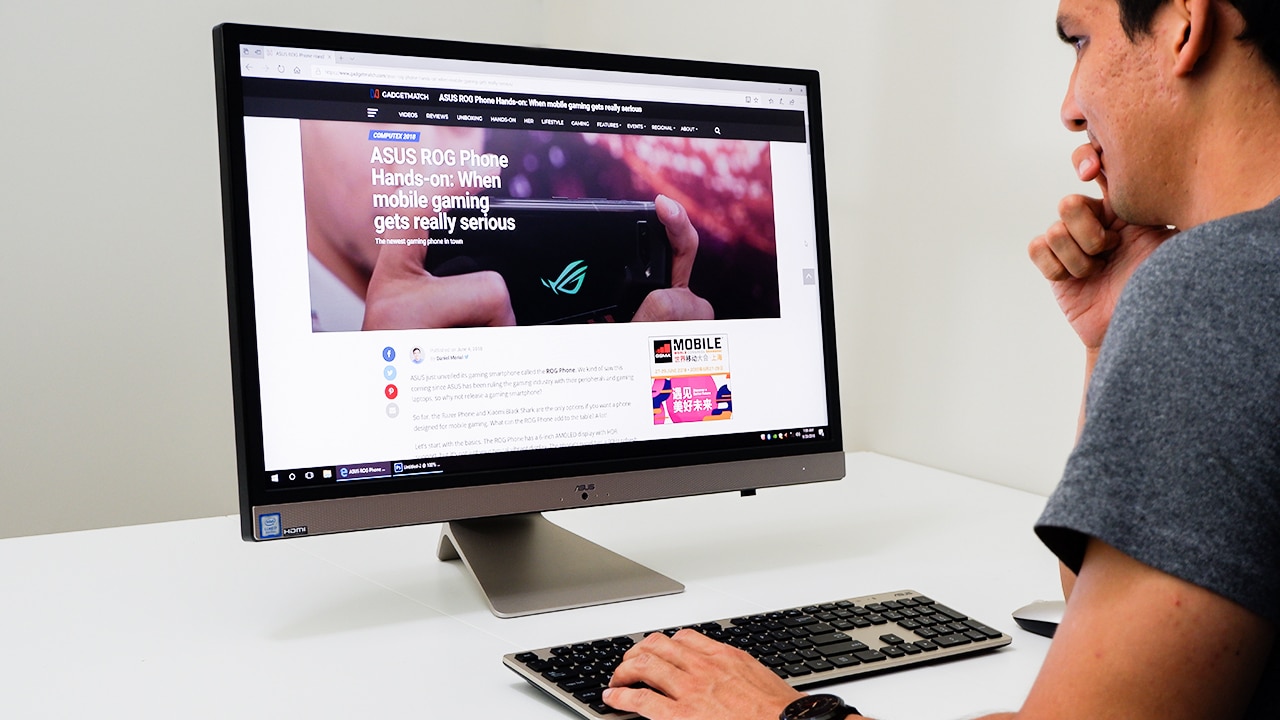 Like most AiO computers, upgrading components is a pain, so you’ll have to settle for whatever configuration you pay for from the start, so choose wisely.

During my time with this unit, I didn’t experience any lag while browsing websites, writing articles, and editing photos — all at the same time. That’s largely thanks to the quad-core Core i7 processor with Hyper-threading, giving you eight logical cores in total.

It’s only when I fired up a couple of graphically demanding games when the system couldn’t keep up. 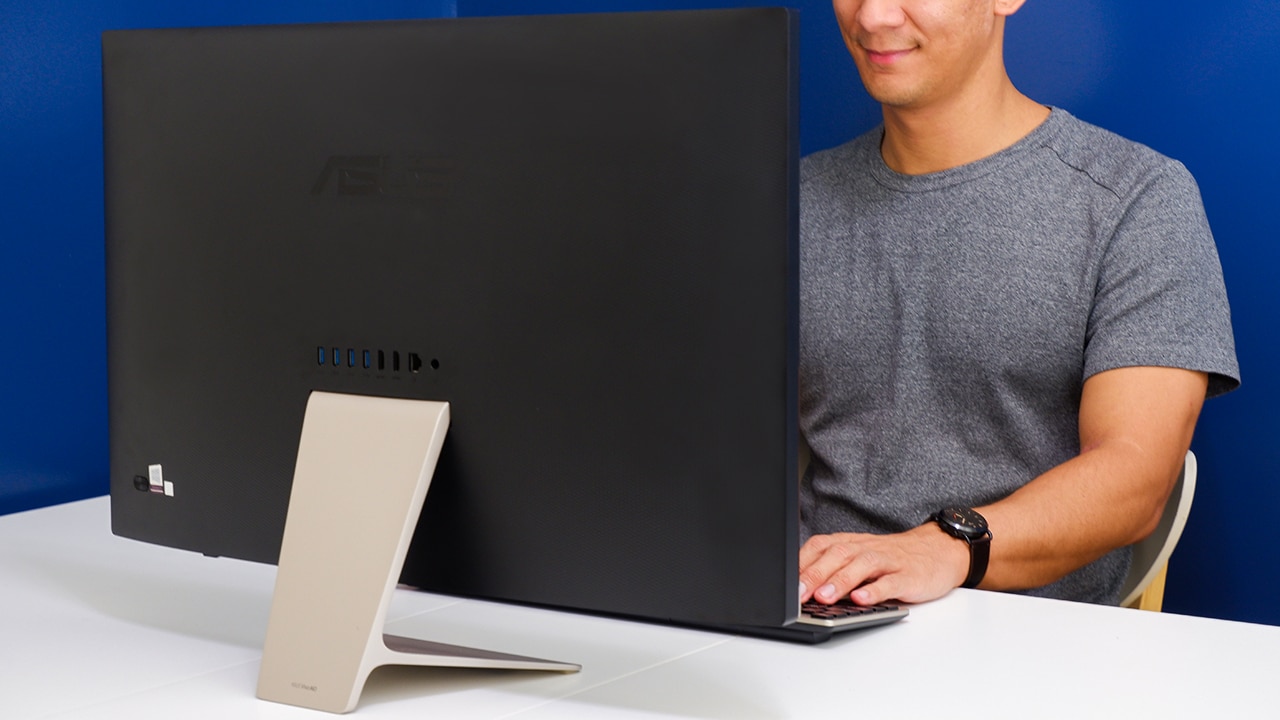 For kicks, I played some Final Fantasy XV on this thing. As expected, I was forced to endure the lowest graphics settings on 1080p. However, to my surprise, the game managed to run at a consistent 30 frames per second, which made it totally playable. Any title less power-hungry than Final Fantasy XV — such as Fortnite or PUBG — will definitely run more smoothly.

Video editing on Premiere Pro is enjoyable on the large monitor and its powerful stereo speakers, but don’t expect rendering to be seamless. Still, I highly recommend getting a configuration with both an SSD and HDD to speed up the processing and provide you with enough storage, respectively. My setup has a standard 128GB M.2 SSD and 1TB HDD.

All in with the all-in-one?

In a nutshell, this is pretty much the Windows equivalent of an iMac. And like an Apple product, the Vivo AiO simply works. There’s no cumbersome setup process or annoying cables and dongles to deal with; plug it in and you’re set.

Who is this for other than iMac users wanting to jump ship? I’d say Windows users who want more screen real estate than what a laptop offers, yet need to save as much desk space as possible. An AiO like this is by far easier to transfer from one point to another compared to a traditional desktop PC with its separate monitor and multitude of cables.

Of course, this costs more than a custom-built PC spec-for-spec. You may buy a Vivo AiO with a starting price of US$ 1,000, but you could assemble a more powerful rig for less.

It ultimately comes down to convenience versus power. Which one will it be for you this time? Take a long look at your work space and decide from there. 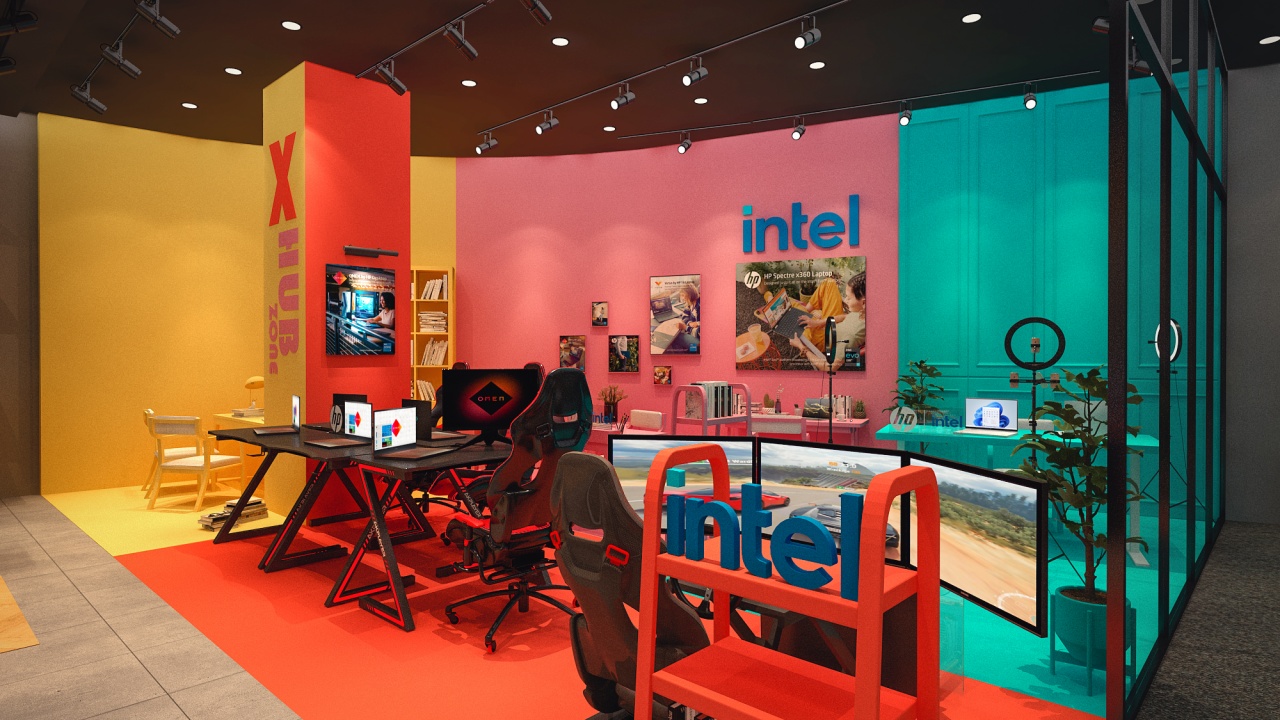 The X-Hub is a seamless online-to-offline (O2O) experiential retail experience for tech consumers.

The physical store in Malaysia is combined with an integrated O2O platform to create a seamless omnichannel commerce journey across six Southeast Asian countries.

The Experience Hub unifies the retail experience across the Southeast Asia region, connecting the Kuala Lumpur flagship store to 82 online stores spread across Malaysia, Indonesia, the Philippines, Singapore, with Thailand and Vietnam to follow in March 2022.

Online consumers may be able to personally interact with HP Live Advisors, a team of dedicated experts based on the X-Hub via real-time video calls and chat functions.

These will be made available in preferred local languages, while live streams on the latest HP products is also made possible via the HP Virtual Showroom.

This way, consumers will be able to continue shopping without having to be in Malaysia physically.

As for customers who want to visit the physical store in Malaysia, there are interactive ‘Test Drive’ stations to experience all of HP’s technology.

Visitors can also access personalization services such as custom engraving and printing, or connect to in-store or online HP Live Advisors for real-time inquiries.

The flagship store was created in partnership with Thunder Match Technology Sdn Bhd, Malaysia’s largest tech retailer. HP also partnered with Shopee and Lazada. Both of which support the online experience. 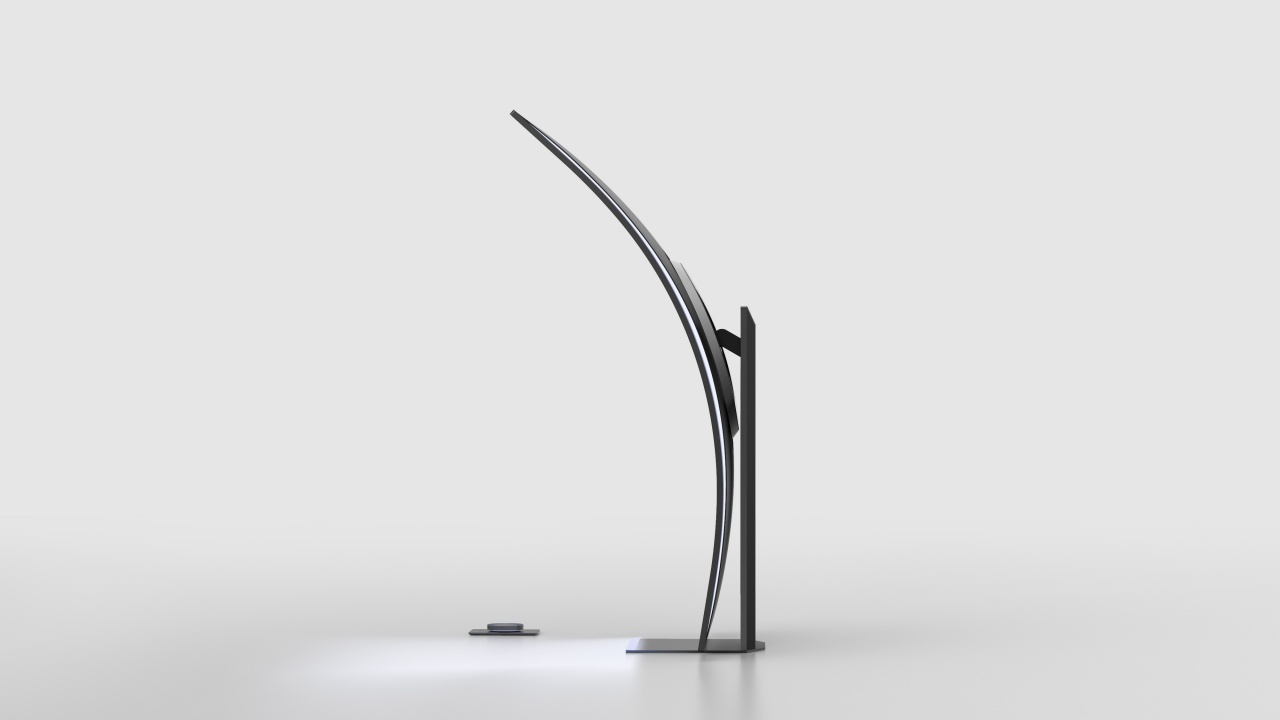 The Odyssey Ark is a next-generation flexible monitor. It’s made literally for anything from editing to gaming at home. The Ark is the new industry-leading gaming display with a curved 55-inch display and 16:9 aspect ratio. That’s huge.

It’s HAS or Height Adjustable Stand can pivot and tilt functionality. In addition to advanced ergonomic design, it offers every gamer optimal comfort. 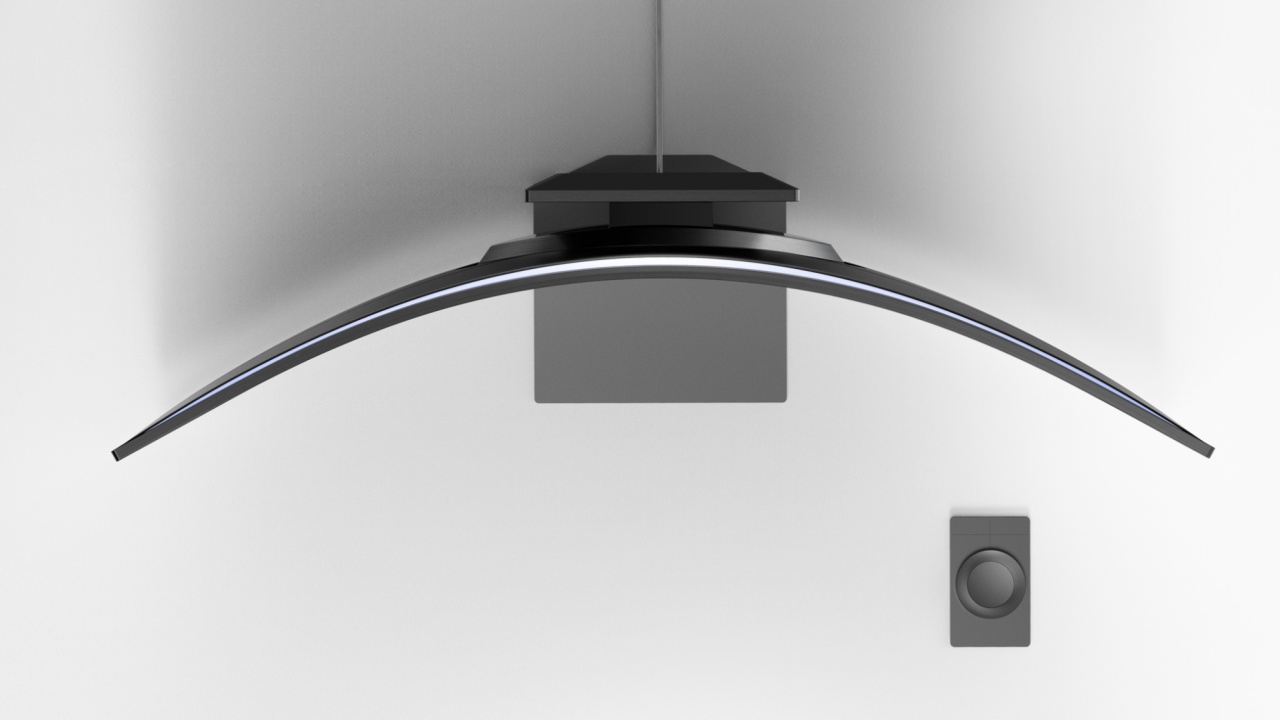 It can go into a new vertical cockpit-style rotating display that provides a new gaming experience and allows portrait or landscape orientation for multi-tasking and multi-window setup. Multiview options allow users to adjust Odyssey Ark exactly how they want it with a totally adaptable screen size to fit the game or the program without compromising its 4K display and bright, colorful images.

The monitor also features a wireless, dial controller to manage lighting and the interface.

Pricing has yet to be announced but Samsung hopes to bring it to market in the second half of 2022. 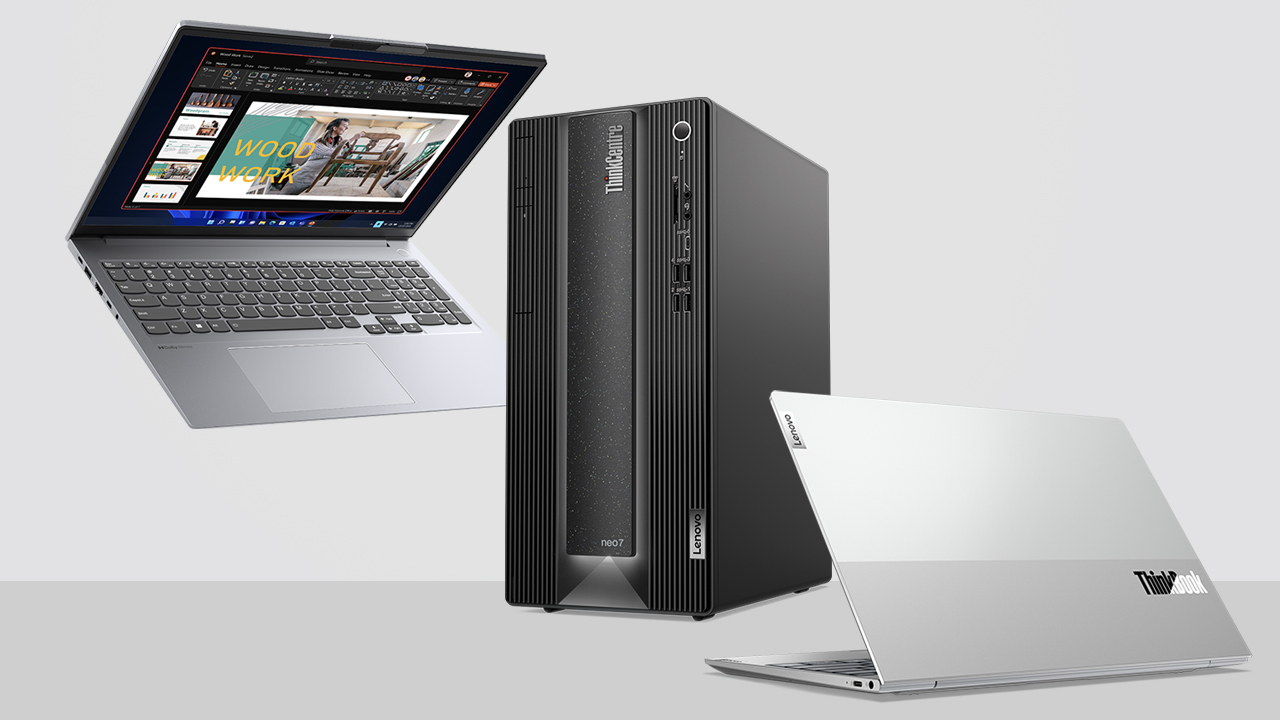 Hybrid work, work from home, and what have you. There are plenty of work setups now and Lenovo hopes to be in the forefront of everything as they launch plenty of ‘Think’ line of devices for small and medium businesses.

The ThinkCentre neo offers a stylish and minimalist design for a contemporary look with a new terrazzo color and material finish. A nice departure from the bland look of most SMB desktop PCs.

A tower model designed to meet the needs of high-performance content creators, developers and anyone who works with complex workloads. 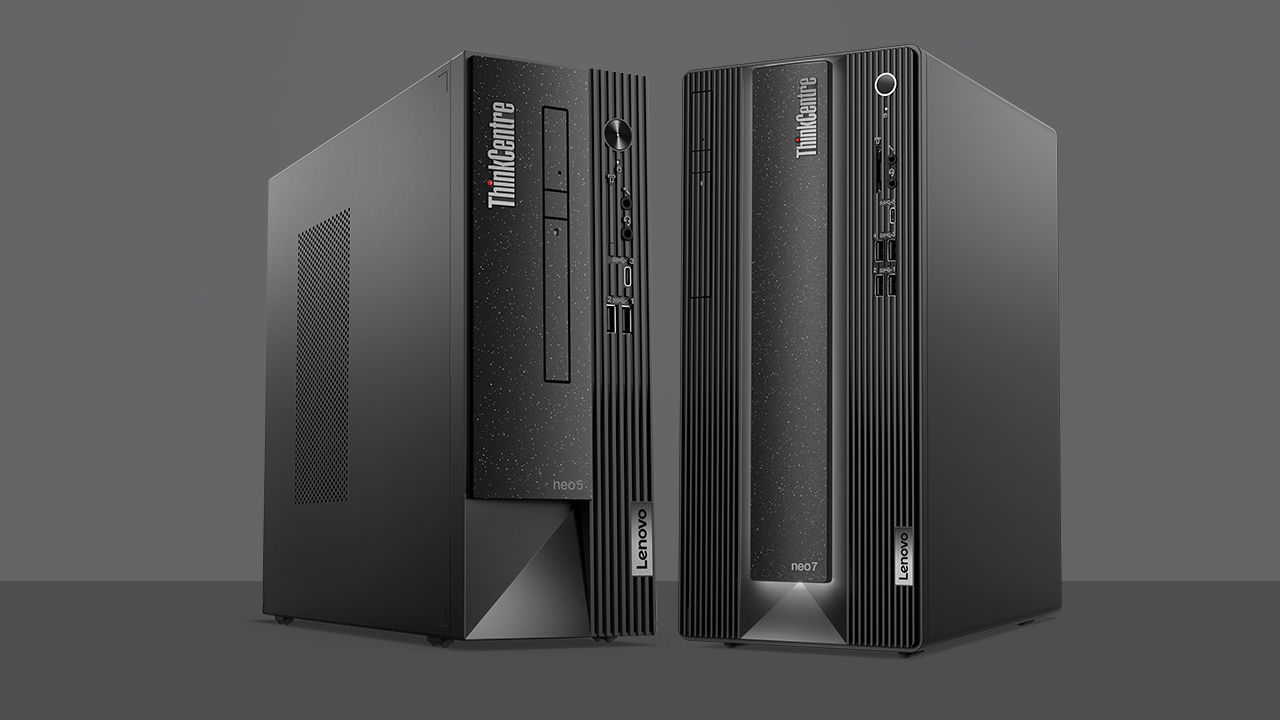 It features up to 128GB DDR5 memory, up to an NVIDIA GeForce RTXTM 3060 Ti GPU, giving it the benefit of the NVIDIA Studio platform, and 2TB HDD / 1TB SSD storage to perform multiple tasks without disruptions.

It has a Smart Cable which instantly connects two computing devices while simultaneously operating them within one screen. Using neo 70t’s Smart Storage feature, it is easy to automatically backup data securely and access it from multiple devices. 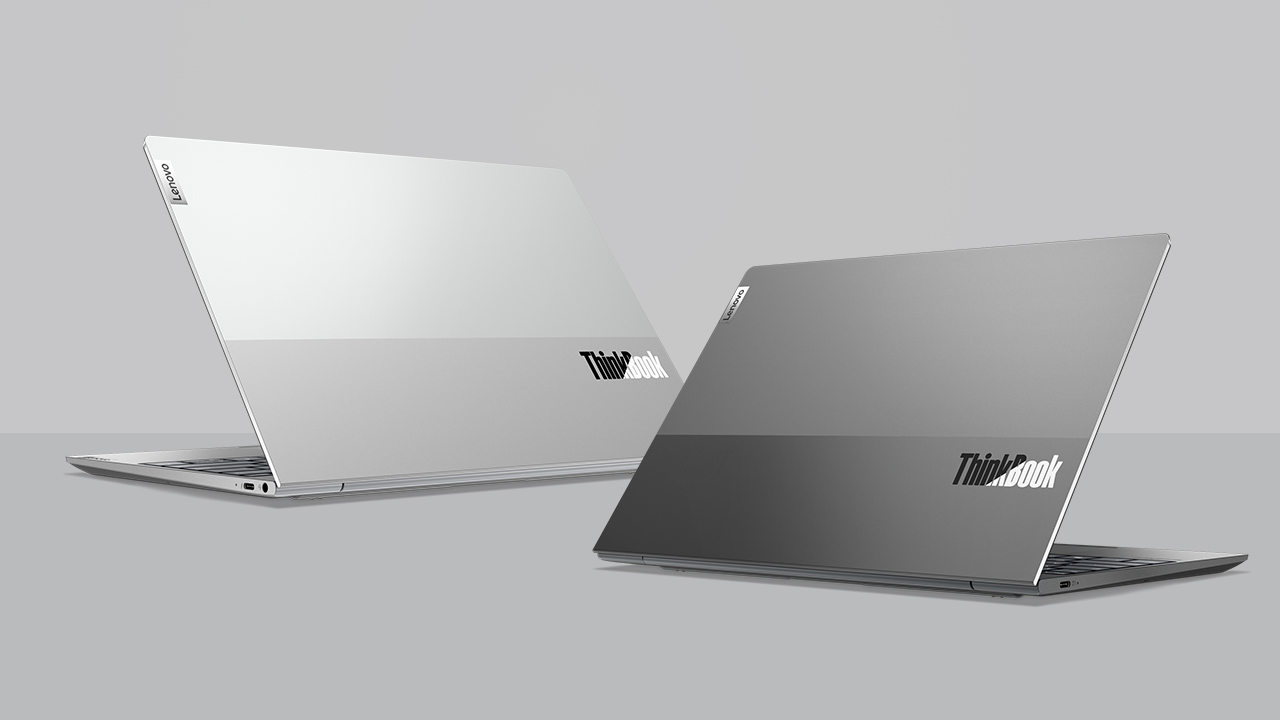 A large 56Whr battery and ambient light sensors to manage display power efficiency mean power anxiety is not on the agenda. A unique ThinkBook Wireless Multi-Device Charging Mat is optional and can deliver 65W wireless laptop charging via Power by Contact, and the integrated Qi charger can charge a compatible mobile device up to 10W.

It offers highly flexible configuration options, from mainstream productivity needs to high performance models. All have a slimmer design to previous generation and move to 16:10 aspect ratio with a larger display area.

A larger Touchpad with glass surface adds to the interactive experience and Dolby Atmos Speaker System delivers immersive audio for calls and entertainment. Optional sensor-based smart features are focused on security and collaboration. 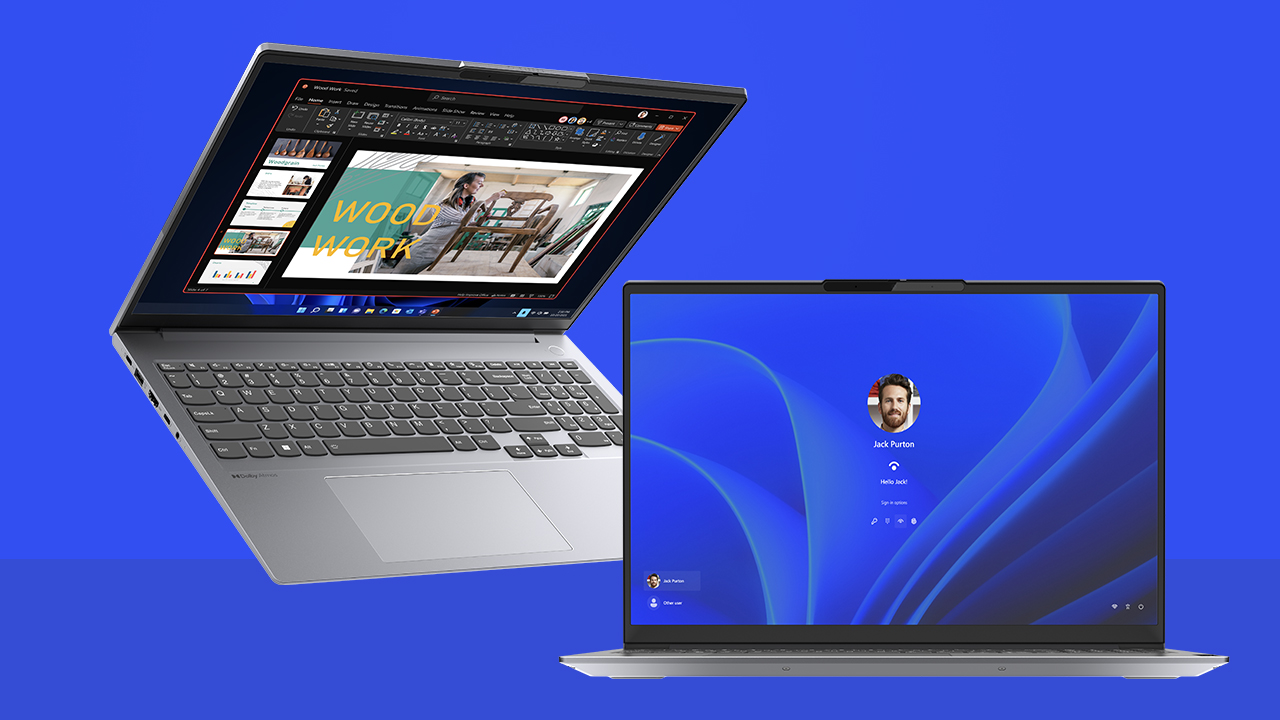 A sturdy and stylish bag with weather-resistant materials, a convenient padded and adjustable shoulder strap for extra comfort and includes zippered and hidden pockets to store valuables. As hybrid working takes hold, easy to use input devices have become a mainstay of many.

Companies can leverage the Lenovo Service so that they can rest assured that their employees’ hardware, accessories, and software were installed correctly, properly configured, tuned and tested, improving productivity and the employee experience.

Easy Install Services will be available to customers via their preferred purchase method, i.e., directly from Lenovo and Lenovo’s Partners.