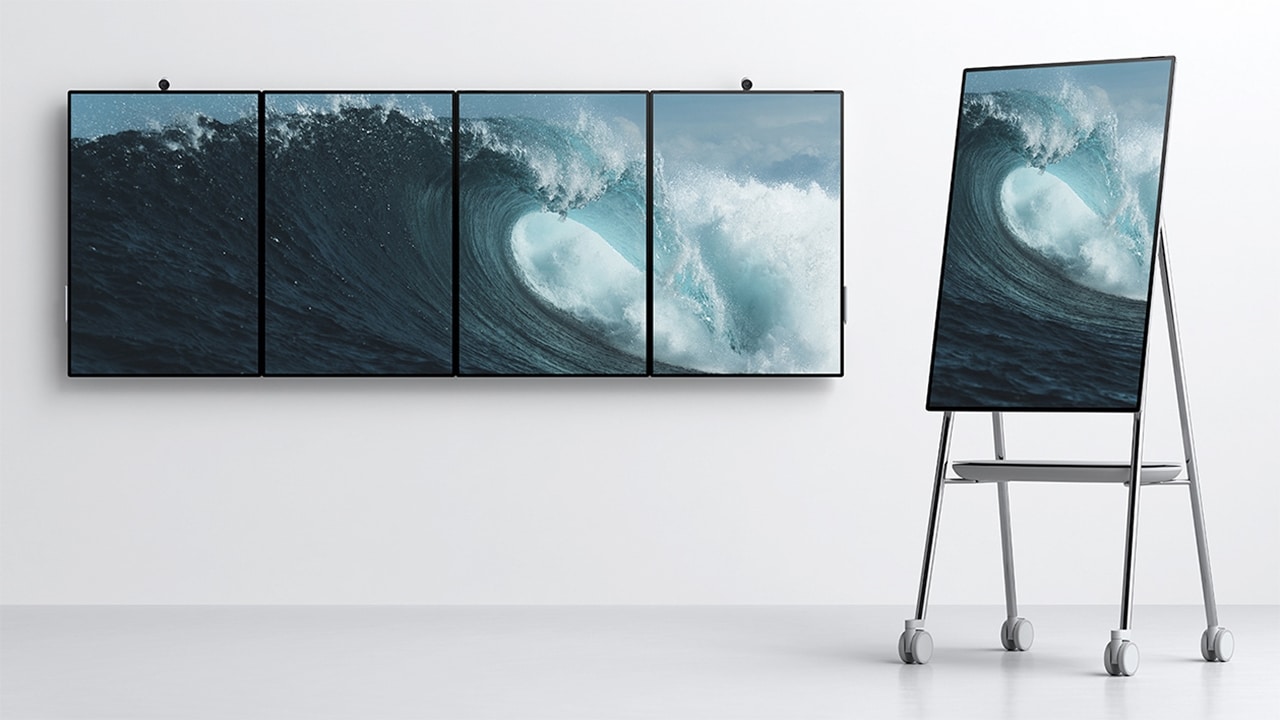 Are you familiar with the Microsoft Surface Hub? Well, we can’t blame if you’re not because that huge piece of touchscreen computer didn’t make its way to homes, but rather to offices. Unlike other Surface products, the Surface Hub was meant for workplace collaboration to practically replace the good old whiteboard.

Despite being a crazy expensive digital whiteboard, here we are now with its second version. The Microsoft Surface Hub 2 is a much improved gigantic touchscreen designed to be placed on a wall or on wheels.

Compared to the first version, the Surface Hub 2 has drastically reduced bezels. It basically looks like a 50.5-inch 4K+ modern TV in 3:2 aspect ratio that can be rotated with a slight push. Surprisingly, the video camera is now gone from the main device and you’ll need to plug a webcam above or beside (depending on the orientation) the display for video conferences. As for the stylus, it magnetically attaches to the sides of the panel.

It’s quite hard to put our awe into words, so we’ll show you the concept video of what you can do with the new Surface Hub 2:

You can see that the device is so fluid in the office. You can hook it up to a wall, put it on a rolling case, or create a wall of Surface Hubs and transform it into an art piece when not in use.

Since the device is designed to be used by multiple people, users can easily log in using the side fingerprint reader and pull up their account. They’ll be able to find all their documents, data, and accept calls through the Surface Hub 2. 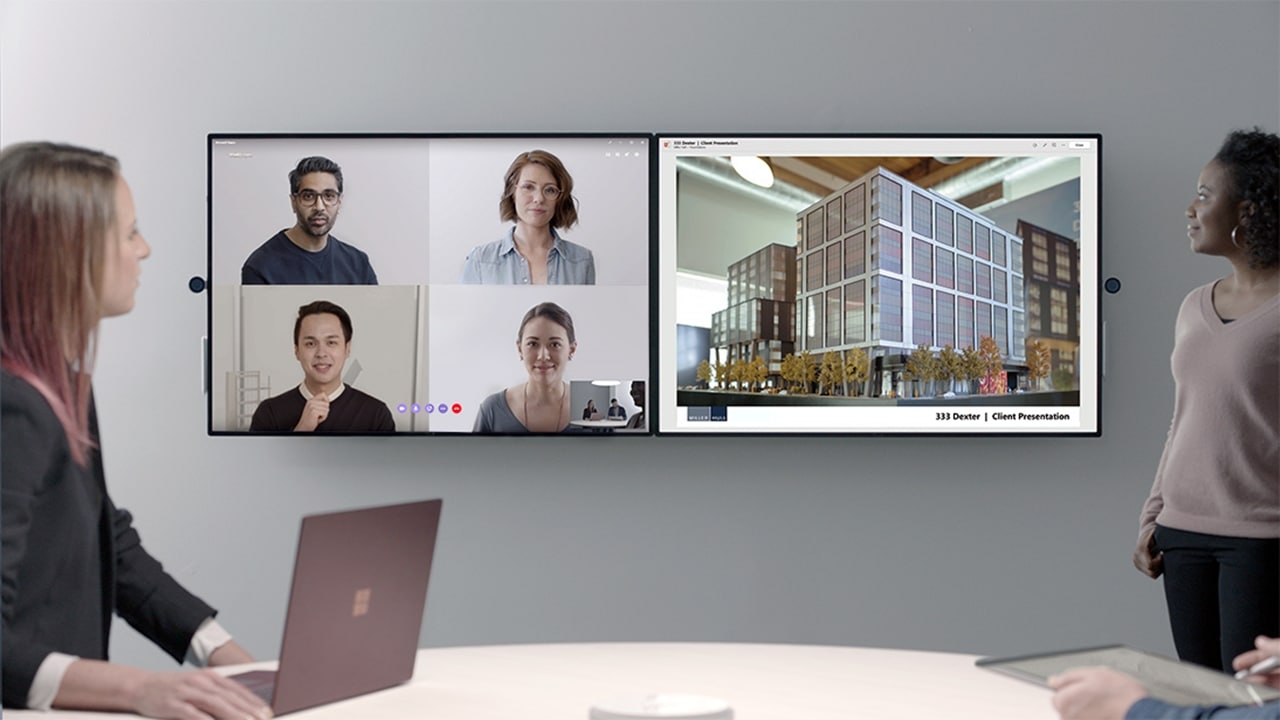 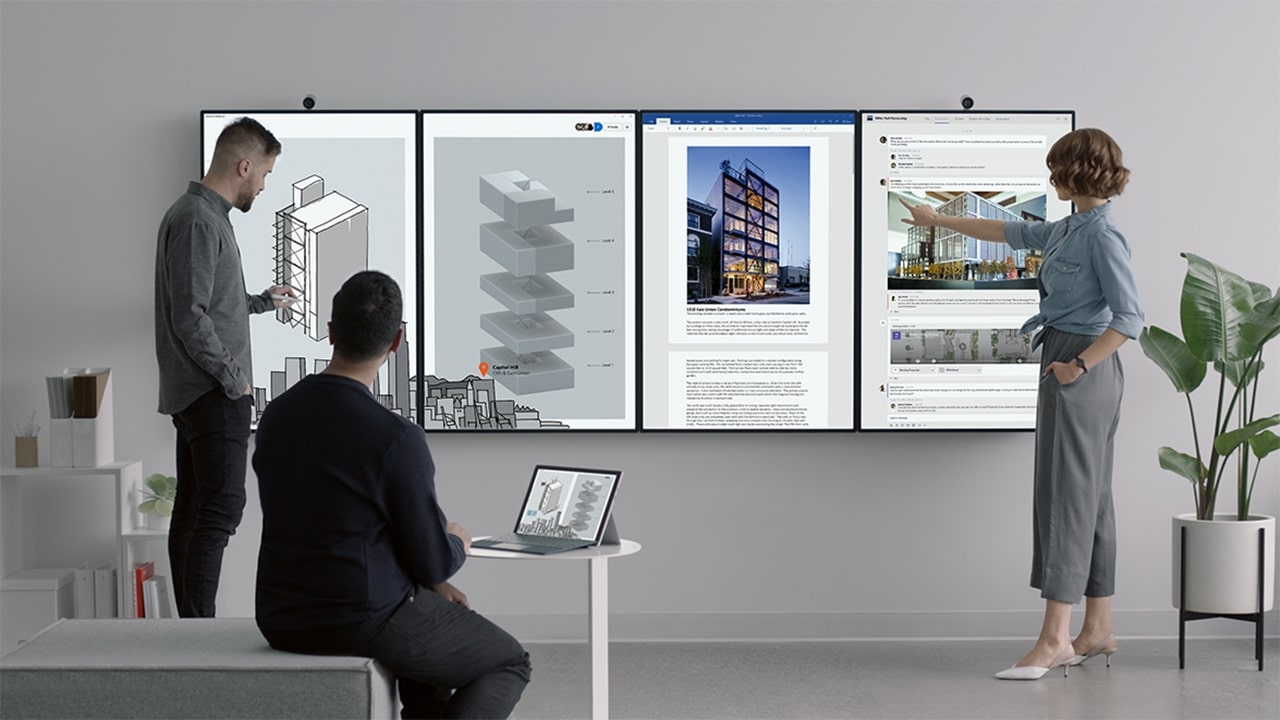 Microsoft will start testing the Surface Hub 2 with partners later this year. You can expect to see these in corporate offices and maybe commercial spaces in 2019. Pricing details were not announced, but it’ll not come cheap just like its predecessor which goes for US$ 9,000. 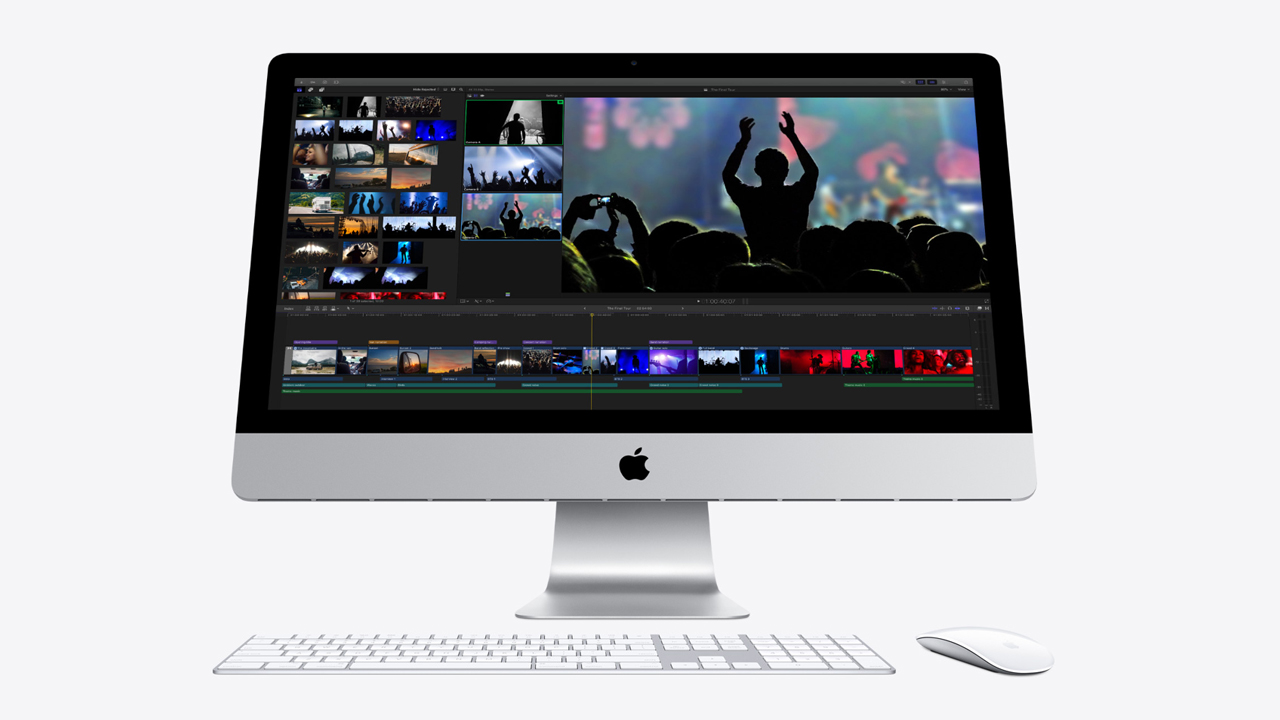 Earlier this year, Apple announced a monumental shift towards ARM-based Macs, leaving their traditional Intel-based lineup. The announcement mounts a lot of anticipation for a new generation of desktops and notebooks. However, before that happens, the company is concluding its run of Intel-based devices. Today, Apple launches an all-new 27-inch iMac, powered by — you guessed it — Intel.

Of course, Intel versus ARM isn’t the debate here. The new desktop is still vehemently powerful, brandishing up to a 10th-generation Intel Core i9 10-core processor which can reach up to 5.0GHz. For memory, the 27-inch iMac can have up to 128GB of RAM. It can also have up to a whopping 8TB SSD of internal storage. Rounding out this powerhouse of a device, the desktop brings the AMD Radeon Pro 5000 series with up to 16GB of GDDR6 memory.

As before, the iMac’s screen absolutely delivers with a 5K Retina Display with True Tone technology and 500 nits of brightness. However, this time, the desktop is offering a new nano-texture glass option, drastically reducing glare more than average matte finishes. In the same vein, the FaceTime camera can now display images at 1080p resolution with built-in tone mapping, exposure control, and face detection.

In addition to the 27-inch iMac, Apple is also updating the 21.5-inch iMac and the iMac Pro. The 21.5-inch iMac will now come with SSD storage by default and an optional Fusion Drive. Meanwhile, the iMac Pro now starts at a 10-core Intel Xeon processor, going up to the 18-core variant.

SEE ALSO: This is how Apple envisions the next iMac

According to macOS source code 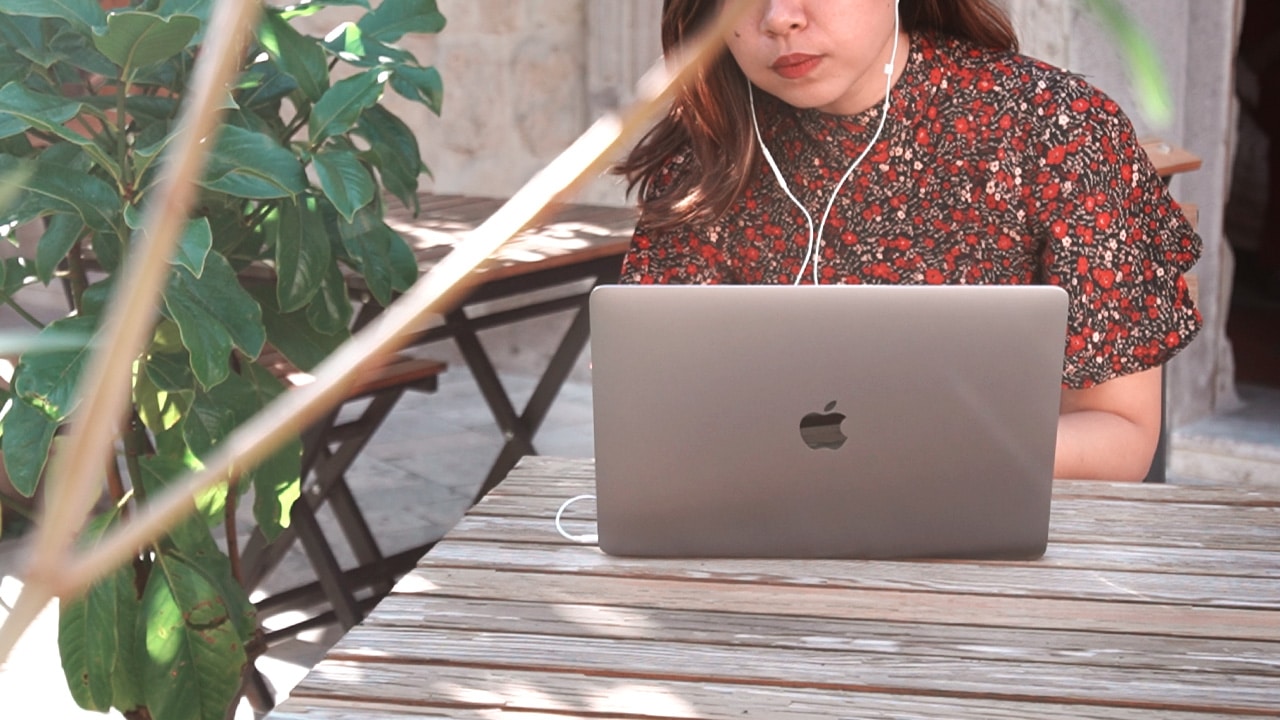 Because the technology is already ubiquitous today, you might not remember the big facial recognition battle from a few years ago. Back then, tech companies came up with their own variations of facial recognition, including 3D mapping and iris scanning. However, despite their ubiquity today, facial recognition has suddenly stopped at the smartphone level, leaving other devices without the technology. Well, that will soon change. According to official source codes, Apple will finally introduce Face ID for MacBooks.

Spotted by 9to5Mac, the latest macOS Big Sur contains code which references a “PearlCamera.” The strange codename first debuted in 2017 for the iPhone X. It’s an internal codename specifically pertaining to the True Depth and Face ID camera technologies. This was back when the features were still brand new. The codename’s inclusion in the new code means support for the technology going forward.

However, the report believes that the development is still in its early stages. A Face ID-compatible device, Mac or MacBook, might not come in the near future yet. Still, it’s a welcome addition to the notebook and desktop segment. Finally, Apple will introduce its Face ID technology for MacBooks.

Apple, AMD, and Qualcomm have a significant lead 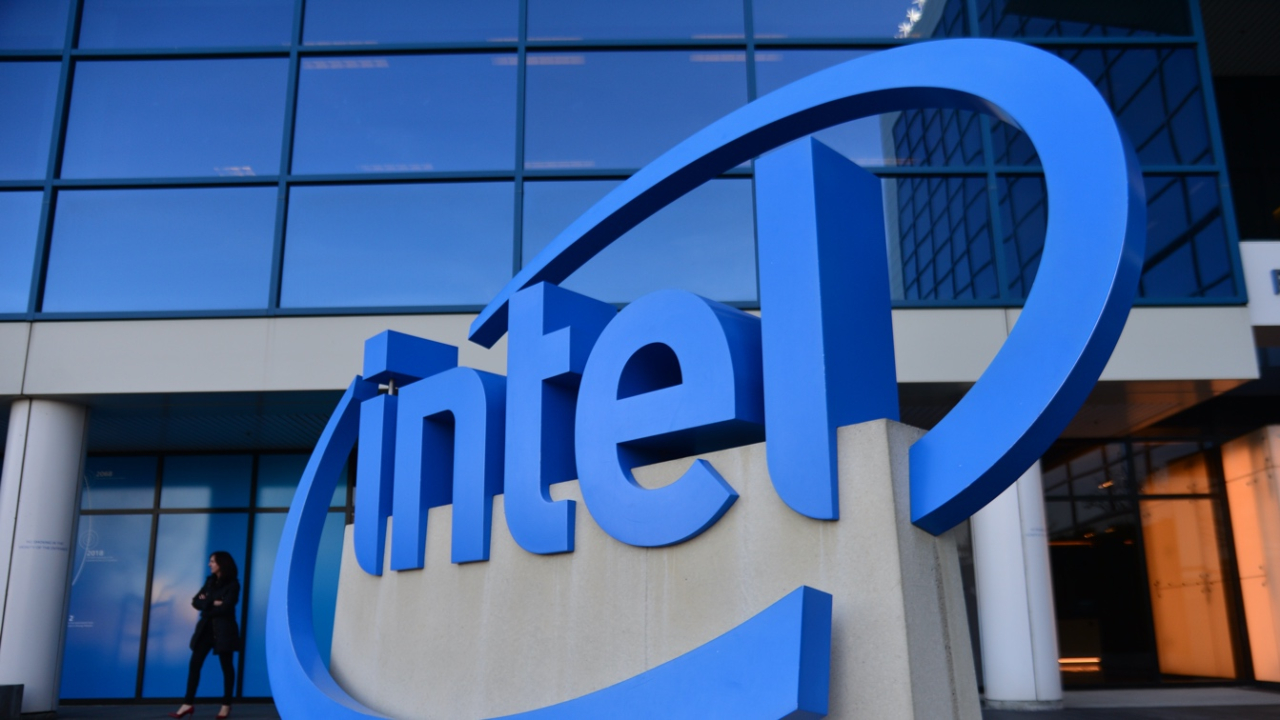 In its quarterly earnings call, Intel revealed that it’ll have to adjust its future product lineup. The company further said its 7nm (nanometers) processors will be six months behind schedule. This means they won’t be ready until the end of 2022 or even the first half of 2023.

The yield of its 7nm process is now 12 months behind schedule. In turn, Intel said it’s “accelerating its transition to 10nm products” in 2020, due to an increase in demand.

What’s even more surprising is, Intel is considering contingencies that could see its chips fabricated by third parties if it can’t get its own foundries. Rival AMD is already making 7nm chips and this is exerting further pressure on Intel to progress. Apple and Qualcomm are leveraging 7nm technology for a couple of years now.

7nm chips are more efficient and best suitable for portable gadgets like laptops and smartphones. The delay could put Intel in serious danger because Arm has managed to attract Apple as well. The giant shall be shifting its Mac lineup to an Arm-based architecture within two years, ditching Intel’s decades of partnership.

Intel is a very experienced player and designs as well as produces its own chipsets. On the other hand, companies like TSMC have mastered the production and make chips for other companies under a contract.

Intel’s current best offering, popularly called 10nm in the industry, was ideally scheduled to appear in 2017. But it’s making high-volume sales now. Thankfully not everything is going south for the chipmaker and its Tiger Lake CPUs are still on track for launch later this year. Its first 10nm Alder Lake-based desktop and server CPUs will be ready by the second half of 2021.