Two months of collective restraint from the world’s most powerful smartphone companies have led up to this day in Barcelona. If this were Hollywood, today would be the Oscars, maybe even more exciting. Today, tightly guarded secrets finally see the light of day, leaks that couldn’t wait to be revealed are confirmed, and expectations that have kept the tech industry at a standstill are either quenched or met with utter disappointment.

In a span of just two years, Korean smartphone giant Samsung has been on the receiving end of both criticism and praise. Its 2014 smartphone the Galaxy S5, with its plasticky build and faux leather stylings was a big miss while its 2015 attempt the glass and metal Galaxy S6 was for the most part, everything its demanding user base clamoured for.

Today as they unveil their latest Pièce De Résistance or as the Spanish say the Plato Fuerte, Samsung hopes for a repeat of last year’s performance.

I’ve seen and held the new Galaxy S7 and its curvier big brother the Galaxy S7 Edge – both are great phones, not blow your mind phones, but phones that deliver a certain level of contentment and satisfaction.

Call it managing expectations. For sure, a smartphone on the bleeding edge is what we tech journalists seek out. But at its core, if you strip away the pomp and hyperbole of a smartphone launch, see beyond the marketing speak, and allow enough time for the hype to die down, you’ll find that what everybody really wants is a smartphone they can be content with.

The Samsung Galaxy S7 is one of those phones.

Two key themes mark the design of the Galaxy S7 and S7 Edge (from hereon out collectively referred to as the S7 unless otherwise stated) – giving back what was surreptitiously taken away, and improving on what has already been done right.

Like the S5 of two years past, the S7 has an IP68 rating that guarantees survival under fresh or pool water up to depths of 1.5 meters for 30 minutes. The only orifices on the phone are a micro USB charging port and headphone jack, both remain exposed but protected thanks to a new cap-less design. 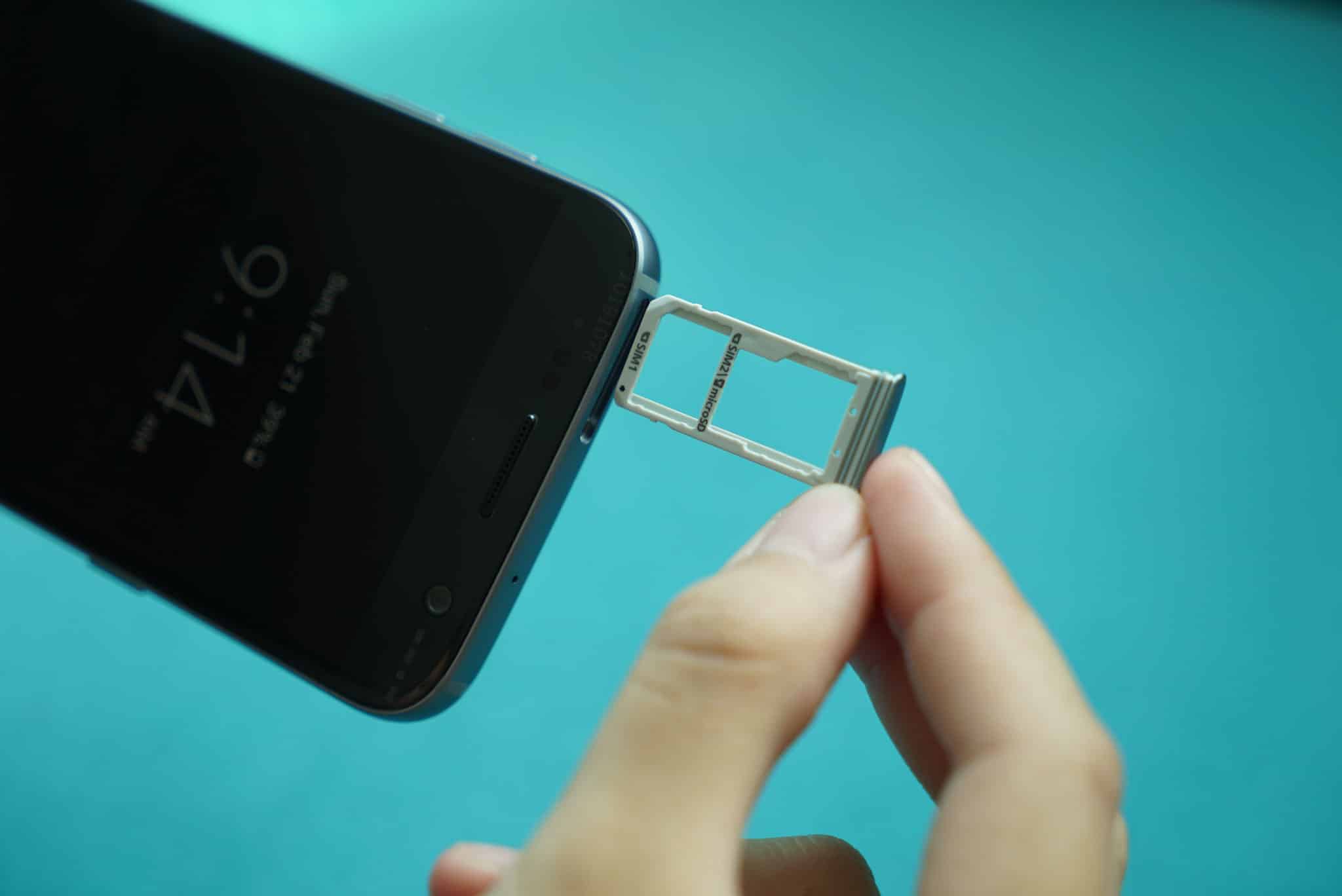 The hybrid SIM tray on the S7 and S7 Edge takes two nano SIM cards or one SIM and on microSD card.

The only removable part is its SIM card tray, lined with rubber stoppers to keep water out. The hybrid tray has two slots, one for a nano SIM, and the other for a micro SD (or a second nano SIM) card of up to 200GB in case the phone’s internal storage is not enough (32GB or 64GB depending on your region). The latter should appease critics who decried the absence of the expandable memory on the S6, and gives Samsung a leg up on Apple whose never made external cards an option on the iPhone.

One feature not making a comeback is user replaceable batteries. Instead Samsung is giving the S7 and S7 Edge batteries with larger capacities. Up to 3000 mAh on the S7 and 3600 mAh on the S7 Edge. Both phones also support fast wired and wireless charging and take 95 minutes and 115 minutes (wired) and 130 and 150 minutes (wireless) respectively to charge from 0 to 100%.

If you’ve seen the S6 then the S7 won’t look dramatically different. The S7 is still mostly made up of glass and metal but now has slightly more rounded corners, a slightly more squarish home button, and a display that’s even more flushed against its sides. 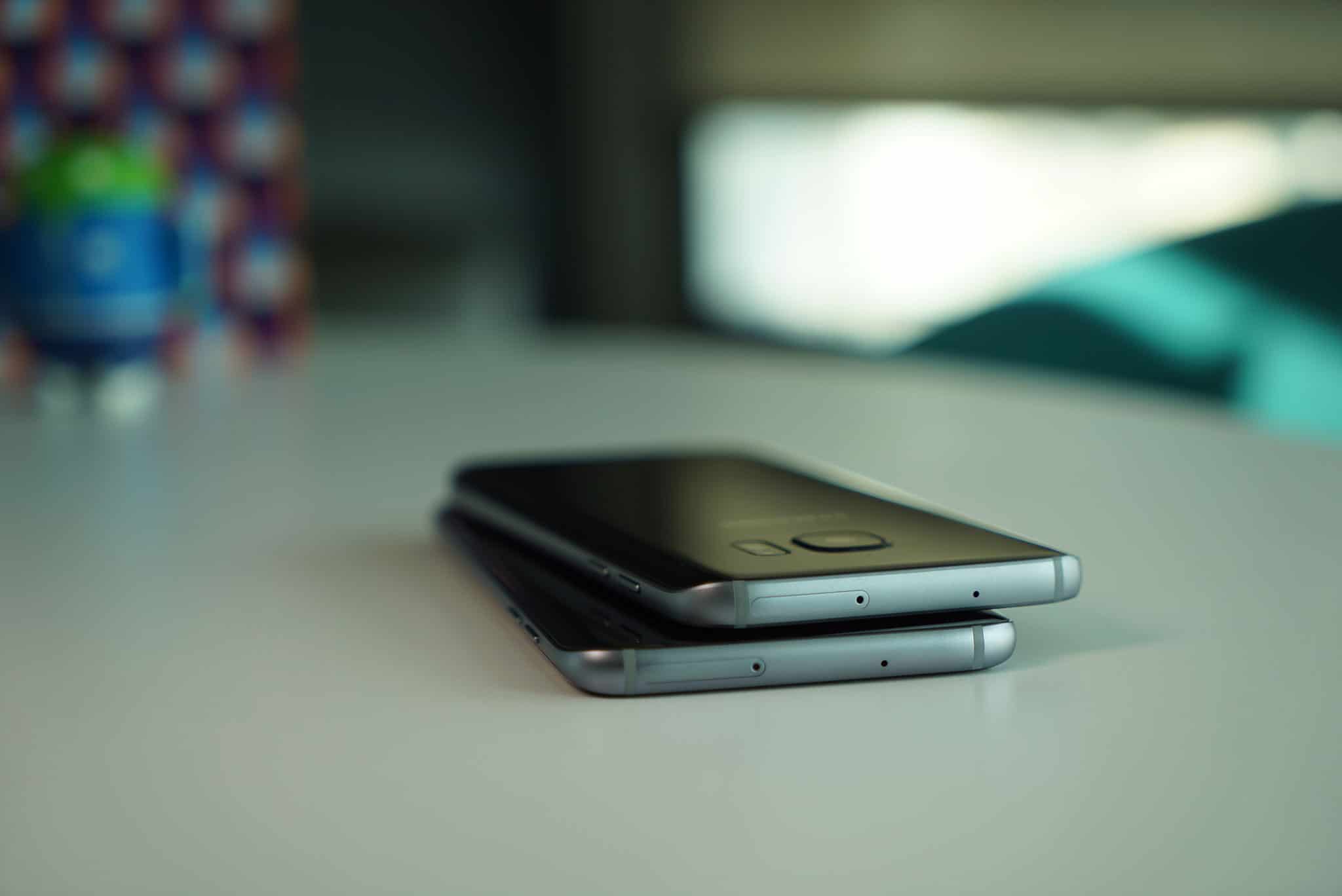 Both the S7 and S7 Edge are curvier than last years models thanks to new 3D glass.

The biggest design change can be seen and felt once you turn the phone around. The back of the of S7 now curves outward on both ends made from what Samsung calls 3D glass. It’s a simple but practical design change that’s made the phone less boxy, more ergonomic, and one that feels thinner than it actually is.

Samsung also improved the highly regarded camera of the S6.

While its shaved down the unsightly camera bump, everything else is bigger and better, including a faster f/1.7 lens and larger 1.4um pixel size. 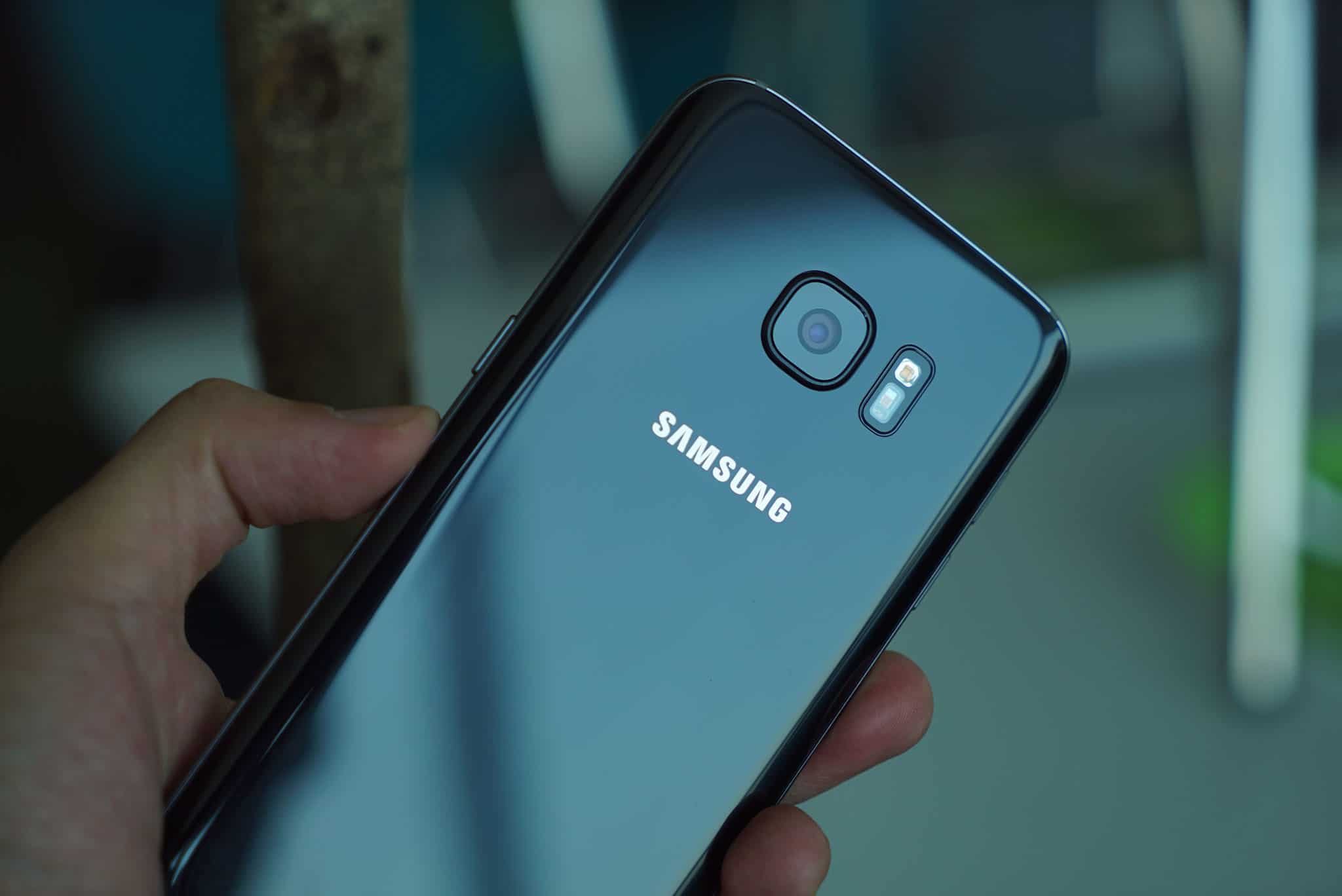 On paper the Galaxy S7 and S7 Edge have one of the best cameras seen on a smartphone ever.

The company is touting a new feature called dual pixel technology, something seen on high end professional cameras from Canon but never on a smartphone. The promise is even better low light performance and even faster focus speeds, up to 4x faster than its predecessor in low light.

Samsung is also making a bold move this year, cutting down on megapixels from 16 on the S6 to only 12 on the S7. In lieu of more megapixels you get larger pixels, a tradeoff that theoretically should deliver better looking photos across lighting conditions.

Double pressing on the home button still launches the camera app, and launch time is as fast as ever. From within the camera app Samsung has added a new Motion Panorama mode and made improvements to its Hyperlapse feature bringing down file sizes significantly so that it can be shared easily on the web.

Similar to what Apple did with the iPhone 6S, the S7’s selfie camera gets fill flash, not an actual front facing flash, but a sudden burst of light from your smartphone display.

Memory-wise, 4GB of RAM is standard across the board.

Gamers will enjoy a new feature called Game Tools that allow you to take screenshots, record game play, turn off notifications while in game, and the ability switch to a power saving mode that reduces performance but saves on battery life. The phone also supports Vulcan API so game developers can tap into even more power saving and performance driving features in tandem with the phone.

Last year Samsung introduced two innovative new smartphones with curved screens, the 5.1-inch S6 Edge and 5.7 inch S7 Edge Plus. Both models have been consolidated into one product this year the 5.5-inch Galaxy S7 Edge. The change might sound confusing at first but it is a smart move that clearly defines Samsung’s top-of-the-line smartphone offerings which in 2016 are the Galaxy S7 (5.1 inches) Galaxy S7 Edge (5.5 inches) and Galaxy Note 5 (5.7 inches with a bundled stylus), none of which compete with each other in both feature set and screen size. 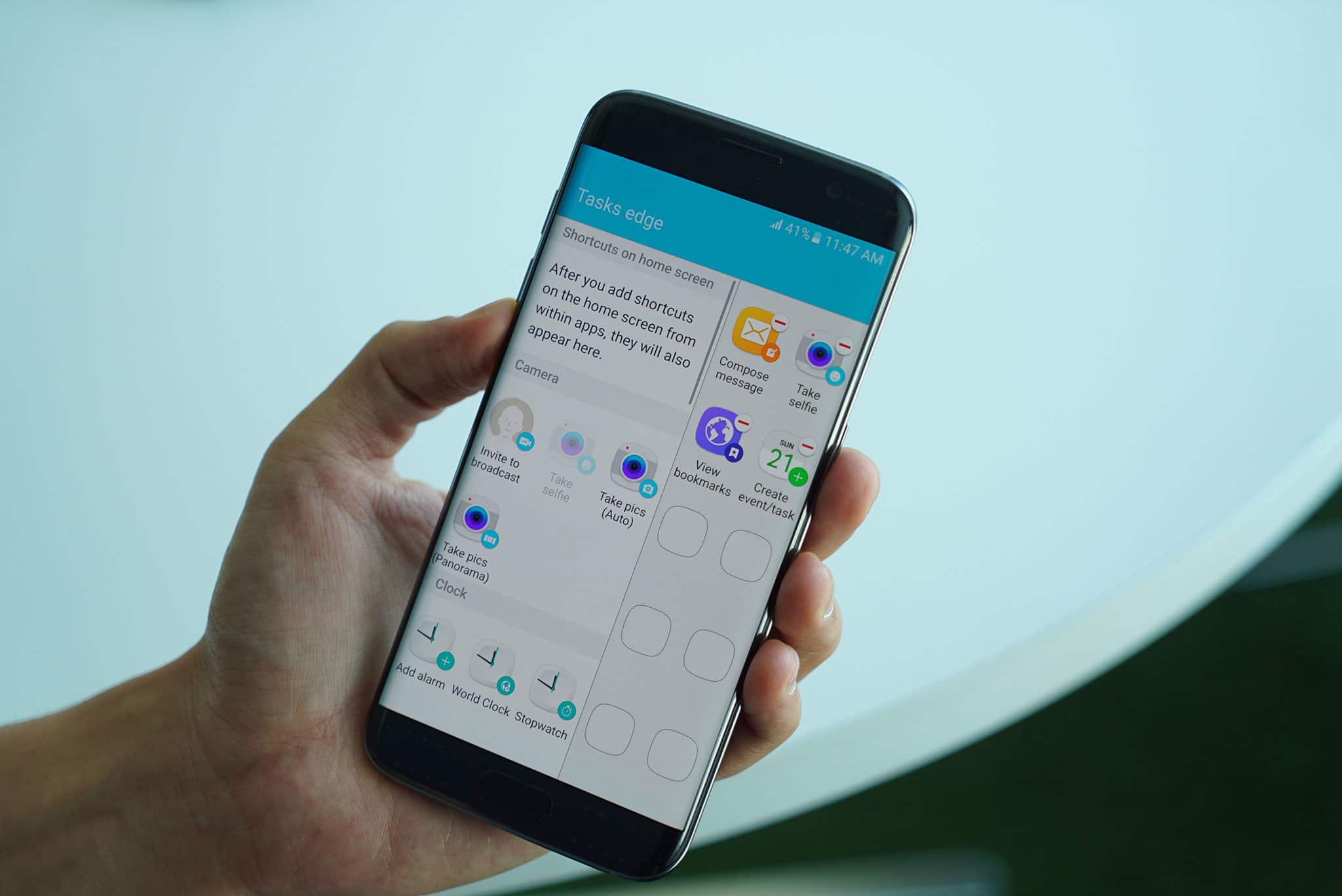 Tasks Edge on the Galaxy S7 Edge allows users to set shortcuts to tasks within certain asks, soon even 3rd party ones

Edge functionality on the S7 Edge has been expanded – the edge display is now two columns wide. The extra screen real estate means more space for 3rd party widgets. On top of “People Edge” (contact shortcuts) and “Apps Edge” (app shortcuts) Samsung is adding a third edge screen called “Task Edge” which allows you to create shortcuts to specific tasks within apps. For example you create a shortcut to launch the selfie camera, or compose a new SMS message. For now its Samsung apps only but the company is opening up Task Edge to third party developers so soon you should also be able to also create shortcuts for posting photos to Instagram and composing Tweets.

It’s only been a few hours since the launch of the S7, not enough time to crown it the next best thing. In a week or so after this hype has died down, I should be able to assess how I truly feel about the device and determine whether or not it is a phone that delivers contentment. But by then the phone could already be in your hands.

In an effort to be the first flagship smartphone in stores this 2016, Samsung is pushing for an aggressive worldwide release. Both phones will be available in the United States on March 11th. The Philippine release is scheduled for March 19th, with gold and black 32GB variants of the S7 and S7 Edge retailing for Php 34990 and Php 39990 respectively.