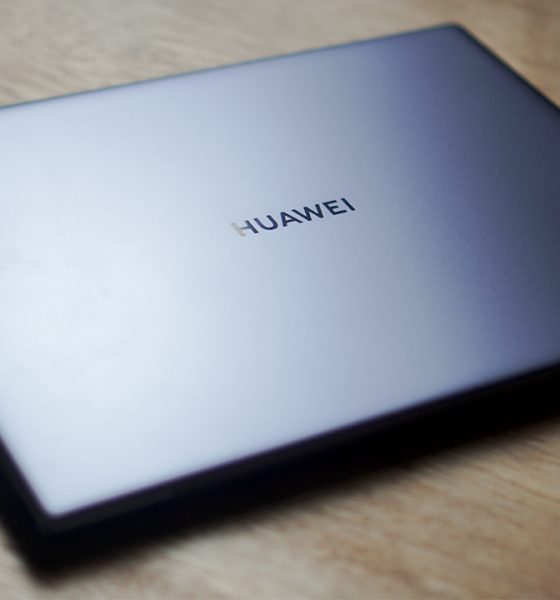 “If it ain’t broke, don’t fix it” said Huawei, probably

Huawei is continuously stretching itself across multiple devices these days. While the company is known mostly for their smartphones and, recently privacy issues, their attempts on creating laptops has also been a success. They manage to consistently cram in a ton of nifty features over the years, that they simply don’t change it every new year.

That rings especially true for the Huawei Matebook X Pro 2020 — same device, with the only difference being the hardware. On the surface, it maintains a lot of the core features last year’s model had. The question is whether or not it’s performance across the board remains consistent with the 2019 model.

It has a 13.9-inch FHD IPS touchscreen display 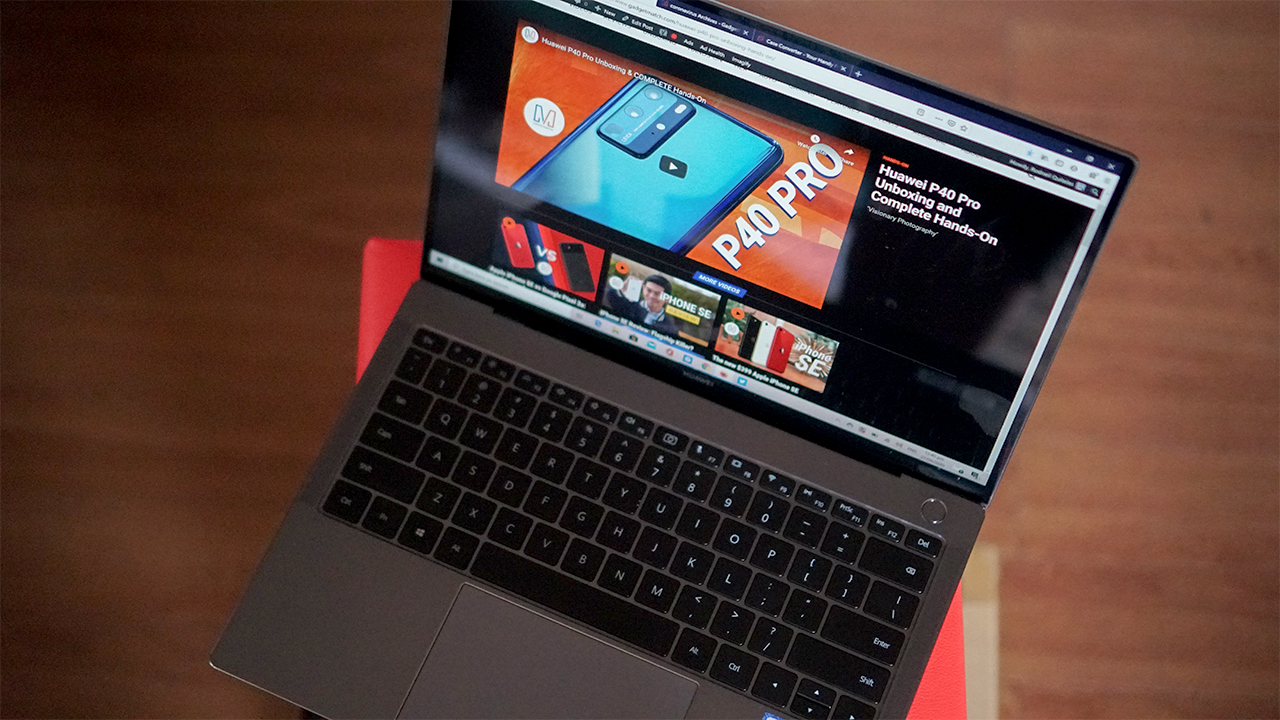 It comes with the 10th generation Intel processor inside 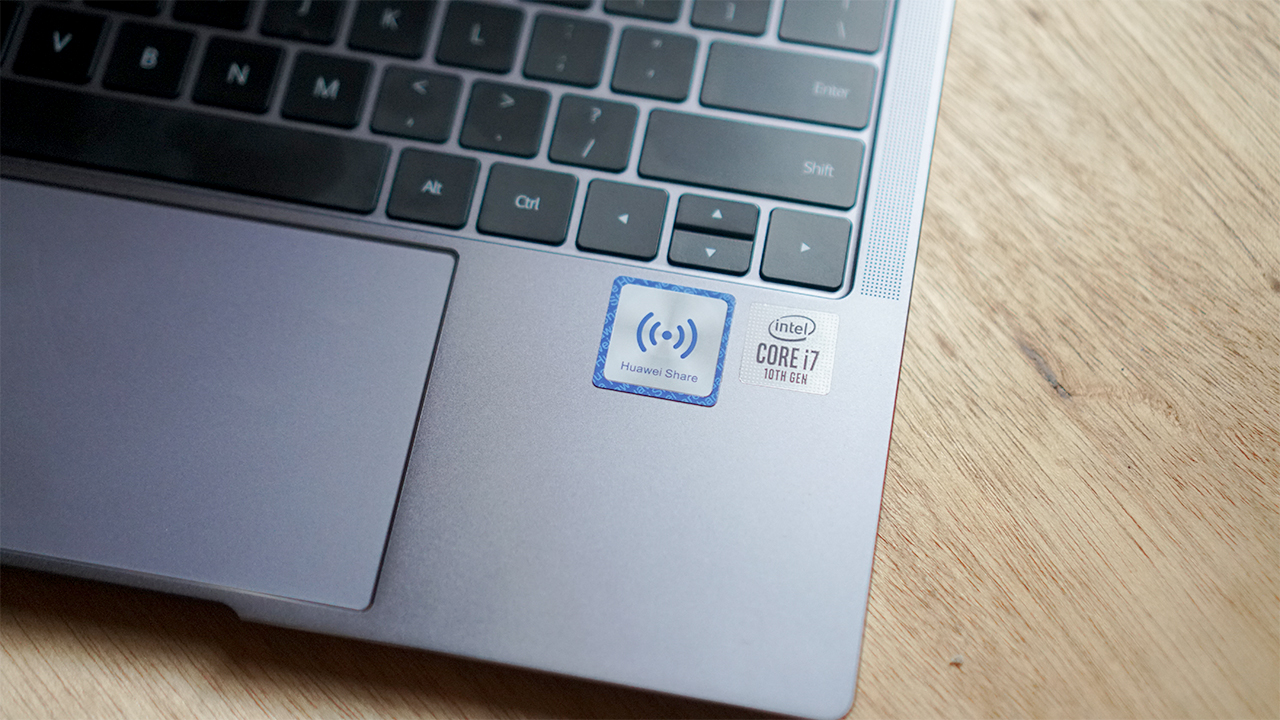 It has two USB Type-C ports with Thunderbolt 3 support 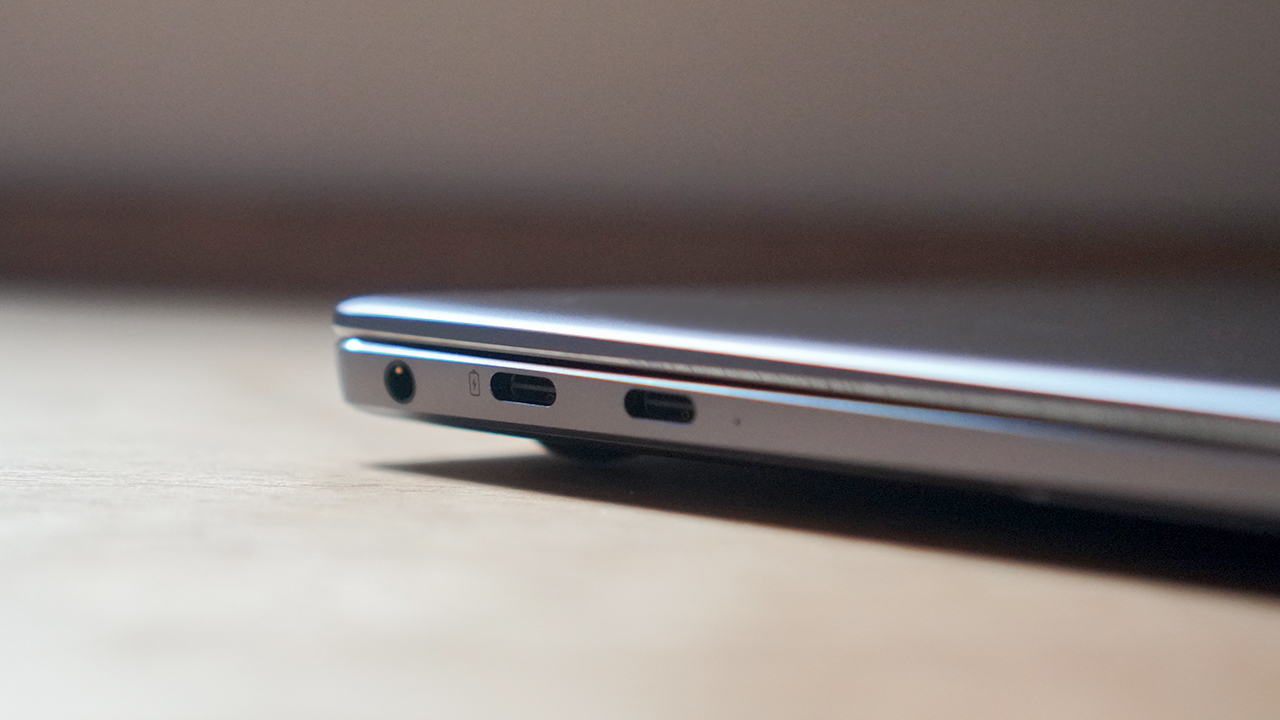 It comes only in the Space Gray color 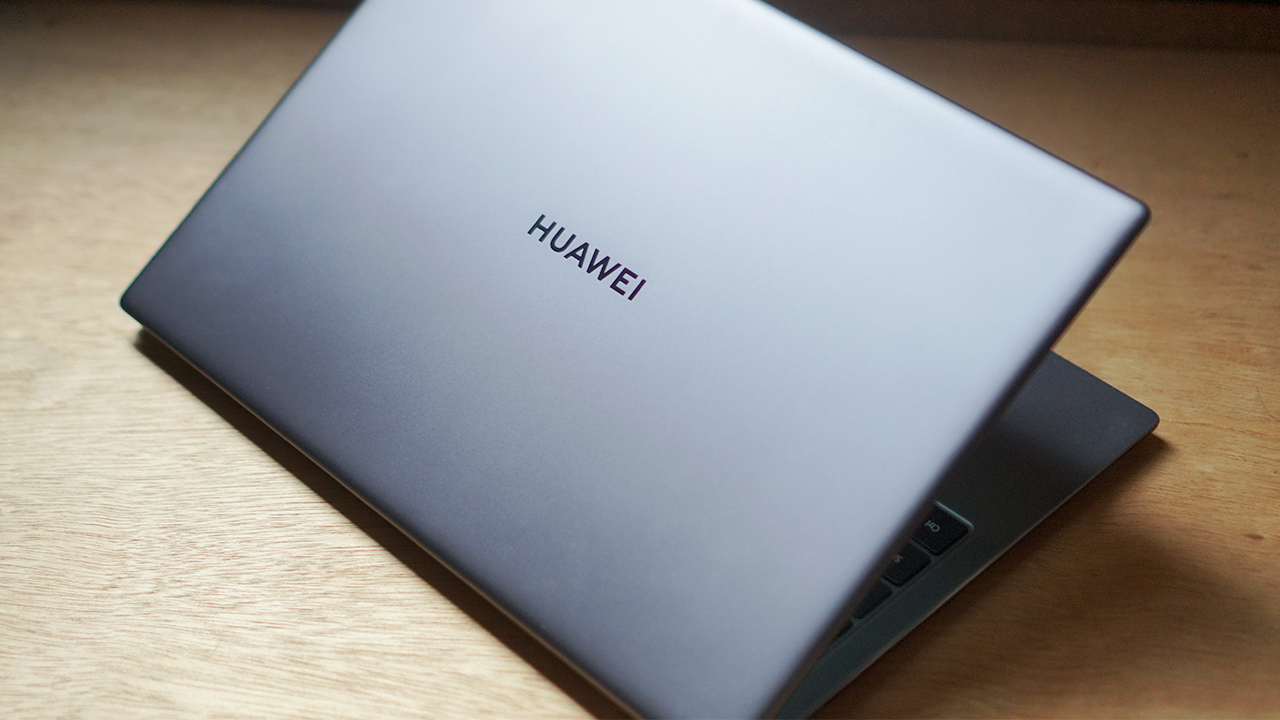 The Huawei Matebook X Pro 2020 comes with the latest, 10th generation Intel Core i7 processor and 16GB of RAM. The new-gen processor does what you’d expect in performance delivery, as most applications run smoothly on the device. I’ve also noticed that the new chip improved the device’s battery life just a little bit. 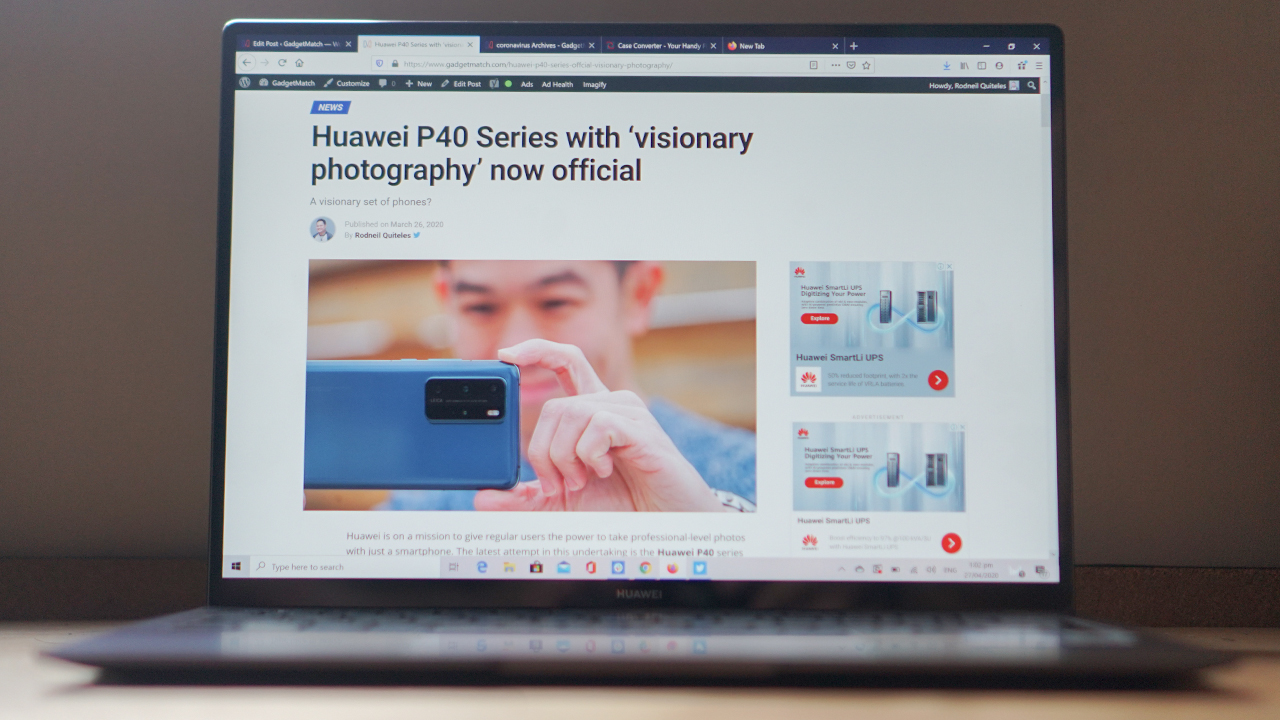 There’s also an NVIDIA MX250 slapped inside this machine to handle beefy graphics work. Data presentation and analytics load quickly, photo and video editing is possible with the device. Render times for videos take a little longer, but that’s also expected from an entry-level graphics card.

You can play games on this device, but don’t expect 60 FPS levels of gaming for it. Casual games like Minecraft and CS:GO will achieve high frame rates, but it’s mostly because these games don’t require a lot of graphic work.

The 13.9-inch display maintains its touchscreen capabilities with 450 nits of brightness at the maximum. The 3:2 aspect ratio on a relatively thin bezel works wonders, and provides a ton of space. The screen is that bright even under direct sunlight, that you can still watch Netflix on your lawn. 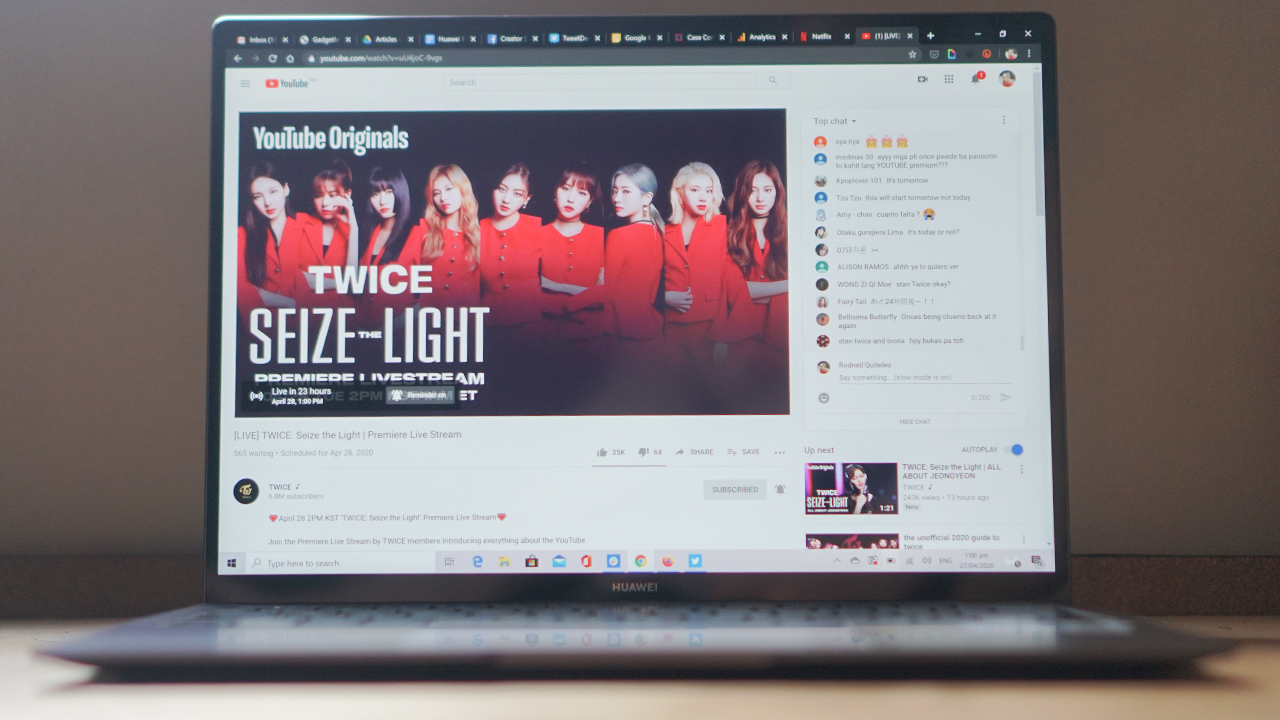 The touchscreen tracked my fingerprints with ease, and there’s even a gray trail to indicate it. It’s honestly my preferred way of scrolling through social media feeds instead of the trackpad. Of course, you might want to clean your hands first before touching your screen if you want to be super clean about it.

Of course, with all that hardware and performance you need some way to keep everything cooled down. The thing is, to maximize performance means that your hardware will crank things up and produce more heat. The goal of a device’s thermal setup is to simply find a way for the hot air to flow out to keep things cool, as long as it doesn’t inconvenience you. 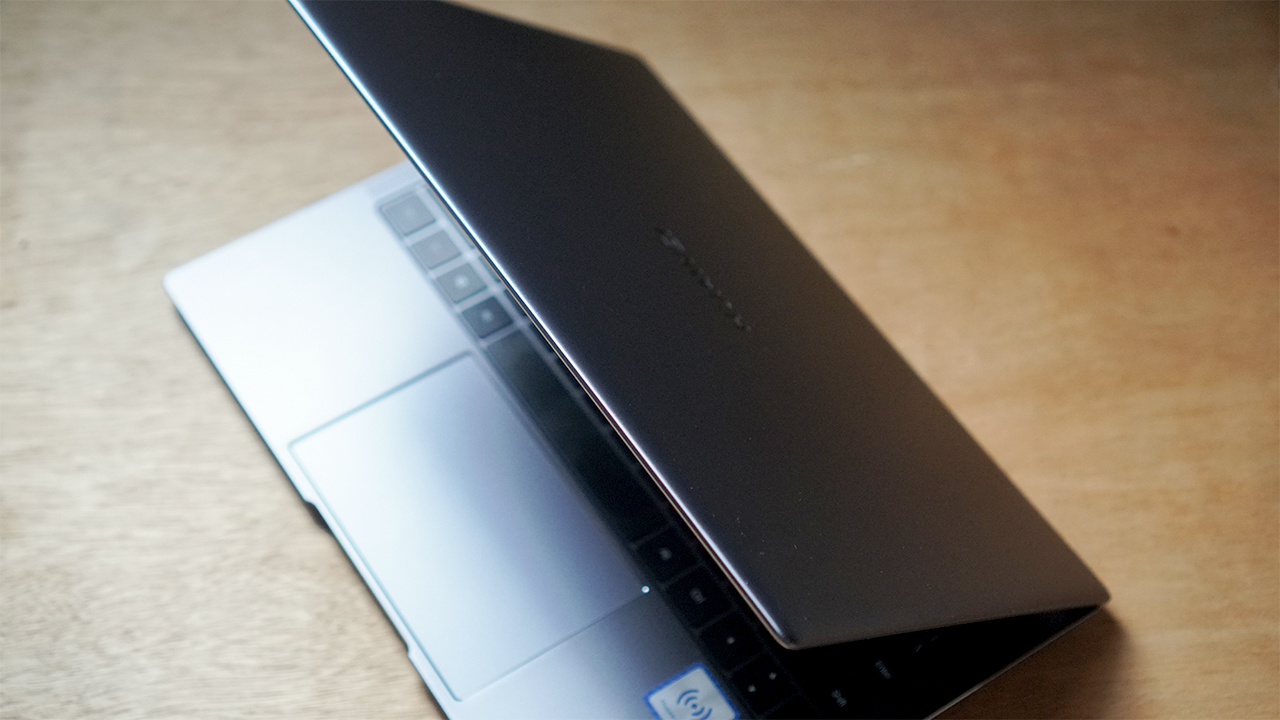 Clearly, the Huawei Matebook X Pro 2020 did not take this into consideration. To be fair, this isn’t the only premium ultrabook that heats up uncomfortably when you’re doing too much. For a laptop, I can’t even recommend you to put this on your laptop when you’re working with 50+ tabs of Chrome open.

However, despite the bonkers of a thermal solution, the device still lasts long, as advertised. I got about close to 12 hours on a single charge when I’m just strictly working on documents, spreadsheets, and web browsing. A laptop that lasts for half a day doing work, for me feels like a luxury when you think about it.

Add other tasks like Netflix streaming, photo and video editing, and that number comes down to 10 hours. It’s pretty good, especially for a thin and light device like the Matebook X Pro 2020, especially for a 56Wh battery. 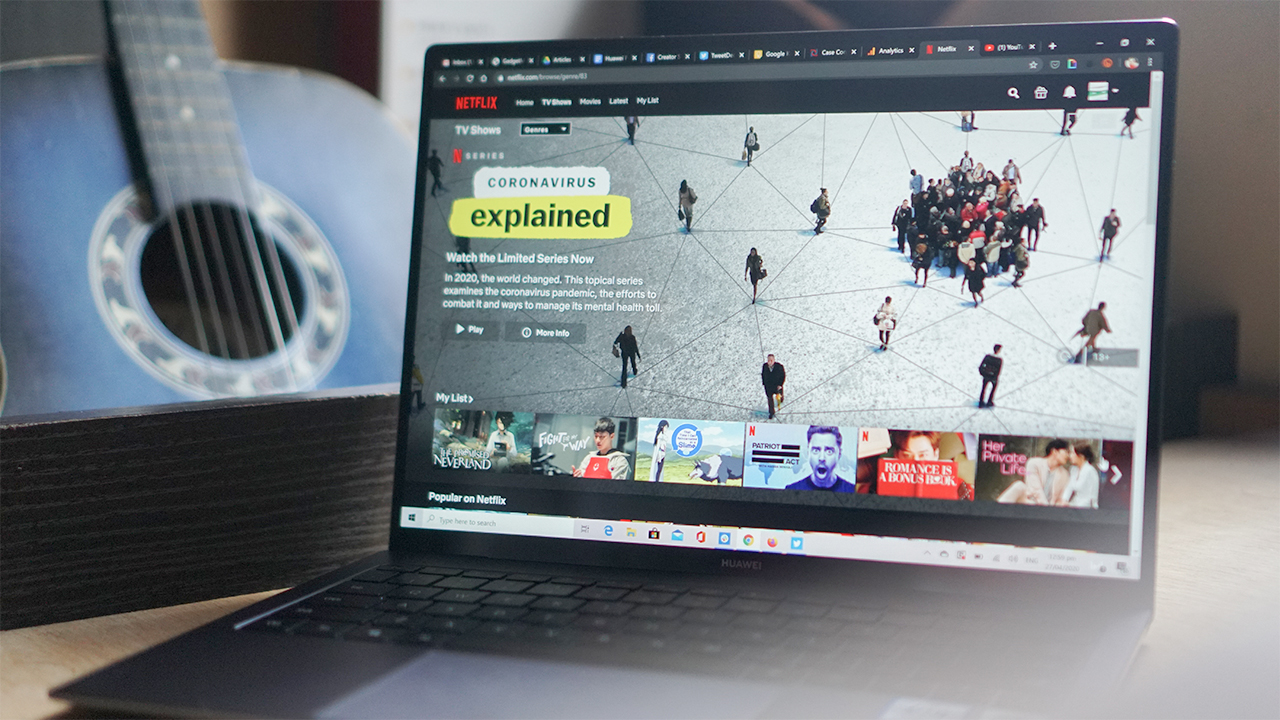 One full charge took about two and a half hours, which is pretty standard for the USB-C Thunderbolt 3 port. You can opt to charge it with a capable power bank or a smartphone that comes with an OTG feature. I just pray that your phone won’t explode from the heat. 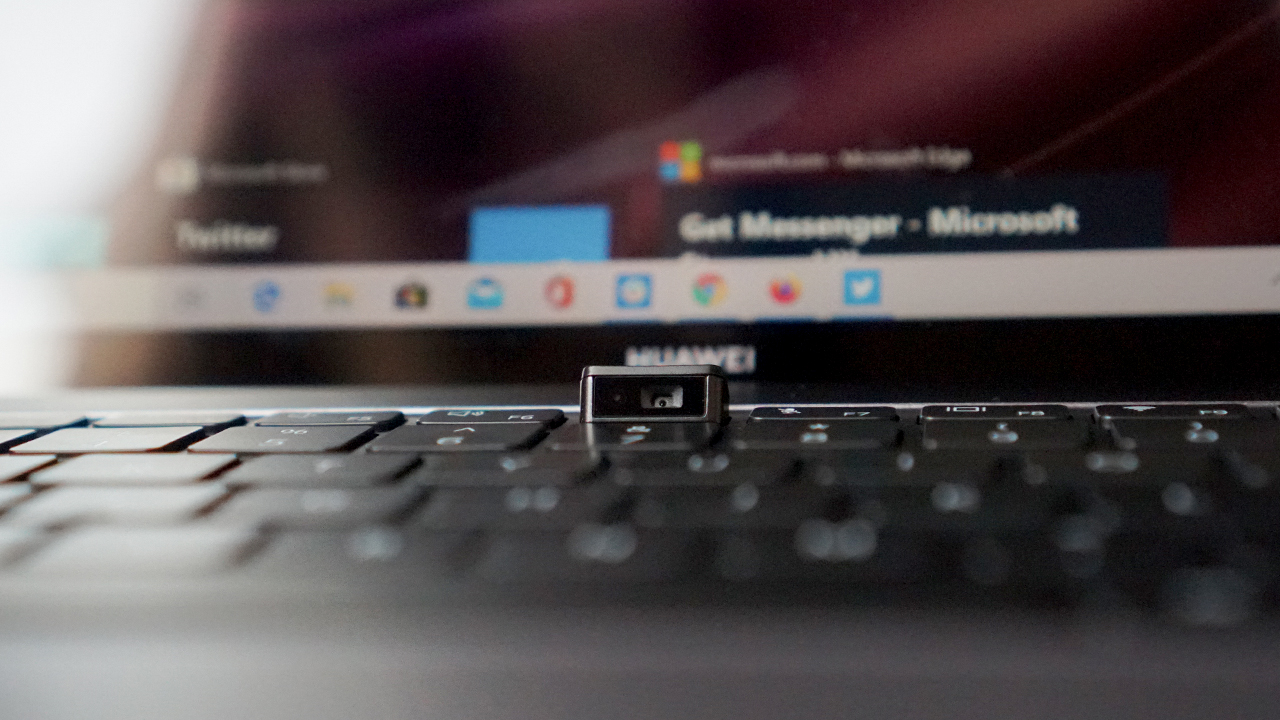 There were a lot of other things they kept in the device that still prove to be a boom or bust situation. One of these was the pop-up 1MP camera in between the F6 and F7 keys; it’s decent except that it points upward to your nose. At least there’s more space on the display, which is honestly the way I prefer my bezel-less display. 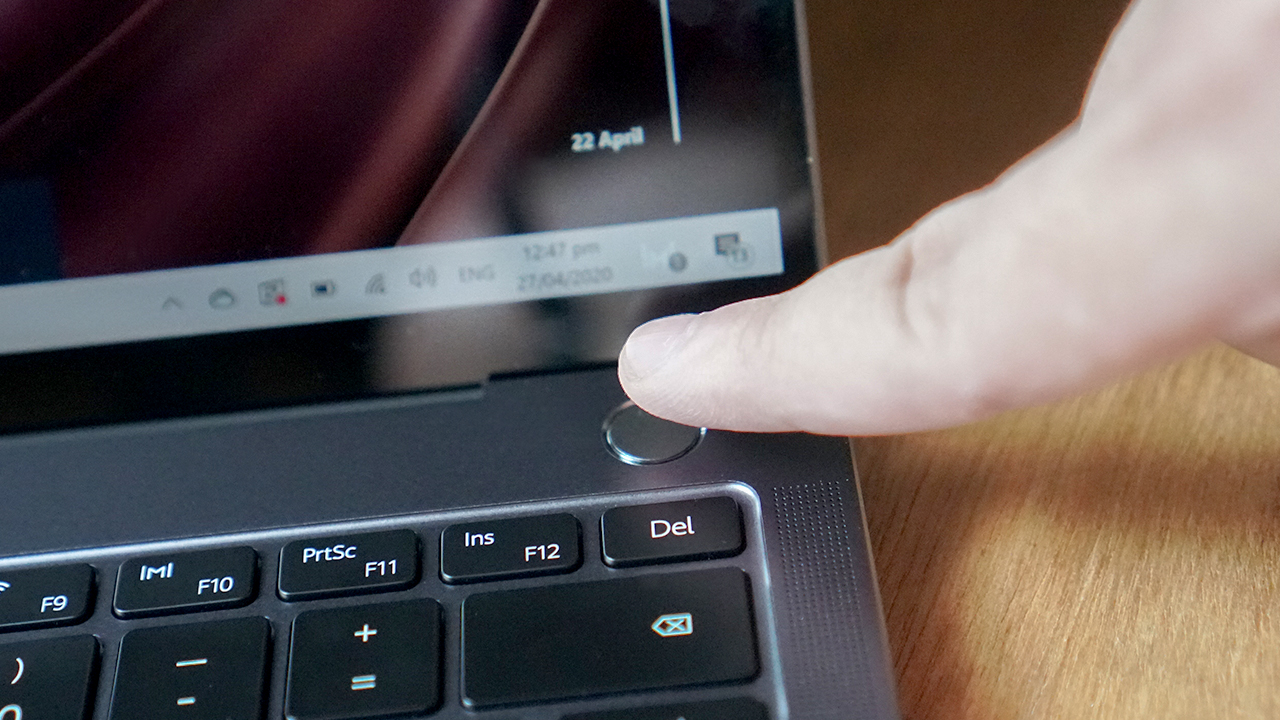 Next would be the keyboard, which has good key travel but it feels like a certain Butterfly switch. The fingerprint sensor, which is placed on the power button, was a nice touch. They managed to make the tracking relatively easy, and it unlocks the device quickly.

Is the Matebook X Pro 2020 your GadgetMatch?

At PhP 119,999, the Huawei Matebook X Pro 2020 provides consistent performance from last year’s model, even with the improved hardware inside. They stayed true to the whole “don’t fix what isn’t broken” schtick, and it continues to pay off in full. It also lasts long for work-related purposes, which is a premium in that regard. 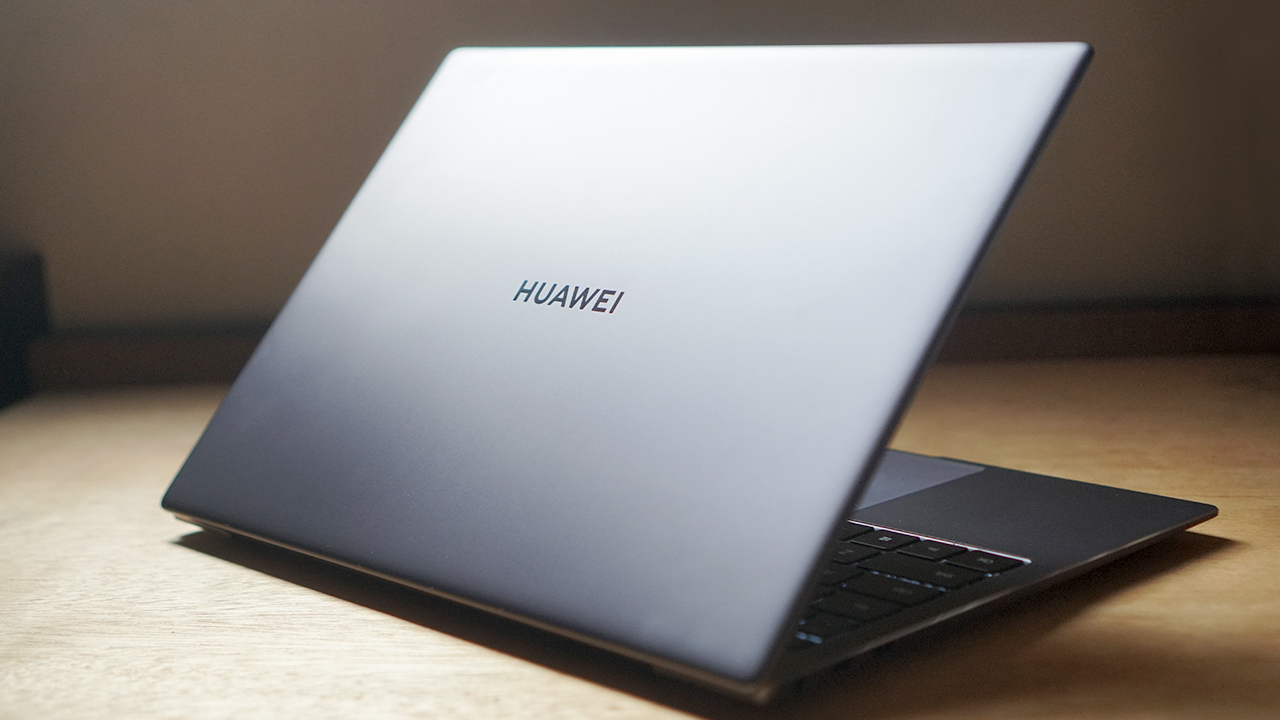 There are the expected downsides to a device like this, with thermals being the most obvious one. But that’s pretty much the trade-off of having your hardware perform at a high level. Despite this, the device is still top-notch and worth the investment. 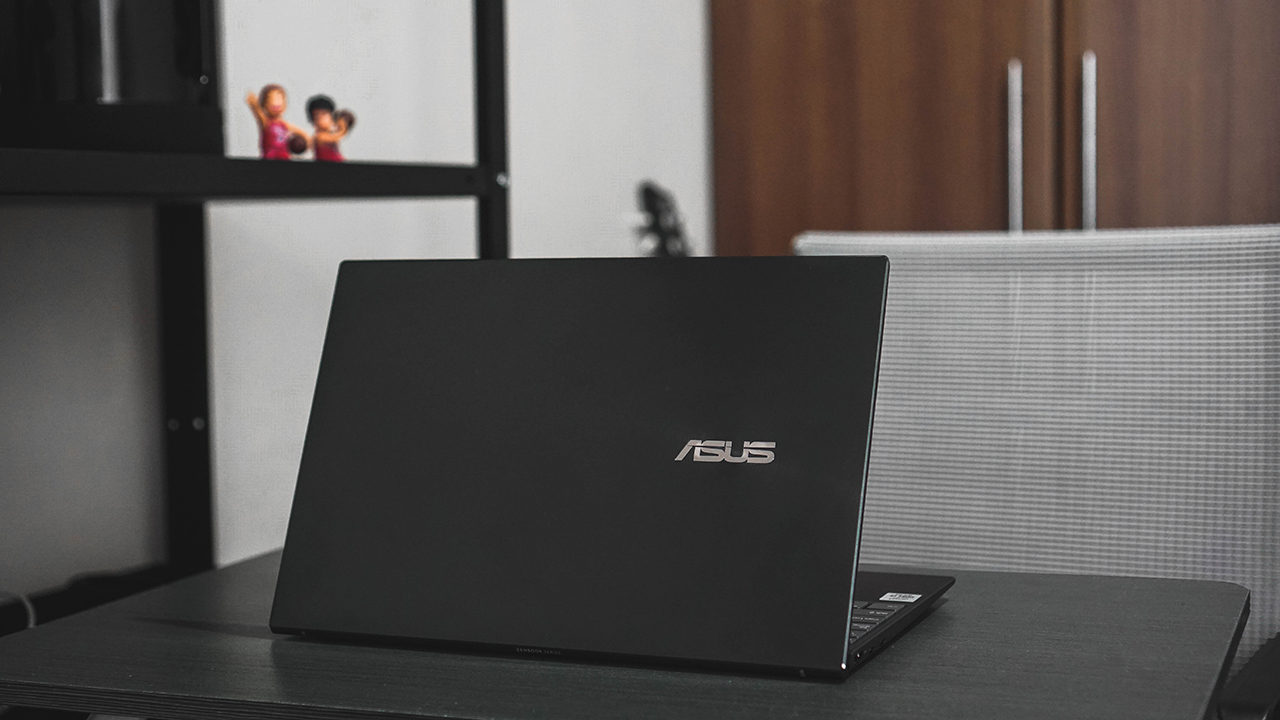 The problem with ultra slim laptops has always been their lack of ports and generally shaky battery life. Such a problem does not exist with the ASUS ZenBook 13.

It’s the latest on ASUS’ ZenBook line and it combines the portability of ultra slim notebooks with the port versatility and long-lasting battery life of typically larger laptops.

What’s in the box?

Immediately after taking things out of the box, you’ll see how the ZenBook 13 is a complete package. It comes with two cables to compensate for the ones that you don’t find built in on the laptop. 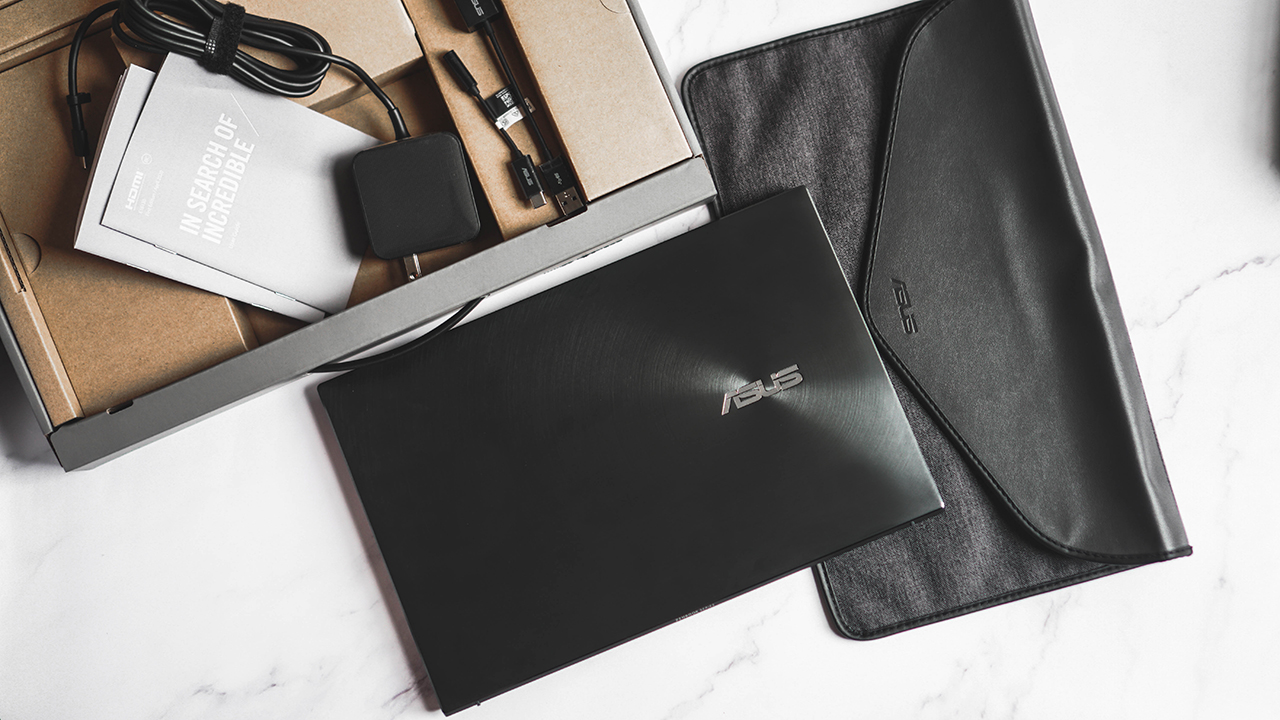 There’s a USB to Ethernet port connector, and a USB-C to 3.5mm jack for your audio needs. Rounding up the packaging are the ZenBook 13 itself, your power brick, and a nice and sleek laptop sleeve.

So about those ports

Measuring at just 13.9mm and 1.07kg — this notebook is REALLY thin and light. Normally, laptops like these have one or two USB-C/Thunderbolt 3 ports. Well, this one, certainly has more. 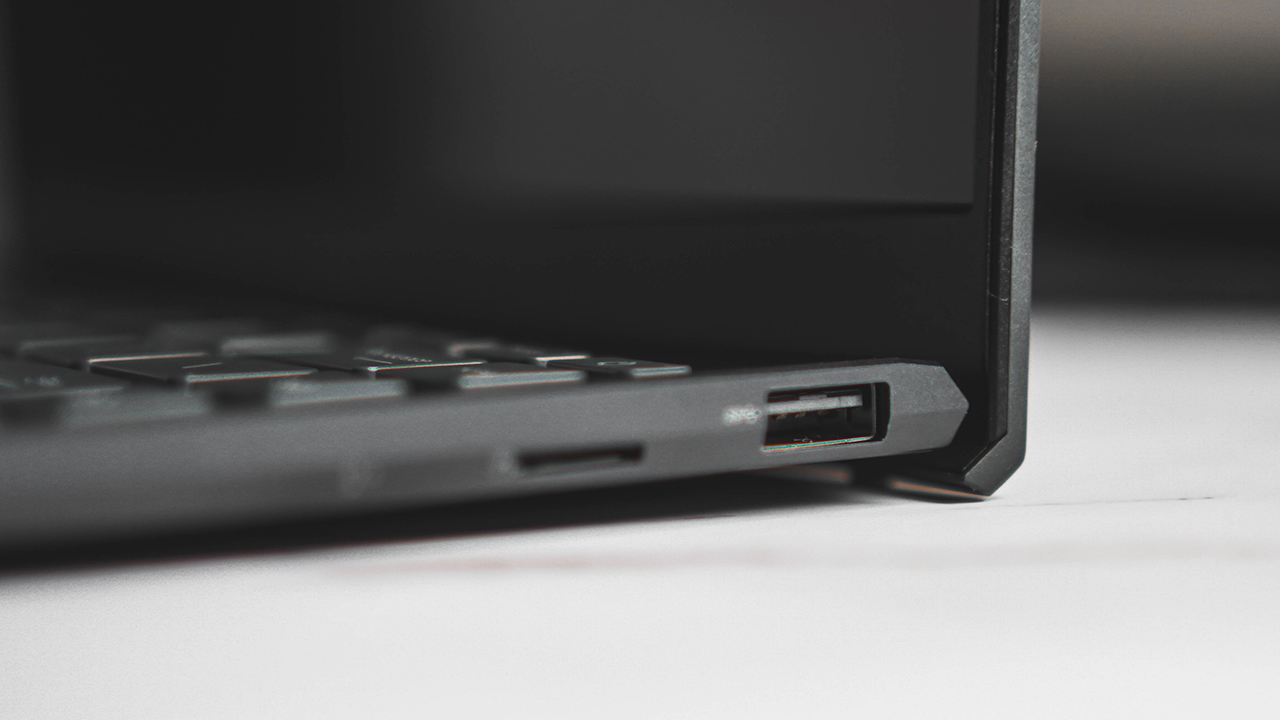 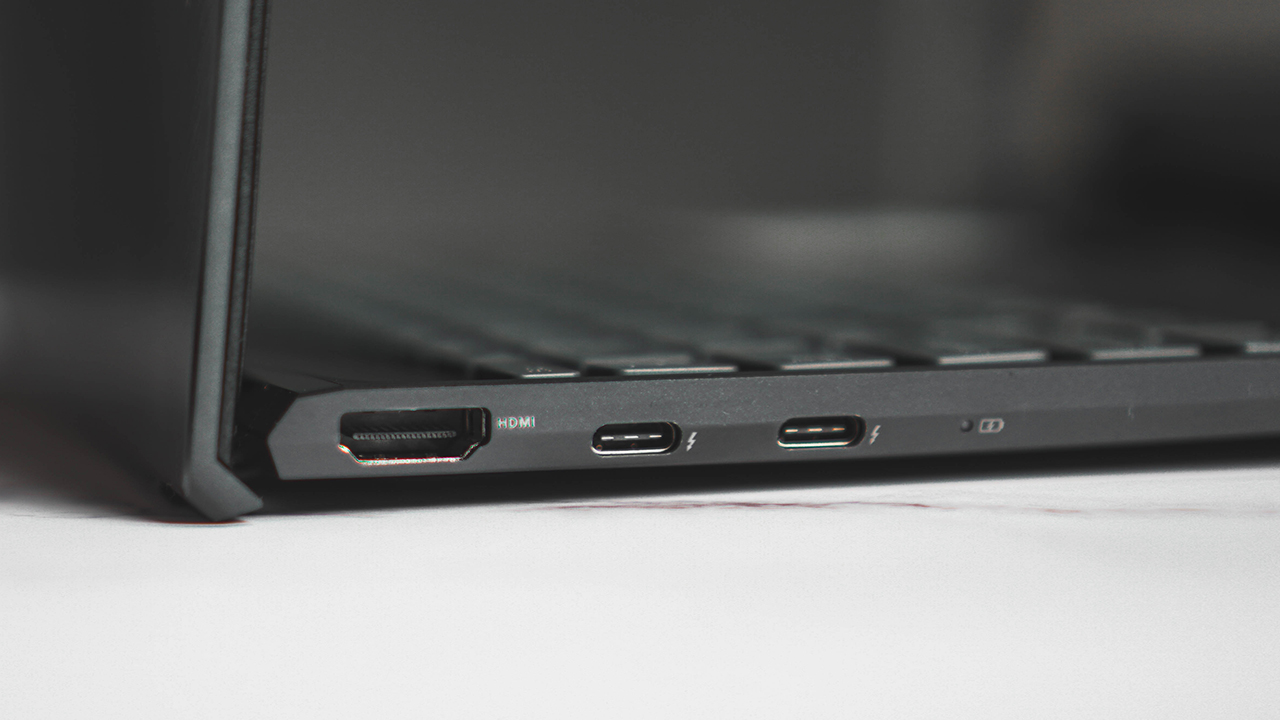 The ZenBook 13 can draw power from either USB-C/Thunderbolt port and you can easily connect it to an external monitor through the HDMI port should you need to.

The microSD card slot and USB ports means you can easily transfer files from external sources.

Elsewhere on the laptop is the webcam — a must now that we have to attend virtual meetings. 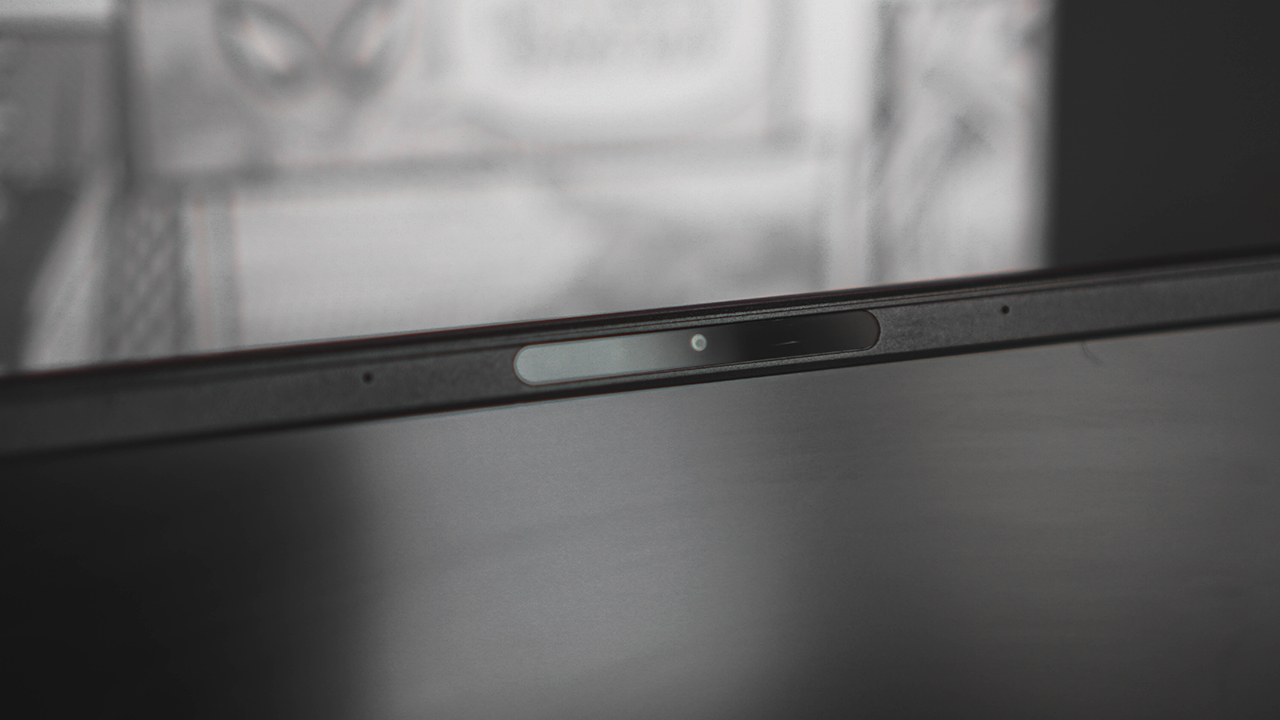 Oh and it also has ASUS’ signature Ergo-lift hinge that remains satisfying to both look at and feel as you lift the laptop lead. A really nice touch and adds to that overall Zen feeling.

The ergo-lift hinge is sooooo satisfying

A workhorse of a notebook

Don’t let its slight build fool you. This notebook is tough and packs some serious punch to power you for work.

Inside is a 10th Gen Intel Core i5 processor with an 8GB LPDDR4x RAM and 512GB of  SSD storage. That’s the perfect combination for a laptop that can stay with you shuffle through Word documents, Excel sheets, Powerpoint presentations, and even Photoshop. 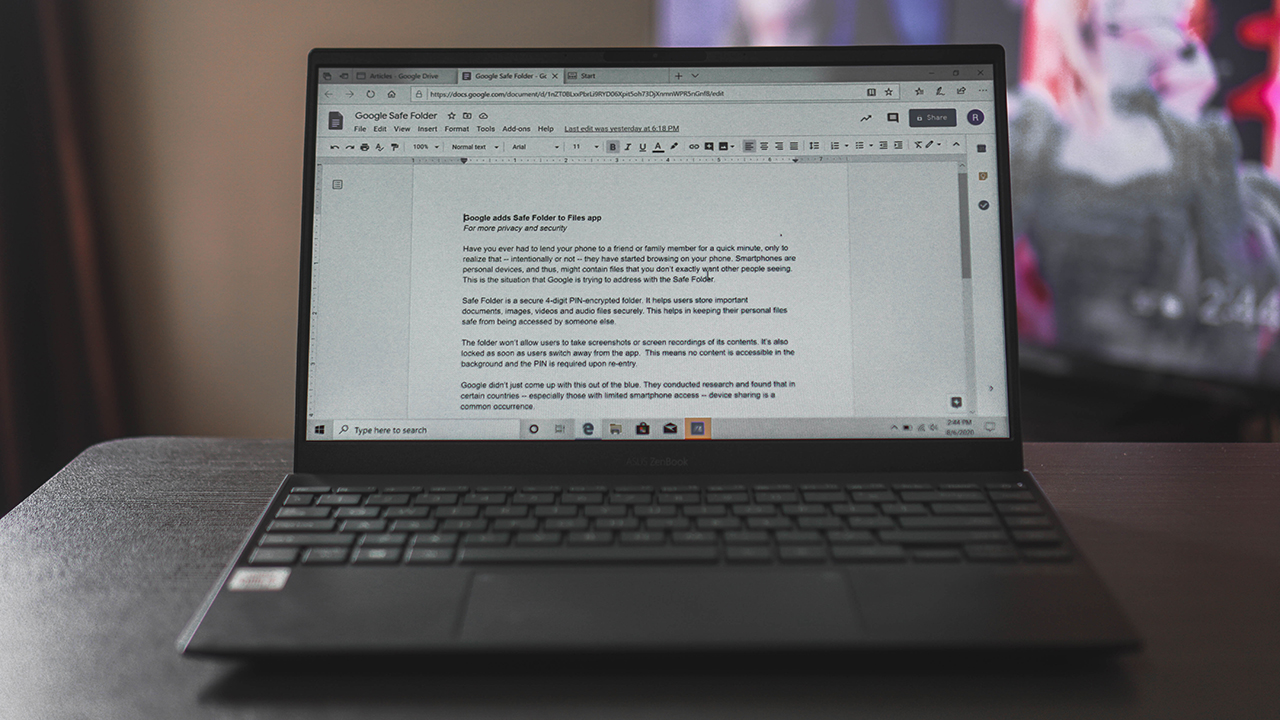 The keyboard is edge-to-edge giving you that full-size experience. It’s also clickety, giving a satisfying travel experience — crucial if you have to type on it for hours.

Speaking of full-keyboard, the trackpad transforms into a digital numpad at the click of a button. It’s a signature ASUS feature and if you’re the type who has to fill in numbers a lot, this should prove to be hugely beneficial. 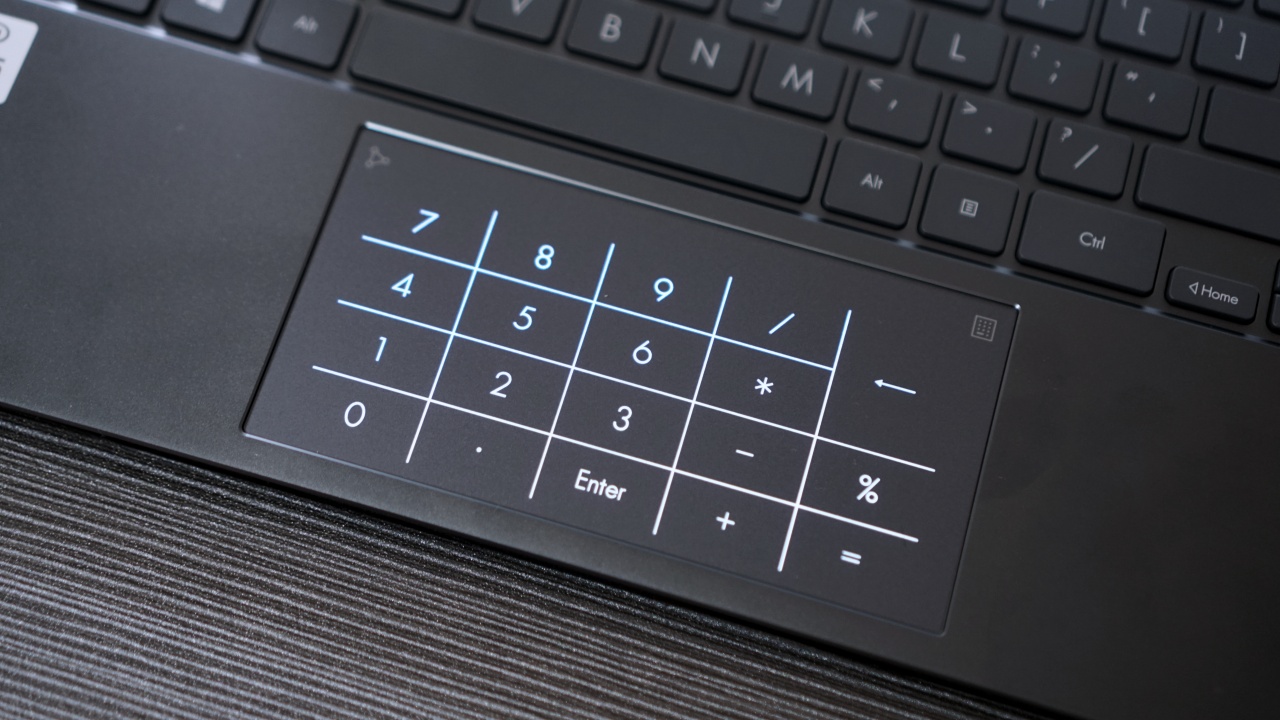 From trackpad to numpad real quick

What do people say again about all work and no play? It makes you dull. That’s why after work, the ZenBook 13, which promises up to 22 freaking hours of battery life, can also be your entertainment companion as you wind down. 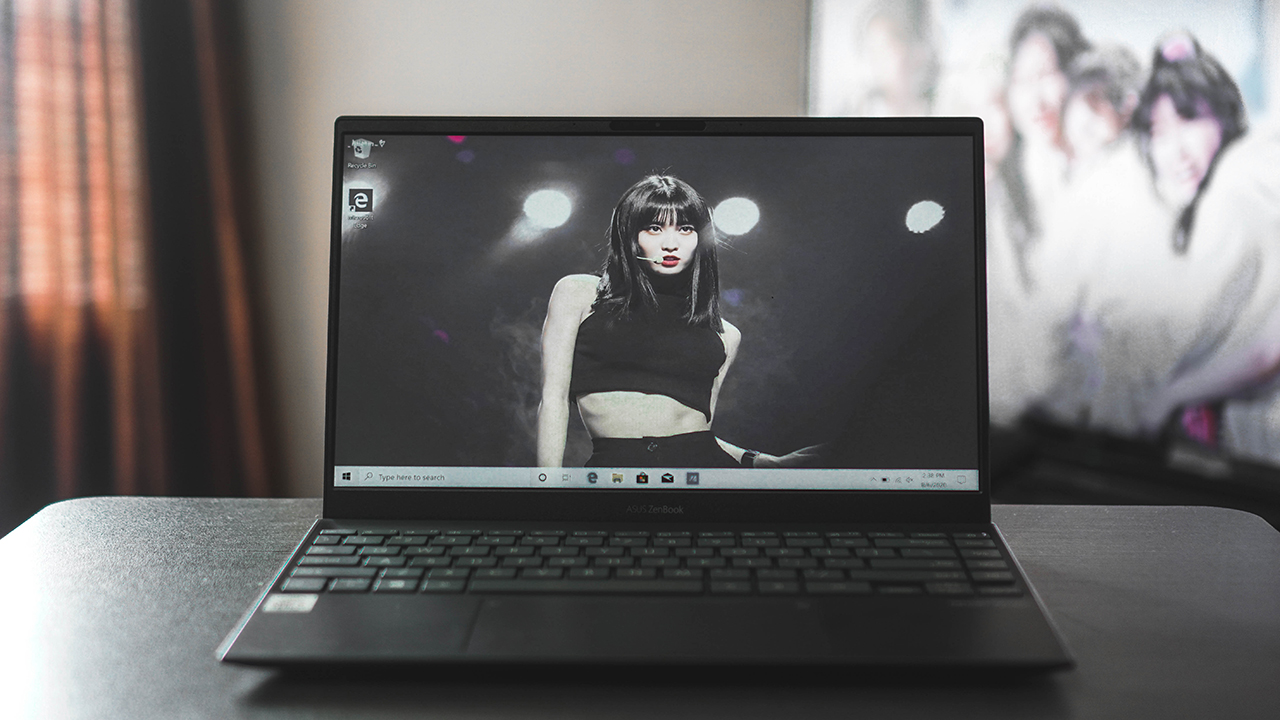 It has a frameless four-sided NanoEdge display. This means no pesky bezels to get in the way of your binge-watching. 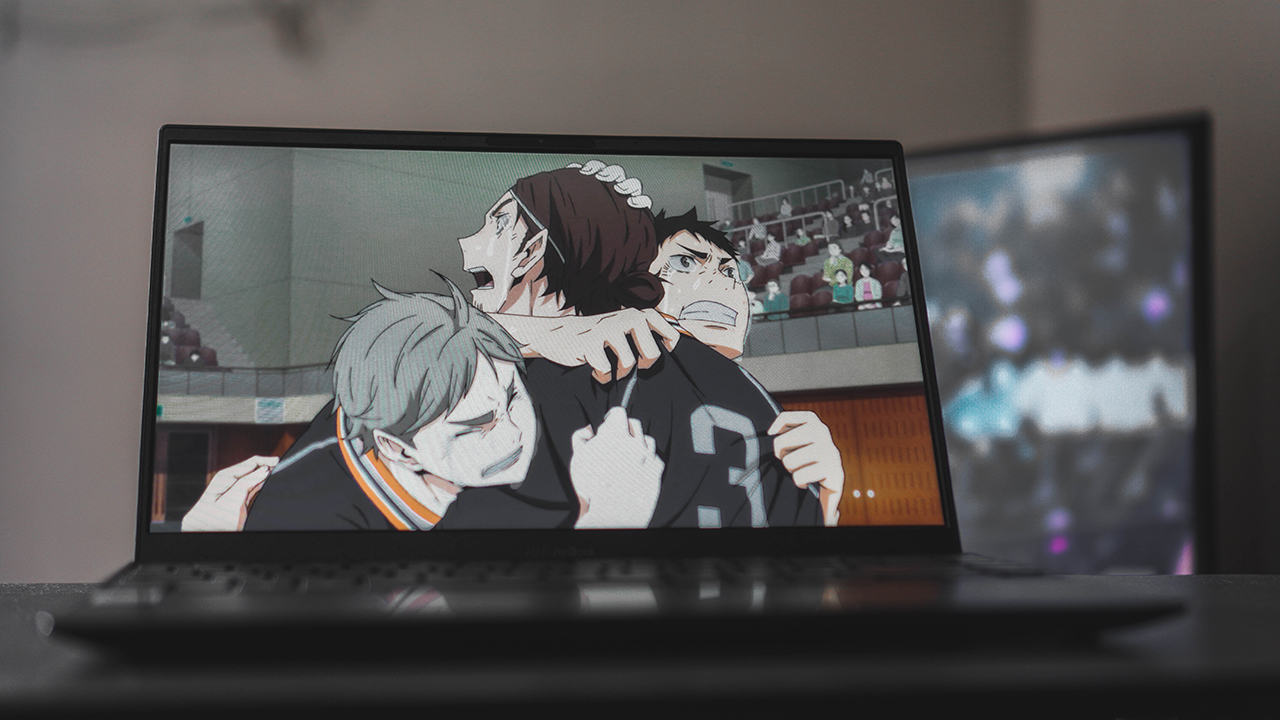 Whether that’s watching Karasuno win a match or catching up with Midoriya and Bakugo’s hero-in-the-making adventures. 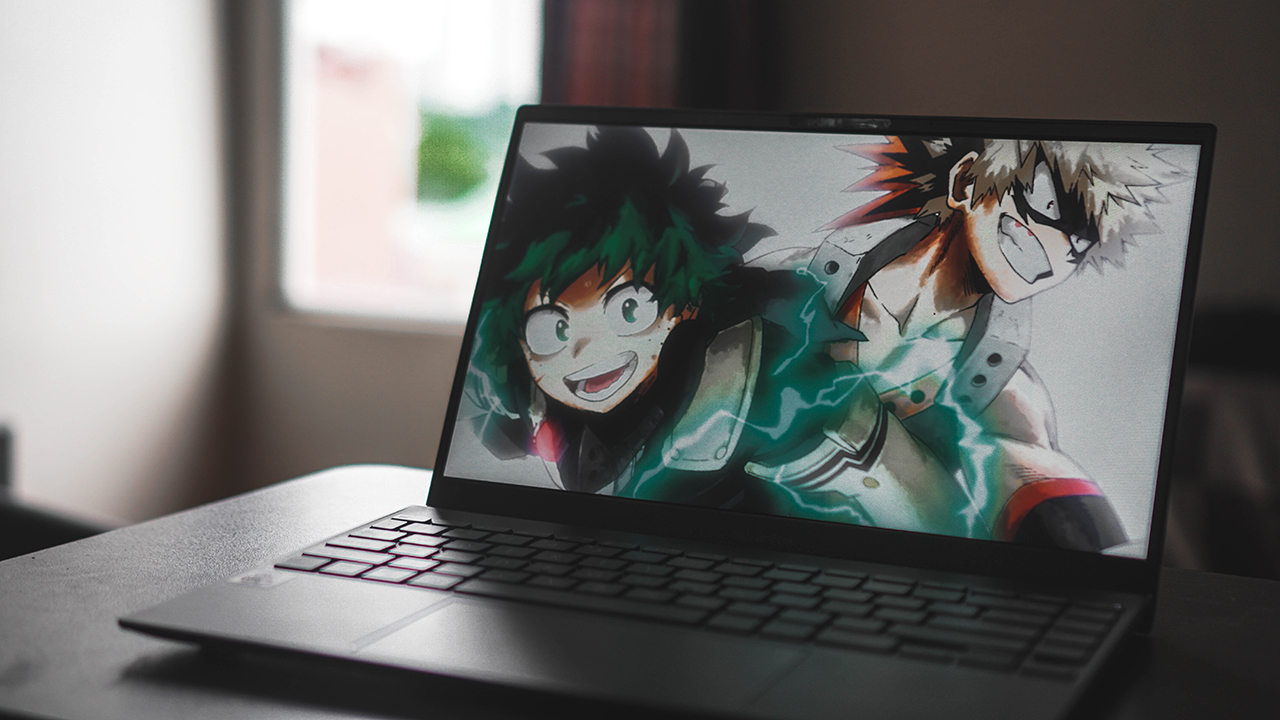 Slim and light, versatile, long-lasting, and performs just as good as other larger laptops. All these make the ASUS ZenBook 13 an all-arounder that will meet all your work and winding down needs. 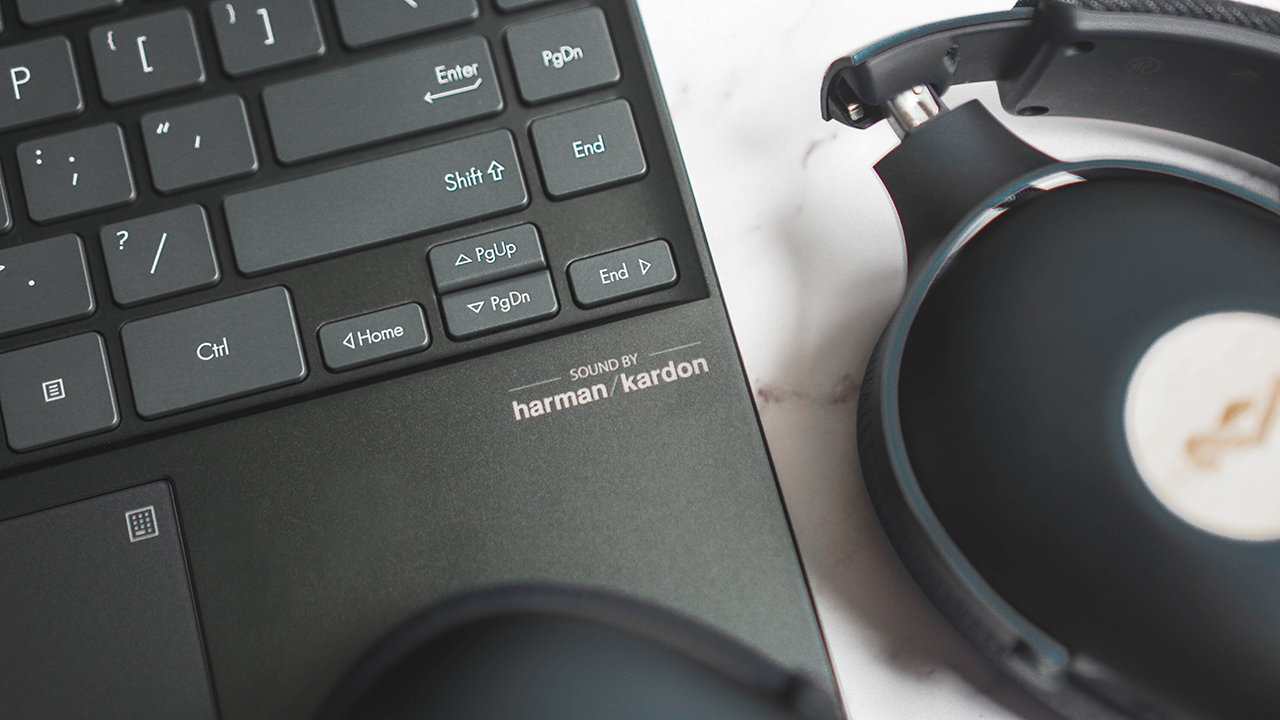 As we continue to deal with the stresses of the new normal, the ZenBook 13 is a handy companion that you can bring with you, wherever you are around the house. 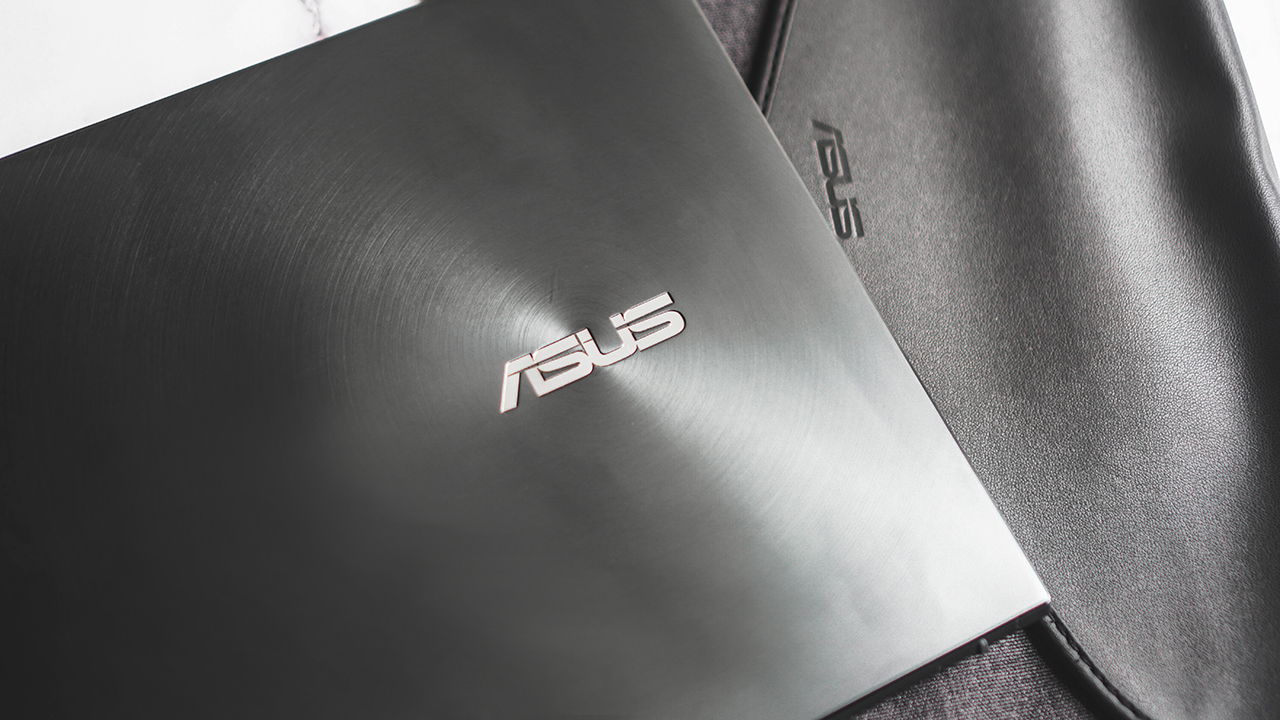 As we hope for things to open up soon, this notebook is also ready to go out with you to give you all the productivity and play support you can ever ask for.

This feature is a collaboration between GadgetMatch and ASUS Philippines. 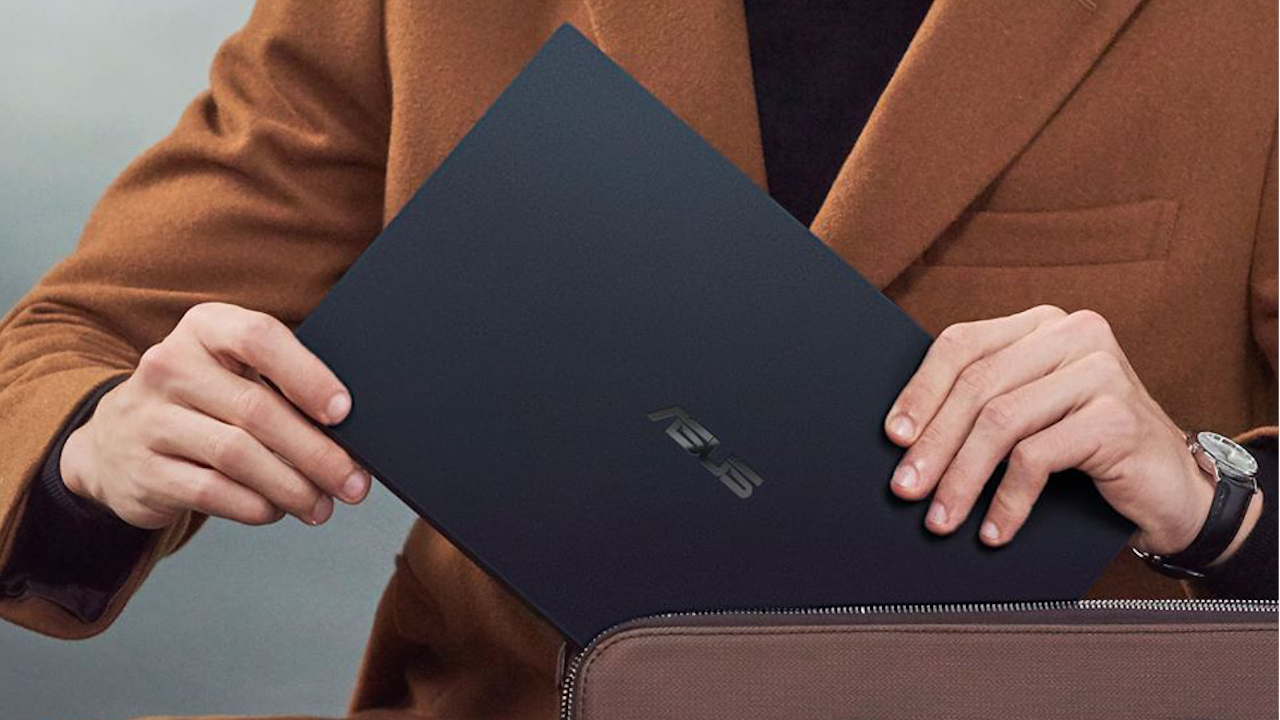 Perhaps you might be looking to upgrade your laptop as you continue working or learning from home. ASUS is participating in Shopee 8.8 sale. During the sale, you can score commercial laptops with up to PhP 2,000 off their retail price.

ASUS laptops participating in the sale include their ExpertBook lineup. Business-grade desktops will also go on sale. As for the sale, ASUS will offer a pre-hype sale which is happening from July 23 to August 7. The main sale event will happen on August 8 from 12 am until midnight.

Here is the complete lineup of laptops on sale:

Availing these laptops is as easy as heading over to ASUS Philippines’ official Shopee store. For more information about ASUS’ latest promos, visit their official Facebook, Twitter, and Instagram page.