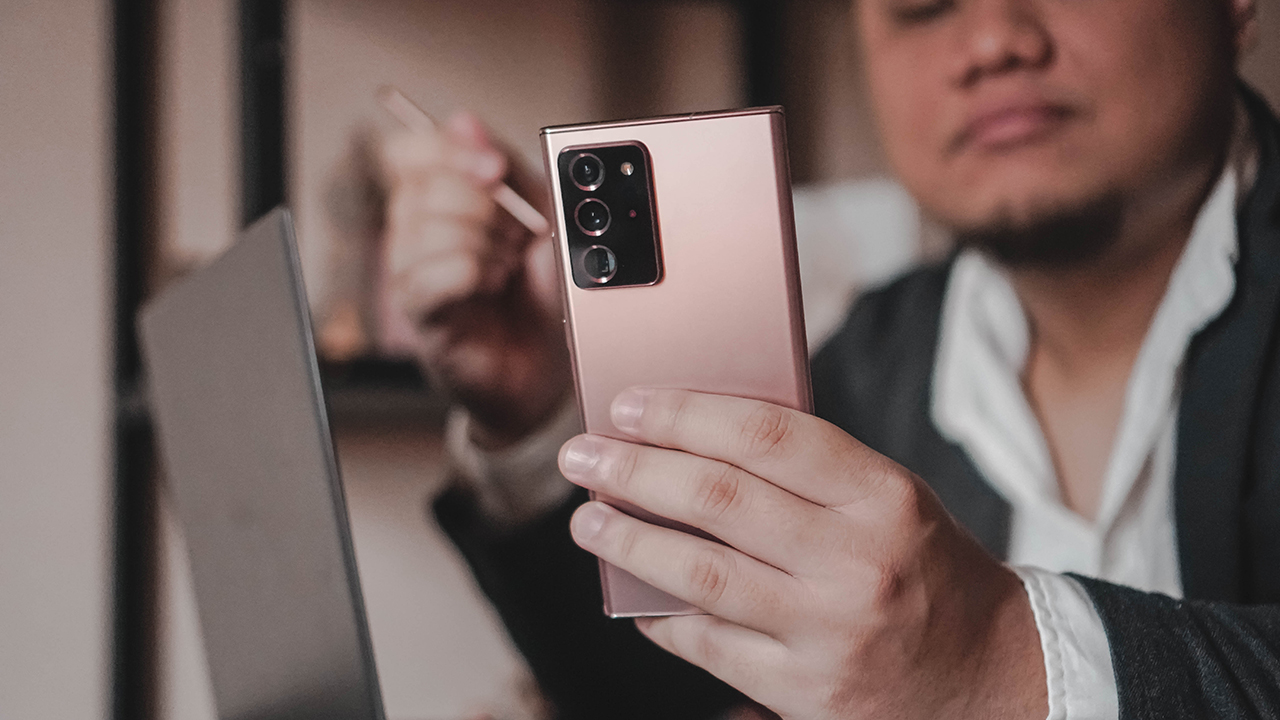 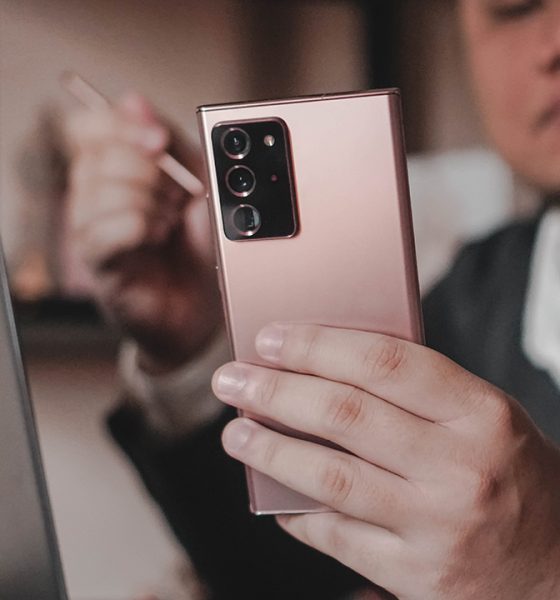 Perfect phone for the team leader?

The Samsung Galaxy Note 20 Ultra represents the current pinnacle of the Galaxy Note line. That’s why it’s not far fetched to think that it can seamlessly add value to people from different walks of life.

In this first of a three-part feature, we’ll explore how the Galaxy Note 20 Ultra can be reliable partner for three specific people:

Having the ‘Manager’ title entails a lot of things. But more than anything, it’s a balancing act: juggling tasks, weighing interests, and considering several options. Having the right device to let you… manage, and give you one less thing to think about goes a long way.

In many ways that’s what the Samsung Galaxy Note 20 Ultra is — a device so good at so many things that you don’t have to worry whether it can do something or not. It just works.

On any given day, I’m jumping from app to app, doing anything and everything from answering emails, coordinating via chat apps, taking unexpected calls, copy-editing, sharing stuff on social media, and also going on zoom meetings/events. When I said the work involved a lot of juggling tasks, I wasn’t exaggerating. 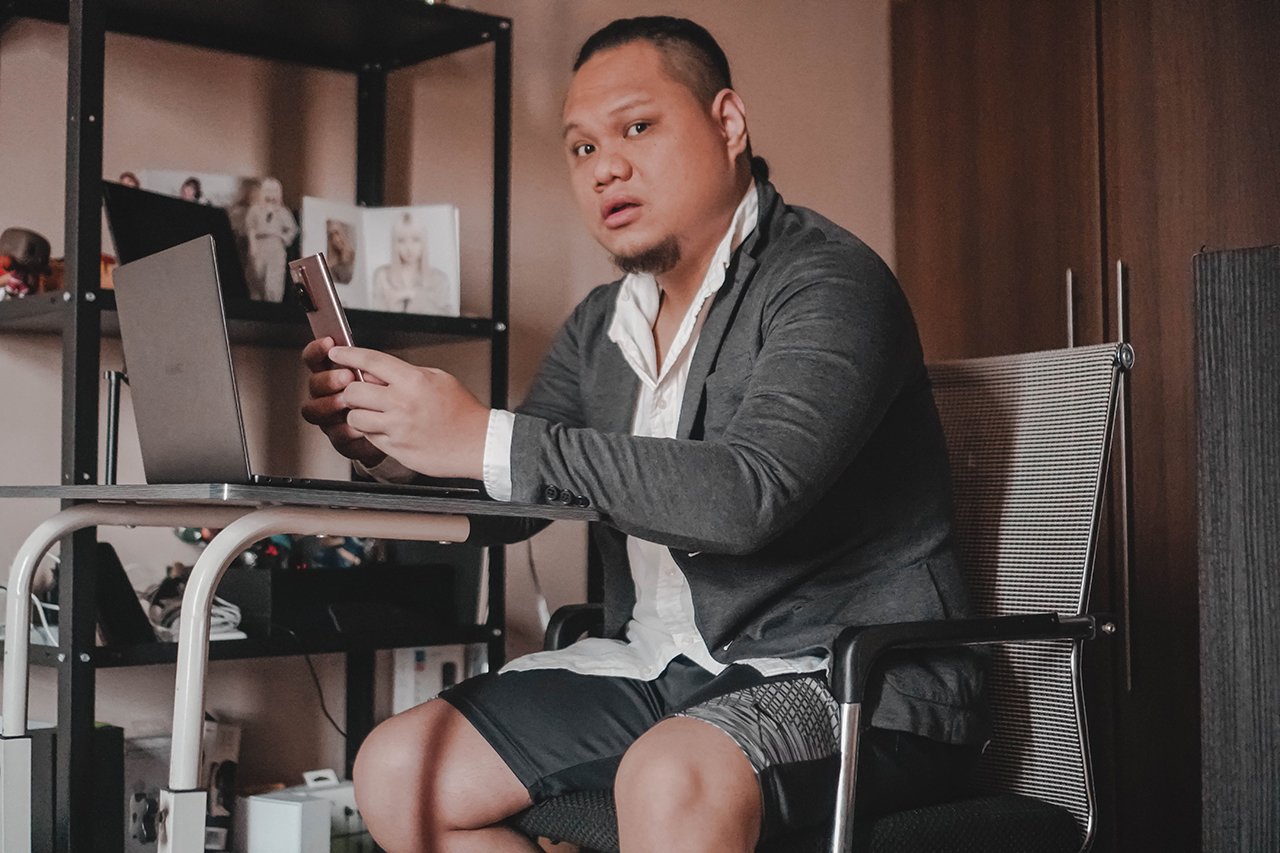 Thankfully, I shared a good chunk of these days with the Galaxy Note 20 Ultra. With it, I didn’t have to worry about whether my phone would conk out on me out of nowhere.

During random afternoons where my lower back would hurt, I can leave my laptop for a while and do all my work on the phone. Yes, that includes writing and copy-editing. The large 6.9-inch display is as close to tablet territory as you can get on a device that’s still somewhat pocketable.

It’s the perfect size for tasks that need plenty of screen real estate. 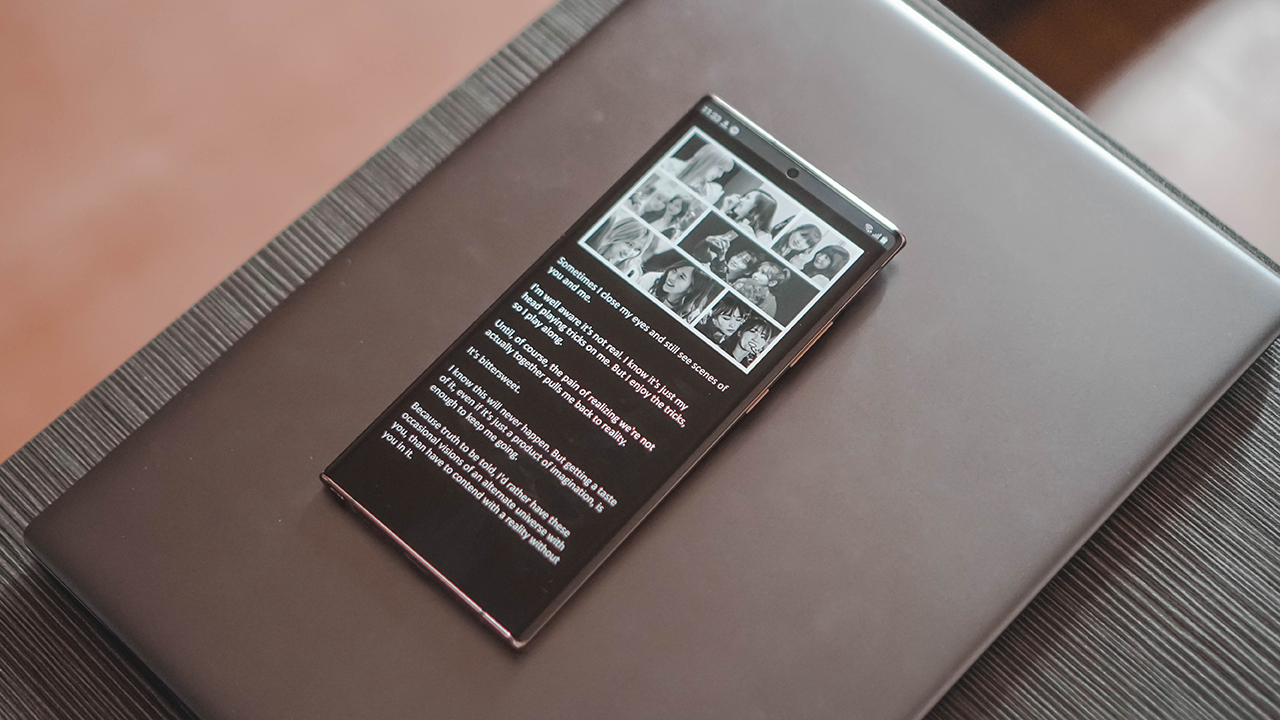 Not an actual article lol

This is true as well for some basic video editing. I hadn’t fully adjusted to any video editing app on Windows (I’ve mostly used Final Cut on Mac), but that’s not the case on Android. I’ve primarily been using CapCut, and the large display again comes into play in making video edits relatively easy even with my stubby fingers. 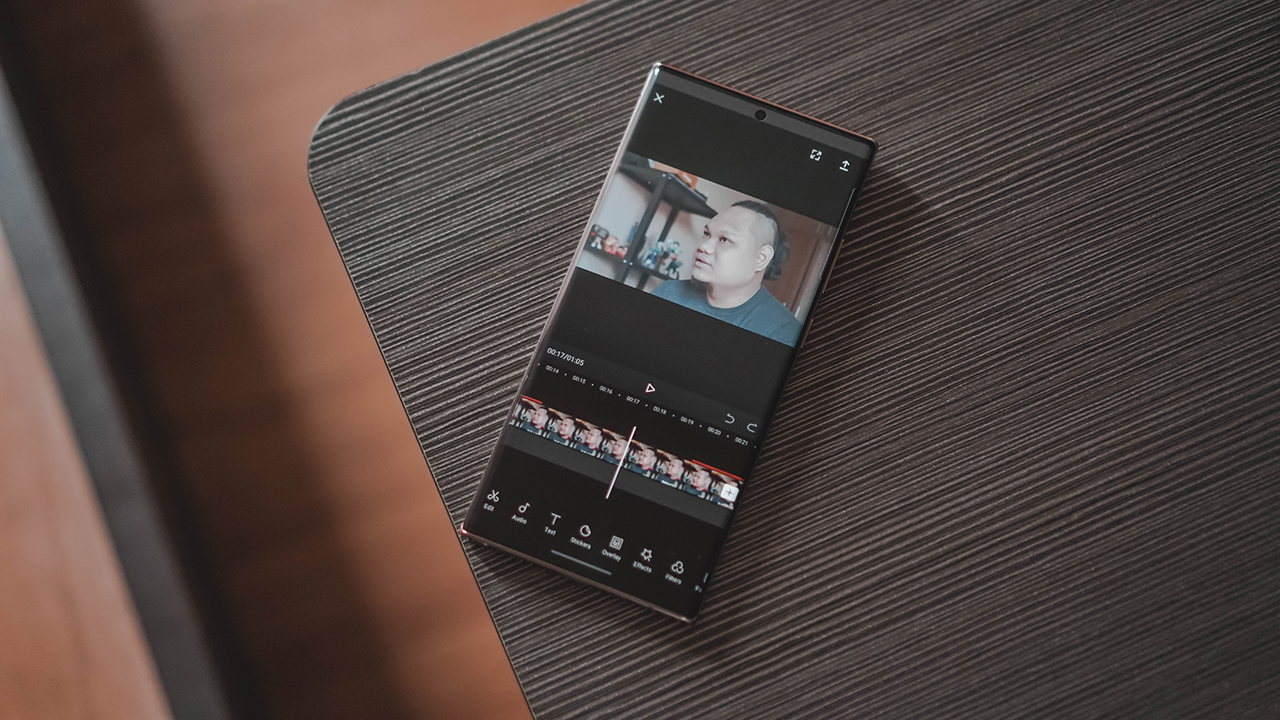 Video editing is less cumbersome on a bigger display

The processor, RAM, and storage naturally all played a part in this as well. Tackling all these tasks hiccup free won’t be possible without the 12GB+512GB combo as well as the Exynos 990 chip equipped on the unit I used.

What stood out to me on the Galaxy Note 20 Ultra is just the overall polish of the device. At this point, we’ve all seen the design and the majestic look of the copper variant. But the polish goes beyond its physical look.

Samsung’s move from TouchWiz to ONE UI has been one of the best things to ever happen to the brand’s smartphone line. TouchWiz borderline unbearable. Meanwhile, ONE UI is as smooth and clean an experience as you’re going to get. 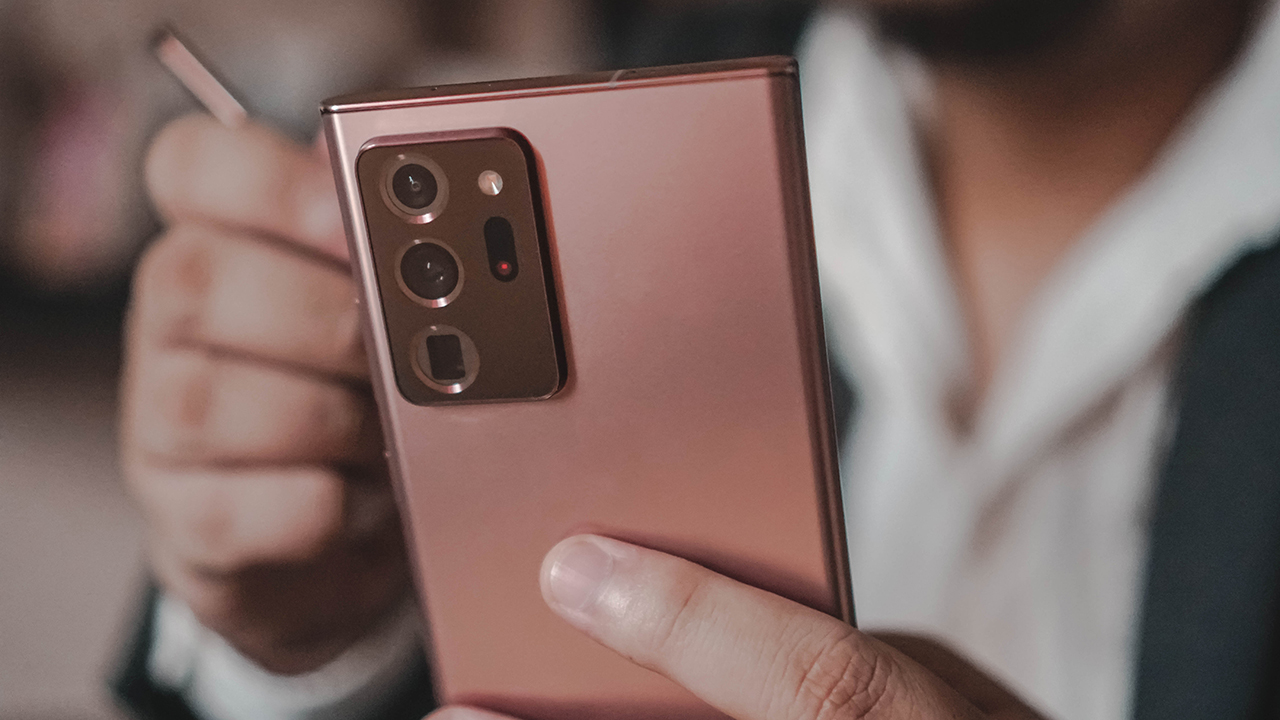 The UI plays a huge part in our interactions with our phones. And Samsung’s ONE UI does all these little things that truly make it easy to use.

I can long press on an app and immediately jump to a task or a conversation that I had left off. Switching from a paired bluetooth speaker to a bluetooth headset, and to the phone’s own speakers is seamless with the SmartThings app working in the background. 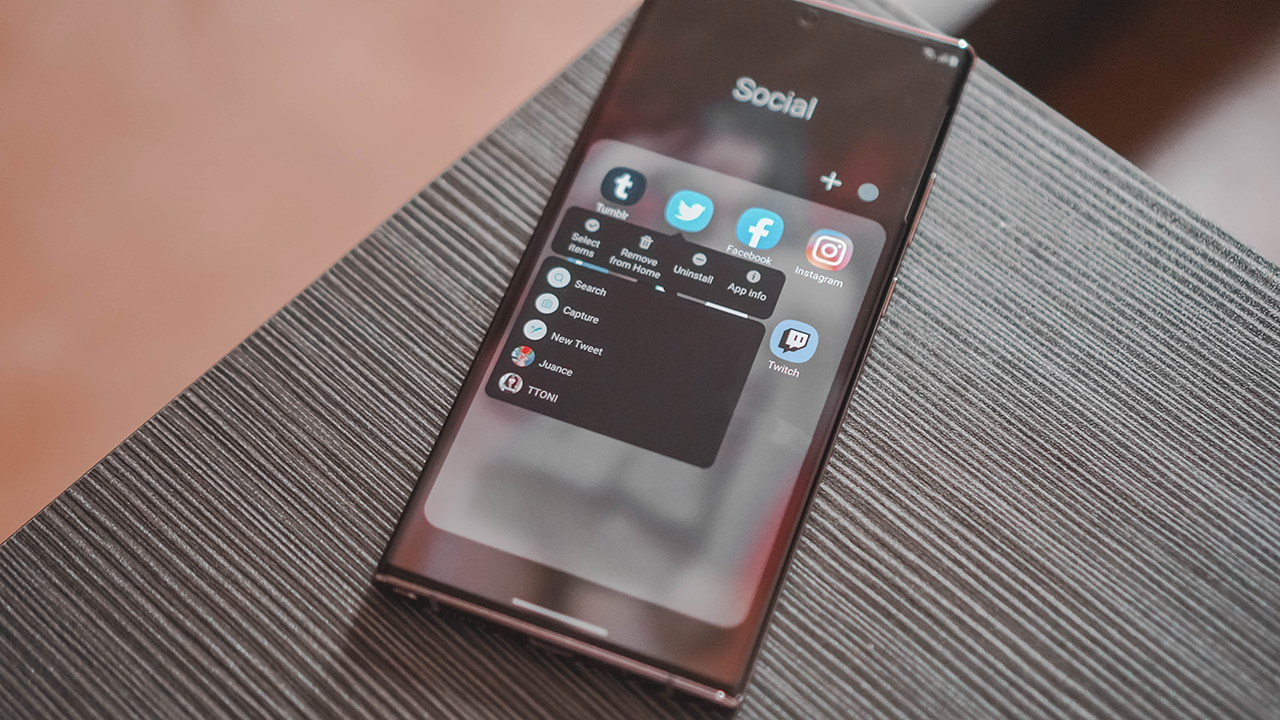 These quick actions are really nice

These little things are easy to miss or take for granted if you’ve only ever used a Samsung phone, but for us who jump from phone-to-phone due to the nature of our work, it’s such a welcome thing.

Things I wish I could have used more

There are two things on the Galaxy Note 20 Ultra that truly make it stand out against other phones. Unfortunately, those are the two things I barely used.

The S Pen is the Galaxy Note’s headline feature. It’s improved over the years and will continue to do so as the Galaxy Note line evolves. But I found little use for it in my day-to-day life. 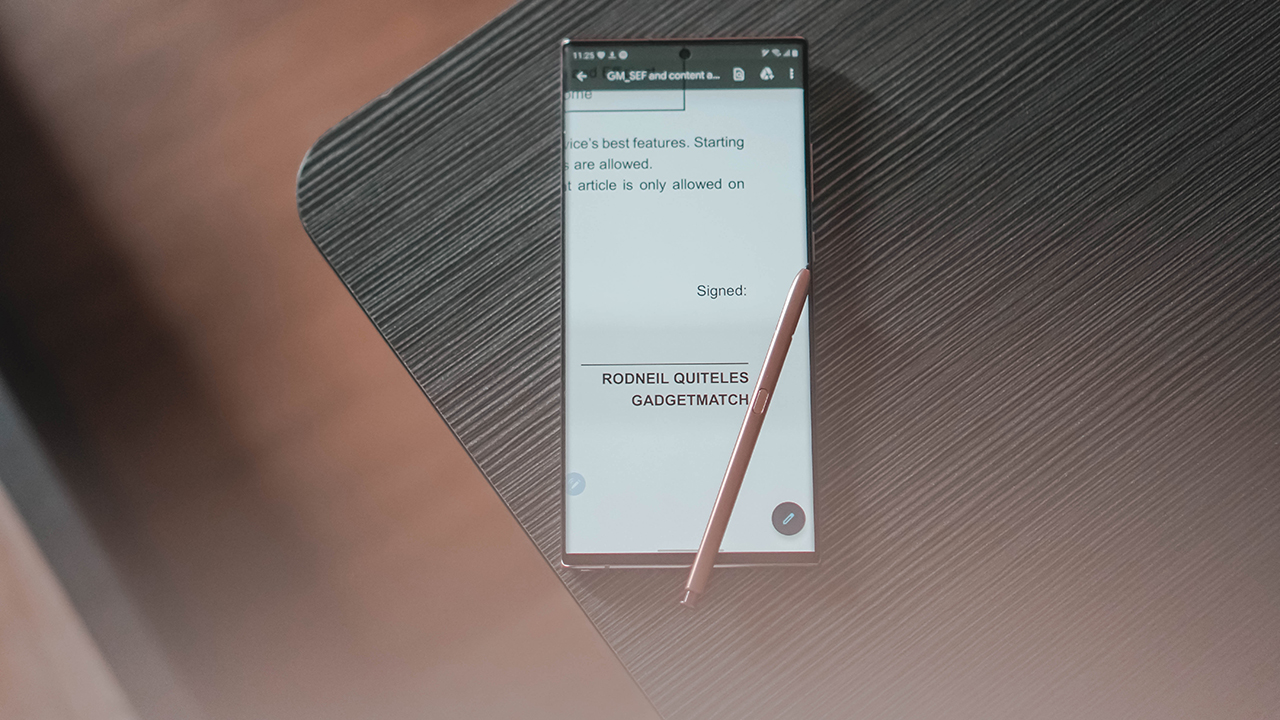 Sure, it’s useful for signing documents here or there. But it’s not something I do very often. And I’ve also already established a workflow on this particular task that doesn’t require the assistance of a stylus.

I tried sketching with it too. But my days of sketching to help my mind glide are far behind me. Plus, I had also recently experienced sketching on a larger screen and that just feels more natural and intuitive than doing so on what feels like a tiny canvass. 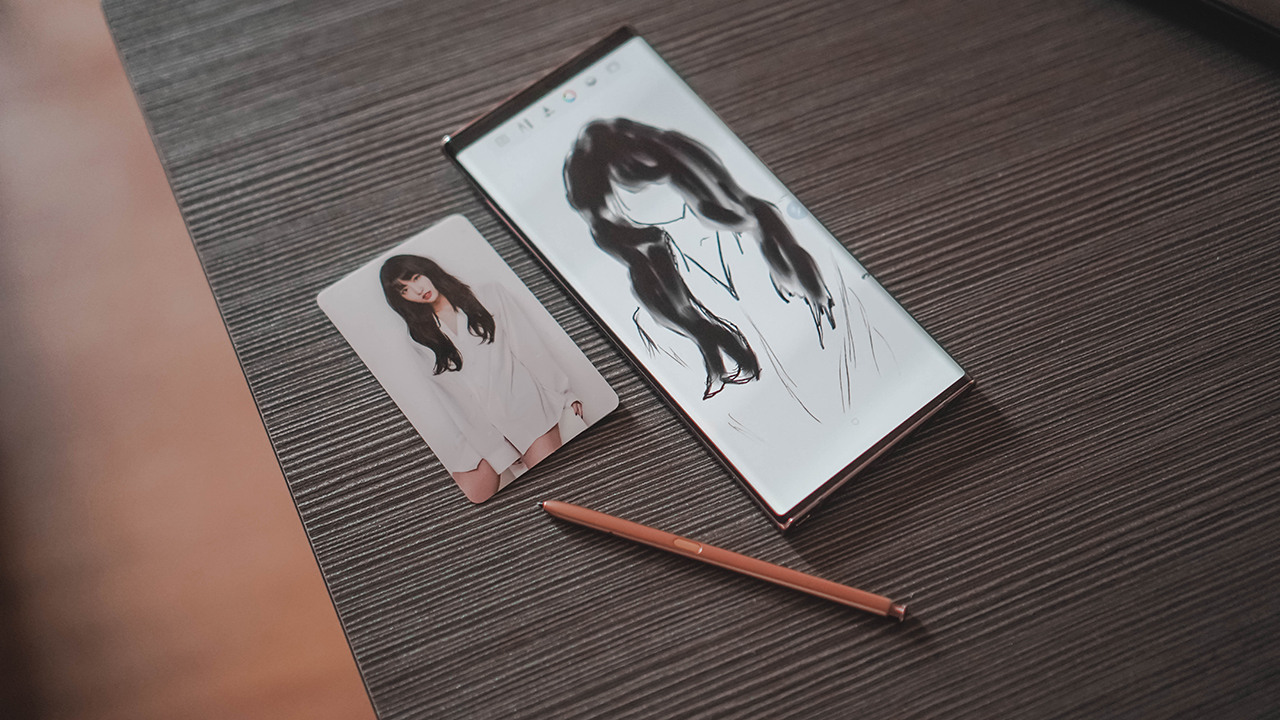 I suck at sketching now. Not that I was any good to begin with

Lastly, there’s the camera. Despite not rating as the absolute best, we all pretty much already know what to expect from Samsung flagship cameras. They capture detail well and ups the saturation just a little bit for that distinct Samsung look. 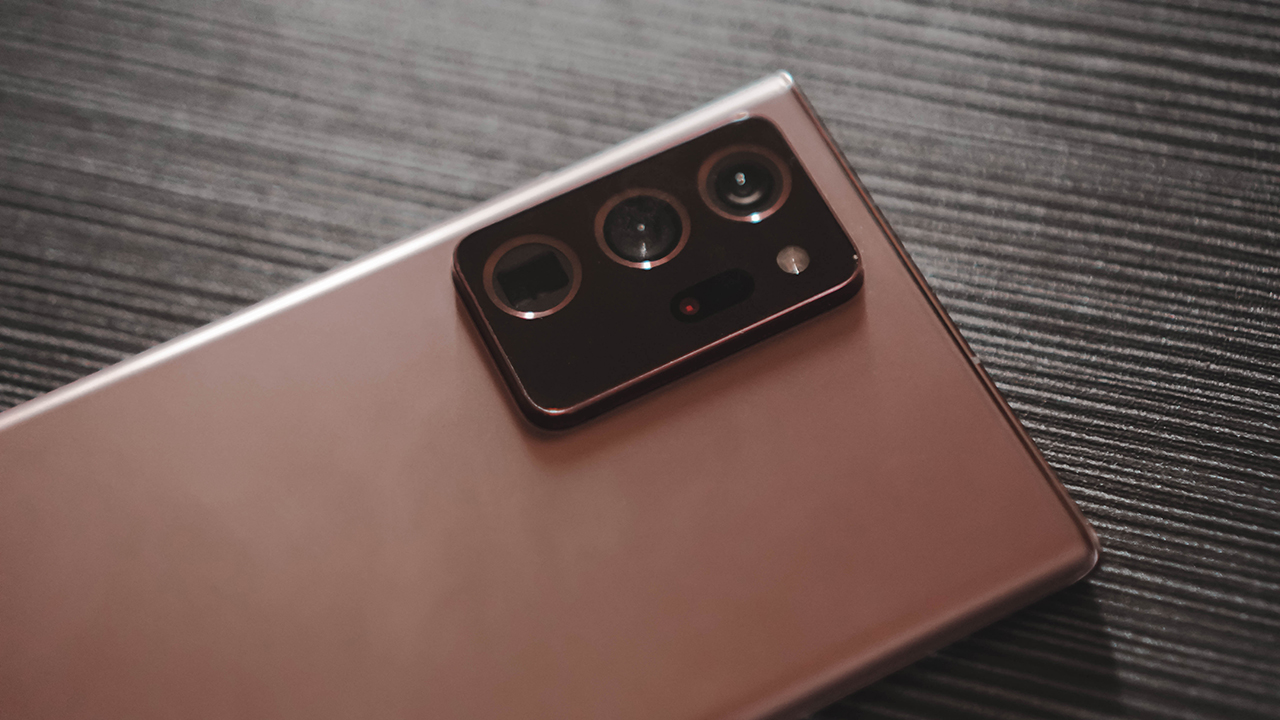 However, being stuck at home and having a pile of work left me with little to no time to really explore the Galaxy Note 20 Ultra’s cameras. I do take photos regularly. But these are product shots that I still prefer to use my mirrorless camera on versus a smartphone camera.

It wasn’t all work

Naturally, I didn’t just use the phone for work. Every now and then I’d play a match or two of Call of Duty: Mobile. Naturally, the phone had no trouble running it on max settings.

My one takeaway is the uneven feeling when you’re holding the phone while you’re playing. The camera bump on this thing is massive, and it’s almost impossible not to grace the lenses when you’re in the heat of the moment. 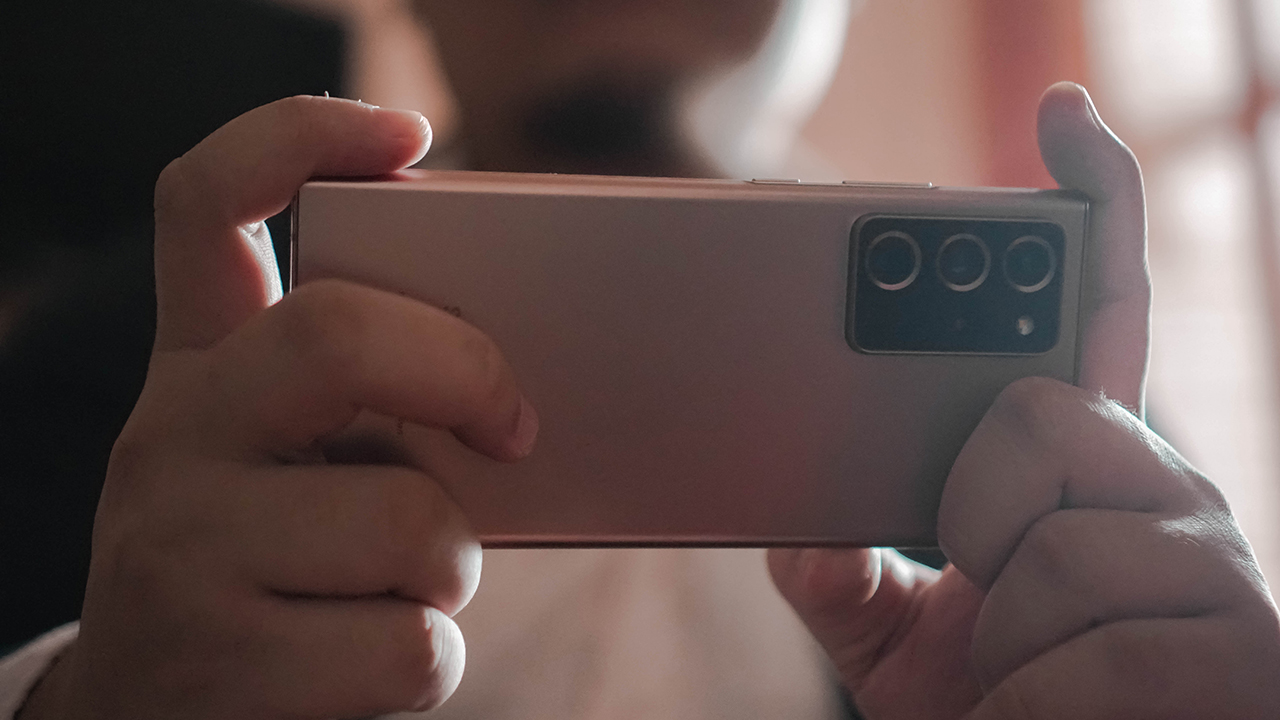 Speaking of heat, I did experience some heating on this phone, although nothing that’s significant. But it didn’t happen while playing. The most strain happened while I was screen recording a live stream. It’s hard to imagine that to be something that most managers would do.

I also watched the K-Drama Memories of the Alhambra on this thing. I intentionally did so because of the gorgeous display. Plus pairing it with HiFi speakers was just an overall better experience versus the (relatively old) TV I currently own. 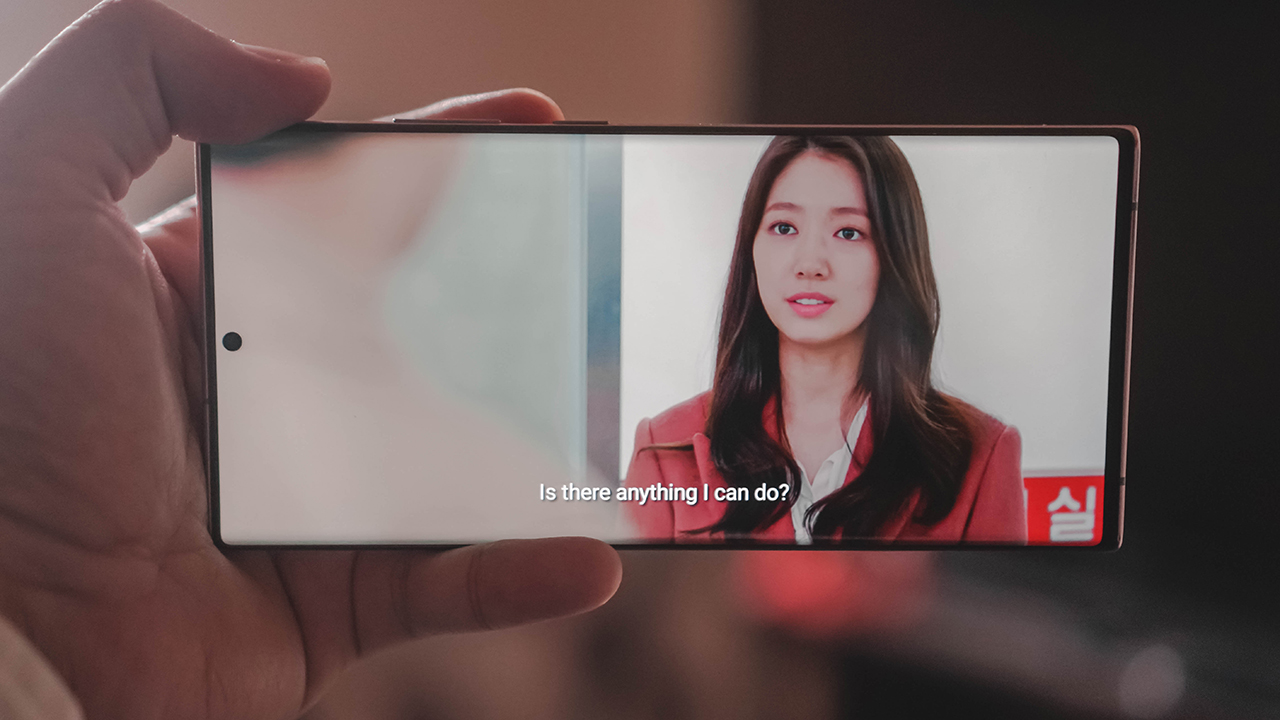 Watched this because of Park Shin-Hye

Is the Galaxy Note 20 Ultra fit for a Manager? 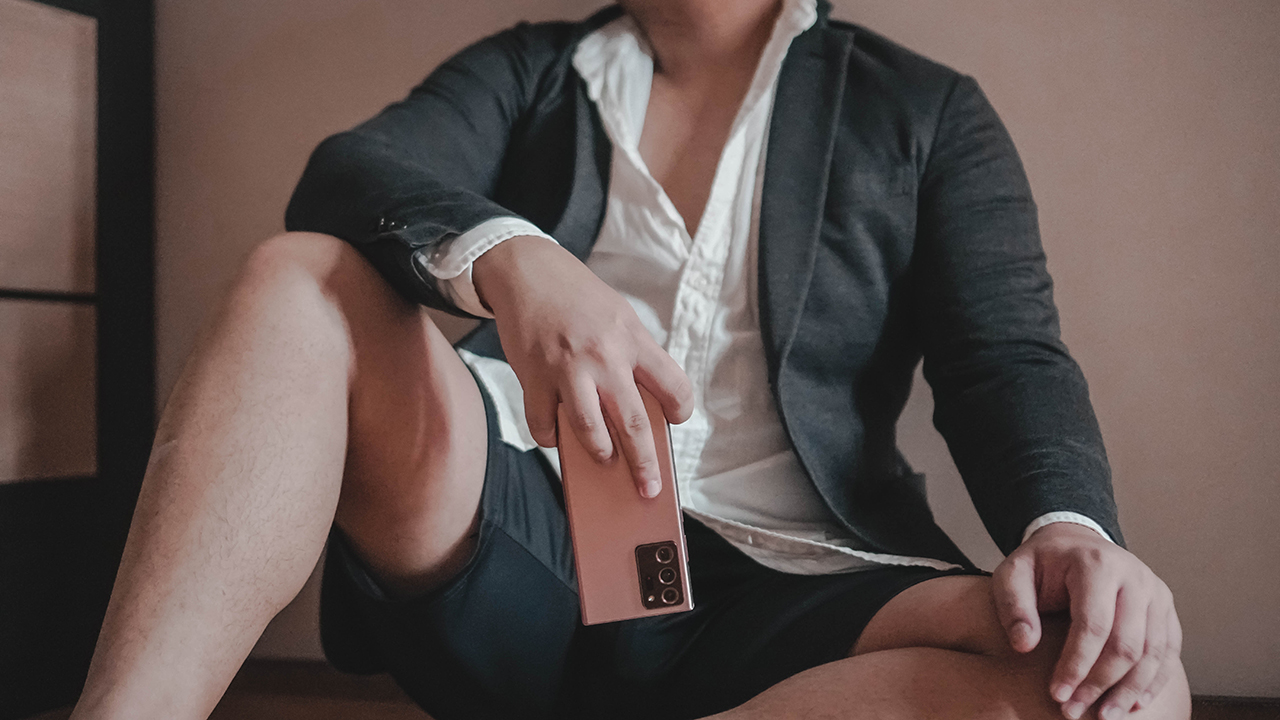 Our Associate Creative Director insisted that this photo be included

I’ve had a personal infatuation with the Galaxy Note line. But as my need (and want) for the S Pen has waned, so has my desire for a Galaxy Note. One of its biggest appeals to me — a large display — is now also present on most phones today.

Personally, it’s no longer the perfect fit for me in terms of need. But for any other manager, it’s easy to say that the Galaxy Note 20 Ultra has everything you need. And then some. If you have the means to splurge, this phone will go a long way in helping you with your tasks and making you look good.