One of the most important decisions faced by every budding Pokemon trainer is the matter of starter Pokémon. You can only choose one – a sidekick that will ultimately effect your game style.

The choice is always between a fire, water or grass Pokémon – each with its own strengths and weaknesses. In the latest Pokemon installment, dubbed Sun and Moon, you have these 3 to pick from.

Rowlet a grass/fighting Grass Quill Pokemon with the ability to sneak up on opponents with silent flying attacks and powerful kicks. 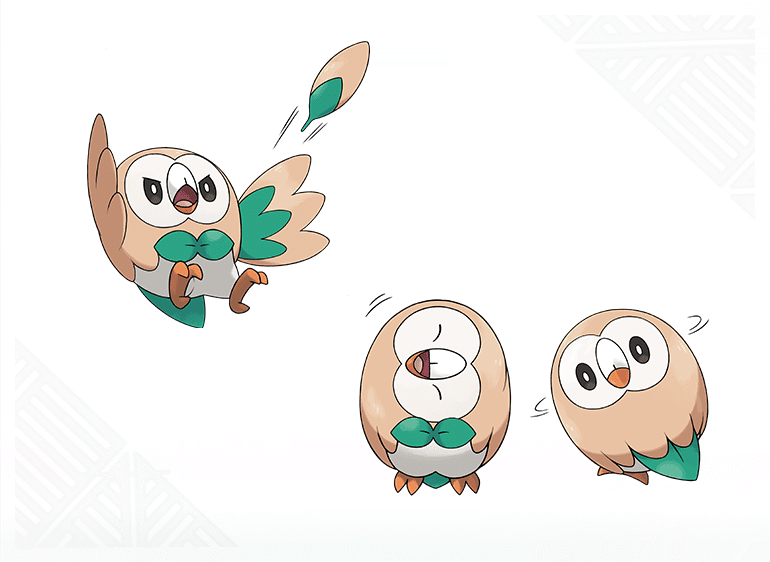 Litten a Fire Cat Pokemon attacks opponents with flaming hairballs made from its highly flammable hair. 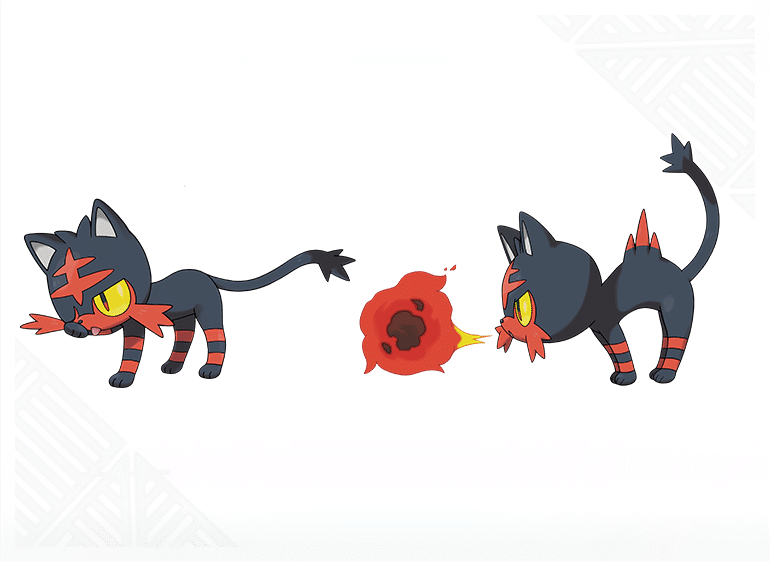 Popplio a water-type Sea Lion Pokemon is an excellent swimmer but while on land uses balloons for acrobatic style attacks. 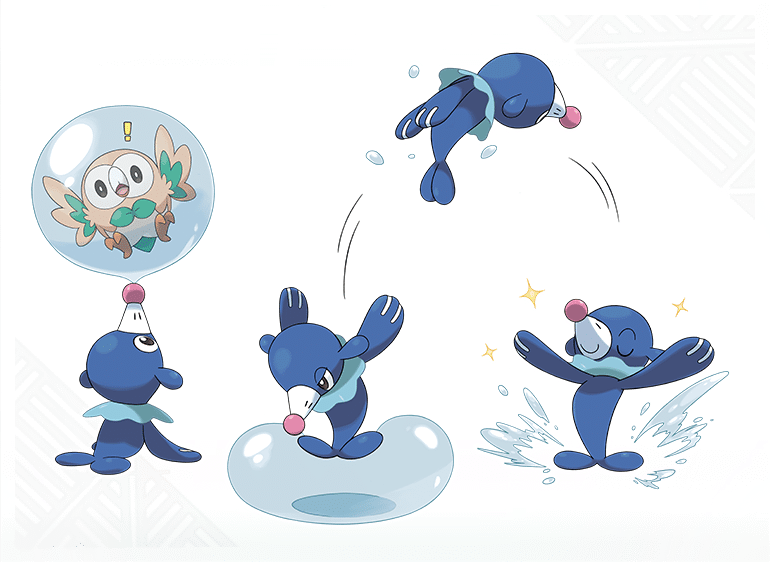 The 3 characters were unveiled alongside yet to be named legendary characters (what appears to be a Super Saiyan lion and a crescent shaped bat) via the game’s first trailer video, released by the Pokemon Company today. The game is set in the Hawaii-inspired Alola region. 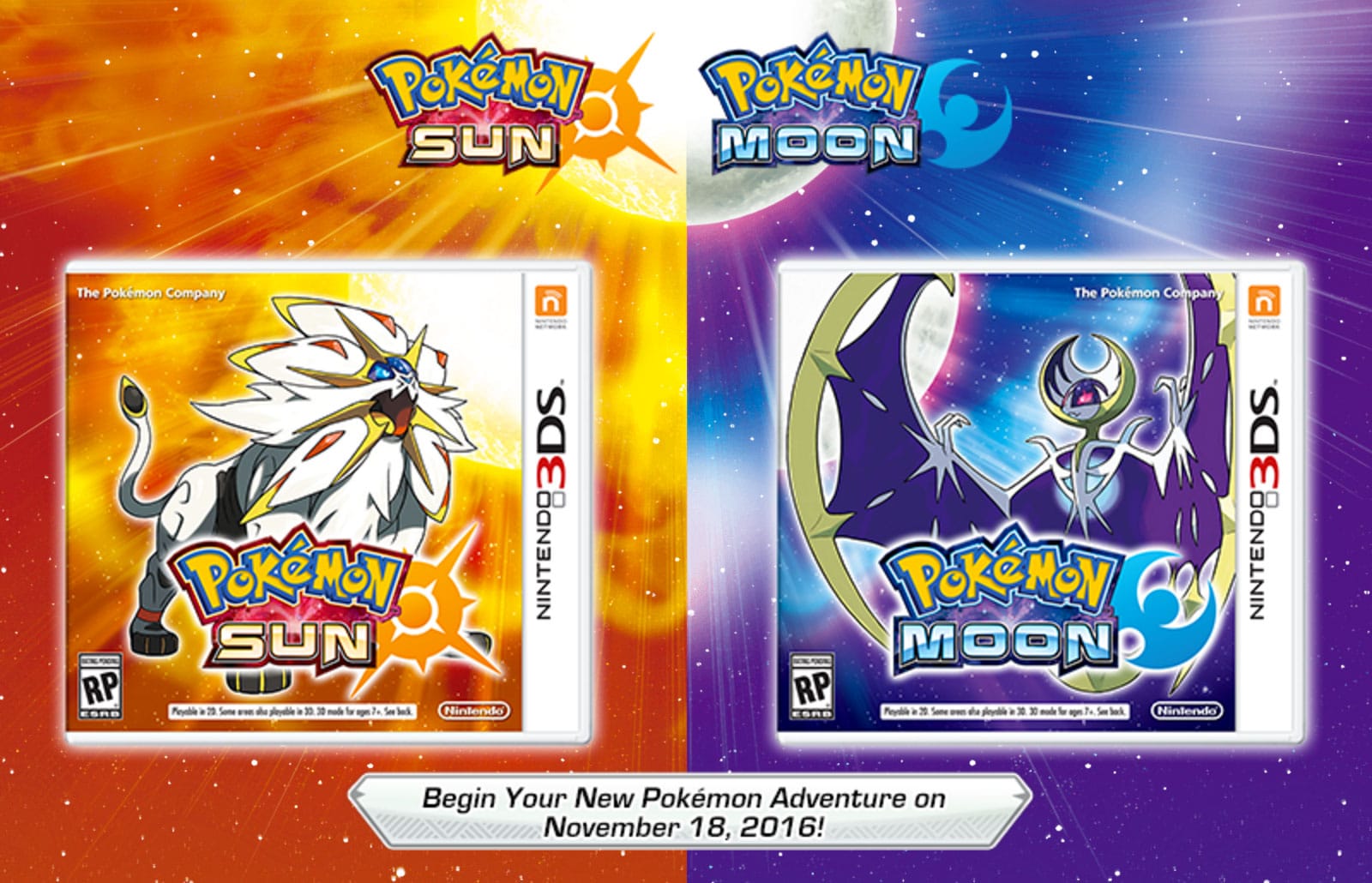 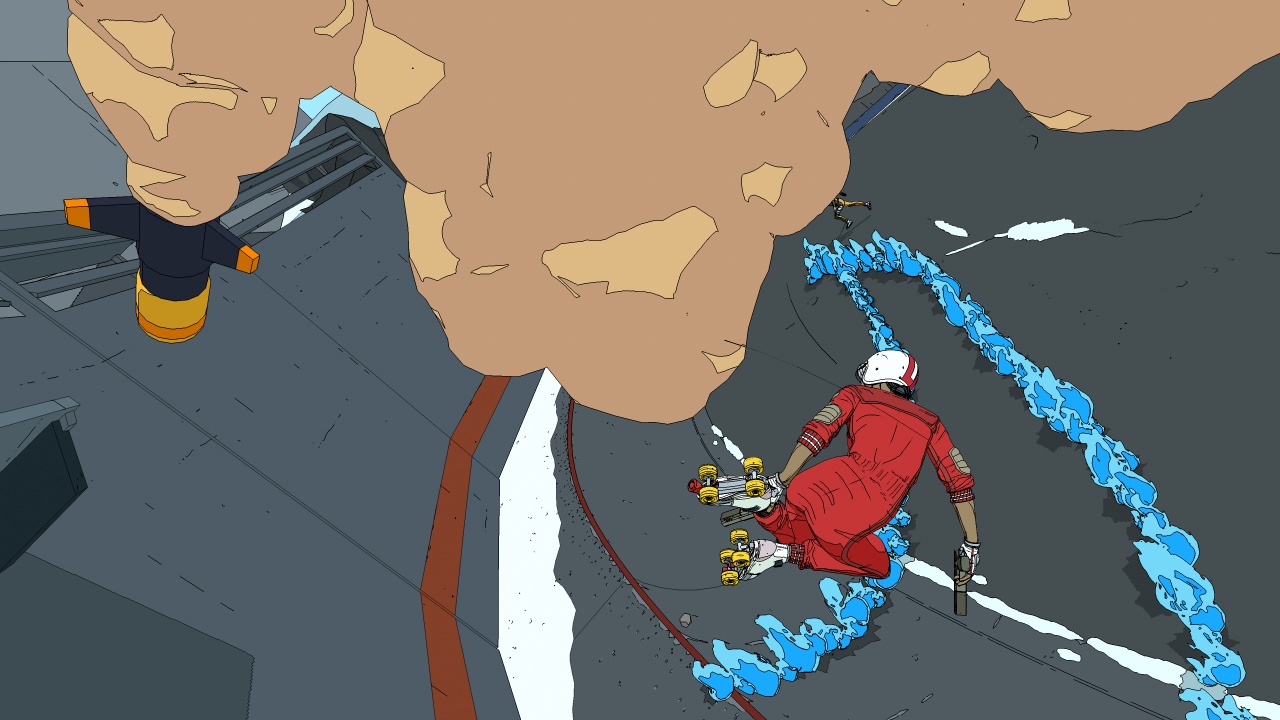 The best way I can describe Rollerdrome to anyone curious about trying it is that it’s a cross between Tony Hawk Pro Skater and the shooting of Max Payne. You get shades of those two games in a unique art style along with a gameplay that demands hours to be mastered.

The game has a pretty simple premise. You play as Kara Hassan making her way through the tough, violent sport called Rollerdrome. 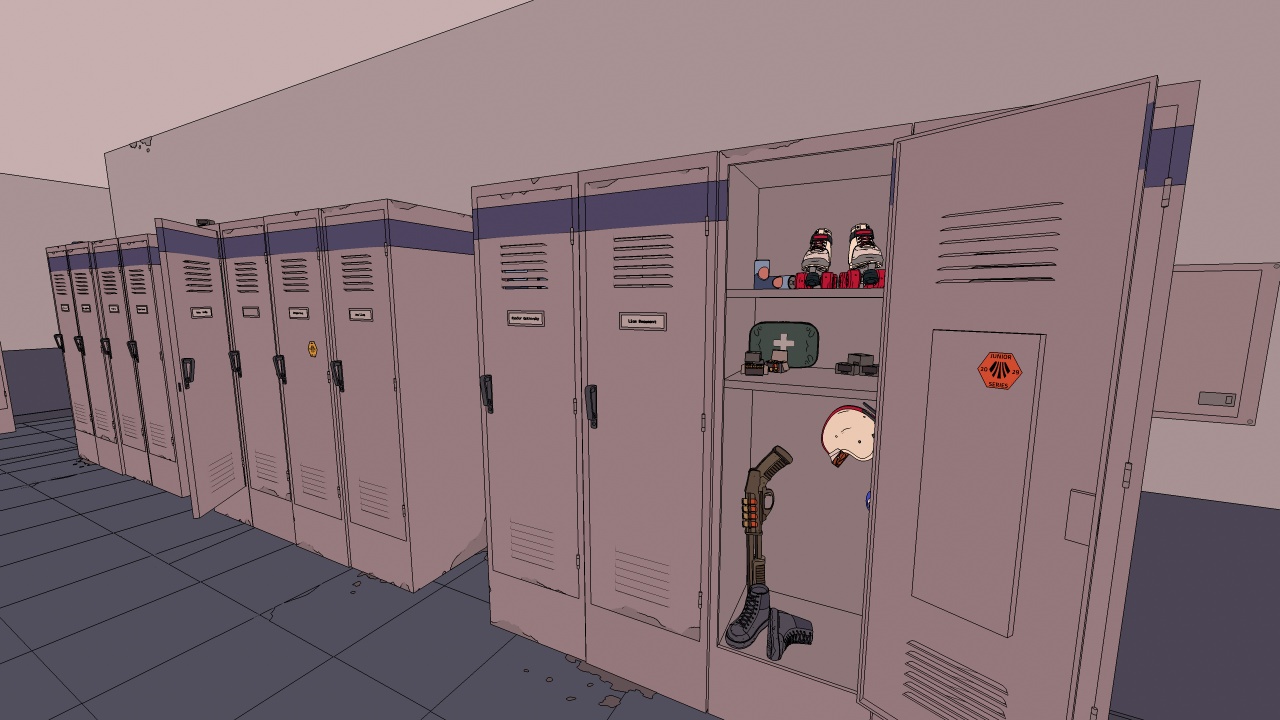 The opening area tells you a little bit about the world Kara is in. But after that, it’s pretty much one challenge after the other. 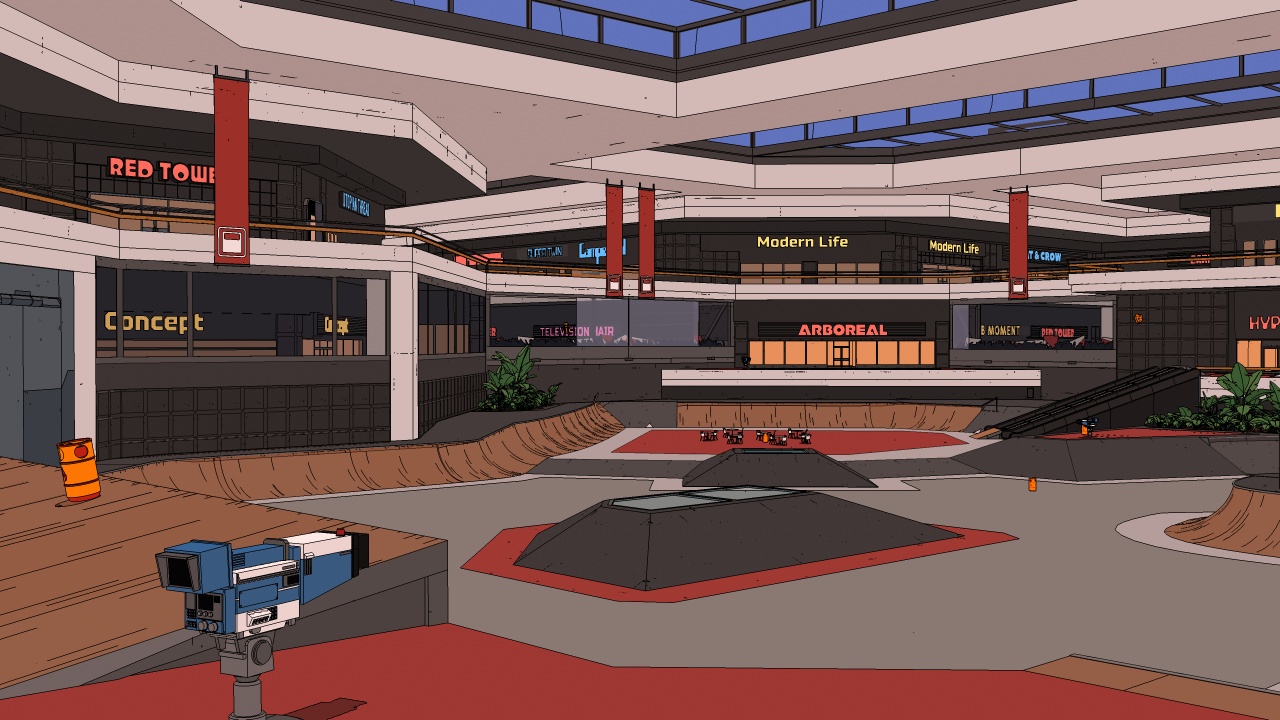 Like any other game, you’ll be put through some relatively easy tutorials. You’ll first be taught the easy movements and then progress to more advanced ones as you beat each level.

It’s a good idea to spend some time trying out the various trick combinations during the tutorial stages. Things can get quite hectic during the actual levels so, the more you’re familiar with the controls, the better chance you’ll have at getting high scores.

That’s not what I did. I took some of the tutorial stages for granted and had to learn on the fly. Not being too familiar with the controls while advancing through stages is hard as the game will really challenge you. 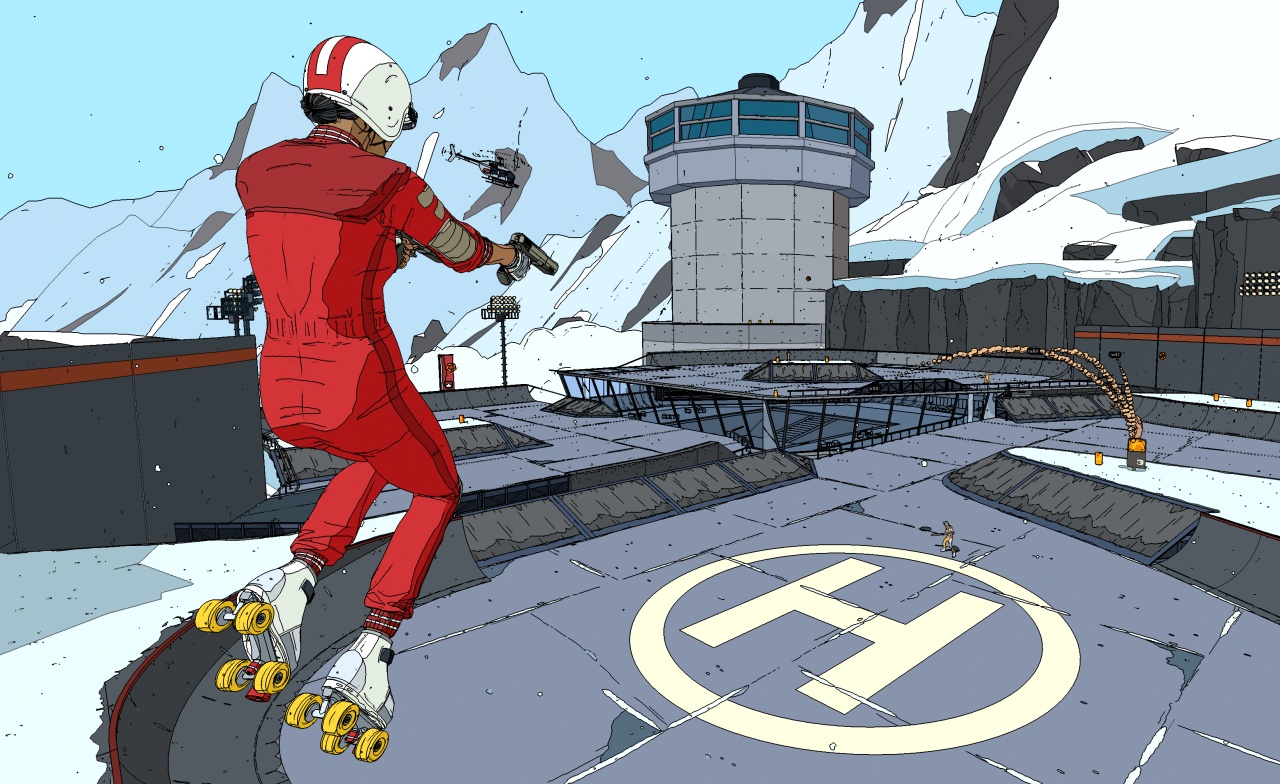 Each stage has a number of different challenges you have to meet. This includes doing specific tricks on a trick marker, killing enemies a certain way, and having to do specific maneuvers on an area in the stage.

There are also high score challenges which are the hardest to beat in each stage. These are the ones that require some level of mastery of the tricks and the shooting.

The tricks and shooting are tied to each other. You only have a limited number of ammo and you’ll need to perform tricks to reload. So, the primary gameplay loop is having to do tricks while dodging enemy attacks, and then unleashing your own attacks all while transitioning to the next trick to reload.

It’s easy enough to understand conceptually, but it’s in the execution where it can be extremely challenging. Enemies spawn in waves and they get tougher and more aggressive as you progress. 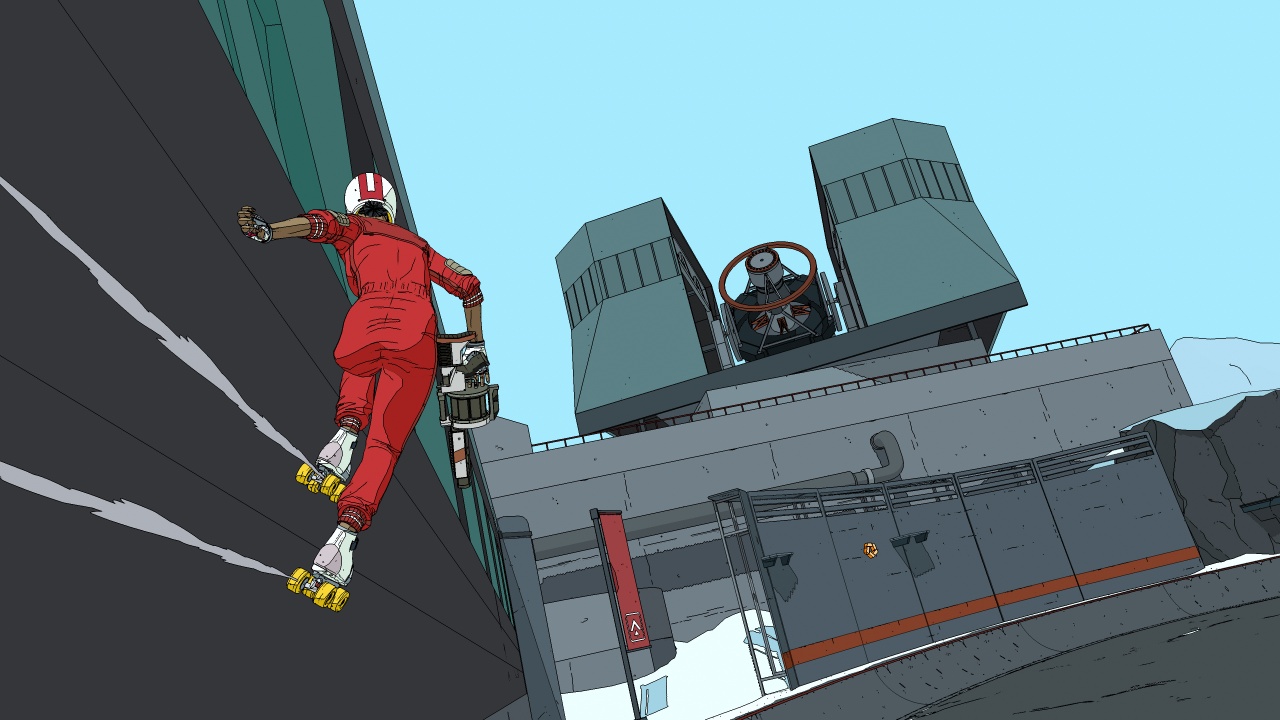 My consistent thought throughout each stage is how I wished I had more time to be familiar with all the controls. I keep thinking back to how I just know NBA 2K controls by heart, having played it for years, despite a few changes here and there in the core gameplay.

It was frustrating not being able to apply that same level of mastery. Especially since I had to go on a work trip in the middle of this review process so I couldn’t spend as much time with the game as I wanted.

Regardless, it’s a game I’ll probably keep coming back to. More skilled players will likely have an easier time, but Rollerdrome does demand you put in the hours.

The controls are pretty tight and precise too. You won’t get through this by randomly pressing buttons. Your mastery of doing tricks while controlling the camera to properly aim will all be tested. 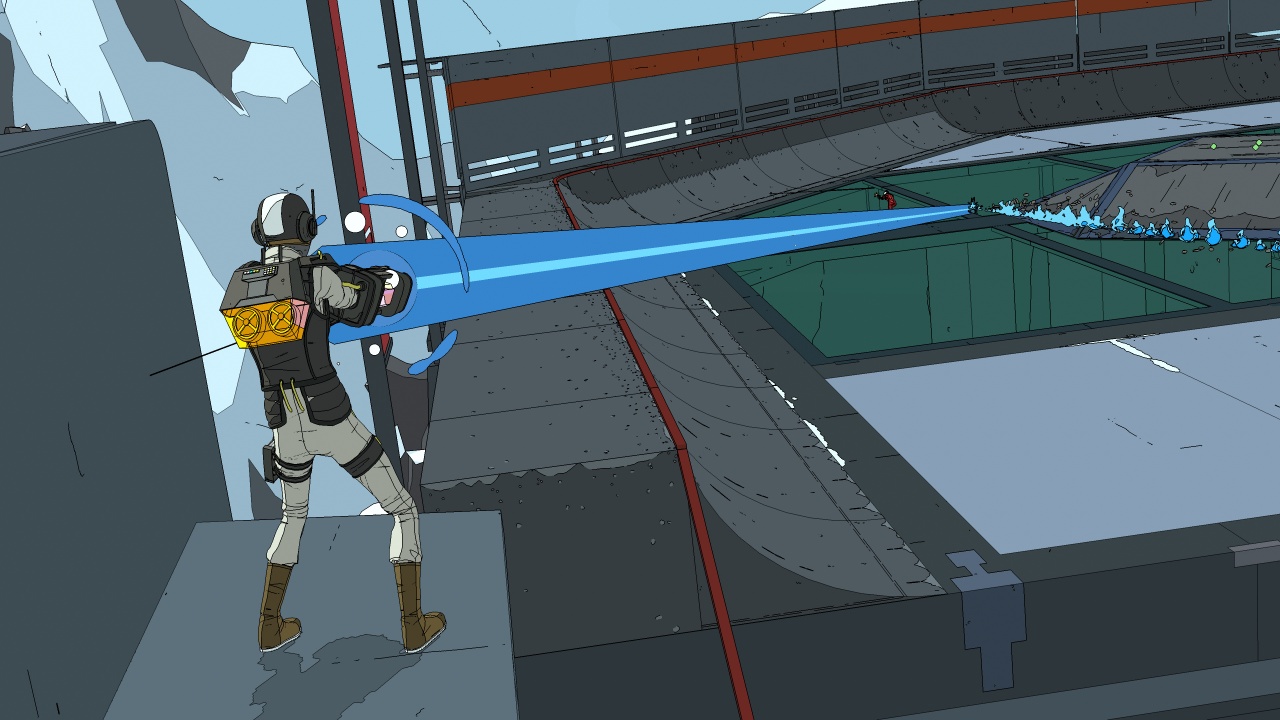 Other than the gameplay, it’s the art style and its bombastic and frenetic animations that really caught my attention when the game was first announced. It simply looked fresh and unique.

There are instances where there is a lot going on during a stage. Other than the characters and items on screen, you also have markers alerting you if a sniper has you on lock or if you have projectiles tailing you.

Despite this, the screen never gets too busy to a point where you no longer know what’s going on. The design of each stage makes it so you can easily tell which areas you can perform tricks on without it standing out too much from the rest of the stage.

The soundtrack largely stays in the background but does a good job of not being distracting. Which is great because having something blasting too loudly could give you sensory overload with everything that’s going on.

Overall, this game is stylish AF without going overboard. I’m personally a big fan of the art style and it works well in this kind of game. 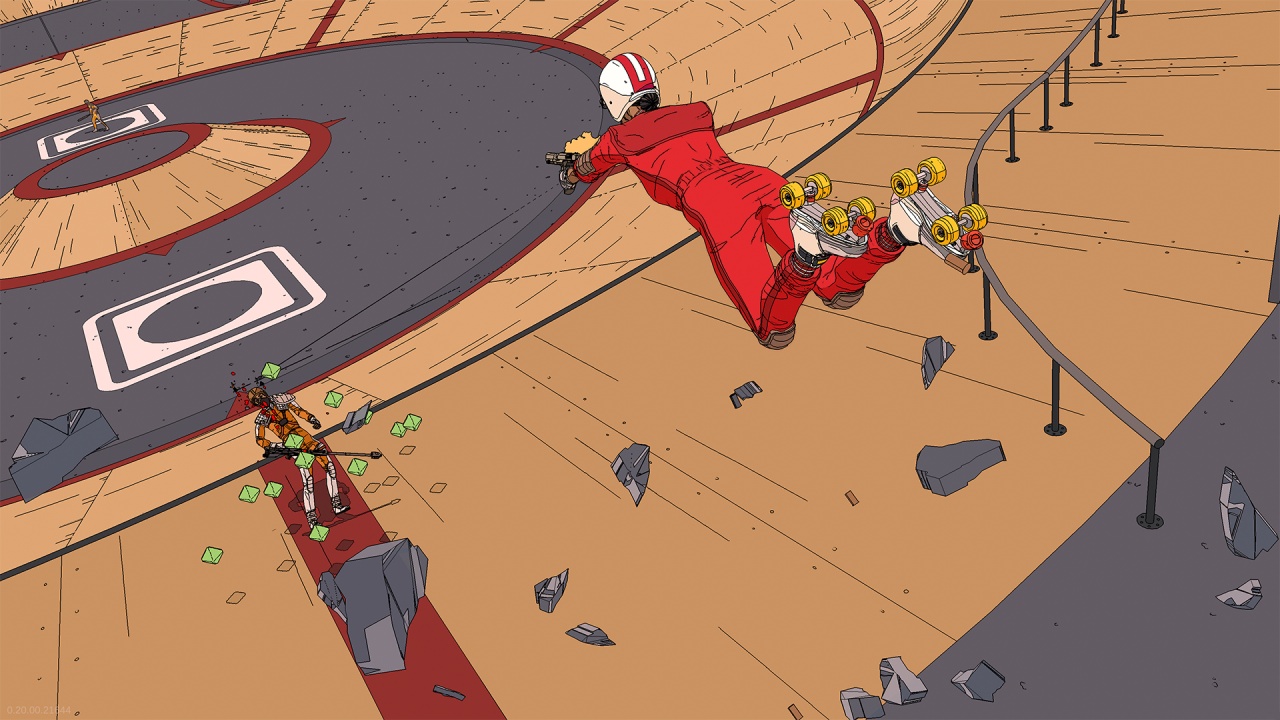 Rollerdrome is a day one pick-up. If the preview videos intrigued you at all, I guarantee you’ll have a grand time playing. This is especially true if you’re fond of challenging yourself.

Figuring out how to smoothly go from attacking, to doing tricks to reload, and dodge in the process can be really challenging. Unless you’re super skilled, there’s no way you’ll get all of it in one go.

But despite needing to repeat stages, it never feels stale because the core gameplay loop is engaging. It can get frustrating, sure, but the feeling of beating each stage all while crossing off specific challenges is extremely rewarding. 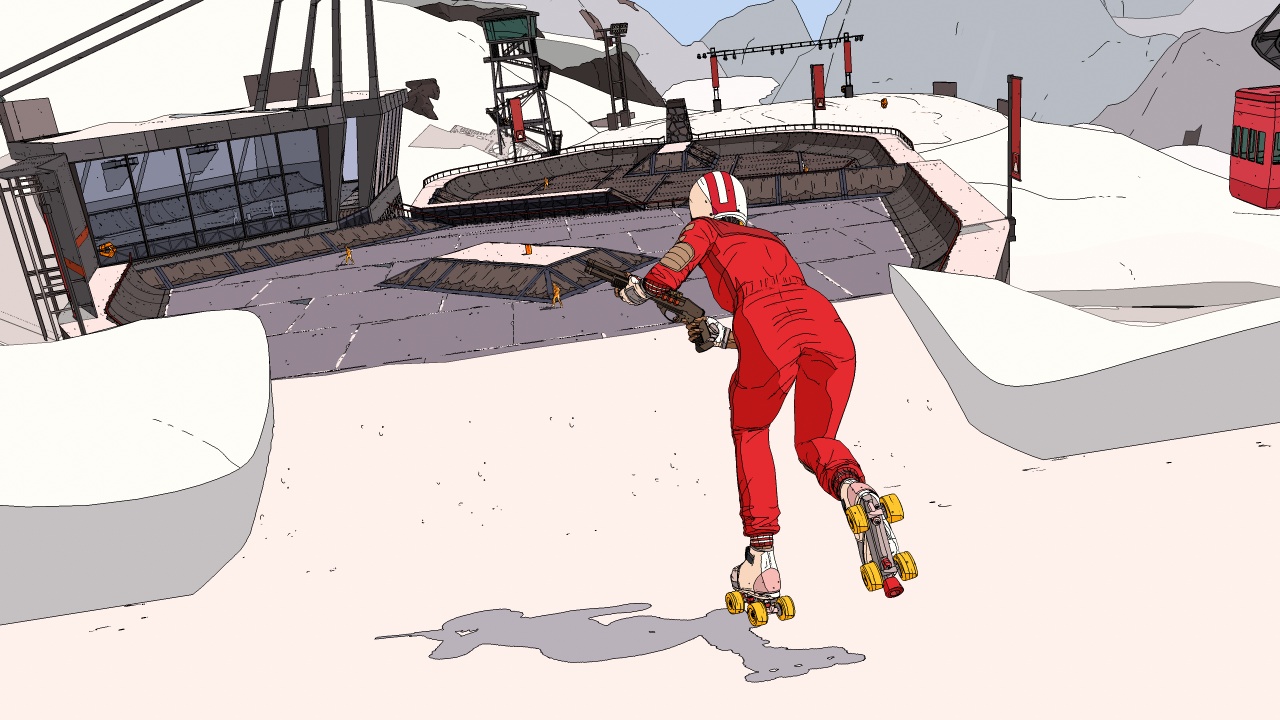 Rollerdrome retails for US$ 29.99 both on Steam and the PlayStation store. But it will be discounted on both platforms until August 29, 2022. 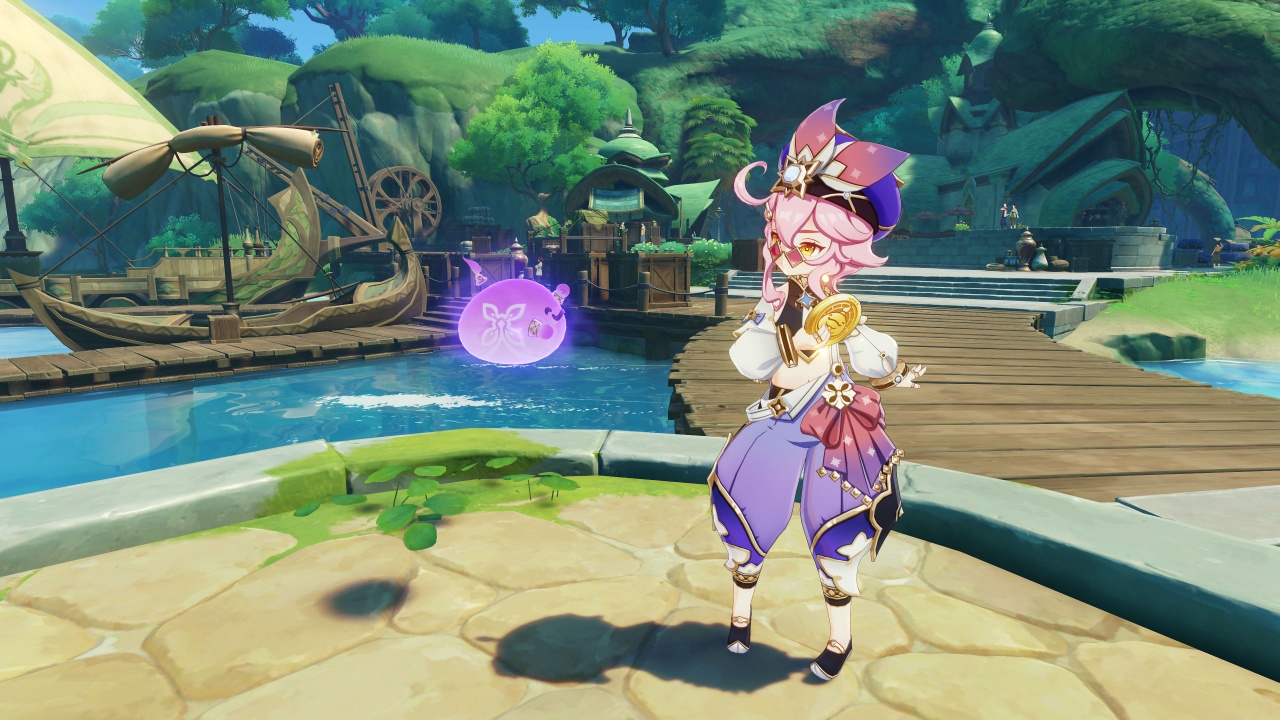 Version 3.0 of miHoYo’s hit action-RPG Genshin Impact will launch on August 24, featuring the introduction of a fourth nation as well as new quests and characters.

The latest version will introduce the fourth nation of Teyvat – Sumeru which expands the game’s map massively.

The Dendro gameplay mechanics will also be revealed for the first time, including brand-new elemental reactions.

Lastly, the Rich Archon Quests and World Quests will also be made available.

To hype up the much-anticipated release, a trailer has also been unveiled here.

Lighter, faster than its previous version 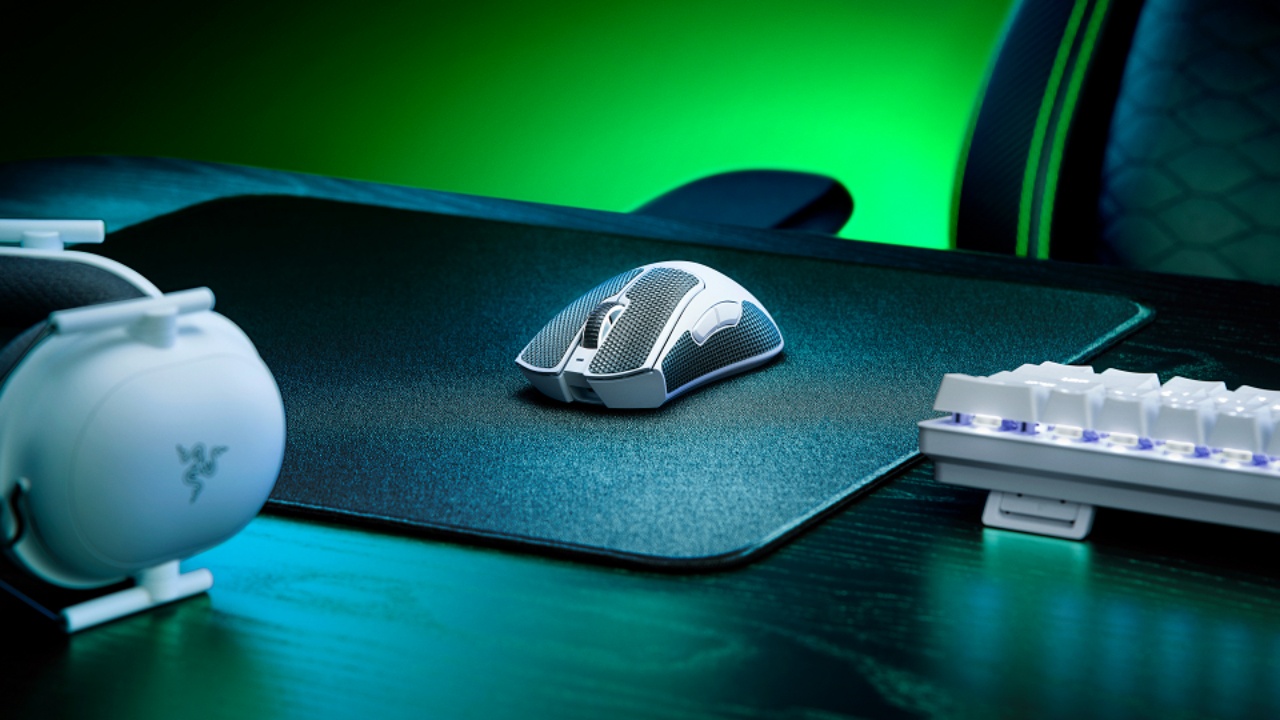 Razer has announced the release of the new DeathAdder V3 Pro, the latest version yet of its best-selling mouse line that aims to provide the smoothest gaming experience for users.

Th DeathAdder V3 Pro features Razer’s new HyperPolling technology that allows a polling rate of 1000Hz at 1ms polling intervals, which can be improved to 0.25ms when used with a HyperPolling Wireless Dongle.

Aside from the technical improvements, the mouse also sports a new shape. It features reduced flares on the sides for better grip and hand support. The scroll wheel, buttons, and palm support have all been elevated as well.

The mouse also has lower wireless click latency than its previous version, and is 25 percent lighter. When it comes to battery life, the DeathAdder V3 Pro can support up to 90 hours. It also comes with a Razer Speedflex charging cable (USB Type C).

The latest DeathAdder is available in black and white colorways for PhP 9,590 in Lazada, Shopee, and Razer’s authorized resellers.