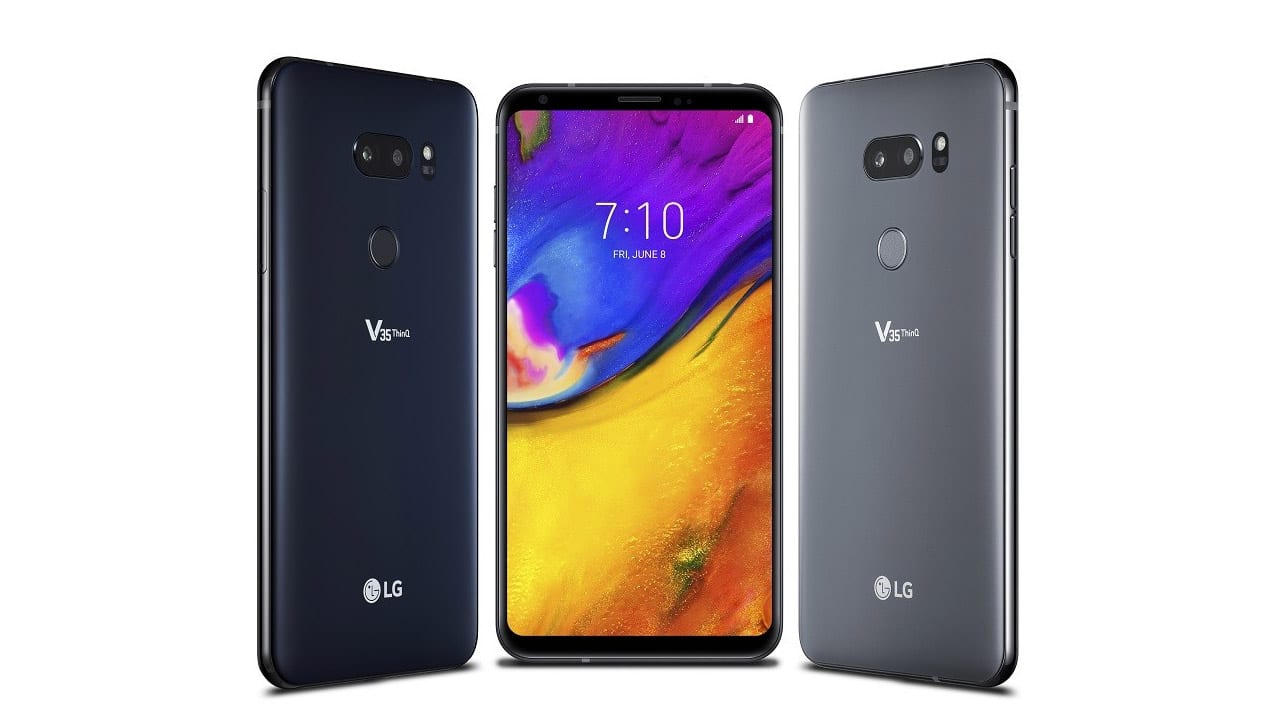 LG is really taking ThinQ seriously. After updating the V30 with this AI tech and implementing it on the recently launched G7, LG is delivering yet another ThinQ upgrade to the V-series. This time, it’s called the V35 ThinQ.

If you’re already familiar with LG’s recent releases, the V35 ThinQ is pretty much a V30S ThinQ with the internals of the G7 ThinQ. That means we have the best of both: the gorgeous 6-inch P-OLED panel and hearty 6GB memory of the former, with the high-end Snapdragon 845 chipset and camera system of the latter.

This is what the G7 ThinQ could’ve been, but LG already stated that there are distinct differences between the two lineups in spite of the merging features. So although the V35 ThinQ has what most people consider a superior OLED display (with HDR support) plus a larger battery (3300mAh versus 3000mAh), the G7 ThinQ has its powerful BoomBox loudspeaker and dedicated Google Assistant button to its credit. 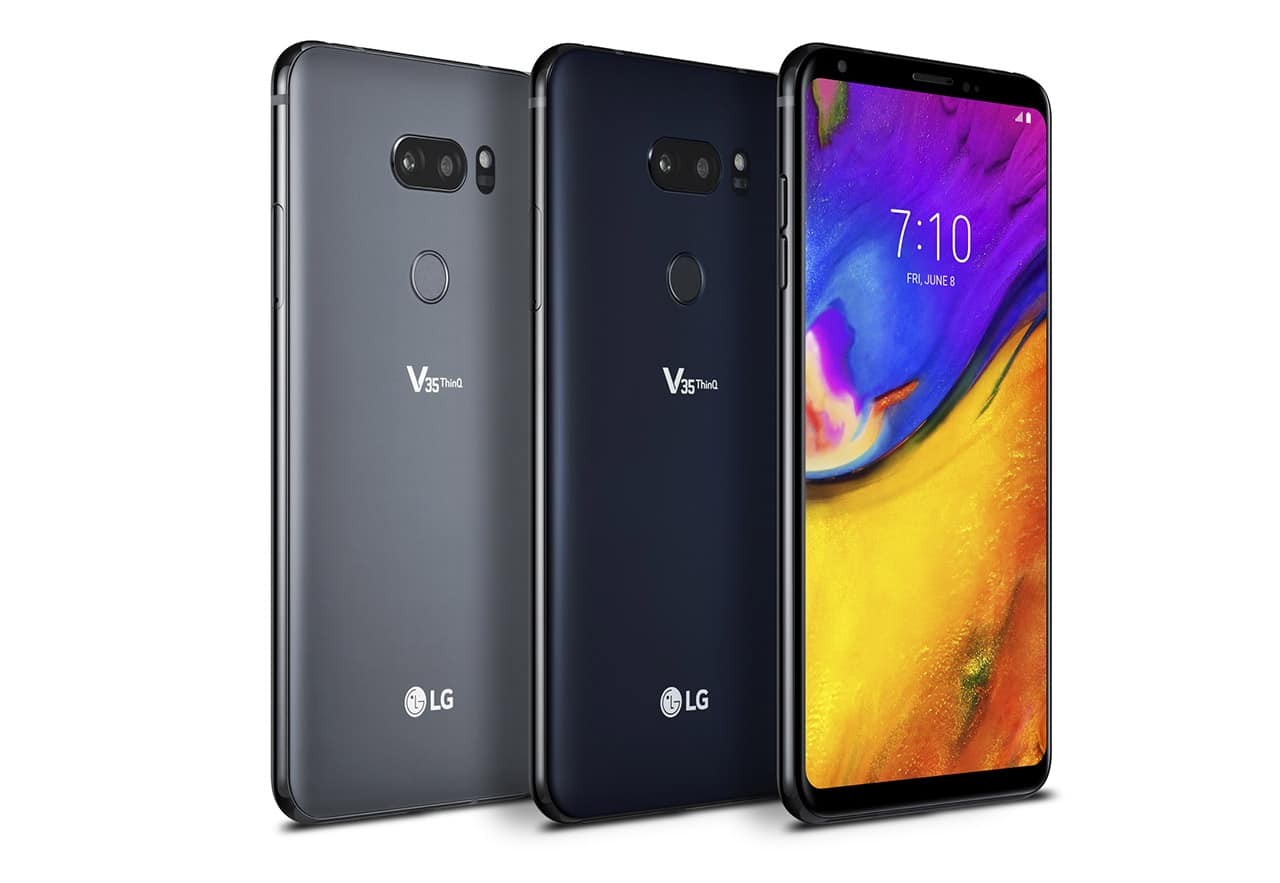 The rest of the specifications are what you’d expect from an LG flagship in 2018: MIL-STD 810G compliant and IP68-rated body, Quad DAC audio with a 3.5mm port, up to 128GB of expandable storage, Android 8.0 Oreo with LG’s own user interface, and to our surprise, no notch.

AT&T will be selling the V35 ThinQ for a jaw-dropping U$ 900 in the US. Pre-ordering begins on June 1, with the actual rollout starting on June 8. 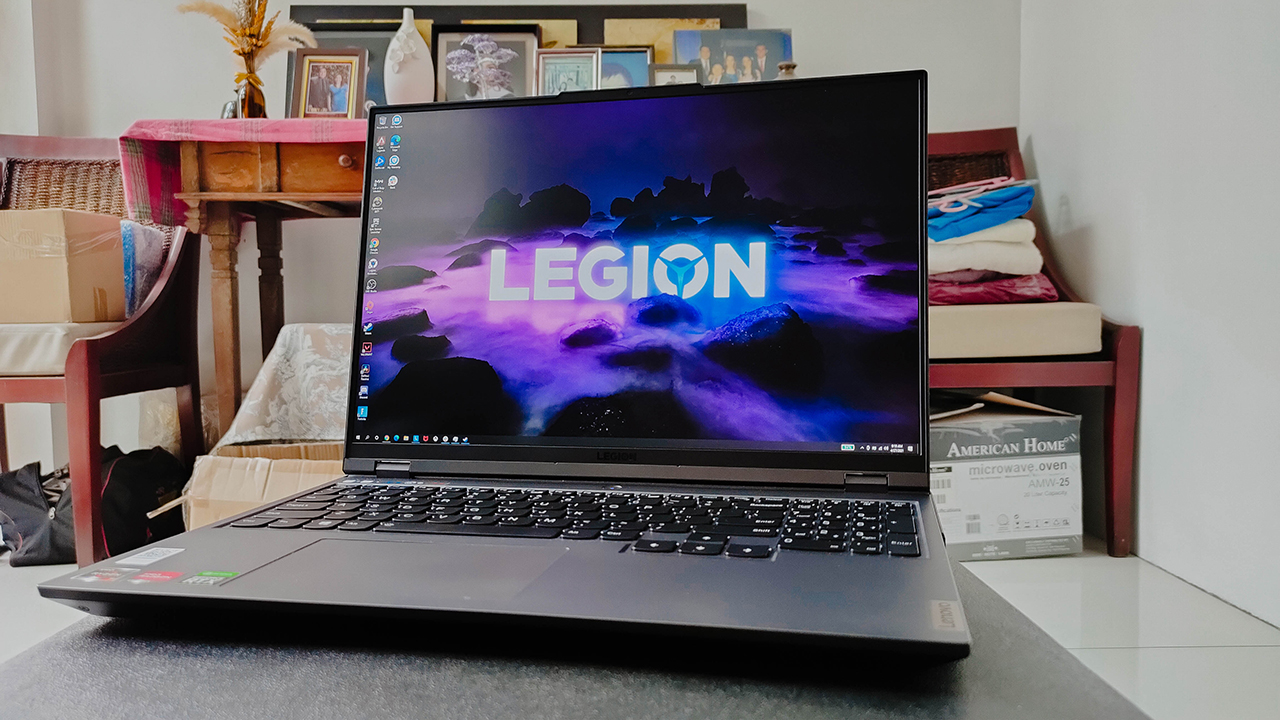 Lenovo Legion has a lineup of three new gaming machines that definitely deserve your attention. These are the Legion 5, Legion 5 Pro, and Legion 7.

The new arsenal embraces innovation by providing better resolution displays, AI-bolstered thermal cooling, and framerate customization, and the power to completely immerse gamers or face difficult tasks at ease with the AMD Ryzen 5000 H-series Mobile Processors and NVIDIA GeForce RTX 3000 Series GPUs. Users can work hard during the day and play harder at night with the savage performances

The new Legion 5, Legion 5 Pro, and Legion 7 are among the first notebooks equipped with the AMD Ryzen 5000 H series Mobile Processors. These are the only processors in the world to have 8 high-performance cores suited for ultrathin gaming notebooks. Powered by AMD’s new Zen 3 Core Architecture and the world’s most advanced x86 chip technology, the processors combine incredible efficiency, elite performance, and long-lasting battery life that will keep gamers playing more for years to come.

Accompanying the AMD Ryzen 5000 H-series Mobile Processors are the NVIDIA GeForce RTX 3000 Series GPUs developed to bring the ultimate gaming performance. These graphics cards are jam-packed with new internals such as the award-winning NVIDIA Ampere architecture, 3rd Generation Ray Tracing Cores, 2nd Generation Tensor Cores, and streaming multiprocessors to give gamers and content creators the most realistic graphics ever along with cutting-edge AI to fine-tune art to the smallest detail. They also feature NVIDIA DLSS 2.0 Technology that also uses AI to accelerate the laptop’s performance when playing games. Booting up Cyberpunk 2077 with DLSS Technology, for example, boosts performance by up to 60 percent. 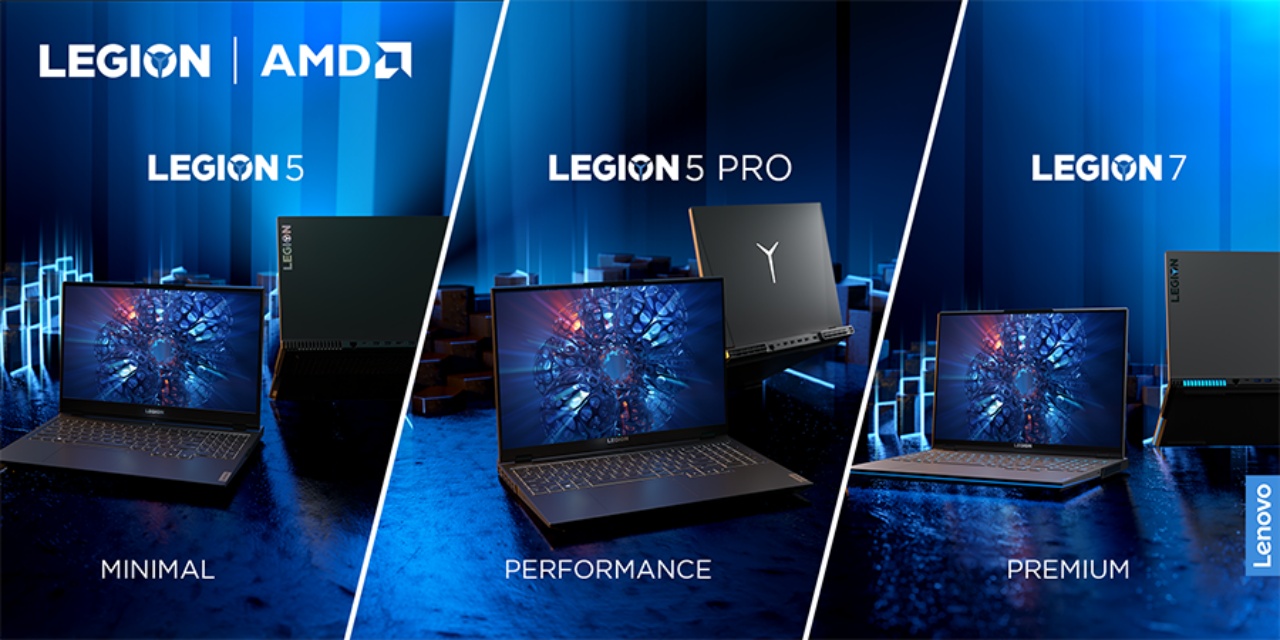 The Legion 5, Legion 5 Pro, and Legion 7 come with the Lenovo Legion AI Engine that currently supports the top-16 AAA games and enables them to be played as smoothly as ever. The engine combines the best-in-class hardware, software, and machine learning to overclock PC performance. Upon booting up a game, the Legion AI Engine automatically detects and routs the most-ideal Thermal Design Power (TDP) settings to the CPU and GPU to achieve the maximum frames per second (FPS) in games. It also uses machine learning in other games to continuously tune gaming performance for maximum results.

The new Legion lineup also utilizes AI in the Coldfront 3.0 thermal management system to keep the temperature inside cooler as gaming action heats up. Coldfront 3.0 packs an intelligent intake system that allows for an increased airflow of up to 18 percent as compared to the last generation by using turbo-charged dual-fans and quad-channel exhausts with vapor chamber technology. Together with the help of efficient thermal conduction materials, Coldfront 3.0 moves huge volumes of air through components to dissipate heat rapidly and allows for optimized performance and all-day mobility with long-lasting battery life.

Both the Legion 5 Pro and Legion 7 are the first gaming laptops in the world to come out with 16” Quad High Definition (QHD) displays, allowing them to have a taller and clearer (2560 x 1600 resolution) 16:10 aspect ratio. Combined with up to a 165Hz refresh rate, 100 percent sRGB, and 500 nits of brightness, gamers are treated to a cinematic-like experience that also assists in competitive games. The larger display raises a gamer’s sightlines and provides a better field of view, so they’ll detect enemies faster. Moreover, both displays of the Legion 5 Pro and Legion 7 have 3ms response times and can come out VESA DisplayHDR 400 Certified and with Dolby Vision  and NVIDIA G-SYNC support.

The new Legion lineup’s Harman speakers are now optimized with Nahimic Audio. Designed for gamers, Nahimic gives a competitive edge with 360-degree audio and features such as Night Mode with smart volume reduction, and Sound Tracker that visually points out a sound’s source and direction in a game. Nahimic Audio also enables crystal-clear video calls with its background noise suppression feature, and it also comes with Sound Sharing that allows the streaming of audio from a PC to two different headsets without the need for audio adapters.

Lenovo’s upgraded Vantage software is also bringing the speed in the Legion 5, Legion 5 Pro, and Legion 7. They now come with the Vantage Smart Performance Services solution that reduces PC downtime by scanning, detecting, and removing traces of spyware, malware, and adware. Gamers can also use the new solution to significantly reduce lag and latency issues while playing online multiplayer games through its ability to fix network and access issues.

Aiding the Lenovo Vantage in enabling seamless play among the new devices is their 3-Year Premium Care warranty service that’s bundled together with the notebooks upon purchase. The service consists of solutions that provide an advanced and tailored level of care that reduces downtime, increases efficiency, and keeps customers moving. Included among the offerings that users of Premium Care can enjoy are a 24/7 direct hotline to Specialized Senior Technicians, comprehensive hardware and software support, and an Annual PC Health Check. 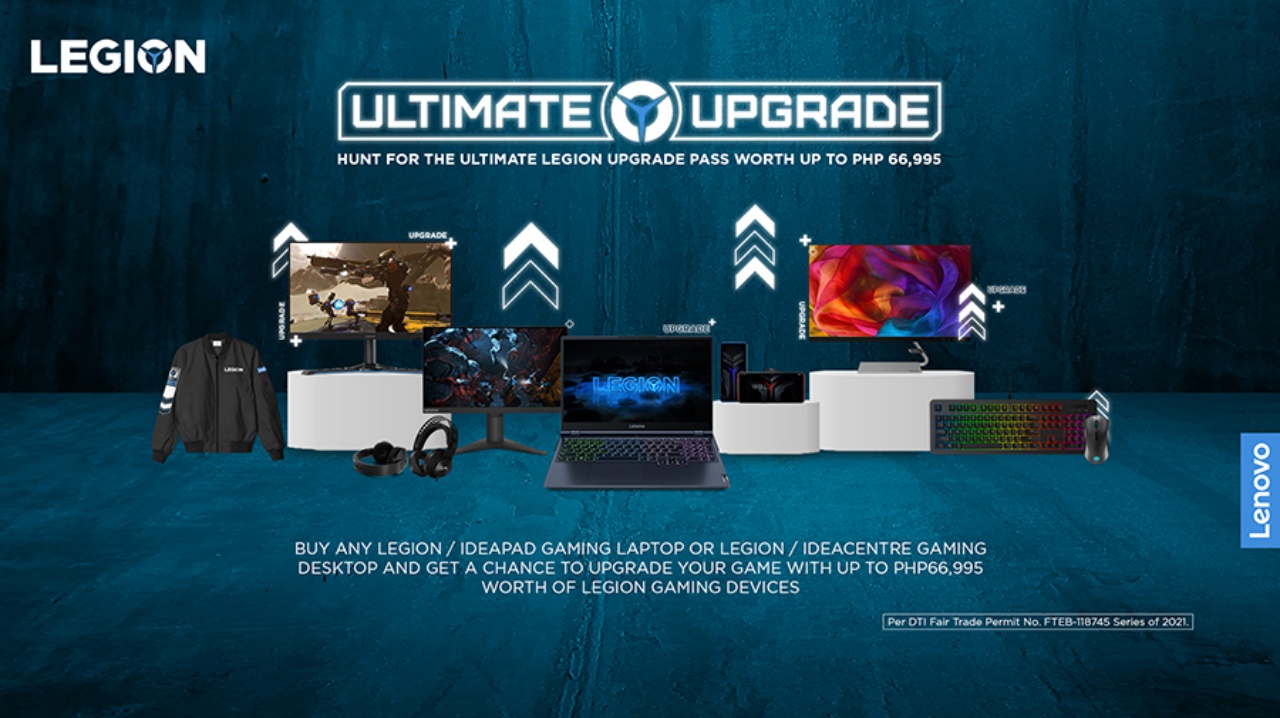 From the week of April 30 and onwards, gamers can get their hands on the Legion 5 Pro that has a starting price of PHP 84,995. The notebook is available in Storm Grey and comes bundled with a free Legion Recon Gaming backpack (PHP 2,995) upon purchase.

The Stingray White and Phantom Blue Legion 5, on the other hand, will be available within the quarter with a starting price of PHP 74,995, while the Legion 7 in Storm Grey is expected to hit local stores in the early first half of 2021 and will start at PHP 139,995. Both notebooks will also be bundled with a free Legion Recon Gaming backpack.

To celebrate the arrival of its new gaming lineup, Lenovo is holding its Legion Ultimate Upgrade Promo. From May 7 to May 31, 2021, customers who purchase participating products are entitled to a Legion Upgrade Pass that can have up to PHP 66,995 worth of gaming freebies.

Every purchase is eligible for one Upgrade Pass and to claim, customers must visit legion.lenovo.com/promotions and provide purchase details.

Customers will then receive a promo code equivalent to their Upgrade Pass, and this will randomly select the Upgrade Pass color that they’ll get. The colors and their corresponding freebies are as follows:

For the full mechanics of the Legion Ultimate Upgrade Promo and the complete list of participating products, visit legionphpromos.com. Customers can also submit their promo codes to Lenovo through the same link.

Lenovo Legion’s new lineup of gaming notebooks are available at official Lenovo Legion stores and Lenovo Authorized Resellers nationwide. Visit lenovo.com/ph/en/where-to-buyto get in touch with the nearest store. The devices are also available online through the Lenovo Legion Flagship Store at Lazada.

This is a press release from Lenovo Legion Philippines 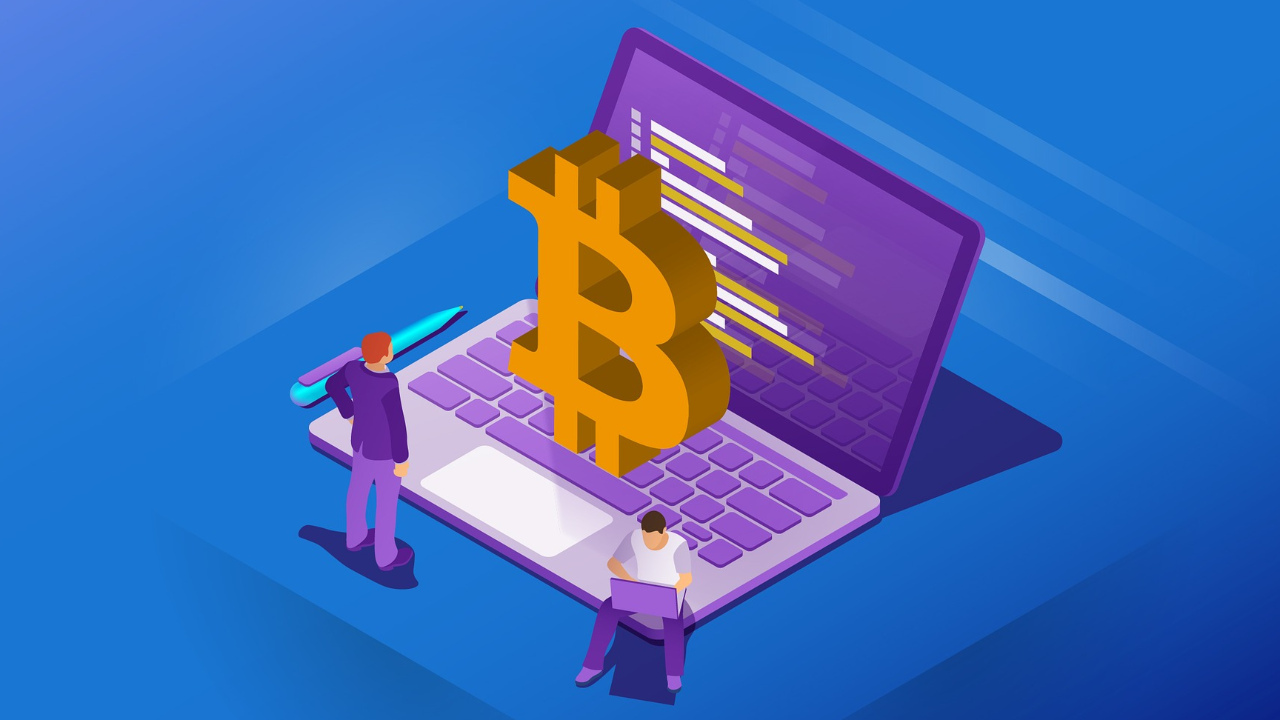 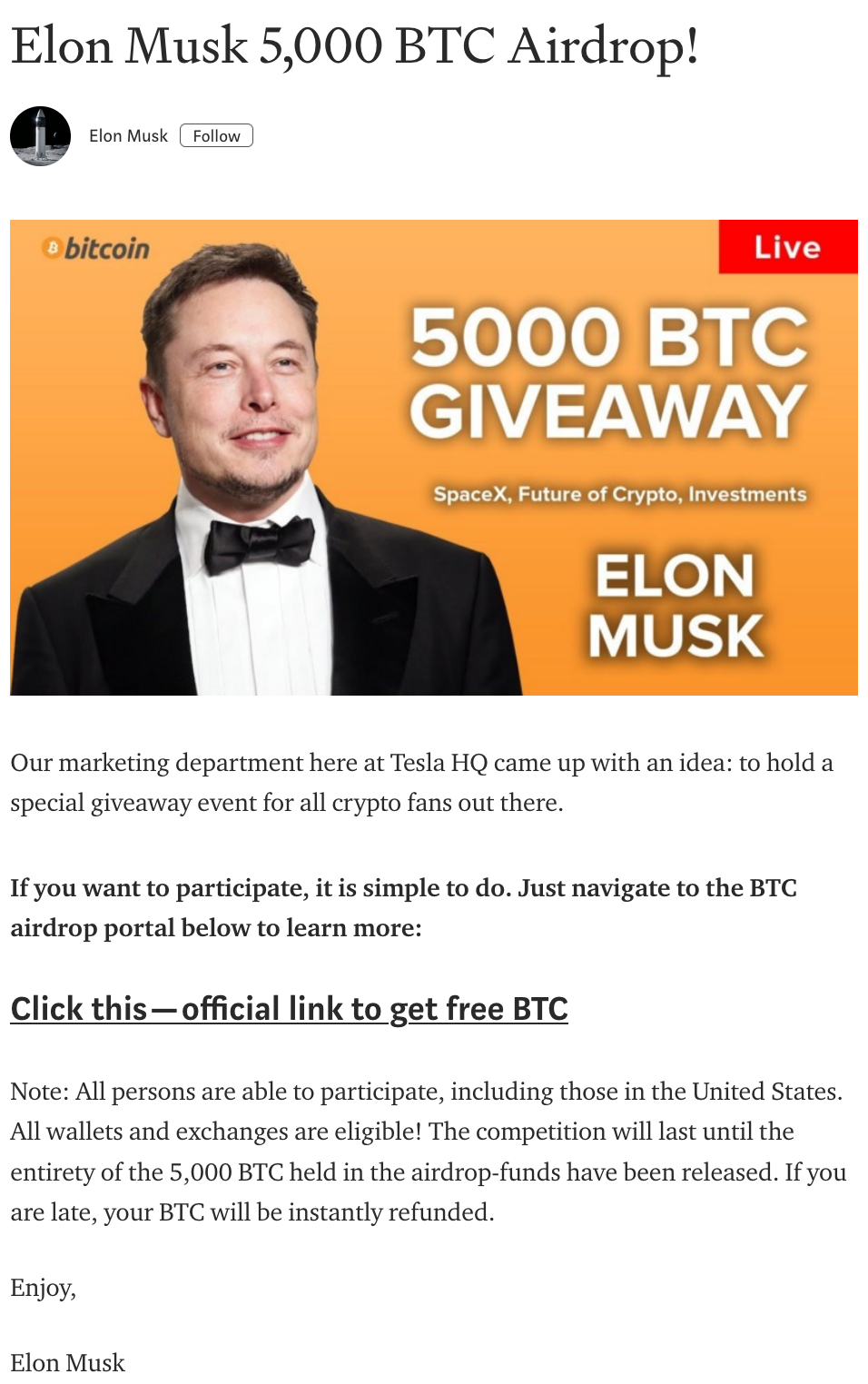 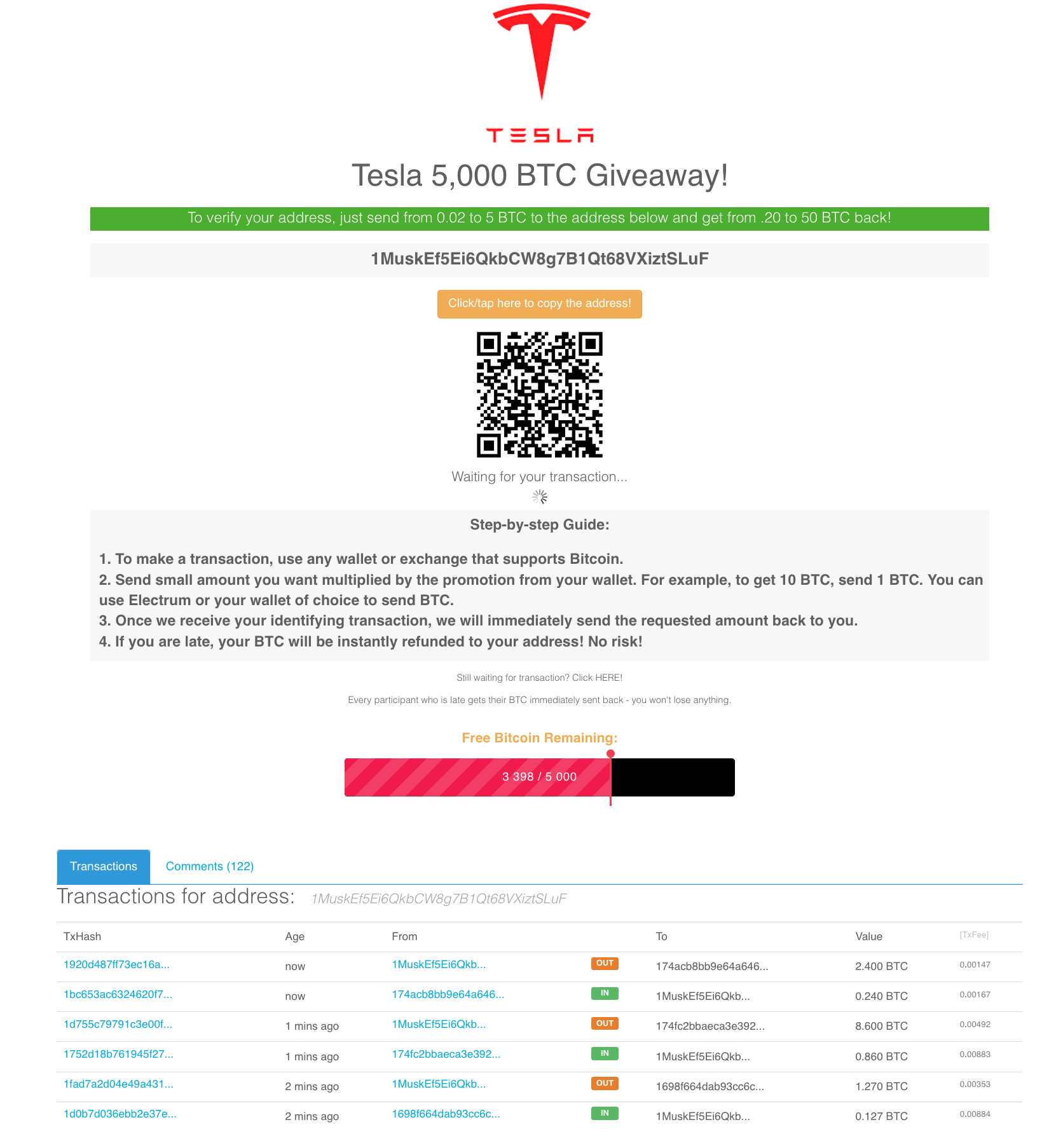